How to Master 3D in photography

​The impression of 3D in a photograph is important to instill a sense of animacy and draw in the viewer. Not all photographs benefit from it and abstracts are often more interesting when they appear flattened, for instance. But when you are looking for it, you don't necessarily have to sell your family to afford a lens with 3D pop. There are multiple ways to create an illusion of 3D on a 2D surface. Some classical such as the use of perspective and wide angles. Some less traveled, such as the careful use of blur or clarity. Let's dig into both.

​​Starting with the obvious 🙂 Use a wide lens with a large depth of field to photograph a subject with plenty of convergence and the result will always convey a sense of immersion. Below is a photograph made with a 24mm equivalent focal length lens at f/7.1. It depicts a narrow street in the shadows with all lines converging toward the well-lit middle. 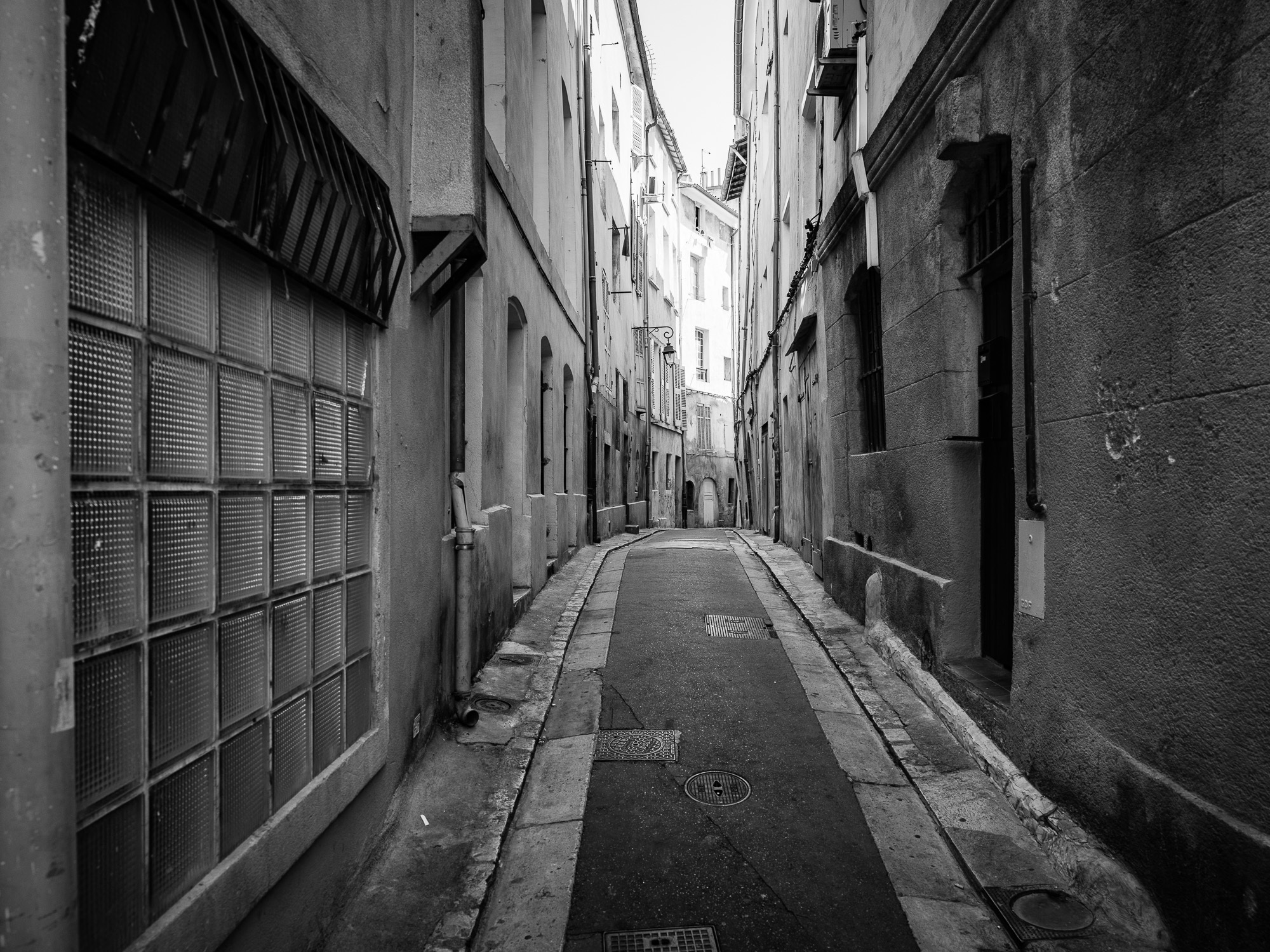 ​Here, the composition is creating the sense of depth. Since all is sharp, your eyes can follow all the way from the glass wall on the left to the end of the street. The center being well lit, it attracts the gaze, but the glass wall is also clearly visible, has contrast and detail, so it draws the eye back to it. The right wall is darker and less detailed, so you look at it far less often. The back and forth motion of the eyes from front to back of the scene is what created the sense of depth. Your eyes almost litterally walk up and down a street like a happy dog and experience the depth. If you move back far enough for your eyes to lose the details, it is ​mainly the very convergent perspective that creates the 3D. 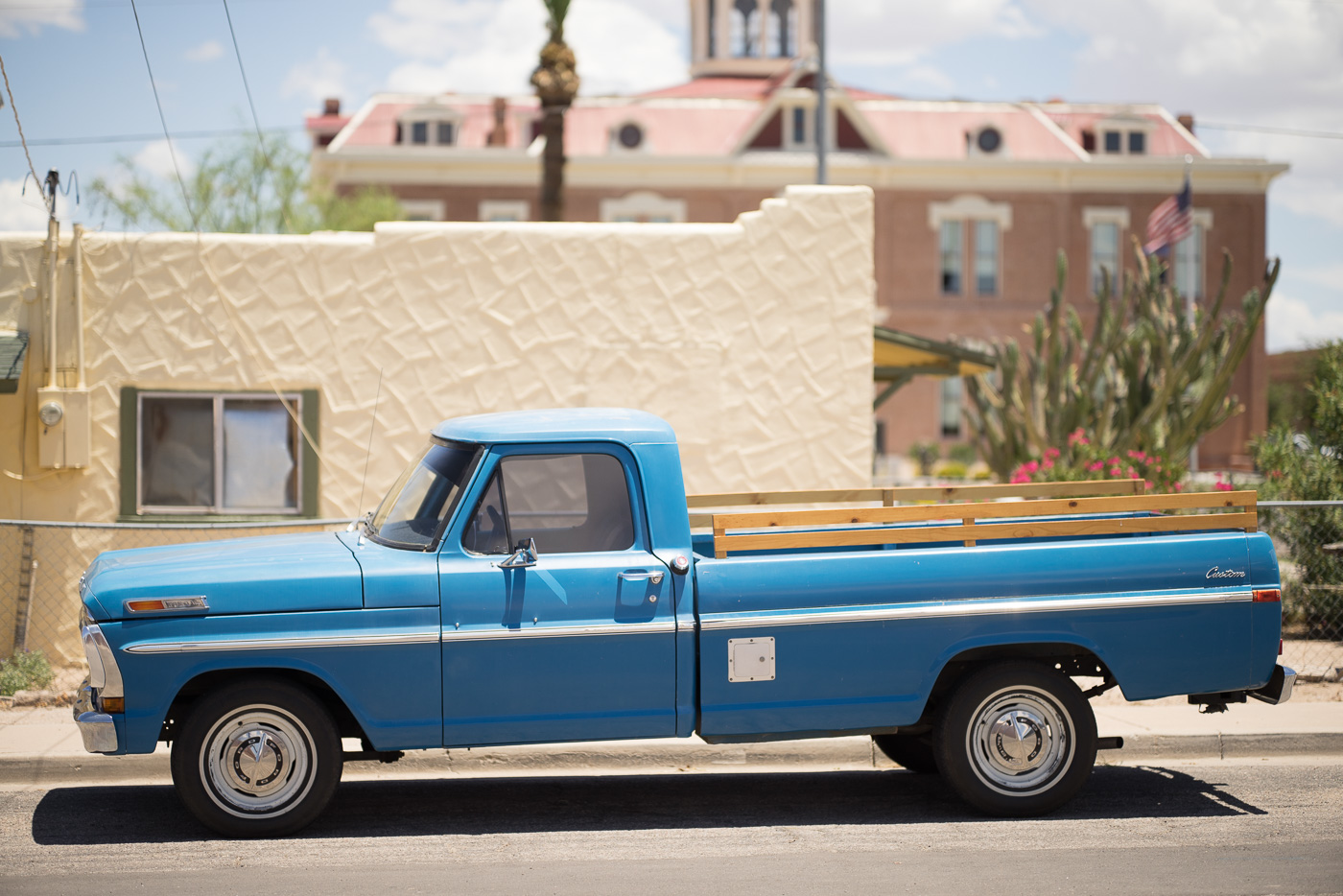 ​Two types of lenses ​have that magical pop. (Good) Old lenses, designed in less MTF-obsessed ​days, and in which the low number of lens elements doesn't rob the image of ​its life. See the juke box below. It was photographed with a Zeiss C-Sonnar 1.5/50 ZM. It's a very flat scene but 3D is almost palpable.The frames pop out of the wall and even the bbank notes have 3D. The website compression robs a bit of that feeling but it's still there.

​The second type is the highly-corrected modern lens that somehow manages to combine a large number of optical elements and high transparency/vibrancy. The use of special glasses, very high tolerances and very high-quality coatings on these lenses is what makes those lenses so expensive. In my personal experience, the Zeiss Otus 85 (car photographs, above and below) is the king of the hill at this 3D pop game.  But the Zeiss Distagon 1.4/35 ZM (aka Audrey) comes close as do several other lenses (Hasselblad XCD 90, some Milvus gems and, presumable a slew of others I don't know of in the Leica / Fuji / ... stables. 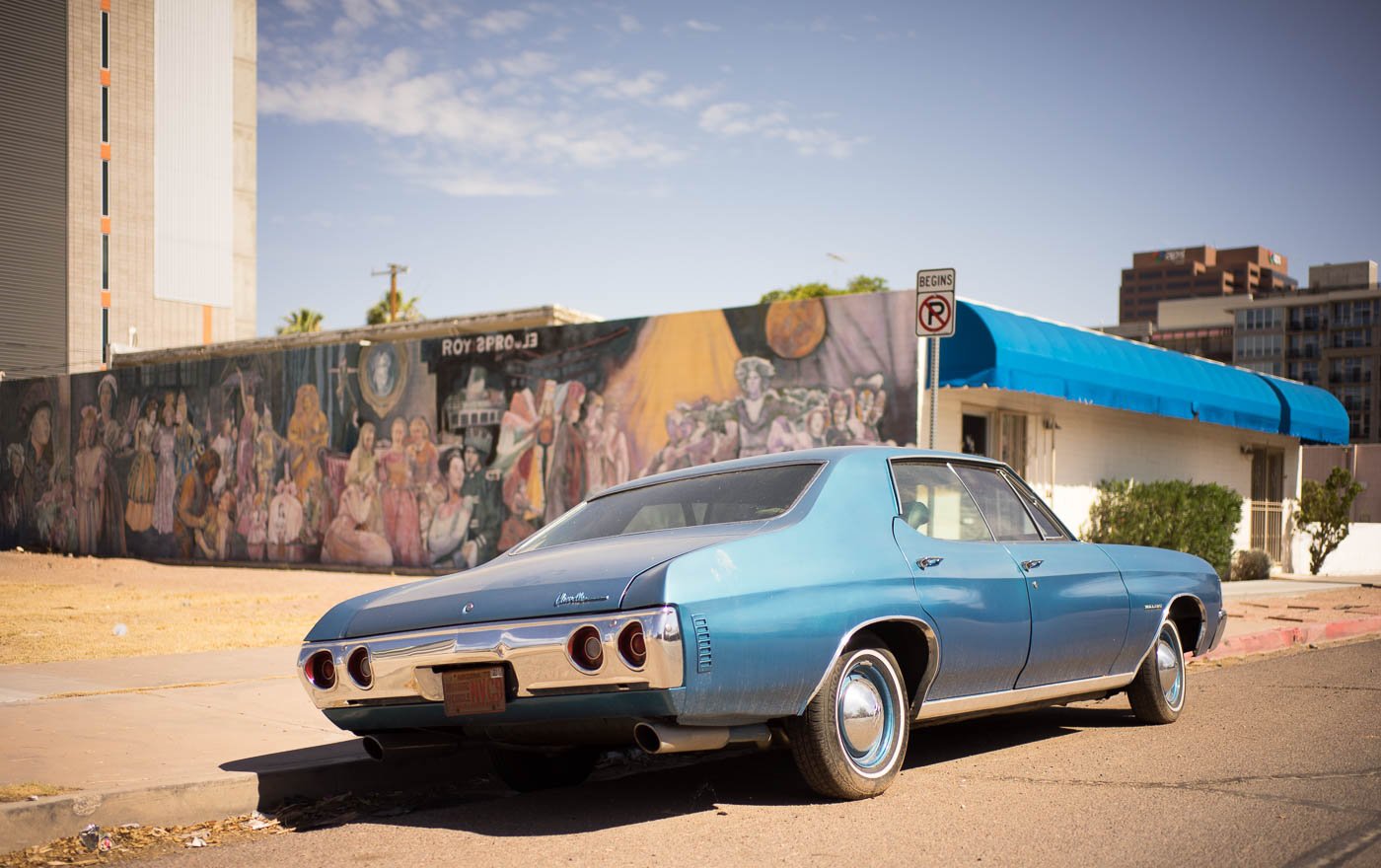 ​The photograph below was made on a 10 Mp camera using the cheap Mk1 18-200 kit superzoom. Not only does that lens have none of the high-expense luxuries mentioned above, it also compresses the scene significantly at the long end, as below. The sensation of 3D is created artificially in PP by sharpening the zone of focus and adding blur to the other areas. The further away from the focus plane, the more blur. This creates a very believable effect, although some zealots will send you to hell for revving up Photoshop.

​The quality of the blur is essential. This photograph used gaussian blur, ie blur that smoothes out detail more and more as you ramp up the slider. There's nothing wrong with using other types of blur for an artistic effect, just know that the 3D effect usually works better when the blur doesn't add anything and simply removes detail.

​We can all afford a 28/1.4 lens. But we can often simulate the look of one by assembling frames made with more mundane lenses. In the photograph below, a 90/3.2 lens was used and 3 frames were assembled to create the perspective and aperture of a shorter and more open lens (maybe a 50 f/​2 ??) The added resolution contribute to the sense of reality. The 3D is very natural and realistic. The blurring and blueing of receding planes contribute to the intellectual perception of depth as well.

​In a heartfelt do-as-I-say-don't-do-as-I-do comment, I would advise you to clean your sensor before creating the individual frames. If not, you will be treated to a garland of dust spots in your stitched pano ... Also, it's obviously best to start with a lens that provides a little bit of pop rather than a very flat one. The stich will increase the subjective feeling of immersion but it can't invent information that's not there in the first place.

​Let's expand on the post-processing blur idea. Let me steal a photograph from regular contributor Dallas ​to illustrate. 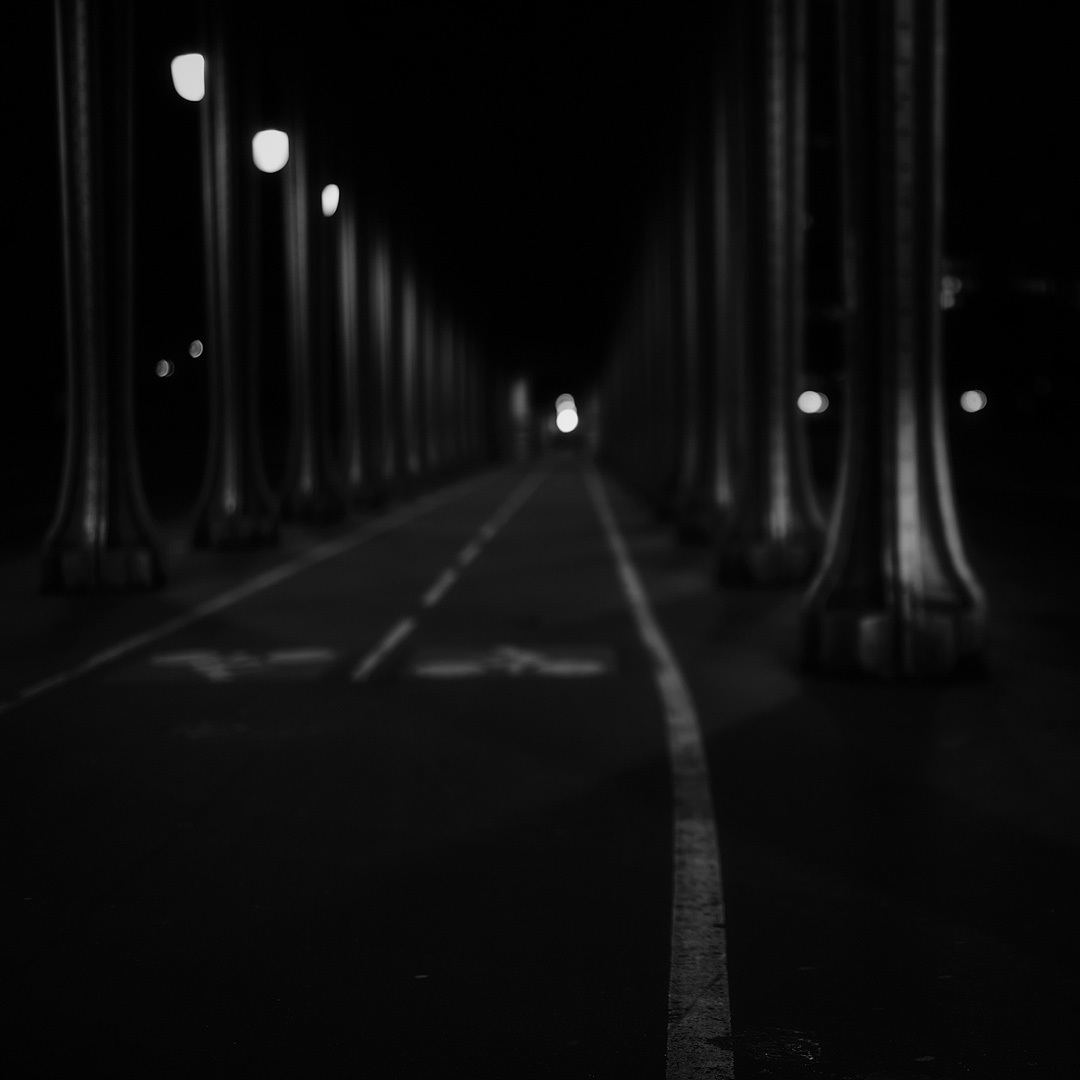 ​Blur has two interesting effects on how we percieve an image. On the one hand it robs us of the information that allows our eyes to create a 3D model of the object depicted. On the other, it ​​also​​ robs us of the information that ​allows our eye to ​​realise they are looking at a plane object​​. However hard we try, we always intellectually know that we are looking at a plane object: a screen or a print in most cases. And the information gathered by the eyes supports this. But when the eyes encounter blur, ​our perception has more difficulty creating a flat 3D model of the print in our brain!! This means that a blured image confuses our vision to the point that it no longer is absolutely sure it is looking at a plane physical object! If you look at the convergent and blurry photograph of Bir-Hakeim bridge (Paris) by Dallas Thomas, you will feel absorbed more powerfully that if the image had been totally sharp. ​​​

​Now clarity: look back at my alpine scene and examine the edges of the various receding ridges. The closer they are the more sharly defined they are. There isn't that much more detail but what detail there is is presented with more micro-contrast. As the hills reced into the distance, atmospheric absorbtion not only makes the image blue, it also flattens the light. You can reverse the process in PP by (gently) adding contrast to closer edges and removing some from distant ones, using local application of clarity. A similar approach was taken in the night fair photograph above. Some contrast and clarity were added to the shadows. And some were removed from the band in the highlights. You have to be gentle with that or the photograph will quickly look very artificial.​​

​Let me send you to this page on high-quality printing processes. Carbro printing is done in such a way that there is added thickness in the final print along the edges. Much like adding clarity, this creates a sensation of added presence on the edges that conveys a false impression of global 3D. This effect (local thickness creating global illusion) was heavily used by expressionist painters, who painted details on top of backgrounds, using thick paint, to create a vivid impression of 3D. Those details seemed to pop out of the canvas, somewhat. Using textured paper and a print process that enhances the tickness of edges both can contribute to your print radiating a sense of presence and animacy.

None of the above ideas should be taken to extremes. Photographs can soon look very gimmicky and unnatural when any effect is applied without subtlety. That's good to stand out for a couple of seconds in a crowded ​Instagram feed, but the effect doesn't last and viewers quickly bore of it. A combination of subtle effects is the best recipe for images that feel alive. And it's good to start with good lenses that don't immediately rob the file of all its life. Modern lenses that achieve very high transparency are - by necessity - complex and expensive. So don't shy away of the great oldies. What you lose in meaningless corner sharpness, you gain in vividness and style.