The concept of Wabi-Sabi is central to (some) Japanese aesthetics and separates it from what we Westerners have been taught to appreciate and strive for in all our undertakings : flawless perfection.

Tourists flock to Kyoto’s Zen gardens from all over the world. And the stone, moss and gravel creations do have a strong meditative pull, once you’re up close. The concept of ideas emerging in a sea of pure consciousness and sending ripples out to one another is indeed mesmerinsing. Contemplating such a garden is like watching your brain fire in (ultra) slow motion. It makes the ideas of mental peace vs turmoil very palpable to all but the most indocile visitors.

But there’s something else hidden in plain sight in this image : the decay on the ocre walls surrounding the garden. These walls play as big a role in the powerful experience of the garden as anything else within their boundaries.

Loosely translated, these two terms (the meaning of which has – fittingly – changed over time) correspond to the following concepts :

Together, they form the basis for an appreciation of the imperfect, patina, decay, understatement … In the Zen garden, the gravel, moss and stone illustrate Wabi, while the decaying walls reflect Sabi.

I ate in this wonderful restaurant in Tokyo. Nestled right below the Tokyo Tower landmark, it offers kaiseki-ryōri (the local equivalent of our haute cuisine, consisting in ten or more small dishes each highlighting tremendous skill in preparation and presentation) in a dreamlike setting. The restaurant is only 14 years old and, given the cost-no-object project its creation was, the owners could probably have hired any architect in the world to design a stunning new building out of steel and glass. The sort of architecture Juhani Pallasmaa assimilates to hubris and the refusal of our own mortality, buildings that do not age. What they did instead is move a 200 year-old house from another part of the country and built an exquisite garden and set of pavilions to complement it. 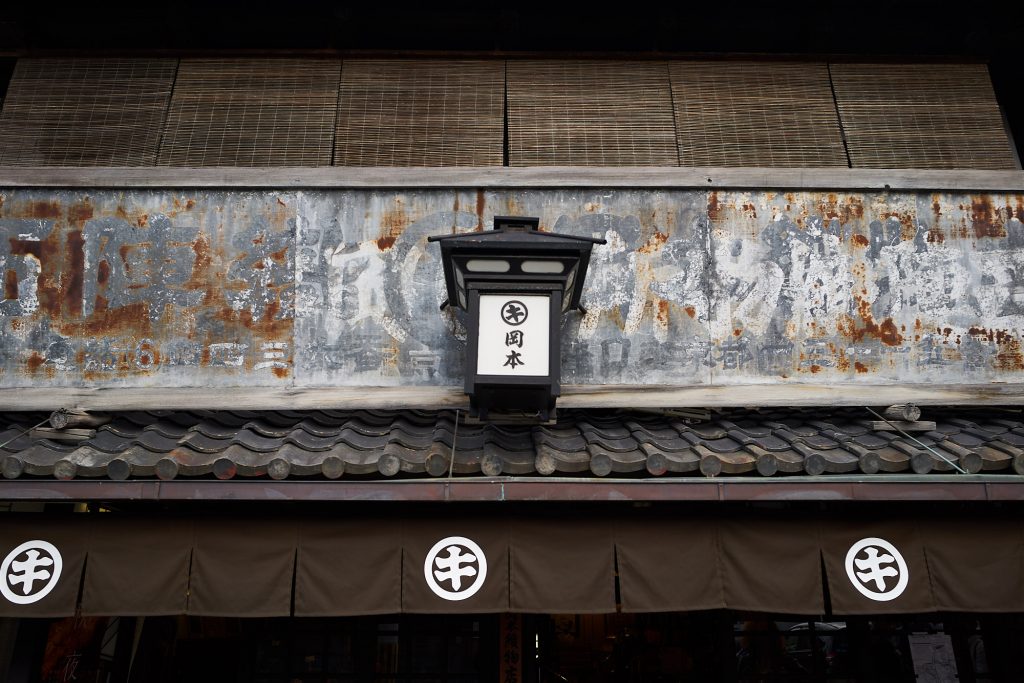 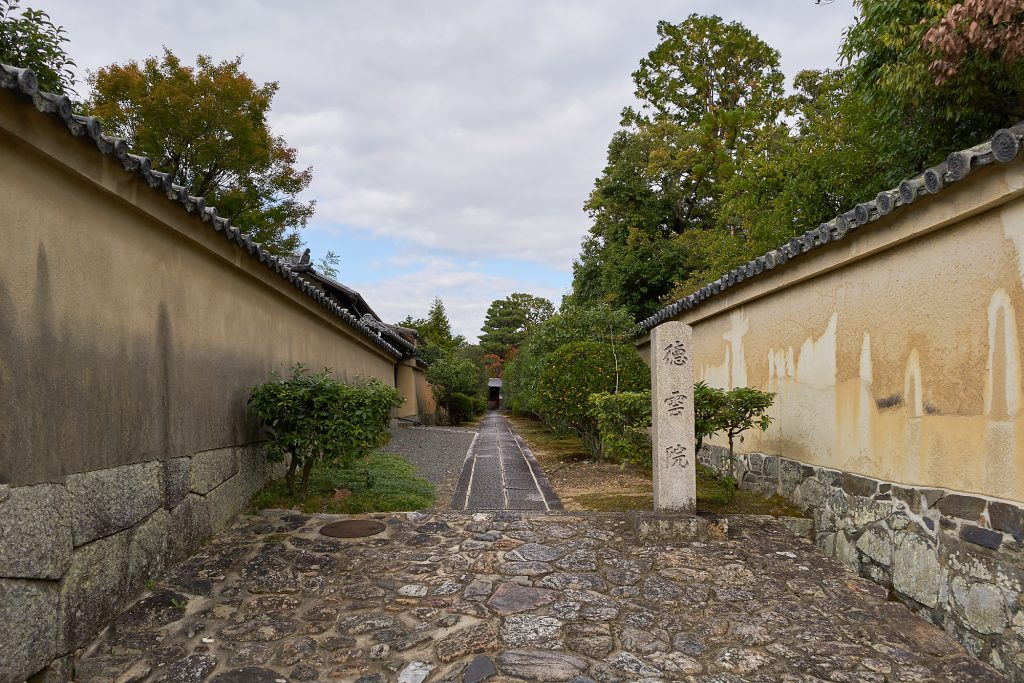 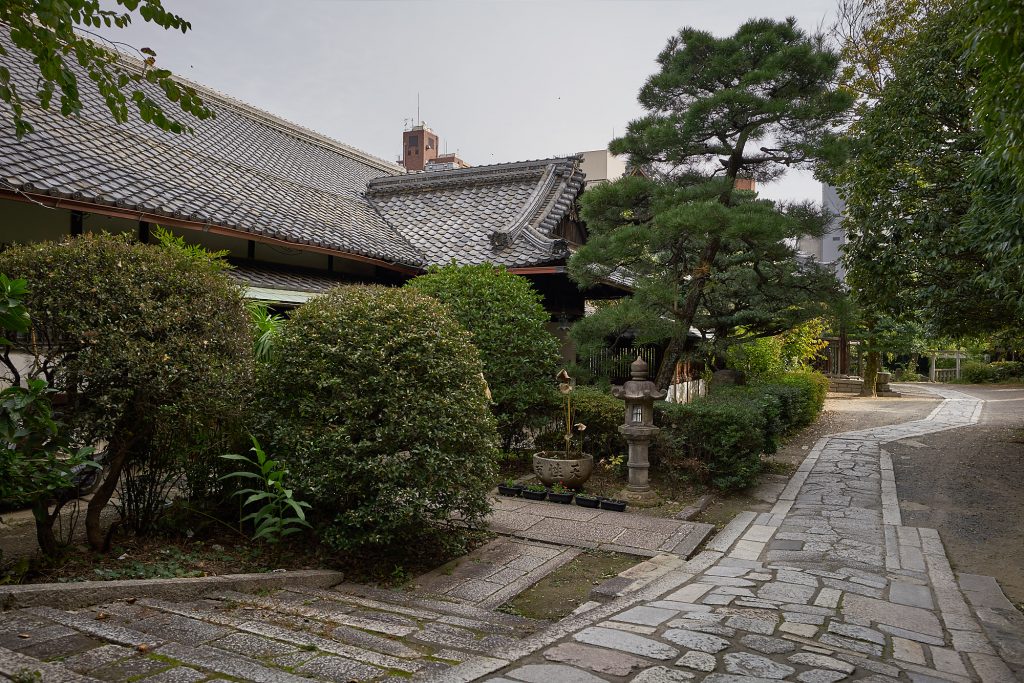 If an object or expression can bring about, within us, a sense of serene melancholy and a spiritual longing, then that object could be said to be wabi-sabi

Wabi-sabi nurtures all that is authentic by acknowledging three simple realities: nothing lasts, nothing is finished, and nothing is perfect.

So how do you capture / honour that in your photographs ?

I suppose step one is to recognise it in the creations of other artists and architects, as in the photographs above.

But that hardly seems enough. It’s like photographing graffiti. If you’re only documenting and not adding your own interpretation, is it really interesting/meaningful/art ? Probably not, and step 2 would then be to recognise wabi-sabi aesthetics in subjects that don’t purposefully cultivate it. 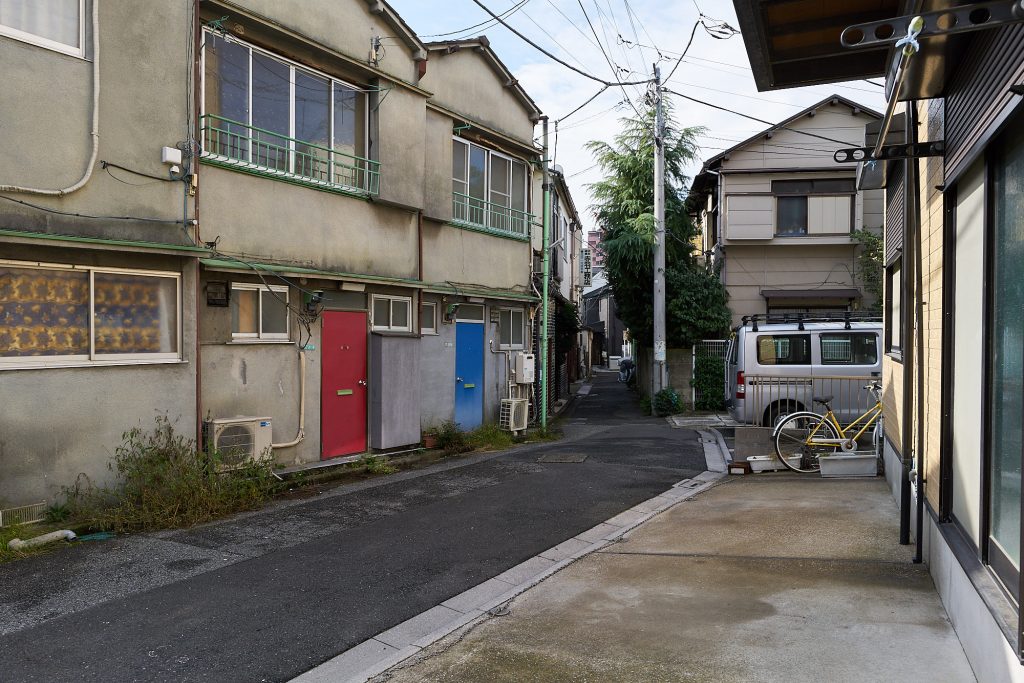 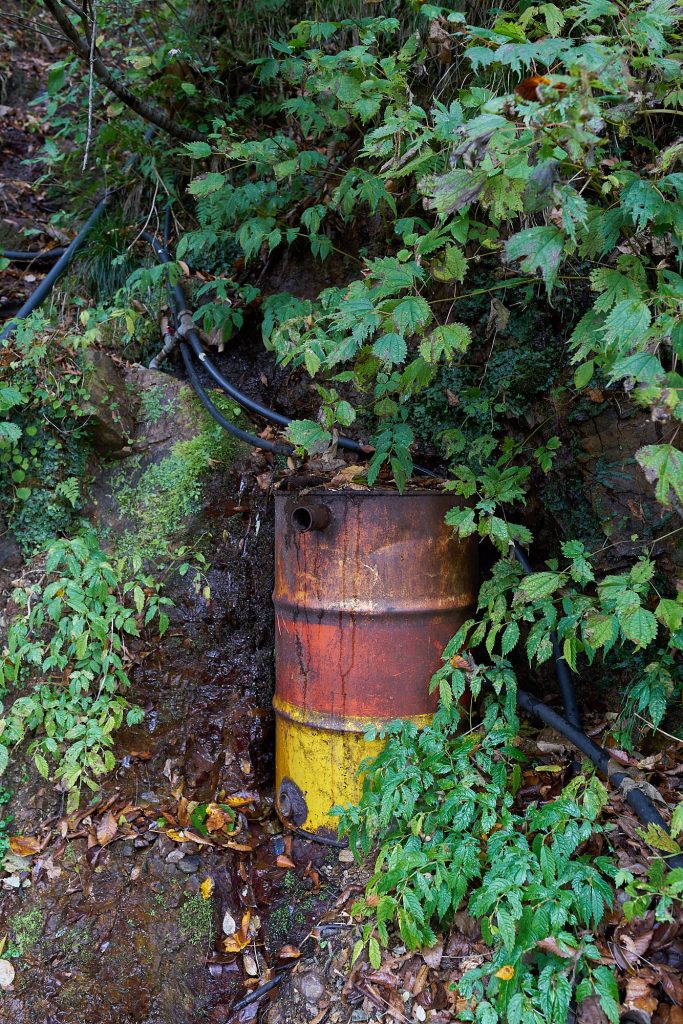 Even that, though, falls slightly short. At least to me.

Turning back to Wikipedia, we read that [Wabi – Sabi] is a concept derived from the Buddhist teaching of the three marks of existence (三法印 sanbōin), specifically impermanence (無常 mujō), suffering (苦 ku) and emptiness or absence of self-nature (空 kū). That’s more helpful. Although, to use the sentence in a pragmatic manner is more about not doing than doing.

Case in point. I recently visited a Christopher Thomas exhibition (Lost in LA) at the Hamilton Gallery in London. Some absolutely wondeful photographs, such as this Mc Donalds I. Oh, how my hand twitched over my credit card. Until something unsettling stopped me : the framing of the image by a border of chemical reaction that hints to hand silver printing but is really a photoshop layer. I mean … the image would still be superlative without it and it just adds a sense of unnatural pretense.

Chemical prints can be the epitomy of Wabi-Sabi, particularly in traditional processes such as platinum printing and – better still – made from collodion process plates (Sally Mann, anyone?), because of the systematic glitches and mistakes that creep up here and there, making two identical prints an physical impossibility and a flawless one only possibly via spotting and intense retouching. 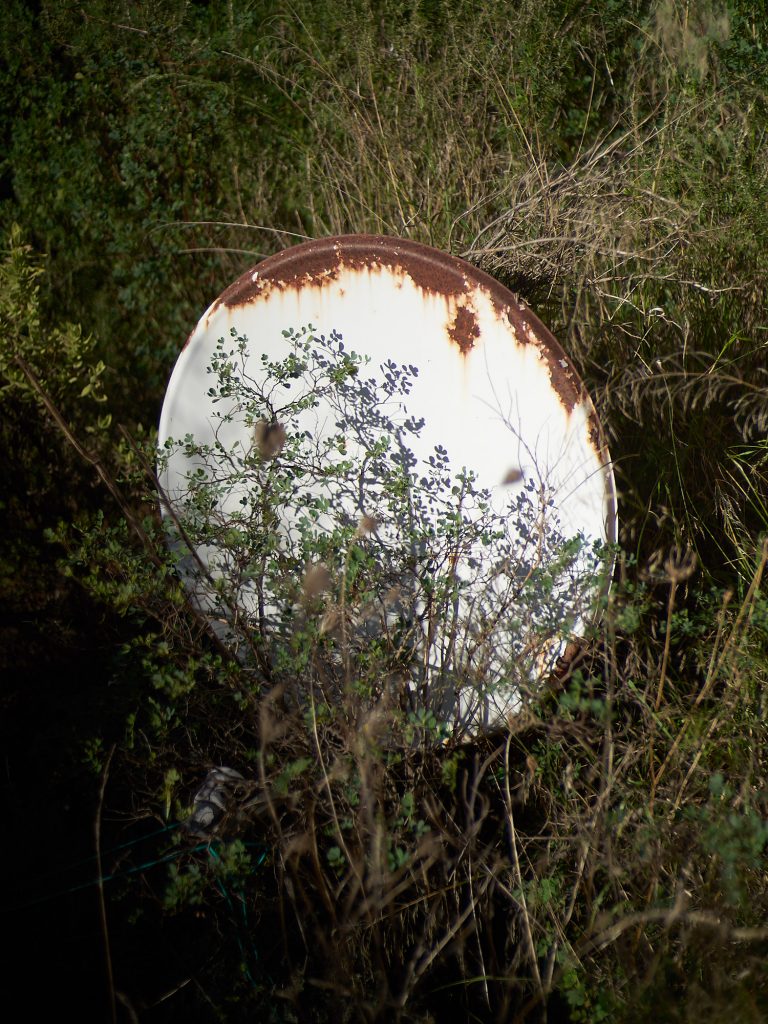 Implicit in Wabi-Sabi is the notion of loss. Only when you give up something do you really step into that realm. A realm that is so diametrically opposed to (literally) **everything** we are taught in our hobby :

Contrast that with this photo by Adam Bonn. 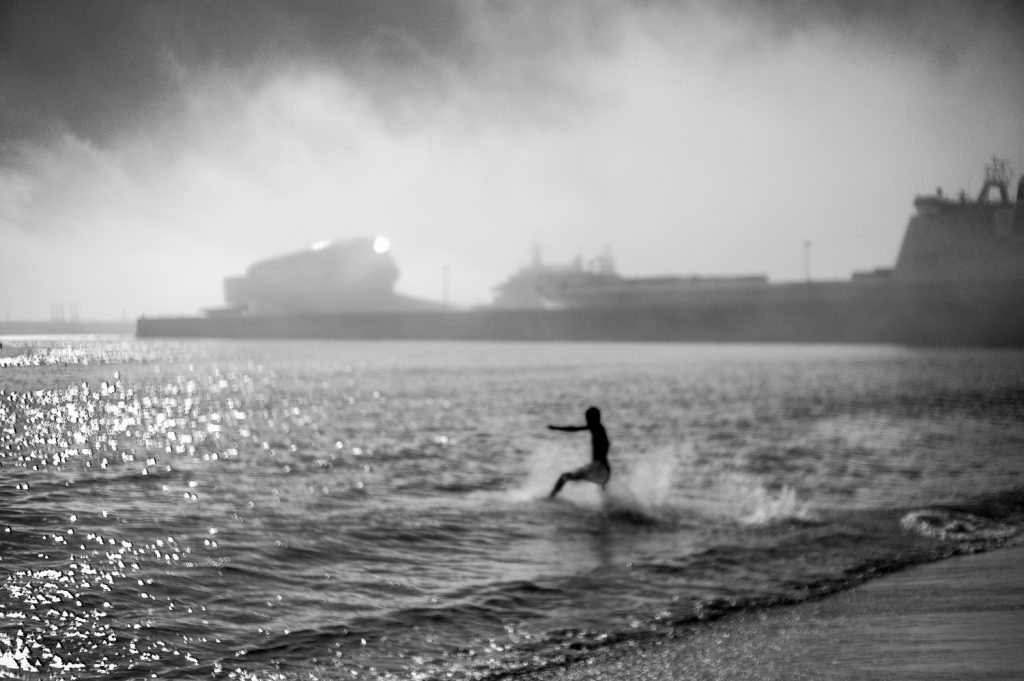 …and into the Sea

Or this one by Adrian Turner : 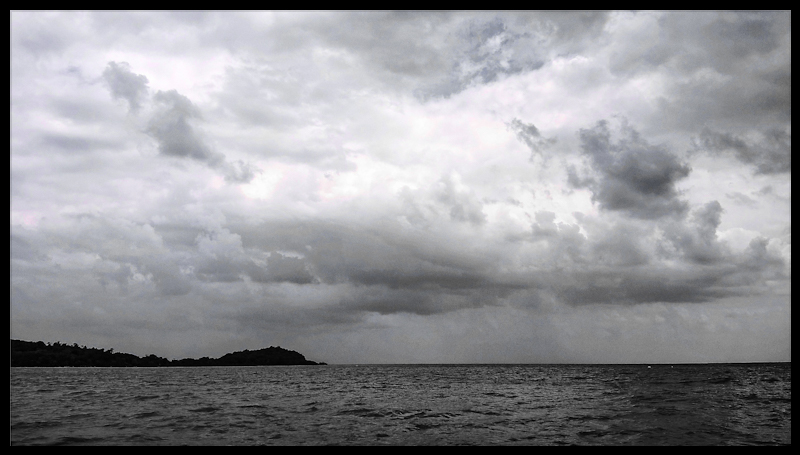 There’s nothing either can do, whatever amounts of money, time and effort they throw into it, that will make those photographs sharp. Not ever. Loss, right here before you. A choice was made, an artistic decision to go for a certain look or a certain process rather than strive for some abstract notion of clinical perfection. There’s no way a 7Artisan lens or an old phone will ever produce perfect photographs. And there’s no way perfect photographs will ever have that charm and pull.

And I don’t want to hear “preset” at the back of the class. That won’t cut it. Creating a safe picture that can be altered in post to look like it was designed to look a certain way (then can be processed completely differently the next week) just doesn’t cut it. Not in terms of Wabi-Sabi, at least.

But that doesn’t mean we can’t try to approximate …