#733. Monitor calibration for the truly un-gifted

This is a guest post by Chris Stump about a topic we too often brush under the carpet. The author is a former colorlab owner living in mid-coast Maine with his wife and young son. He attempts to navigate the post-film world on a fickle DSL connection, and posts photo related observations on chrisstump.com. Thanks Chris !!

<tldr; > Apparently custom monitor/printer profiles should be used *only* for printing, and I wonder why it’s not mentioned in tutorials, and think densitometer documentation should warn about this as well!</tldr;>

I recently decided to really tackle an issue that has been plaguing me for some time…which is that after calibrating my monitor it is too dark to enjoy using. What follows is my related rant and voyage of discovery looking into this issue. I’d love to hear if you folks have any similar experiences and/or hopefully some solutions!

Photographers like myself who consider our final product to be a fine art print are admonished by the industry that, much like the first step in being Instagram-famous is ‘be pretty’, the first step in making truly good print is to ‘calibrate your monitor’. And, like most, I take it one step further and do a full closed loop monitor and printer calibration. I happen to use an X-Rite ColorMunki.

I expected that a pro calibration system would first go through and tweak my monitor’s brightness, contrast, and white point. Basically do the same thing an OS monitor calibration does, but with the accuracy of a densitometer. And, I expected that from then on websites, YouTube videos, movies, other people’s sites, and my own, would look vibrant and detailed and rich and, well, accurate(*). Then, after a printer calibration I also thought that a file sent to my printer via the newly created ICC profile would result in a print that was as close as possible to what I saw on the screen, given the difference between transmissive vs reflective media, inks, papers, etc.

After the process was complete [and I’ve done this a dozen times] my resulting monitor profile darkened and warmed the screen by about two stops and 1000 degrees K. Below are examples. One note first of all…I took these with a phone right from the screen so that you could see what I mean. For some reason, and maybe this is a hint of something I’m still missing, the CMD-Shift-3 screen grabs on my Mac of both scenarios appear identical. Huh. Another player enters the octagon. 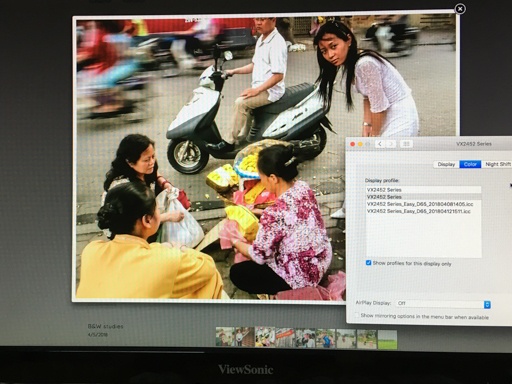 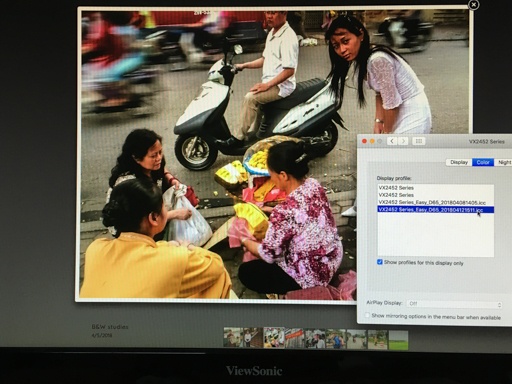 ​[all examples in this article are by the author]

As I look at them here the differences don’t jump off the page, but believe me, in daily use there’s a big difference. Post-calibration my prints looked fantastic, but web pages and YouTube vids were dark and muddy. And edited files that had printed so well looked very light and washed out when uploaded to my webpage [since they’d been optimized on such a dark, warm monitor.]

What am I missing I wondered?

I assumed once my monitor was officially calibrated it was perfected to some standard I didn’t fully understand, and then my printer was calibrated to be faithful as well. OK, but what did that mean, and why was my new, perfect, monitor calibration essentially useless for day-to-day use. I didn’t know.

[Back in the day I used a TRD-60D densitometer to calibrate my RA-4, E-6 and C-41 processing machines daily, so I do understand the basics…but I was out of my depth here, apparently.]

Based on the empirical observations above I finally started using the calibrated monitor profile *for printing only*, and then I’d switch back to a simple OS calibrated monitor profile *for everything else*…and this meant I created two versions of any file I wished to both print and post…one file optimized with the darker printing profile, and a second using the lighter ‘web’ profile. What a gigantic PITA.

And, turns out this adaptation likely was not a workaround of something that was broken in my system, but rather it was the only way this stuff was going to work. Huh. How I confirmed this was to call X-Rite. The guy there was all like, yeah, no sh!t Sherlock. [I paraphrase].

To be fair he said: “If you have to post images to the web and need them to look the best that you can (I fully understand why you would) as well as print them accurately, then you may need to continue to use two versions of the same image.”

The one suggestion that he and also the eminent Ming Thein had in response to my emails was that some browsers, Firefox in particular, were more ‘icc aware’. Well great. Should I, as was suggested, post a banner on my site saying “best viewed with such-and-such browser”, à la 2001? I think not. I was able to prove to myself how limited the value would be of that approach. Below are screenshots…one using a current version of Chrome the other Firefox. Do I see a difference? Yes. Does it reverse the calibration changes and make my printing profile match my default profile? No, not at all.

One of these is Chrome and the other Firefox. I believe in that order, but the results are too similar for me to bother confirming. 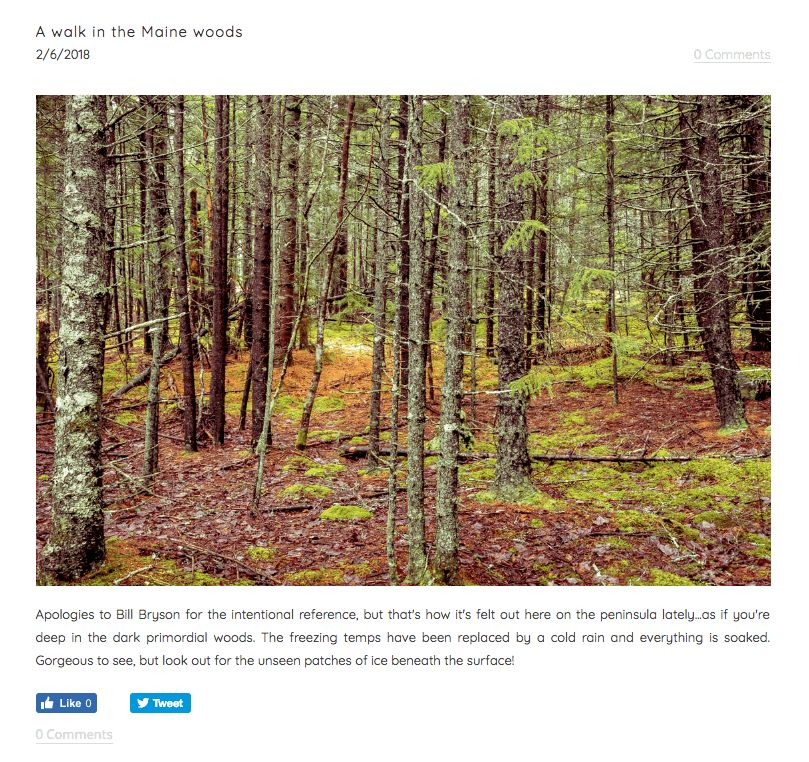 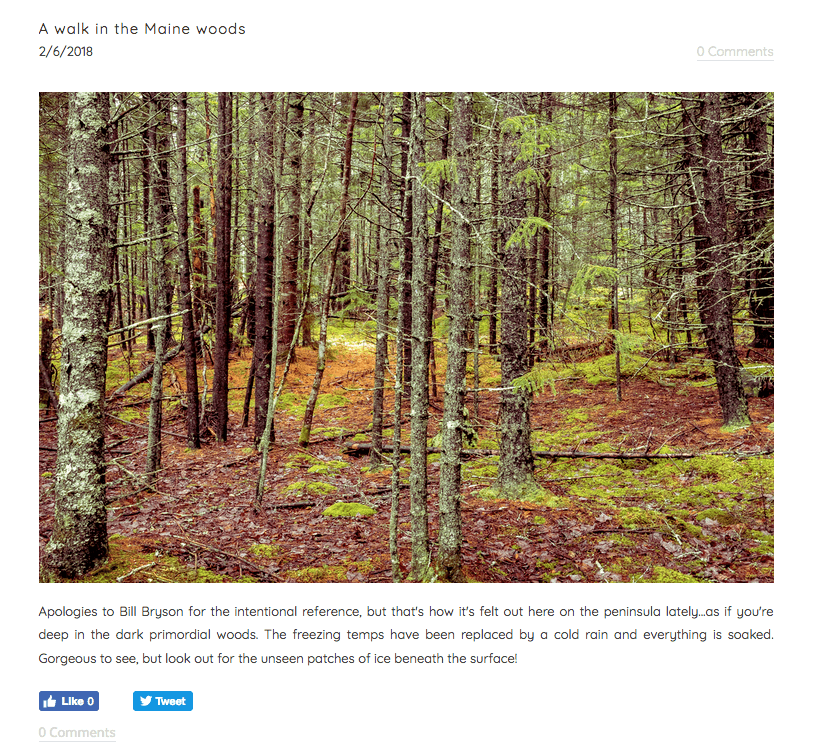 It appears that the accepted workflow is that when printing I’ll to go into Preferences, change my monitor profile, and then create a new version of files I wish to print based on this dedicated [darker in my case] profile. And then remember to change back to the ‘web’ profile for other work.

So, my next question is: Why has no tutorial ever shown this flip, back and forth multiple times a day between the printing monitor profile and the web one? Or advocated for two monitors, one for web work and the other for printing? Why is there not some easy toggle in my taskbar or somewhere making this switch more simple? Why is there not a menu item in LR to ‘make virtual copy with [web or print] values’ [and a preferences setting for the default mode]?

Is it because no one really prints anymore? Or is there a more simple solution here that my admittedly *late to the game* analysis has yet to pick up on? As Craig Ferguson says, “I look forward to your letters!”

Most humbly yours,
–Baffled in Maine