#728. Every story tells a picture – American girl in Italy, Florence

Last week, The Eye of Photography published the very interesting article Ninalee Allen Craig, the beauty in Ruth Orkin’s famous photo of Florence, dies at 90. The photo in question is below and, instead of publishing the link in our weekly list, I wanted to discuss it separately because it encapsulates so much that is fascinating in photography, some of which has occasionally been discarded since then. And what better place to do that than in our long neglected series “every story tells a picture”? Onwards! 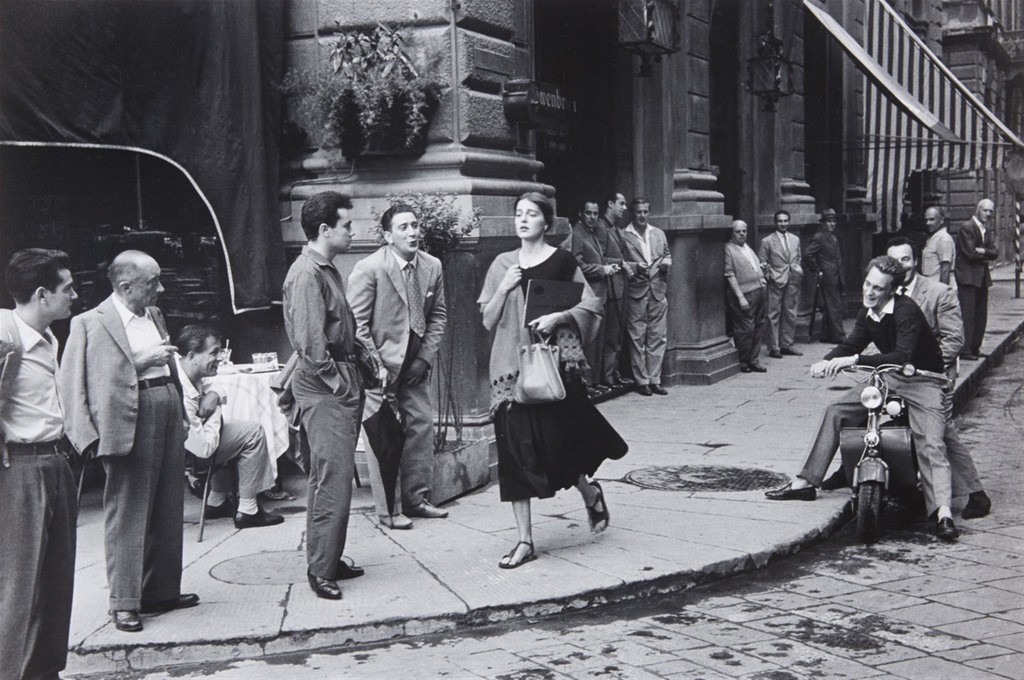 With lesser photographers, composition tends to be either forgotten, the spectacular subject being all that matters for social likes, or very convoluted in a “look how clever I am” sort of way. Here, Ruth Orkin makes it look so easy and natural that it almost looks like no thought was given to composition at all. But it is so well done and powerful …

Let’s start with the “American girl”, model Ninalee Allen Craig, almost dead center (rule of thirds? yeah, right) This is a real scene (although a second pass) and waiting for the model to be absolutely in the center would have taken her too close to the 2 guys on the left. But to all intents and purposes, she is dead center. She is the subject of the photograph. And in a very crowded scene, she overlaps with no one and nothing competes with her for attention.

In fact, the parallax from a downward facing lens creates focusing lines that all lead to her and pin her down to the floor.

Then, there is that almost unbroken diagonal of men, again incredibly well spaced out with no overlap but several planes deep, bellies sticking out, hands holding crotches, and every glance turned towards the model, each stare acting as a vector pointing you back to the middle of the frame, and the model’s face. You could add a cage and chains, the model would not look more trapped than she is by that very natural and intelligent composition. Where the diagonal breaks, there are only walls and pillars. The right of the image is blocked by the guys laughing on the moped.

She is alone, she is a woman in a world of men. And there is literally nowhere to go where she won’t be eyed like a piece of meat.

Don’t know, don’t care. But this level of connection to the scene requires gear that doesn’t get in the way, that’s for sure. No custom buttons to compensate for criminally lazy UI design, no laggy shutter release, no laggy EVF (no EVF in 1951, I hear you brother), no 20 fps rifle, nothing intrusive. Just a good viewfinder, a focus ring and a positive shutter release. Something really hard to buy today, even if you’re willing to pay the price …

Soo, Italian men. Pigs, right ? Wrong !!! Read the article linked to at the top and you’ll come to this paragraph :

… To me and other interviewers in recent years, Craig insisted that the photograph from Florence had become misinterpreted. “At no time was I unhappy or harassed in Europe,” she told me in 2011. Her expression in the photo is not one of distress, she said: Rather she was imagining herself as the noble, admired Beatrice from Dante’s Divine Comedy.

“Italian men are very appreciative, and it’s nice to be appreciated, …”

So, yeah, how men “appreciate” women has probably changed for the better over the years, in Italy and elsewhere. We rarely hold our crotches to respectfully signal appreciation for beauty these days, right 😉 But that is irrelevant to the real story being told in this photograph, which is a game, a dialogue between the lone noble stranger and the local men. An assertion about independence, freedom and self-determination. Nothing like the oppression some commentators have suggested in the past. And I’m sure the composition would have suggested far more tension than this if the subject had been about harassment. Here, the perfectly balanced composition uses the men as a frame for beauty more than anything else, a jewel case, almost.

Obviously, the photographer, a friend of the model’s, had to know this. So the composition is a pure creation. A radical departure from the reality of the moment. A personal choice. Which, as I keep writing to much disapproval, is the case with 100% of all good photographs ! Wanna become a great photographer ? Forget about gear. In particular, forget about gear that guarantees you’ll get the shot. And focus on creating the shot yourself rather than surrendering all decisions to algorithms designed thousands of miles away by people with zero understanding of how you photograph, what you enjoy, how you see the world …

All in all, “American girl in Italy, Florence” is one of The Greats, because it is all about making a choice and bending all the rest of the process to your vision. Squander thou not thy talent on gear and likes, but focus on choice and composition. I have spoken.