#713. Does serious photography have to be obnoxious ?

So, dog years are nothing. It turns out 7 days in Scotland is worth 100 photographic years in most other places of the world. If you want to live long and prosper as a tog, may I suggest a trip up North for a bewildering variety of themes and locations ? Great (as in really great) food and fun people really don’t hurt either ! But this is a topic for a coming series of post. Today, let me don my No-No doctoral face, deplore the attitudes of some photographers and share a few personal thoughts on how to avoid them.

So, first stop, the Fairy Pools on the Îsle of Skye. This is what you could call a popular destination. Unavoidably, you’re not the only one around visiting and enjoying the great outdoors in the foothills of the Black Cuillins. Which leaves you with 4 options : 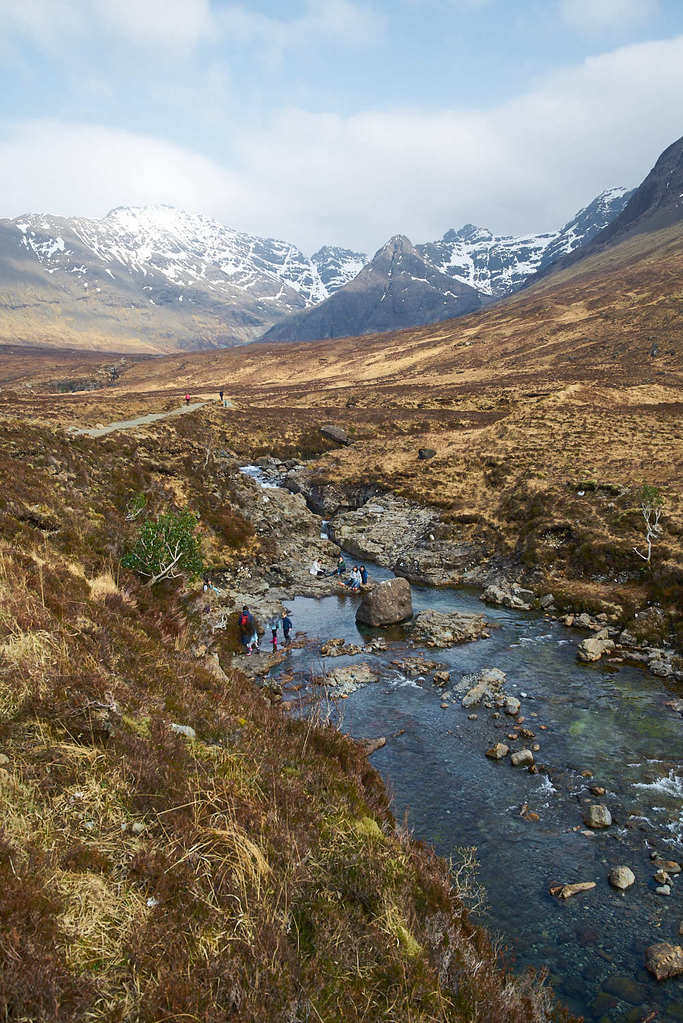 Option number 4 was the one chosen by this one guy dressed in bright orange, who was huffing and puffing his anger at the other visitors making the most of their afternoon out and occasionally appearing inside his viewfinder, while he was so deliberately prancing about in everyone else’s by standing right in the middle of the stream.

Also (and possibly worse an offence to the Universe), his lady friend, the sort of bonnie lass (yes, this is Scotland) you usually only see in films, was waiting, sitting on rocks and obviously bored to the teeth while he fumbled with his tripod and huge camera in the water in search of the perfect long exposure. For her, the tog-years thing seemed painfully real, I could almost see her hair turning grey in real time !

Whatever the hidden reason for her staying there, he was being an immense dick to her and other photographers. The problem behind this that he obviously thought his photography was serious and important (enough to act in that way). 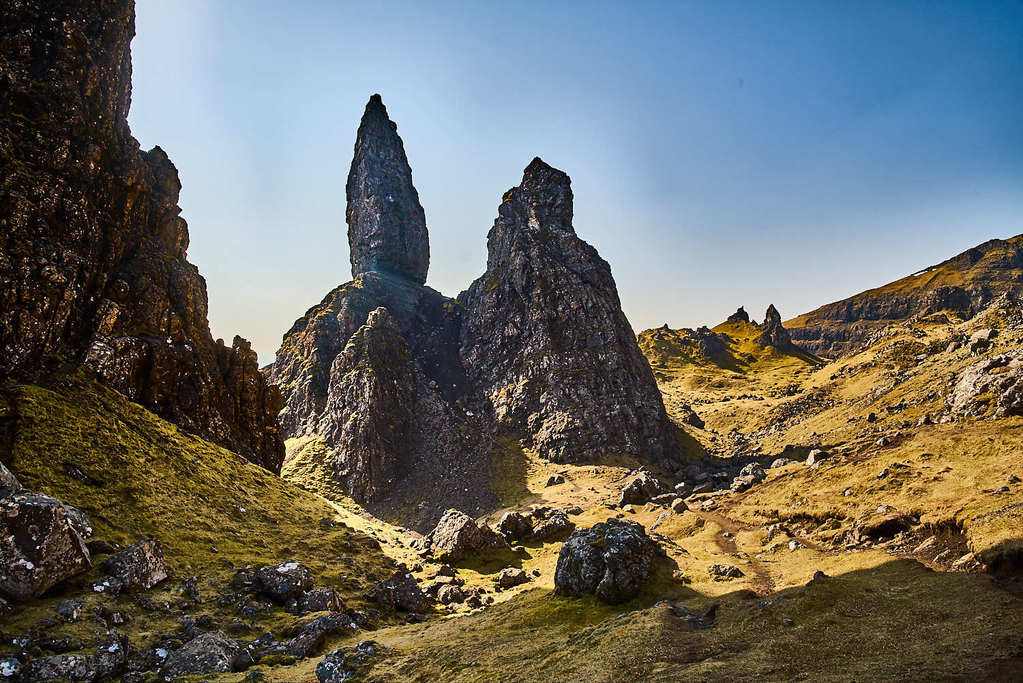 Plenty of people about, once again, but this is a big place and the scale of the rocks makes visitors so small in comparison that they are easy clone out (unless you are using the woefully unfathomable Capture One clone tool, which produced the amusing results in picture number 2 on this page) Or you wait a little and find moments with no one in the frame (as above).

It’s a great place to be. The (relative) sense of achievement after the climb, the high-energy landscape, the surrounding scenery, the wildlife, the pure air … all conspire to make this a heaven for hikers, birdwatchers and photographers alike. 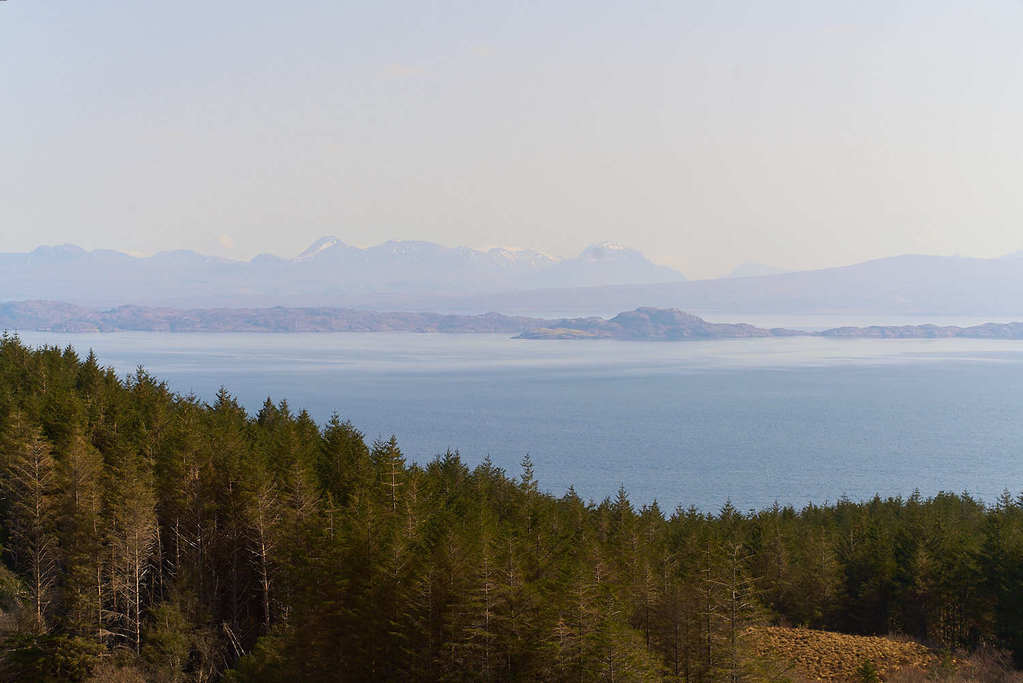 Until the drone brigade set loose their hellish machines. Who let the drones out, who, who, who, who ? Yeah, because why walk up when you can pester everyone’s life wih your noisy toy instead ?

One of those is loud enough to shatter the silence in a 300m radius. 2 or 3, and you’re good to mess up the experience over the whole site, which is efficient party-pooping by any standard ! Kudos. It’s also infuriating to those who enjoy the presence of wildlife and devote time, money and effort to preserve it. Over our 30 minute stay at the top, we saw a Sea Eagle, Buzzards, a superb Ring Ouzel, Rock Pigeon, and a host of other little birds (wheatear, wagtail, …) This is a very rich area for wildlife and it doesn’t take a PhD in alpine ecology to guess what impact drones will have on the local bird population.

This is how nearby tourist hotspot Eilean Donan Castle deals with the situation (albeit probably for economic reasons, not wildlife protection) 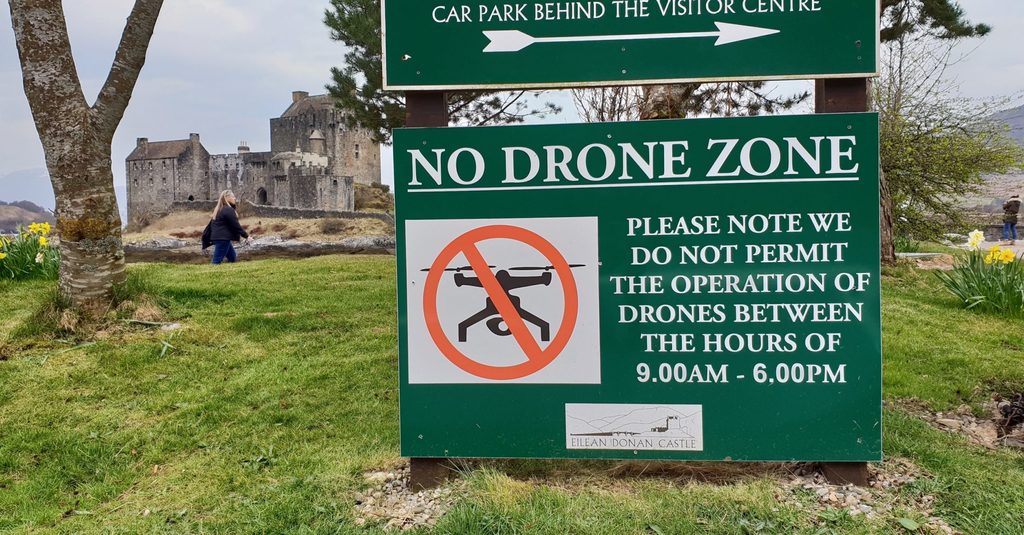 It baffles me that Skye, regularly at the center of tourist overflow polemics, wouldn’t enforce a similar policy to protect its nature reserves from the nefarious biddings of drones.

And judging by the reaction of other peace-seaking hikers at the Old Man of Storr, I’m guessing an EMC shooting stand at the entrance would bring in giggles and money aplenty. I’d pay for that. Wouldn’t you 😉 ?

Now, don’t get me wrong. There’s nothing wrong with long exposures or drones. In my living room hangs a long exposure photograph of a stream made in Scotland by co-author Bob Hamilton. It is one of my treasured possessions. And I would dearly love to own a drone as there are many situations where having the camera slightly higher than my hands can go would be super precious.

But there’s a time and a place. And an attitude.

I’m very aware that, simply by getting to those places, my own environmental contributions have not been overly positive at all. Look who’s talking, right ? But, throughout my whole life, I’ve tried my best to contribute to the security and welfare of nature in other ways. And, far more importantly, this is not about condemning travel or having fun in nature but recognizing that, when the negative impact of one person on the environment or the amusement of others is greater than that of a hundred “normal” people, maybe a line should be drawn.

It’s like those jetskis you can hear and feel profound, visceral hate for from a gazillion miles away. One person having fun. Ten thousand others not. And a disturbance in the force for thousands of fishes trying to live their daily lives beneath and around the turmoil. In Nice’s Baie des Anges, or any other busy, loud location, why not I guess. But in a secluded desert beach home to a unique marine ecology ? C’mon … Drones where rare eagles nest and people pop their veins in exhaustion just to enjoy oneness with nature ? I think not. 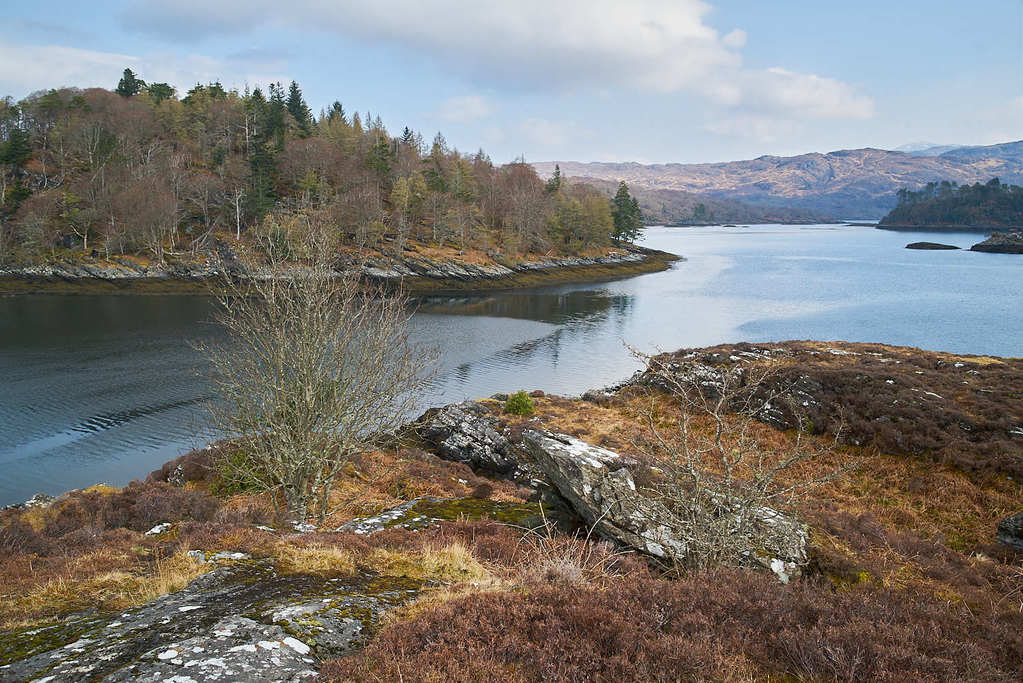 Obviously, everything we do has an impact and can be a nuisance to others. And every hobby has its own set of psychological dysfunctions. For us togs, I believe that loosing sight of the big picture and focusing on the narrow goal of “getting the shot” does as much wrong as all others combined. It makes us buy all the wrong hardware, focus on tech at the expense of creativity, act as bell ends in the field … Unless you’re really making a living from photography, it really, really doesn’t matter if you don’t get a shot. Another is just around the corner. We might think our photography is serious and important, but it just ain’t. Nobody’s gonna notice. If you (like me, on numerous occasions) feel compelled to act stupid to get a shot, just kick you ego in the nads and take step back. Photography is a process, a life-changing pursuit that can take you to great places of personal satisfaction and evolution or make you neglect a lovely partner (and piss the heck out of other hikers).

The difference is one of connection. 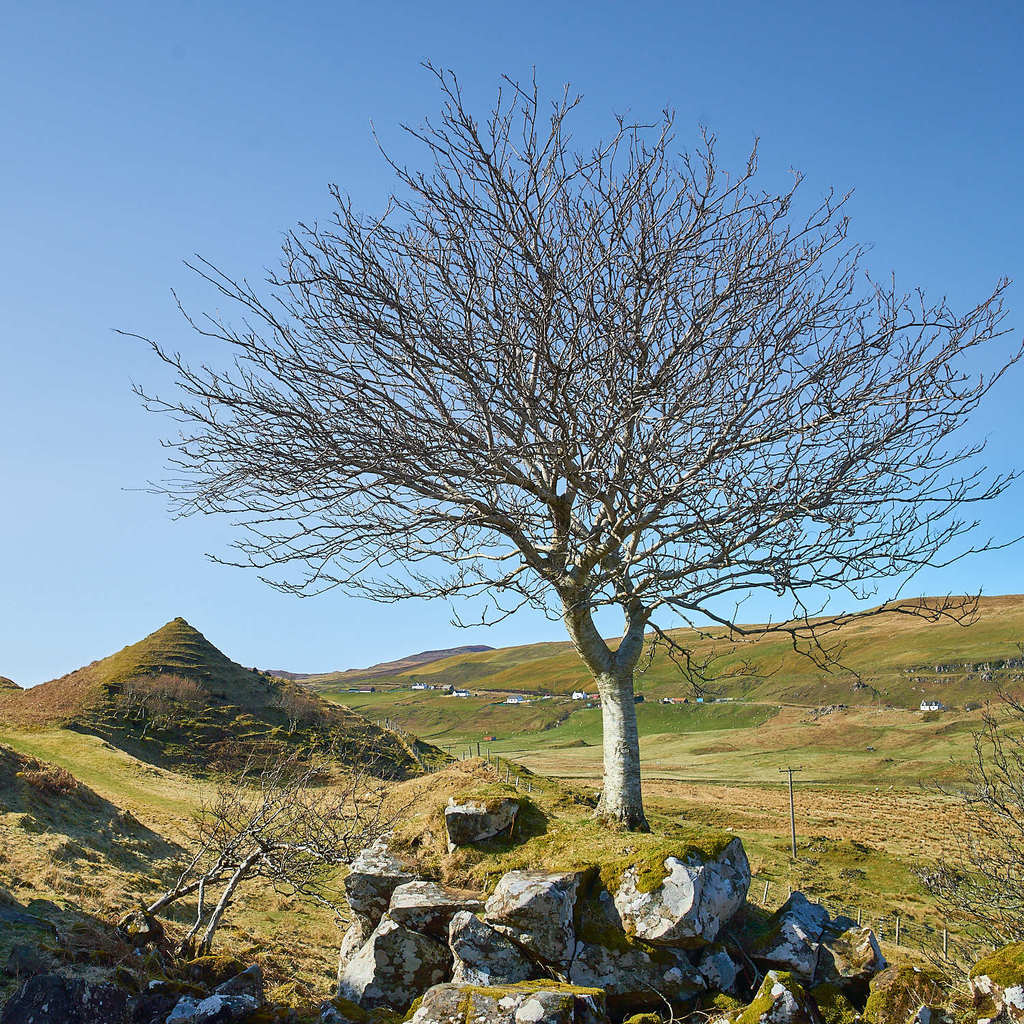 Or lack of. Trying to get the shot at all costs shows a lack of connection with the subject itself, as if the photograph is more important than the scene and your relation to it. It never is. If trying get the shot has occasionally caused you to lose sight of the bigger picture, try reconnecting with the scenery and context on an intimate, personal level. That will slow you down while at the same time give you a heightened sensitivity to what makes a good picture. A win-win, right ?