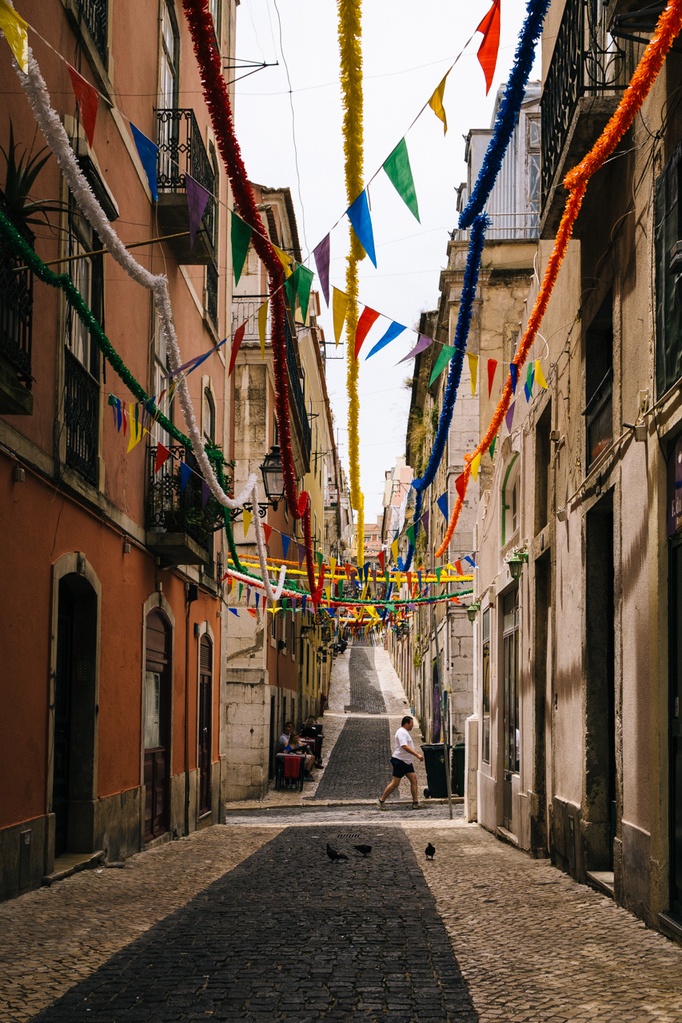 Old town in Bairro Alto with pennants and garlands

I stumbled upon Lisbon a couple of years ago during a business trip. Like many others, I didn’t have it high on my travel radar. From a European perspective (or at least for me), cities like Hong Kong, New York, or Mexico City are arguably much more interesting because they’re very different from our daily lives, far away and therefore more taxing to reach.

So, with this post, I want to introduce Lisbon to your must-see travel list, or if it’s already on it, push it some positions up.

My relationship with European cities

I have a love-hate relationship with European cities. Of course they’re easy to travel, have a deep cultural heritage, offer great sights and are interesting for other reasons and occasions. But photographically, I fail to connect. Amsterdam, London, Stockholm, even my own home town of Berlin don’t spark my excitement, don’t get me in the mood and simply don’t inspire me enough. It’s not that I haven’t tried. I’ve been to Amsterdam twice for example. While definitely a nice city to live and visit, seeing all the places of interest and strolling the streets, I returned with just three keepers — and there were just average at best. Or take London: after two trips, I returned with only two keepers. Stockholm: zero. I have more keepers from Berlin because I shoot here more often, but it’s rarely about the city and their life, more about documenting my own life.

Furthermore, I haven’t seen any great street photos from these cities that couldn’t have been taken anywhere else — maybe I’m exaggerating but still no inspiration. 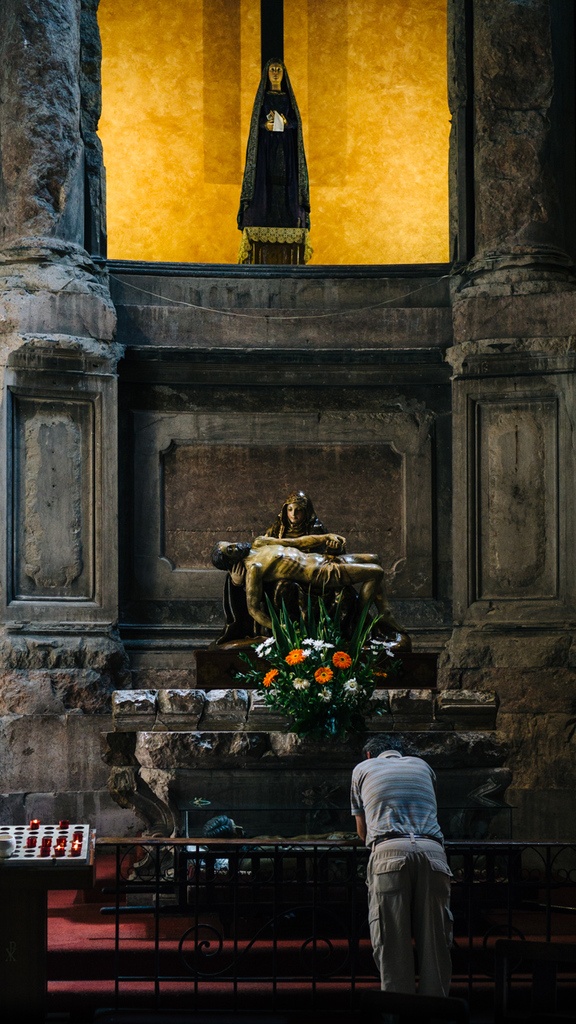 It’s not that these cities are bad to photograph in general. It’s me! Your mileage will vary. And that’s great. Through constant analyzing your own portfolio, you’ll discover what it takes to get you into your zone and what makes a great location for yourself.

I think that my personal problem with these cities is, that they are too similar to my own home town. Architecture, mentality and the way people act on the street is too common to me and won’t get my photographic juices to sparkle enough. I need change from my daily life.

I came to Lisbon three years ago for a conference and spent some time walking around the city. I had no plan what to expect, where to go, what to see, or any idea of the city. But what I saw blew me away and sparked street photography within me again. 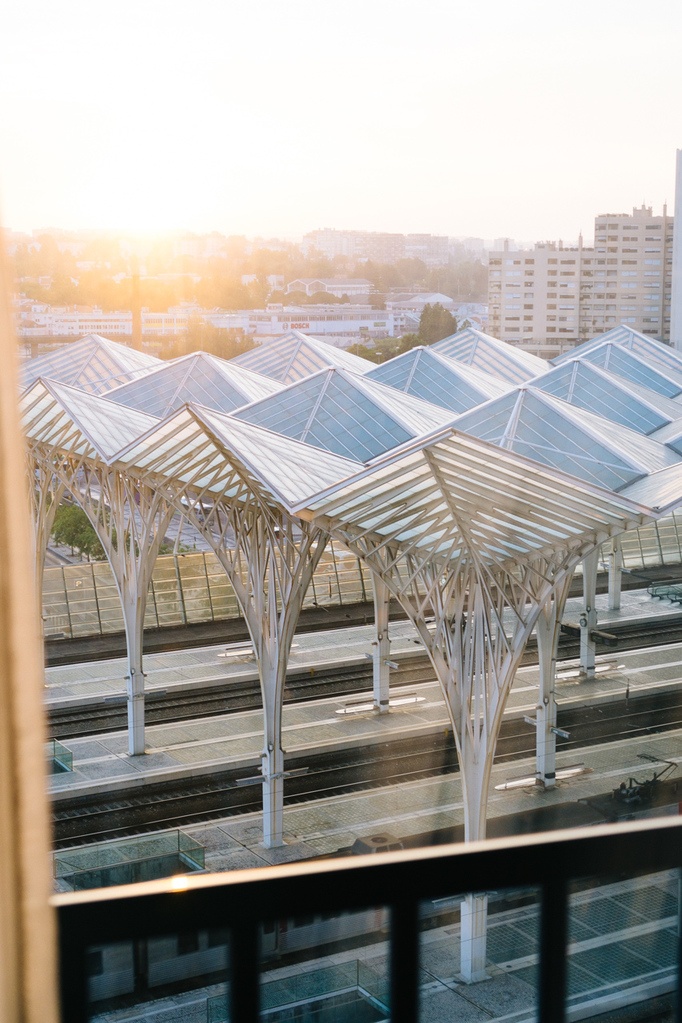 What I love about Lisbon is the quality of light. And “quality of light” is something we all need to care more about. To me, it’s the unique way of the volume of light, its color, its brightness and the way it reflects color from surfaces and plays with the shadows. In Lisbon, it’s just beautiful, voluminous and warm, but also bright and strong, but not extremely contrasty. 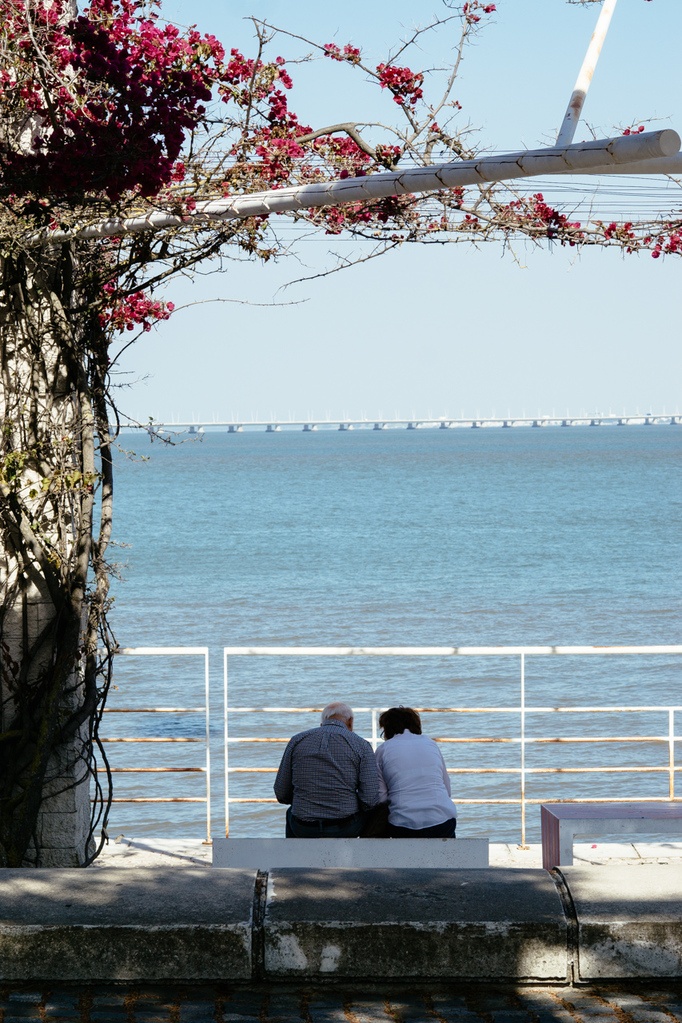 Second feature is people and life on the street. Everything happens on the street, people are extroverted, gestures, talk, laughter, food — the Mediterranean lifestyle — and every kind of skin color. There’s always something interesting to experience. Portuguese people are a little bit more restrained then their neighbors from Spain or Italy, more like France or Greek — which I like very much — but still much more then we northern Europeans. Lisbon people don’t react much to photographers and cameras, they’re used to tourists. That makes photographic life really much easier. Berlin for example, also known to tourists, is much different. Germans are much more concerned about privacy and don’t like to get photographed in public. 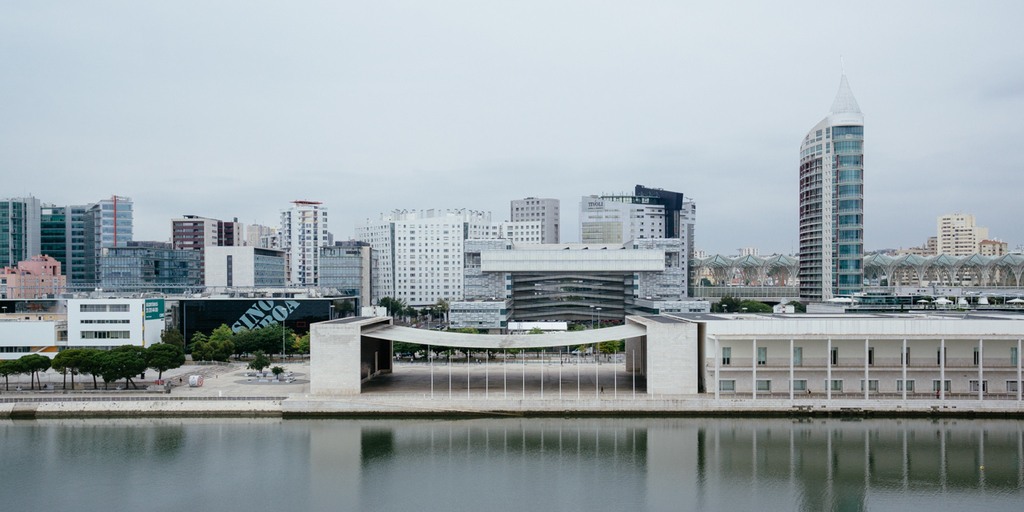 Lisbon’s third feature are its many different styles of architecture that kind of clash together. From old to new to modern. From Alfama with its old, narrow and steep streets to the block towers of Chelas to modern, almost abstract architecture of the former Expo area Park of the Nations. And then they have this great color scheme throughout the city which consists of mostly pure white and earth colors with lovely textures and then they spread dots of colors, like a striking green house or wall painting or shop. That makes it quite easy to control the colors and the viewer’s eye. There’s some much variety, so many perspectives to find, so much beauty and oddity. And it’s all a little bit run down too — and I mean this as a compliment because I like that very much. Lisbon is also not very big so you can walk some of the distances and see more — or you take the excellent subway (the stations are a photographic destination themselves).

Taking snapshots from a boat trip on Rio Tajo

Without saying goes Lisbon is also safe, offers all vacation amenities of a modern European city you can imagine (food, history, sightseeing, museums, culture, music …) and (for European readers) is easy to get there. 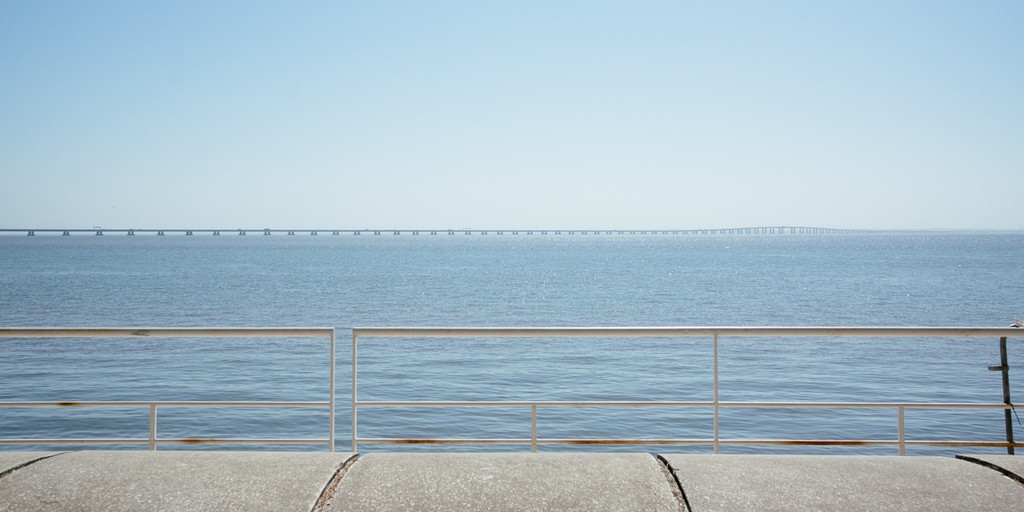 To me, Lisbon seems perfect for street photography, lifestyle, urban landscapes and urban geometry photography. It has features that in its entirety no other cities have and especially none of the above mentioned northern European cities.

For the last three years, I’ve returned to Lisbon once a year in late May or early June. And as you come back to one place over and over again, you start exploring things off the beaten path quickly or approach the same things differently each time.

My first time in Lisbon

In 2015, I came to Lisbon ill-prepared — actually not prepared at all. I didn’t knew anything about Lisbon, haven’t read any guide or any recommendation. That’s totally not my usual approach but it happened — and I enjoyed it and never fixed my lack of knowledge. After exploring my nearby surrounding, I simply looked at Google for some images of Lisbon and quickly stumbled upon great street art that covers whole blocks. I looked up where some of them are, took the sub-train to that direction and just explored the area. I later found out that this district is called Alfama and is part of the old Lisbon. 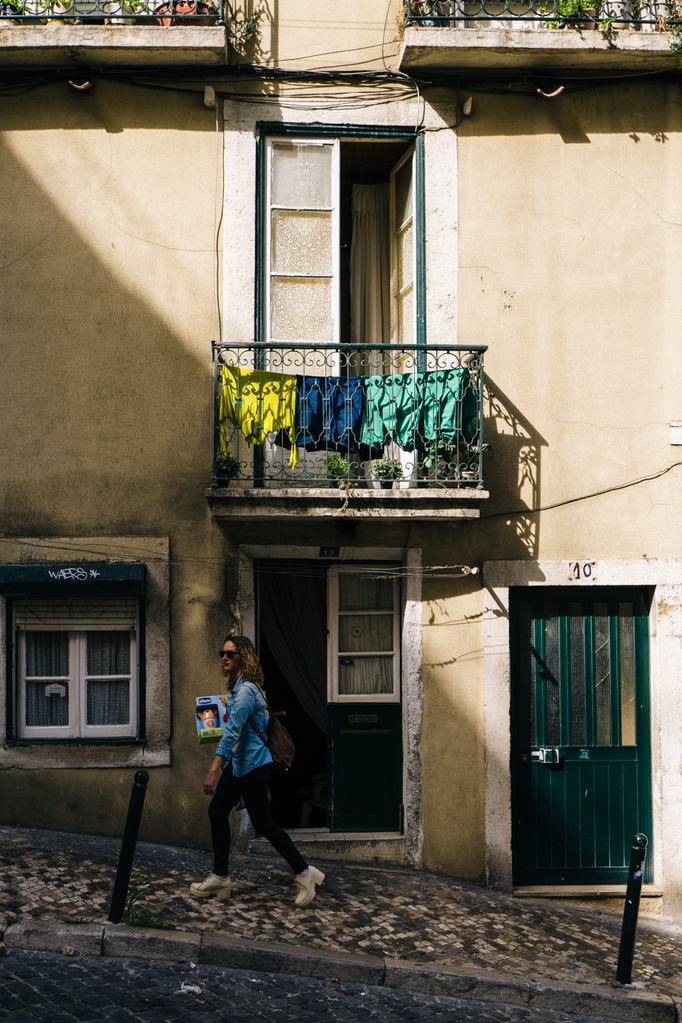 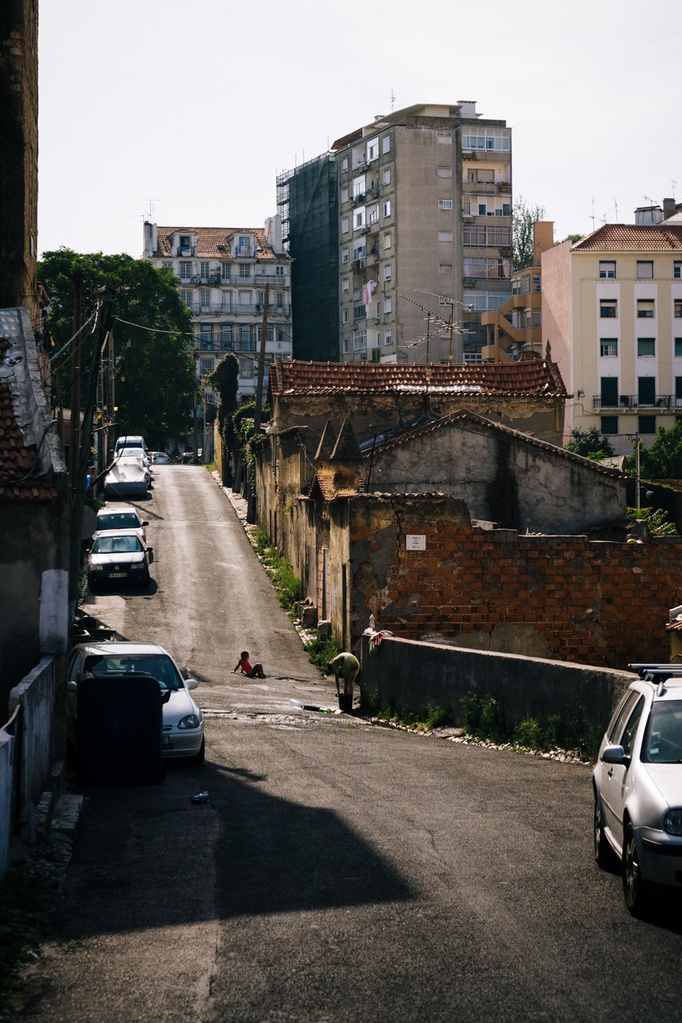 Kids bathing on the street in Alfama

While walking aimlessly through Alfama, I saw girls bathing on the street, old men discussing politics and playing chess in a park and a lot of simple, daily life. I took some classic street photography, let people walk into my frame, got close in and tried to capture Lisbon life as it happens randomly right in front of me. 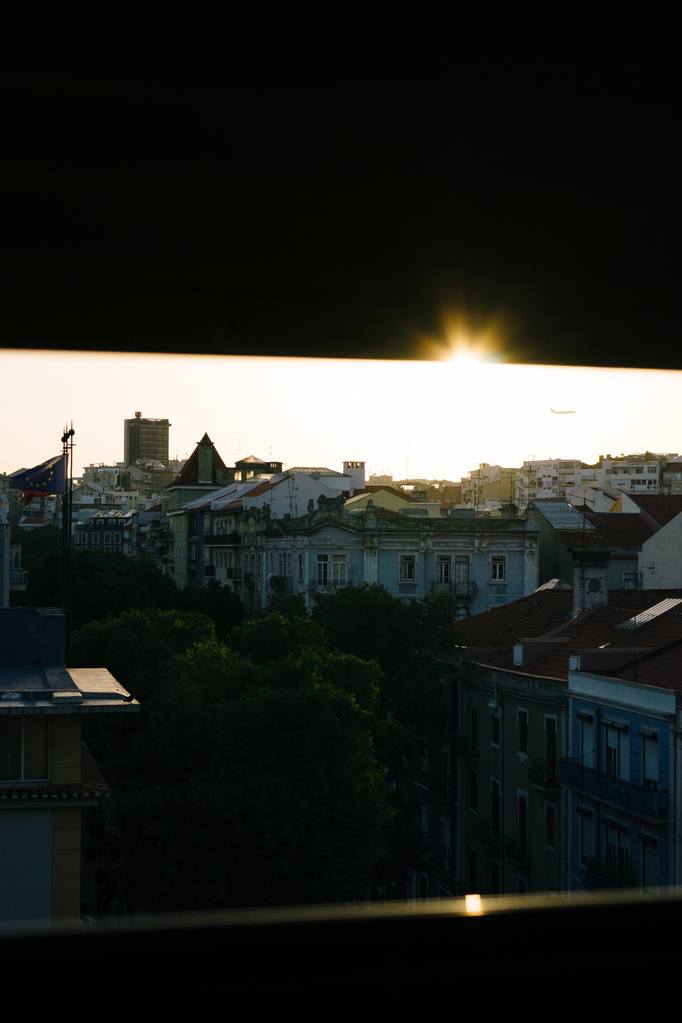 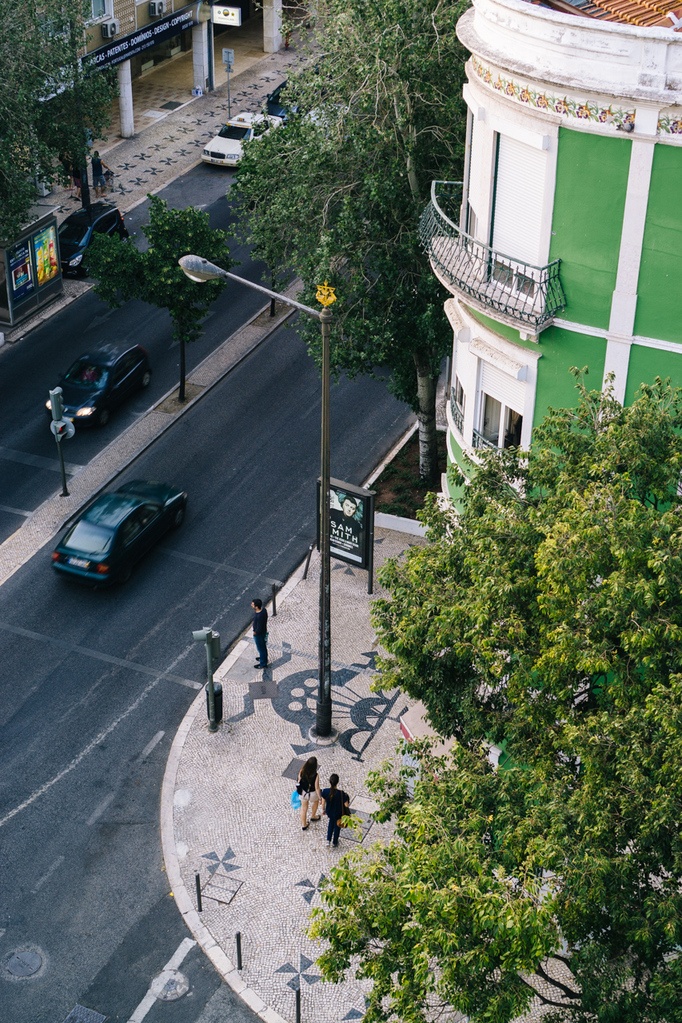 On other days, I wandered through the old districts São Vicente and Santa Maria Maior, the resident districts Arroios (where I later found a nice, simple hotel) and Santo António and Parque das Nações where I stayed the first days. More in my Flickr album.

The year after, I continued and embraced the no-idea approach, went out and waited for whatever crossed my lens and how I could theme it. I simply got off the subway at a station I had often passed-by. Between Bela Vista and Olaias the subway submerged overground over a green valley in the city. That looked interesting and I just got off at the next station and wandered around the area for a couple of hours and came back with some amazing documentary images of Portuguese social housings. 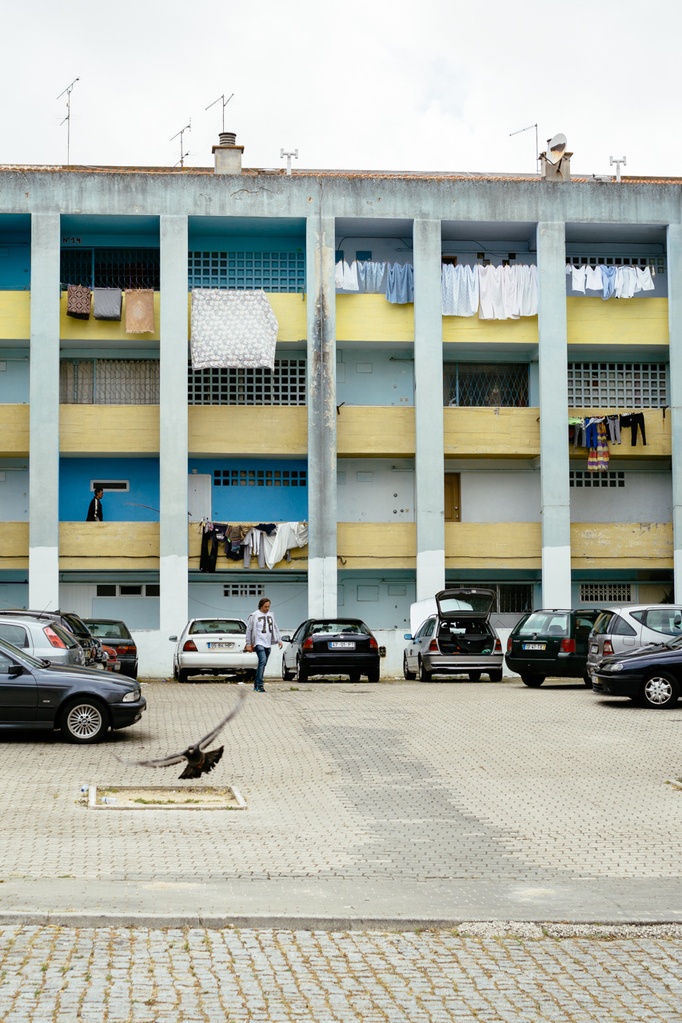 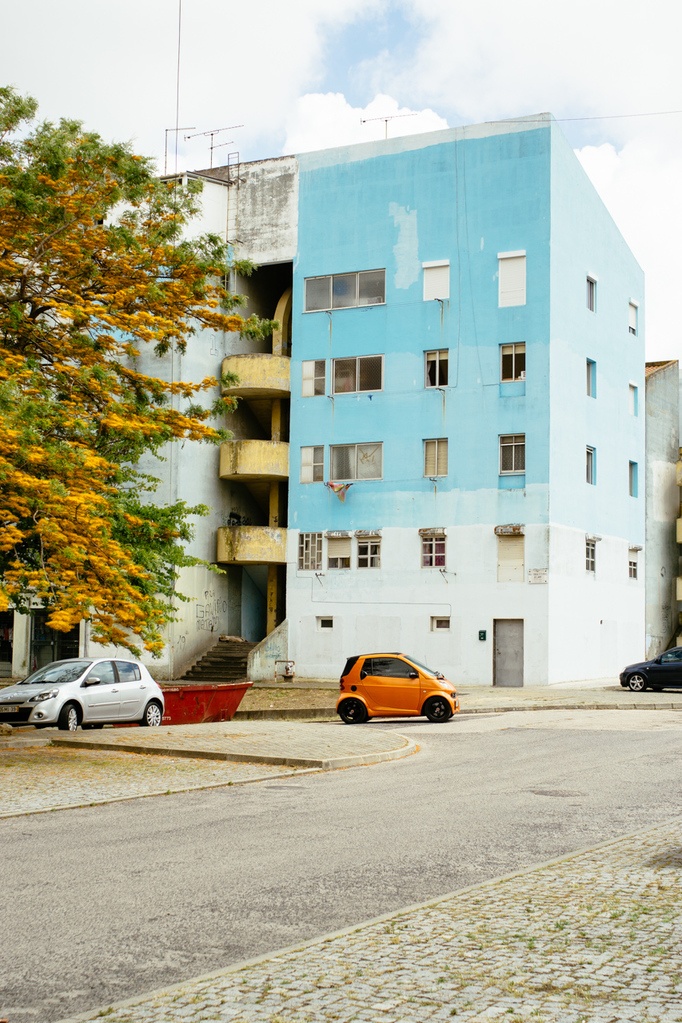 I’m very much drawn to these areas. Built after the latest social-architectural standards, they often turn into the opposite and decades later look like dead spaces. Often some kind of “modernization” starts to color everything and make it more “human”. Often not more than lipstick on a pig. Everyone who can afford it leaves these areas — at least it’s happening in Germany. To my surprise, while in Germany these areas are primarily inhabited by lower income classes, I found every kind of social class living in those districts Marvila and Beato. 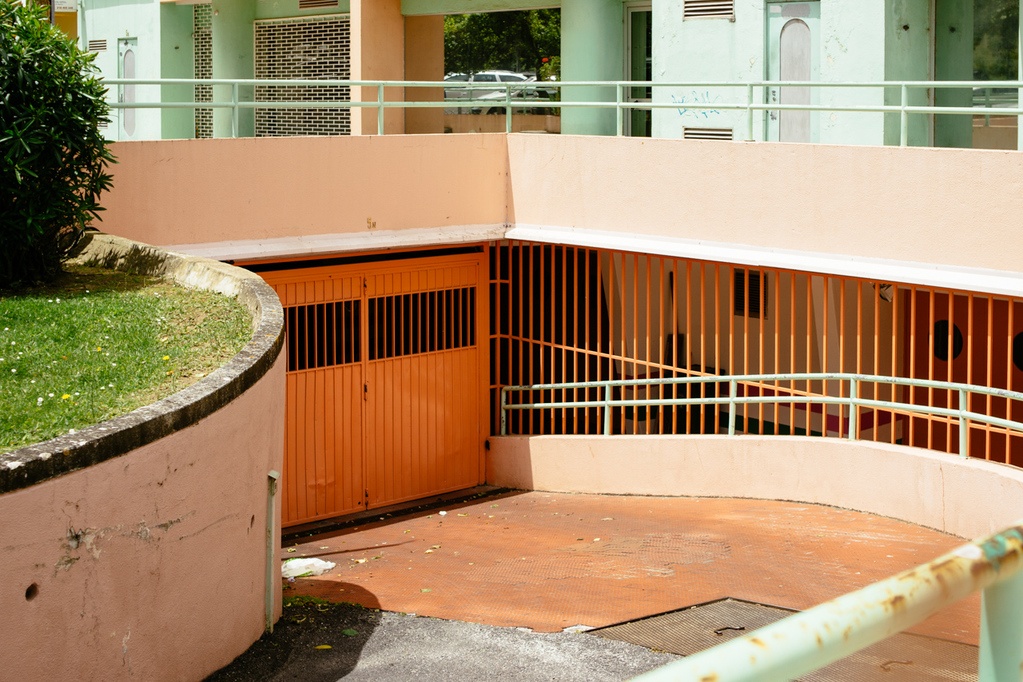 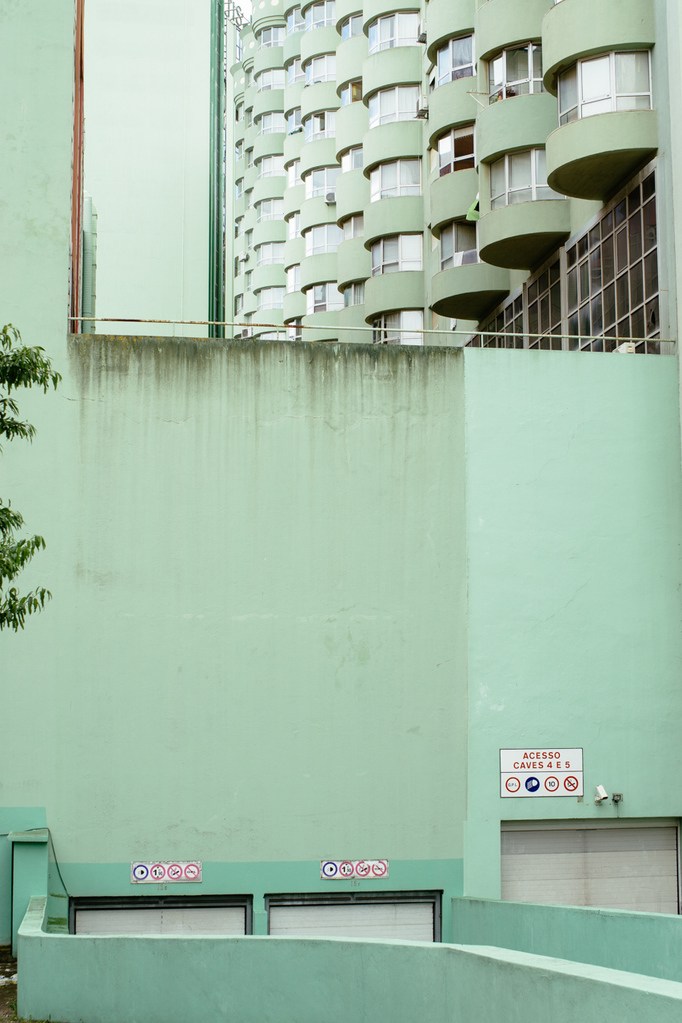 So I wander between these empty, almost anti-human places where life seems to try finding its way like a disease, sometimes people rush by and my biggest surprise was a wasteland right between those tower blocks with illegal gardens and unexpectedly, three horses. 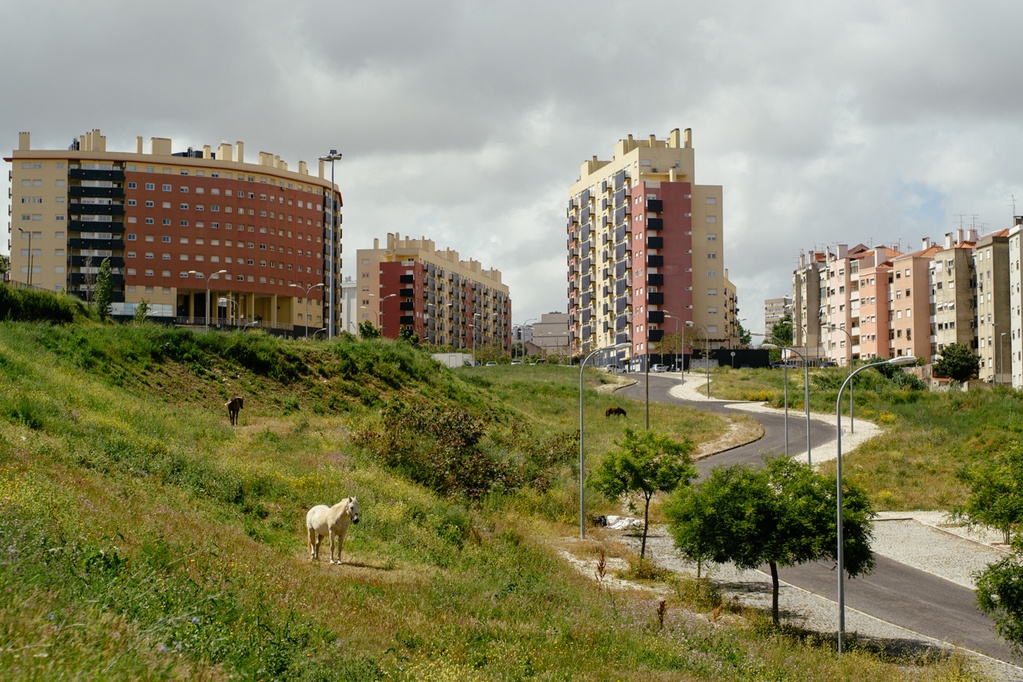 Three horses in front of the Areeiro’s skyline 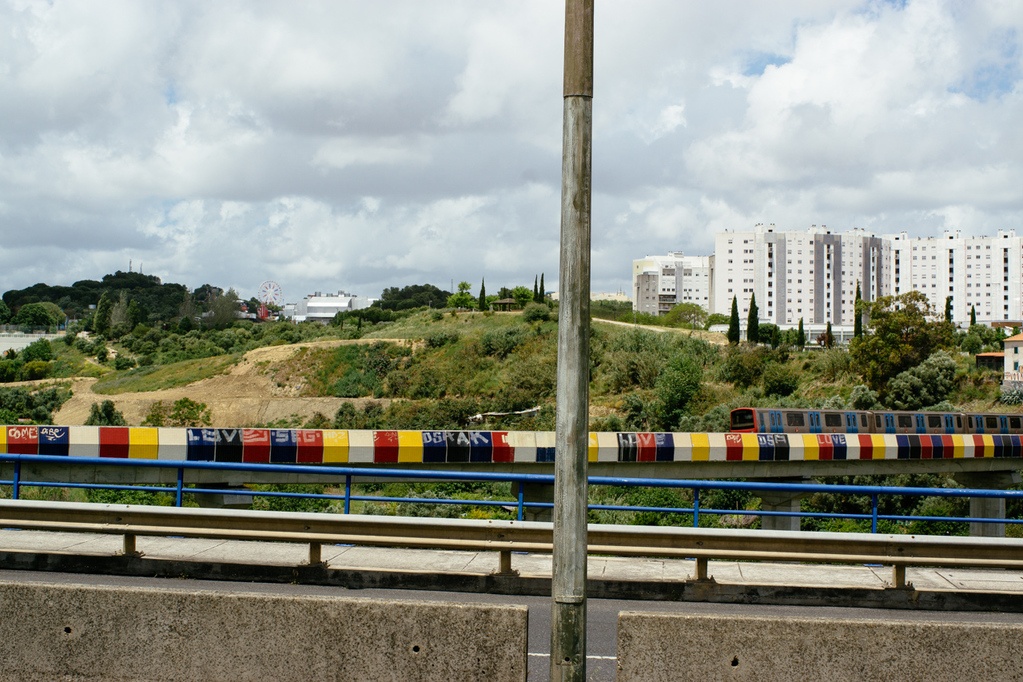 Later I stumbled upon a huge, old cemetery, completely in white and people dressed in black walking around. Some old combs were decaying with scattered glass doors, exposing coffins and their interiors to the environment and curious watchers like me. 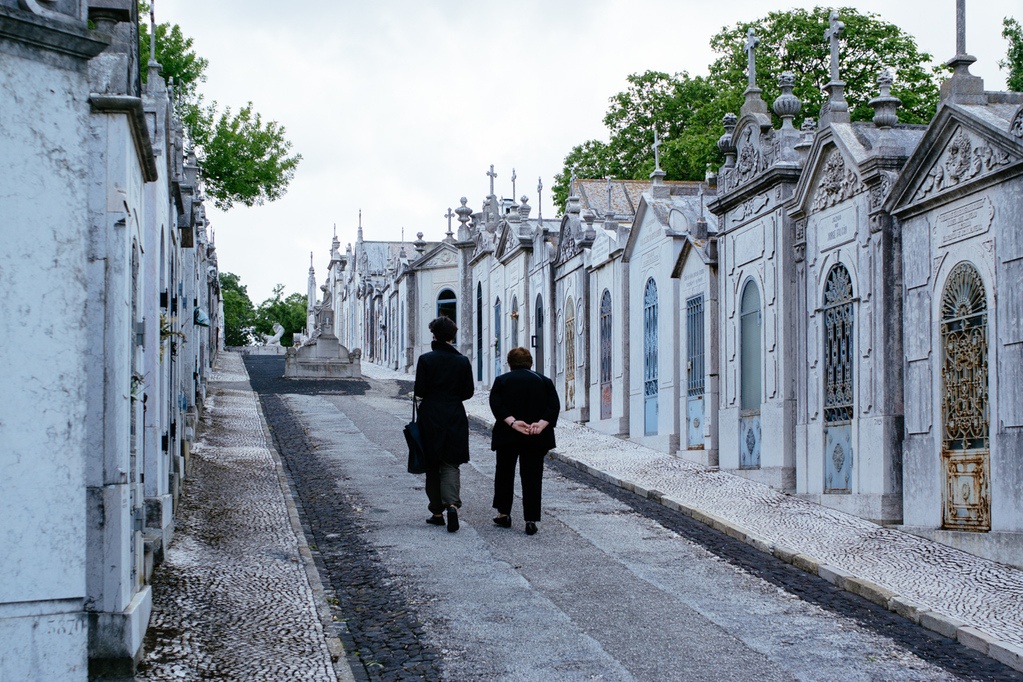 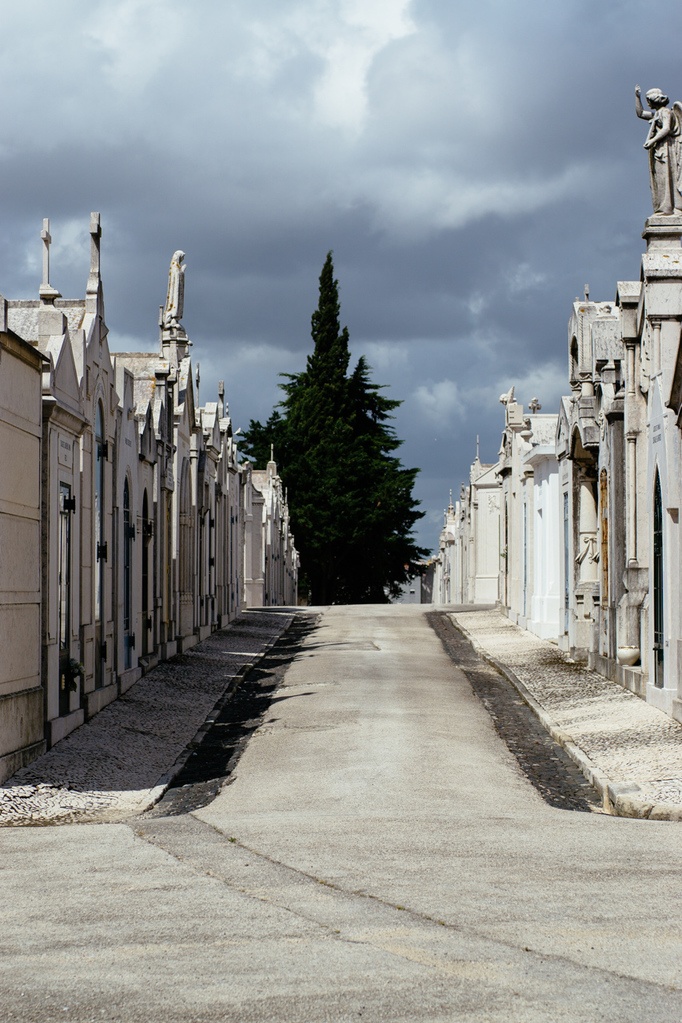 Another big surprise awaited me at my conference hotel: The 2016 Lisbon ETU Triathlon European Championships took place right in front of it for two days. Not only was my hotel overbooked with athletes from every country and I had to by-pass stuffed lifts with bicycles several times, it also brought me the possibility to photograph a sports event with my manual glass — and it worked flawlessly! I’m normally not interested in sports and therefore not photographing them. But when I happens right in front of me without any effort from my side, I’m the last one to miss an opportunity. 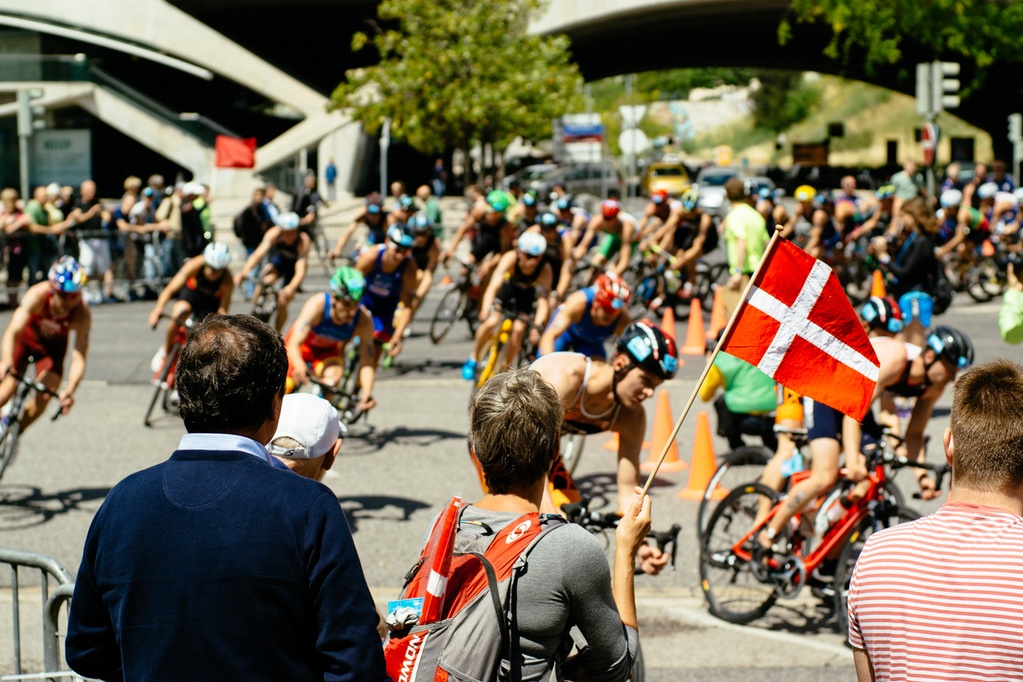 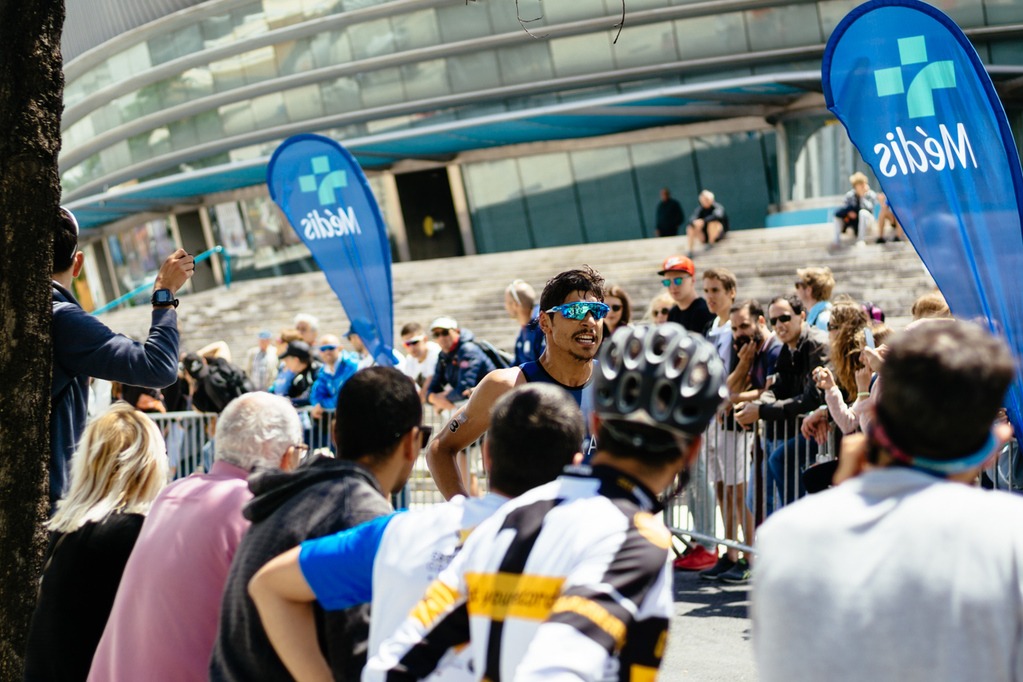 Marathon runner runs through the crowd

So, my second trip was very much people in environment centered, or people’s environment (not necessary people in the frame). More in my Flickr album.

This year, I had less time for Lisbon because my family picked me up early for a trip to the Algarve coast. But for the time I had, I explored Parque das Nações more deeply and the southerly located Marvilla district. There I found tower blocks, large empty spaces, industrial areas and convoluted motorways. I had beautiful, sunset light that bathed everything in warm yellow and people occasionally rushing here and there. 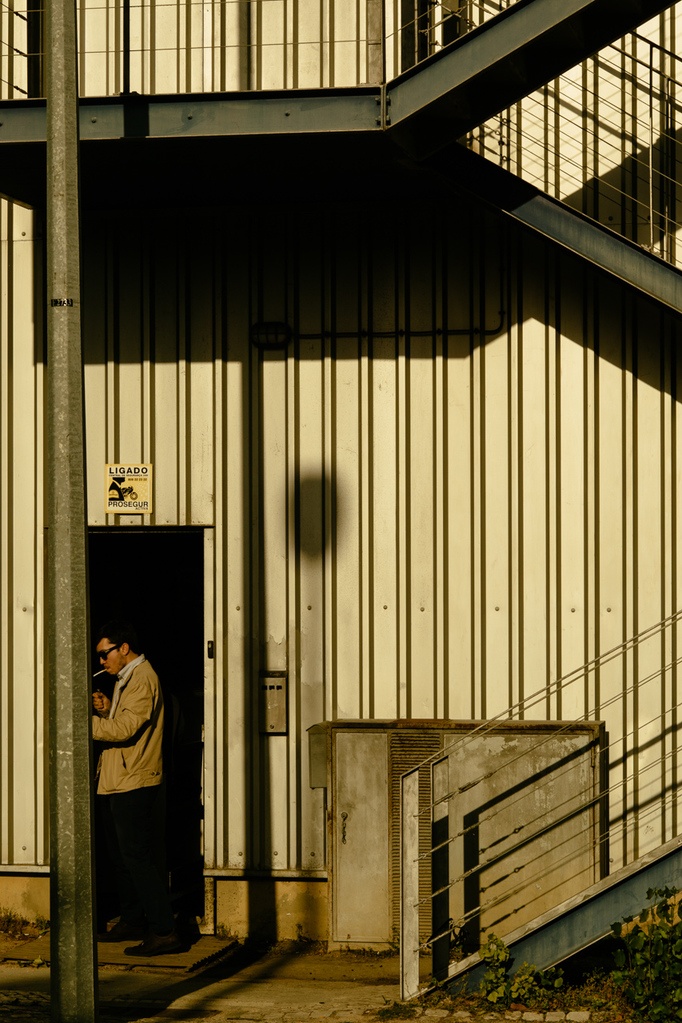 So I concentrated on urban spaces, shapes, light and people. Unfortunately, it turned out complicated and after culling, ended-up with only a few keepers. But I like to challenge myself every time I’m here and failing is part of growing. 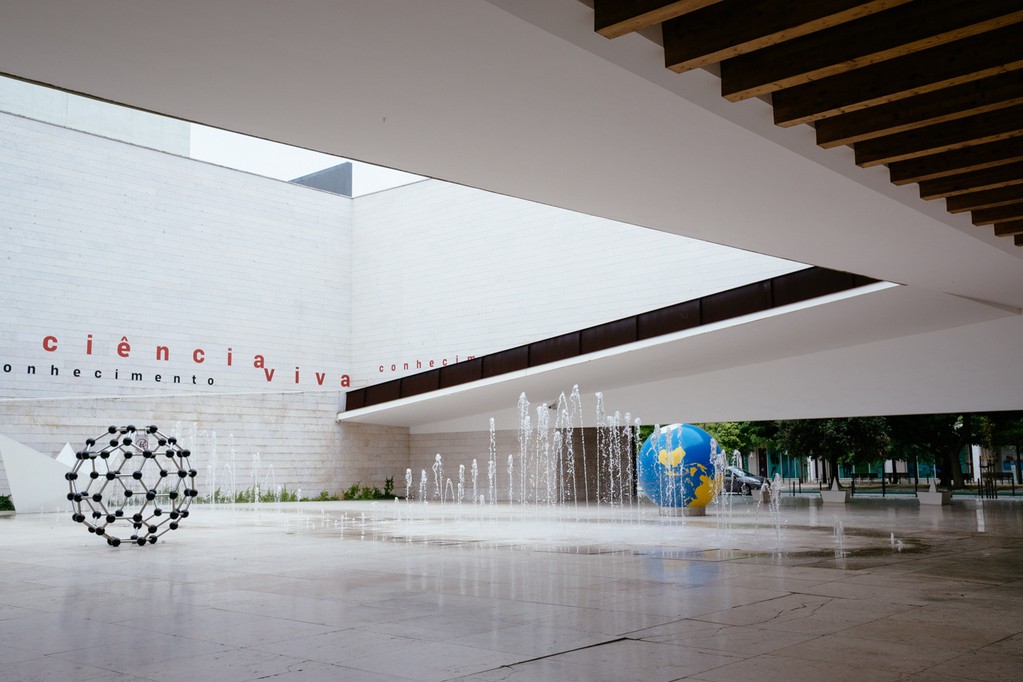 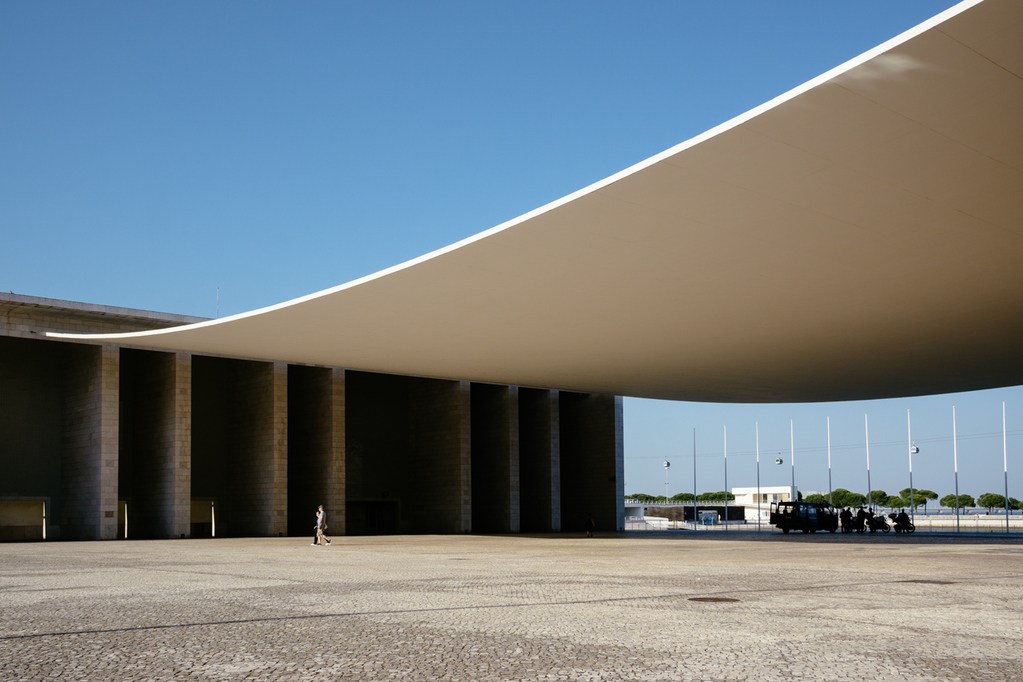 The other day, I’ve went to Alfama again, a different route, again with beautiful sunset light and I continued with my urban spaces theme for my third visit. More in my Flickr album. 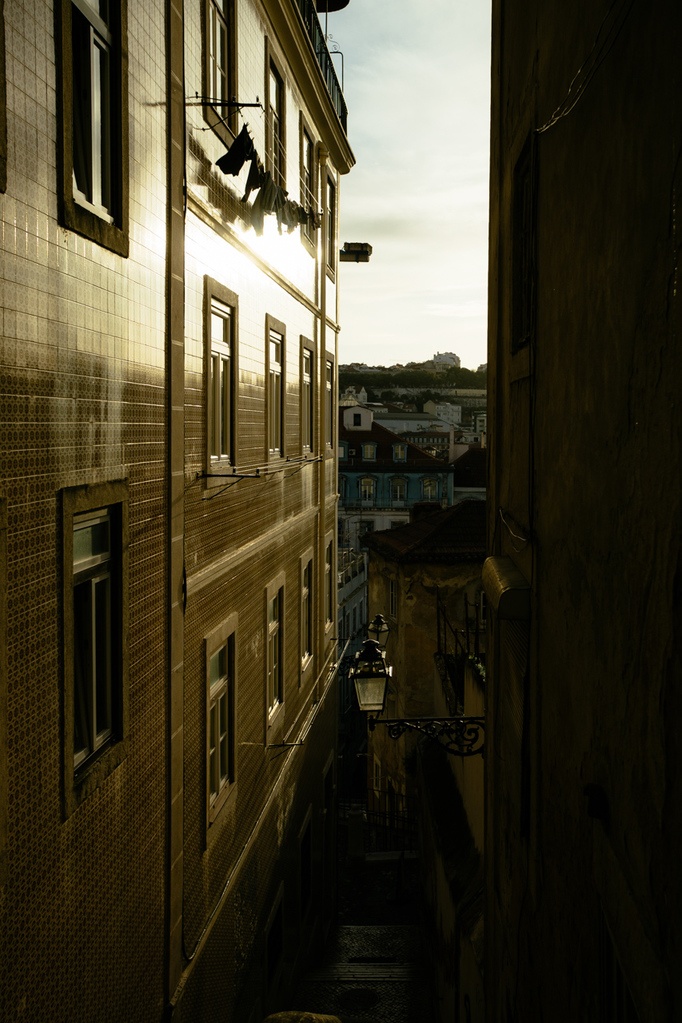 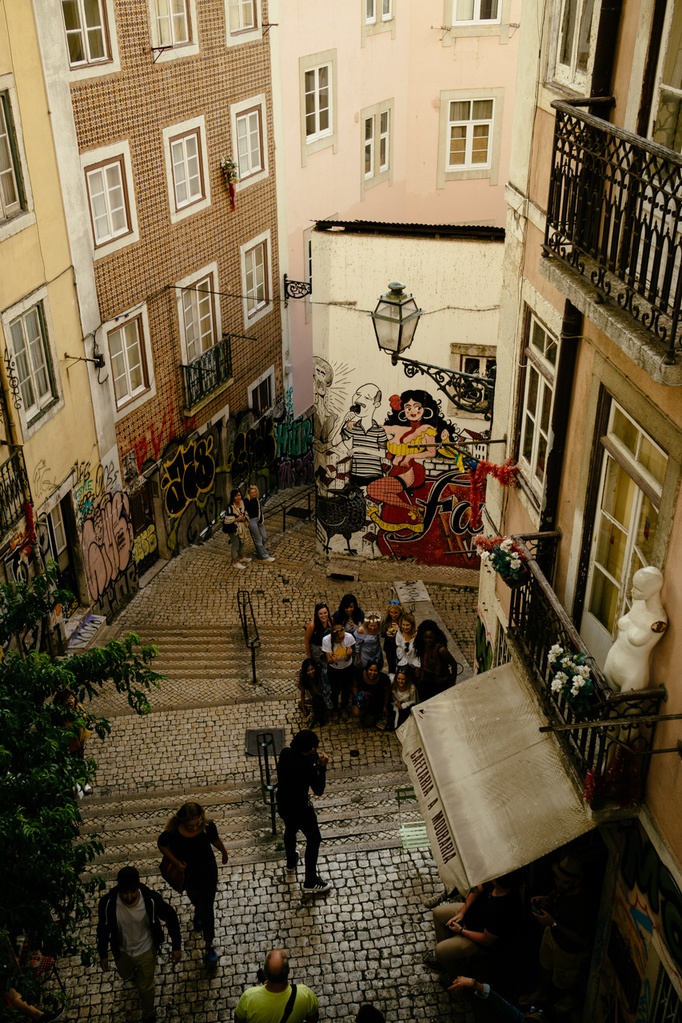 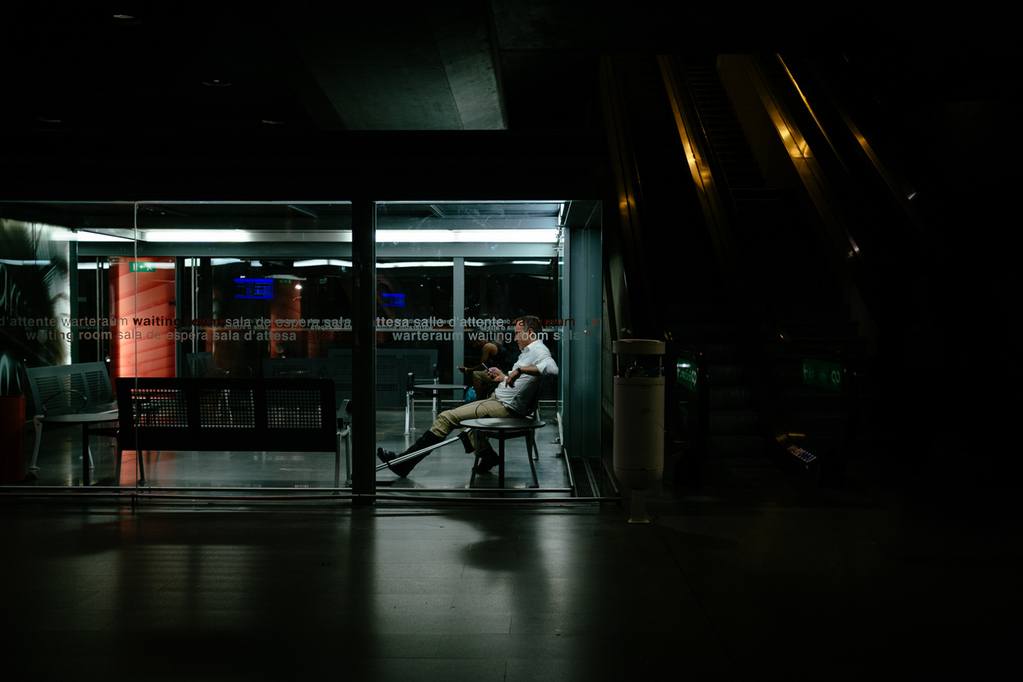 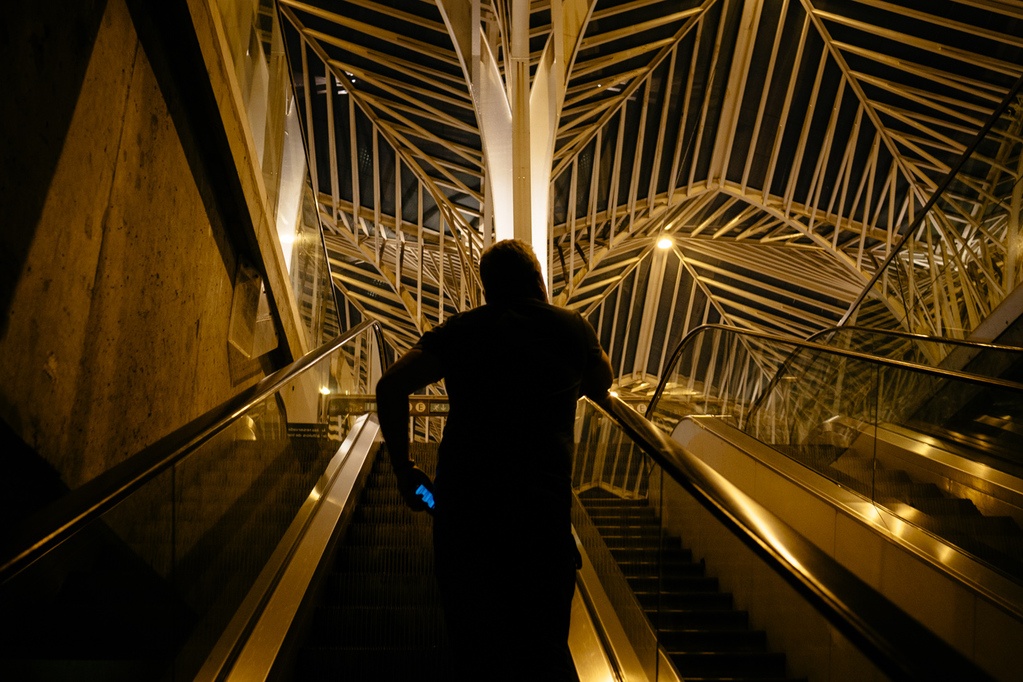 So, that’s it for now. I’ll be in Lisbon again next year for sure. Let’s see what I run into and how it turns out.

Thanks for reading, Steffen

Previous Post #650. Are the rule of thirds and golden hour ruining your photography ? Next Post #652. So, what is photographic composition, after all ?