I’m getting on in years and have this increasing urge to push my personal envelope and, at the same time, do something which has a bit more purpose and meaning, photographically speaking that is.

I’ll explain the above statement by saying that I’ve been an almost solely “landscape photographer” for more decades than I care to mention, photography which has usually been done in conjunction with my passion for walking in the upland and mountain areas of Great Britain, but that I’ve become increasingly disenchanted with what I would describe as the somewhat sterile nature of my images, which have deliberately excluded anything living from them, and, now, seek, more and more, to reverse that style to make sense and meaning of the environments in which I walk and, hopefully, bring them to life.

I’ve always had a fascination for, and interest in, fauna and flora, in particular bird life, and, over the past year or so have set out on my various excursions with the deliberate intention of capturing those aspects, in addition to the grand view, and have tried to “tool up” accordingly.

At the beginning of this new stage in my photographic life, I realized that my existing equipment of Leica S and Sony A7R2 was simply not going to do the job for me as, even if they were available, the size and weight of the lenses with the focal reach needed would be far too large and heavy to carry comfortably and that I would have to choose in advance which type of photography I set out to do, rather than being able to be flexible as opportunities arose… either that, or hire a Sherpa to do my carrying for me! I knew that Leica were never going to bring out a focal length long enough to do what I needed, as development of the S system effectively ceased a couple of years ago, and, as stated above, the weight and bulk (and speed) of such a lens would make it impossible for me to carry around the hills. The same is able to be said for Sony with its A system, as not even they are able to defeat the laws of physics and the image circle diameter necessary to cover a full frame sensor. The mirrorless camera bodies may be lighter and more compact than their optical viewfinder siblings but the lenses are barely so and never will be.

A smaller format it would have to be, despite the incumbent compromises, and, setting out on a short period of research, I quickly arrived at the two alternative systems of Olympus Micro Four Thirds and Fujifilm APS-C, the latter choice strongly aided and abetted by Mr. Perton’s praise for it and the obvious quality of his images taken with it and the fact that I had previously owned and used the Olympus O-MD E-M1 Mark 1 and several “Pro” grade lenses and, while I admired it’s build and optical quality and most of its design, I was never really satisfied with the image quality it produced.

My comparison exercise consisted of receiving RAW images taken by a friend in Australia on his new Olympus OM-D E-M1 Mark 2 and downloading further RAW files taken using that system from the internet and being very kindly given the loan of a Fujifilm X-T2 with the 23mm f2, 35mm f2 and 50-140mm f2.8 lenses by a former colleague. I’m afraid it was no real contest as I found the Fuji files and camera usage suited my type of photography much better than the Olympus, especially in situations where I wanted to use wider angle lenses which is an area where I feel, from experience, that the smaller format does fall down.

To say that I am pleased with my purchase would be an under-statement. As the saying goes, “the proof of the pudding is in the eating” and it has been my go to system for all types of photography over the past 10 months, relegating my Sony A7R2 system to only occasional use, if only to remind myself how competent, easy and enjoyable to use the Fuji is by comparison, and has led me to dispose of my Leica S system, a step I would never have contemplated a year or so ago.

Is the Fuji perfect? Of course not, as nothing made by Man can ever be “perfect” and “perfection” is an extremely subjective term, but for me, it is the “perfect compromise”, doing some things superbly well and others sufficiently well. It does landscape work sufficiently well and competently and wildlife work superbly, is extremely robust, well made and, for the most part, well thought out and is intuitive, easy and enjoyable to use, an aspect we amateur photographers often miss in the quest for the holy grail of ultimate image quality. Its sensor produces images which print superbly up to its native A2 size (at 300dpi) and beyond, prints which are, at that size and to my eye, indistinguishable from those made from images taken with the higher resolution Sony or Leica cameras. The optical and build quality of the lenses I own give nothing away to those from the other two systems mentioned above and the lenses are, obviously, much lighter and more compact.

I apologize if I’m beginning to sound like a Fuji fanboy and can only assure you that I’m not and that such evangelical devotion and blindness is not my style. I invested in the Fuji system with eyes wide open, in the full understanding and appreciation of the compromises I would have to make. A system has to perform for me or it goes and I have little, or no, sentimental attachment to equipment which doesn’t do that, as evidenced by the number of different systems I’ve had over the years, in particular by my “beloved” Leica S.

Although internet screen resolution is no way to judge the total quality of images, I’ll let some of my images of the past ten months do the talking for me and assure you that each prints superbly well up to its native A2 size (even those taken at what might be considered to be ridiculously high ISO settings) a size which, when all is said and done, for a 24 megapixel sensor, only equates to a Photoshop screen resolution of 24% and not the ridiculous 200% or 300% at which many images appear now to be judged in many internet forums.

The first image was taken a week or so ago and is of a diving Kingfisher. The Kingfisher is an extremely small bird, no larger than a sparrow, and moves with extreme speed as it dives. To put its size into some perspective, the fish it is catching are no longer than the first joint of my thumb – at most, three centimetres. As a result, the image was taken from a rudimentary hide less than three metres away from the pool into which the bird was diving, necessitating a shutter speed of 1/3000th of a second or faster to capture the action at an aperture of f4.5 to try to obtain the benefit of some depth of field. Given the quickly changing lighting, the resultant ISO varied between 6400 and 10000 and the image you see was taken at ISO 8000. There is noise in the image but it is not intrusive and is uniform and more like very fine grain in nature with no colour blotching and, importantly, the fidelity and clarity of the colours have been retained. The camera was set to use the silent electronic shutter, shooting at 14 frames per second to capture as much of the action as possible. This performance would have been impossible with film and would be impossible to equal or better with most of today’s digital cameras, even those specially designed for such work. Even the dynamic range of the sensor is pretty well retained at such a heady ISO level. A truly superb performance from the X-T2, plus booster grip and 50-140mm f2.8 lens – a combination which costs just under £3,000 Sterling, is weather resistant and weighs in at a touch below 1.75 kgs. 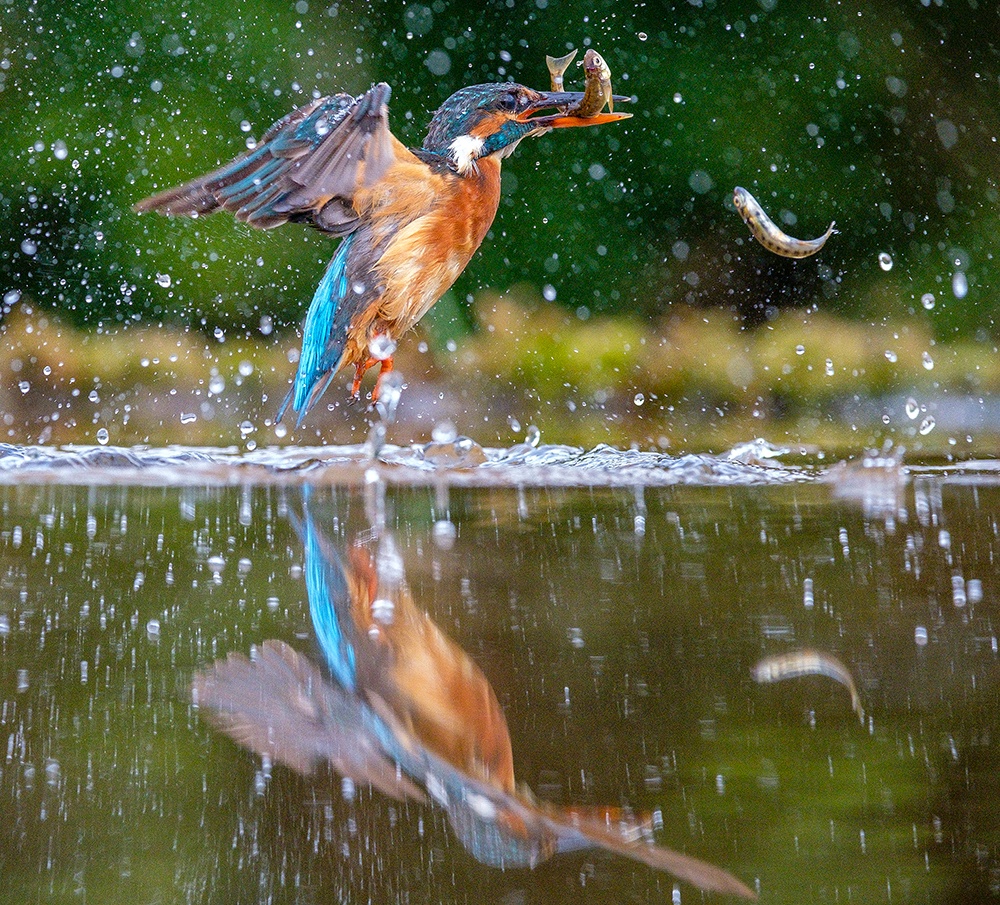 The second image was taken on the same day, using the 100-400mm lens and was shot at a much less flamboyant ISO 800, as the juvenile Sparrowhawk was virtually stationary, other than its constantly moving and watchful head. The bokeh at 400mm (600mm full frame equivalent) and at an aperture of f5.6 is, to my eyes, lovely and compliments beautifully the detailed, yet delicate, rendering of sensor and lens. Colour quality is, again, superb and is a feature of the Fuji sensor and the Lightroom profiles. (I only shoot RAW).

The third image was again shot with the 100-400mm lens but, this time, with the addition of the 1.4x teleconverter, making it into the full frame equivalent of a 840mm lens. It was shot at ISO 640 and cropped into a panoramic format to accentuate the line of Puffins and focus attention on the bird staring at the camera. The image was shot hand held using the excellent image stabilization of the lens – a package weighing in at below 2.4 kgs. 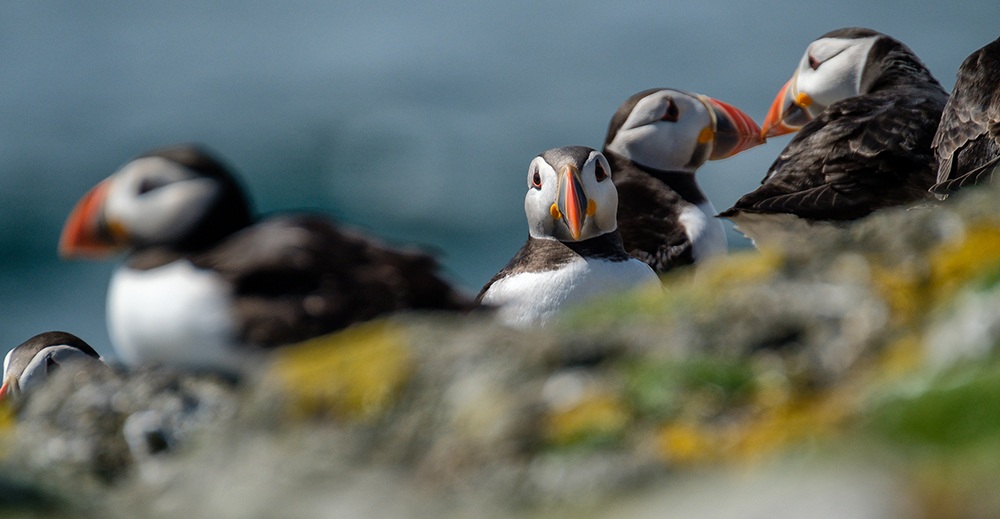 The fourth image of a Dog Rose, taken using the 35mm f2 lens, is of a completely different nature and helps to show the flexibility of the system. Shot hand held, with a lens which would not normally be associated with this type of subject, with no image stabilization available and at ISO 400 to minimise image shake, the image displays a lovely colour palette and tonality.

The fifth image, taken using the 18mm f2 lens, demonstrates how well the camera deals with my traditional type of landscape work. Taken using a tripod, at ISO 200, the image shows excellent resolution and dynamic range and, again demonstrates the quality of the colour palette and tone. 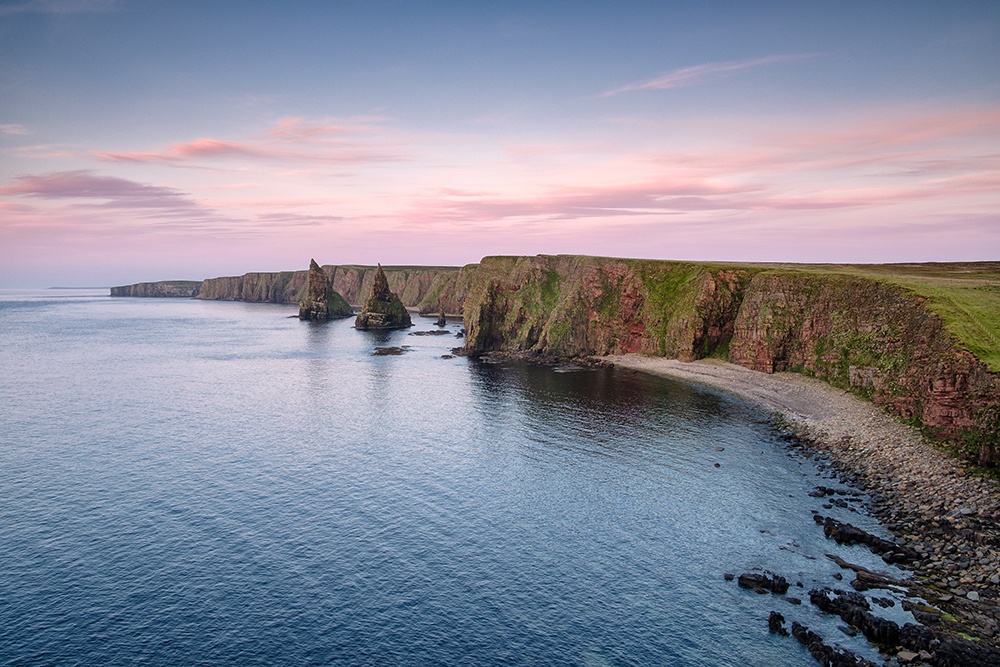 The sixth image, of snow squalls sweeping over the Cuillin mountains on the Isle of Skye, was taken using the 50-140mm lens from the roof of my vehicle to give some extra height to the image. Again, it demonstrates how well the camera takes to detailed landscape work and how good the colour palette and tonality are. 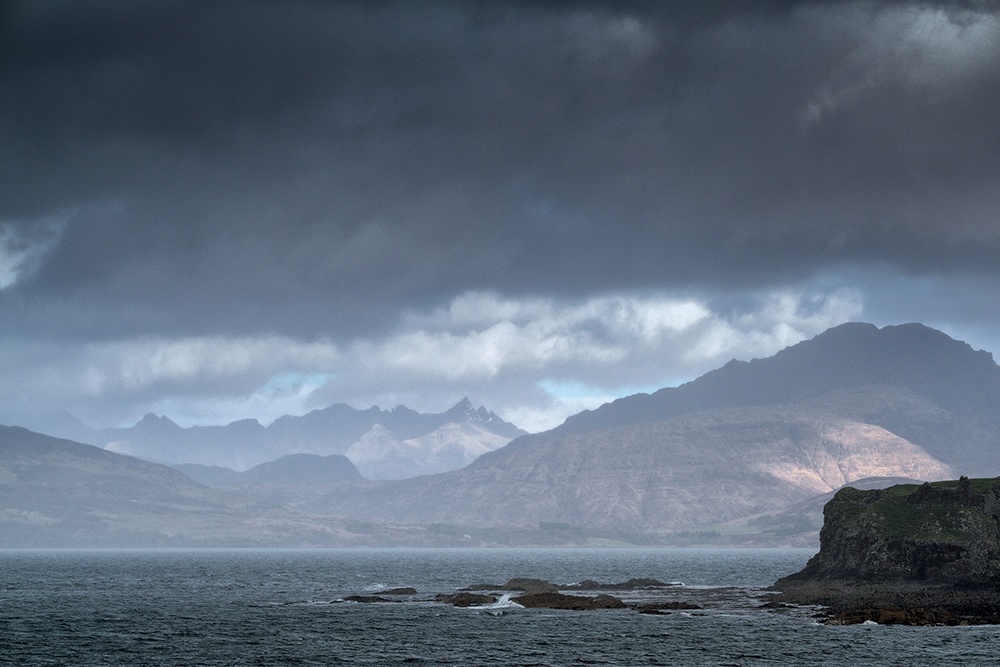 The final image (you’ll be glad to read) is of a wild Buzzard in flight and was taken using the 100-400mm lens hand held at the 400mm focal length, at an ISO of 800, enabling the action to be frozen by using a shutter speed of 1/1250th of a second, while panning slowly with the moving bird. 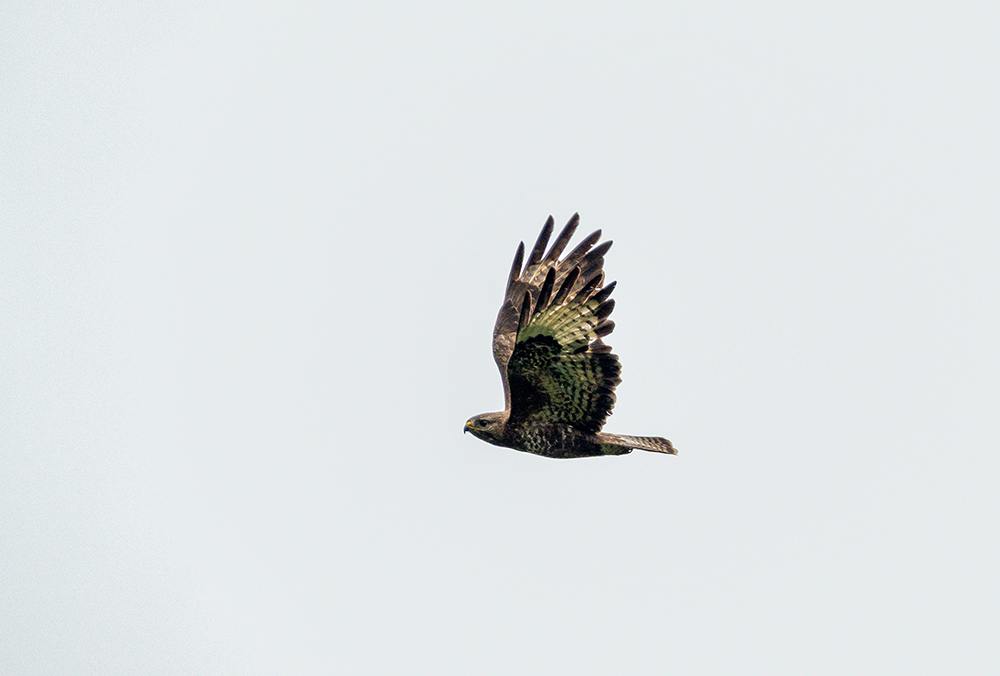 I apologise for the length of this article but I hope it has given you some food for thought and an appreciation for what camera systems which might be considered as being of “lesser quality” are able to achieve when used with understanding and an honest recognition of their potential shortcomings – even when used by someone learning a new genre of photography. As I said, no system is perfect and the object is to honestly evaluate and recognize one’s needs and, thereby, achieve the perfect compromise able to meet them.