Hello! I’m Adam and this is my first article on this site. If you’d like to know a little more about me, then you can read this interview that DearSusan conducted with me by clicking here.

For 2017 I set myself the challenge of street portraits. I’d been shooting street for a while, but never really gelled with the idea of going up to complete strangers and asking if I could take pictures of them.

I had nothing against street portraiture, no purist it’s not street if you ask mentality and I had no pseudo decisive moment only narrative about my work. No not at all. It was one simple thing – I just felt embarrassed and scared to ask.

You see I’m quite blessed from a genetic point of view when it comes to street – I’m probably the most nondescript man in existence, of course in the most part this has been a hindrance in life – having to move out of everyone else’s way in crowded malls, I’ve had bosses that forget I work for them, but when it comes to being all but invisible with a camera, or at least non-threatening looking with a camera, the physical un-description I possess has been very helpful.

I wanted to try street portraits, but I was afraid to ask – what if the potential subject, scowled, laughed or worse still, said no?

I needed a nudge; I needed a little bit of good fortune to get me on my path.

Perusing one of my regular locations for a bit of “street” I turned down the proverbial (and literal) dark alley way, where I happened upon these guys playing cards in the street.

The quartet stopped, dropped their cards and looked at me in unison… 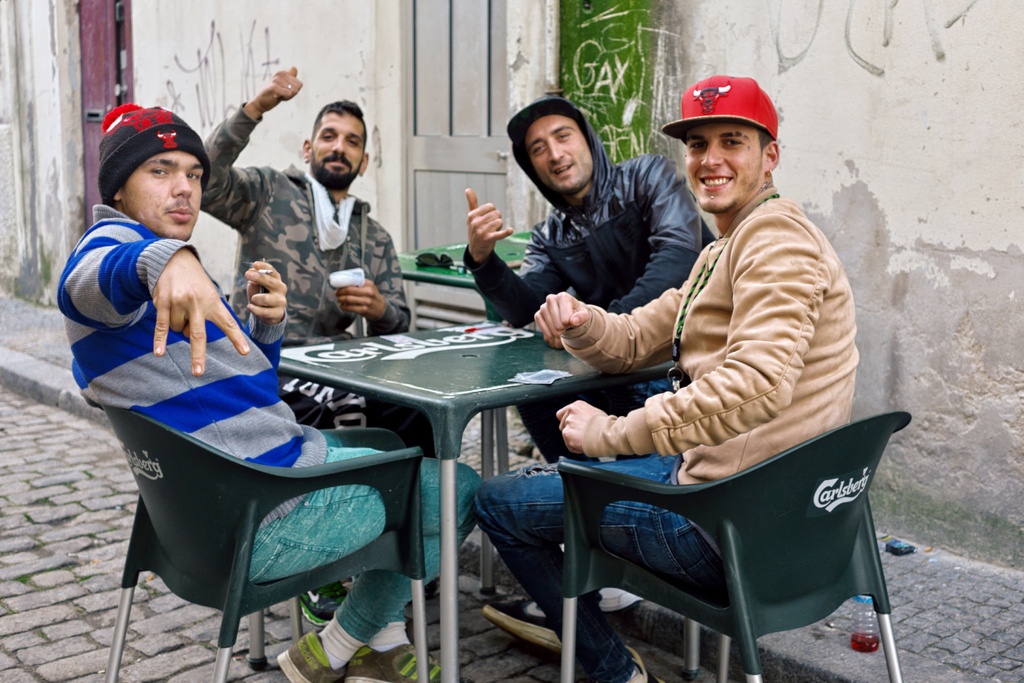 I was happy to oblige and they seemed to like the shot.

That experience wasn’t so bad was it? I mean I know that opportunity came to me, but it suddenly seemed to be the most natural thing in the world, shooting strangers who are actually aware that you’re shooting them.

Buoyed by this engagement, I made a pact with myself to ask as many people as I could, if they’d mind me taking a shot of them.

About 10 minutes after being propositioned by the guys playing cards, I found three ladies enjoying the winter sun. They seemed both bemused at my request for a photo and amused at my attempts at Portuguese.

However, they said yes. 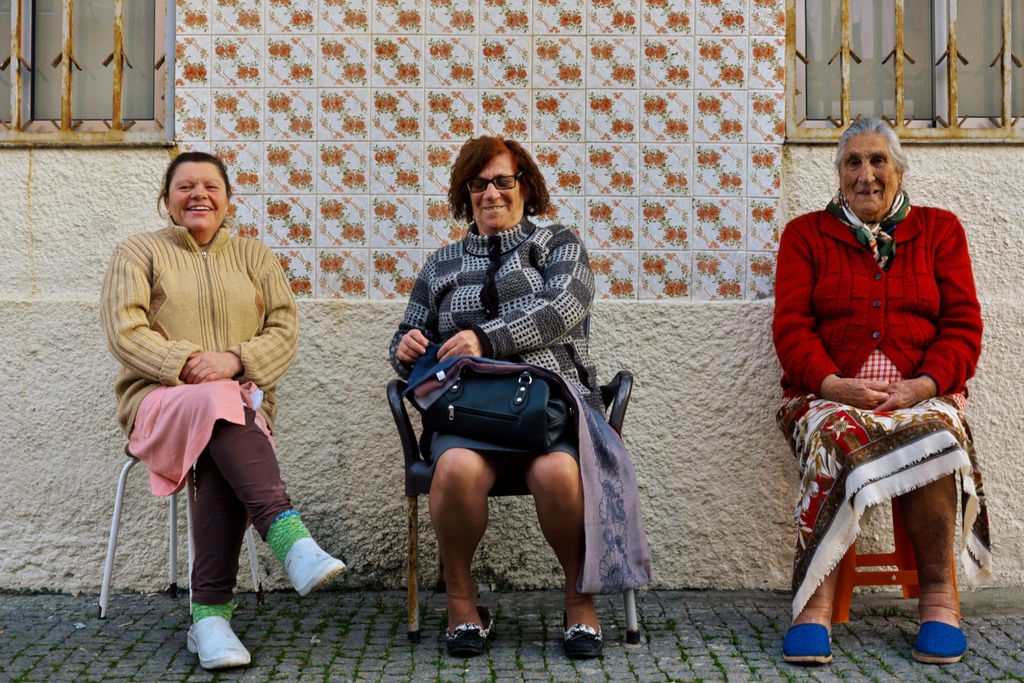 So I had scored my first true street portrait, the world hadn’t ended – I hadn’t died of embarrassment. I was set and on my way.

One of my favourite street haunts is the Mercado do Bolhão – to be honest this location has probably seen more photos taken there than it has seen apples being sold (and they sell a lot of fruit), Henri Cartier-Bresson shot there, the tourist guides take you there – it’s a location synonymous with people holding cameras.

So what better place to ask some people, (who’ve seen plenty of folks with cameras), if I can take their picture.

I asked pretty much every stall vendor for a shot and they nearly all said yes.

I was actually spoilt for choice.

This was my favourite from that visit to the market. 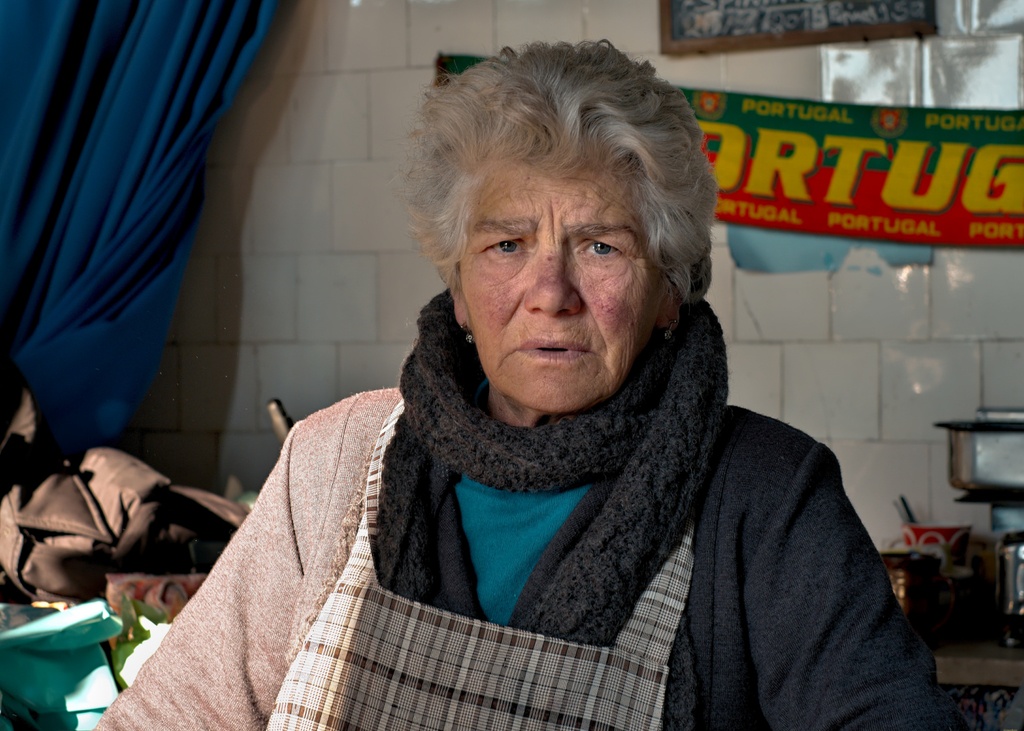 I had some portraits – but it was time to take it to the street.  After all, shooting in a place where tourists outnumber locals by quite some margin was a bit like shooting fish in a barrel, or perhaps more accurately, shooting fish on a market stall.

On a roll from my easy shots at the market place, I hit the street looking for anybody I thought would make a good photograph.

It didn’t take long to find someone: 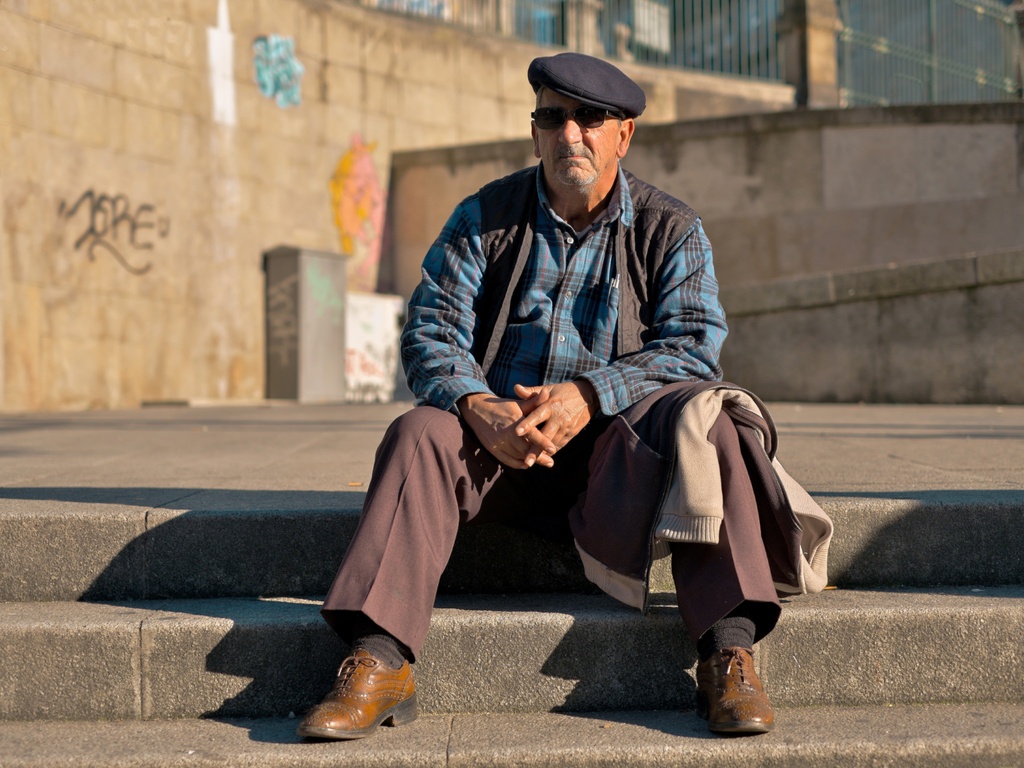 The next time I was out, I didn’t bother with the warm up session at the market; I headed to another tourist hotspot, São Bento railway station.

So far I’d mainly shot older people whose faces made for an interesting picture.

I wanted youth. Youth were a bit harder to convince. 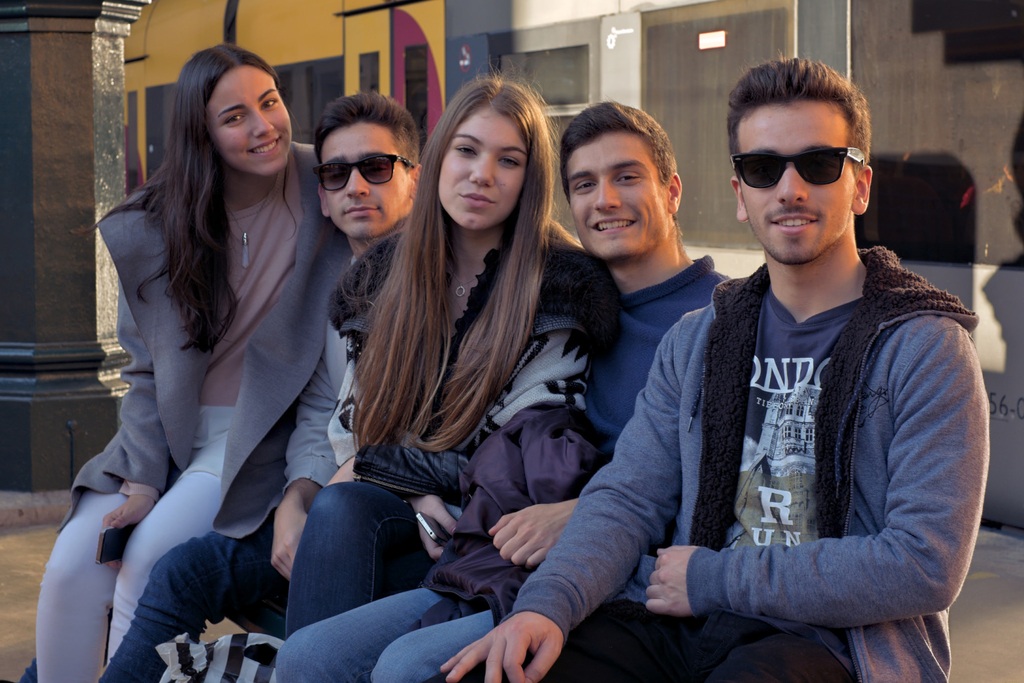 However, once the girl in the centre saw the camera, she became very interested, curious, and keen to have a closer look. I was shooting with a Fujifilm X-Pro2 and these cameras don’t really look like too many other cameras. This just happened to make my camera a conversation piece and my seemingly bizarre request for a photograph became a kind of transaction… “Of course you can take a look at my camera, yes that’s right that dial controls shutter speed; so how about that photo guys, are we cool with that?”

Time went by and I’d shot many street portraits. I’d made a journey from happenstance, to tentative request to emboldened street documenter. I’d migrated from Hmm they look like they might say yes to wow, look at that face – I want a shot of them

I now wanted to experiment with context, and by context I specifically wanted to attempt to show a genuine fact about the person in the shot. 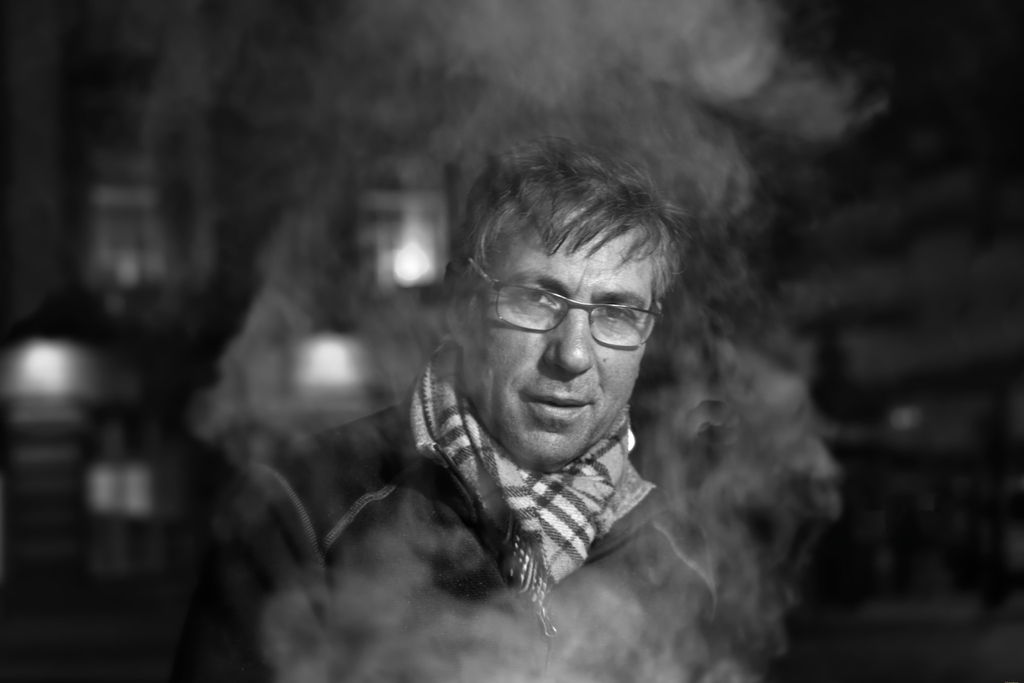 This guy was the only one (of three) street food vendors that was happy to pose for a shot (the other two ran for the hills the moment the camera came out).

I’ll hold my hands up here and admit, I’ve failed miserably to show the viewer that he’s operating a street food cart!

I chewed that failure over in my mind for a while. Whenever I have a bit of a lull in my street work – I usually head to Mercado do Bolhão and shoot in familiar territory, with people who don’t bat an eyelid at a camera. 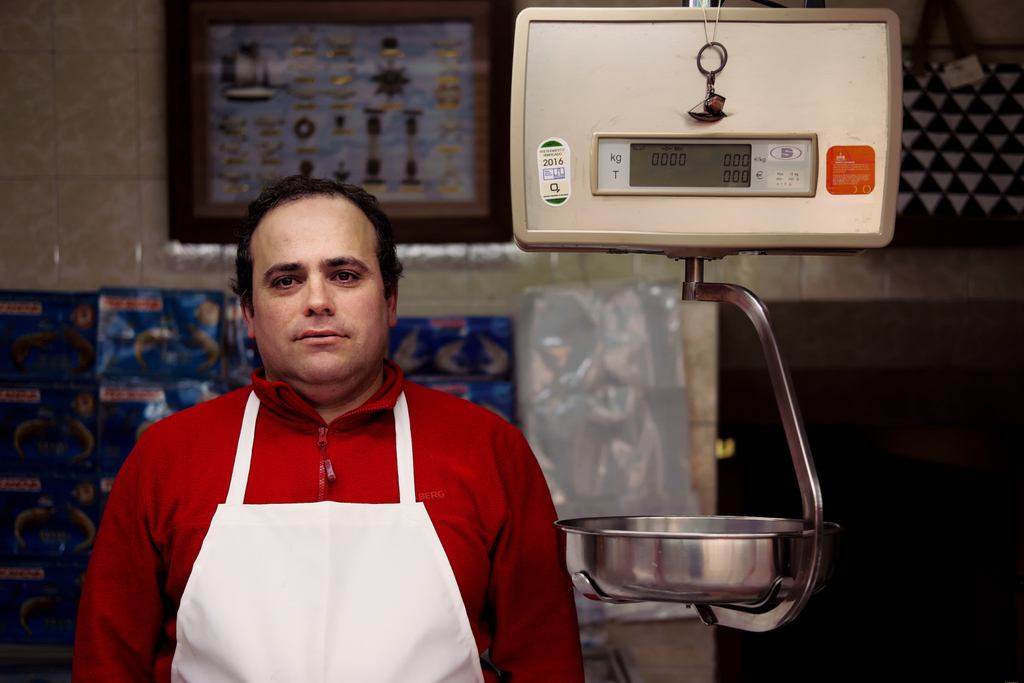 Here at least we have a clue what the chap does for a living!

I started to look out for people who looked interesting, and could offer something above and beyond their face (even if their face was a good enough reason to shoot them). 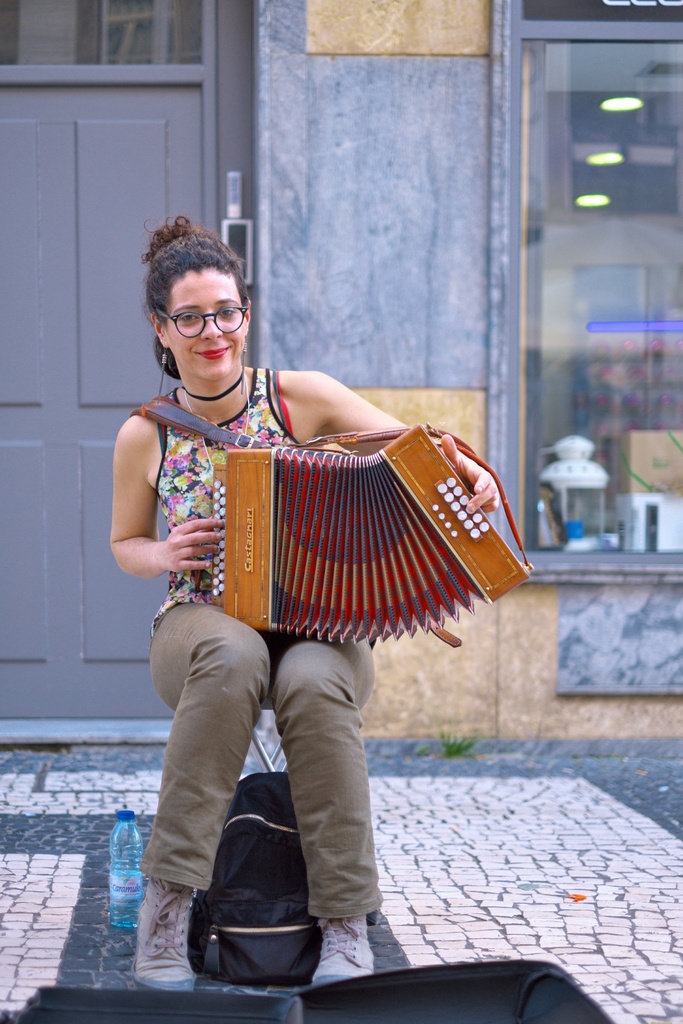 Possibly the most visually interesting of these was a bit of an accident, this next guy photobombed something else I was shooting and gave me a few moments to make him the picture. 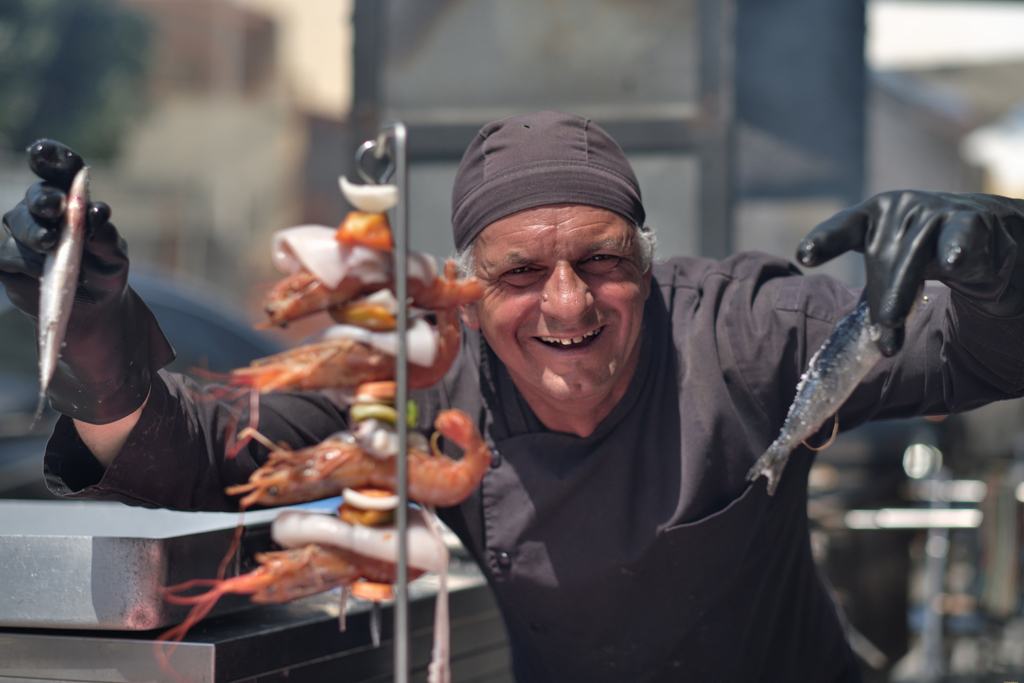 Despite the seemingly condensed nature of this piece, I’ve actually covered many months of street portraiture attempts.

By this point I felt really quite comfortable with it. It didn’t matter now whether it was contextual portraits or interesting face portraits, I felt I could do either, that I didn’t need to favour one over the other.

I felt comfortable approaching pretty much anyone, doing pretty much anything and ask – please don’t misconstrue that as some sort of self entitled belief that I have a right to stick my camera in people’s faces, it’s not that at all, just that you can always ask – some times you get, but if you never ask – you never get. However, common sense must play a part – for example I never bother to ask the guys peddling contraband or couples having a blazing row  🙂 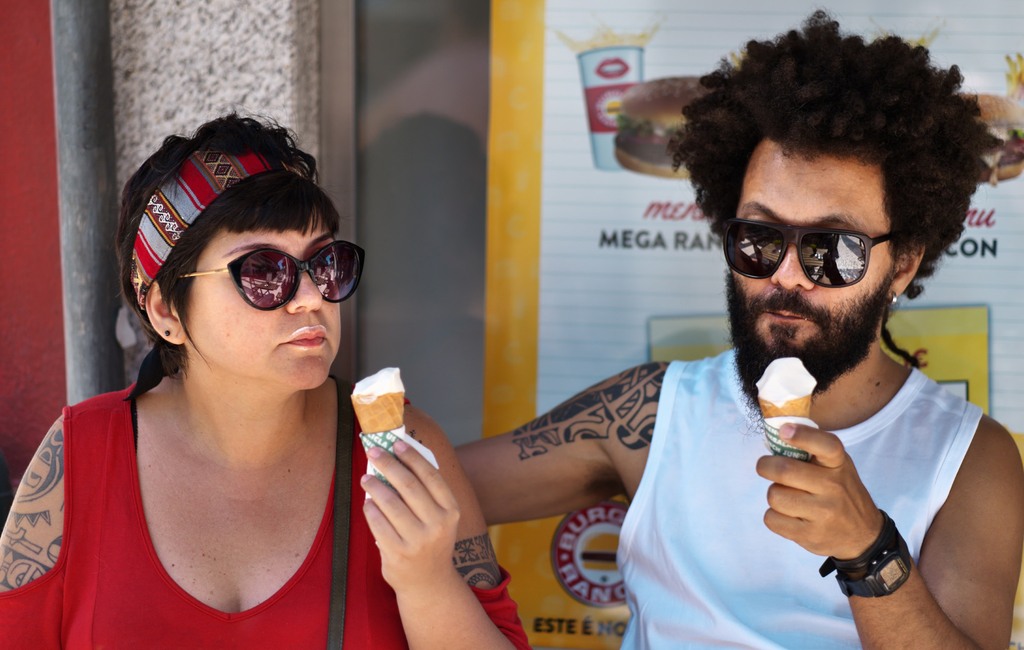 Several months ago, I’d have never asked for this – they’re busy, she has an ice cream moustache, like there’s any chance that they’re going to say yes.

Previously, when I was merely looking for people who might say yes – I’d discount people who looked like they’d say no.

I don’t so that now – they’ll tell me no, it’s not my job to second guess what people might agree to. 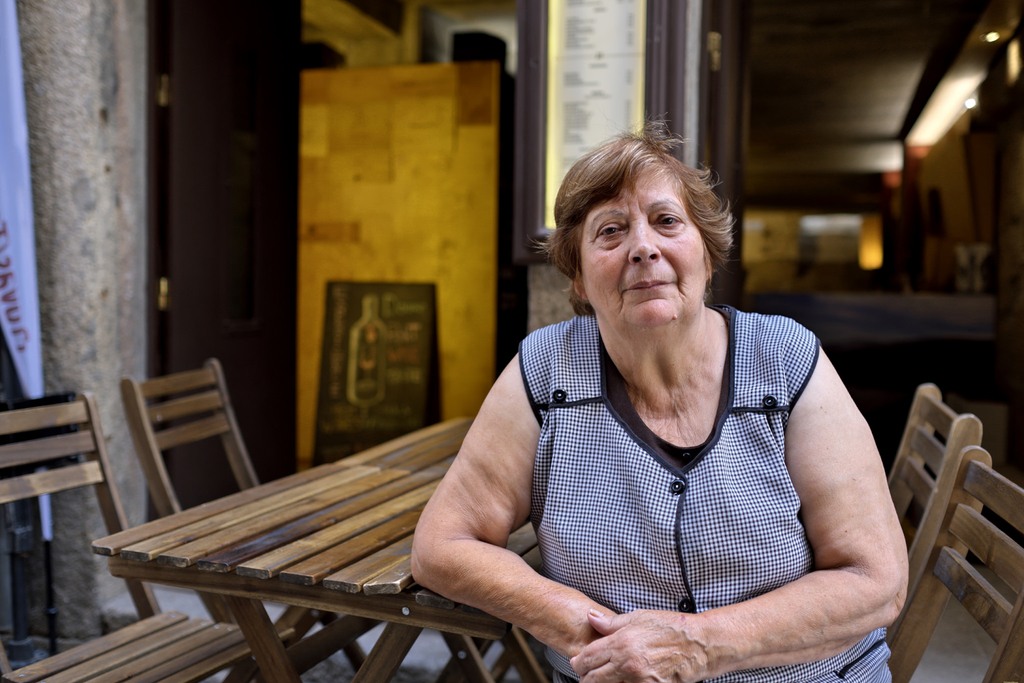 She didn’t look like she’d say yes before, during or after the photo. But she did. (In fact ‘yes’ was the only word she uttered the whole time I was there, usually they at least ask why?)

I attended my first ever Pride March, (perhaps worth a write up in its own right….) but certainly a great place to capture interesting faces. 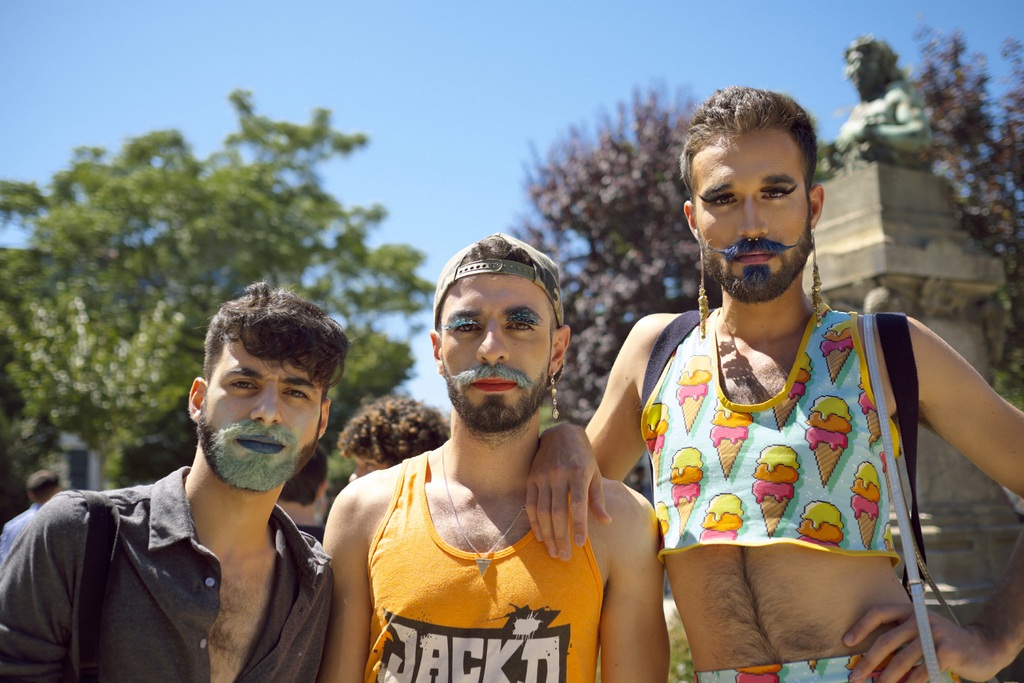 By now I’d started to experiment with influencing the shot a little bit, can you tilt your head slightly stuff like that, I’ve also started to try and elicit a facial expression change, things like hanging on a moment before hitting the shutter.

Doing that – achieved this: 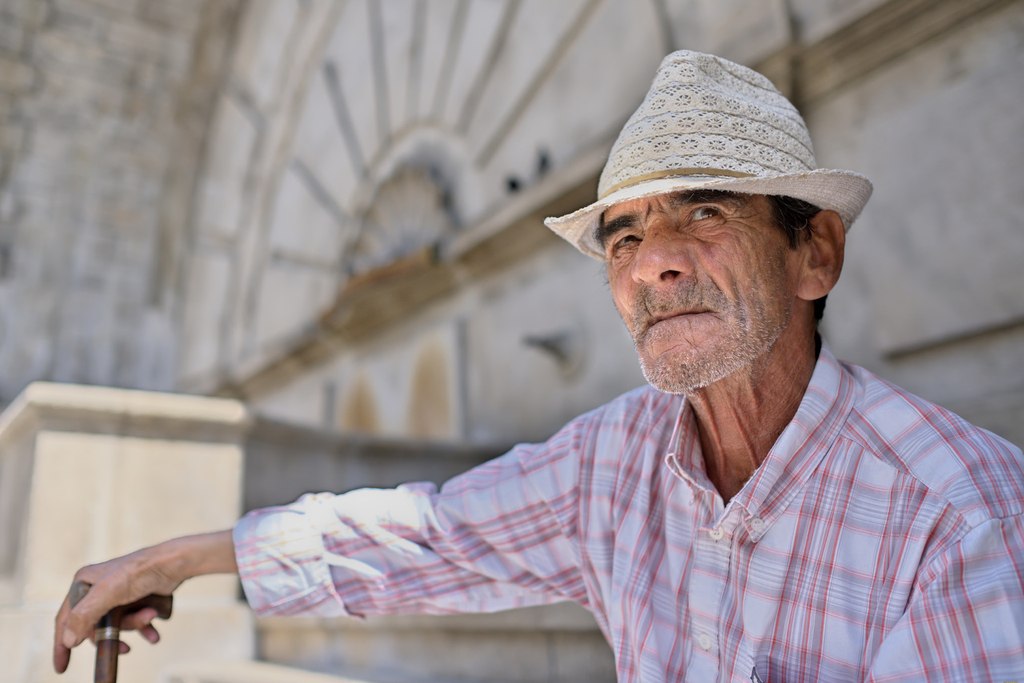 All in all – I’m very pleased that I embarked on street portraits. I haven’t just photographed these strangers, I’ve often chatted to them as well, in one case I ended up spending all afternoon with a chap who was a genuine pilgrim, walking from Portugal to Spain. Fascinating guy.

I’ve got social media friends and followers from shooting strangers; I’ve had people search me out to see my work off the back of me taking their picture.

But perhaps best of all…. I took something that I had trepidation about and was fearful of and I embraced it. This is good for the soul!

I’ve leave you with some tips

About the author:
I’m a semi-professional event photographer but better known for my tutorials and musings on Fujifilm’s X-Pro range of cameras. For money, I’ll shoot what you ask me, but for pleasure I’m a documentary photographer with an urban/street bias. My highly verbose website can found at http://adambonn.com or if you want to just see my pictures, try Flickr or Instagram

#920. I nominate Singapore as an undestination.