Cathy is a photographer I met through the Facebook group Cape of Storms – essentially Cape Town-based amateur and pro photographers, mostly shooting urban and rural landscapes.

In the year or so that I have known her, her work has improved radically, signposted by her posts on Facebook, referencing photo workshops she has attended and experiences she has gained. I asked her to tell us her story.

My first camera was a Kodak Box Brownie which fascinated me as the image was upside down in the view finder. The only thing that interested me was taking the shot and winding the film round to be able to take the next one. By the time the film was taken to the pharmacy for processing I had lost interest, as life had swept me away to something new and interesting.

So, many years later when I picked up a camera again, the digital way was just so satisfying for me, as the photos rendered on the screen immediately. Now I could see my mistakes and could begin to look critically at how to improve my pictures. A short course at the ORMS School of Photography grounded me in the basics. Getting to know my camera and lens capabilities made me think of different ways of getting a better picture.

Once I had managed to master the mechanics of my camera, I took it everywhere with me. I became a real nuisance to everyone in my family, snapping photos at every family gathering. Eventually through trial and lots of errors I found a balance in portraiture. 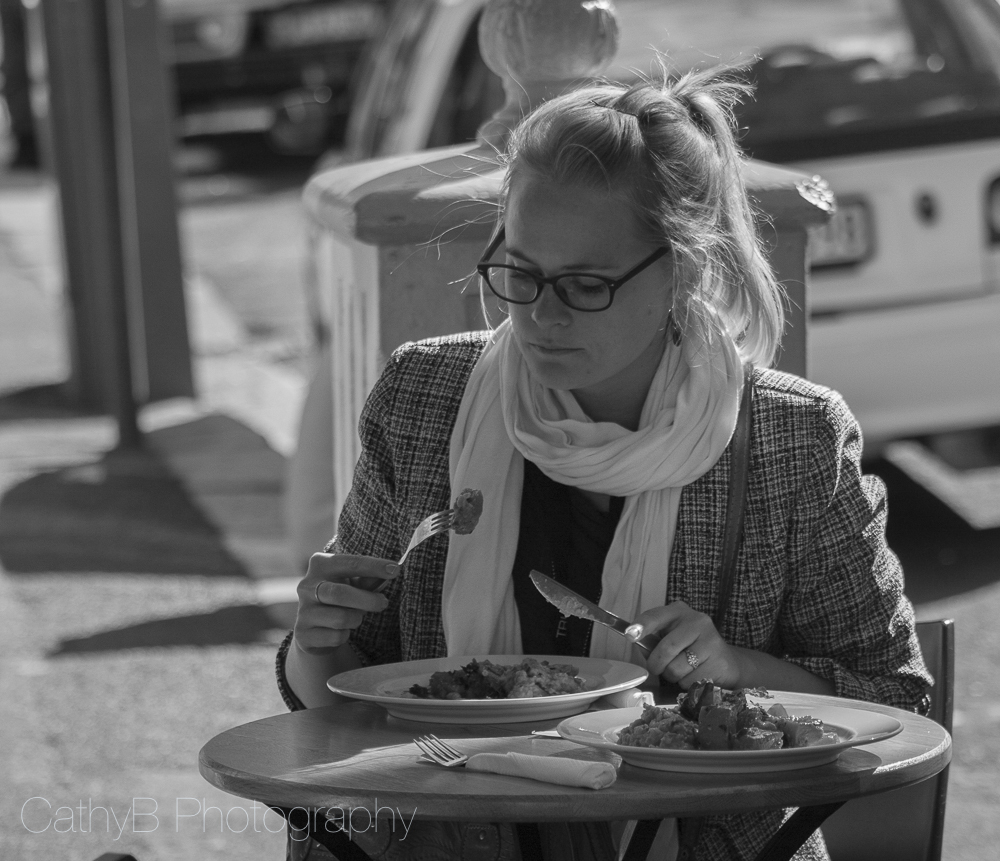 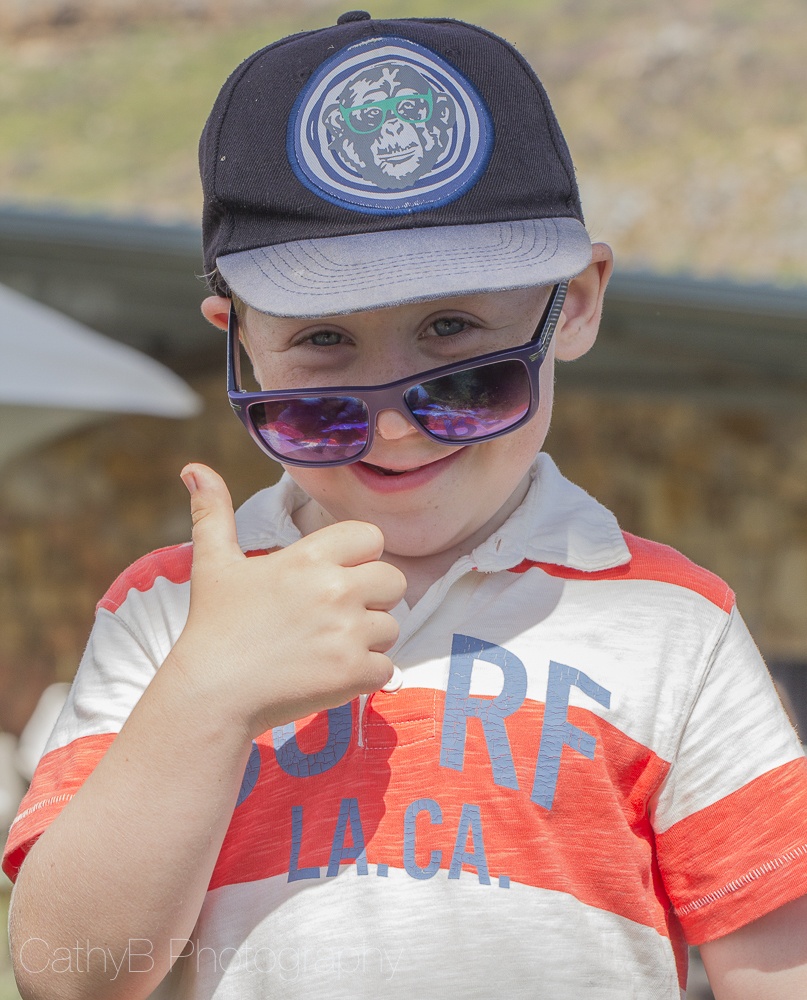 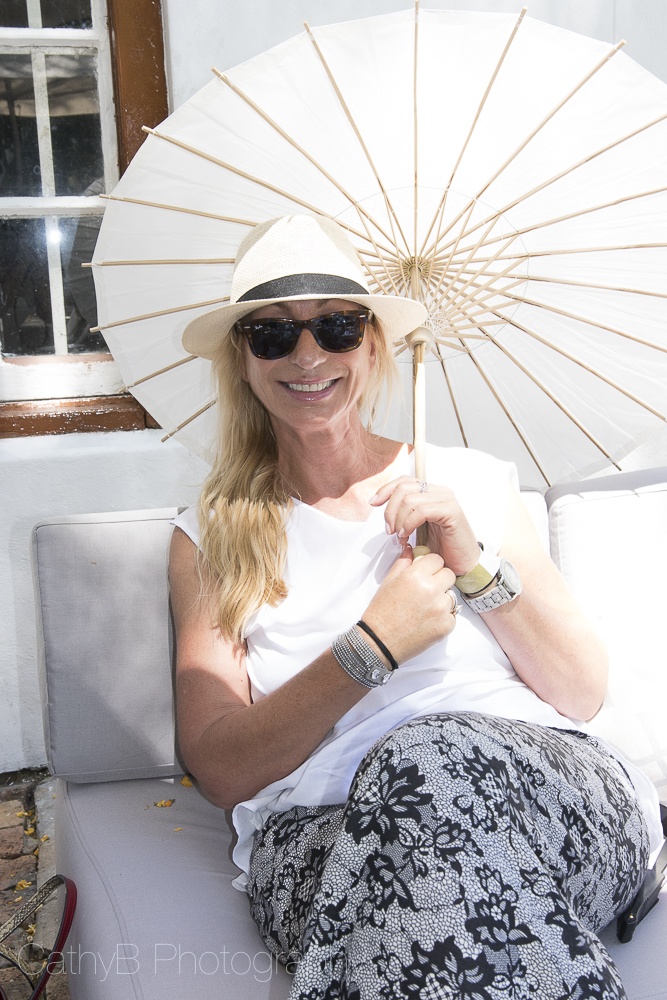 I was then given a macro lens at which point the real learning began. Finding focus in such a tight focal plane is quite difficult to achieve if you do not have a tripod. Through macro photography I learnt the value of a still camera.

A friend of mine asked me to join a photographic club, as there were some awesome macro specialists in the group. This was the first step in a very steep learning curve. Most of the photographers were professionals or very advanced amateurs and had cemented their genres. The generosity and sharing of knowledge in the group was such a gift to a budding photographer. Through these very special people I was able to take their wisdoms and gentle criticisms to heart. Each aspect of my photography was looked at with great interest allowing me to grow with an ease of mind and joy of heart. The willingness to share their time and great knowledge helped me step into other genres. Landscape was still the genre in which I had the most difficulty. I just couldn’t see the patterns in the shape of the rocks, trees and the movement of the waves.

I signed up for a course with a well known local photographer; Dewald Kirsten who lives in Worcester. We ended up on Kogelbay beach which is located between Gordon’s Bay and Rooi Els and borders the spectacular Clarence Drive, a 20km scenic route that boasts whale watching opportunities along largely undeveloped parts of the coastline. Slow shutter speed, focal point and a tripod dug into the sand were the most valuable lessons I learnt that day. I also developed a deep respect for Lee Filters. 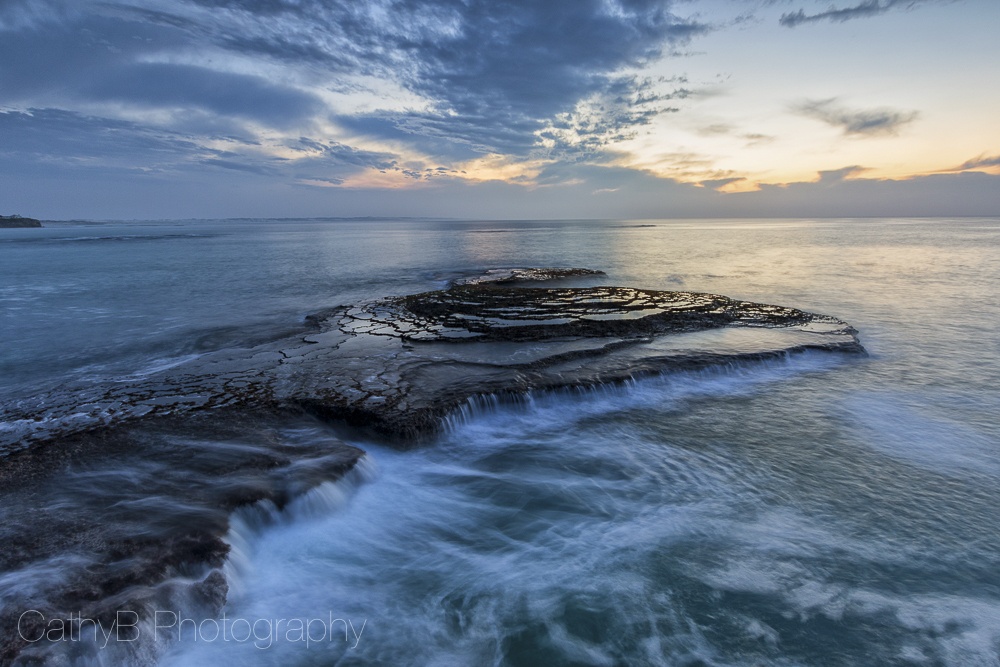 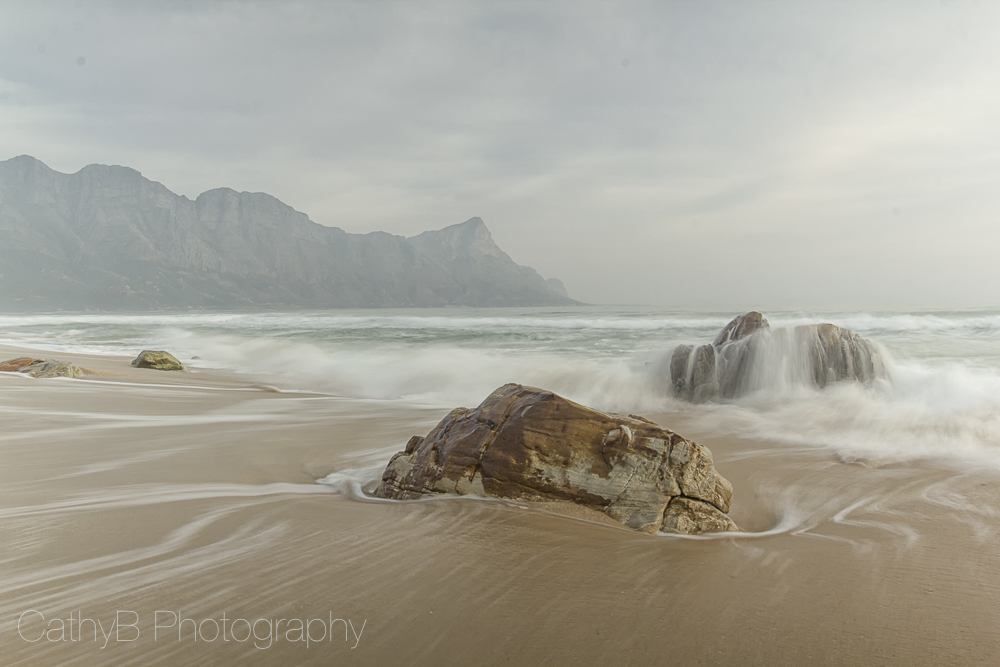 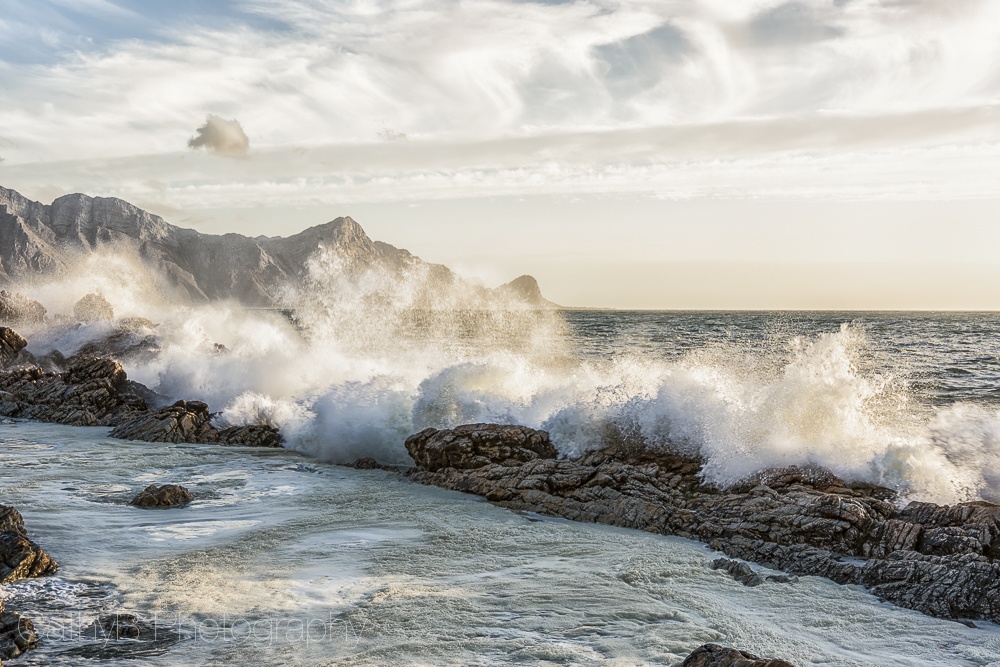 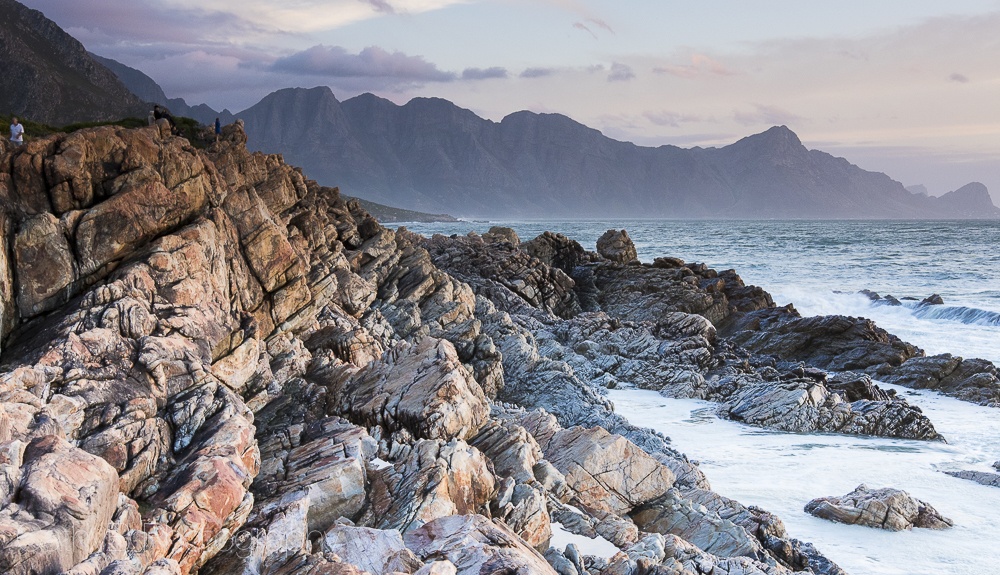 When I had my filters in my hands I felt confident enough to sign up for the landscape course run by Martin Osner, an award winning fine art photographer based in Cape Town. I couldn’t have asked for a more delightful experience. Martin is such a gracious teacher with years of photographic experience. Our class was an eclectic bunch of ladies from the ages 20 to 80 years, ranging in experience from novice to experienced amateurs. We each came away with a wealth of knowledge we could use to enhance our photographic enjoyment. The landscape began to speak to me and I began to see the patterns and the flow that would make a picture work. I finally understood the importance of fore ground interest, light balance and what holds the eye’s interest in a picture. I also came away with an understanding of Lightroom, Bridge and a smattering of Photoshop.

The act of cataloging my collection now began to be an issue. Space in my computer was filling rapidly as I was just taking too many photos. Thanks to my ever-patient husband I was able to understand the value of an external hard drive and how to keep my computer free of clutter. Now editing my photos became hassle free and I no longer suffered Lightroom crashes. But the issue of taking too many photos still hung around me like a fog. I was desperate to get the photo and I was still too quick with my shutter button – shooting in the vain hope of getting the shot. This desperation stuck to me like glue, particularly in one instance when I was trying to capture a landscape scene as if it was a bird in flight. I realized that I was applying the same techniques that I used in bird photography to landscapes. 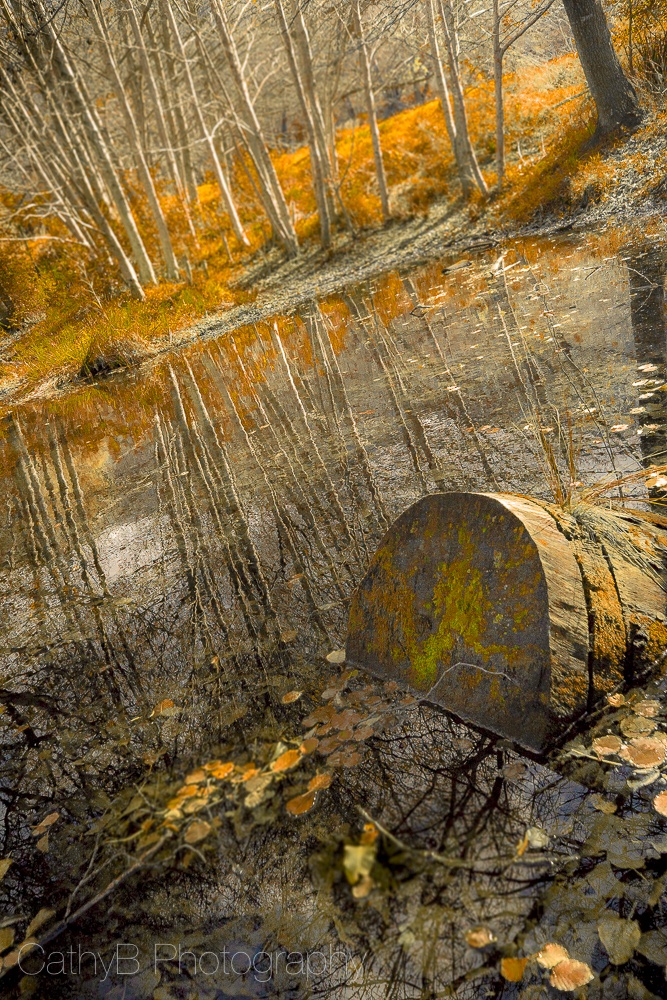 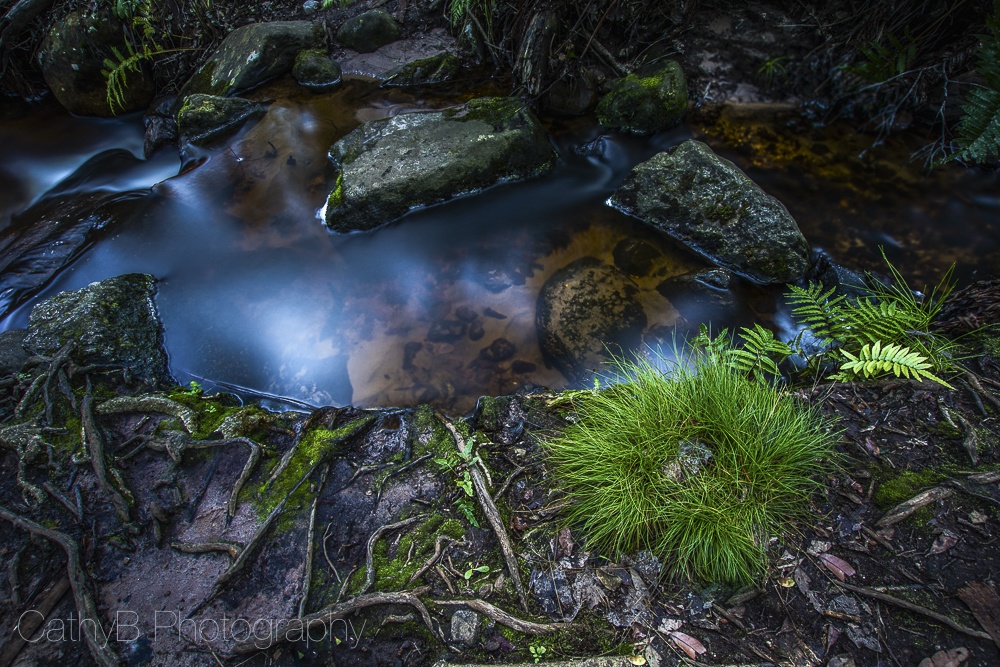 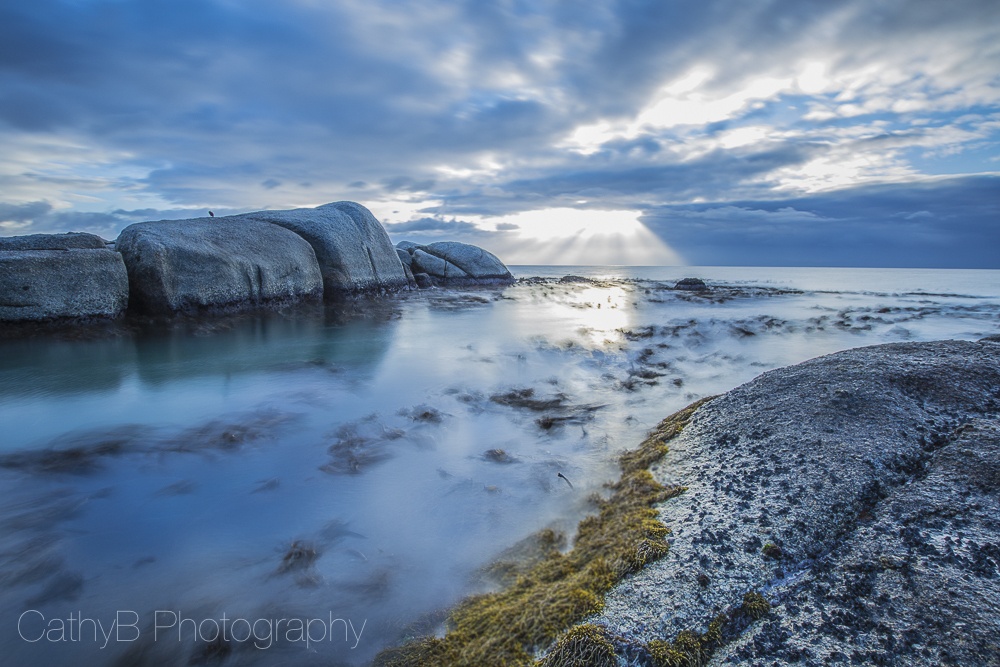 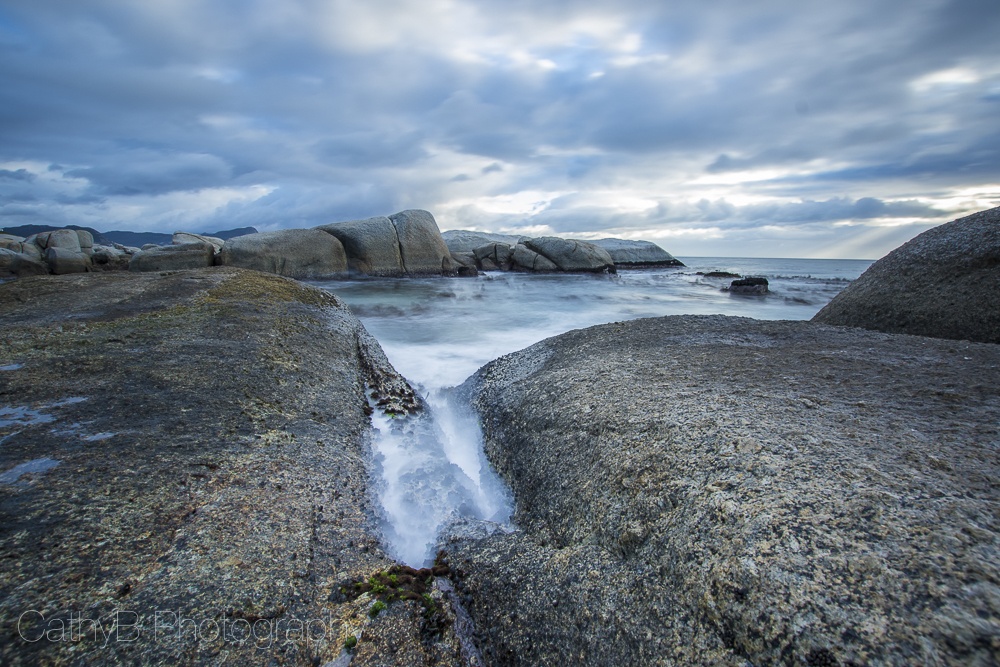 It was at that point that I attended a Wild Shots Symposium and listened to a talk by Hougaard Malan (the indefatigable genius) His theory of returning to a place time and time again and seeking to simplify the photo to its essence was a light bulb moment for me. He stressed this over and over in his talk and demonstrated it with the most spectacular collection of pictures.

He was not afraid to wait for the right weather conditions, the right light, the right tide changes and the ability to walk away when it wasn’t just perfect. It was a revelation for me. The fact that I didn’t have to get a fix every time I went out seeking a photo. I could wait. I could be considerate and I could return and the next time it might be the one shot that I would be happy to add to my growing portfolio. After attending one of Hougaard’s courses I was able to scan through my large portfolio and thin it out considerably. My eyes began to seek simplicity. I no longer tried to fill my photos and anything that didn’t apply to the rule of thirds was deleted. Looking at my photos from this perspective calmed my frenetic search. Landscape photography began to be a real enjoyment for me. I began to slow everything down, take my time in setting up and really looking to find the ideal spot. I really thought about the shot before I took it, visualised where the shadows were, what the light was really doing, how the waves would create the movement in the shot. Waiting for the real shot to emerge was much more satisfying than the hurried activity I had been used to. 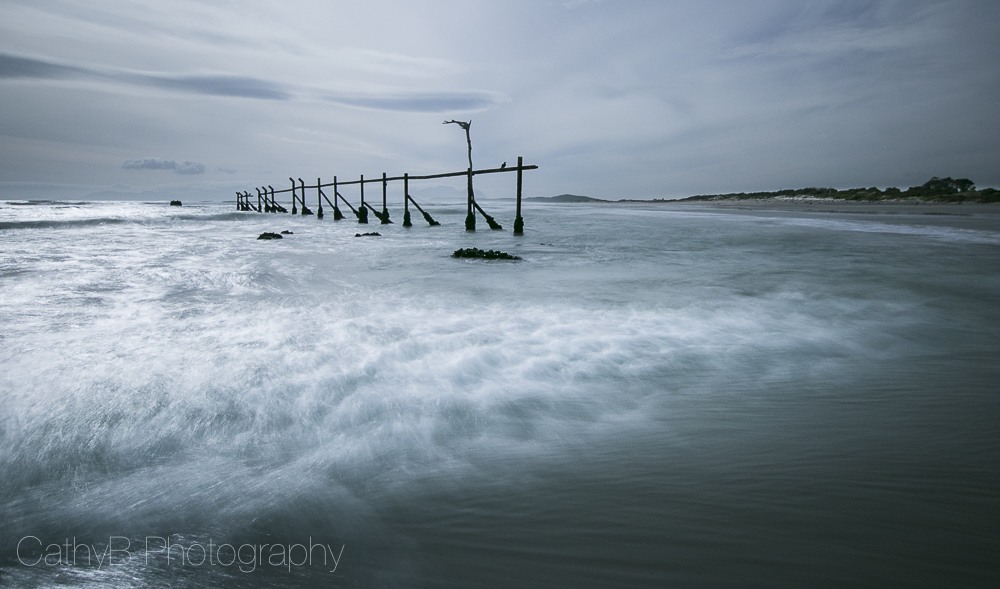 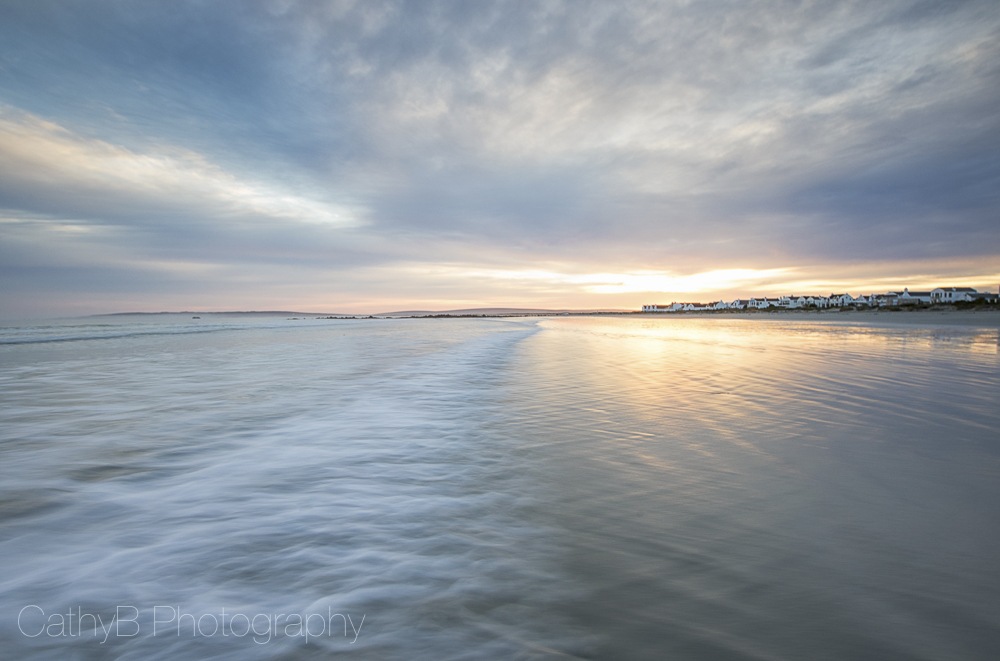 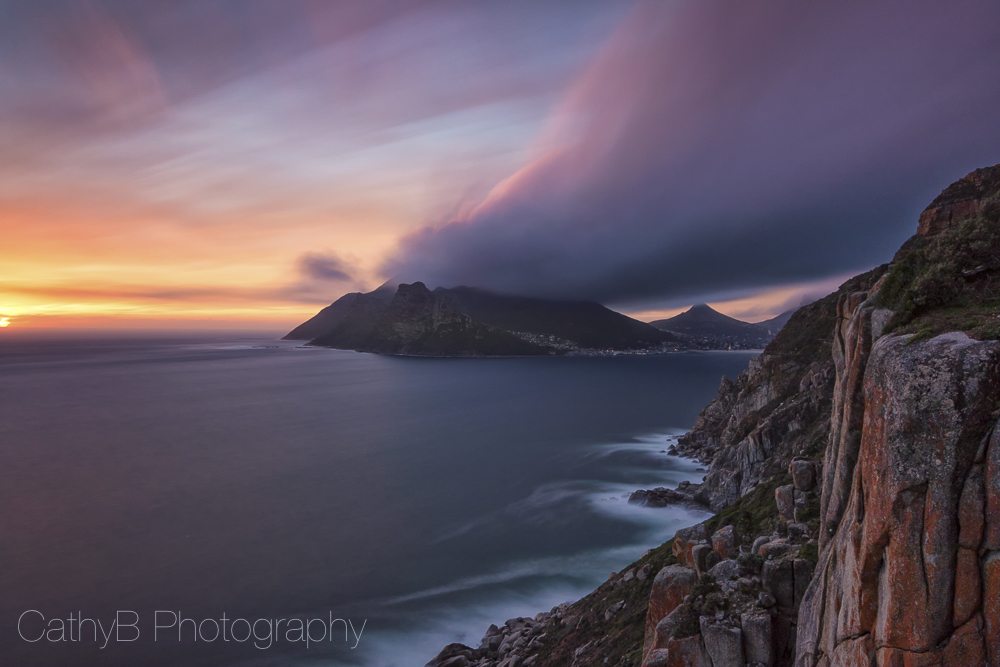 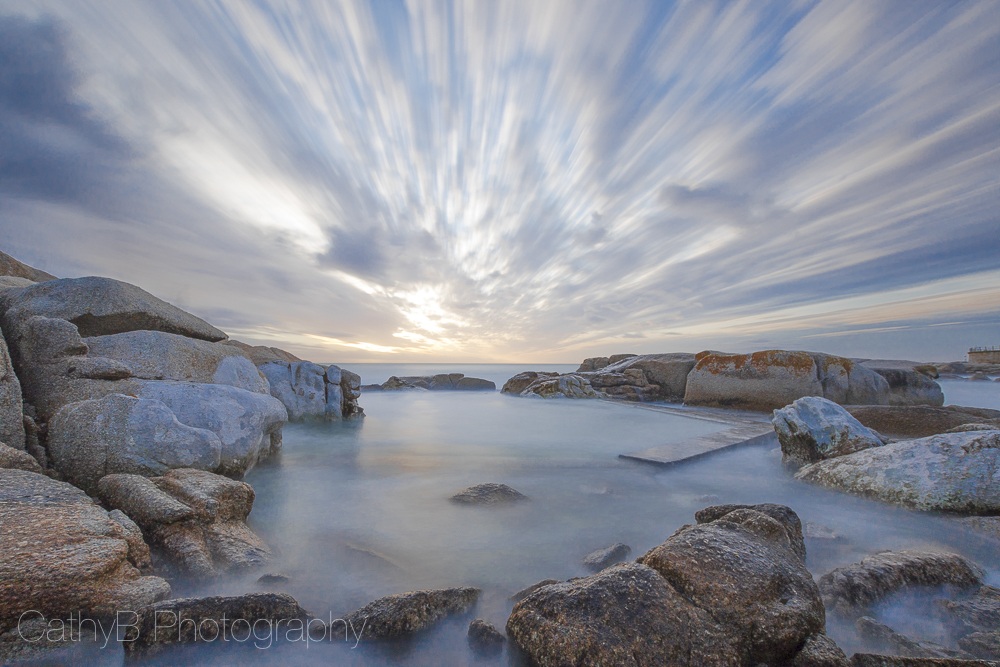 On a recent trip to Hole in The Wall with Hougaard Malan. I had the opportunity to use my new 5D mark IV and new Canon 16-35mm. What and amazing set up to use on such an iconic landscape. Hougaard was just phenomenal in setting us up a perfect balance in water movement, rounded rocks and iconic mountain and perfect cloud movement. We came away with great photographic material for our portfolios. I was so tempted to stay another week and when the next group moved in their clouds and light all came together for them. I was pink with envy as Hougaard posted his back of the camera shot with such pink and red burning cloud covered skies.

Thank you Paul for the opportunity to share my photography journey. I have had many helping hands that have steadied my tripod and corrected my settings! Every bit of wisdom I have gleaned from them has added more pixel enjoyment to every shot. 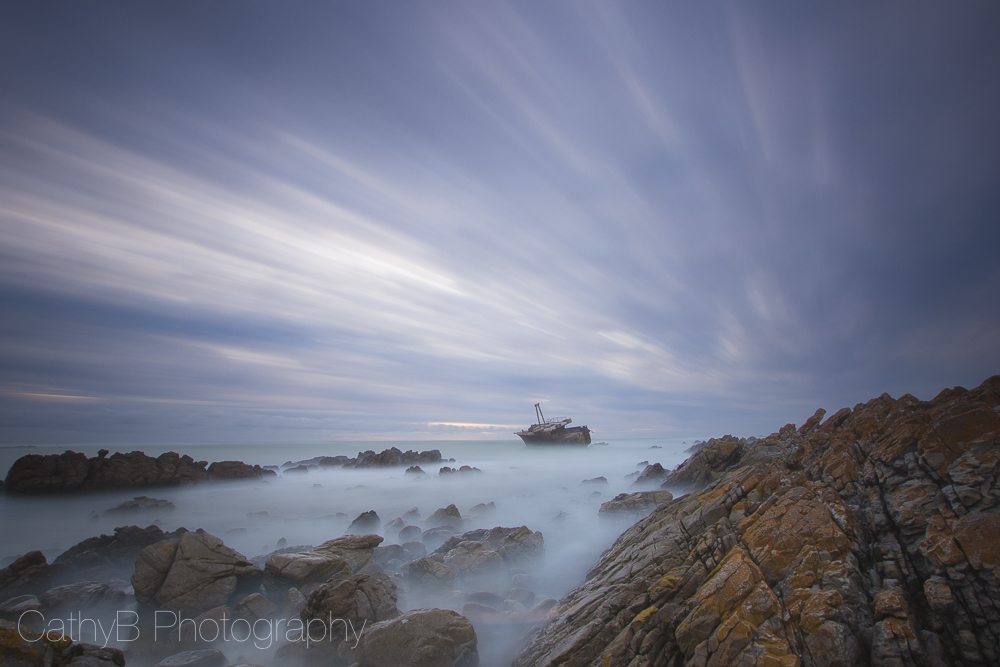 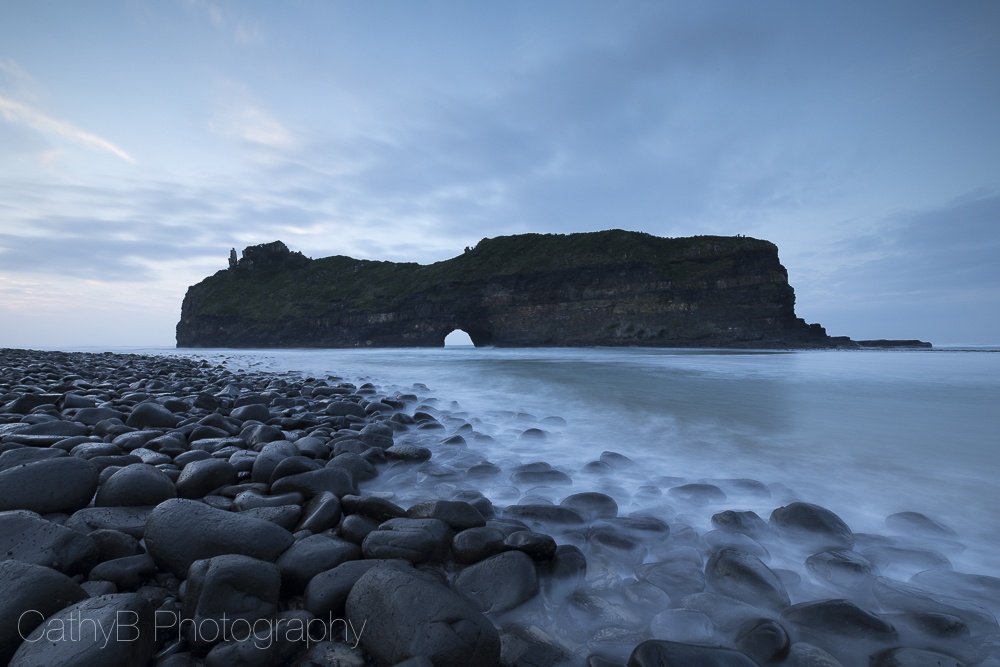 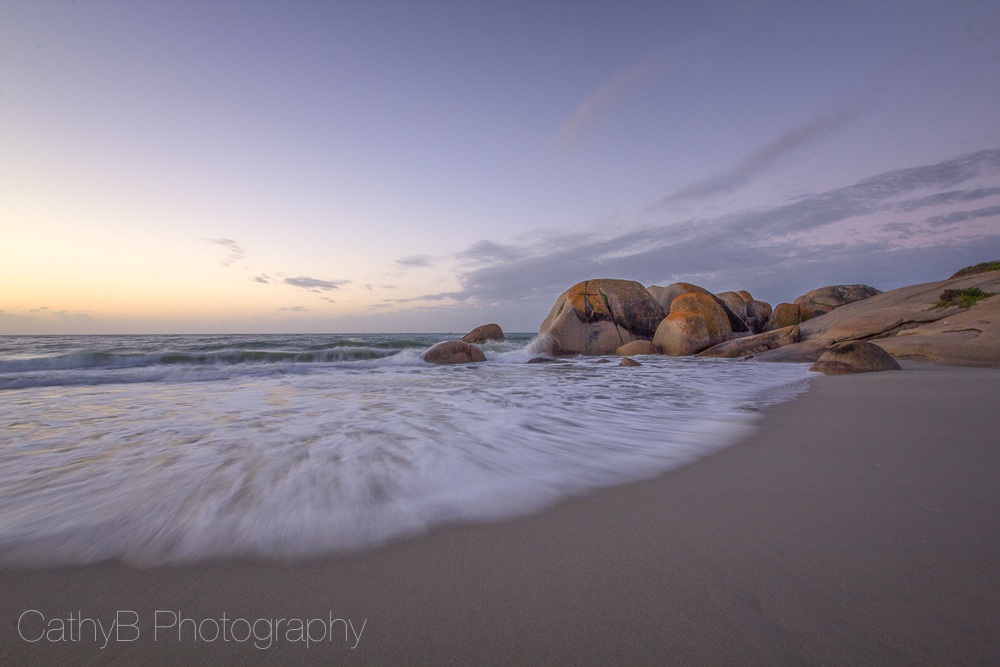 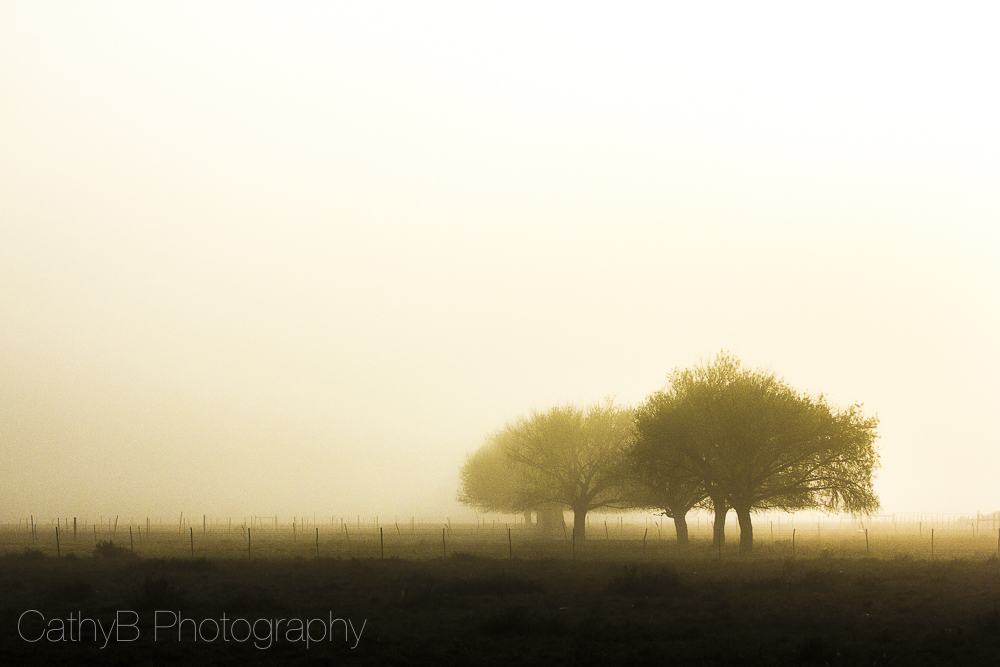