This is a new very interesting guest post by our now regular contributor Adrian. I think you’ll find the very personal perspective and strong images as profoundly compelling as I do. Thanks for sharing this, Adrian.

Until April 2017 I had not picked up a camera since June 2016, at the end of a period of travelling during a career break. During the previous 12 months I had accumulated about 1.5Tb of files, and was left with the herculean task of selection, post processing and house keeping of whatever hadn’t been dealt with along the way. It all came to an abrupt end as a result of family illness and the need to be primary carer, the post processing dried to an occasional trickle, and holding a camera never even entered my consciousness.

The pain of a particularly stressful period of life, the constant worry about a loved one, and the need to continue to earn took a heavy toll on my enthusiasm for photography. My photography is generally split between very “stock”-like travel imagery, street portraits, and physique sports. The latter is often a catalyst to travel based on competition calendars and the chance to meet friends in the sport, and so it was that on April 2017 I embarked on another contest-driven travel itinerary to south-east Asia.

Outside of competition halls and pre-arranged portrait shoots I rarely picked up my camera. For the first couple of weeks I put this down to jet lag, or being in not particularly interesting places, but by the time that I reached Singapore a couple of weeks into the trip, it was obviously that my “photographic mojo” had left me. I had planned to photograph some more stock in the city, perhaps finding some new locations for good views of the bayside skyline or the gardens by the bay, but I had no enthusiasm. As Paul Perton commented in his earlier article about Singapore, the very humid climate often saps all energy, and even moderate activity turns one into a sweaty sodden mess, which makes the everyday often feel like a huge effort. The weather often wasn’t conducive either. Often it rained and the sky was a white out of cloud, not great for stock photography where the ideal is a clear blue sky or a beautiful sunset. Although there was a certain freedom at not being enslaved to my camera, my lack of motivation started to unnerve me, and making me wonder what would trigger its return.

I had awoken to another morning of rain and a grey white sky, so I abandoned any plans for outdoor photography and decided to walk to Orchard Road, Singapore’s commercial heart. My route took me past the School of the Arts Singapore, a rather angular modern building of concrete and wooden cladding that is open at street level for pedestrians to pass through. Climbing a short staircase from the street brings you to a large open auditorium with a concrete dias as a stage, and more levels above that visitors are free to roam. For some reason I became transfixed by the combination of curves and angles of the interior, and the way the light from outside played across its surfaces, creating shade and tone on its blank walls. 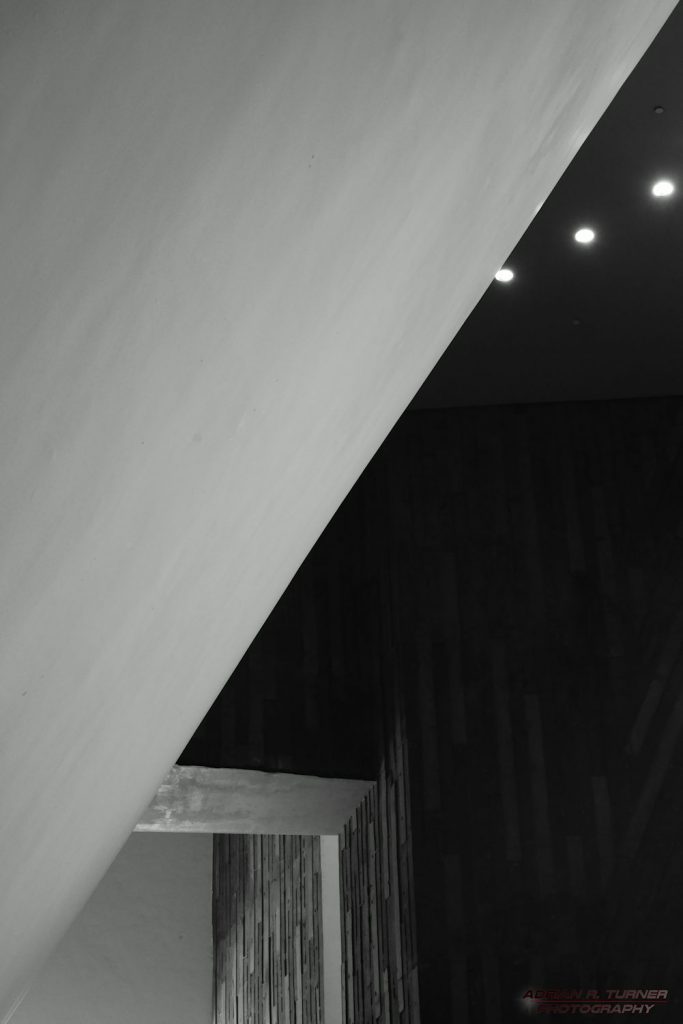 My pre-occupation with symmetry creates a diagonal composition with an exposure intended to just reveal texture in the surfaces. 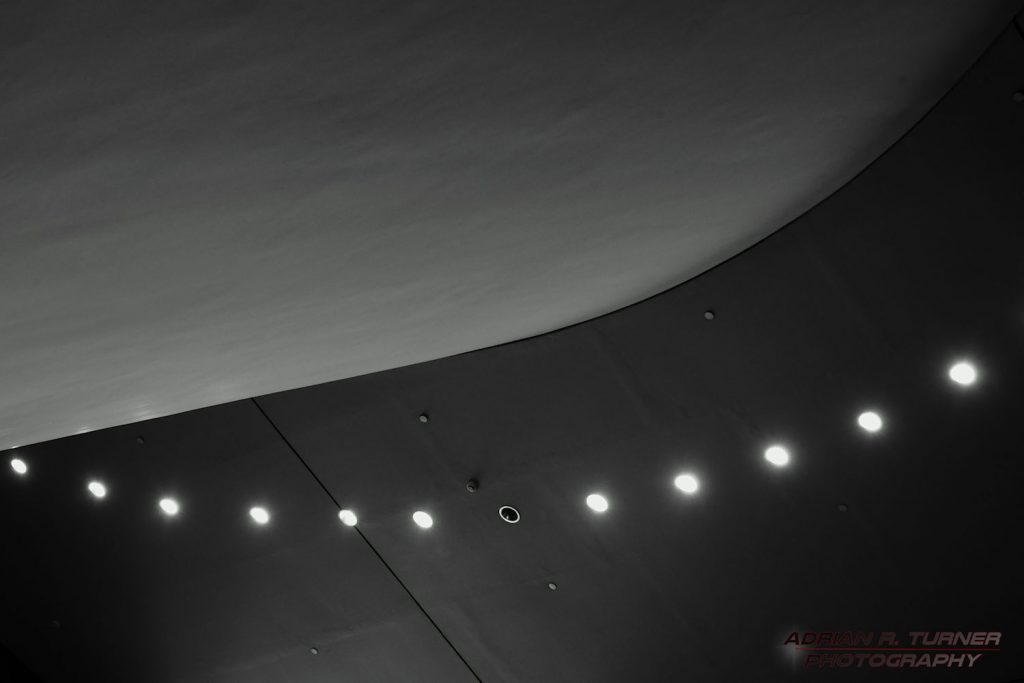 I was transfixed by the curves of the ceiling and lighting.

I find that photography can sometimes bring on a “Zen”-like state where I am engrossed in the act and other preoccupations and concerns ebb away. The effect can be very calming as it is an opportunity to be completely selfish and self-absorbed. I recognised that there were photographs to be taken there, and spent about an hour looking through the viewfinder with my camera set to black and white, letting the angles, curves and tone guide my compositions. It became an exercise in how to make interest from quite spartan views, which encouraged experimentation and new ways to try to compose and expose a scene. 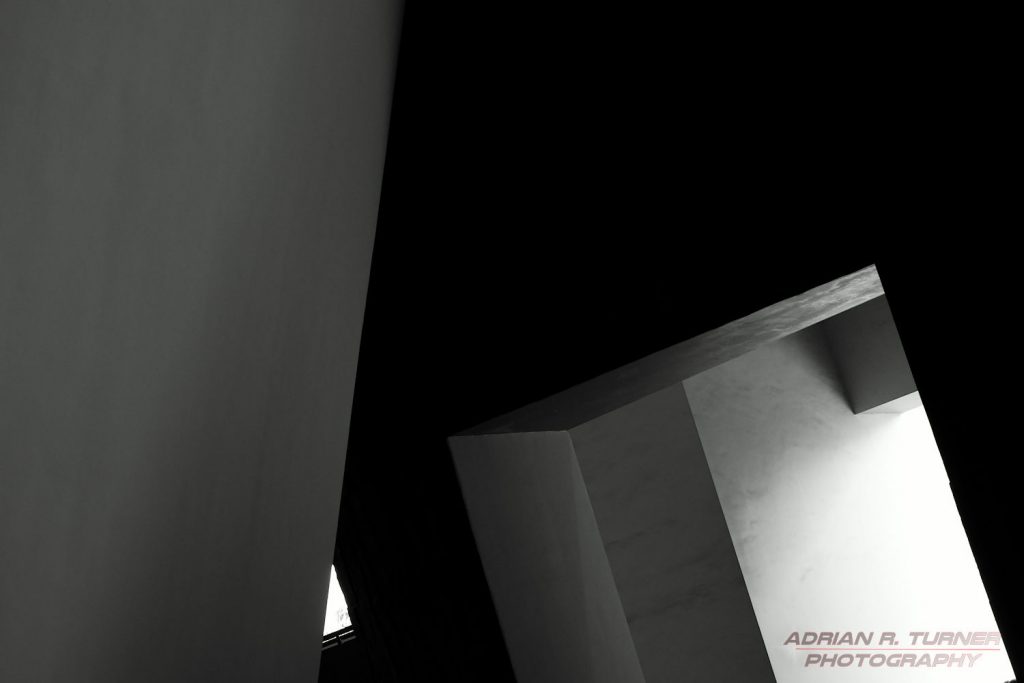 This photo used very high ISO but in black and white it poses no issue.

Inspired for the social media trend of “legs or sausages” 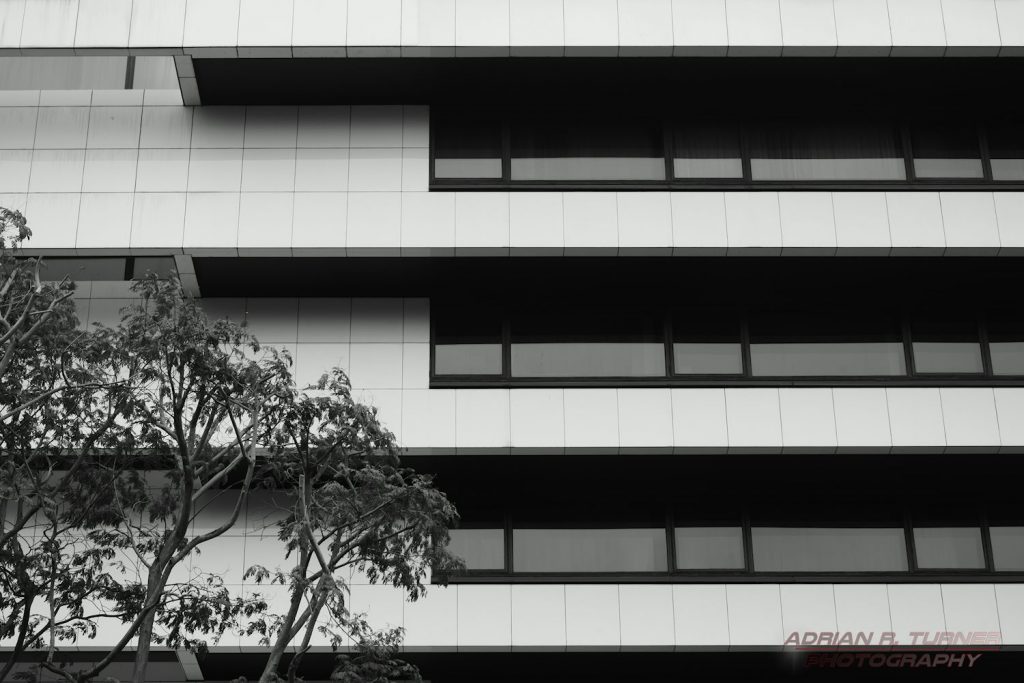 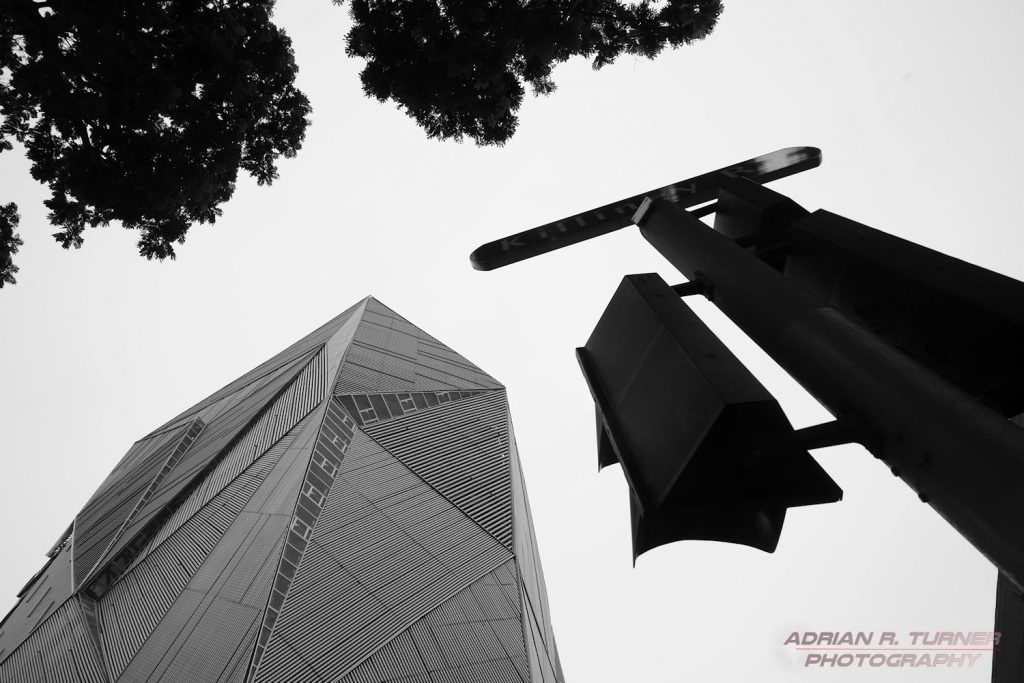 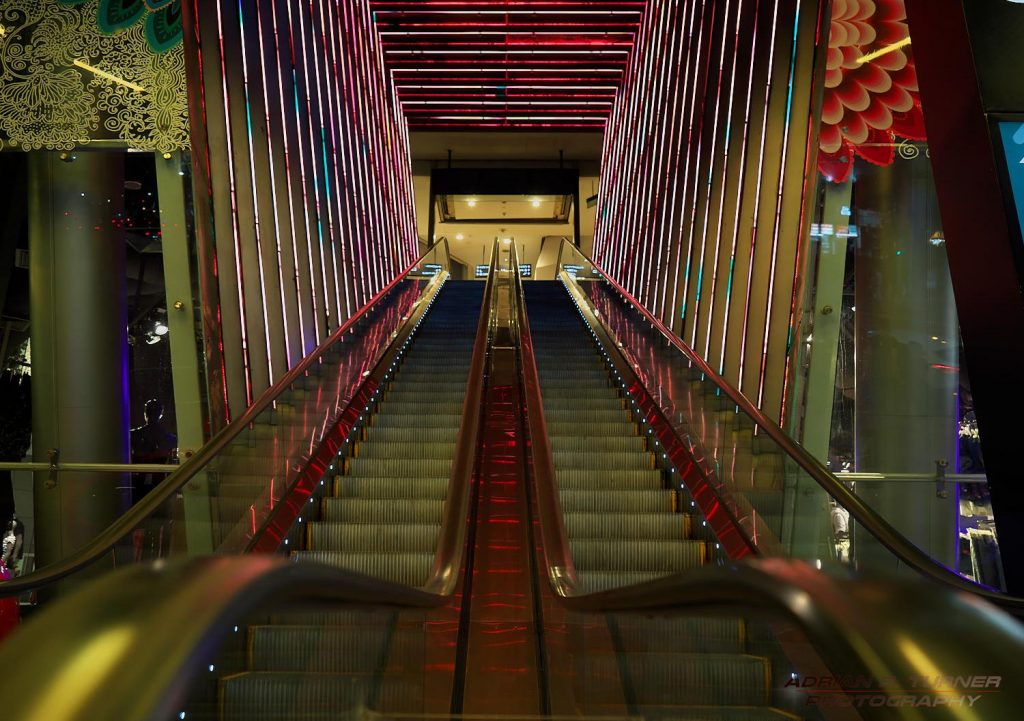 It was obvious that this subject needed colour to show it best. 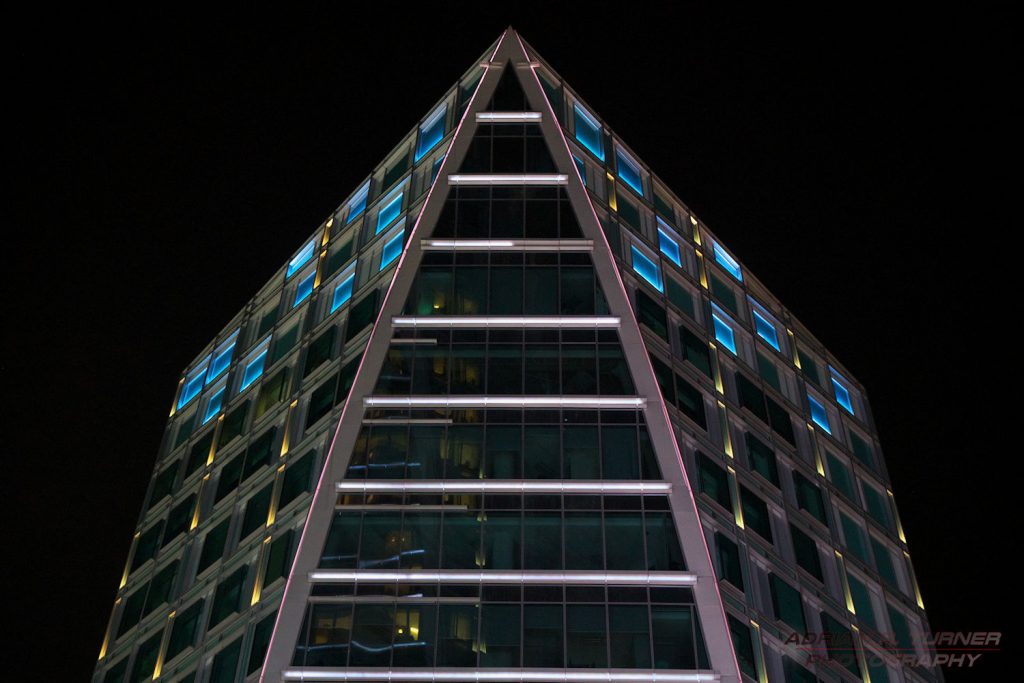 By the time I continued on my walk I felt somewhat revitalised by all these curves and lines I had been seeing, and for the next few days I intermittently picked at random architectural details. I’m often drawn to symmetrical compositions, so things with geometric details also tend to draw my attention. 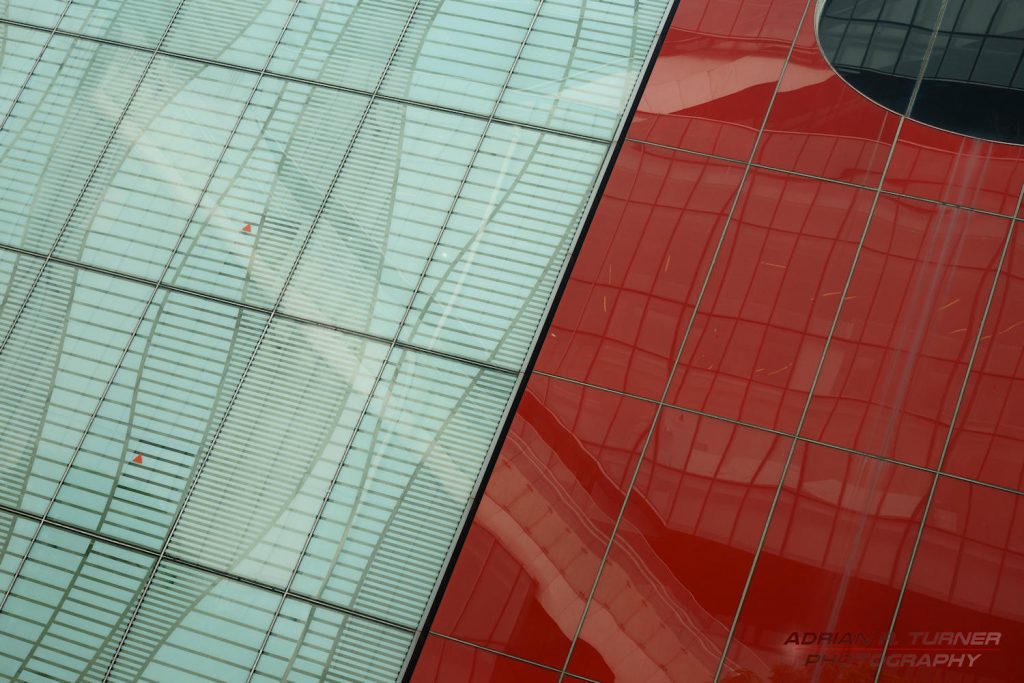 Leaving the colour helps to reveal the translucent quality of the glass façade of a shopping mall. 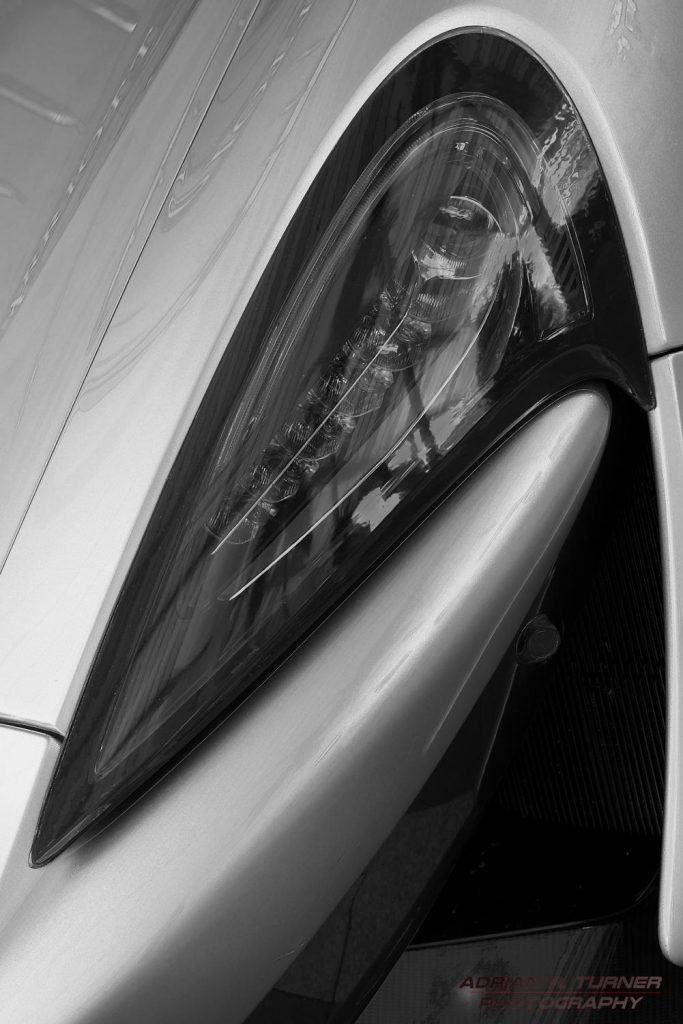 Removing colour can help to highlight shape and form. 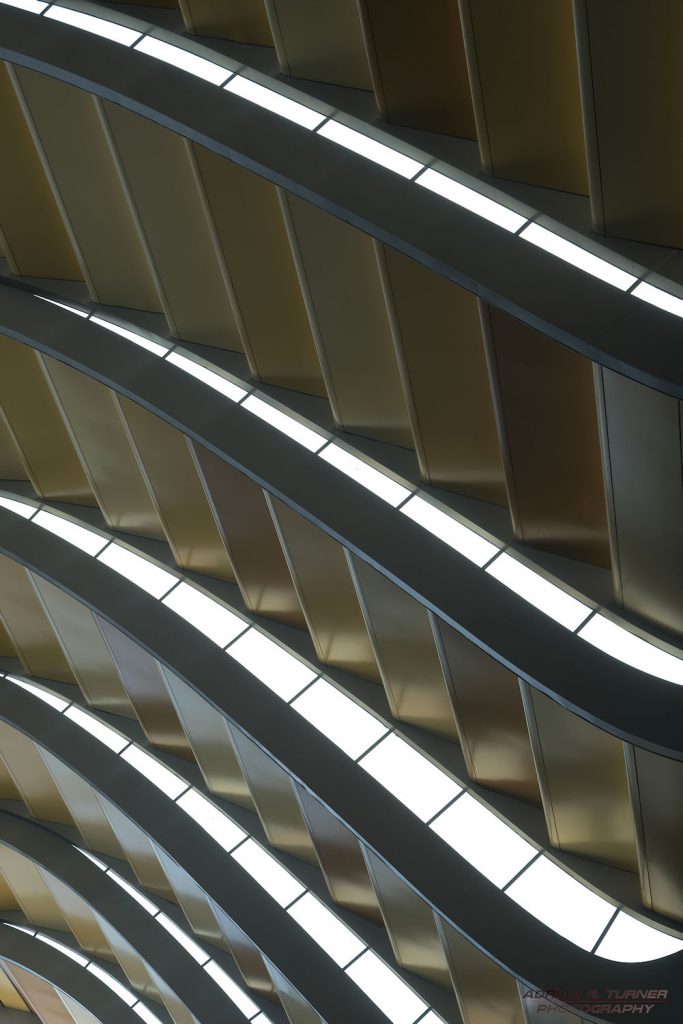 A gentle treatment to reveal subtle colour and tone 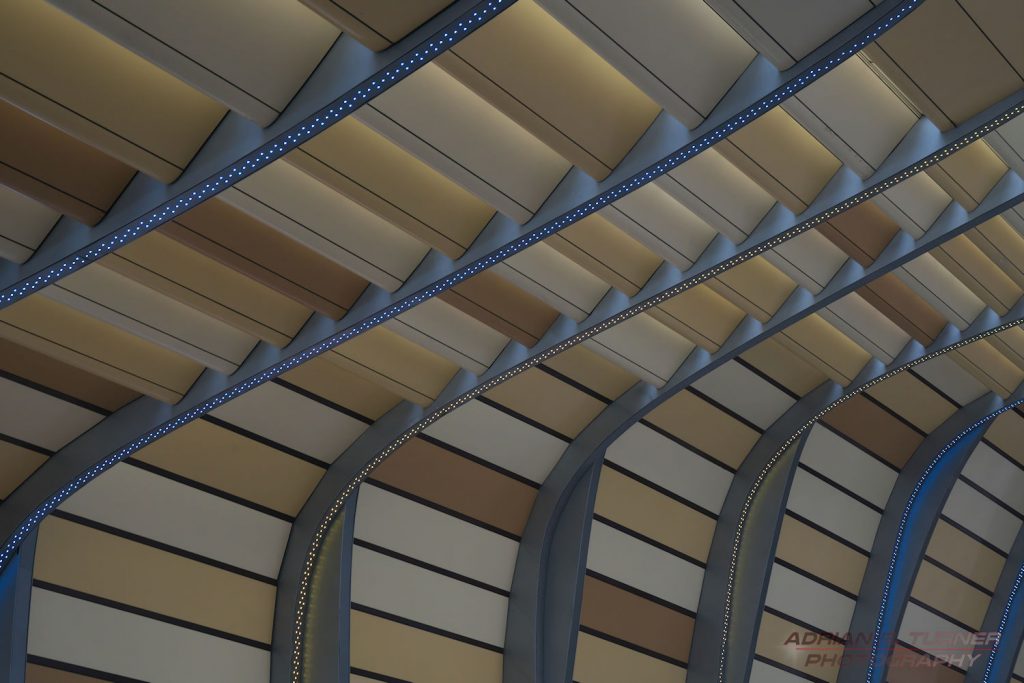 Another gentle treatment to reveal the subtlety of light and colour.

During the rest of my time in Singapore the weather continued to be changeable, so I continued to photograph abstract architecture. When the skies are grey, photographing in black and white helps to give a more stark, graphic look to some compositions, and hides a grey sky as a clean white background to show off the subject. Underexposing a little, maybe by 1ev, can reveal texture in cloudy skies, whilst lifting mid-tones and shadows in camera or post production using dynamic range expansion or high dynamic range techniques can recover dark foreground details. 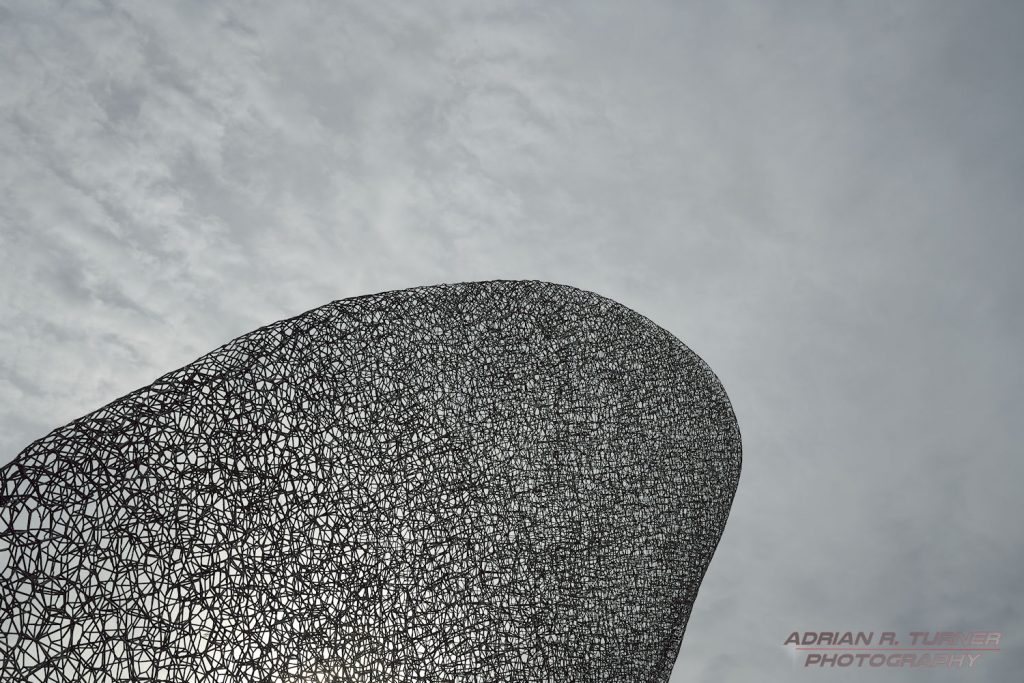 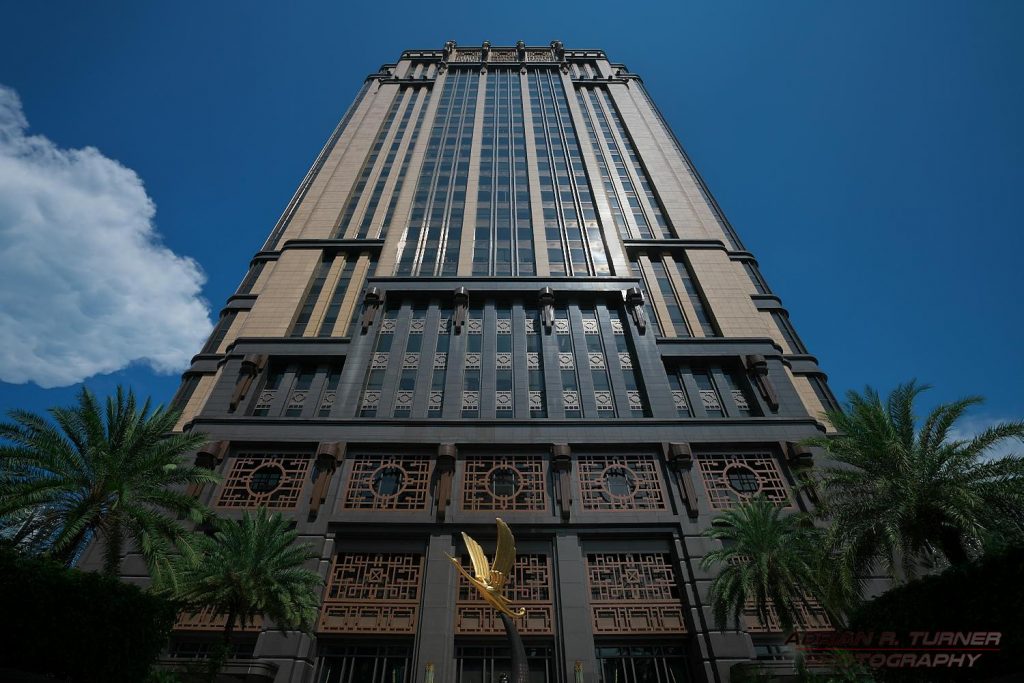 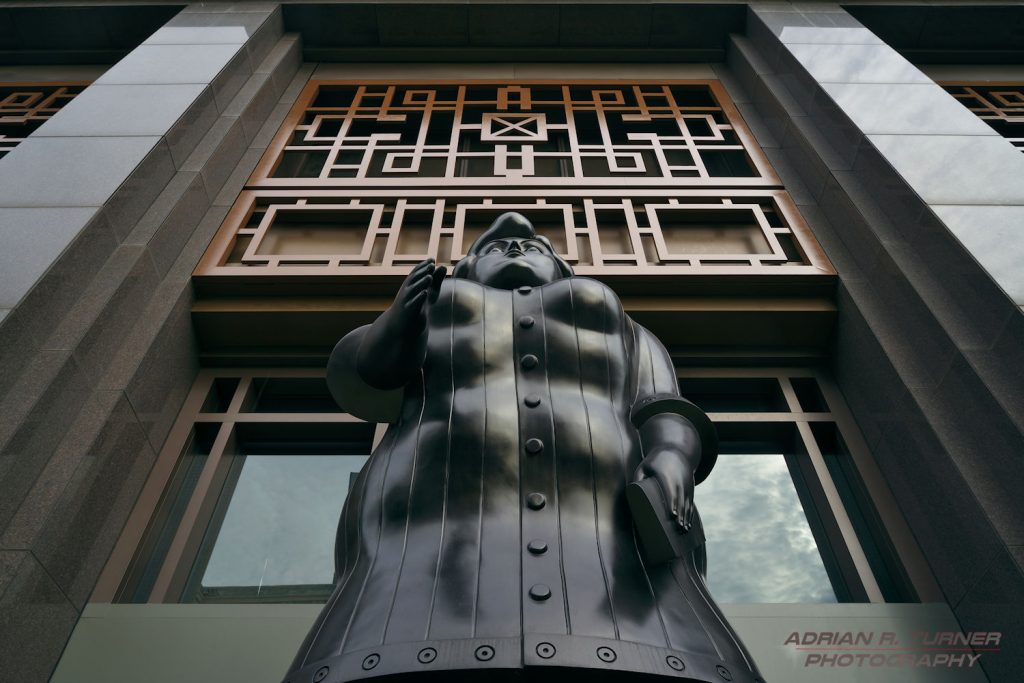 Detail of sculpture on the Parkview building. 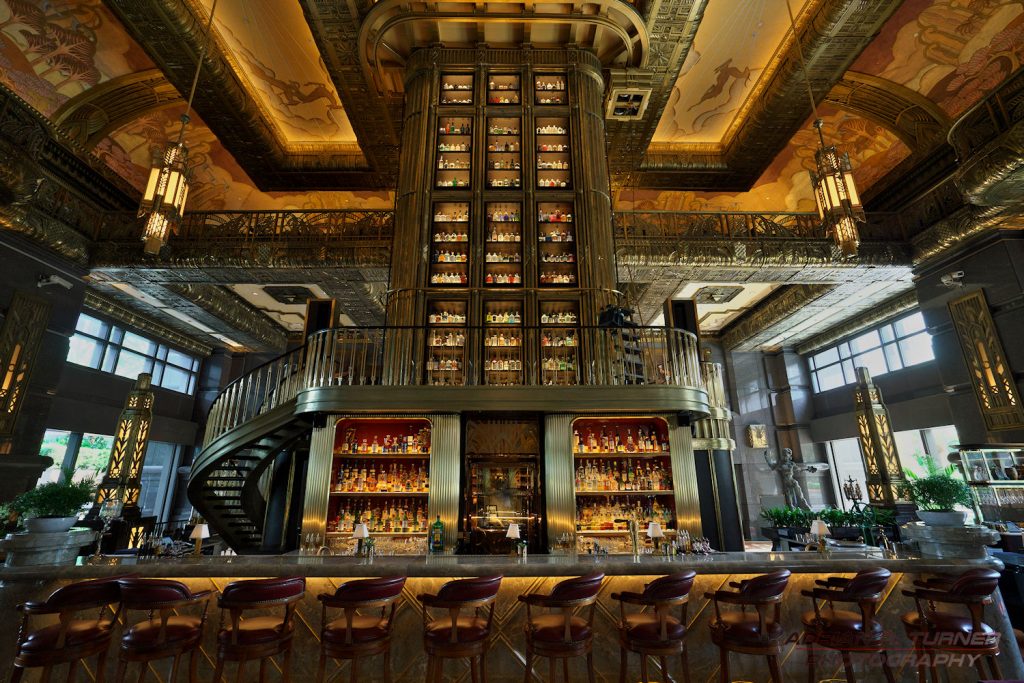 Recently renovated art deco bar in the foyer of the Parkview building. 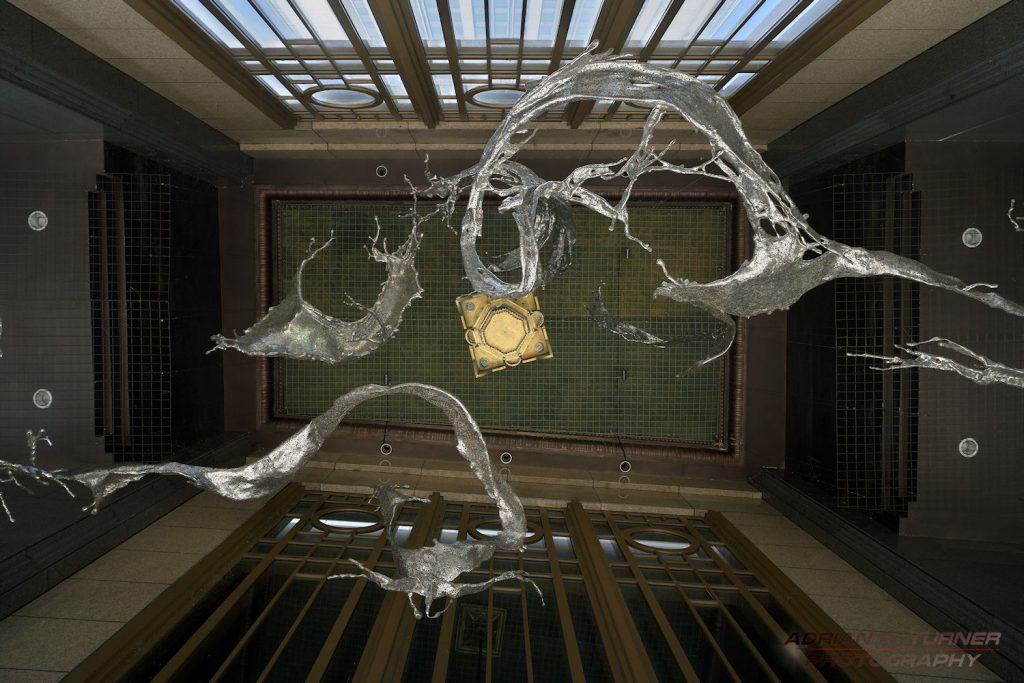 Most cities in Asia are unencumbered by the same planning laws found in western Europe, and as a result their buildings are often daring and adventurous, since “landmark” buildings command higher prices for apartments and office space. Just behind the “Parkview” building, a particularly striking art deco skyscraper clad in a combination of bronze and brown marble, Singapore has a new pair of condominiums whose surface looks like honeycomb. Both curved towers are asymmetric and fascinated me with projections from their upper flanks that made them look like a three-dimensional jigsaw puzzle. The shock and awe of their appearance up close also triggered another period of Zen-like photographic fascination and experimentation. An ultra wide-angle lens is a useful tool, not just because it is possible to “cram it all in” (the frame), but also to create drama or confusion with the unique viewpoint and perspective that such lenses create. A black and white treatment doesn’t always work with a scene that is already quite monochrome, and I found some photographs originally taken in black and white were more flattered by a colour treatment. In some cases both colour versions and black and white versions with a colour filter treatment work, but give a very different effect and atmosphere to the same picture, and neither is “better”, merely different. 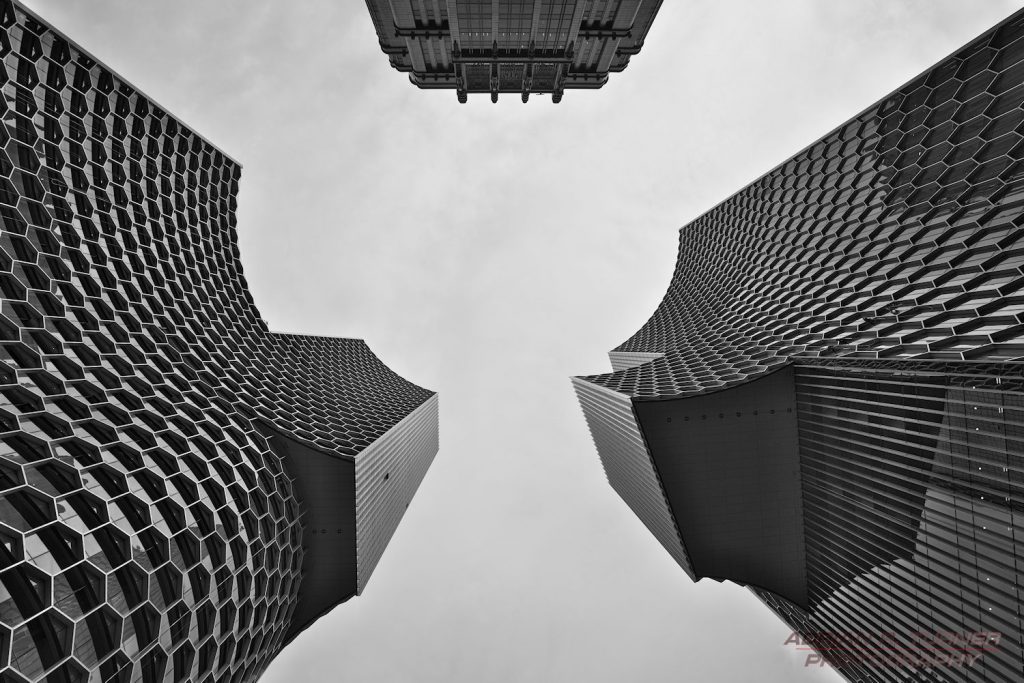 An ultra wide angle lens and looking up creates a dramatic point of view.

Another photo of the same sequence, processed to reveal the subtle colour and tone of the glass and steel. 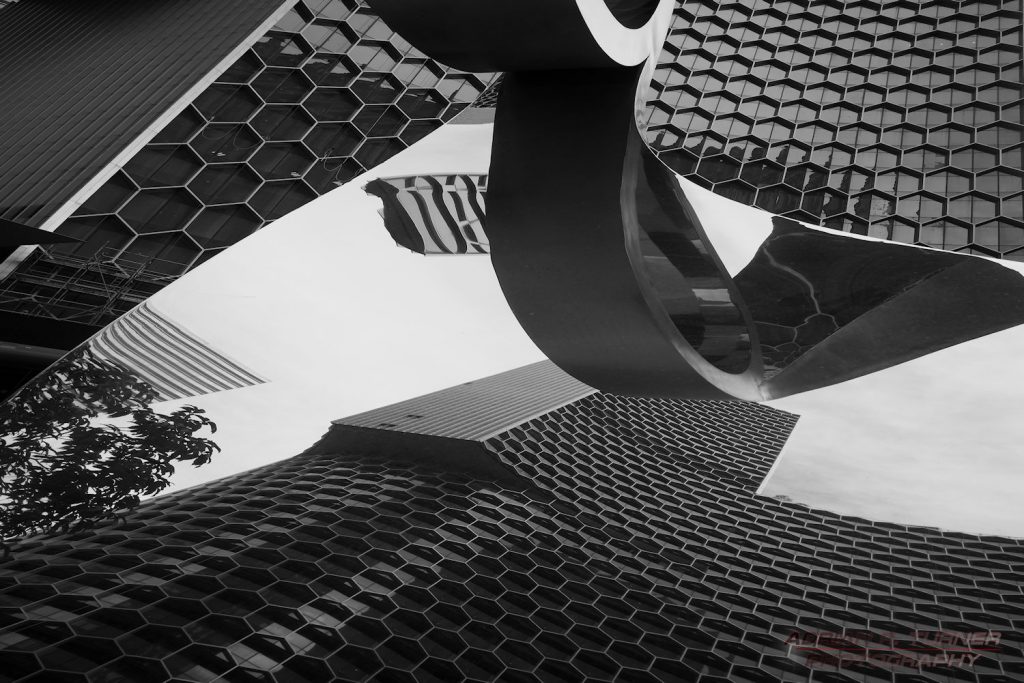 A wide angle of view and reflections in a stainless steel sculpture create an impossible composition. 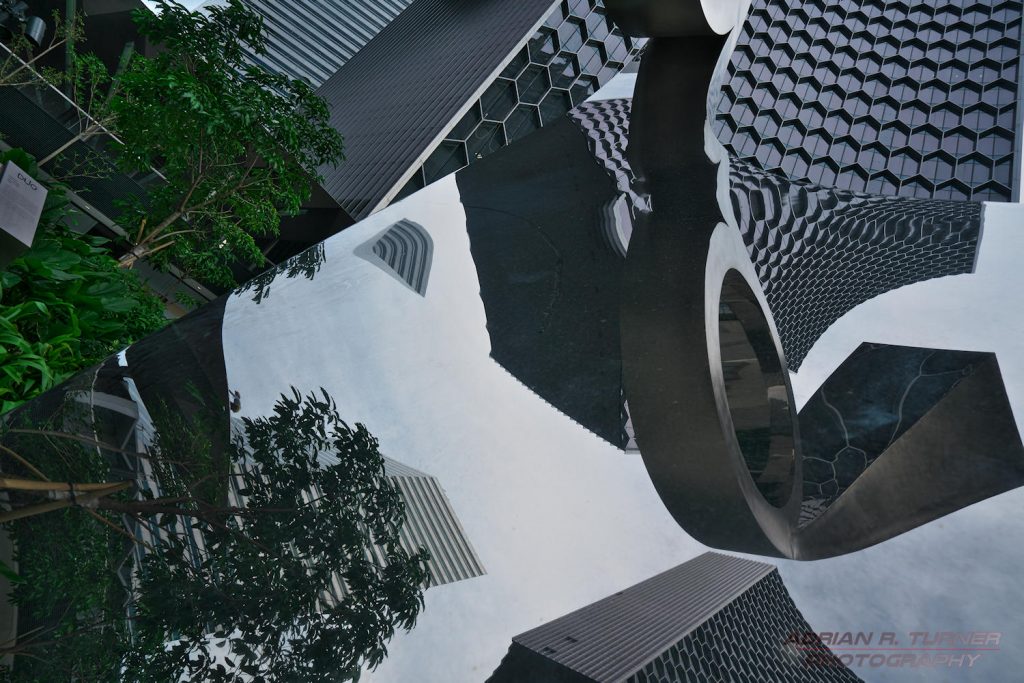 An alternative photo of the same subject, processed in colour to reveal a warmer look.

I continued to photograph occasional abstract architectural images, as when I concentrate on particular subjects or types of photograph, I find it becomes easier to find and “see” suitable subjects and compositions. As my visit to Singapore came to an end, I had still only photographed the bayside area once, but I had been encouraged to visit Singapore’s “Fountain of Wealth”, said to be the largest fountain in the world, and photographed the roof line of a new office, hotel and restaurant complex opposite the Raffle’s hotel. 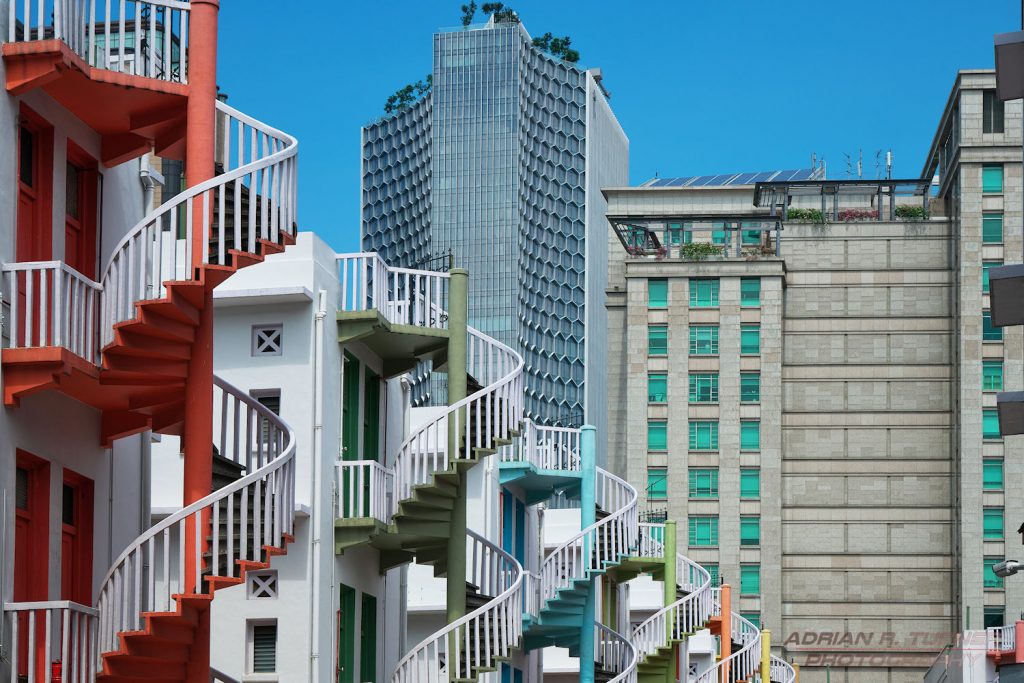 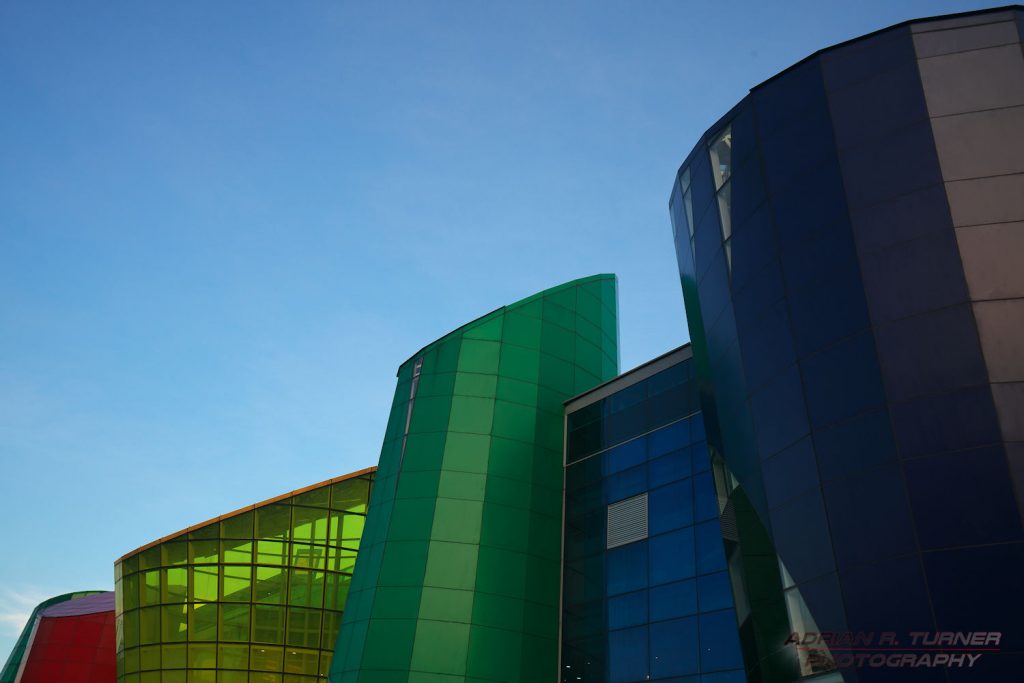 Roofline of an unknown shopping mall near a competition venue, processed to reveal the rich colours of each section of the roof.

An abstract of the roof of the Esplanade concert hall in the late afternoon light. 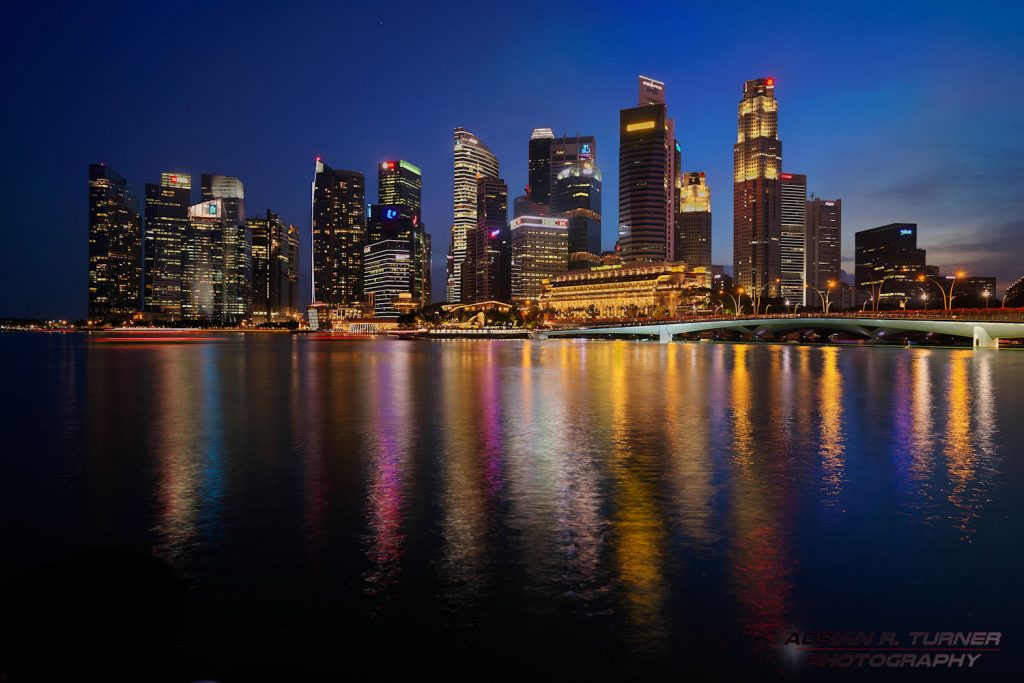 A clichéd scene of Singapore’s bayside skyline, post processed “to taste” to reveal the colours captured by the camera in ways the eye rarely sees. 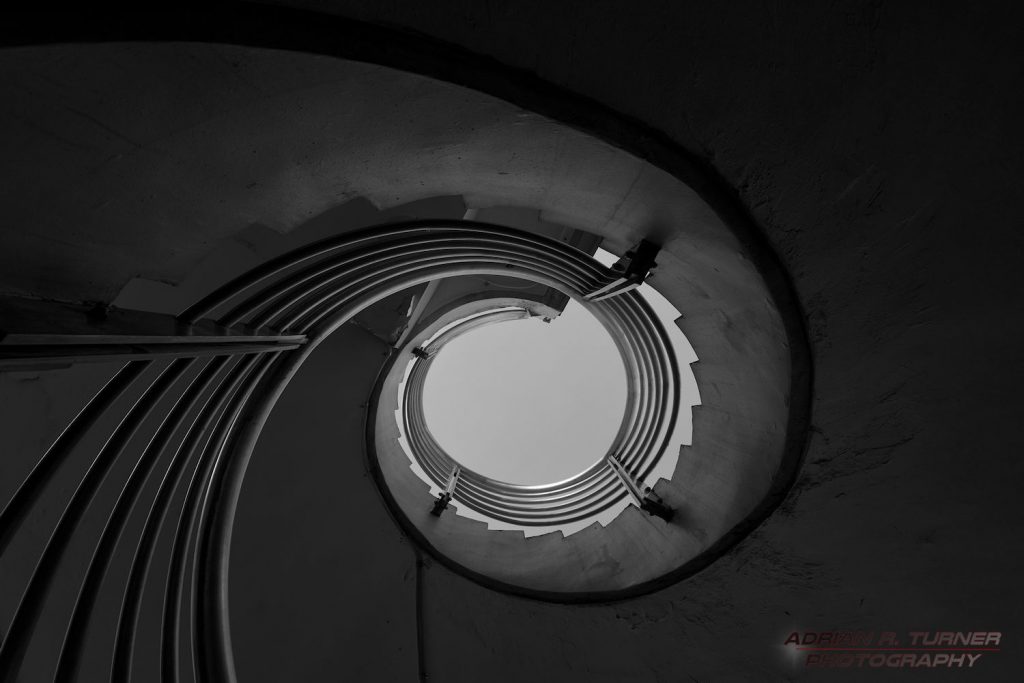 Spiral staircase to access the Fountain of Wealth, situated in the middle of a traffic island. 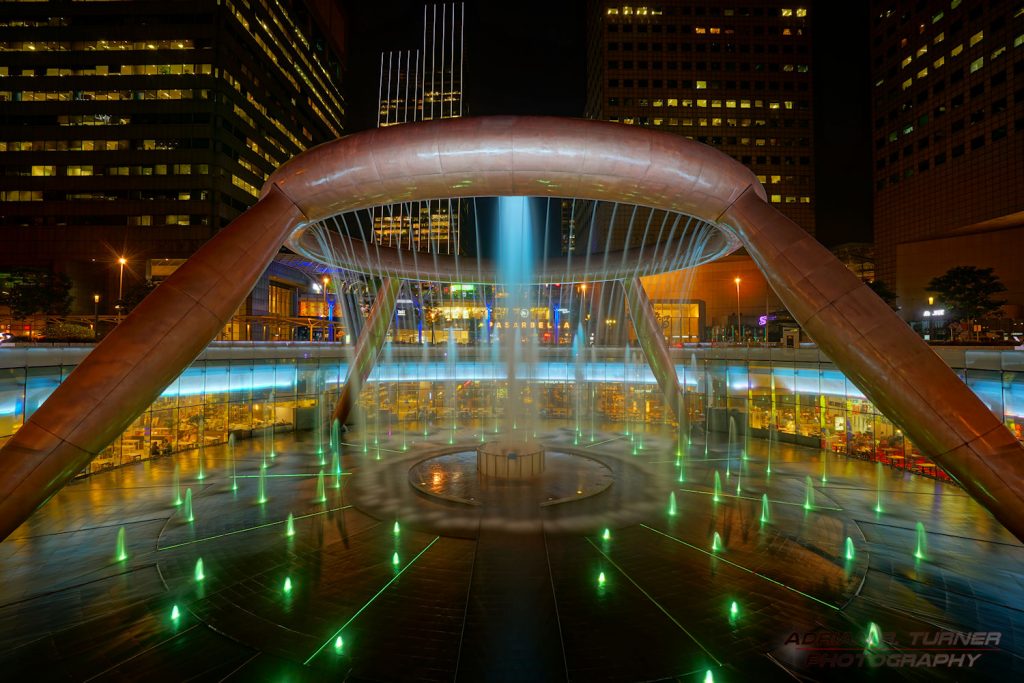 Fountain of Wealth. A sensor with wide dynamic range allows night-time exposures with extreme contrast to be captured, with a dodge and burn or HDR treatment to reveal both highlight and shadow detail. Long exposures on a tripod tend to exaggerate colours in a way that the eye can never see. 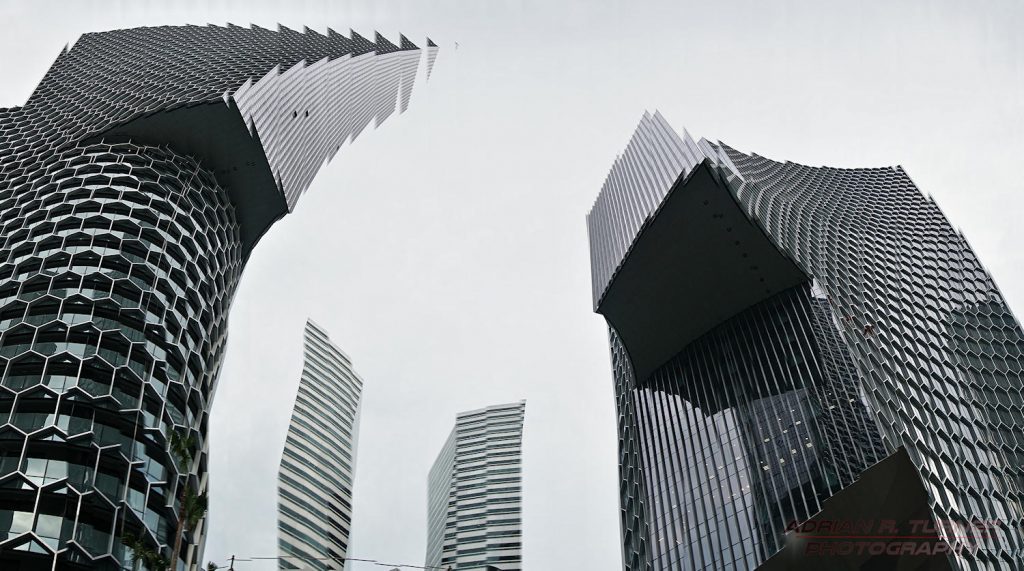 Sony cameras feature a “sweep panorama” feature, where the camera takes many exposures as you sweep the camera, stitching the result in camera into a panoramic jpeg. With careful but deliberate misuse, it is possible to create “digital” effects without software.

I don’t regard myself as an architectural photographer, and make no claims about the artistic merit of my photographs. However, I did discover a certain satisfaction from spending time exploring some of these unfamiliar subjects, and it helped me to realise that the “process” of photography is often as enjoyable as looking at the result, because it becomes more than merely a means to an end. It didn’t cure my photographic dry spell, but it did give me confidence that my interest is still there when it is stimulated appropriately. I would encourage anyone to try to find a way to see new things in new ways when they are struggling with inspiration, as it may prove to be an opportunity to grow artistically.

I close this item with a photograph of a building to commemorate the Singapore volunteers corp., who lost their lives in campaigns in Malasya and in POW camps:

“They fought not in enmity against men but against powers of darkness enslaving souls of men.”

A moody black and white treatment for this old building, now surrounded by a new hotel and office complex, brought out the drama of the point of view and the start contrast between the two architectural styles.

The photographs in this article were taken with a Sony E mount cameras and lenses, and post processed to taste using Ichikawa Software’s “SilkyPix Pro v8” or Sony’s own “Image Data Converter”.