#598. To create you best photographs, you must exhaust your subject

When you think it’s over, there’s usually a lot more to find.

The secret to great photographs is the same as the secret to any great achievement. In Albert Einstein’s words, 1% inspiration 99% perspiration.

The difference between the low impact snap and the striking gallery image is just that. When you thing you’ve got the shot, push harder. Think differently, get out of your comfort zone and into a creative flow. Forget about Facebook likes and any other social metric. Focus only on what works for YOU. With 7 billion talking bipeds on the globe, chances are that if something speaks really deeply to you, it will to a few others. 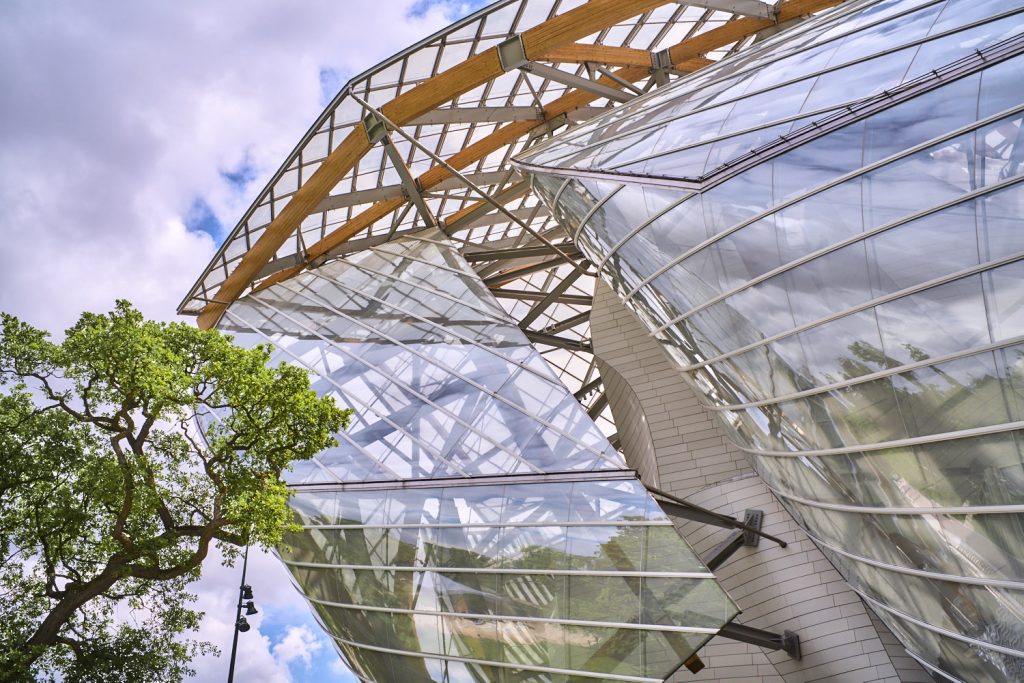 Deep is the important word here. Forgetting about speculation for one minute, deep emotional impact is what builds connection and gets the wallet out. In 2017, you can choose to impact a tiny number of people at a profound level or collect a zillion meaningless likes that are forgotten seconds after. One will nurture you more than the other.

About 60 meters and less than an hour separate these two (above & below) photographs of the Louis Vuitton foundation in Paris.

My guess is almost everyone reading this will like the image above. And forget about it in less than 10 minutes. The one below ? Most will either discard it, or think I’m just being silly for the sake of attention, or think “hmm, interesting”.

Others will feel deeply about a mega corporation bullying art students into submission to protect their brand and will read more into the meaning of the shallow reflection, the hiding face shape and the upside down composition. A tiny minority will be willing to pay significant money for a limited edition of 30″ piezzo prints. 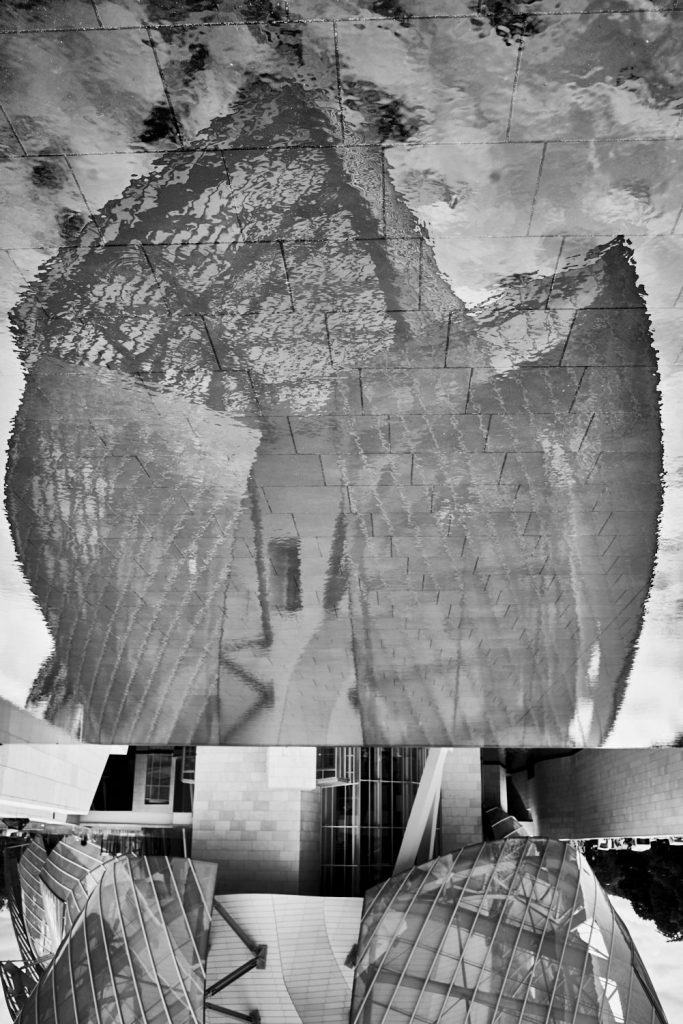 Even at a non-activist level, you might be more interested in that second photograph’s composition and processing than the first.

If you want to create something meaningful, you must exhaust your subject. Photograph it from different angles, using different focal lengths and let something, many things, that you hadn’t planned for, dawn on you.

Look hard before you shoot. Look for people. Look for composition. Look for meaning. Look for the unusual. 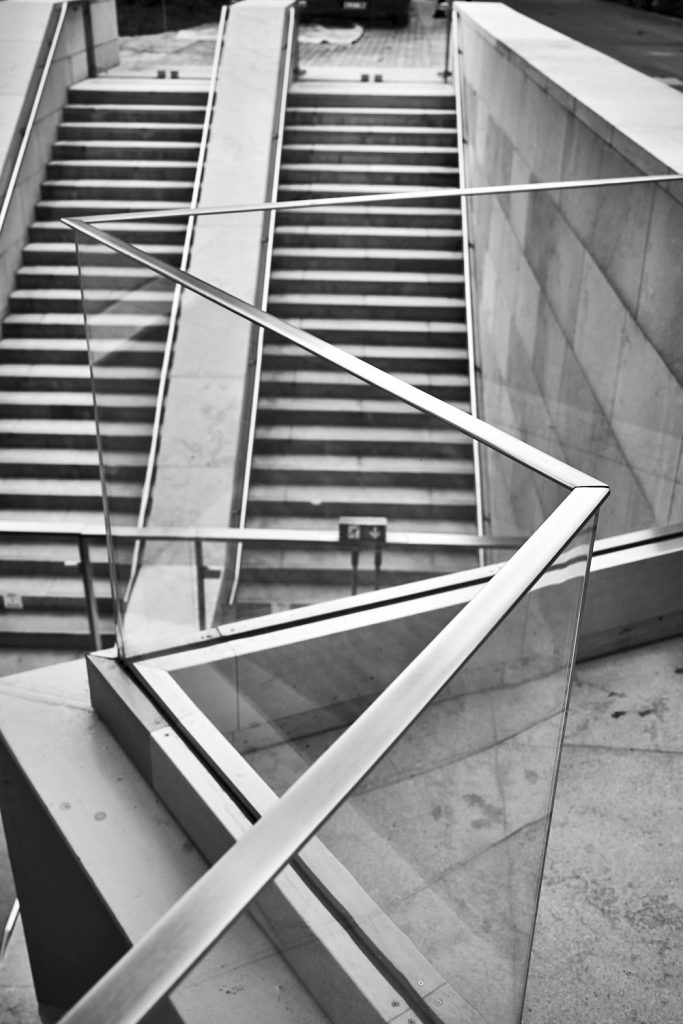 You’ll like some stuff, you’ll dislike the rest. That’s good. The only mistake is bland. 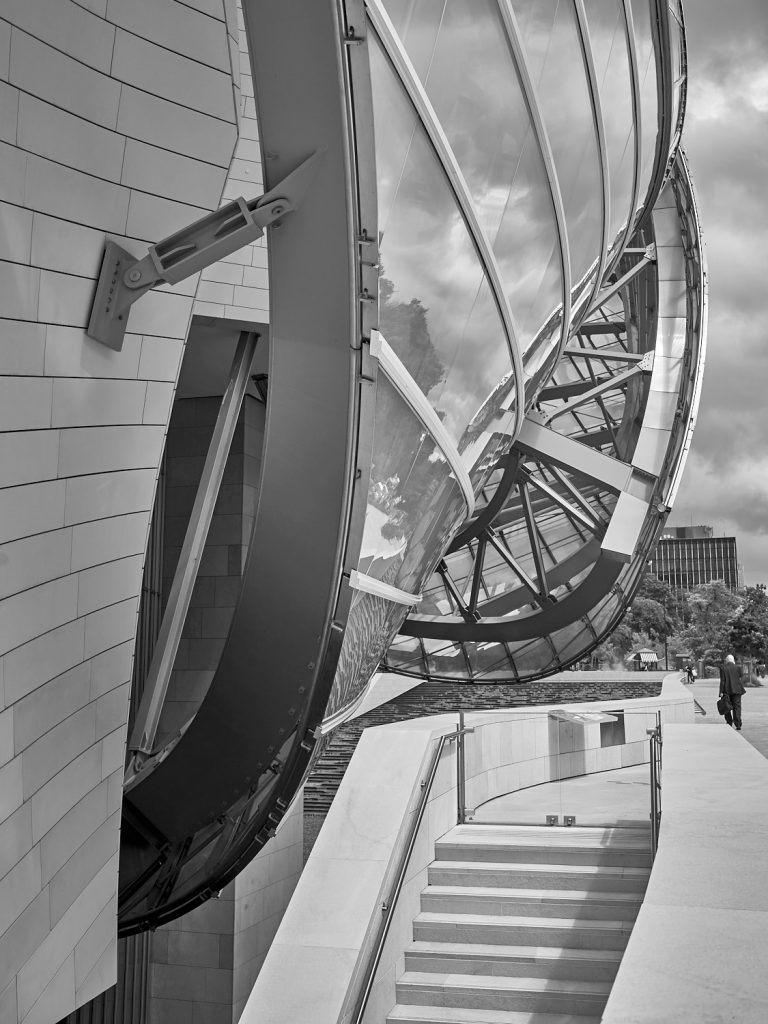 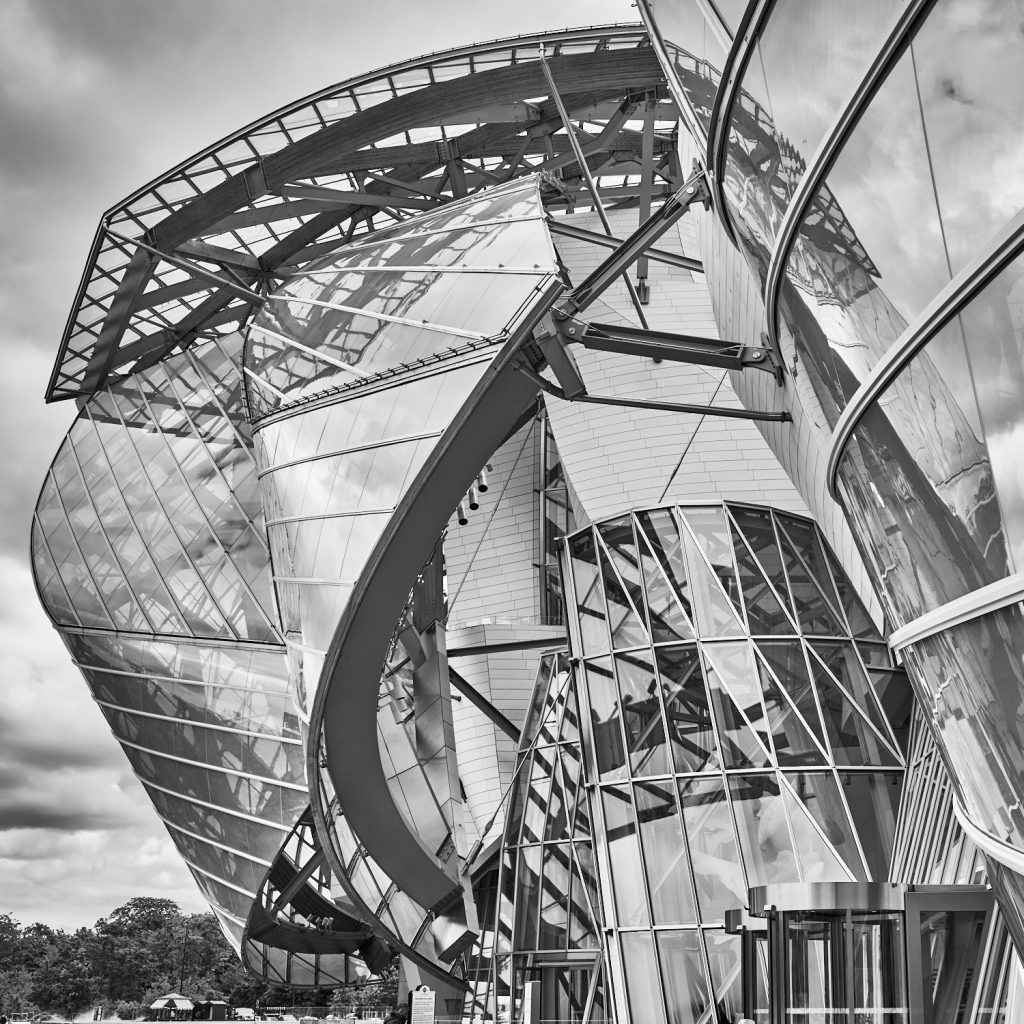 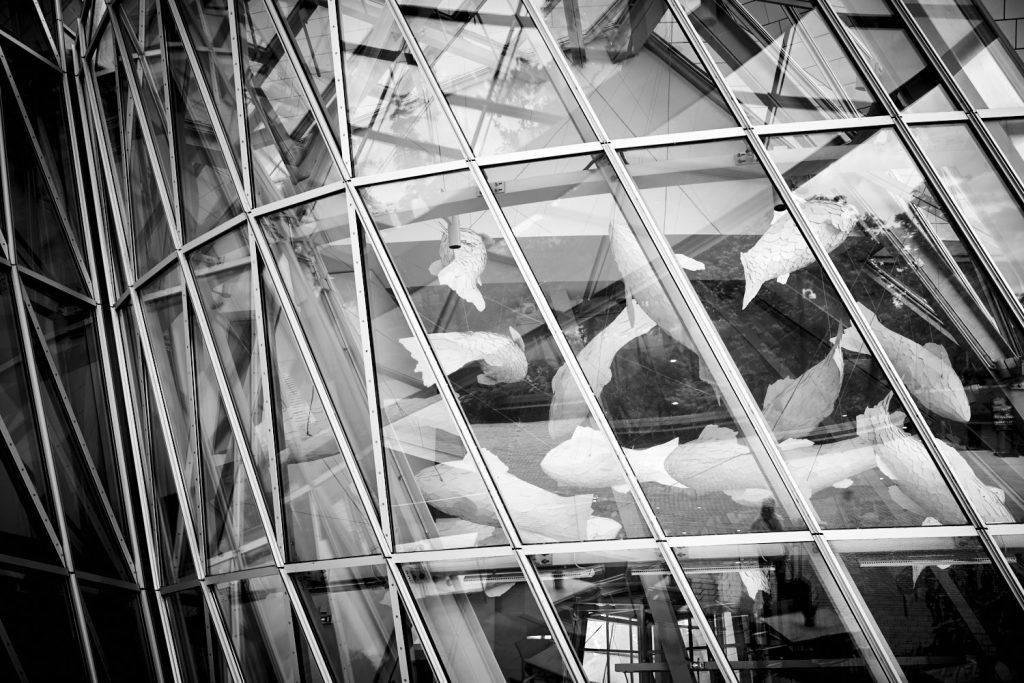 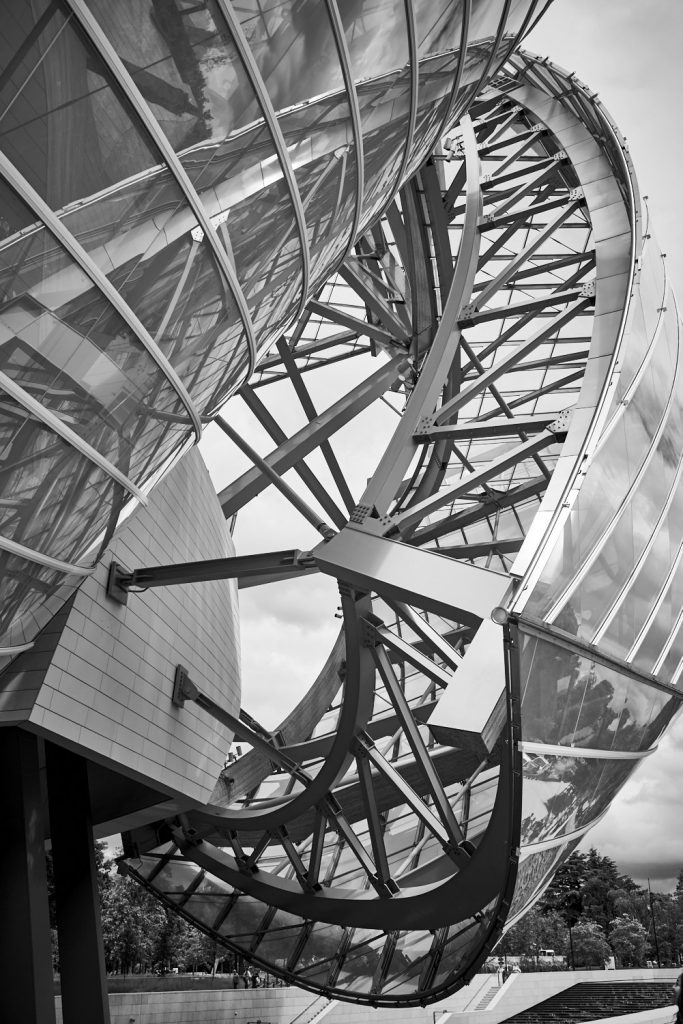 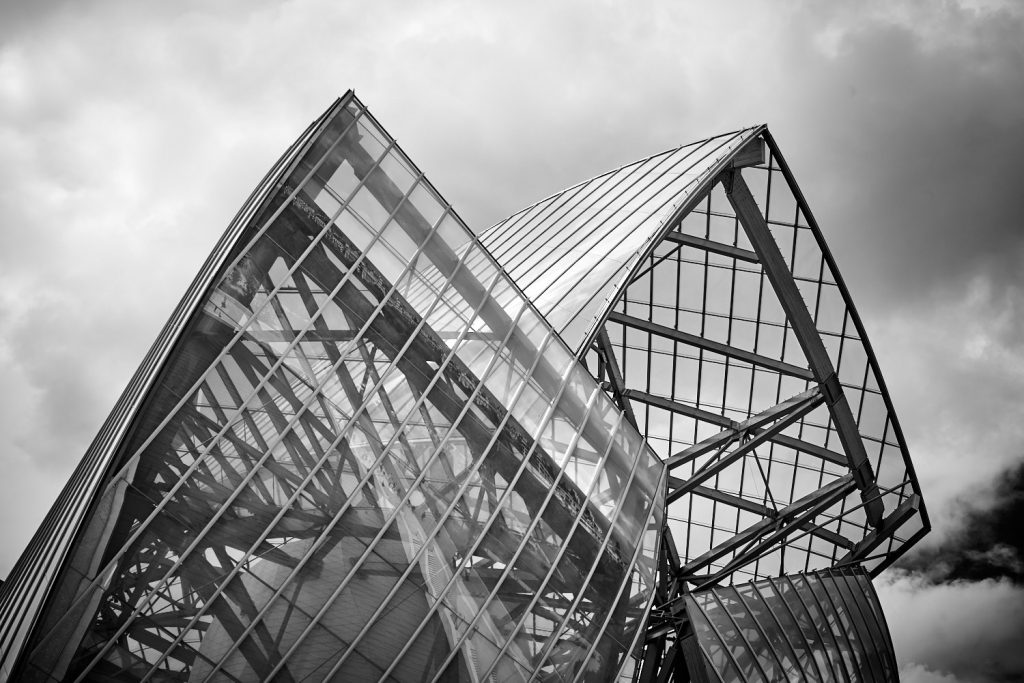 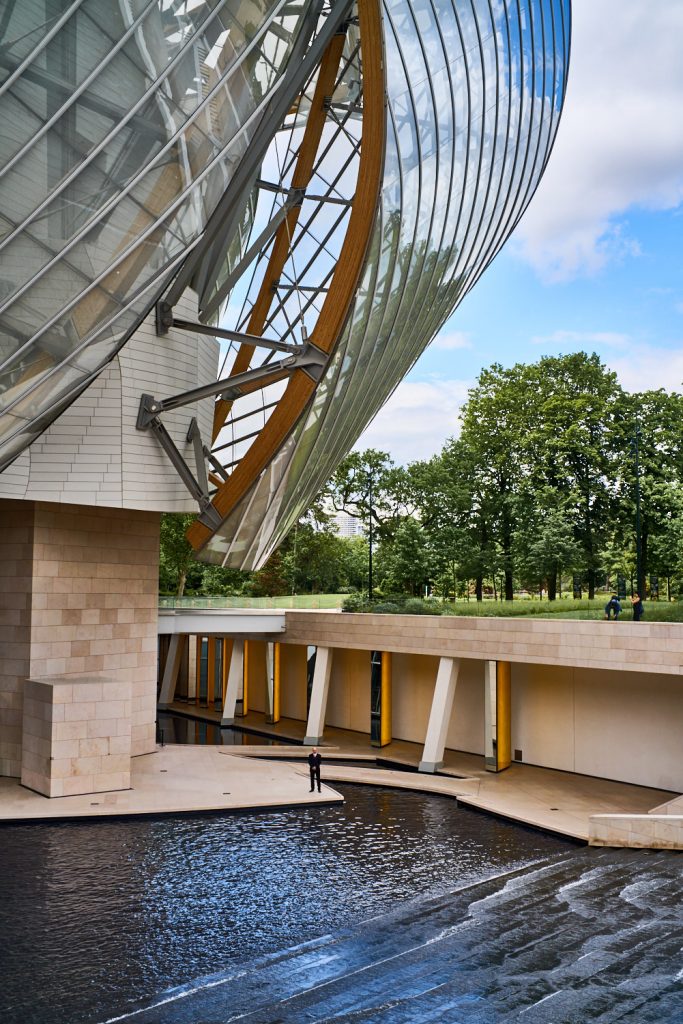 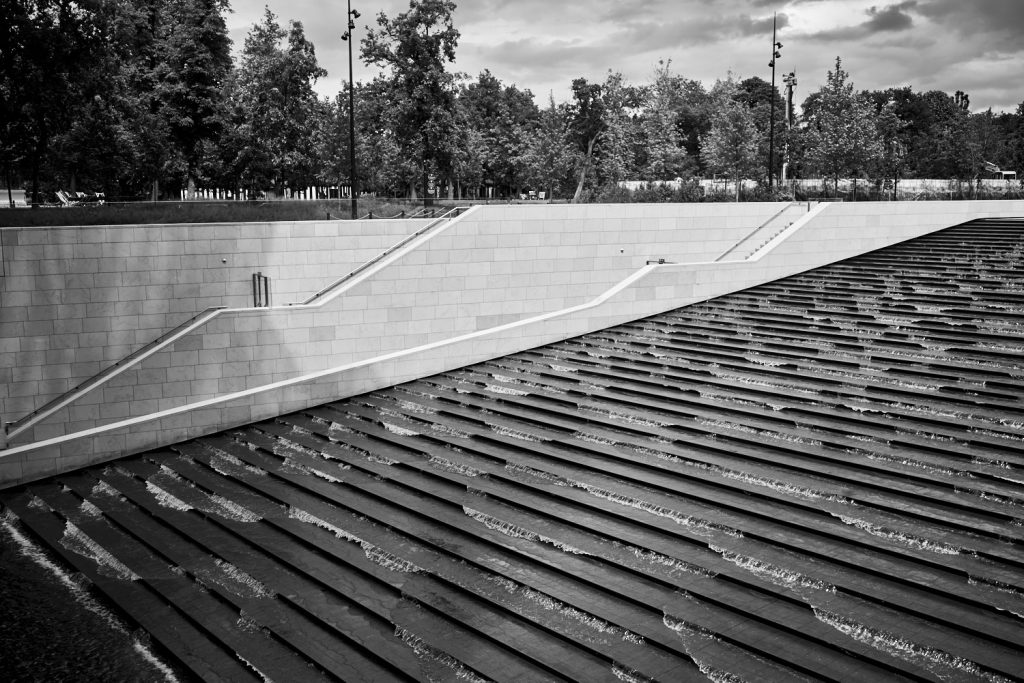 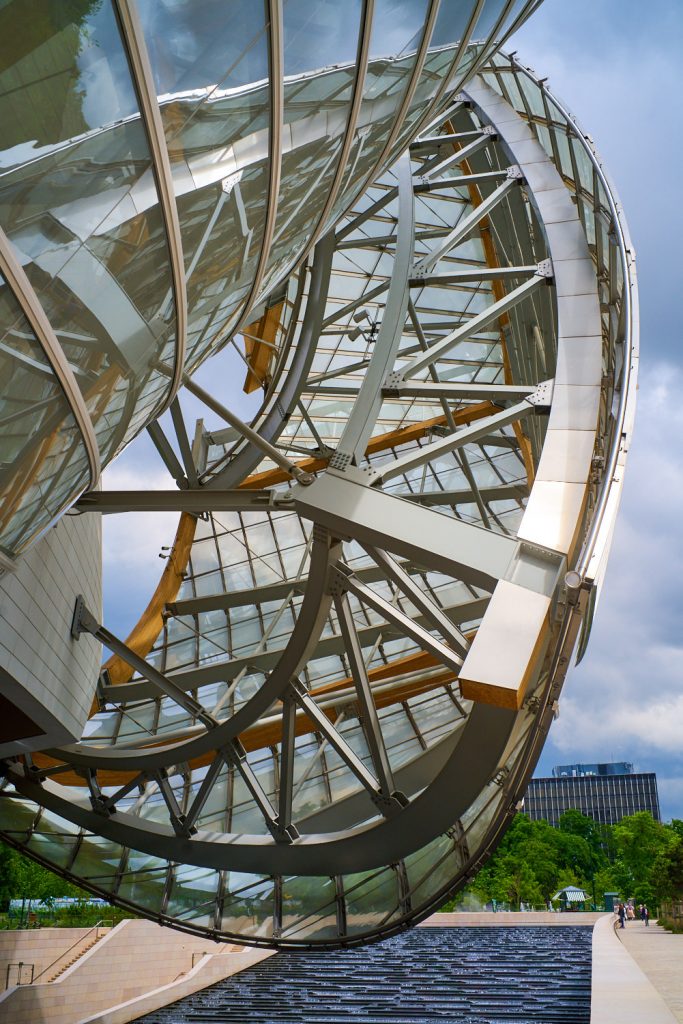 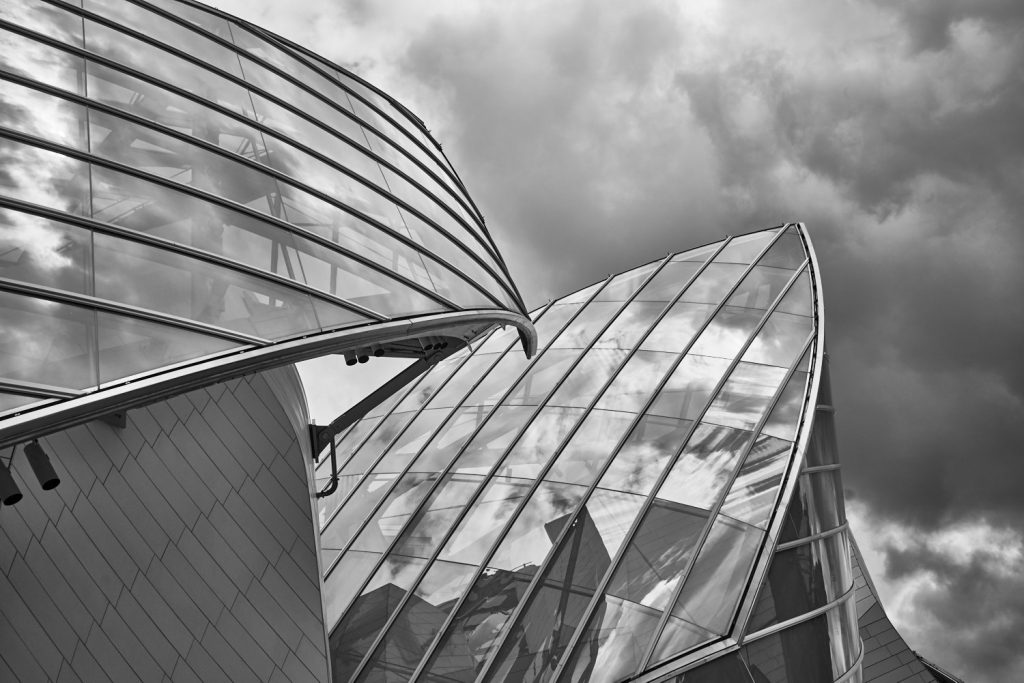 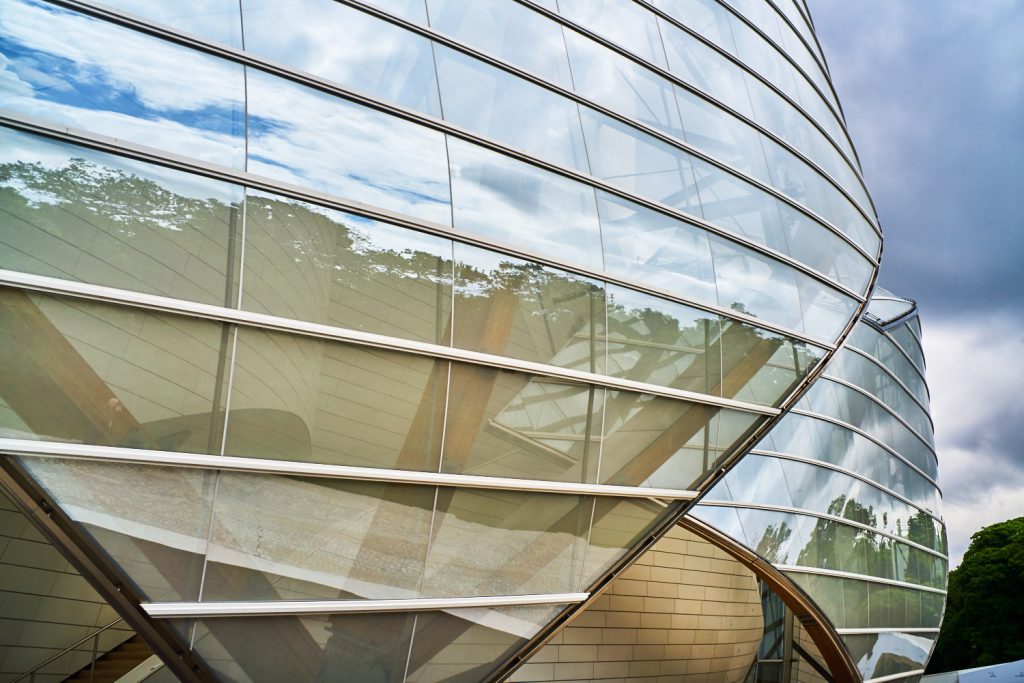 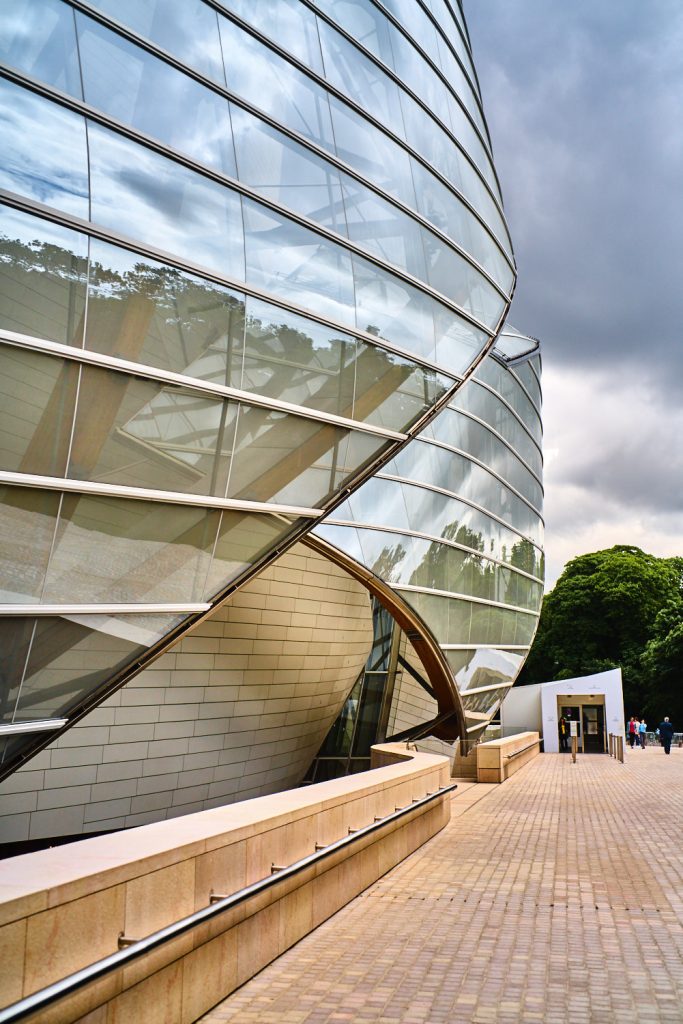 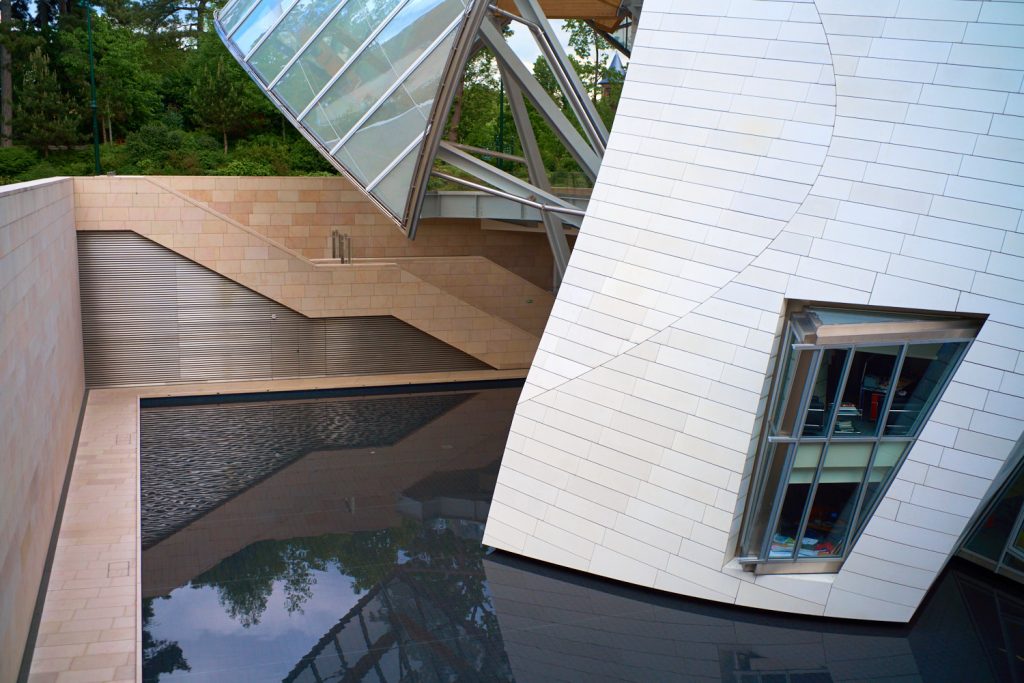 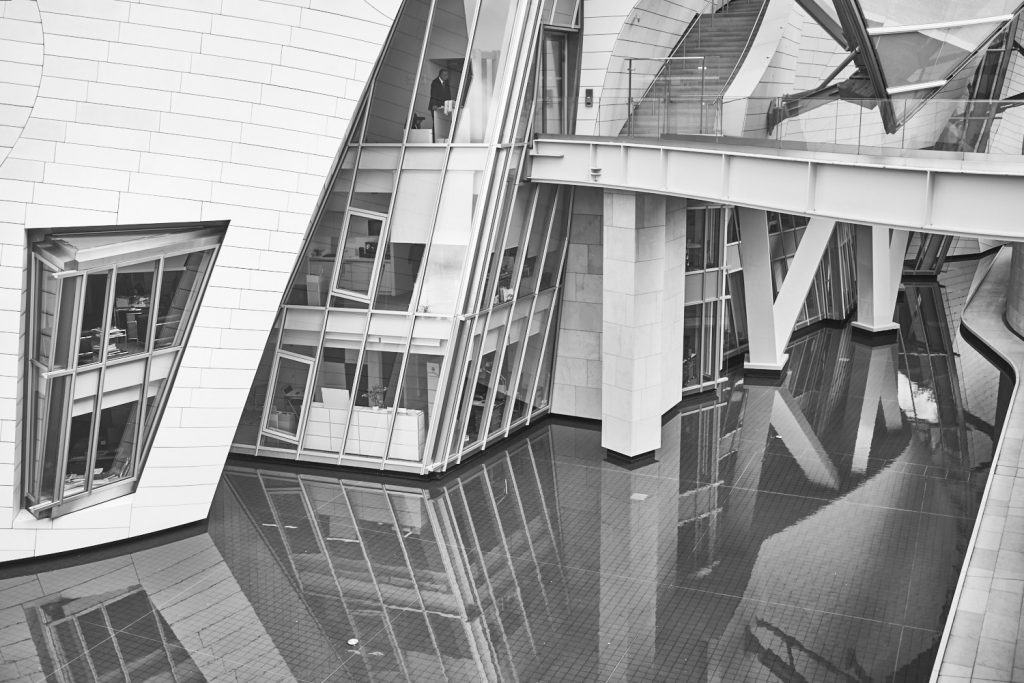 Those are just a selection of photographs from this interesting building. Not really pretty as a whole but fascinating in pieces. I’m sure there’s a lot more to see there and that someone spending time there with a different personal vision would produce an entirely different set.

As destinations go, Paris is a bit of an obvious choice for many. But the Luis-Vuitton foundation borders on the un-destination concept we’ve grown to love here at DearSusan. As has the adjacent “Jardin d’acclimatation” which I’ll describe in a future post. Both come highly recommended.

But that’s a topic for another day. For now, let’s focus on working a subject for as long as you can bare it. In a feature-rich environment, it’s tempting to move from one subject to another as soon as a good shot has been secured. Particularly on a vacation or time-limited trip. However, in order to create more spectacular photographs, it’s often best to stick to just one and wring the last drop of creative juice out of it. It’s once you are past that zapping mode and deep in an receptive state of mind that you do your best work, often intiutively and without realizing. A new meaning for the Zone System, possibly ?