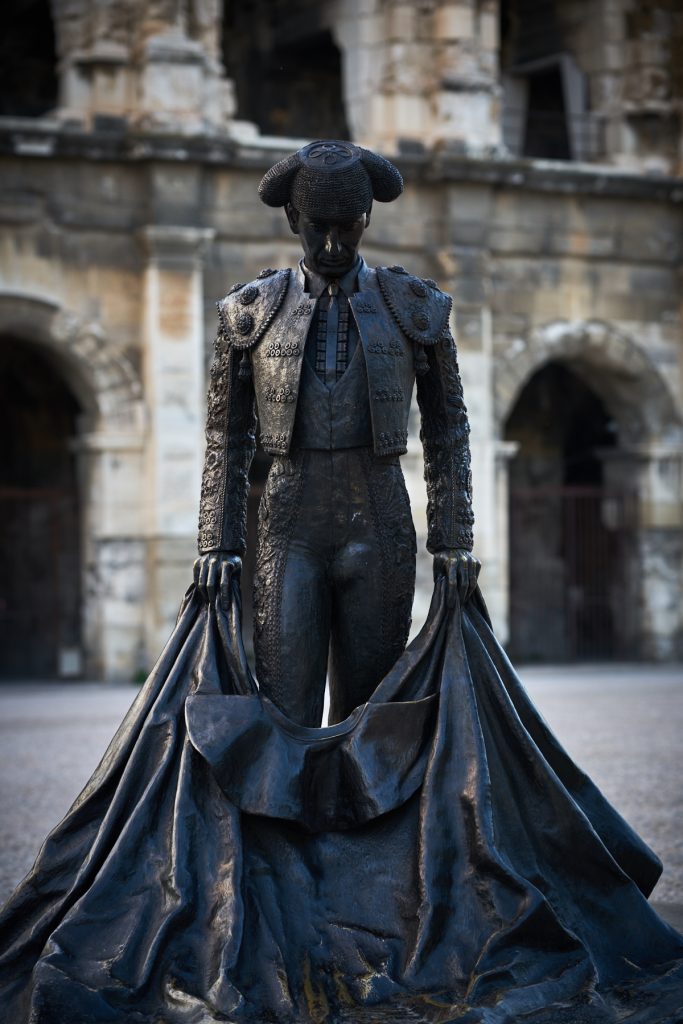 What makes DearSusan unique for me are the deeply conceptual insights, the unfathomable comparisons, the soulful interrogations about the whither of our passions…

Well, I thought, it is time for lighter fare. In this case, a quick in-and-out in Nîmes, in the Southern region of Languedoc. Nîmes is a city with a rich past and an interesting present. And, unlike Paris, for example, where tall buildings have been with only 3 exceptions relegated far from the city skyline, mostly in La Défense, in Nîmes there is a deliberate effort to integrate the old and the new, to imagine some sort of architectural dialogue building bridges over centuries and millenia. Lighter fare, I tell you. 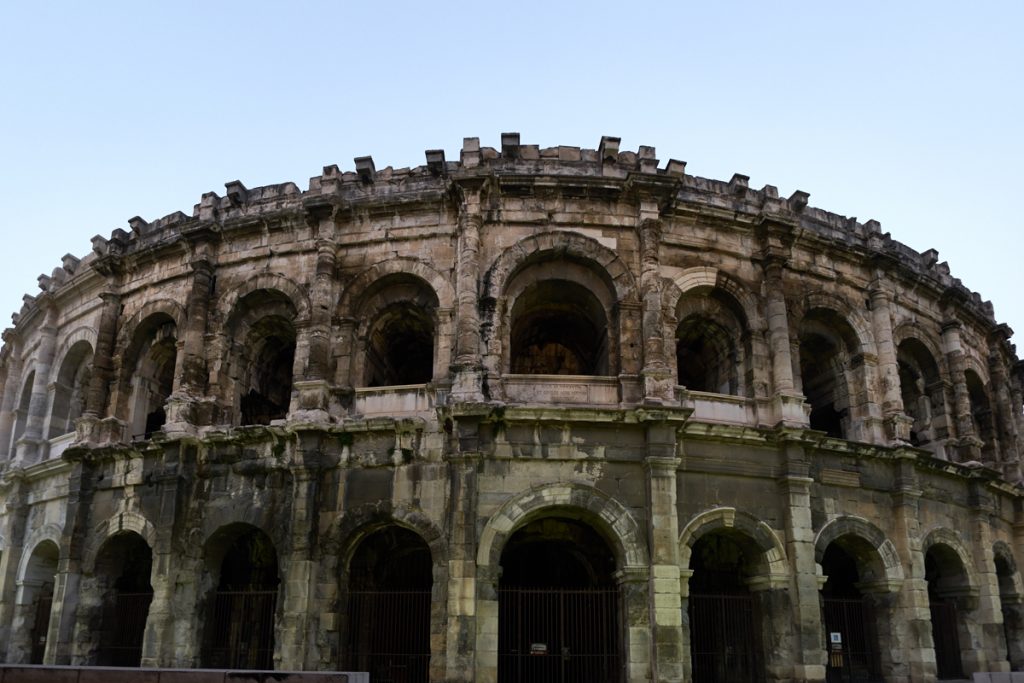 ambitious. And, in my humble opinion, qui successful indeed.

Interesting case in point: the Musée de la Romanité (museum of Roman civilisation), see above, designed by starchitect Elisabeth de Potzamparc. Instead of picking a historic building, it will be housed in a spanking new one, just opposite the Arènes, Nîmes’ most spectacular and famous construction and attraction. Not only is it new, but it is strikingly, unashamedly so. Old grouches, among whom I am often counted, would be quick to object that this “pollutes the site”. Except that here, it seems to work well. Bien joué! (Well done!) 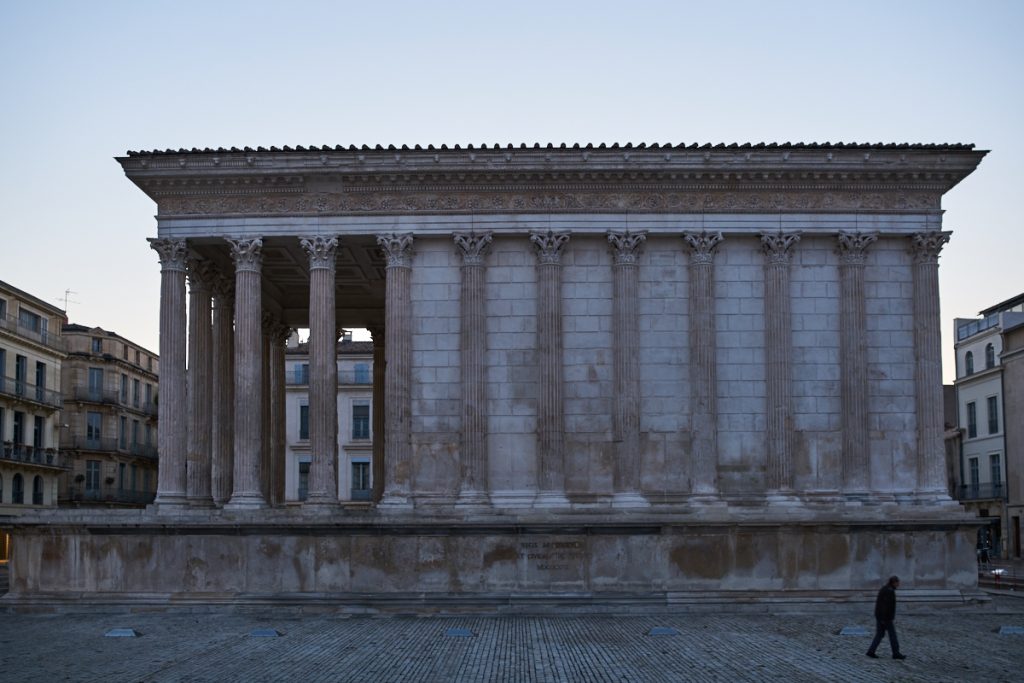 Other example: the Maison Carrée, see above, arguably the world’s best preserved Roman temple, and Nîmes second iconic location. Opposite it the city decided to build a spanking new public library, and designed by (Lord) Norman Foster, no less. Again, instead of “leaving perfection alone” and keeping the site as un-distracting as possible, the way conservationists would have it, the opposite approach. Brilliant, if you ask me. 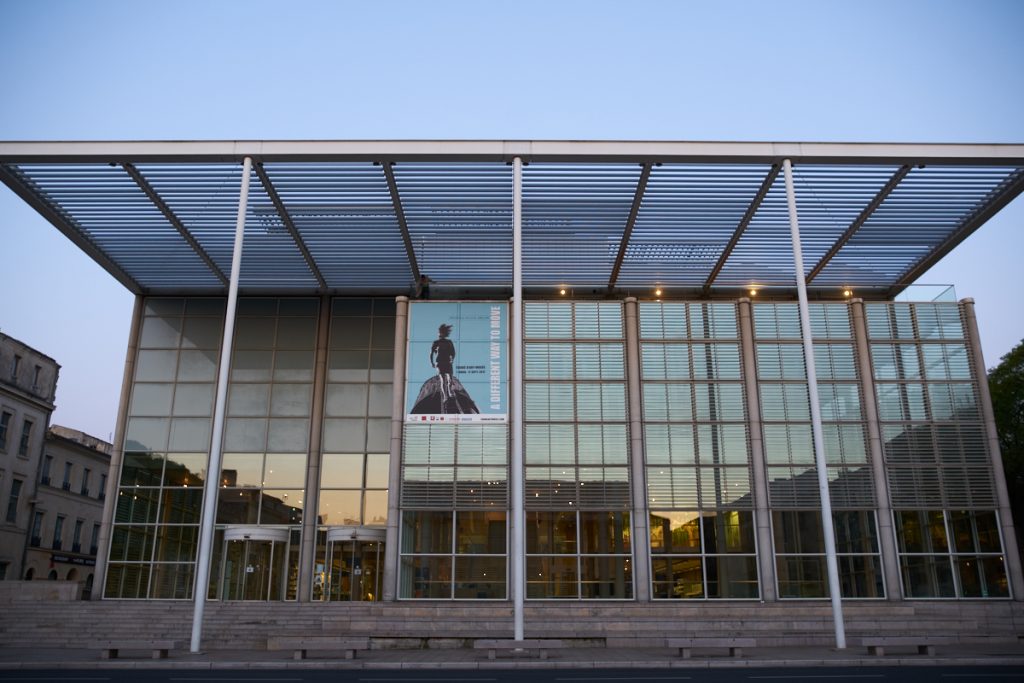 There is more to Nîmes, much more. Leisurely canals, the wonderful Jardins de la Fontaine (Fountain gardens). And also, for those who like kitsch, just as daring examples of Soviet-style architecture and decoration, testifying to Nîmes’ communist times in the 50s and 60s. 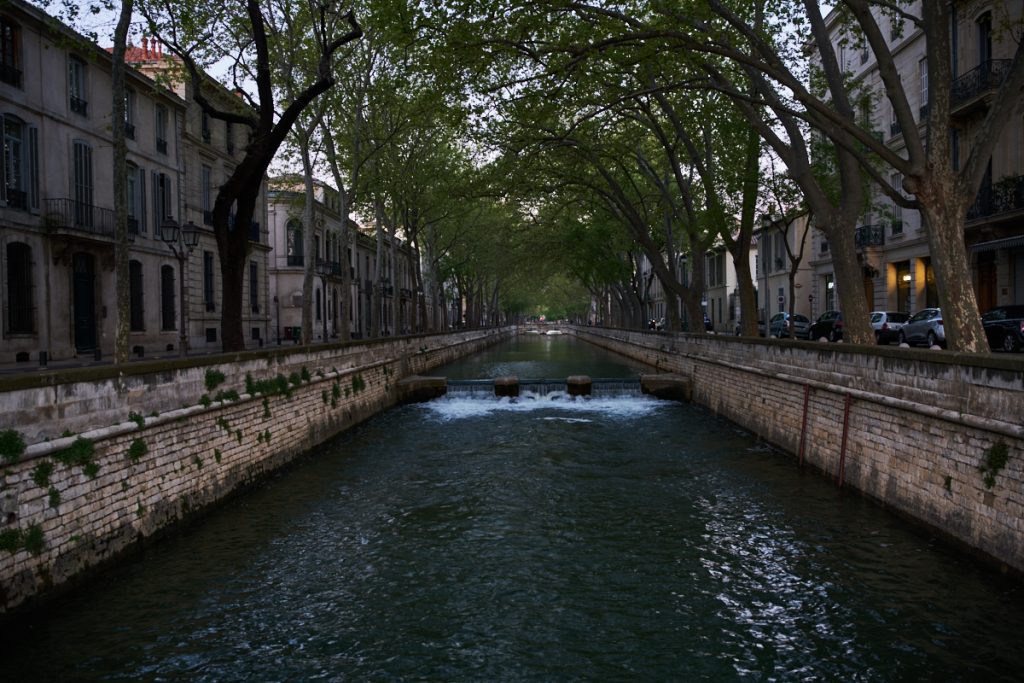 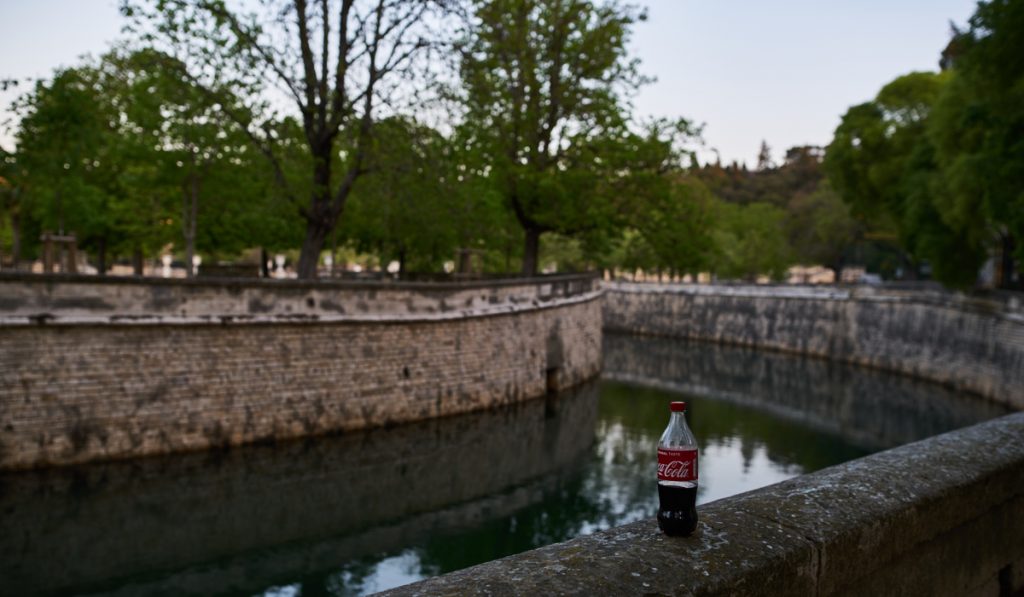 Actually, I only spent one evening and one early morning in Nîmes. Sort of a cross between destination photography, when you travel just for that, and raw opportunism, when you shoot places where you’re going for other reasons. This shows the value of having one’s gear at hand at all times, tripod included (hint, hint!). 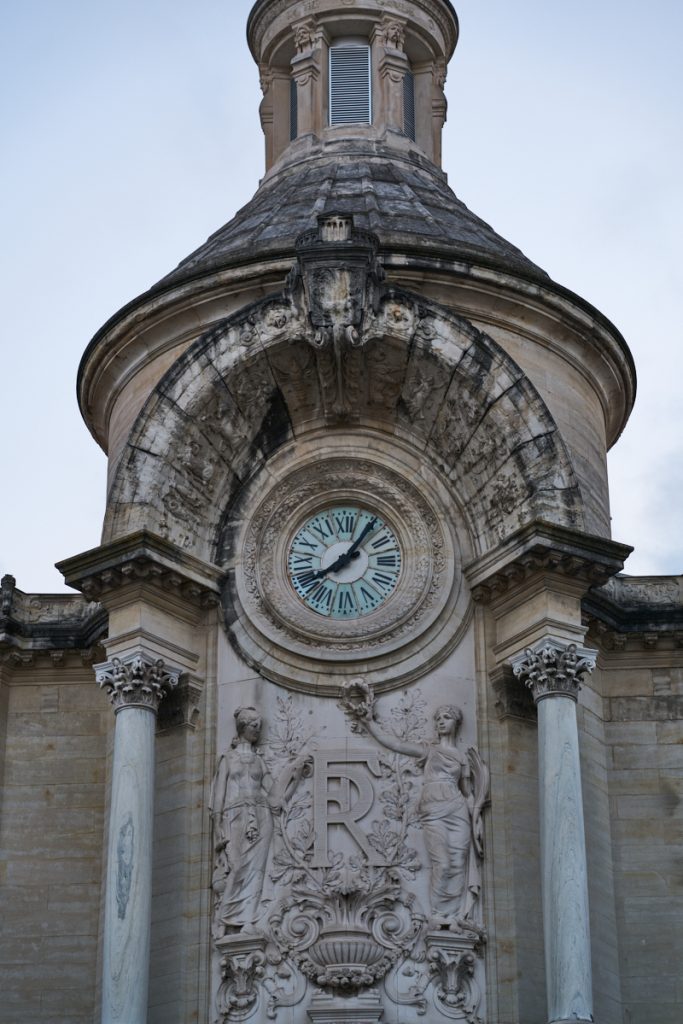 PS. Nîmes is also known all over the world for another reason, its canvas (in French, toile). Because the latter part of the “toile de Nîmes”, or “canvas from Nîmes” became “denim”. No Nîmes, no denim… 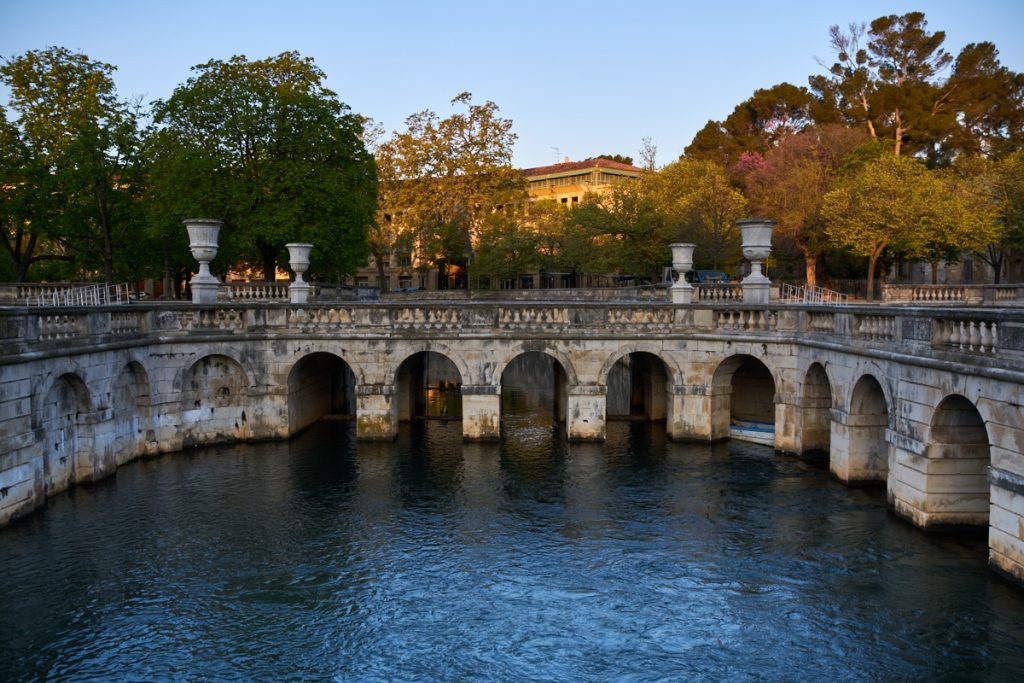