DearSusan posts tell a story. A story of photography and situations/things/people to photograph, to process, to share and to remember. Therefore this cannot be a post, it must go down as an un-post. Un-kind, un-inspiring, un-amusing, Un-Susan. The un-post.

Pascal can be such a drone sometimes (many times). He gets antsy when he sees brilliant landscape pics, and that gives him GAS. His dream? An Alpa camera with a 100Mp (for now) Phase back. Then he compares the end result to what we get out of our Sony A7RII, and moans. That the pics he admires are the best from some of the world’s best landscape ‘togs doesn’t stop him from moaning, on the contrary. That he rarely (very rarely, actually) goes out on his own for a dedicated shoot, and that most of his photo entreaties are caught on-the-fly as members of his family press on regardless, and he has to run to catch up, doesn’t count either. He moans, and moans, and moans some more. And I know for a fact that the Alpa, with all its qualities, requires just the sort of timeframe and effort that he doesn’t have available right now. So it would be a fool’s errand to buy one, it would just sit on the shelves while Pascal is out with his (by comparison) Micky Mouse Sony cum Zeiss ZM 35 f:1.4. So he is liable to go on moaning for quite some time. Ugh! This is the sort of picture we can get out of our gear. Not so bad, IMHO. 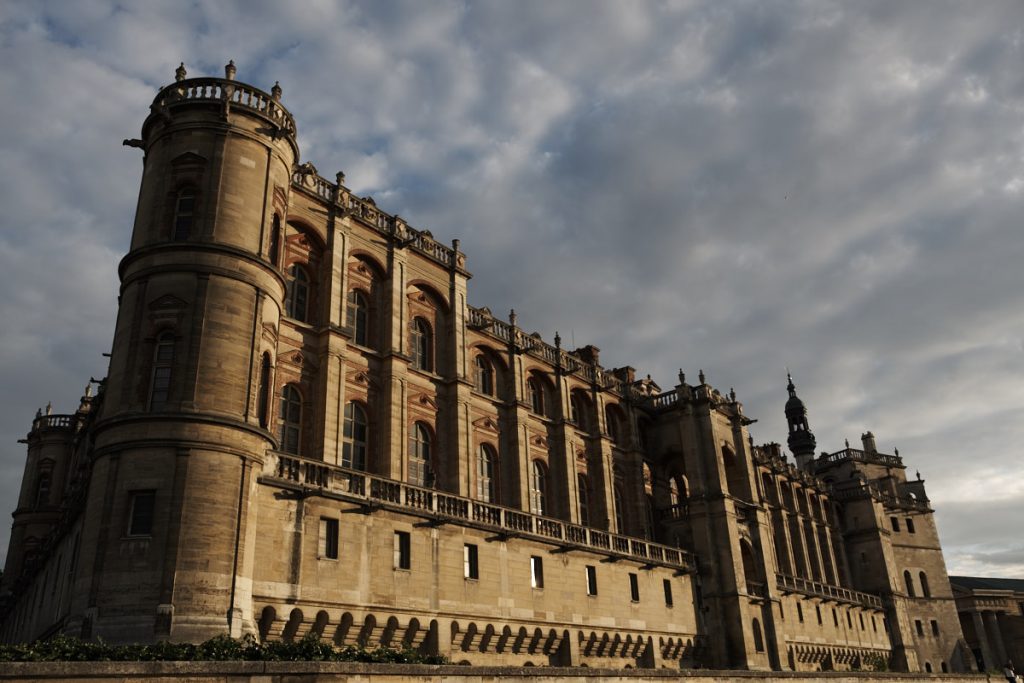 I try to tell him that the results we see out of the Alpa/Phase are wonderful not so much because of the exquisite equipment, but because a pro can (must?) afford all the time in the world to get the perfect shot out of every landscape. Wait hours if necessary. Come back multiple times to get that moment when the light/clouds/sun/sky/stars do the perfect dance. Not exactly what he can talk his family into. They are all karate black belts, and he not, so he is rather at a disadvantage.

I tell him to go out commando-style -meaning: alone- in the early morning, and he tells me that, while he doesn’t mind rising early, going out alone doesn’t set his creative juices in motion. No-win. More moaning.

Back to me. Saturday morning, I got up at 6:30, the crack of dawn, and it looked seriously promising. I felt like hell, but before a groan could pass my lips, I thought I couldn’t do a Pascal, and pressed on regardless. I thought I’d take care of e-mails and get back to bed, but then I’d have to live with the fact that I’d missed a nice dawn, and that I couldn’t do what I was preaching to others. No way out, I had to go out and shoot. I took my bag (always ready), my tripod (how better to convey to viewers my suffering and sacrifice in the name of photography than with a hideously long exposure, indicating I had used one?), an extra fleece, which I didn’t need, but which proved cumbersome, and forgot my wool cap, which would have been very comforting (I am bald as an eagle, my only resemblance to that mighty bird).

I could have gone to my best-location-close-to-home (see pic below), a 10 mn drive in between 2 5-minute walks, but that would already have compromised getting best light. It was already a bit late. Here is what it looks like on a misty morning. 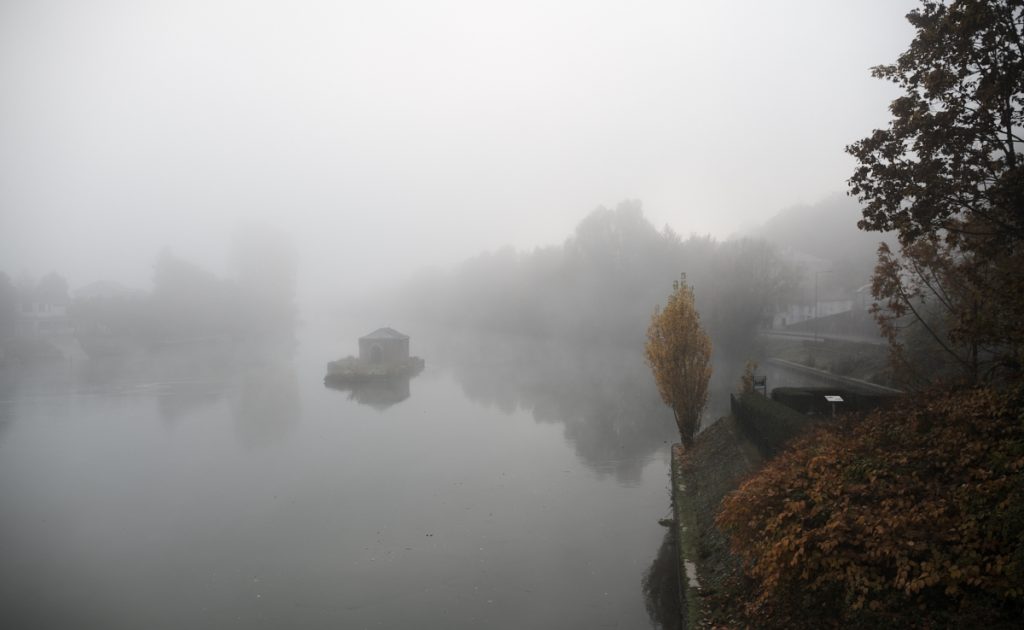 So I thought I’d explore and try to get something new, not such an easy task when you’ve lived the last 15 years+ in the same apartment. But, consciously or not, doing what I said Pascal wasn’t doing egged me on. Not the finest of motivations, I know, but, hell, this is an un-post after all.

This is what I saw. Not bad, dawn-wise, thanks to a set of lights that had stayed on by oversight. And, already, no need for a tripod, which joined the fleece as dead weight I’d have to carry…. 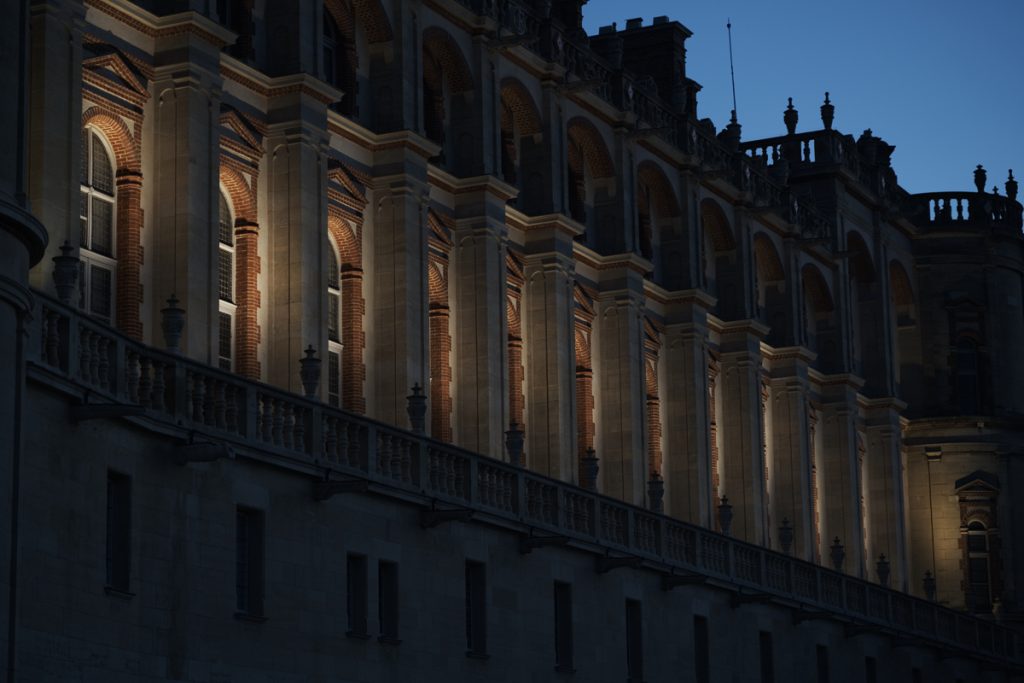 So I left my car behind, and started walking my way down to the river. 200+ steps, plus 500+ steps of steep incline. And thinking all the way down how much fun it will be on the way back up. What a genteel way to start a Saturday morning. Grrrrrr…

Next sight. Promising. Sadly, no excuse for turning back. Ugh! 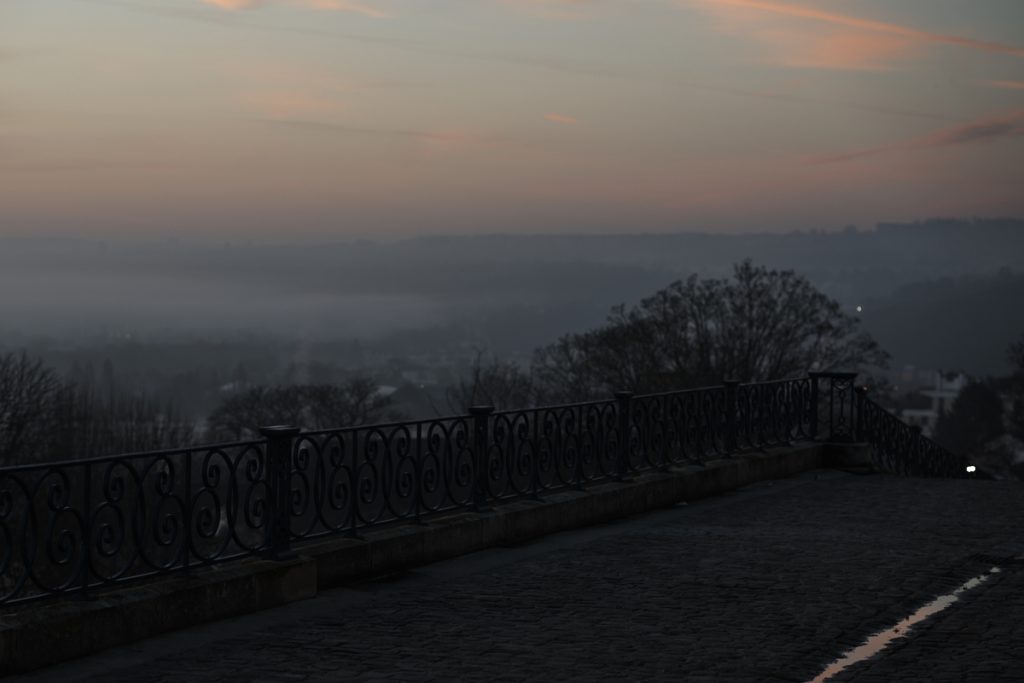 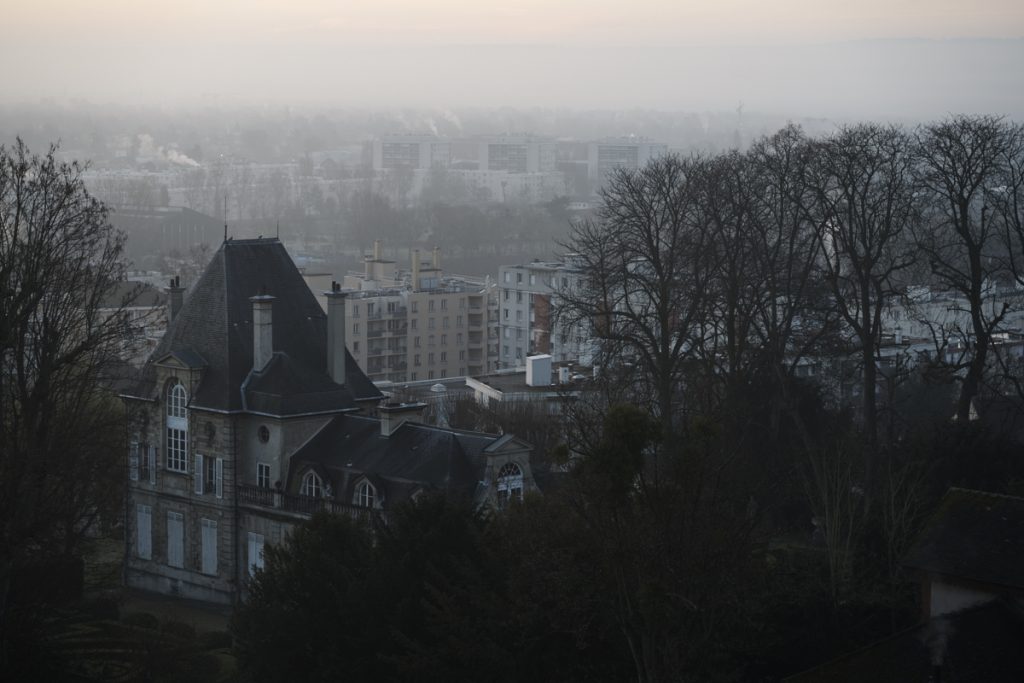 OK, I head down the incline and the steps. Why, oh why does my pride have to cost me so much?

First attempt at a new spot. Is it the lack of enthusiasm that transpires into the picture, or the mediocrity of the picture that kills any enthusiasm? 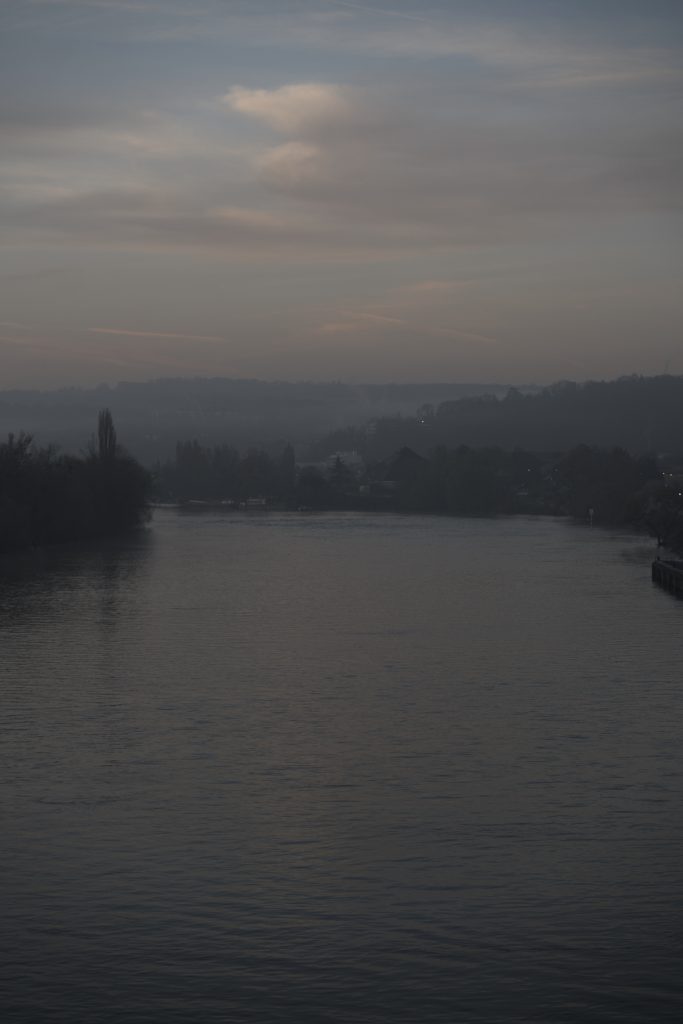 I am NEVER going to tell Pascal about this failed shooting. He wouldn’t let me live it down. Not in a million years. 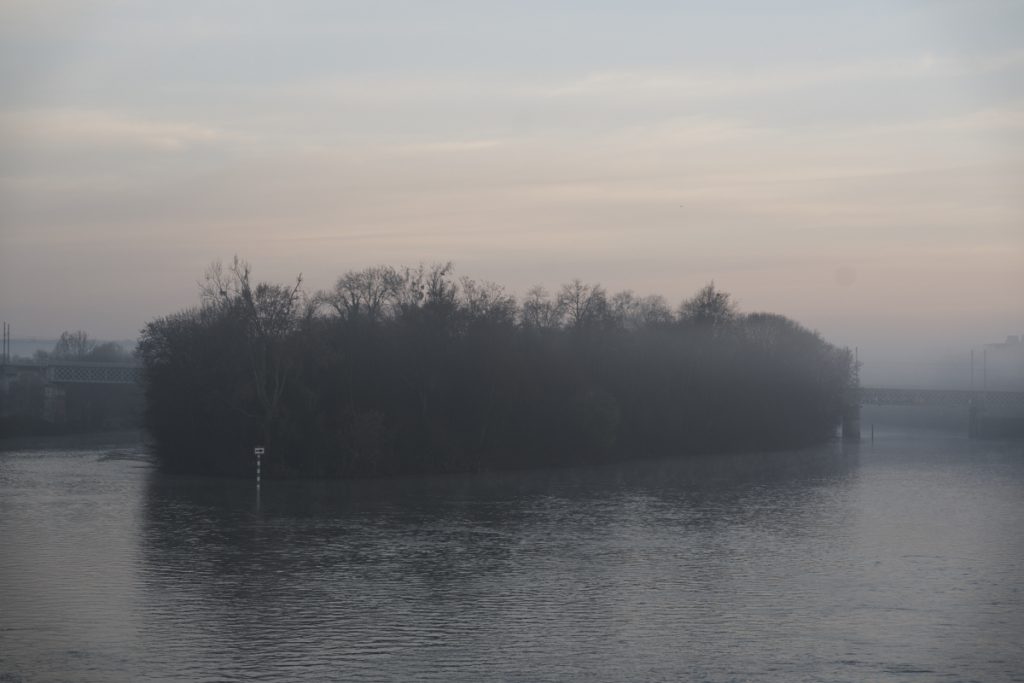 It is getting a bit better. An “ugh” shot progressing into a “yawn” shot. Dawn into yawn. Not good for my karma.

Then I remembered my friend Boris’s mantra. A shot without foreground, shtunk! Where could I find foreground? Ah, going down close to the water, might there be something? 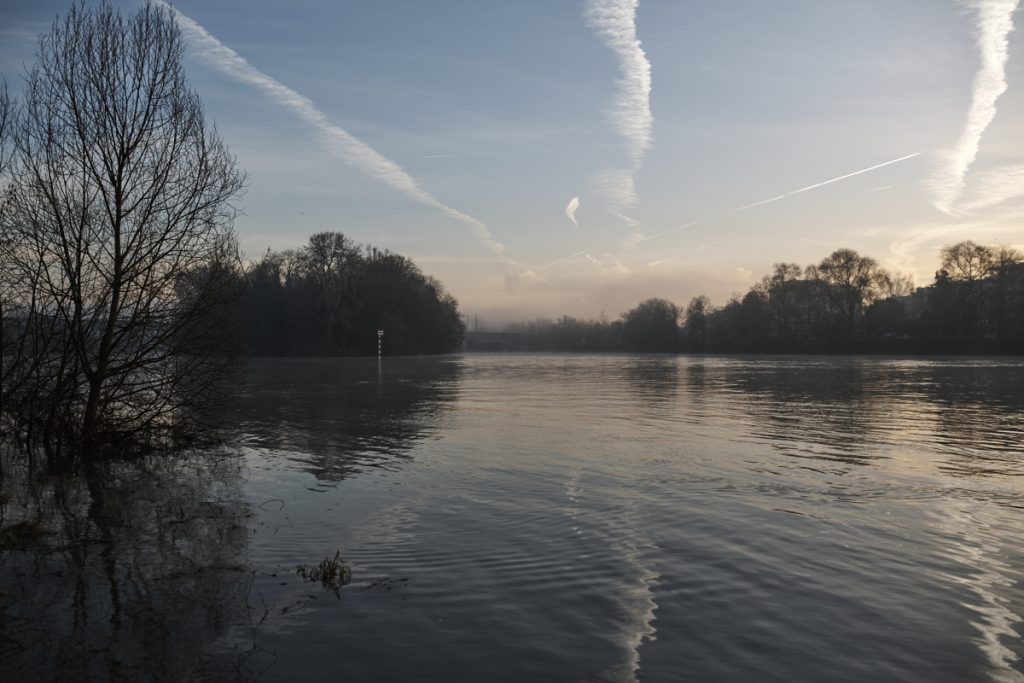 Of course, Boris would barf, because there are contrails, and even, in the background, a train bridge. But, hey, this is minimal-expectation day, right? Pascal probably wincing. His hopes of ridiculing me recede ever so slightly. Maybe I didn’t come for nothing, after all.

Last attempt at getting something from this spot… 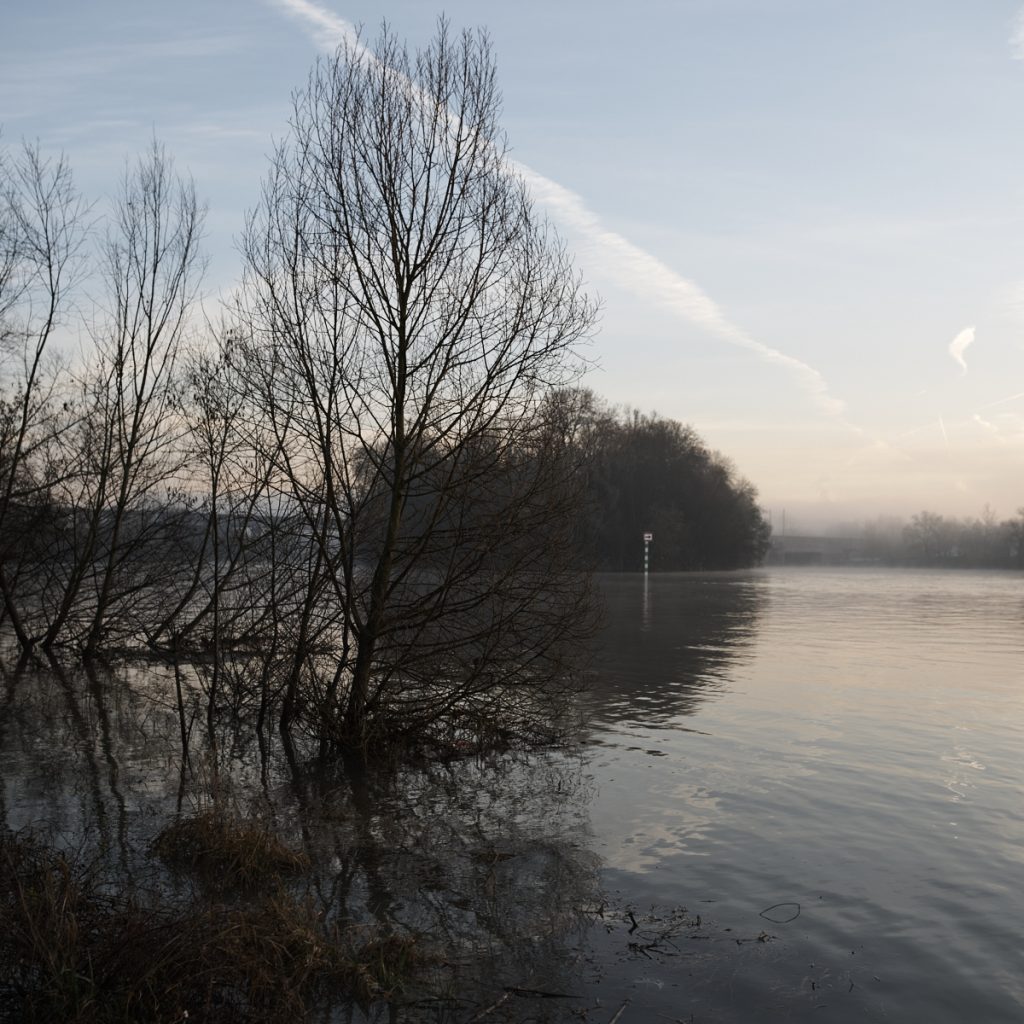 That is actually a lie. Of course I shot it more times, and worked the spot, though my freedom was limited by my stupid reluctance to take my camera for a swim. Yes, the flesh is weak, and Sony’s waterproofness even more so. But I did get a couple of decent shots that show the Sony’s dynamic range, and the amazing colours from Zeiss’ Otus 28. Not great, not by any stretch of the imagination, but not that bad either. I might even come back at some point.

But the sun was now out, time to go back, and I had the prospect of climbing the 200 steps, and the inclines. Yuk! Pascal will have the last laugh after all.

How unexpected is it to find a grazing ram, on the hillside of a royal castle in a suburban area? 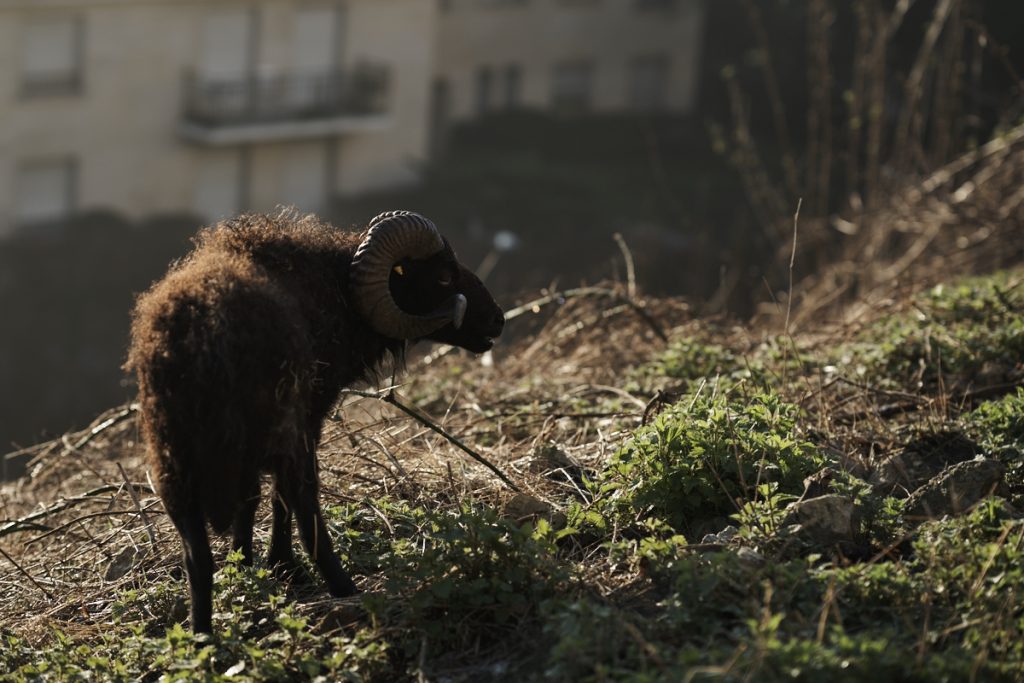 So, who has the last laugh, after all? A pretty picture it isn’t. But fun? Yes!

So, finally, I’ve had my fun, Alpa/Phase or no Alpa/Phase. Take that, Pascal! Oh, wait! What if his constantly looking at superb photos and moaning, while I produce the results above, actually drove/drives him to being a far better photographer than I? And this is something that no amount of gear can change. If you ain’t got the subject,the light, and the ‘tog, you’re toast. With expensive gear, it’s expensive toast. Caviar anyone?

About that Alpa / Phase topic … stay tuned, my pitiful attempt at self-justification is waiting to be published.

More importantly, we’ve been experiencing technical difficulties. A recent WordPress update has deleted all recent comments (thanks Pete for being the first to point this out to us). After some fighting with backups we are now back to normal except for the Leica M10 review, which some of you may have received twice in their mail box and for which all comments prior to backup restore were swallowed by a black hole. Apologies for both issues (and for whatever comments we might have failed to publish, reply to …) If you had something to say about Paul Barclay’s interesting review, please repost the comments now, they should be safe 😉 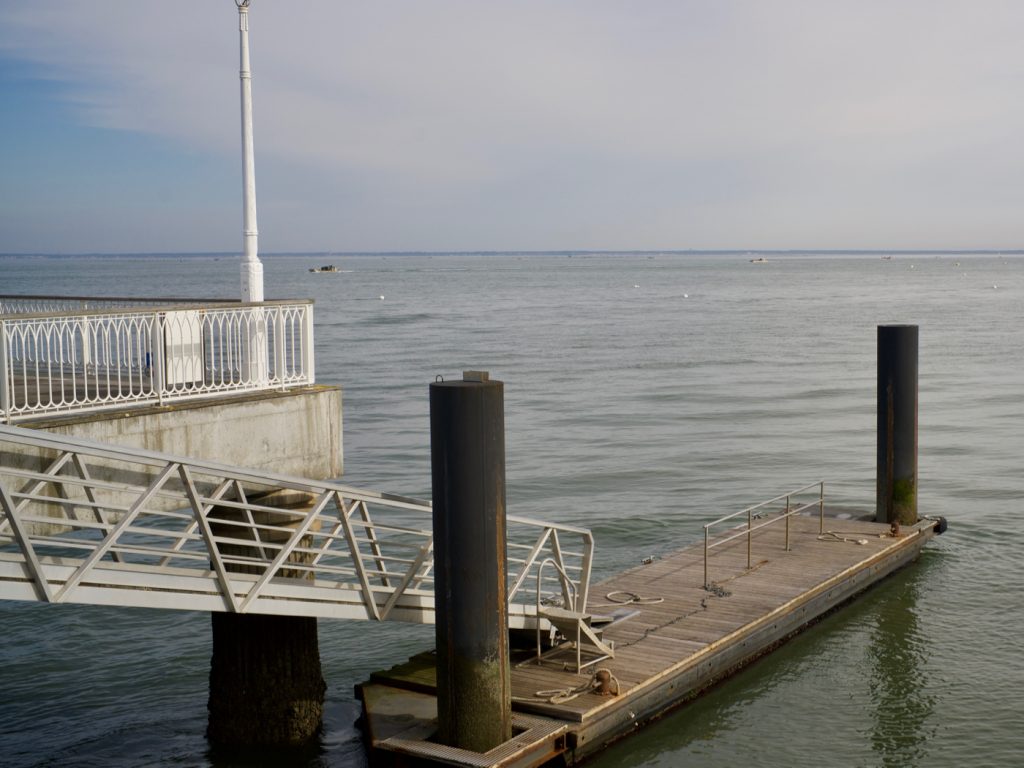 #524. Why your high-end camera also loves your Smartphone

Previous Post #567. Leica M10 review: A first Opportunity to Get a Second Impression Next Post #569. Putting a Pin in (my) Medium Format Ambitions