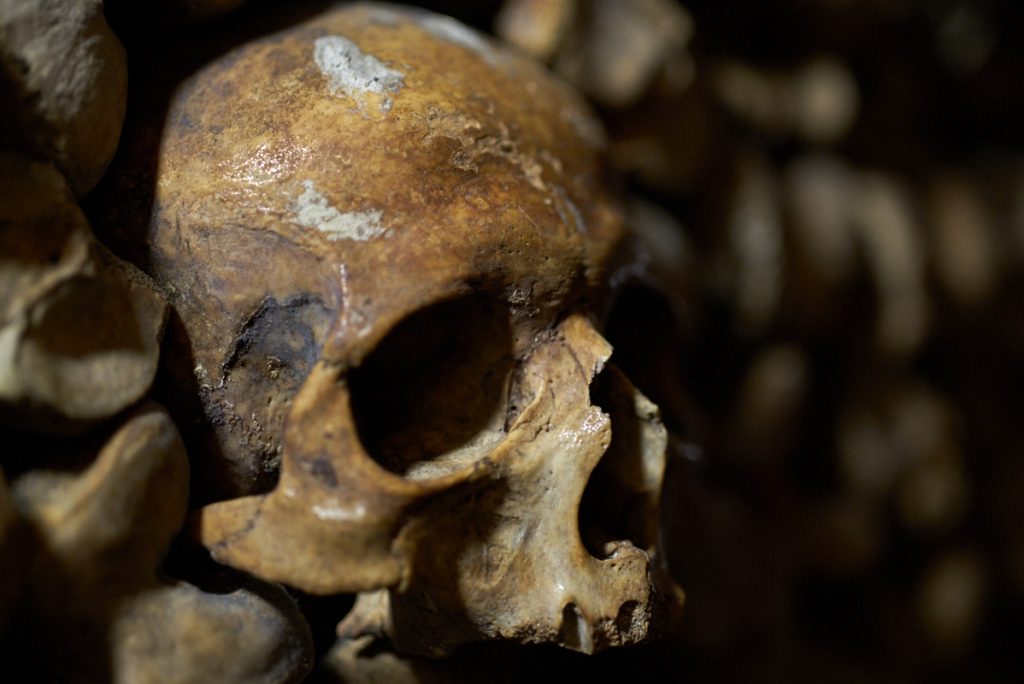 Sometimes photographers get lucky with the weather, and sometimes they don’t. For the first round of Ze Workshop, weather was really outstanding. But that doesn’t mean that Pascal and I didn’t have any plans in case that wasn’t so. And preparing for Ze Workshop – le Retour (Ze Workshop is back!), he and I scouted a location which can safely be described as weather-proof, because it is underground. Underground as in “6 feet under”, because it is litterally the world of the dead. It is an ossuary where the remains of more than 6 million people rest. Welcome to Paris’ Les Catacombes. http://www.catacombes.paris.fr/ 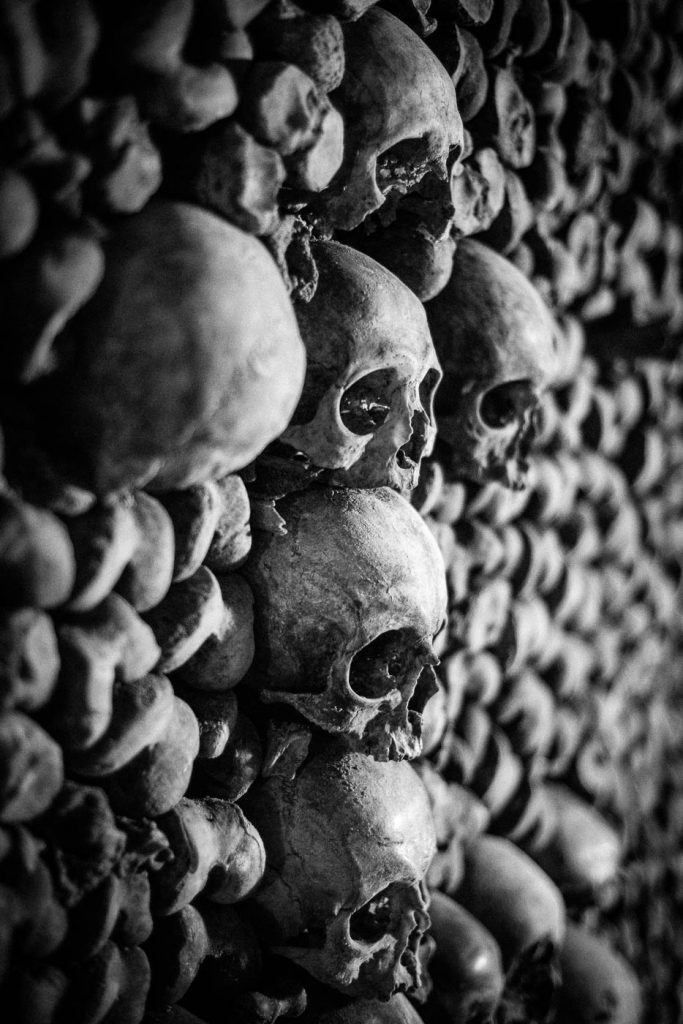 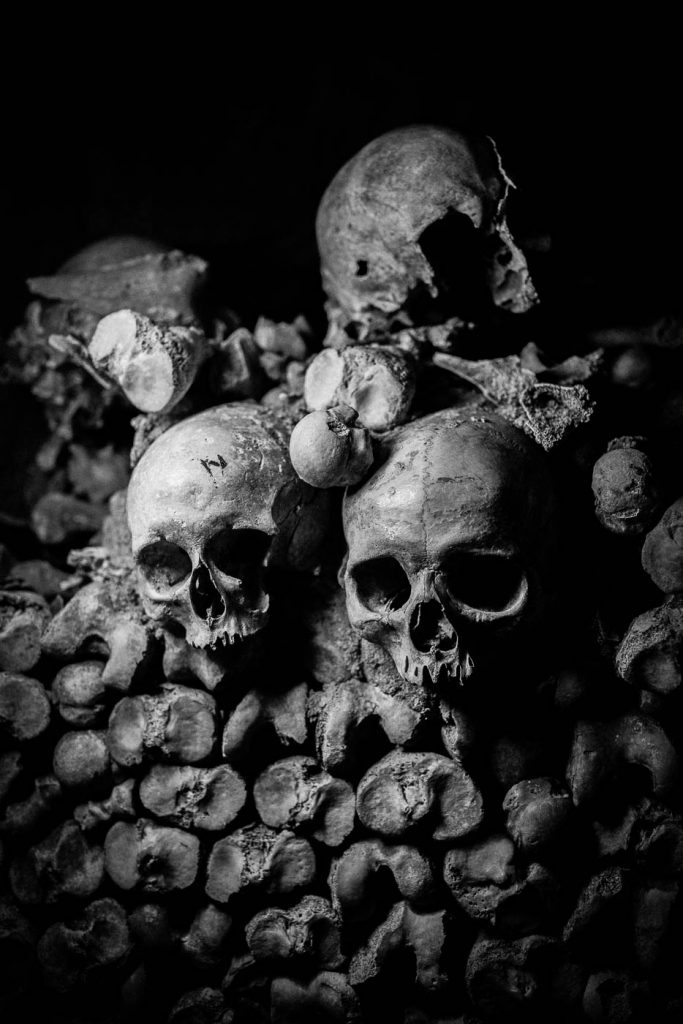 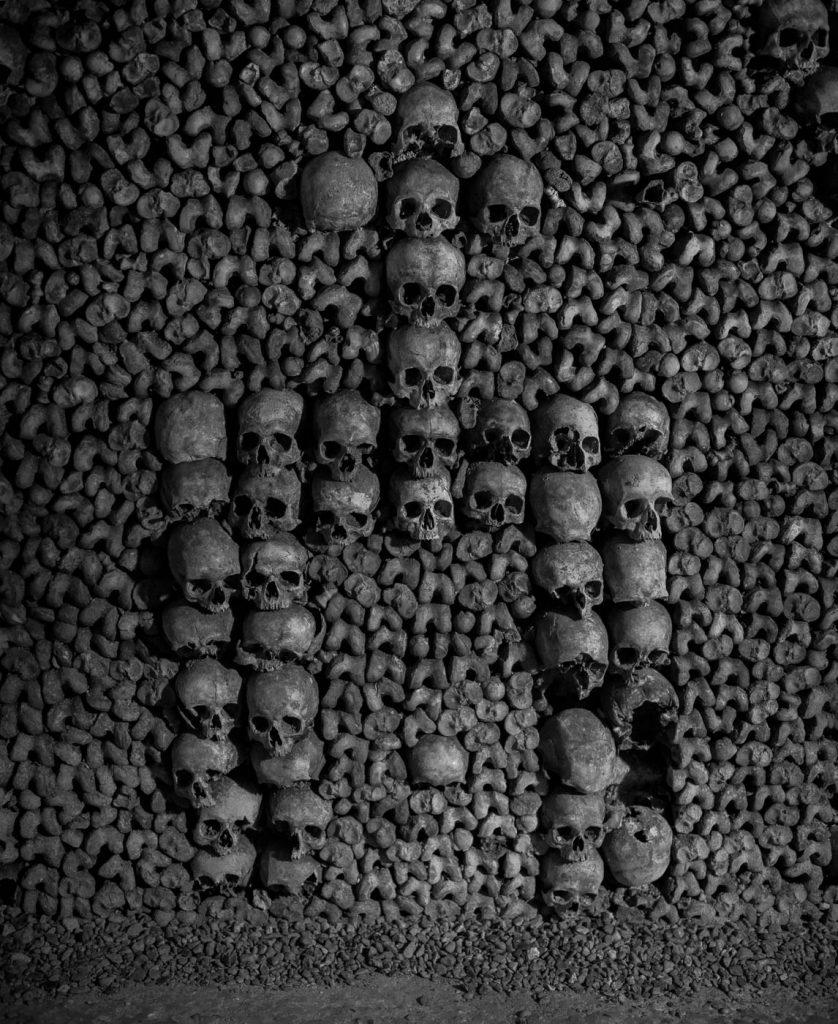 Now I fully understand if such a photographing location isn’t to everyone’s liking or doesn’t meet with everyone’s approval. The site had been on my bucket list for many years, but with some kind of a guilty feeling, as though visiting there could only attract ghoulish voyeurs. Fact is, Pascal and I decided to put our squeamish reservations aside in favor of our workshop’s interests, and there we went. After all, the “Haunted Mansion” is one of the more popular rides of Disney theme parks, except that this isn’t Disney, this is very, very real. The huge number of bones come from above-ground (meaning “normal”) cemetaries in and around Paris that were dug up and the land put to other uses, including around the Revolution when churches and surrounding cemetaries were no longer welcome.

Some caveats first. The site is small, and the number of people allowed inside at any time strictly controlled, so expect a significant wait in line. Not less than an hour is what we are told. Then, lighting is poor and flash not allowed, let alone tripods. This is strictly for stabilized cameras, fast lenses and high ISO. Pascal and I both used our f:1.4 lenses wide open. Pascal went up to ISO 6400 while I wimped out at ISO 3200, and, as usual, he was right, 6400 is fine on the A7RII. The tour is some 45mn long, beginning with a 180-step descent, then a long tunnel walk before getting to the quick of things (quick, as in “the quick and the dead”). Beware of cool temperatures, wet ground and narrowish corridors. It feels a bit like being down a mineshaft. Not for the claustrophobic! 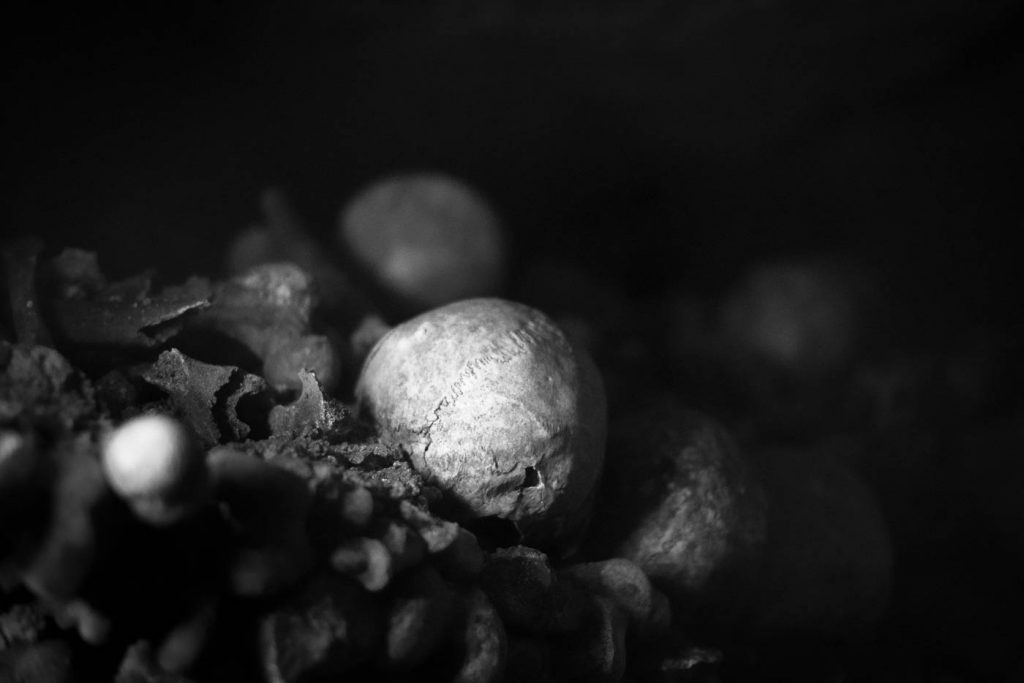 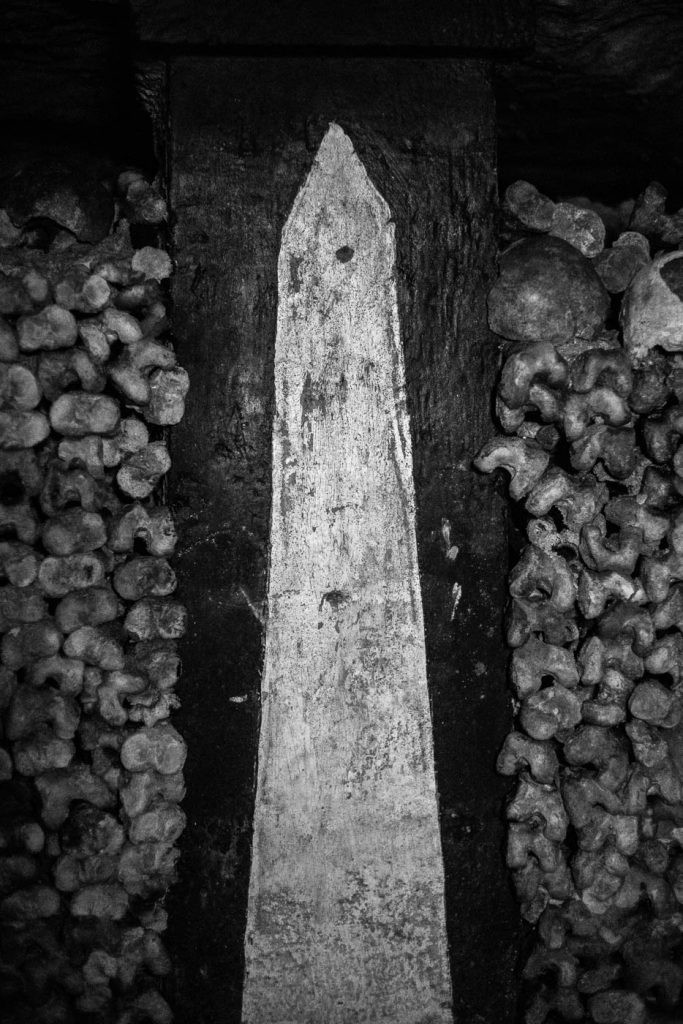 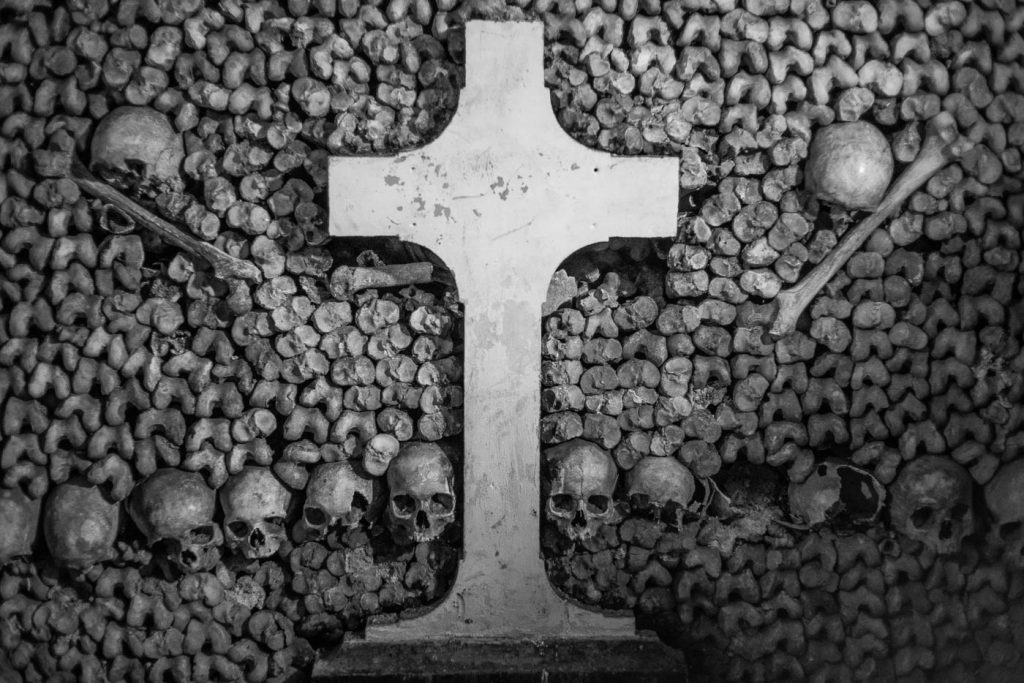 So, what does it feel like, assuming that what it looks like will be conveyed by our pics? Frankly, I expected that the contents would weigh much more heavily on the mood and atmosphere. Maybe the presence of many other tourists, all happily shooting away with their smartphones and tablets robbed the place of the solemnity and haunting nature which I expected and both craved and feared. 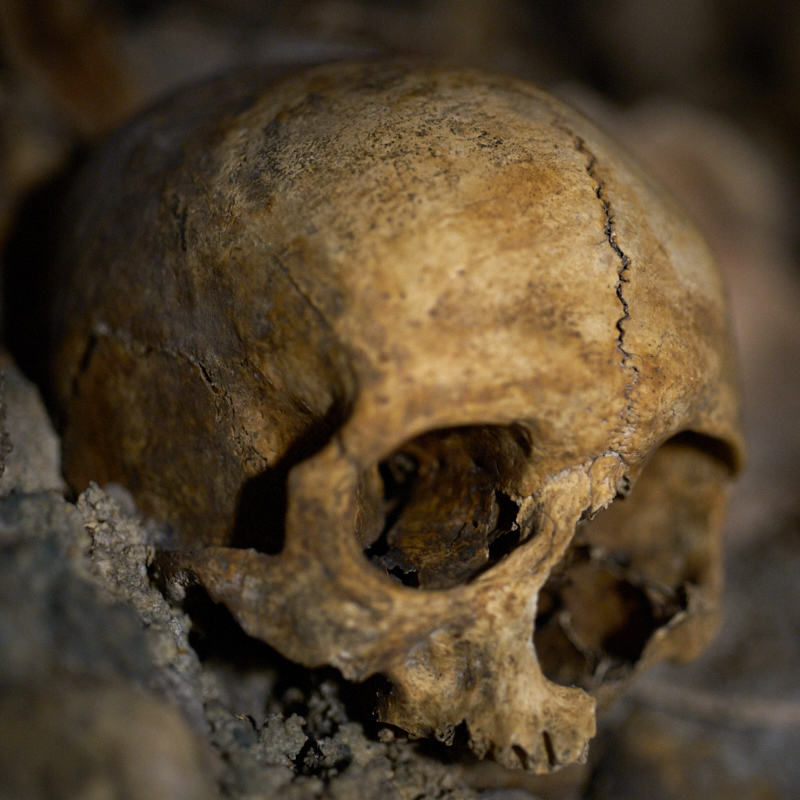 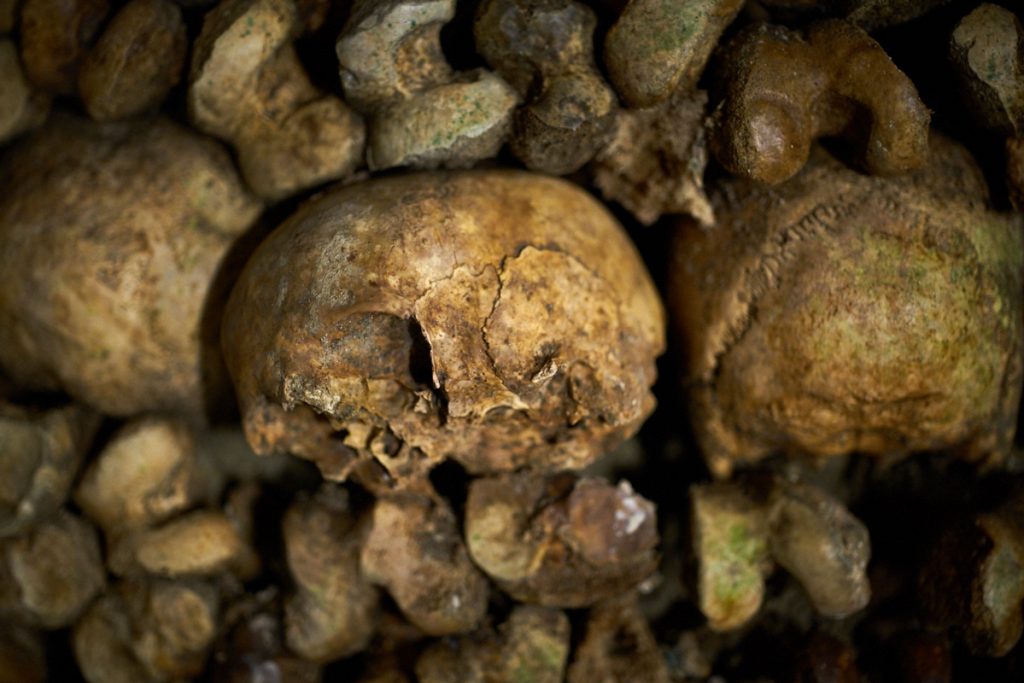 Photographically speaking, I was looking forward to doing my own version of what is called a vanitas, or vanity painting. The inclusion of a cranium in an everyday scene, showing the world that we will all one day turn to dust, and thus the vanity of wordly trinkets and positions. So I looked for close-ups. I shot exclusively Otus 55 on my A7RII

Pascal on the other hand had other goals in mind, and due to his use of his ZM 35 f:1.4 and 50 f:1.5 couldn’t get as close to his subjects as I. Hence, one more time our pictures look really different even though one would have thought -or at least I would have thought- that the very limited amount of “play” that the subject and lighting conditions gave us would have mitigated our natural differences. 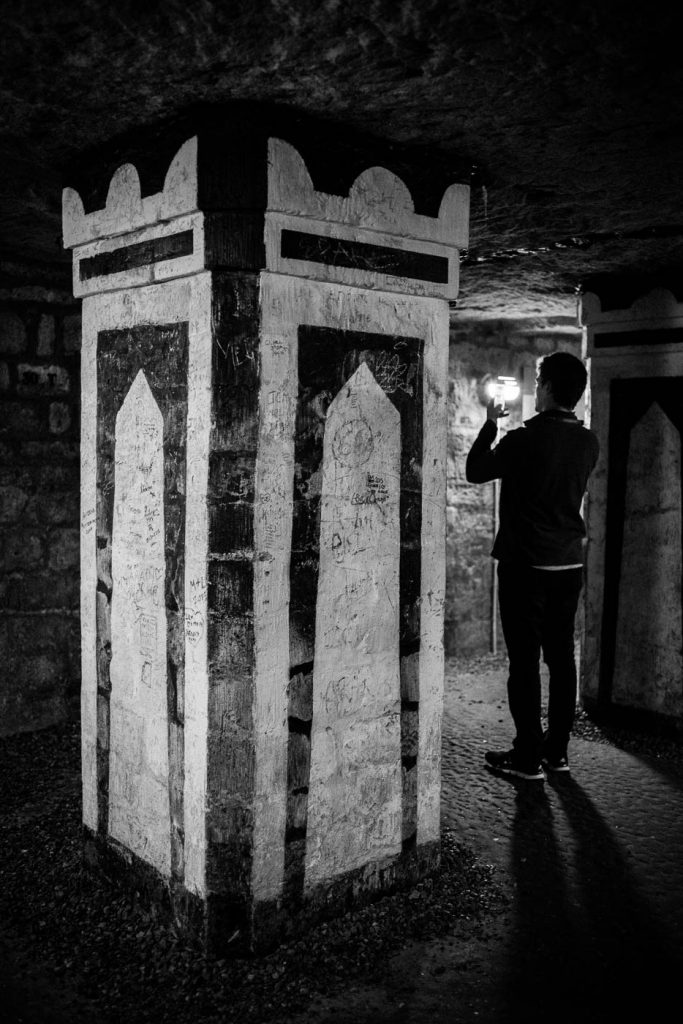 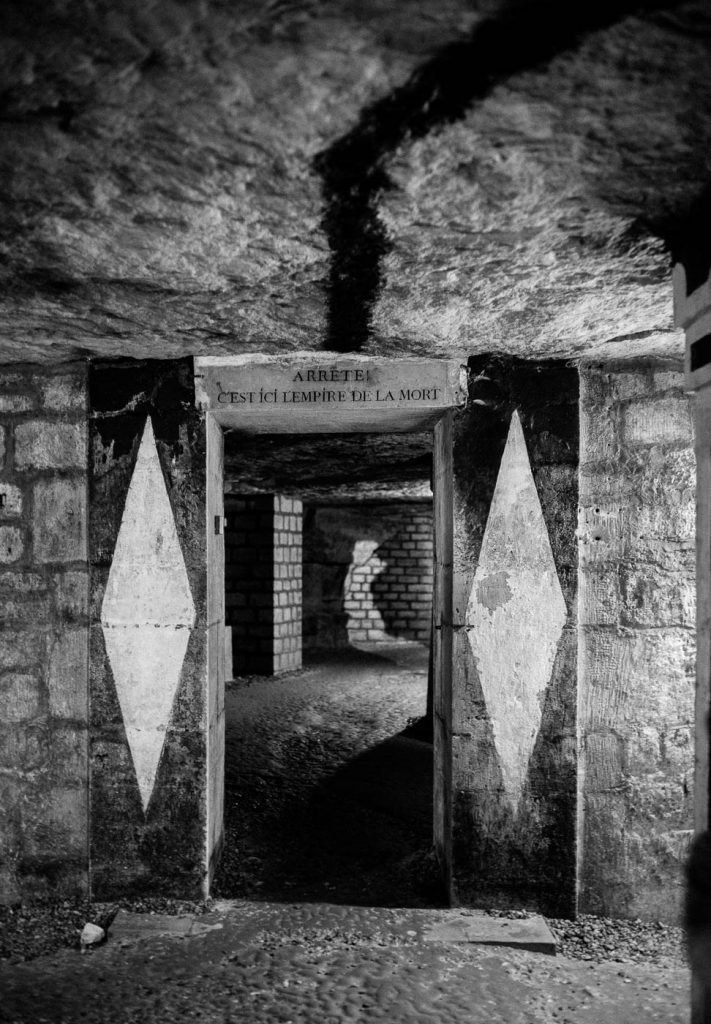 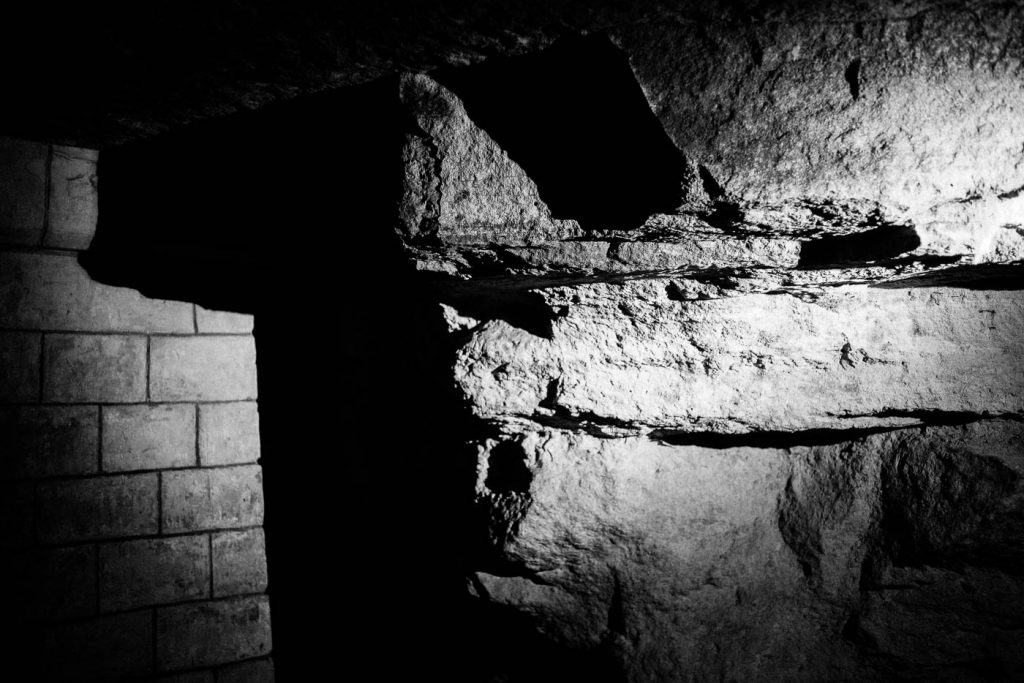 As it happens, Pascal chose to go all B&W, and I all colour, so you can easily see which is which. Also, Pascal shot quite a bit of the corridors, and I not. Another of our differences. 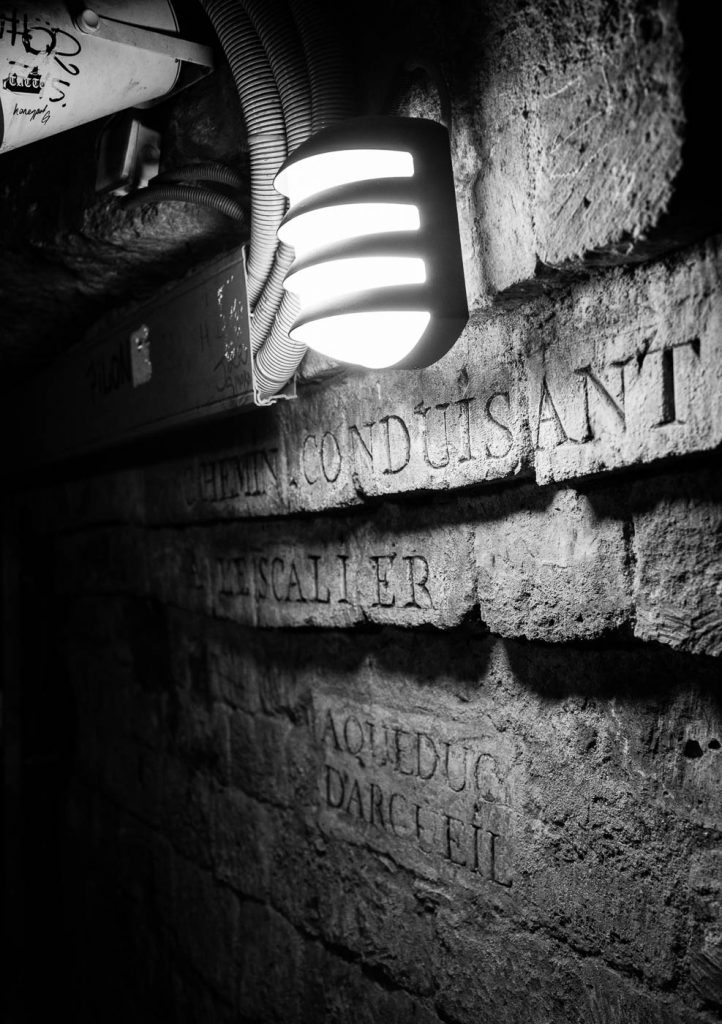 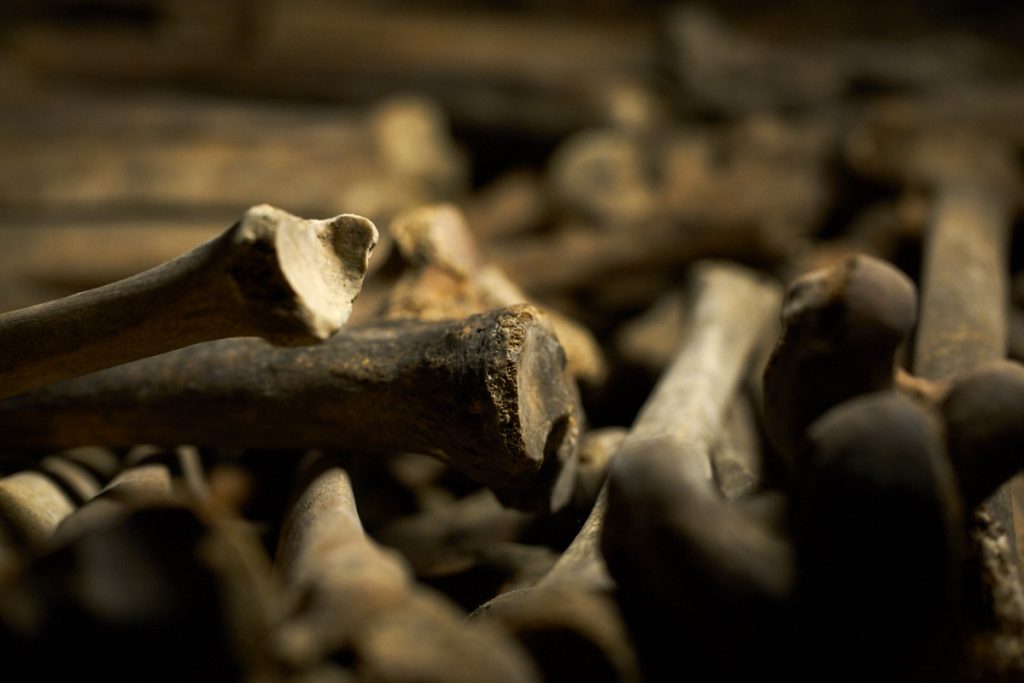 So, there it is. Once more, proof that nice pictures aren’t necessarily restricted to pictures of nice things, and that quite a few times, there are hidden gems totally off the beaten path.

PS: in a totally unrelated way which is pure coincidence and not some kind of macabre humor, now is the time sadly forced upon DearSusan to bid “Adieu” to Michael Reichmann, the founder of “Luminous Landscape”, who passed away a few days ago. His was (and remains to this day) one of the first high-quality photo fora, and he influenced Pascal strongly in his decision to create DearSusan. To Michael!