#452. A Beginner’s Review of NIK Film Effects Filters – or, How I Use Them Without Pain

While NIK Film Effects filters can certainly be used to rescue dodgy shots or to create wowish effects, my default approach is to employ the tools in NIK Color Efx and Silver Efx, just as I make use of PhotoShop: to realize the print (paper or digital) that I have in mind when I click the shutter. Sometimes, my intention is impressionistic, other times it’s realistic.

There should always be the understanding that photography is not a 1:1 translation of what we see with our eyes. In other words, photography is always subjective, regardless of intent. There should never be an issue to be made of things not being rendered “as they are” – whatever that means. A photograph is no more the thing itself than a phonograph (or digital) recording is a musical performance. It is always thus – and that’s the end of it. The objective is to achieve the print desired, preferably when you took the picture.

It should go without saying (that’s why I’m saying it) that I start with an image that gets me on the right track: correct choice of focal length, exposure, camera attitude in relation to the subject, lighting – all these should be managed so that my digital darkroom can best take it from there without unanticipated losses or corrections.

First, a few quick and dirty before & afters.

When I shot this: 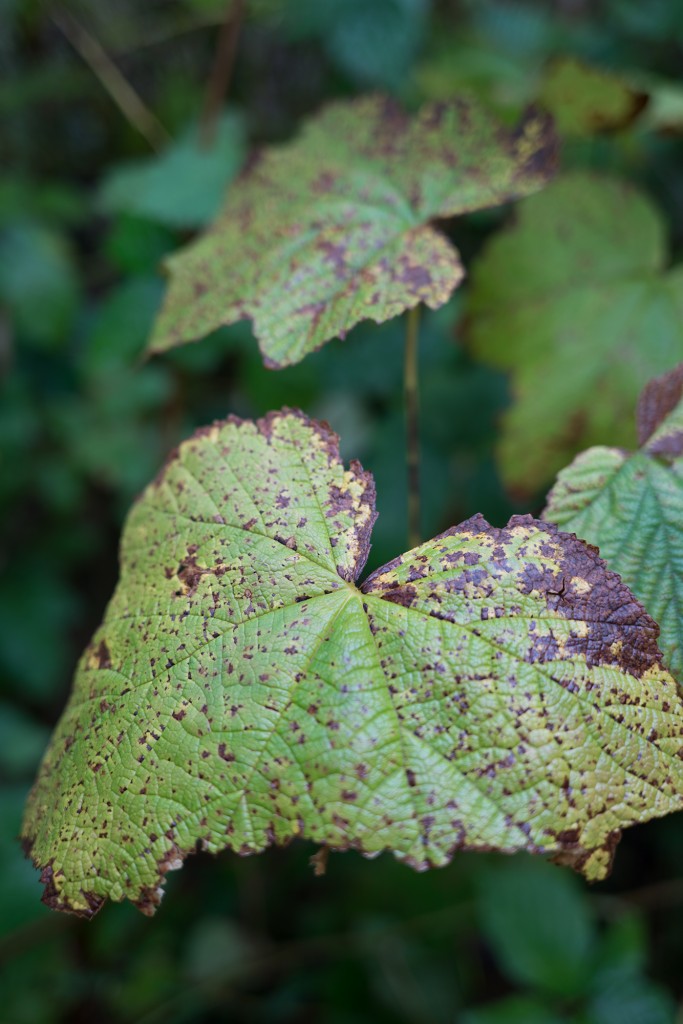 I had something like this in mind, accomplished with a healthy dose of NIK’s Ektachrome 64 Pro film effect : 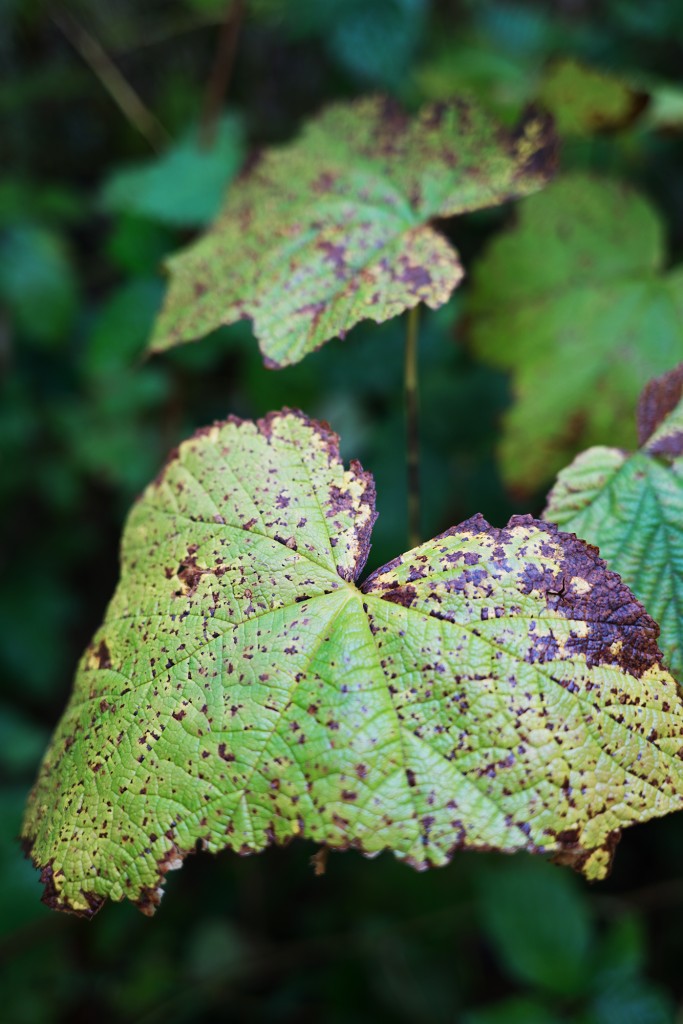 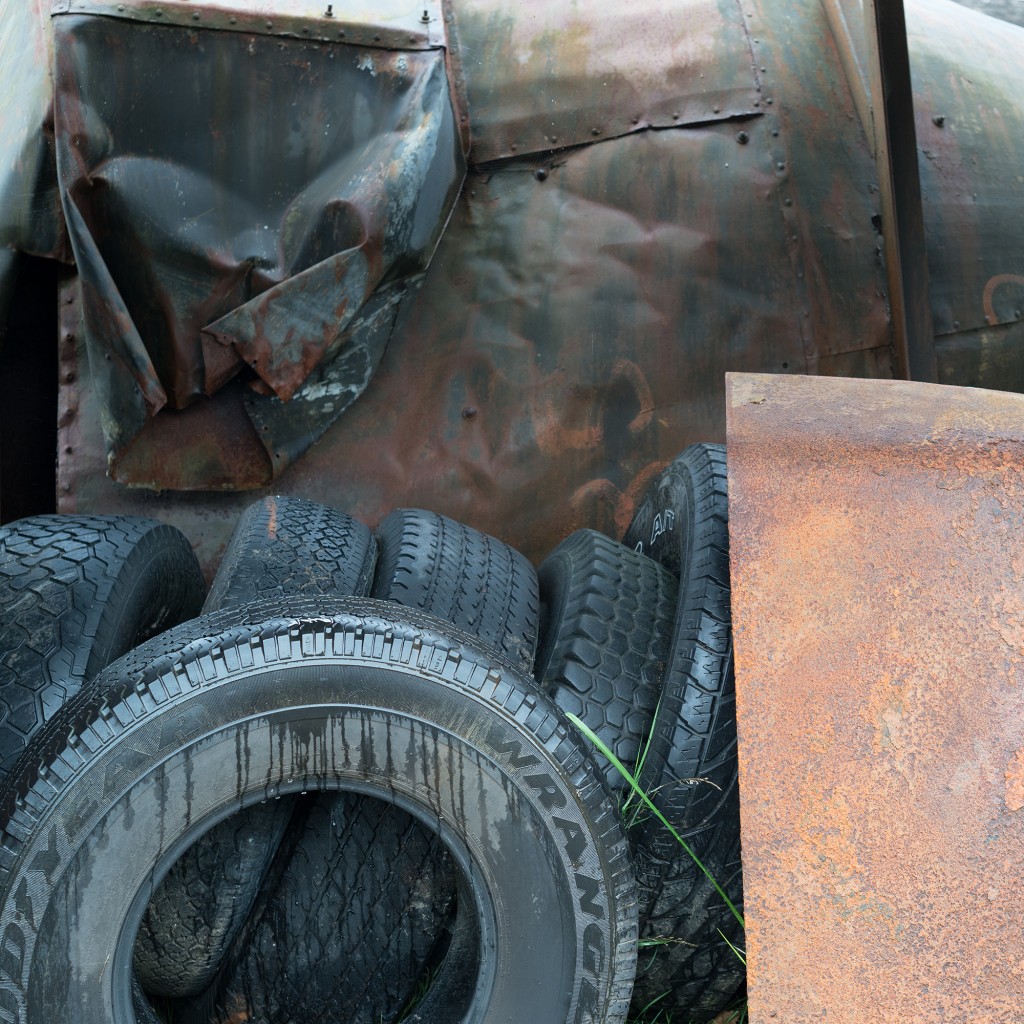 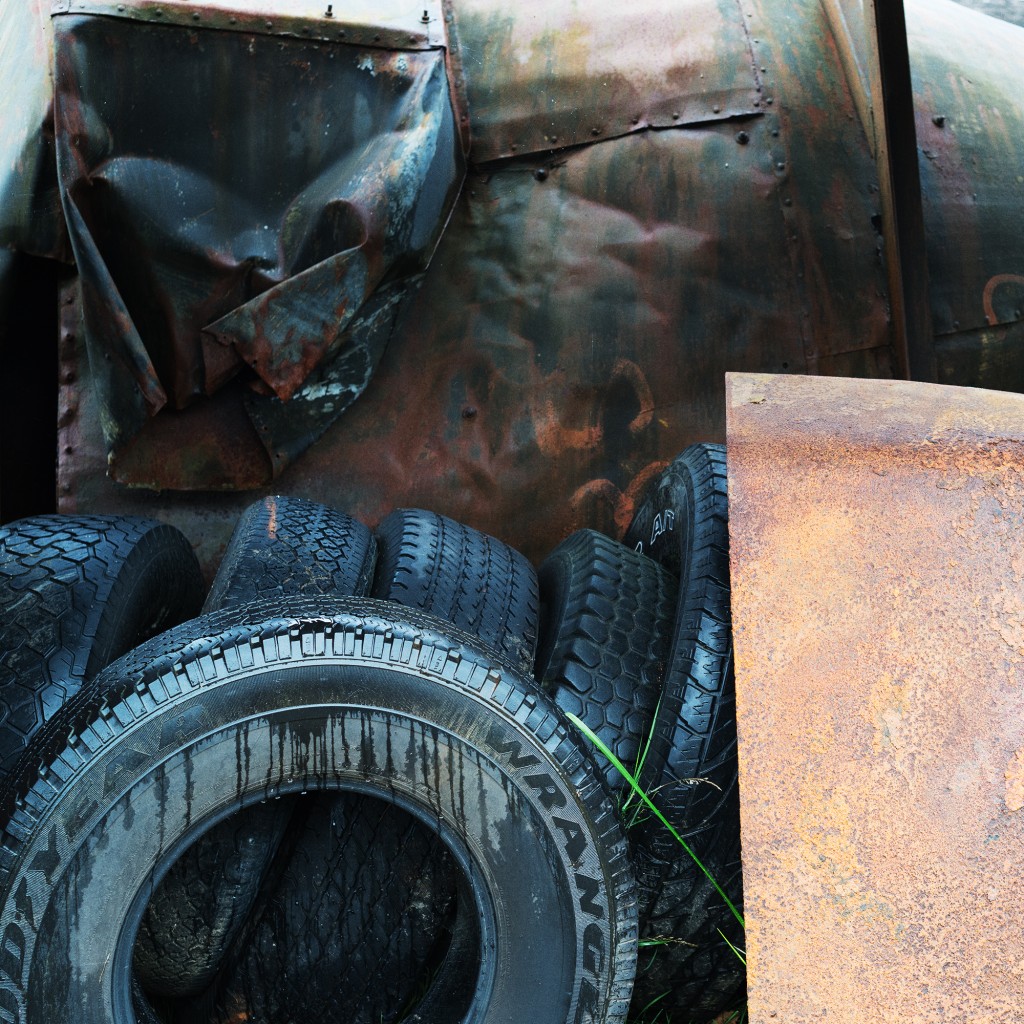 I had the wrong lens and position for what I wanted here, but film, as they say, is cheap, so I took the shot anyway. 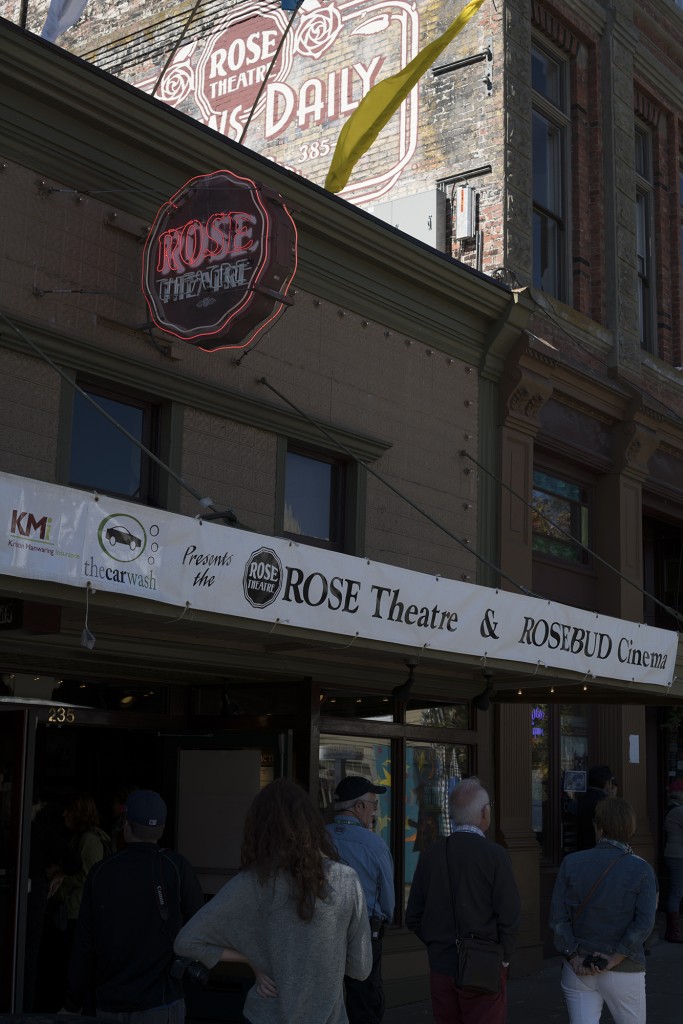 Thanks to a high-res image, I was able to crop, align and introduce a combination of K64 and Color Cast control filters for a deliberately rosy effect: 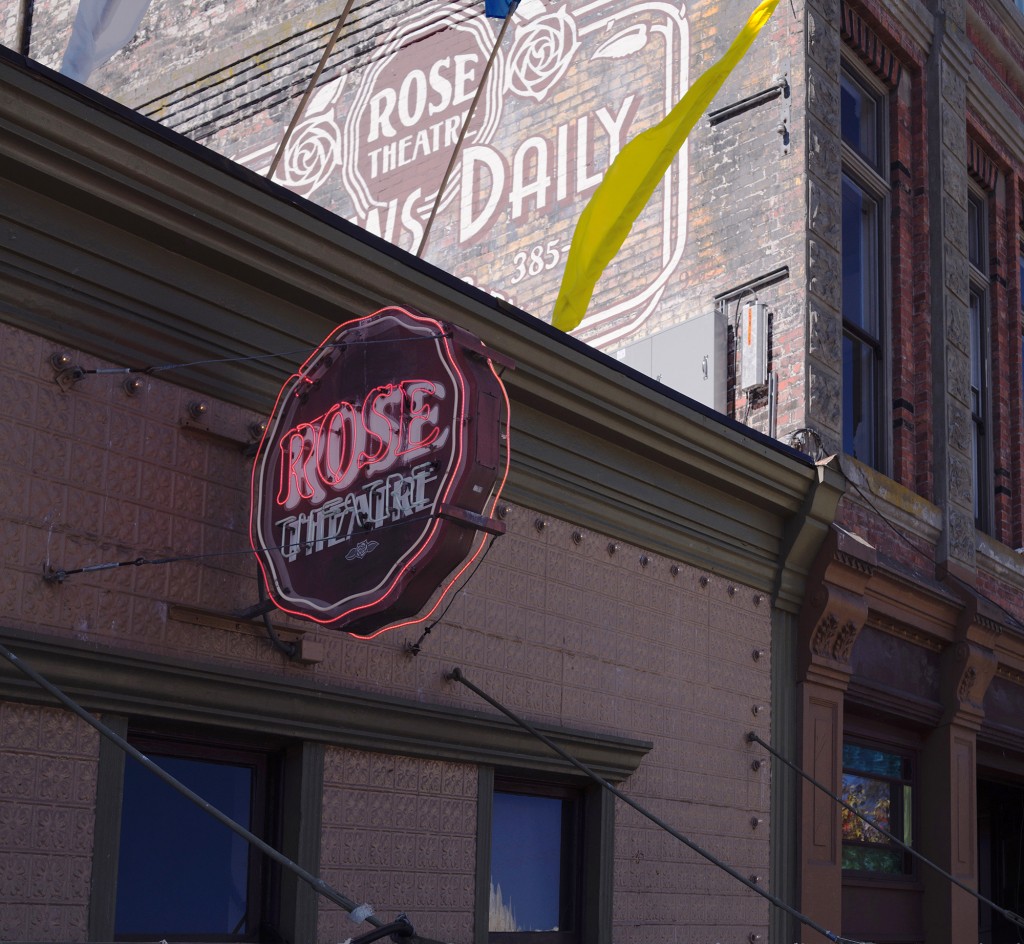 Here’s a couple of images that demonstrate my global process. First, a shot taken at roughly mid-day, though the dreariness of the light suggests dusk. 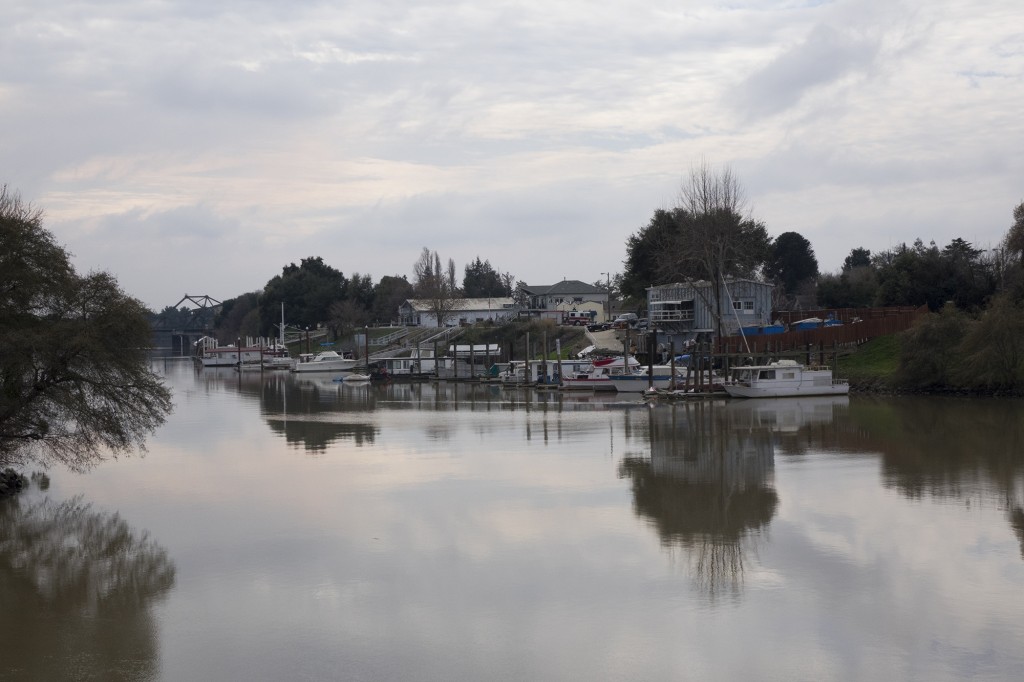 What I wanted was a brighter day with as little loss in the sky and its reflection in the water as possible. I also wanted a “truer” color correction applied to the boats and houses – in short, whiter whites, but not affecting the pink in the sky and water. I could use PhotoShop layers for this, and I usually do, but here’s an alternative. Using the Kodachrome 64 Pro filter in Film Effects in NIK Color Efx Pro, and increasing the Brightness slider about 10% and the Shadows another 15% I’m already in the ballpark of what I wanted, though there are unacceptable losses of color in the water and sky. 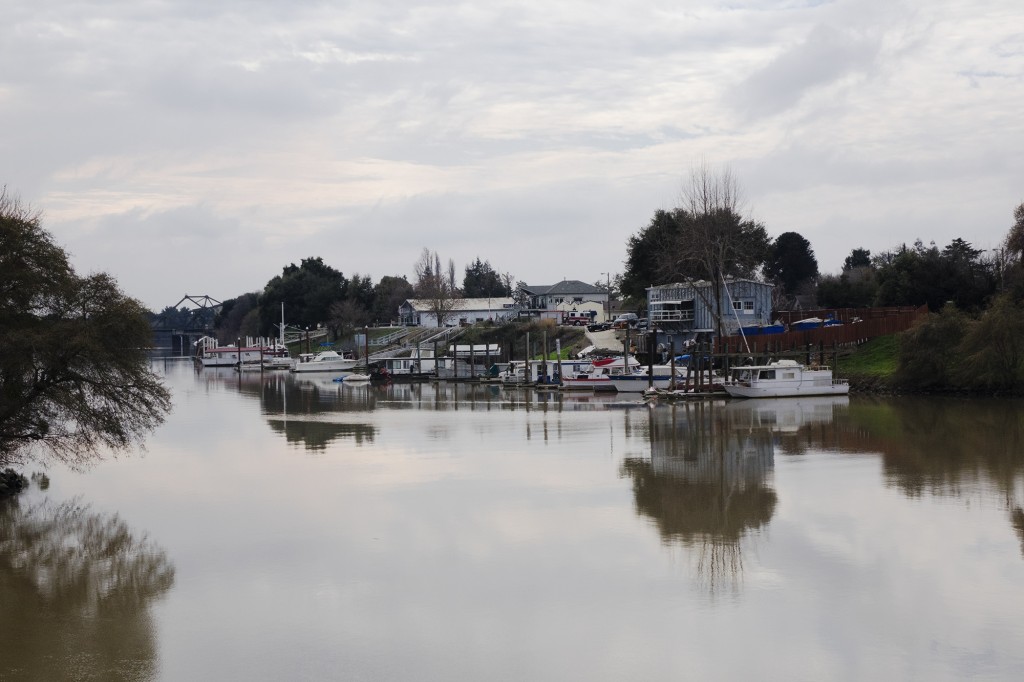 Before flattening the image I re-instated some of that original color in the water: 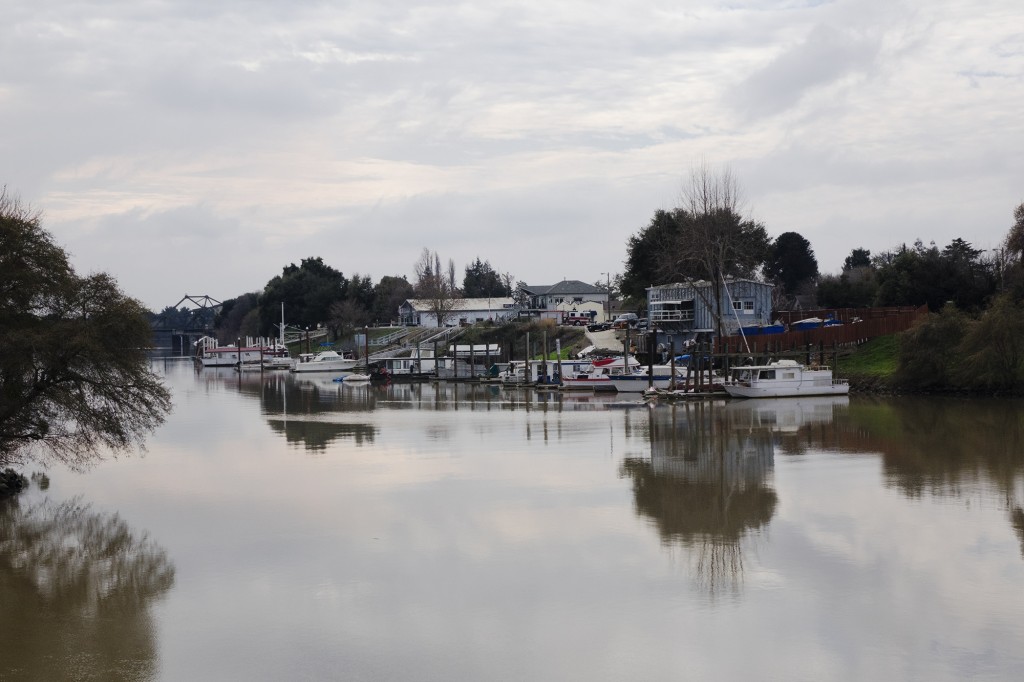 Here’s another direction entirely. Lately, I have often allowed myself to be seduced by the dark side. The rich cloud structure latent in the original image is manifest by adding the Dark Contrasts filter to the Kodachrome while still in Color Efx, and pulling back on the effect to suit: 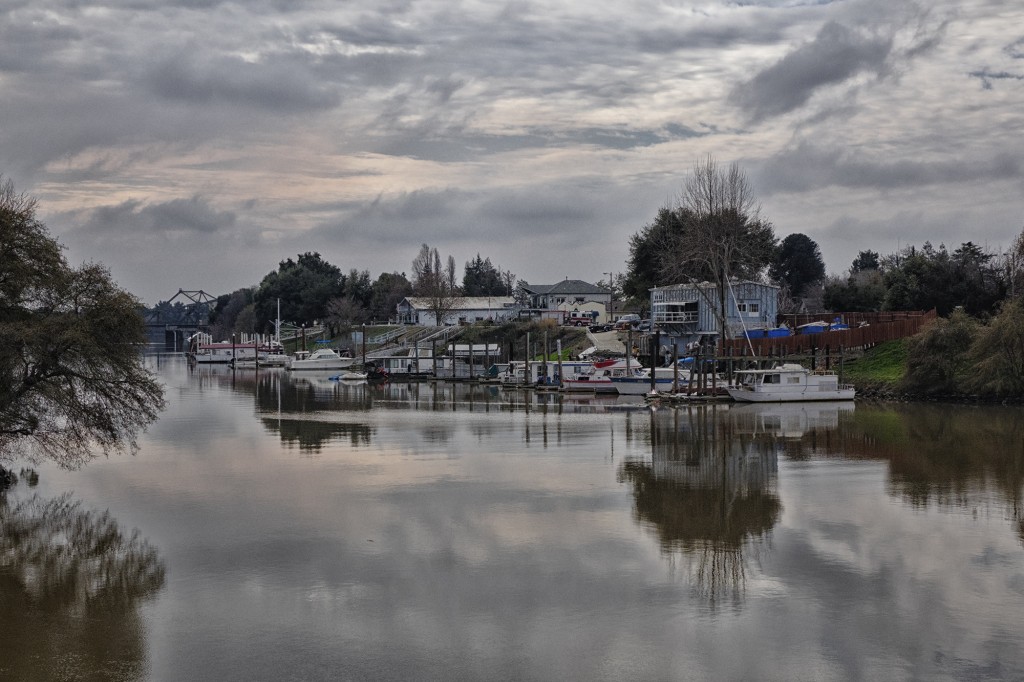 The same Dark Contrasts filter combined without pulling back to the Velvia filter makes for a more forceful, if surrealistic, painterly effect. A little much, perhaps. More shadow detail is wanting, yes? 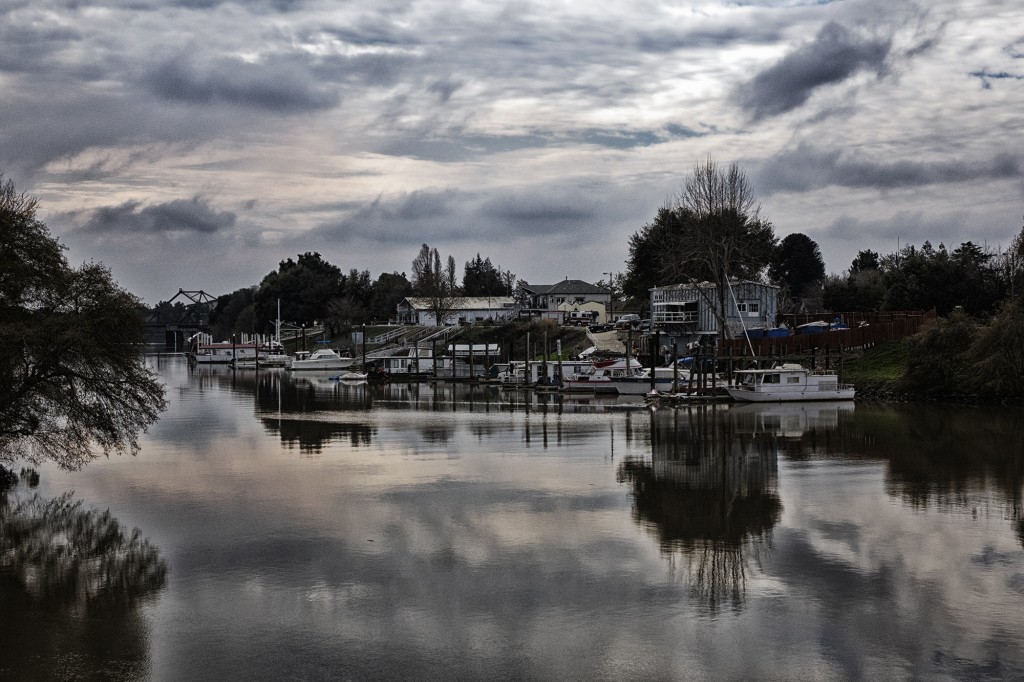 Closer to sunset that same day, this shot resulted in a very flat and peculiarly green image: 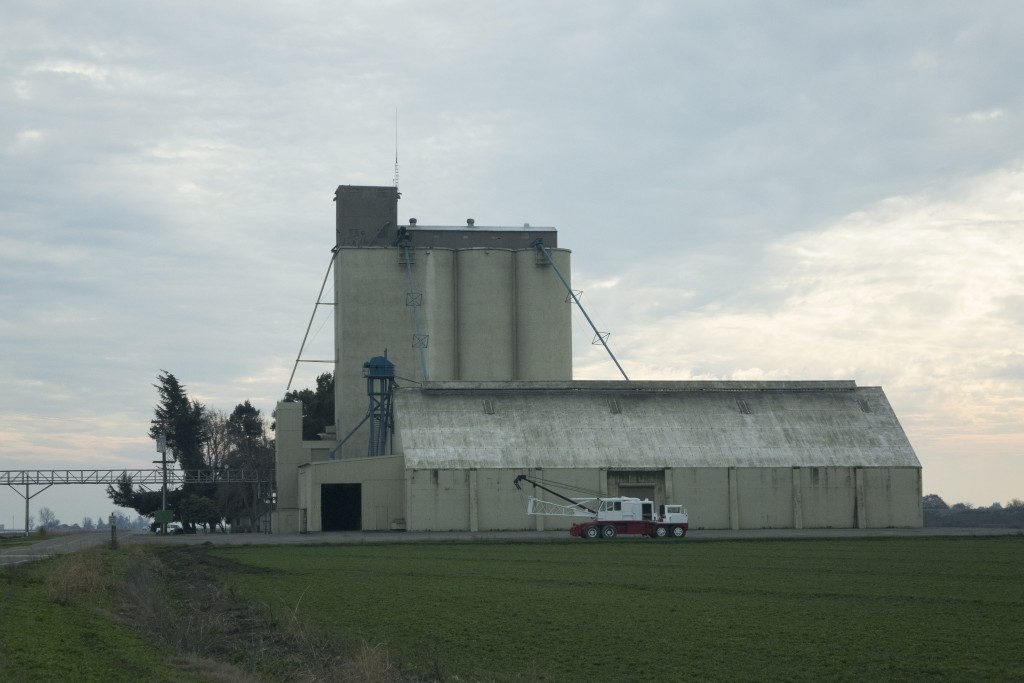 I applied that same Kodachrome 64 Pro which brought some life into the shot, but adding the Remove Color Cast filter and adjusting the slider to approximate a white/grey for the building was better still. Note that the truck in front of the building is close to white, which is important to use as a reference so that building does not go too white (regardless of its actual color in sunlight): 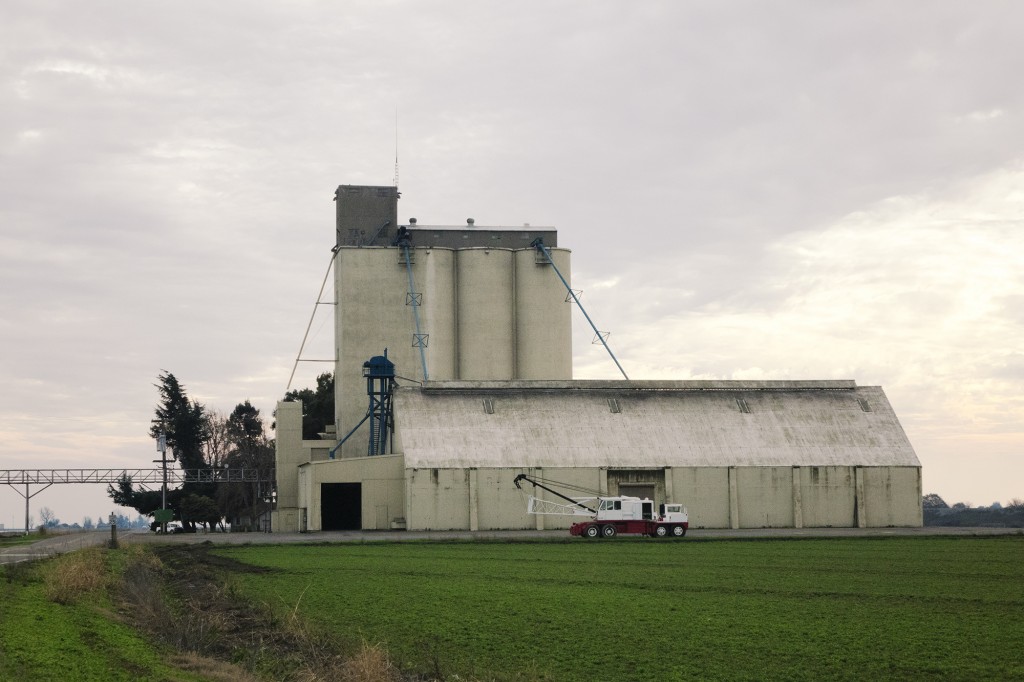 The truth is that when I took the picture I was thinking of something else entirely, which was to emphasize the starkness I “saw” in the light. NIK’s Paper Toner filter is just the ticket. I generally prefer a neutral Paper Toner effect. This one is #5. 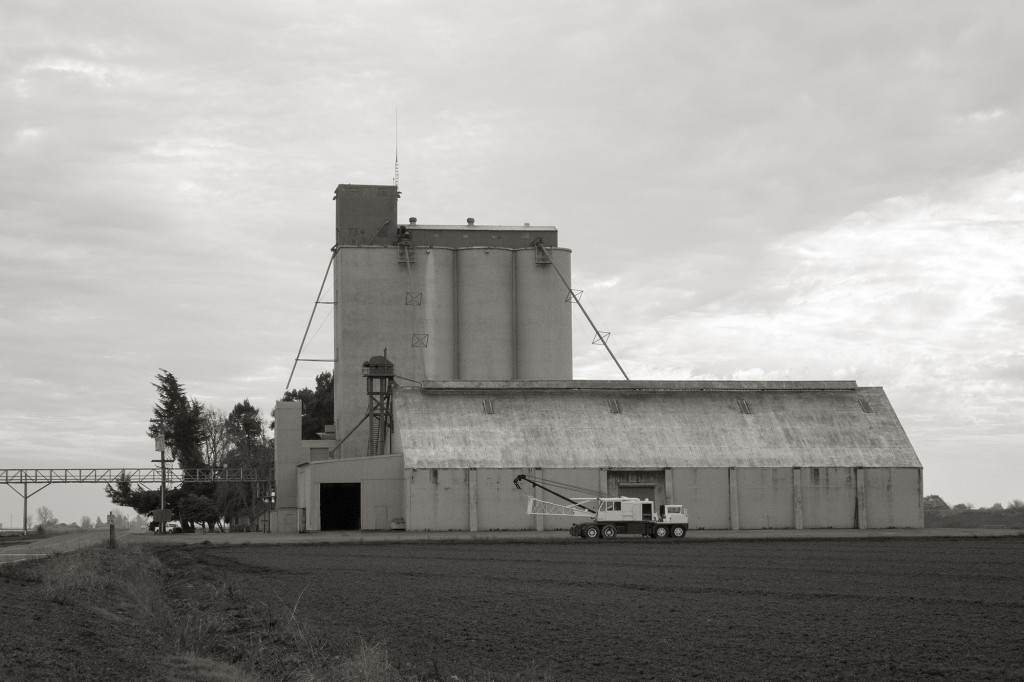 Either way, the illusion of a sunset is entirely lost, but a nice helping of Dark Contrasts against the Kodachrome 64 filter, and: Voila! Before flattening I brushed away some of the Dark Contrasts to give the building and foreground a chance to breathe: 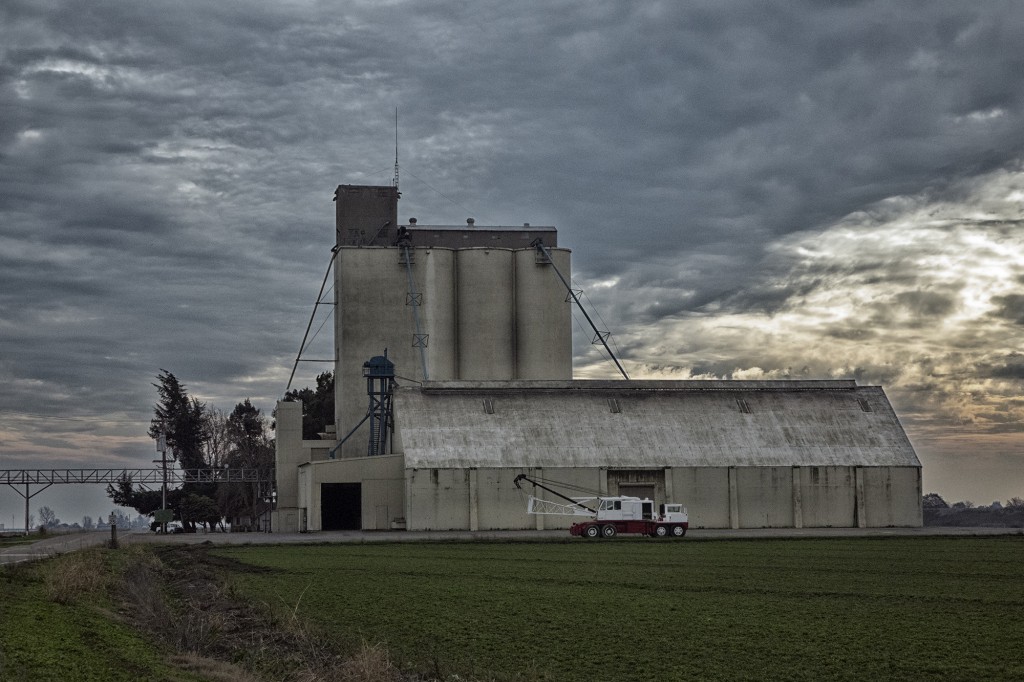 The key in processing, I think, is to not flatten layers too quickly. The application of any NIK filter results in layers, the other layer being the image prior to working in NIK. This gives you the opportunity to step back and seriously consider how much of the filter you really want applied. What looked cool while in the NIK application might seem overkill as you move the Opacity slider for the NIK layer toward zero effect. In fact, it’s a good idea to move it all the way to zero for a moment, just to remind you of where you were before you went bonkers with effects. 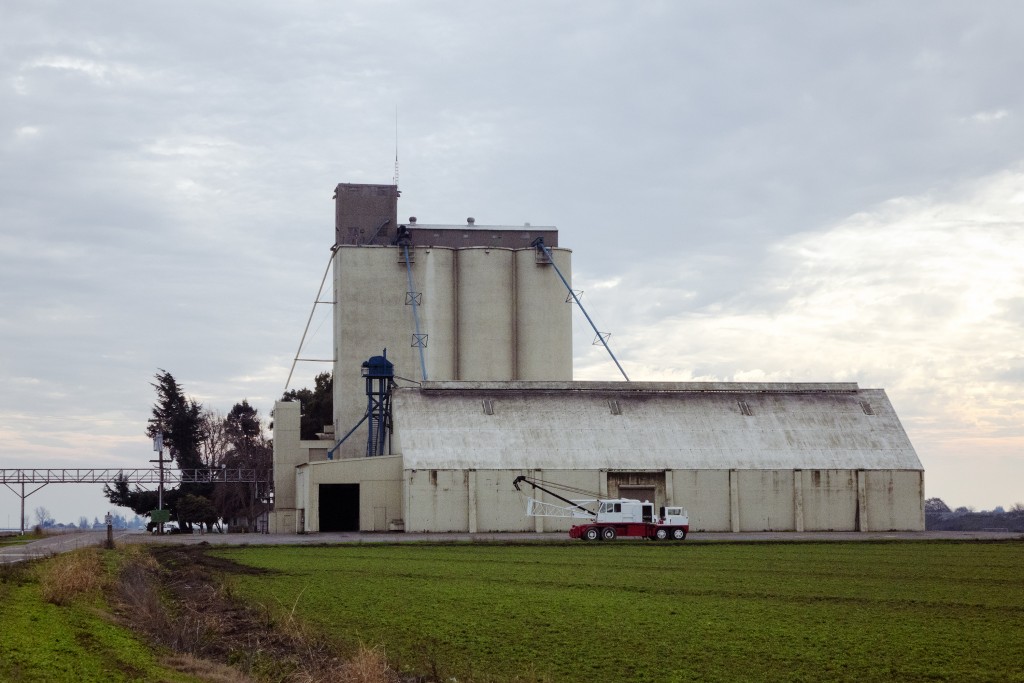