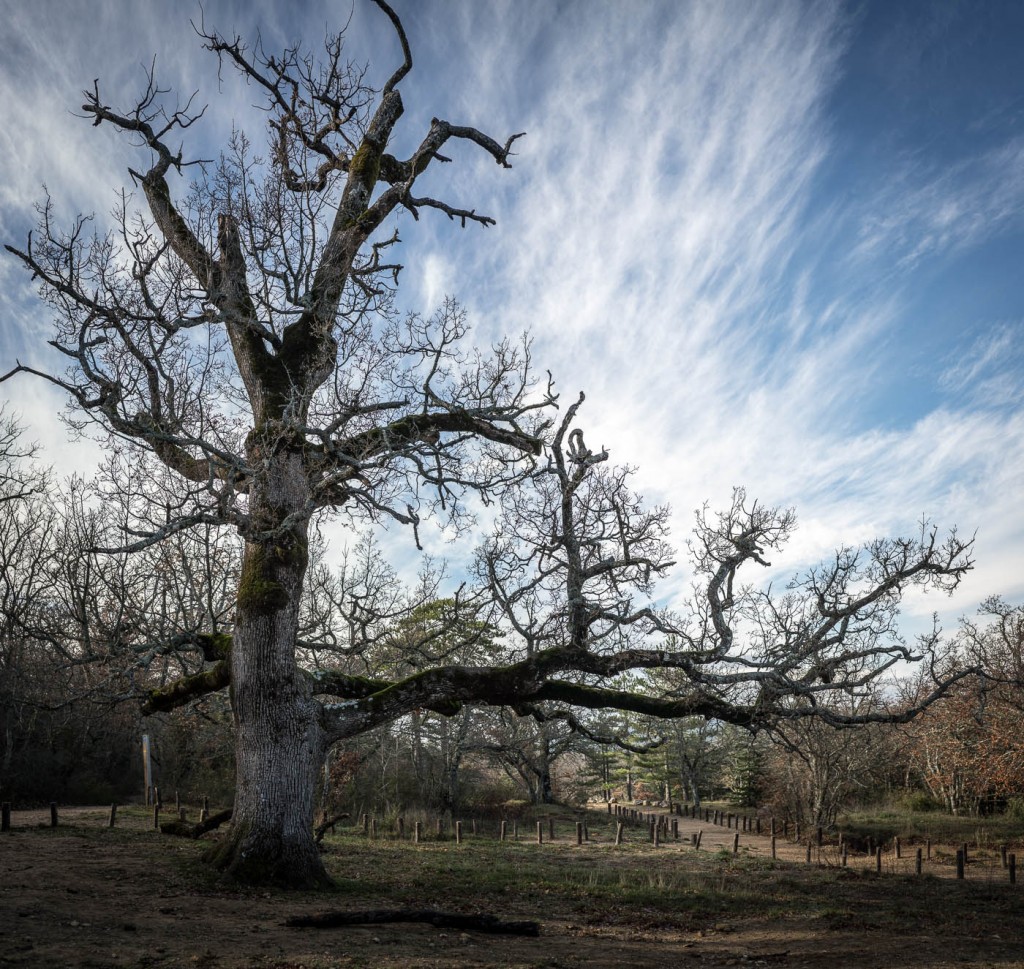 The Great Oak at the Start

Every year for as long as I remember, the morning of January 1st has been hike time. It’s become a ritual and I can’t think of a better way to kick a new year off. Obviously, in the past few years, this has also become an opportunity for photography 🙂

This year, the walk was in the Sainte Baume hill, a place I already visited with Philippe and regularly use for lens tests. Unlike previous posts, this time, I’ll be talking the walk along the ridge. 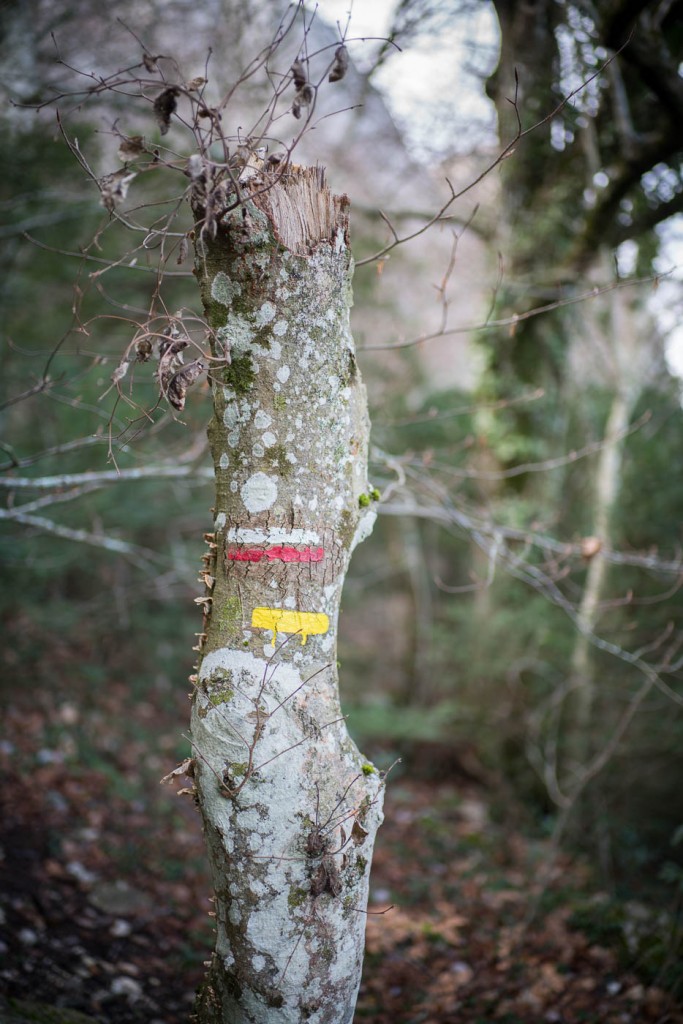 The hike begins in a car park marked by a huge ancient oak tree and climbs the abrupt forest along an ancient pilgrimage of kings that still sees thousands congregate at every religious feast. 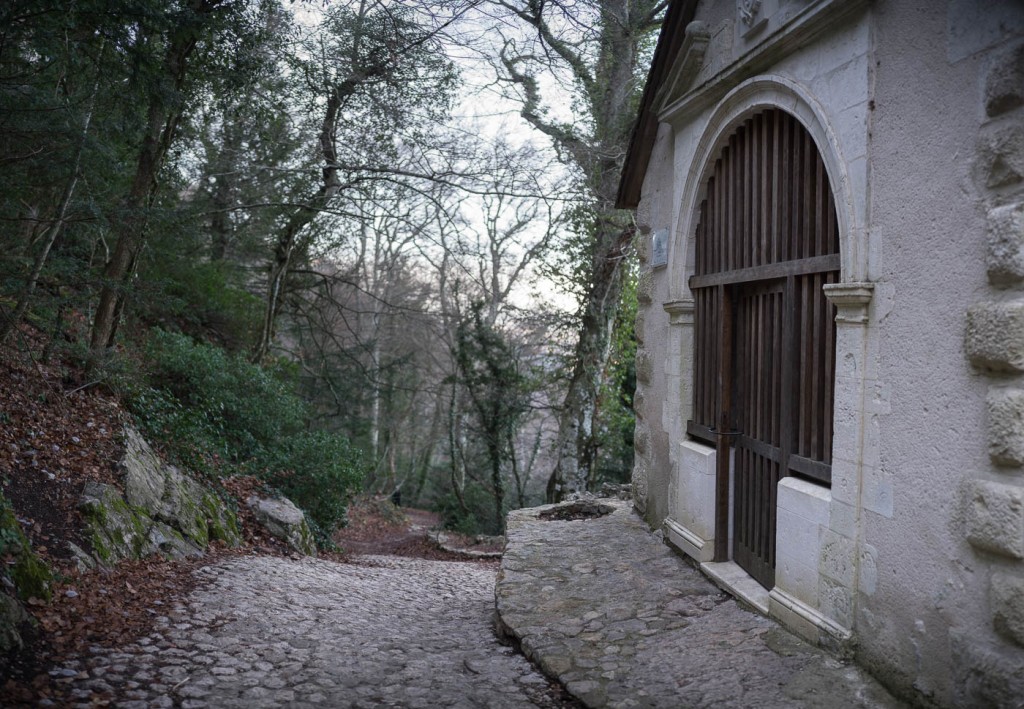 Chapel along the Stations of the Cross itinerary

To my best knowledge, the forest has never been used as a movie set, but its beauty is quite staggering when the light is right and the variety of photographic subjects is enough to keep a jaded tog happy for days. Arte Wolfe, Andreas Gursky, Sebastiao Salgado, all the styles are possible here. 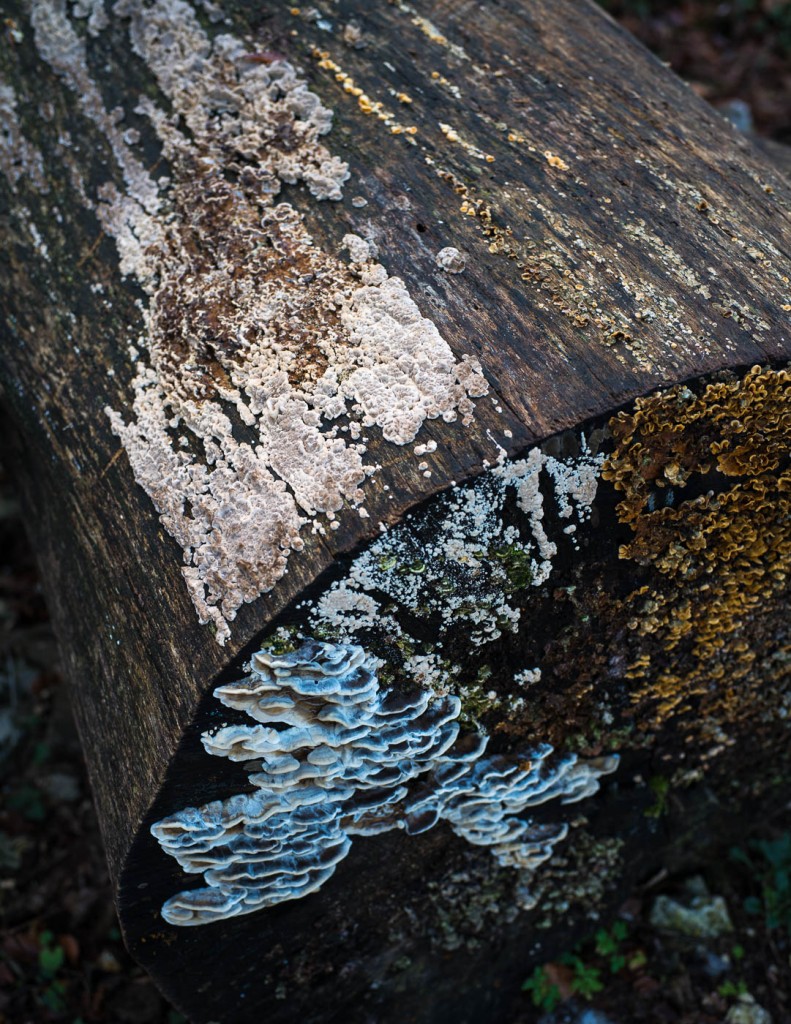 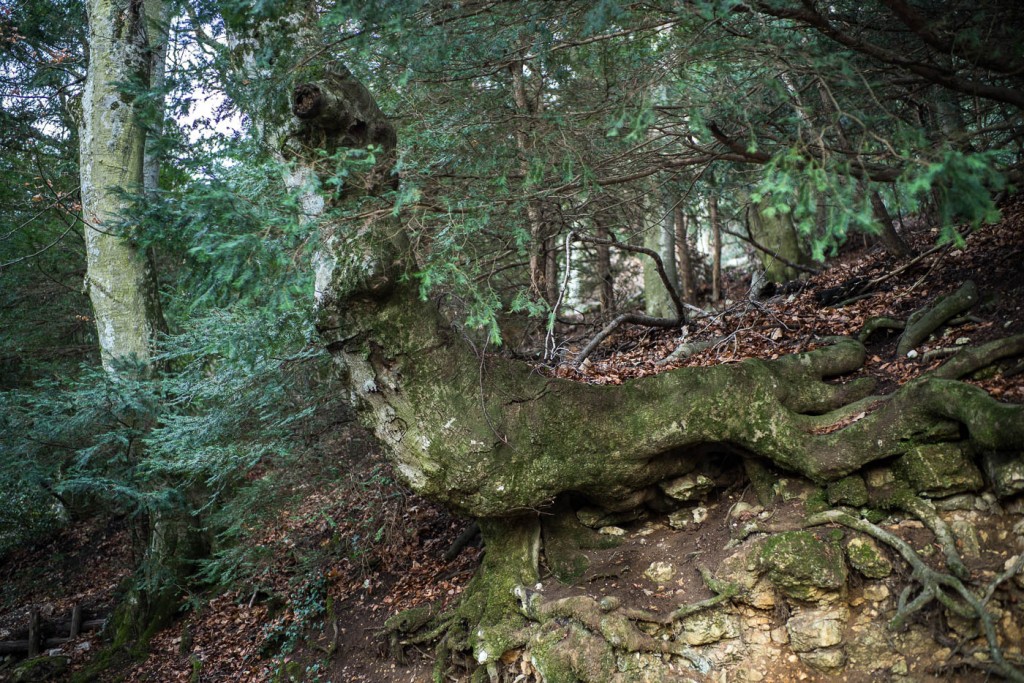 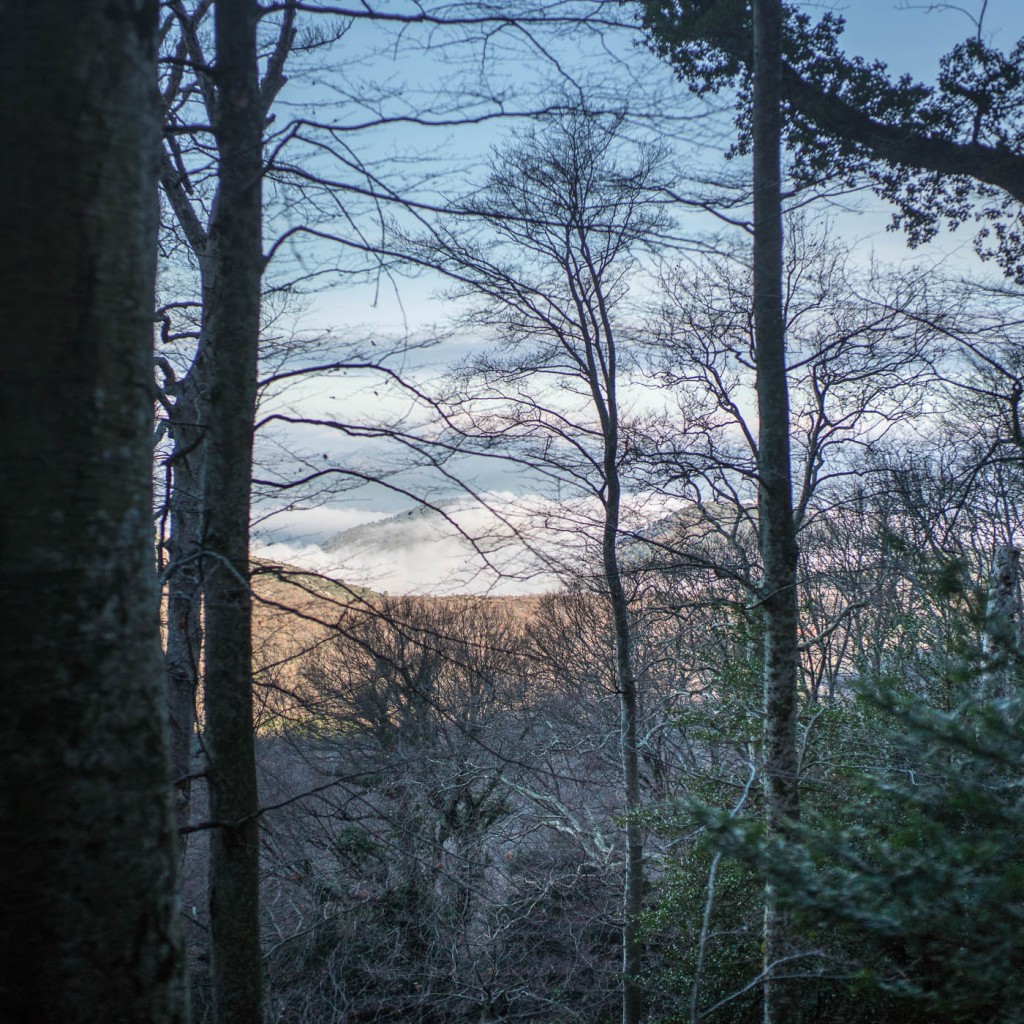 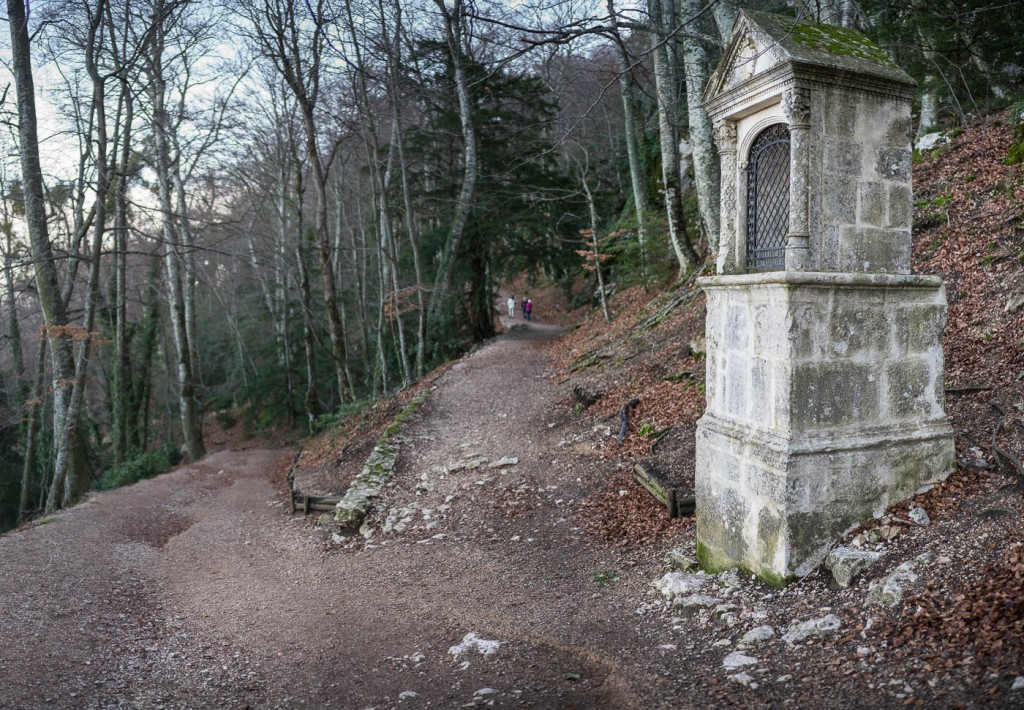 Station at the crossroads 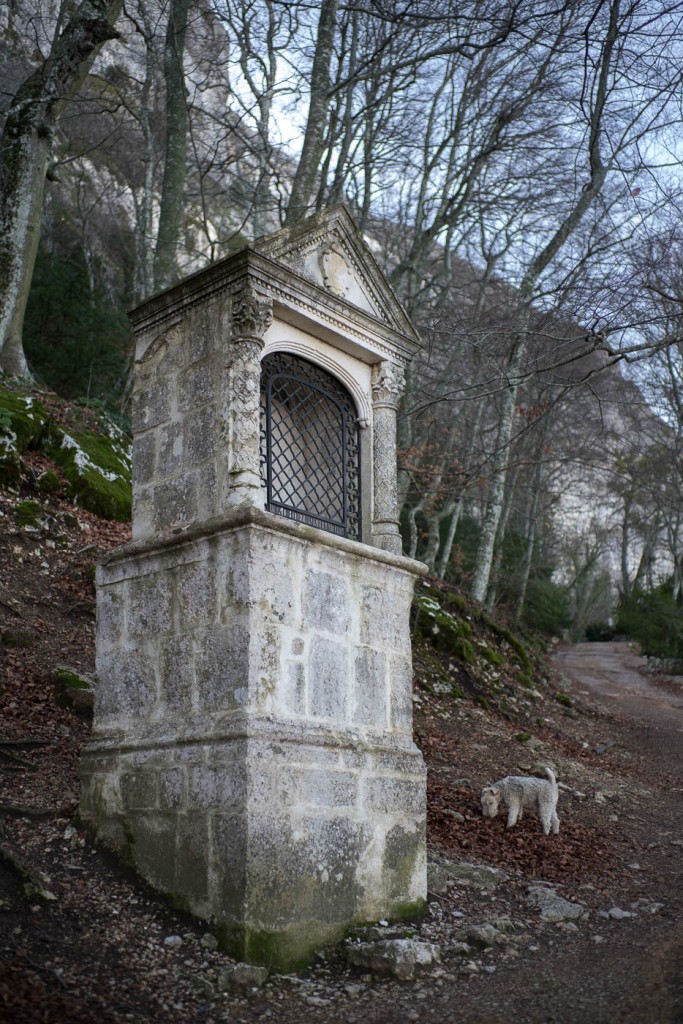 At a crossroads, one track takes you to the Mary Magdelene grotto chapel and the other to the top of the cliff where, eventually, you climb above the tree line, discovering the plains towards Aix-en-Provence on one side … 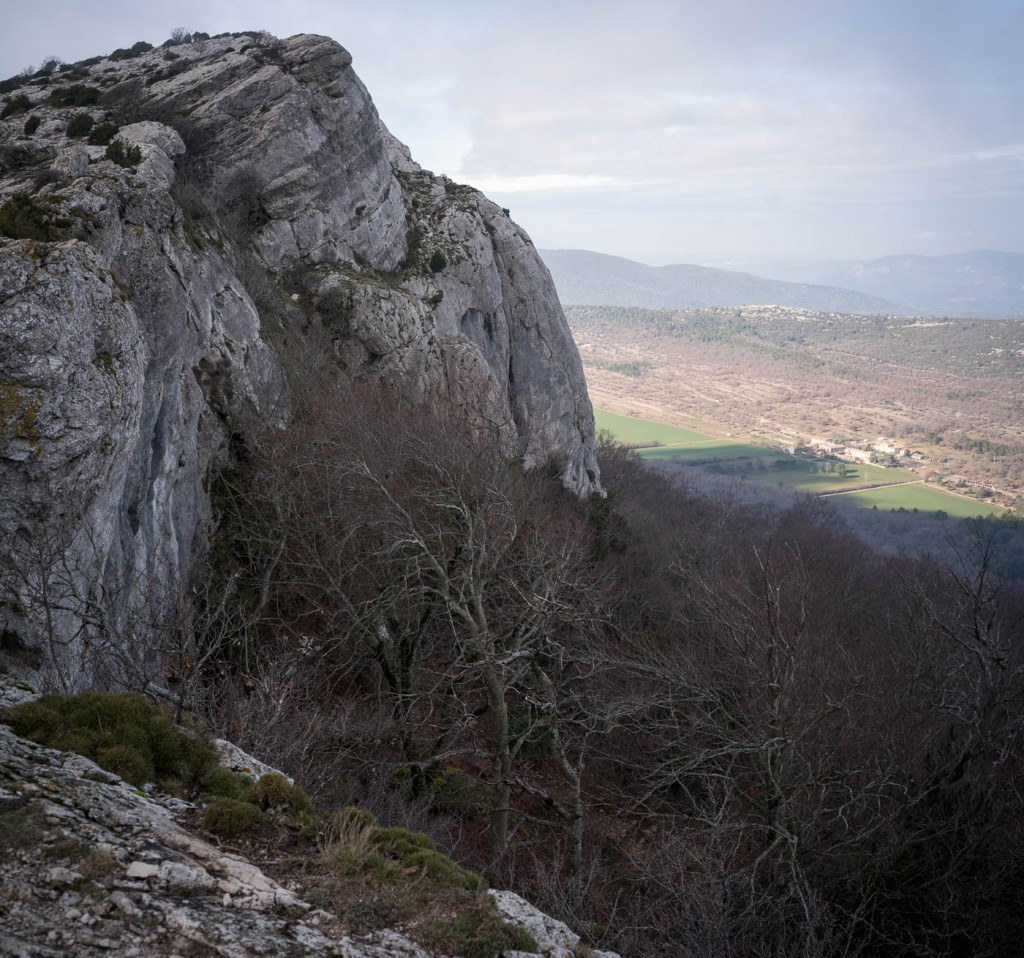 … and the mediterranean coast on the other.

At least when the clouds allow 🙂

The Sainte Baume massif plays a significant role in local weather, clouds often found on one side but not the other, or both, depending on the dominant winds and temperatures. In this abnormally warm and humid period, cloud cover abounded on both sides, providing endless fun for those (like me) who dig clouds 🙂 🙂 🙂 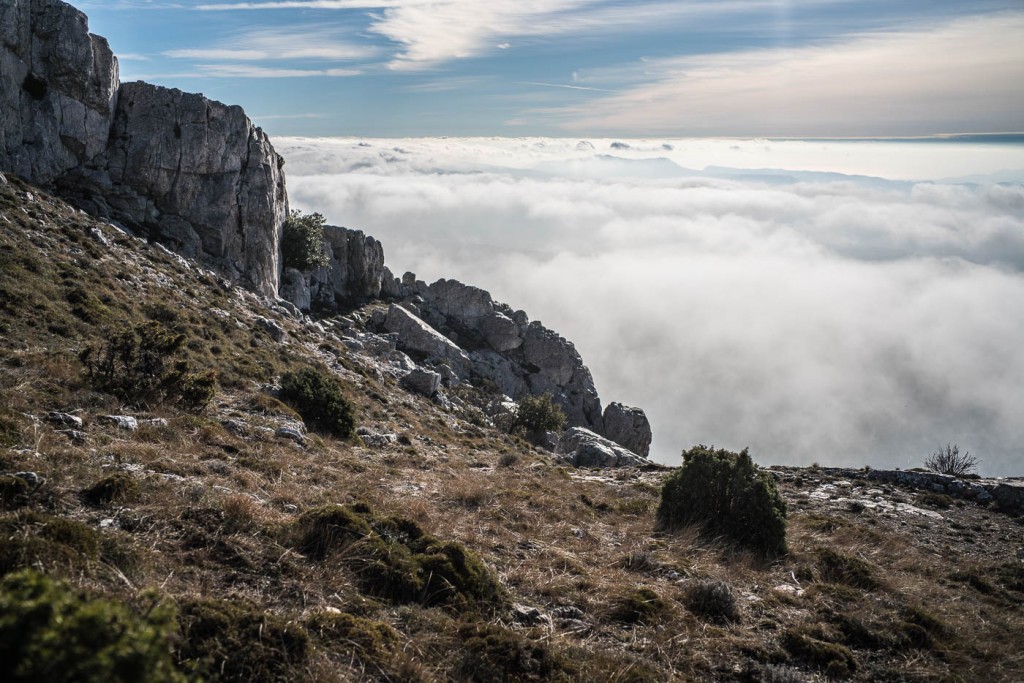 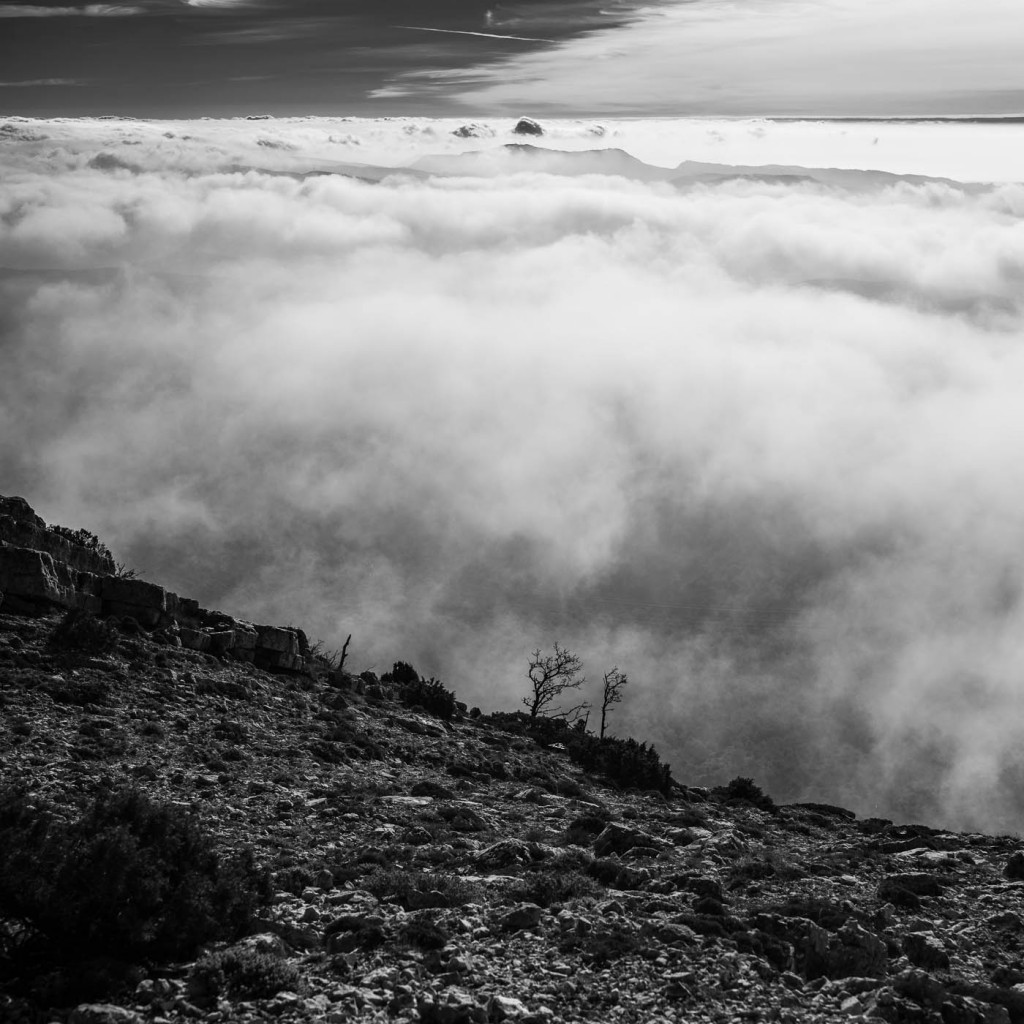 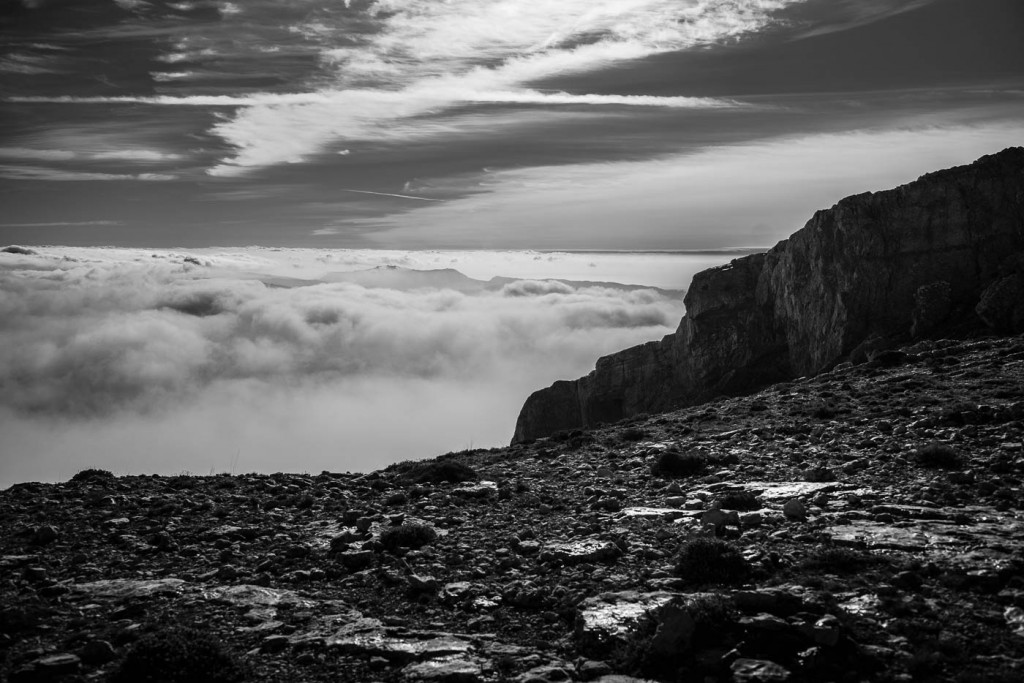 The hilltops you see emerging from the clouds in the above 3 photographs more or less mark the coast in local cities between La Ciotat and Toulon.

The Sainte Baume ridge, from which these pics are made, extends roughly 9 miles along an East-West line and rise to just under 4,000 feet (1146m to be precise).

Even along the ridge, the mystical and religious nature of the area is evident in many places where crosses and other symbols have been erected or engraved in the rock. 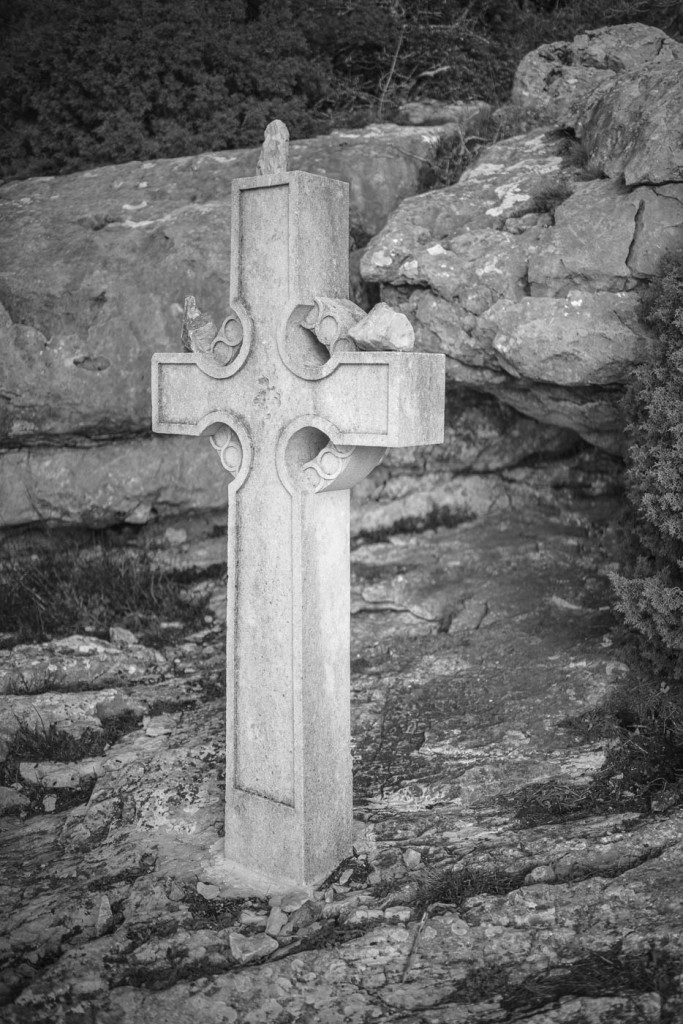 The area is unfortunately also treacherous, the easy-going track and mostly benign weather abruptly turning to deceptively dangerous hiking conditions with little or no warning.

The cross below was erected at the spot where an unfortunate Canon clung to life for 3 day and 4 nights before dying after a fall from the small cliff you see behind it. The rock is often extremely slippery. I fell heavily twice during that Jan 1st  walk and have already helped people with broken limbs down the cliff. 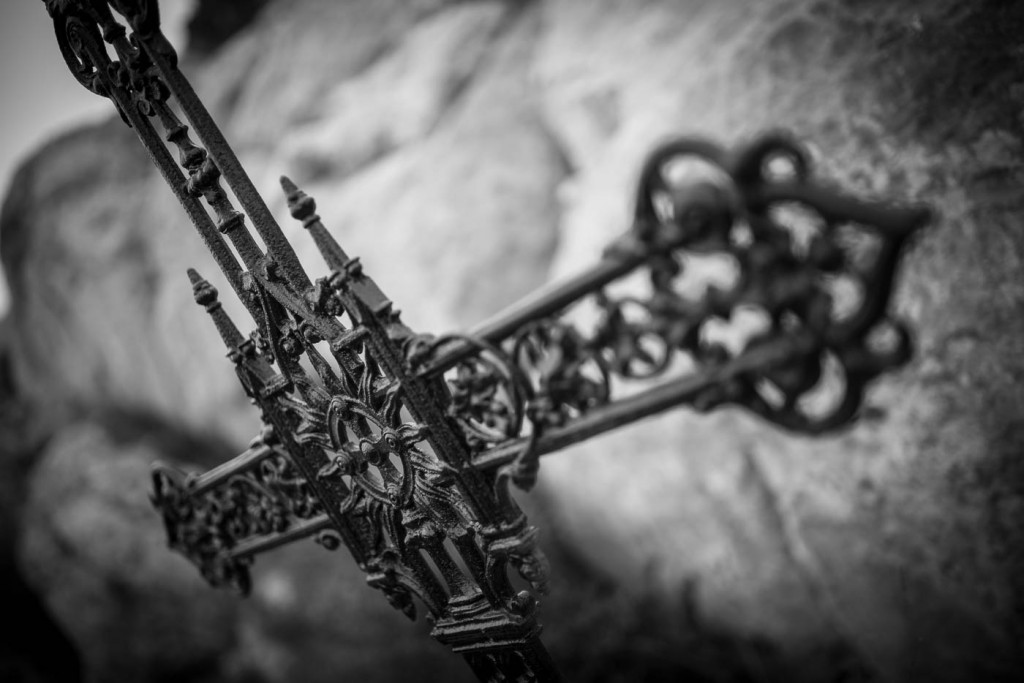 Even though of a far less dramatic nature, we too were soon to witness the sudden change of fate a mountain hike can bring about.

Mid-morning, the clouds to the South of Sainte-Baume started climbing along the gentle sun-bathed slopes and the wind slowly picked up. 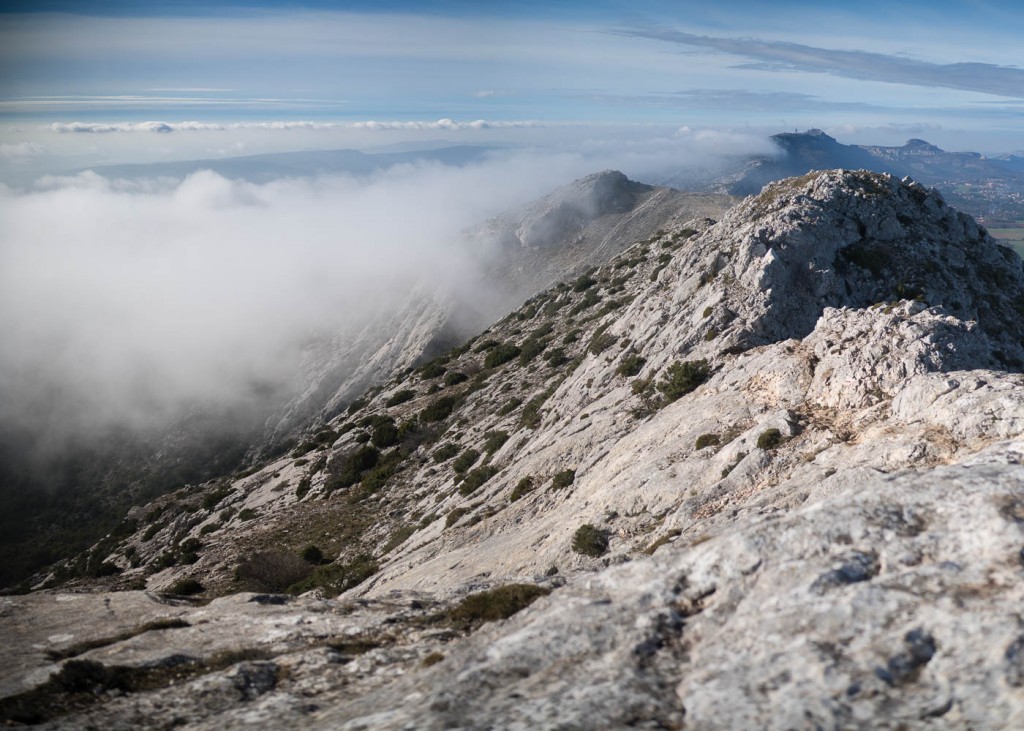 Clouds to the left of them

Clouds to the right of them 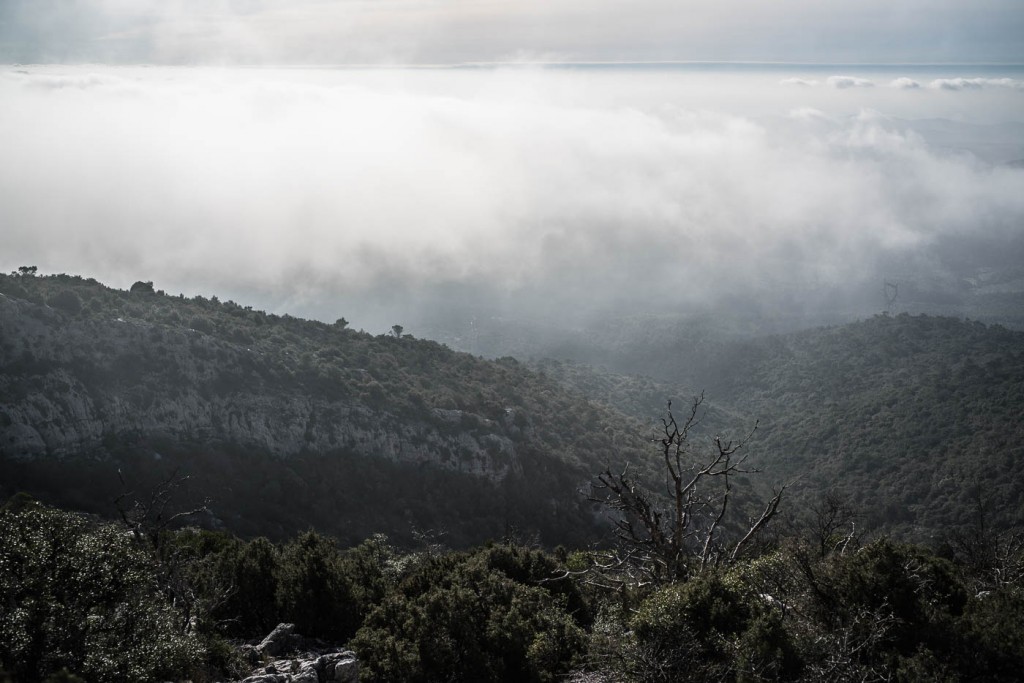 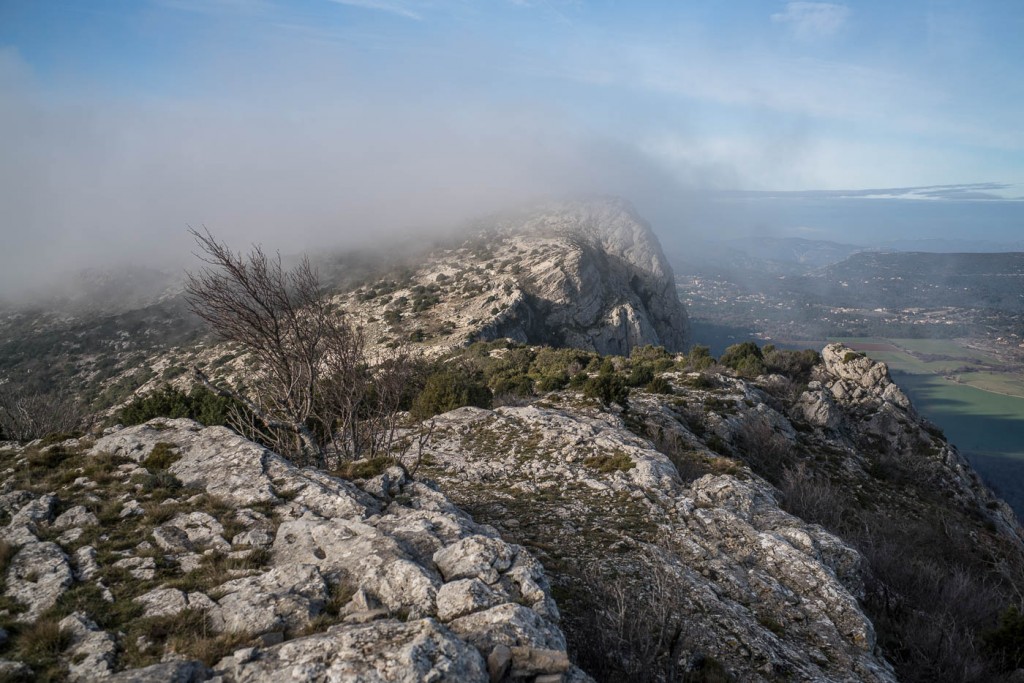 Within minutes, all trace of the sun had disappeared, temperatures dropped at least 10°C and the wind got quite strong. We’re always prepared for that sort of sudden storm and the heavy mountaineering jackets in the bag soon became a blessing that fellow hikers on the path looked at with bitter envy. 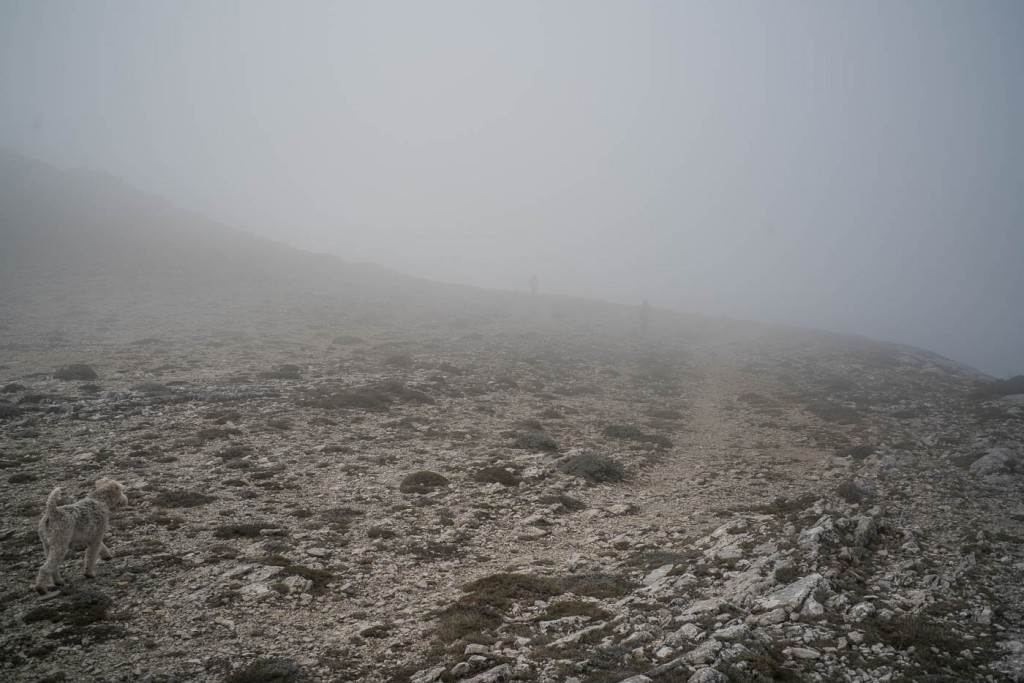 Although hard to convey in a photograph, the sight of wisps of cloud drifting around you at 40 mph, while you are kept warm by a heavy jacket and storm-proof hood is pure joy. Those are the best moments in life for me. They make you feel so alive, yet not fear for your safety. 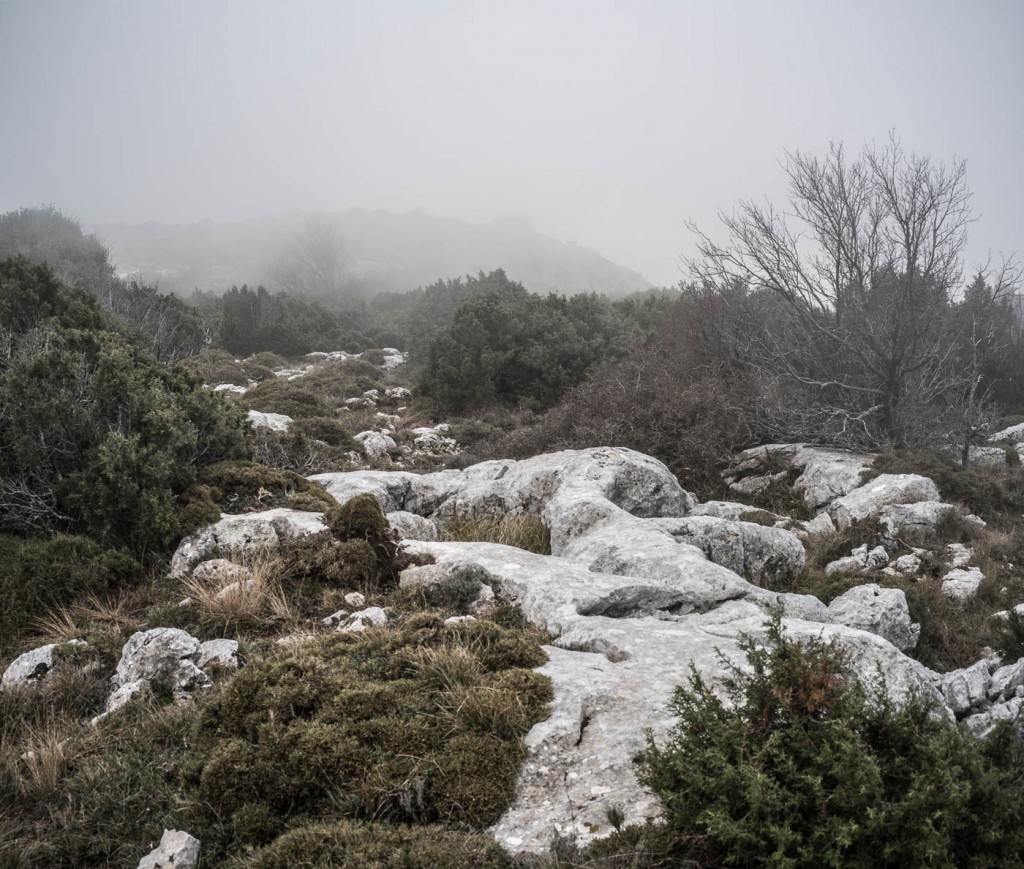 Head in the hood in the cloud 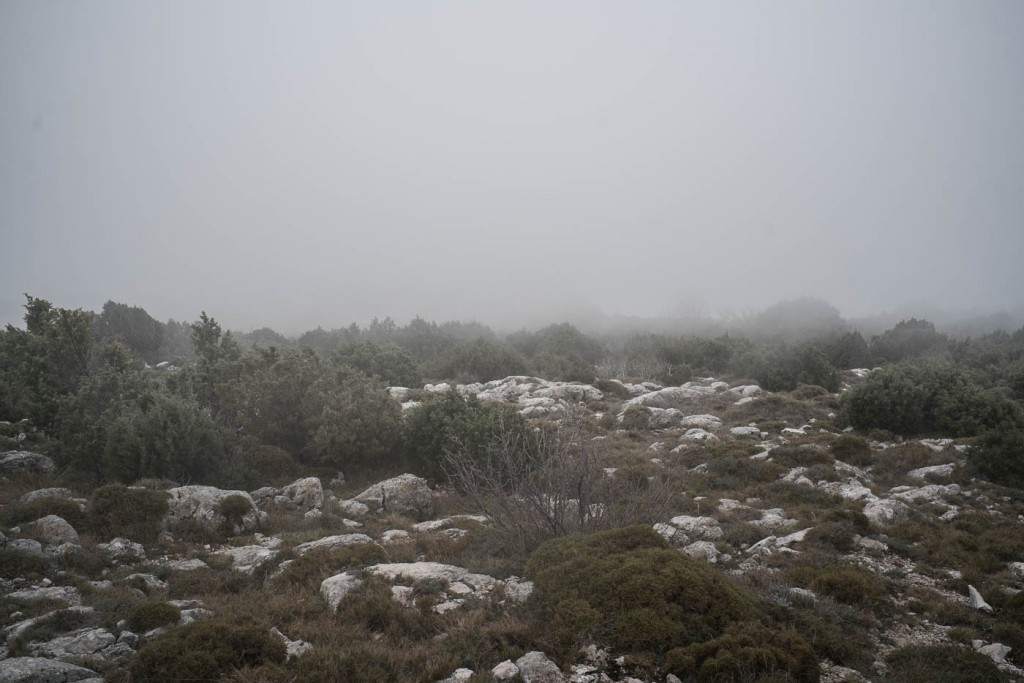 The cloud eventually subsided, leaving us with fantastic views on either side of the hill. 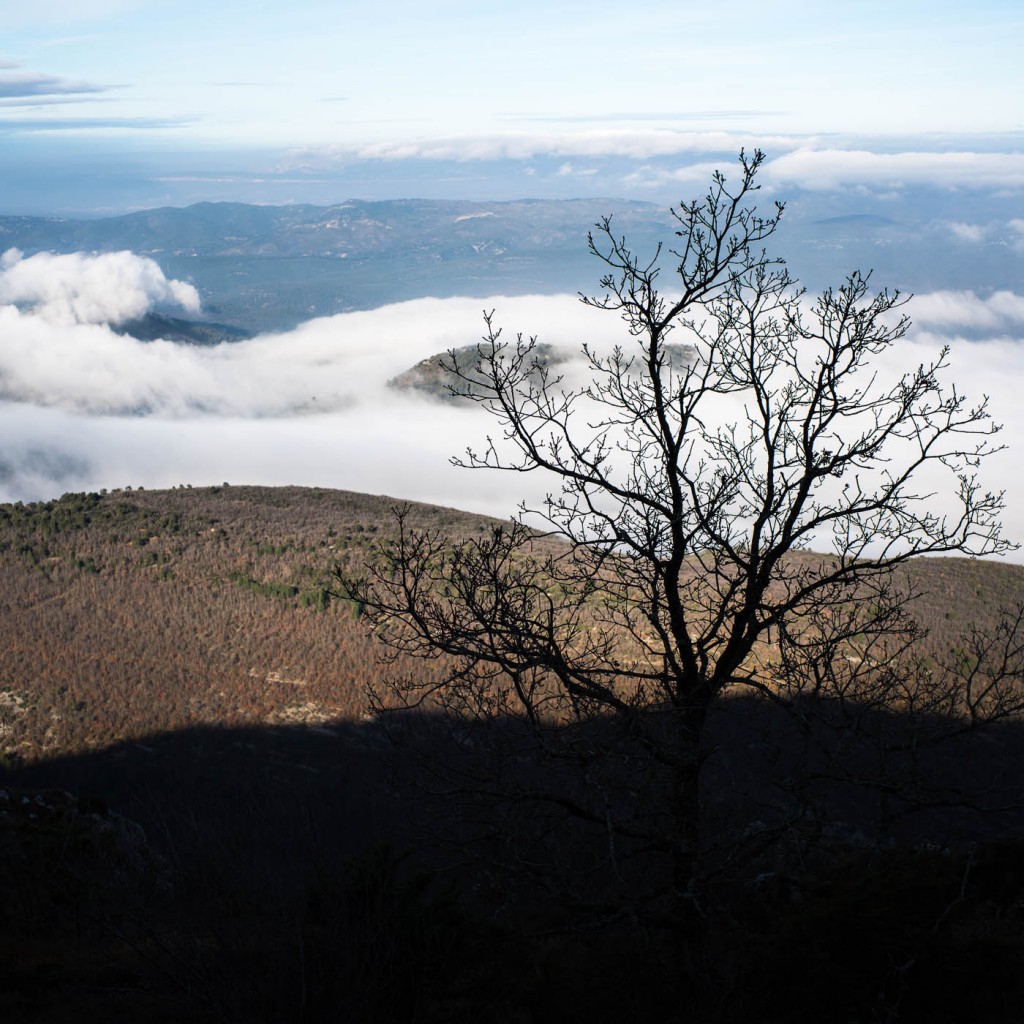 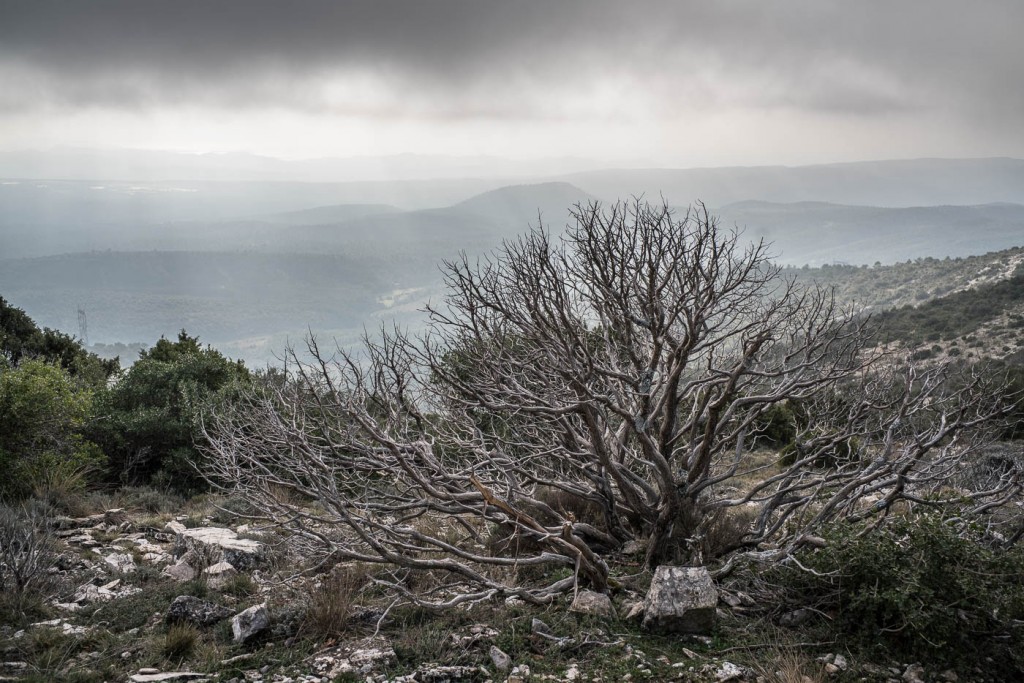 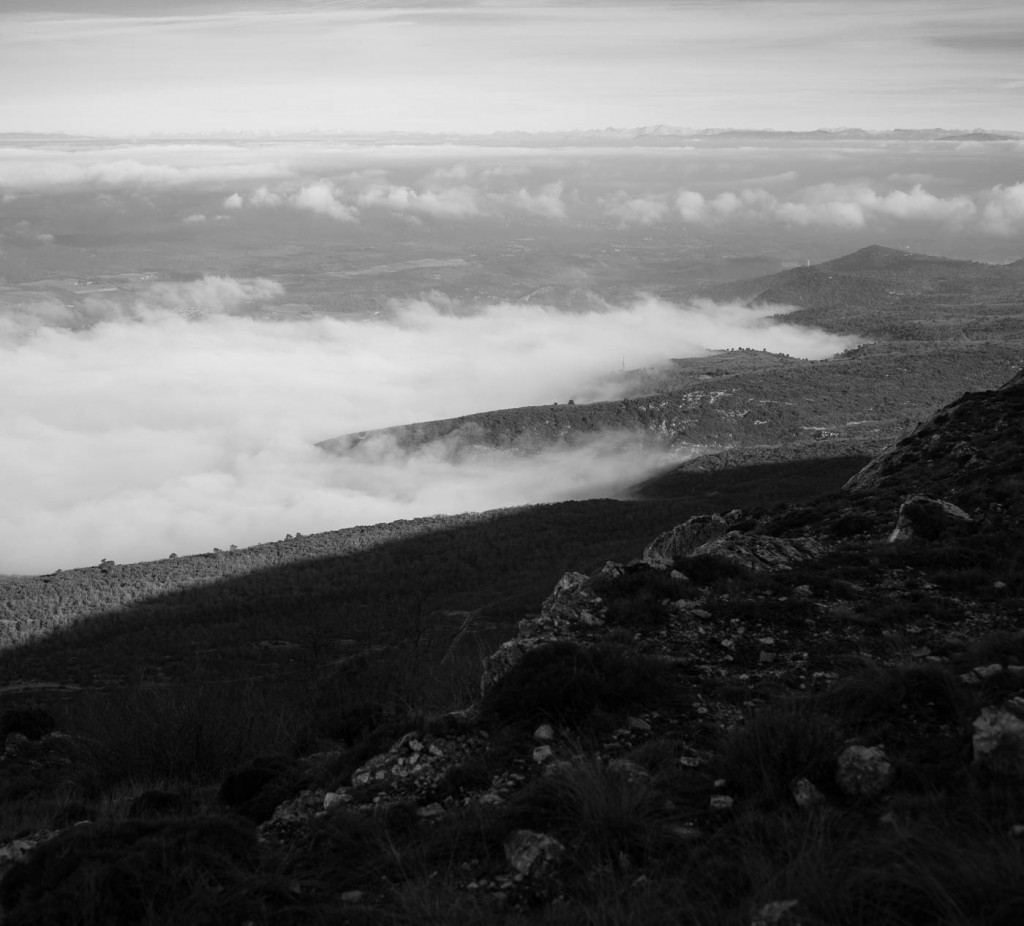 Multiple tracks lead down from the ridge to the plateau from which we started. All take you back into the stunning forest at the bottom of which multiple horizontal paths link the various car parks and the Hotellerie de la Sainte Baume, a dominican convent doubling as a lovely hotel-restaurant complex (seen lit up by the sun, 4 photographs above). 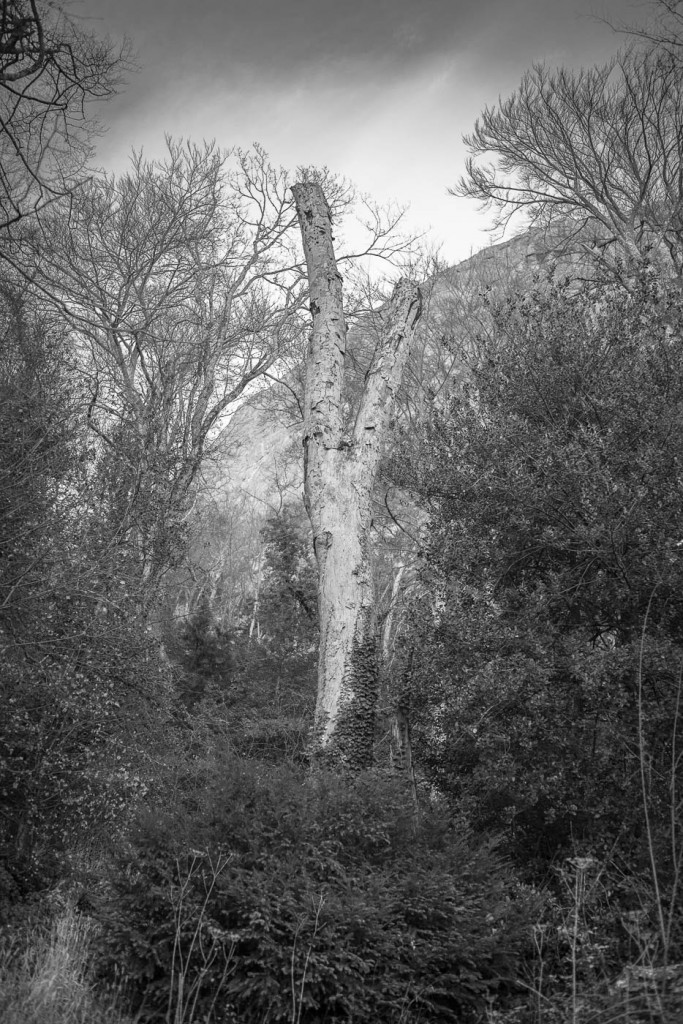 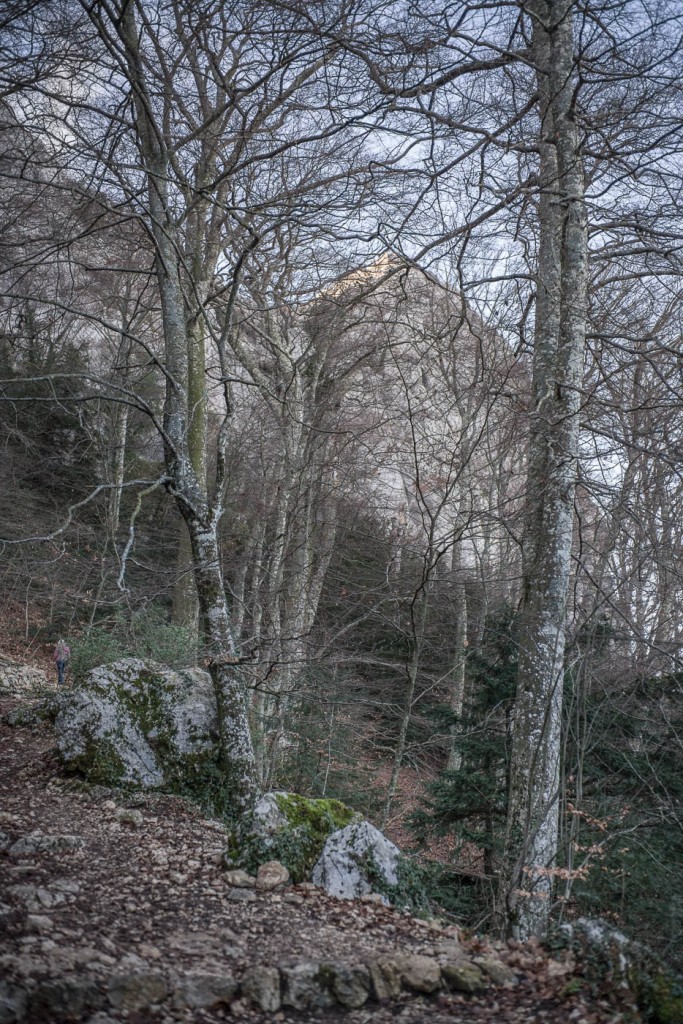 As usual, my account is a hodge podge of capture and processing styles destined to show you various types of results possible in the area. All were made using a Sony A7rII and Zeiss Distagon 1.4/35mm ZM, possibly the best hiking combo money can buy.

If you are ever in the area (roughly in between Aix-en-Provence and Marseilles), it is a highly recommended photographic stop. Summer week-enders will drive you nuts in their thousands, but in the morning and off-season, this really is photographer’s paradise. If you’re interested, here’s a map to plan your drive there. Highly DS recommended.

Have fun, be creative.