After the visit of Paul (Perton) in early June and our meeting up on the island of Skye in the Inner Hebrides, the question was where to go with another photographic buddy but this time in late November when the weather is likely to be variable to say the least and disruption to the wonderful Scottish ferry system a real possibility? 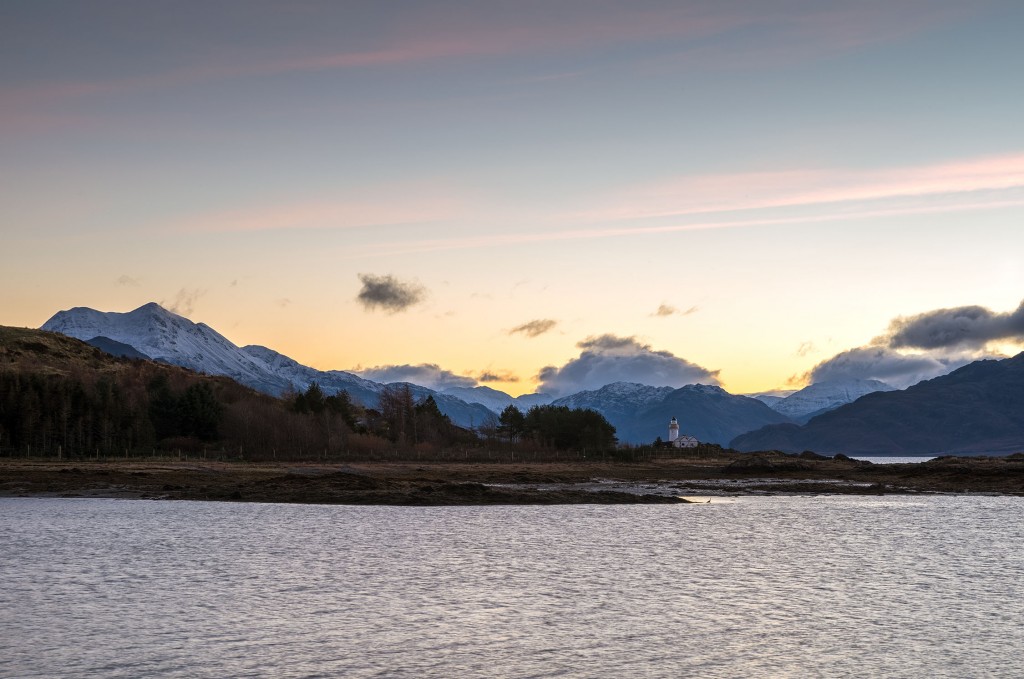 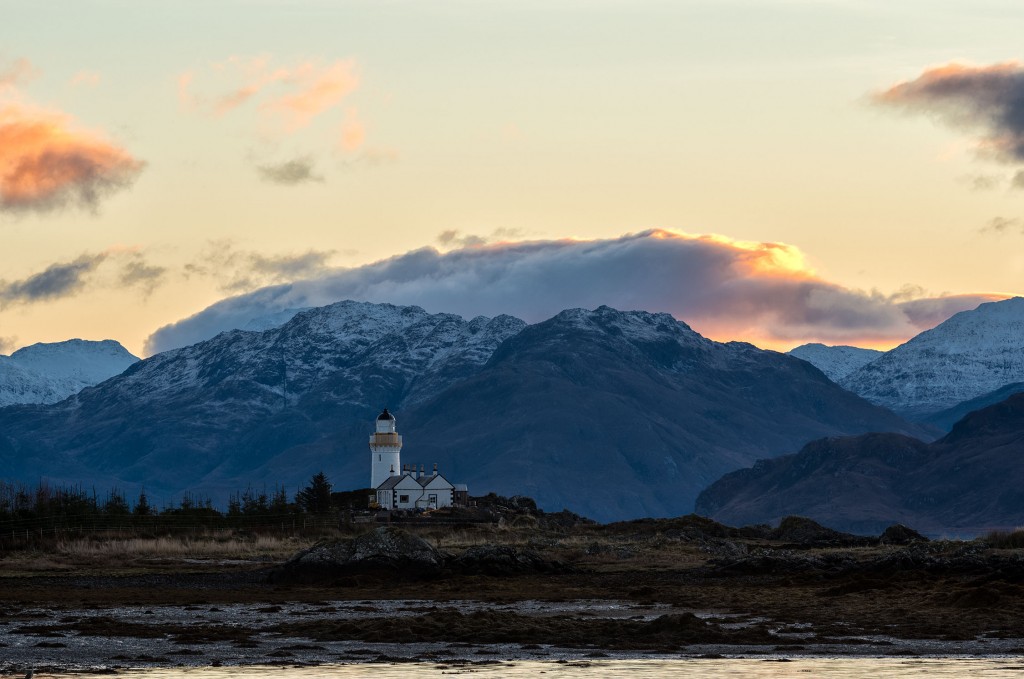 The answer was obvious – somewhere, shame on me considering my many trips to more distant places such as Iceland and the Faroe Islands, I’d visited only once before on a family holiday, despite knowing its reputation as a photographic destination and having seen some wonderful images taken there – the “Long Island” of Harris and Lewis in the Outer Hebrides. 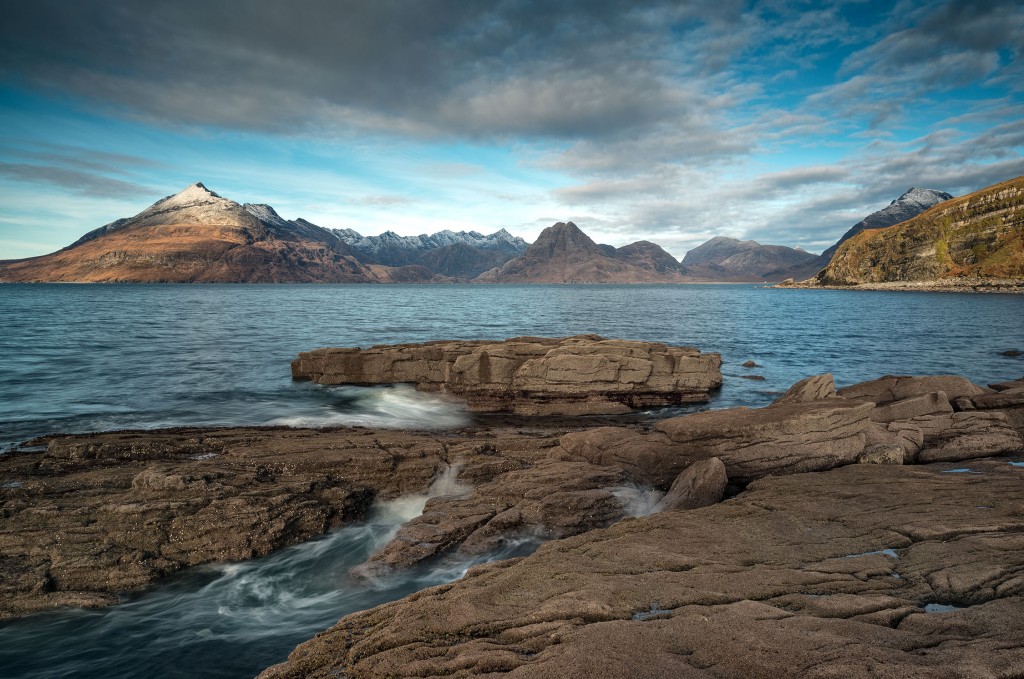 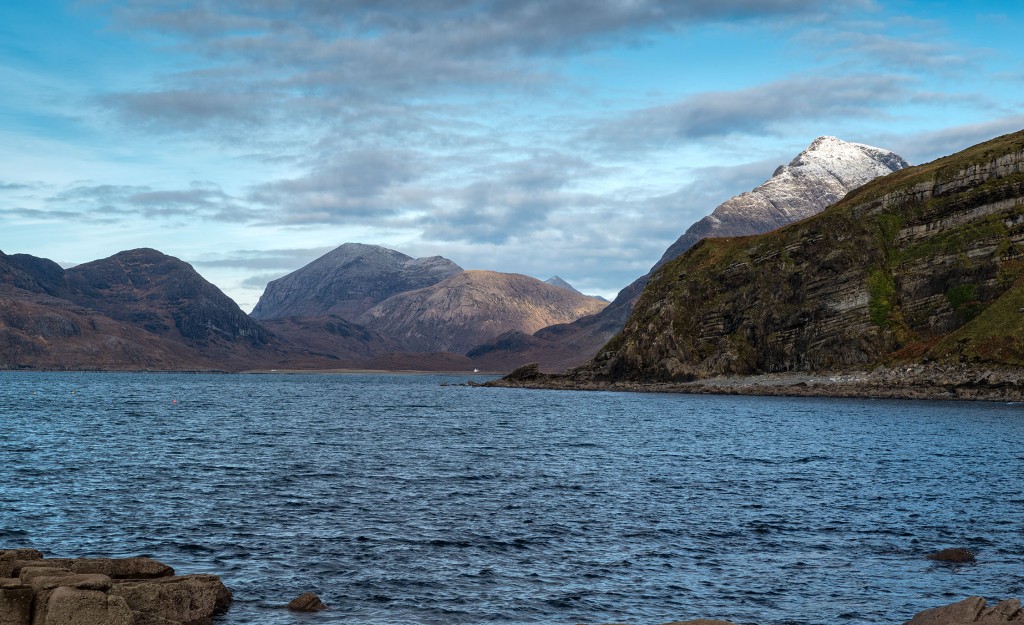 The risk of going there was all about the weather, not only for our photography but also from the travel perspective, especially as the shortest crossing is an 80 minute ferry ride from Uig on Skye across some of the wildest water Scotland has to offer – not the place to be stranded in the throes of winter. But, on the other hand and with, for me, an uncustomary “glass half full” attitude, if the weather were changeable, the opportunities for dramatic images should be plentiful. 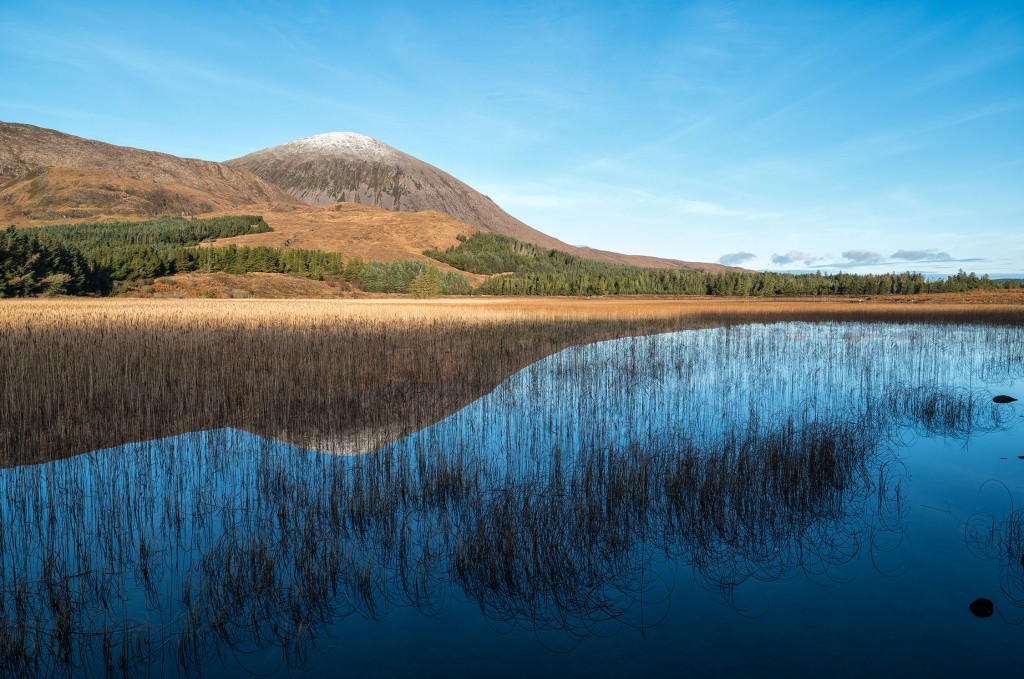 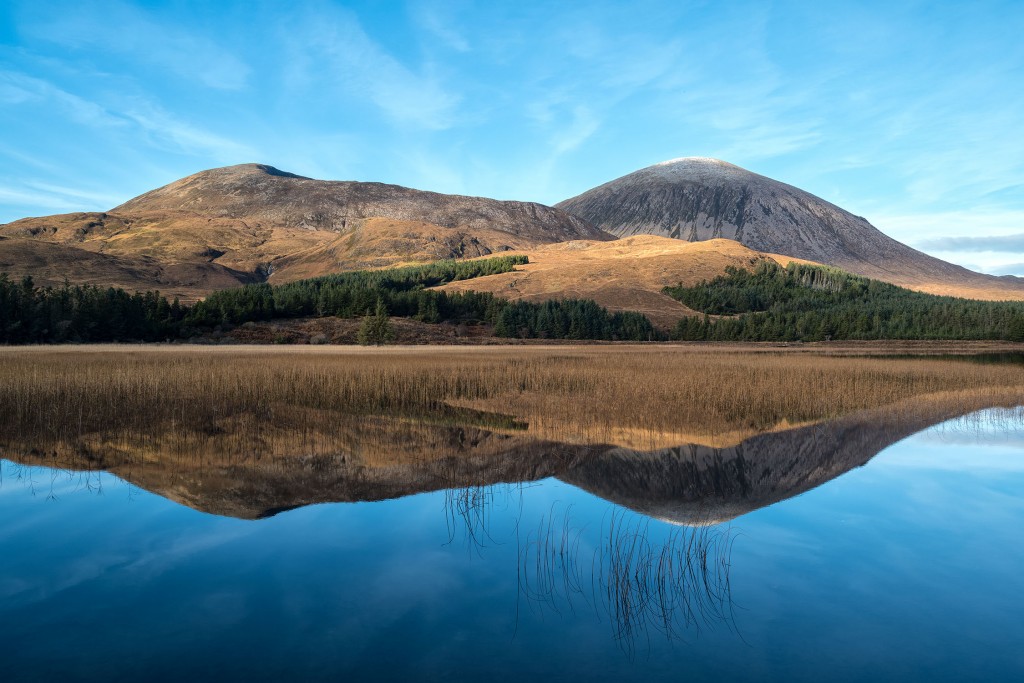 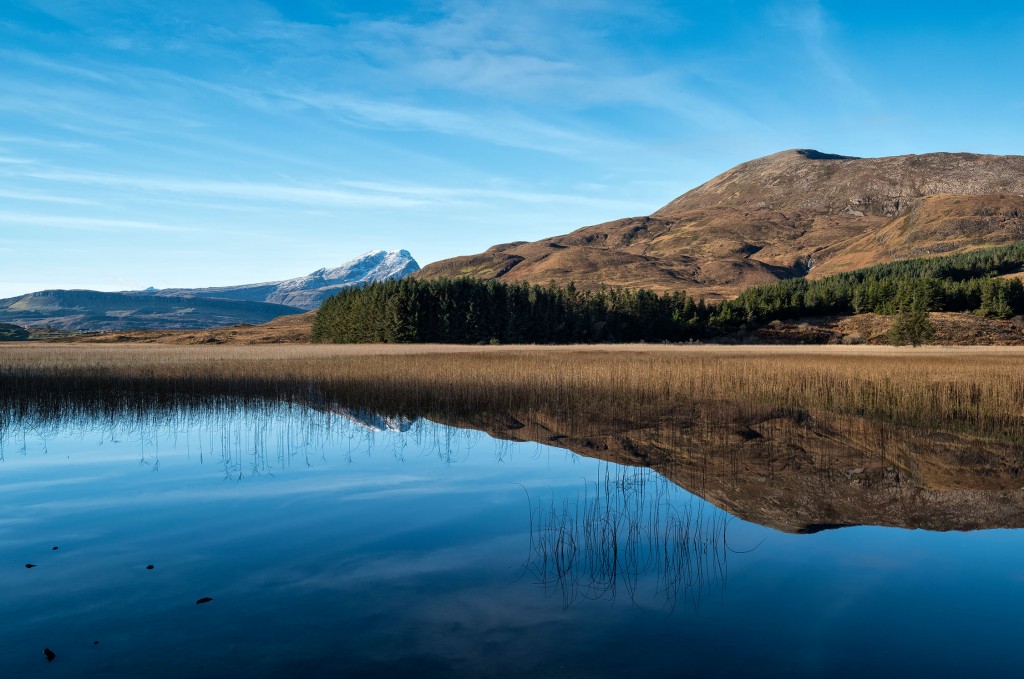 Mind made up, I devised a schedule – 3 days on Skye, staying in the south of the island where Paul and I had stayed in June, and 3 days on Harris, staying in the main settlement, Tarbert, situated strategically on the strip of land which joins South and North Harris and where the ferry arrives. 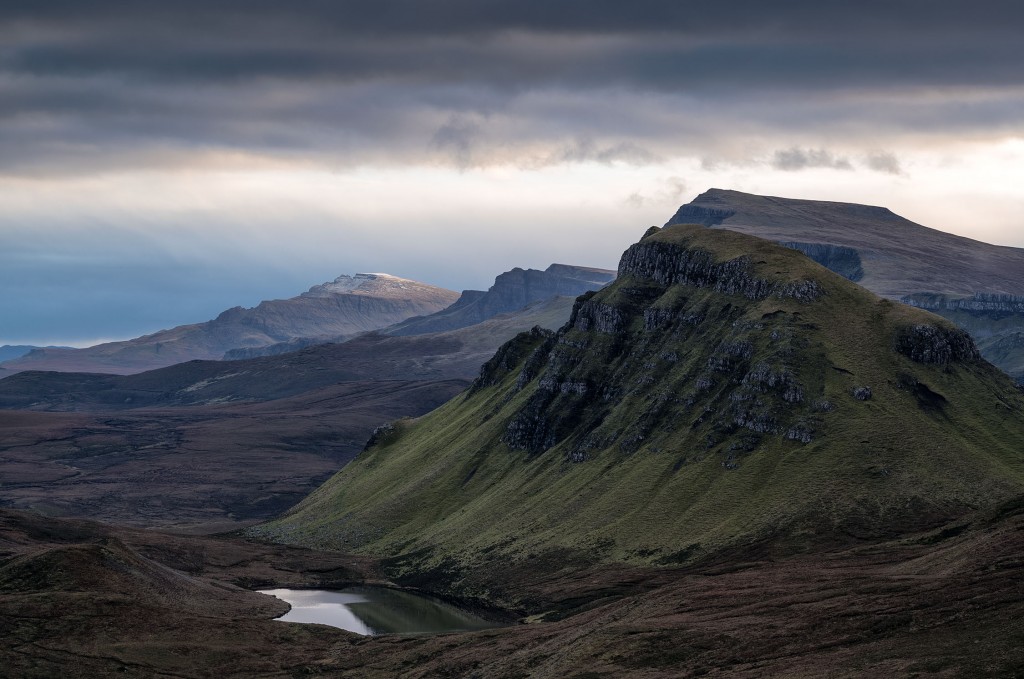 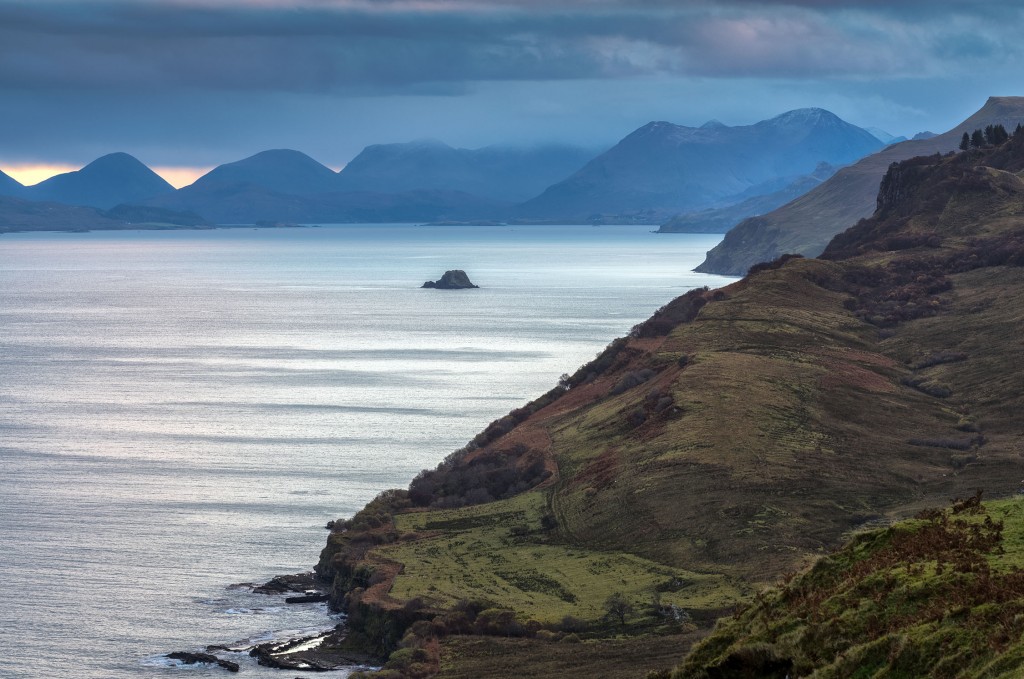 Skye needs no introduction as it is an iconic photographic and mountaineering destination and many photographic workshops take place there every year, organized and run by businesses and individuals from around the World, not only from Britain. As a result, the places to photograph are well documented, if perhaps a bit too obvious and clichéd as a result, and some might say that Skye is now in danger, as is Iceland, of being “overdone” and that it is simply a question, in many locations, of looking for the tripod marks to ensure the composition is “perfect” which, to many, unfortunately and not wishing to sound patronising, is synonymous with what has been done before. 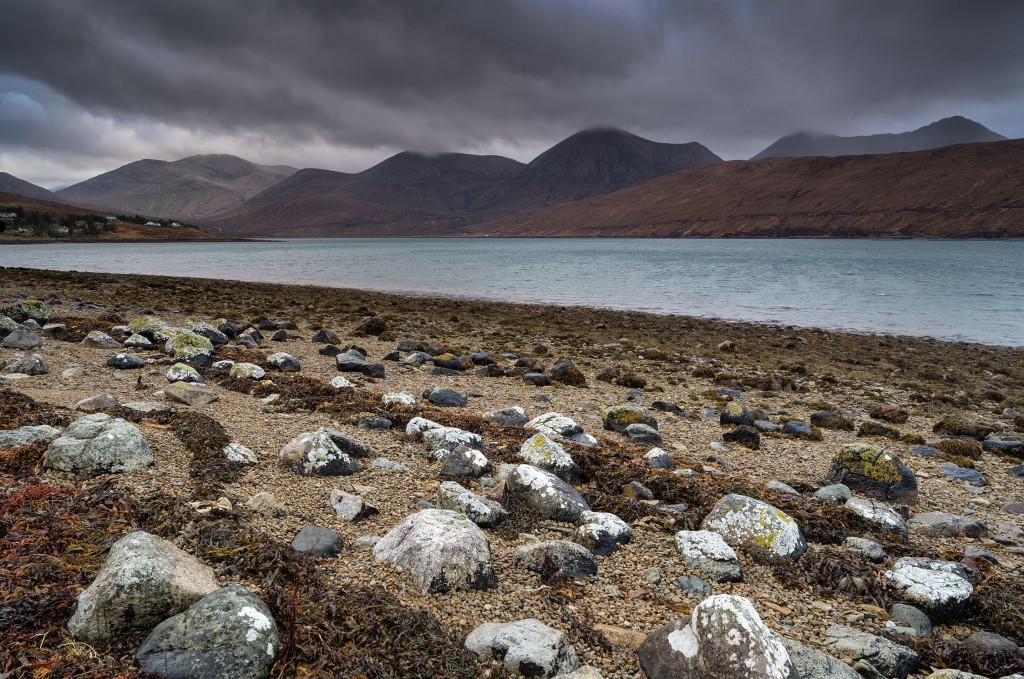 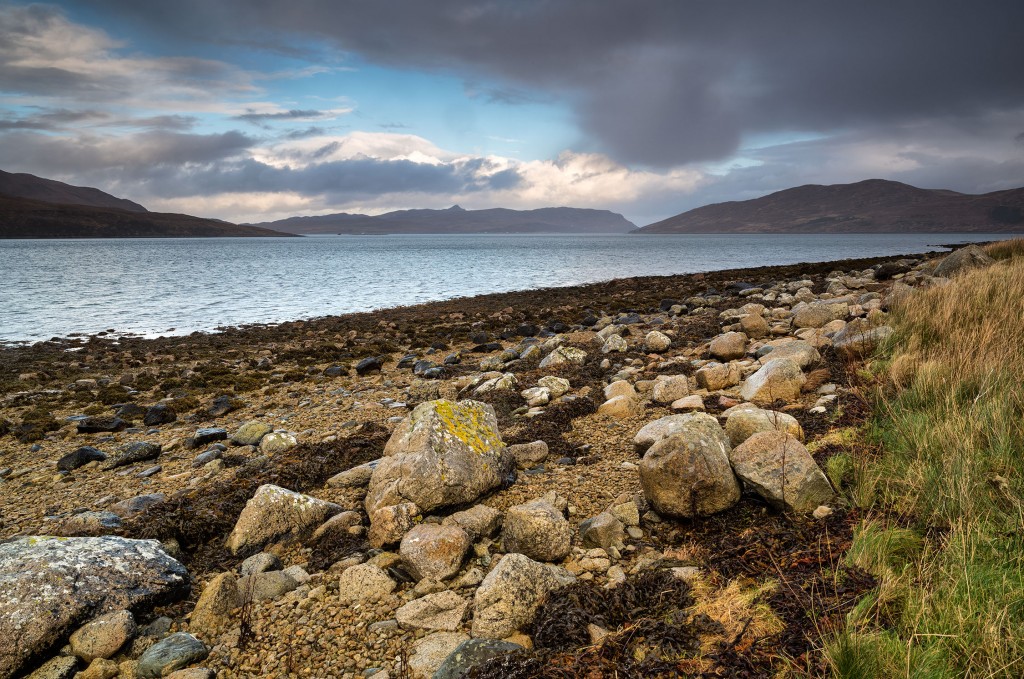 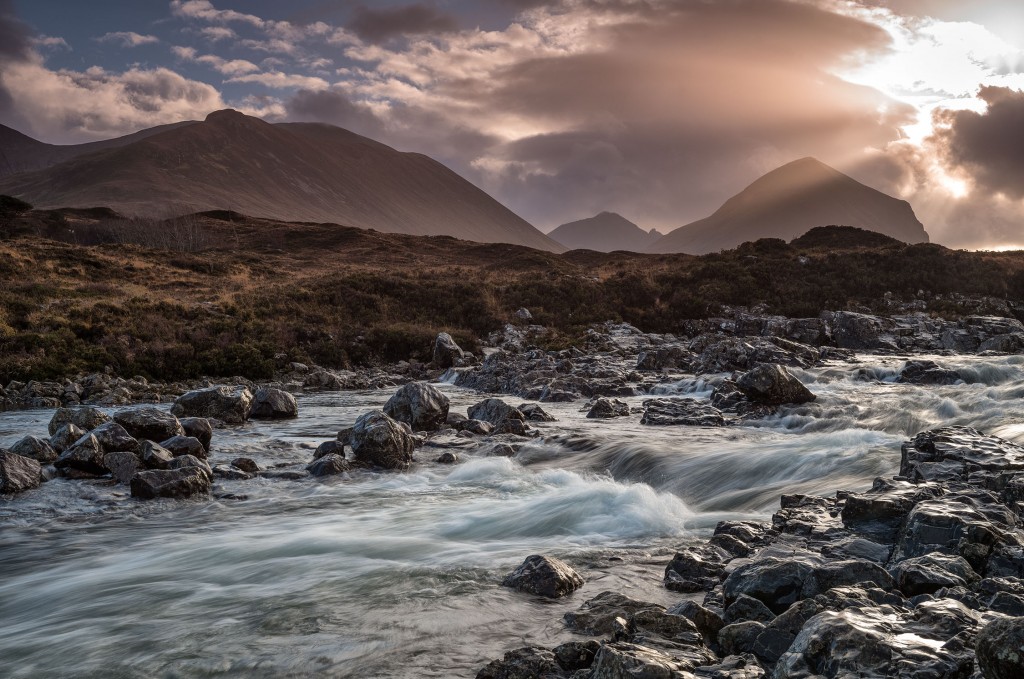 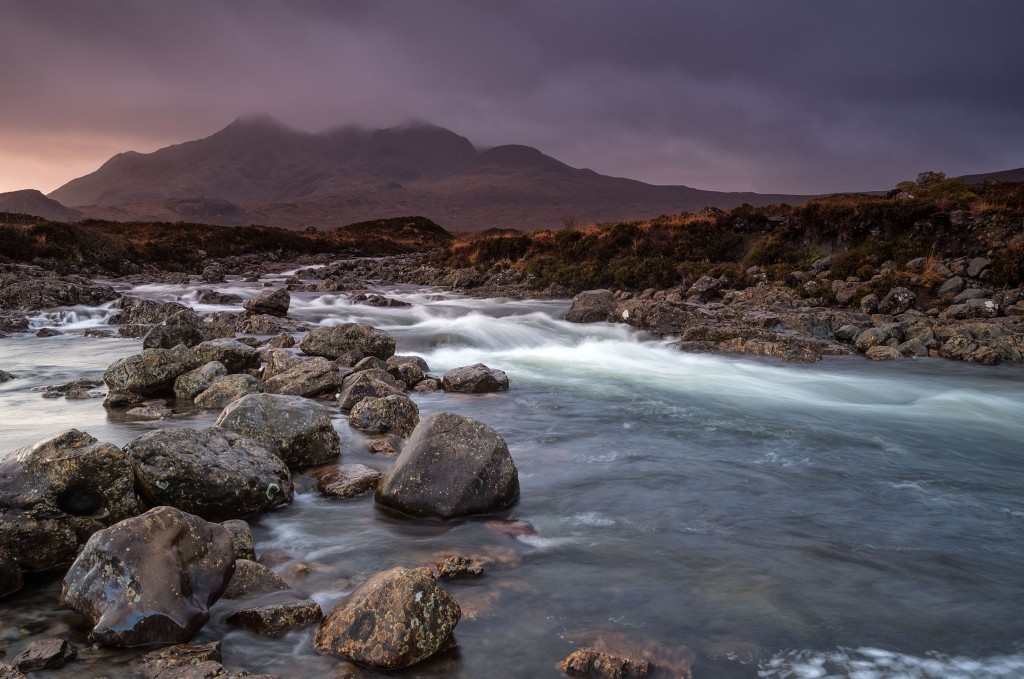 Harris and Lewis are somewhat different and, although the beaches of South Harris are reasonably well photographed, there are few tripod marks to aid the composition and the remainder of the island is, to a large extent, virgin territory which is what I was looking for as it would allow me indulge my “foreplay” enjoyment of planning the itinerary carefully, by reference to the detailed 1:25,000 Ordnance Survey maps, the tide times and the Photographer’s Ephemeris, to hopefully capture some fresh and different images – that was the plan anyway, always assuming that the weather played some kind of ball. 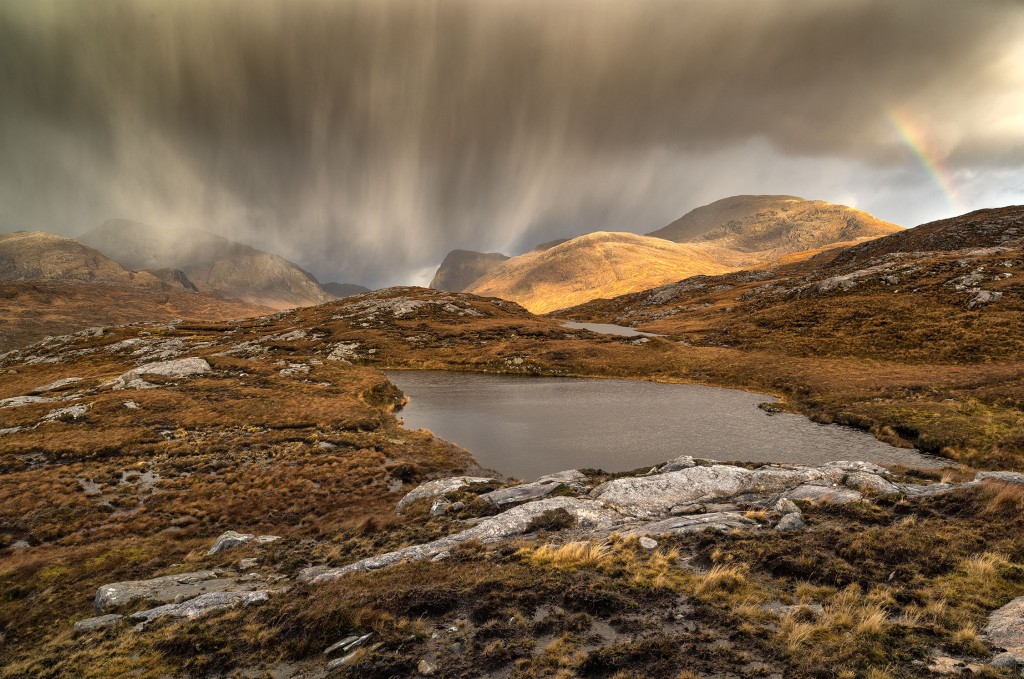 The kit for me would be my Leica S (typ 007) system, as opposed to my Sony A7r2 system. Much as I love the relative compact and lightweight nature of the Sony, and appreciate that, given the better lenses for that system, its image quality gives very little away to that of the Leica, the rugged nature of the Leica and its extreme weatherproofing (I would trust it in the bath, never mind the shower), given the type of weather anticipated, made its choice automatic. The added benefits would be its excellent GPS capability and dual card slots which are, to my mind, two important, missing features which Sony needs to address in future iterations of the FE mount. More of the camera equipment later on in this article. 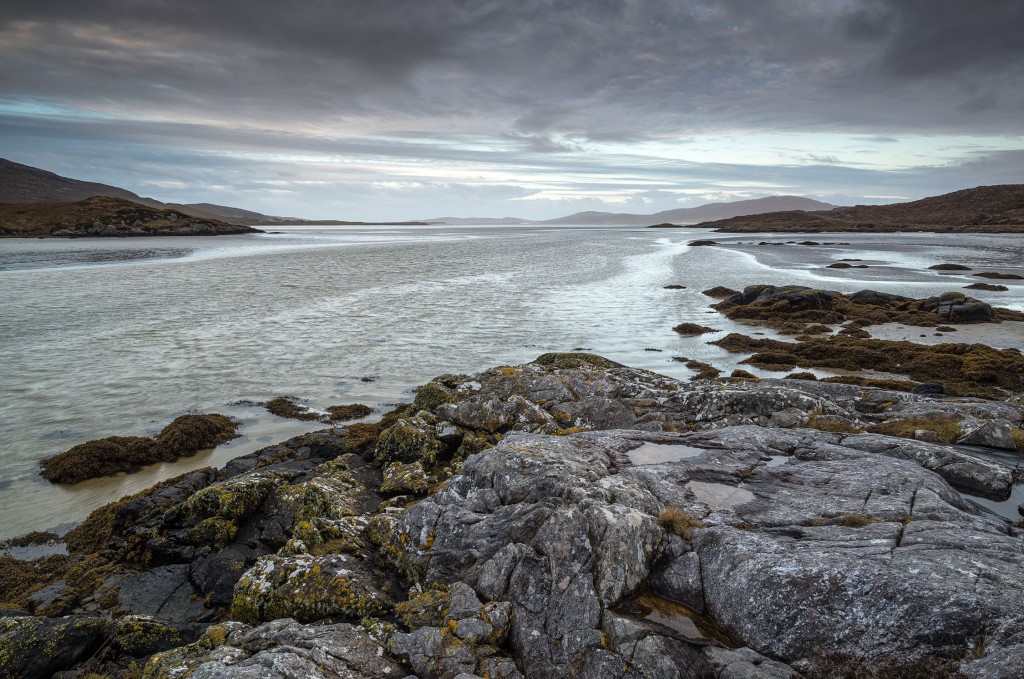 The plan was to collect my buddy at Glasgow Airport around noon on the Saturday and take a leisurely 4 to 5 hour drive to Skye through some of mainland Scotland’s most iconic scenery – along Loch Lomond, through Glencoe, across the mountains from Invergarry to the head of Loch Cluanie, down Glen Shiel to Loch Duich and Eilean Donan castle and over the bridge to Skye where our hotel on the Sleat Peninsula was only a 15 minute drive away.

As our national bard famously wrote, however, “….the best laid plans of mice and men….”…!!! My buddy’s plane was delayed leaving Sydney which meant that he missed his Dubai connection and didn’t arrive at Glasgow until 7pm that day. Despite the prospect of the drive north in the dark being totally unappealing, given the weather conditions and the, as transpired, likelihood of encountering herds of deer on or by the side of the road, the positive weather forecast for the following day was such that there was no real choice and we arrived at our destination shortly before one in the morning. The things one does to feed this addiction called photography..!! 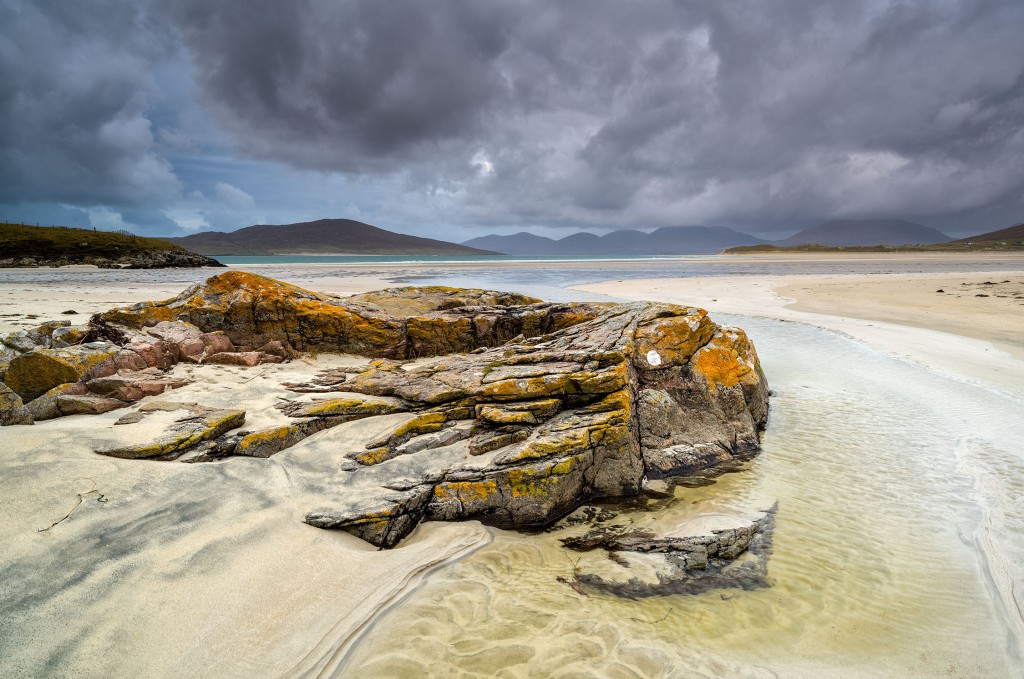 South Harris – Gneiss Outcrop, the Island of Taransay and the Mountains of North Harris from Traigh Sheileboist (c) Bob Hamilton

Our time on Skye saw almost the full spectrum of weather which ranged from being, ironically, too favourable to a mixture of horizontal rain and sleet where even leaving the safe confines of the car was a thought. We travelled the length and breadth of the island several times and, on the worst of the days, fortunately had the option of a wee visit to the Talisker whisky distillery for the guided tour and a sample of the amber nectar produced there. On the more favourable days, Skye lived up to expectations and we took some reasonable and representative images of the island, from the rocky beach at Elgol looking over Loch Scavaig to the remote bothy at Camasunary overshadowed by the Cuillin mountains, to the landslip geology of the Quiraing and the Storr. 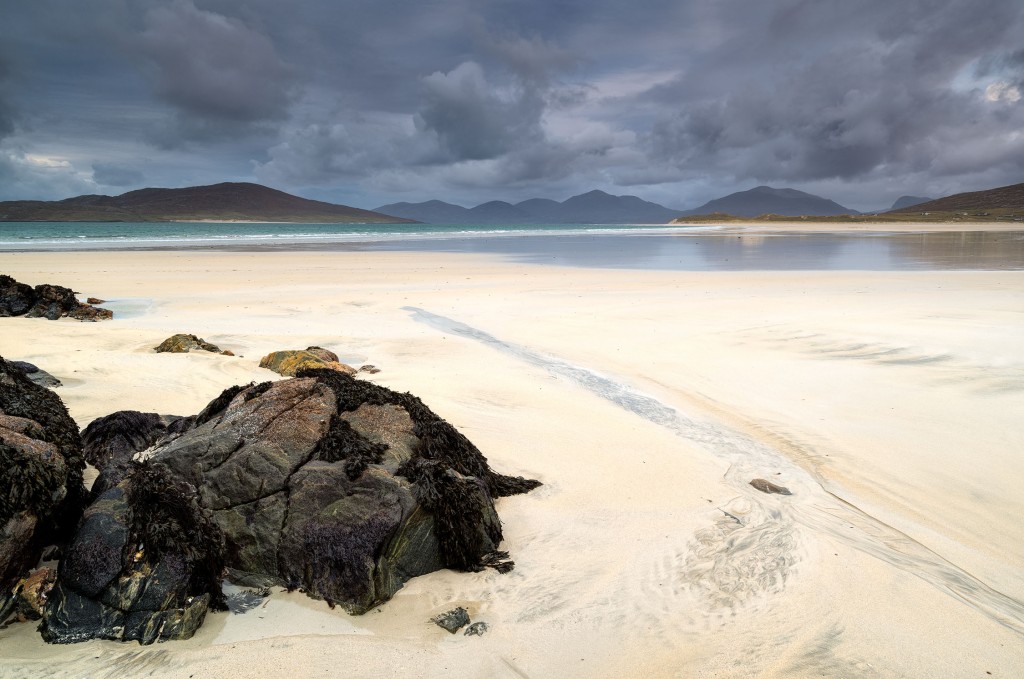 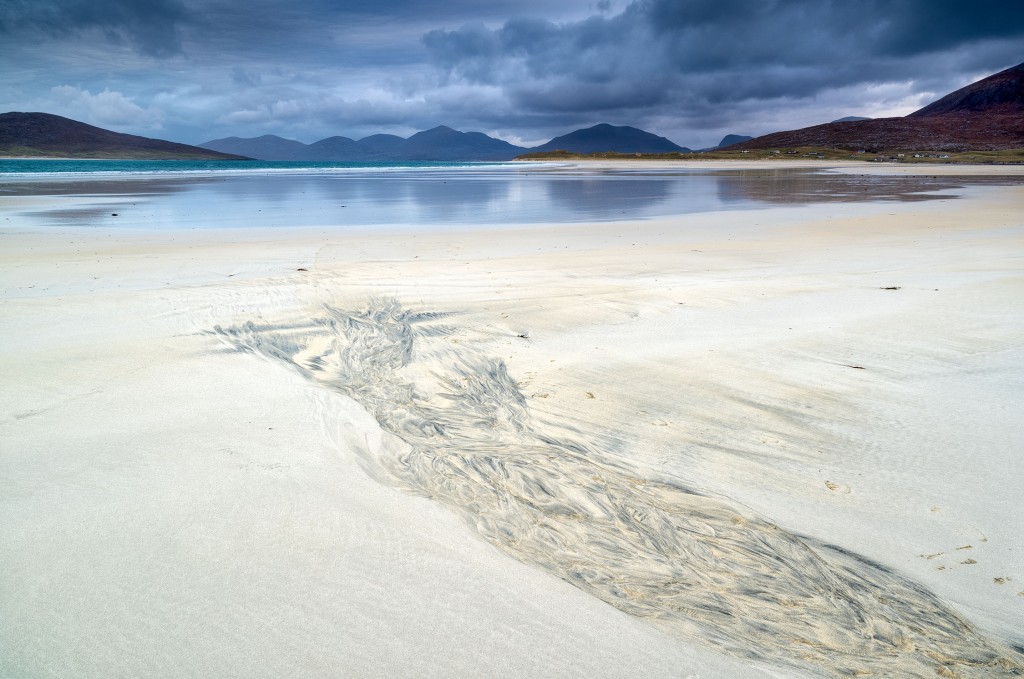 Harris was, as anticipated, completely different and, to my eyes, in many respects, preferable, perhaps because I had never really been there before and, to my mind, it is good to go somewhere new to test the vision to produce something from the unfamiliar. I am no expert in such matters, but the geology of Harris appears to be substantially different to that found on Skye and, in many places, one gets the impression that the ground has been laid completely bare and that the bones of the earth are sticking through in the form of regular outcrops of granite rocks and slabs. 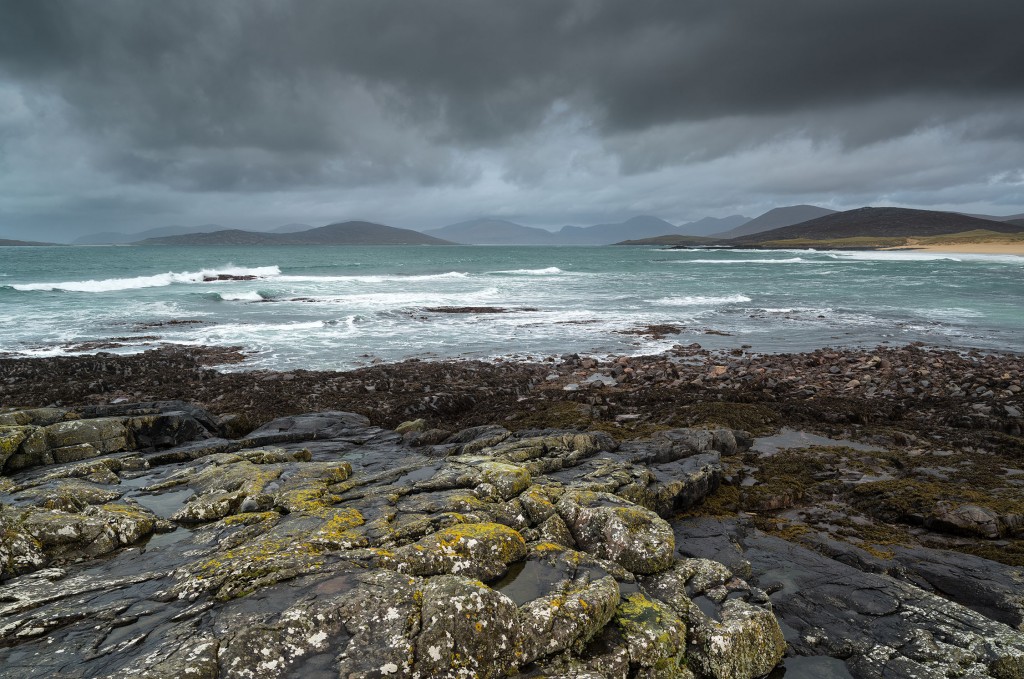 The beaches of South Harris are spectacular and, if one ignores the temperature and the wind, one can almost imagine being on a Caribbean beach – miles of golden sands and turquoise coloured water – with, however, the intrusion of outcrops of rocks composed mainly of banded gneiss, varying in colour from black to white and pink. Imagine the view, looking north from one of these beaches, across such a rocky outcrop in the foreground, across the golden sandy beach, to the turquoise water beyond and on to the craggy gneiss and granite mountains of North Harris in the distance which rise straight from the sea to a height of over 2,500 feet – a landscape photographer’s paradise..!! 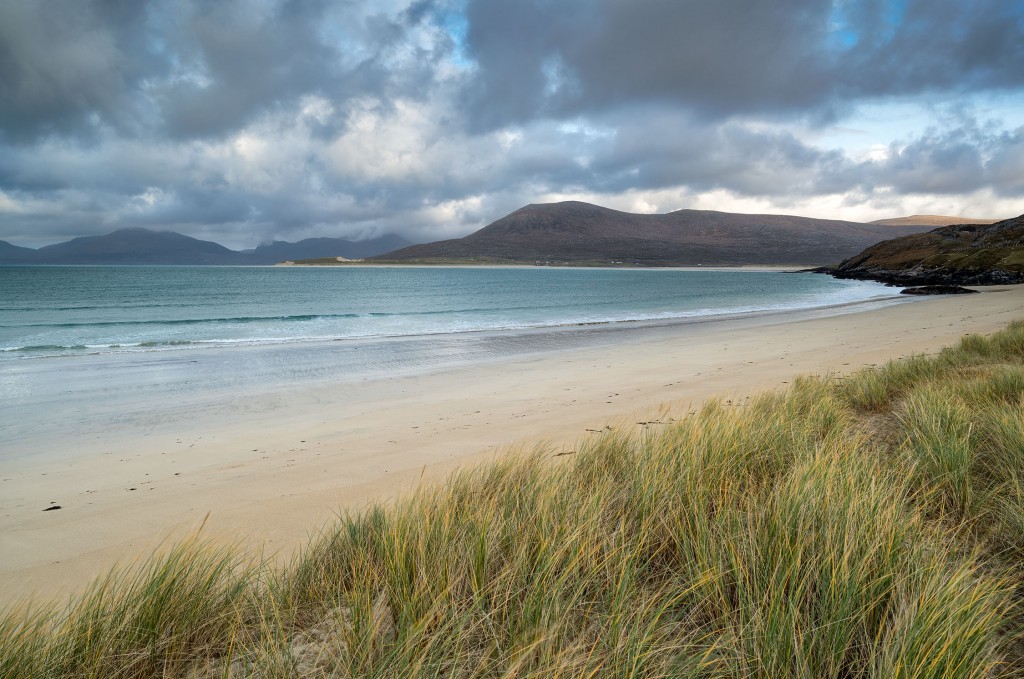 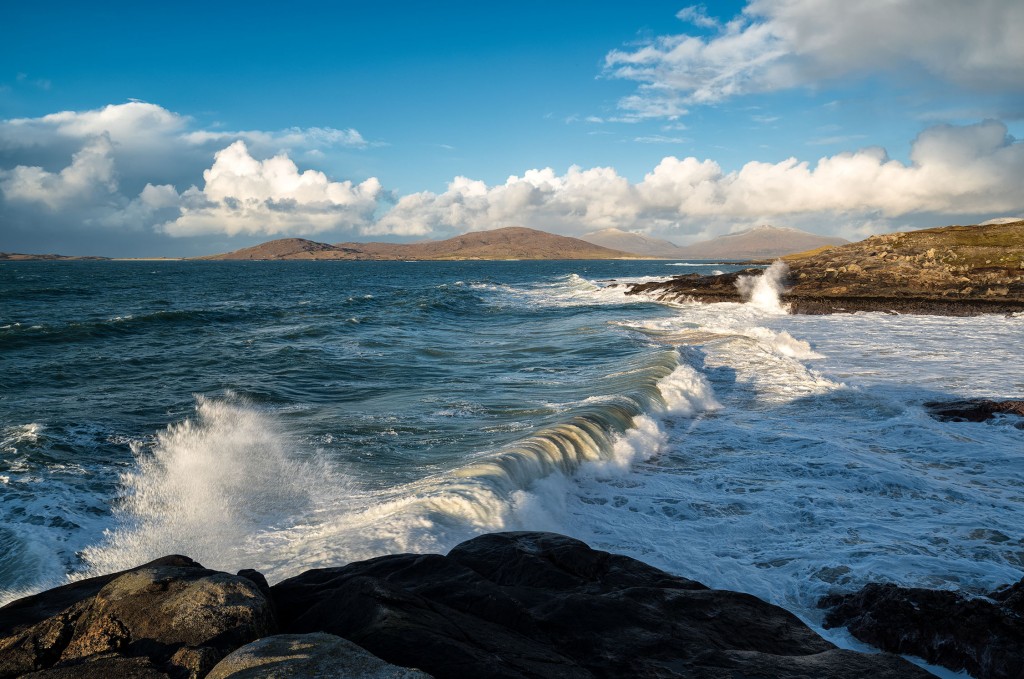 Aside from this, the lure of Harris was, for me, epitomized by the sight of an otter passing within 30 feet of us as we stood taking photographs on an isolated and tiny beach on North Harris and, an hour or so later, as we leaped from the car to capture an image of snow squalls engulfing wildly illuminated mountains, the sight of a Golden Eagle flying off as we disturbed it. 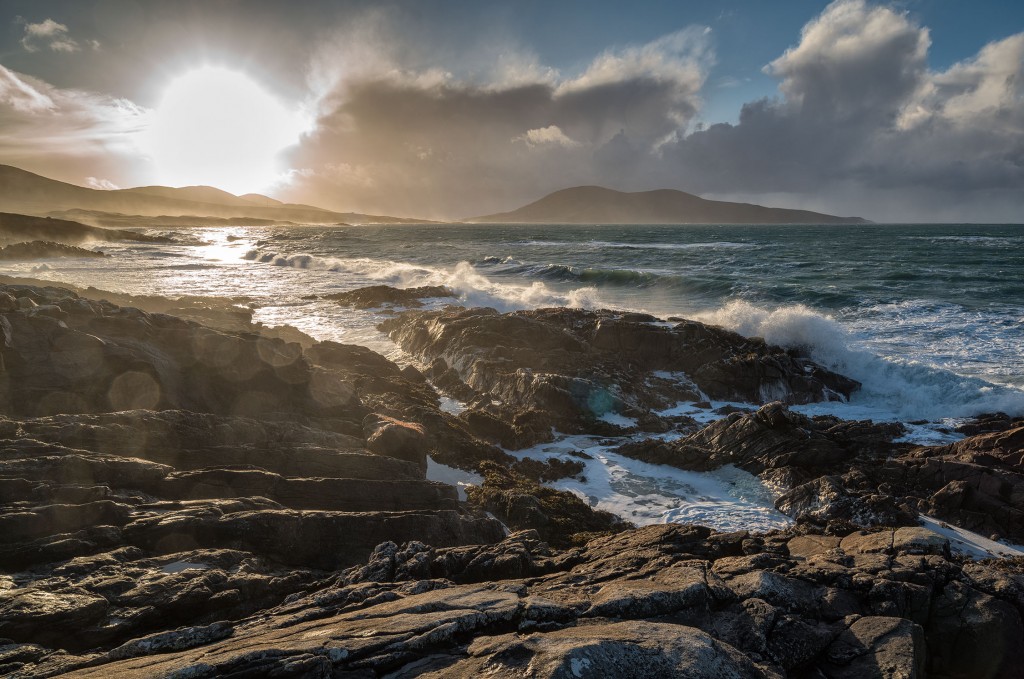 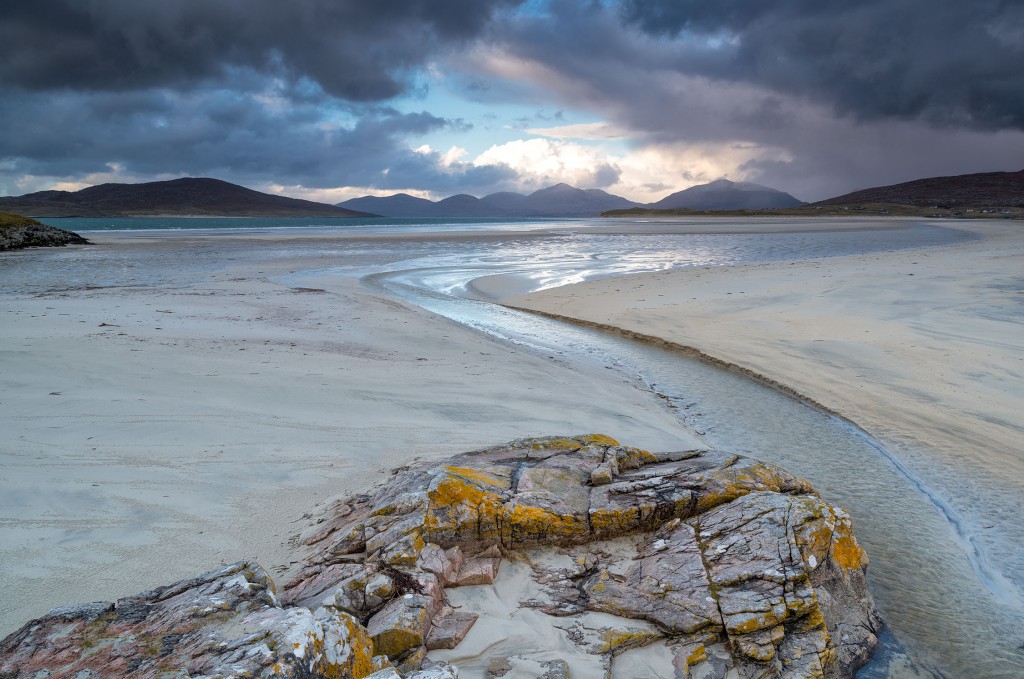 South Harris – Twilight on the Island of Taransay, Luskentyre and the Mountains of North Harris from Traigh Sheileboist (c) Bob Hamilton

All in all, the trip was, despite the extremely variable weather, well worth it, not only for the images captured but also for the lasting memories of Harris in particular which has made me determined to return. I definitely have caught “Hebridisitis”. 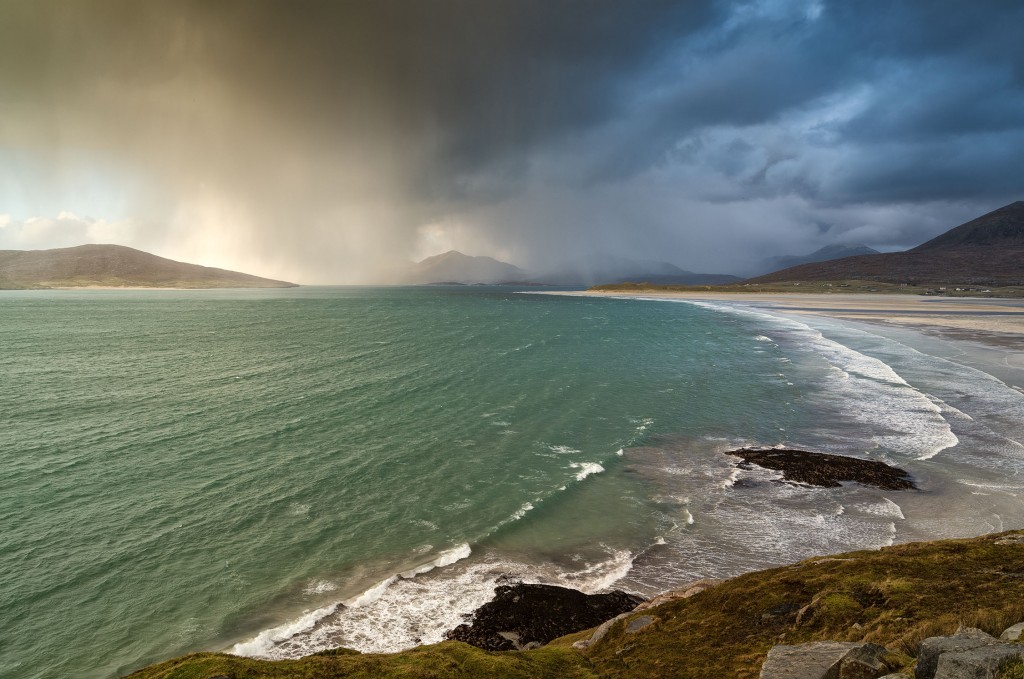 The camera and lenses also lived up to their promise and my expectations by working flawlessly and never missing a beat, despite, on several occasions, receiving a complete soaking. Cameras taken were, as stated, the new CMOS-sensored S typ 007, with the CCD-sensored S typ 006 as back up which, as it fortunately turned out, was never required. Lenses taken were the 24mm wide angle, the 30-90mm zoom (24mm to 72mm full frame equivalent), the 120mm macro, the 180mm telephoto and the Hasselblad H 300mm telephoto mated to the Leica H lens “smart” adapter. 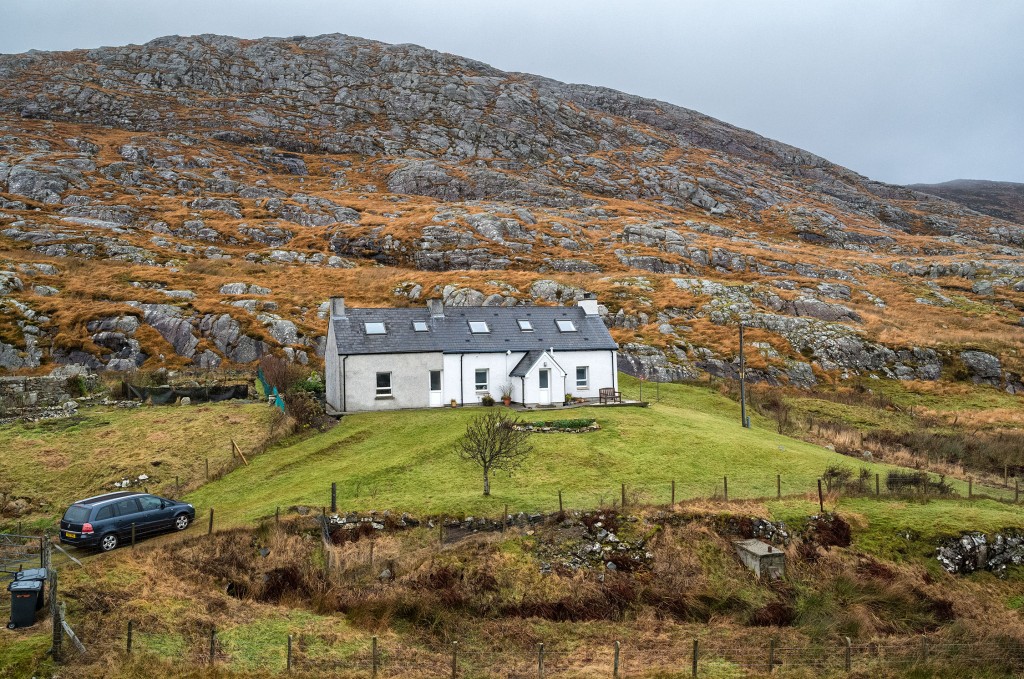 As they should be, given the price and the lack of compromise in both design and manufacture, the native S lenses are superb and all, with the possible exception of the zoom (although I doubt that statement given its optical quality), are APO corrected. Given proper technique, the S system produces images second to none and, allied to either the new CMOS sensor or the old CCD sensor, produces images of huge tonal depth and superb resolution. Both sensors have 16 bit colour depth which I don’t doubt greatly contributes not only to this but also to the enormous flexibility and dynamic range of the CMOS sensor which I would say has the best part of a full stop advantage over the excellent Sony A7R2. 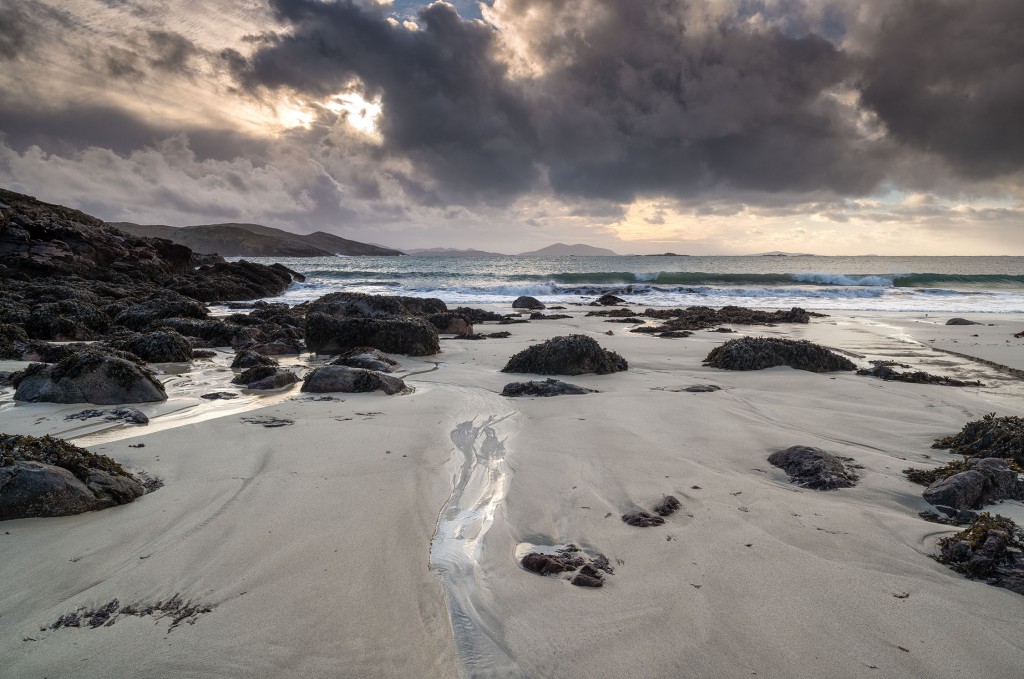 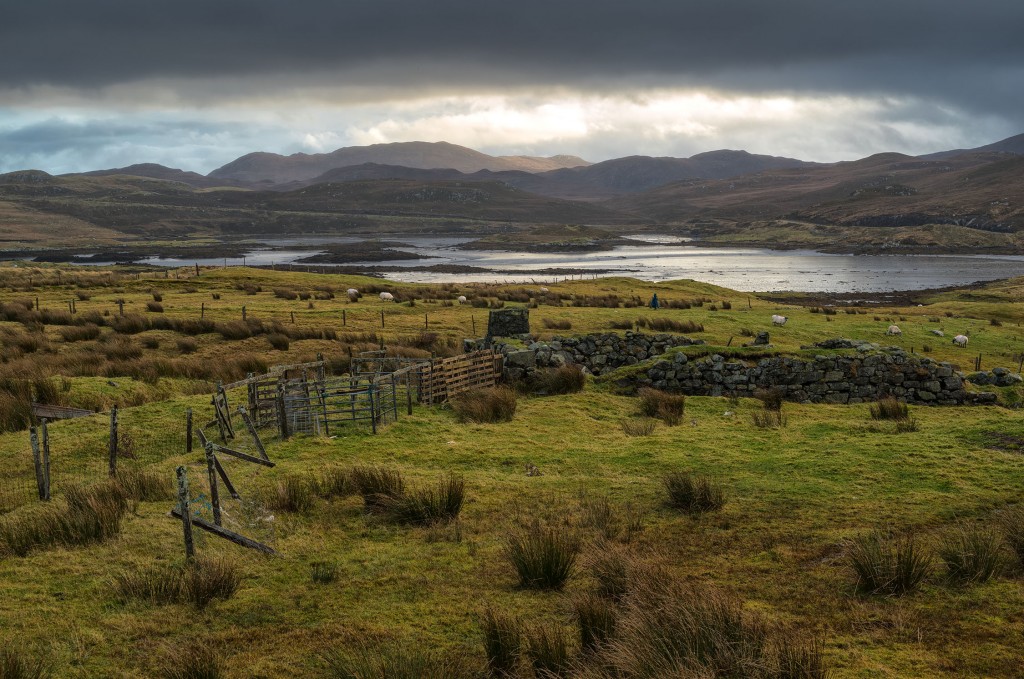