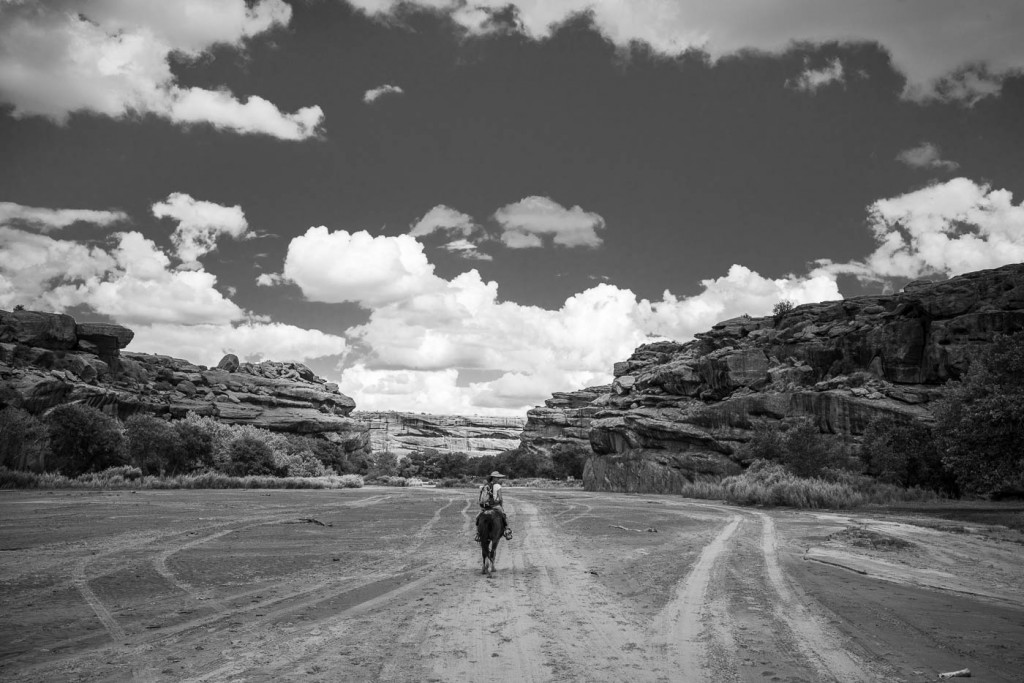 The phone call was a mildly disappointing experience. In my naive mind, South of France calling Navajo Nation should have entailed far more obstacles than linguistics alone might suggest, but life has moved on since John Ford and contact was swift, easy and very kind. Though not without issues :

“Are you experienced riders ?” came the disturbing question. 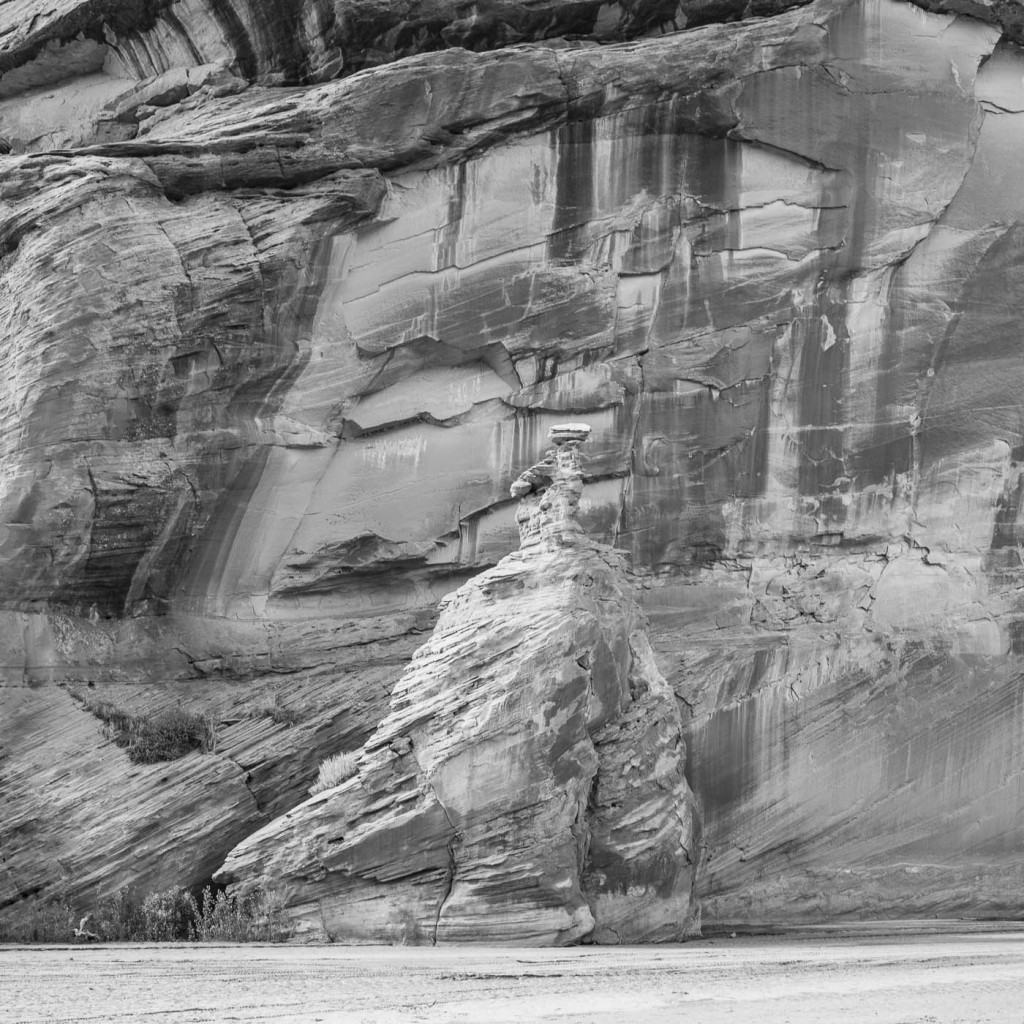 Our excursion was a birthday gift to my wife, which I was booking months ahead while planning our (now past) summer trip to Arizona and which I was not going to spoil by admitting my inability to tell the front end of a horse from the rear, at the risk of limiting the guide’s ambition.

“I’ve been riding for 35 years, and my daughter and wife are better than me”, was my reply, which kind of surprised me as I heard myself say it. The reality being that someone had paid me a 30 minute beach horseback ride 35 years ago as a holiday treat and that was the extent of my horsemanship. 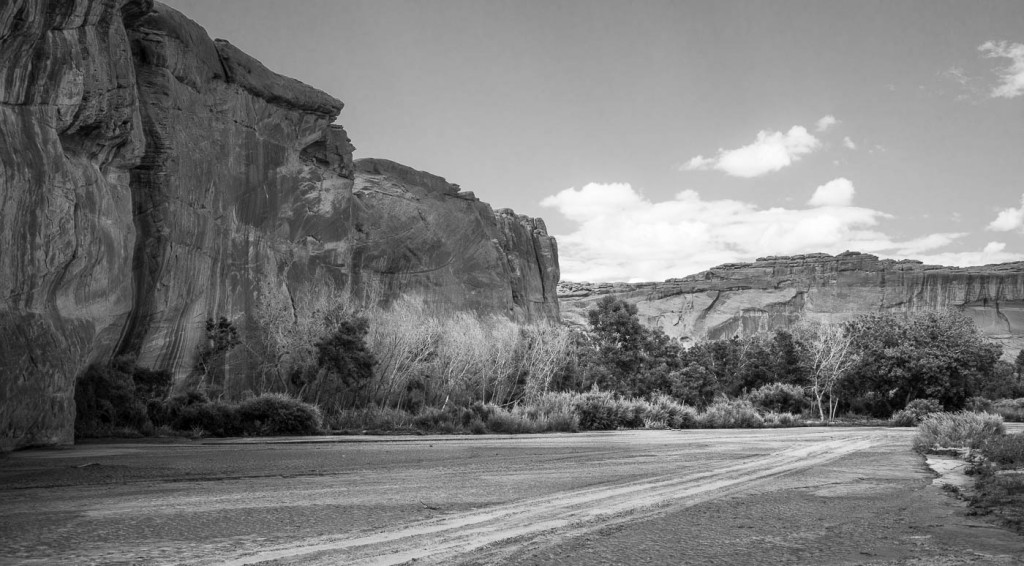 That lie firmly in place, I proceeded to organise everything for the 2 day ride into this legendary canyon, with Edward Curtis and Ansel Adams mental imagery fueling my dreams. But what do you pack for a such a photo trip? Come to think of it, is there even such a concept as horseback photography? The idea seemed as remote from tripod-based landscape shooting as could be imagined.

As week passed, so my ambitions dwindled, to the point where I almost accepted the idea of taking a 2-day break from feeding South-West American photons to my Japanese sensor altogether. 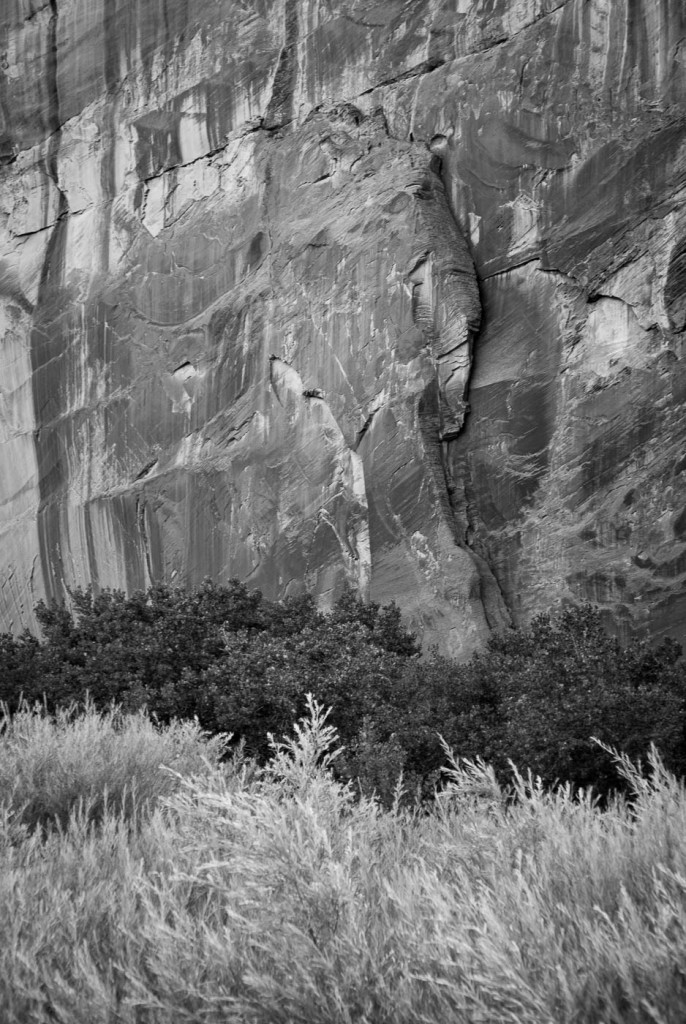 But this is DearSusan and, let’s face it, we stop at nothing to bring you the best 😉

Still, the idea of carrying heavy machinery around my neck for two days while having my nether regions battered under 110°F temperatures somehow didn’t appeal as much as during my initial daydreams.

So my gear was limited to one camera body (Sony A7r) with two small (ZM) lenses : the Distagon 35/1.4 and C-Sonnar 50/1.5. All of which fitted nicely in a tiny Crumpler shoulder bag.

D Day arrived, the long drive from Phoenix came to a merciful end, then we were introduced to our humorous and laid-back guide Gabriel and his apparently docile steeds. Park formalities accomplished, copious amount of green paper exchanged, it was time for lift-off.

Oh, the subtle and sublime art of butt torture (make that arse torture for the other tea-party camp). Twitchy as they were at any sound or unexpected shadows, our mustang seemed unrushed and thoroughly obedient to their master. Passed the early vexation of realising my “expert input” was not so much unnecessary as met with utter disdain, I decided to make the most of the auto-pilot feature built into these horses and enjoy the flippant-slash-fascinating account of the location’s rich history given by Gabriel. 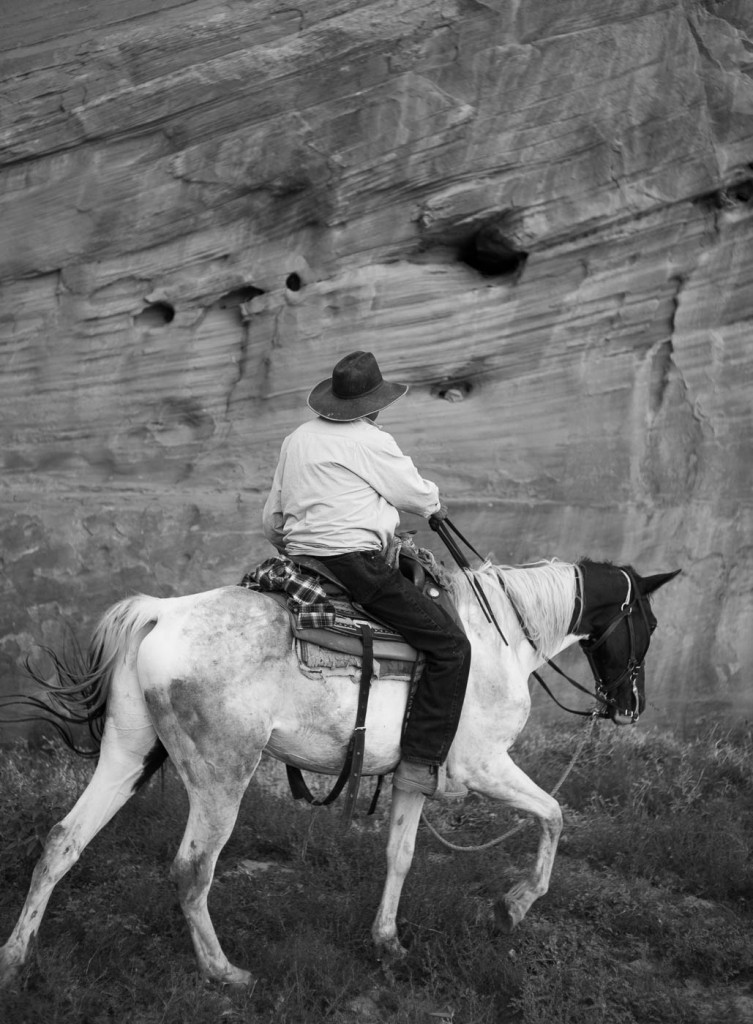 A man of few words, he let us enjoy the unfolding scenery in the absolute silence broken only by the occasional vulture peep and passing jeep carrying giggling tourists deep into the bumpy gorge.

To say we were impressed by the red and green universe gradually growing higher and narrower around us is an understatement.

Equally belittling of the facts would be to not mention the incredulous looks Gabriel and his horses gave me every time the screech of velcro tore through the pervading silence to announce the perilous attempt of pi’tica’ny yours truly to grab his camera, frame and focus from his high shaky seat, trigger the loudest shutter in recorded history, then re-holster the noisy package with the confidence and grace of a one year-old taking his first upright steps.

About Pi’tica’ny. This is probably not how it is spelt. Nor will you pronounce it correctly as it must roll off the tongue with the amused accent of the local mocking the unprepared. The term came up while inspecting some of the hundreds of petroglyphs present on the cliff walls. One of them depicted .. a chicken.

Compared to the grander theme of previous engravings, this seemed a little mundane, until Gabriel explained how said volatile has been kindly removed from the custody of naive East-Coast visitors who had planned on settling down in the West only to encounter the tousled welcome of his Navajo ancestors. Pi’tica’ny, therefore is a local term for those who do not live long, the naive white men who came along to provide food and amusement to past dwellers of the canyon. (All of this explained with kindness, respect and a lot of fun).

By night fall, my bum was a little sore but what aching it felt was a moonlight shadow compared to the tension that had built up in my legs. Gripping a moving platform with unprepared adductors while my arms fiddled with dials and lens changes was as new to me as the pain that shot up the inside of my legs as I dismounted. Clearly hadn’t thought this through 😉 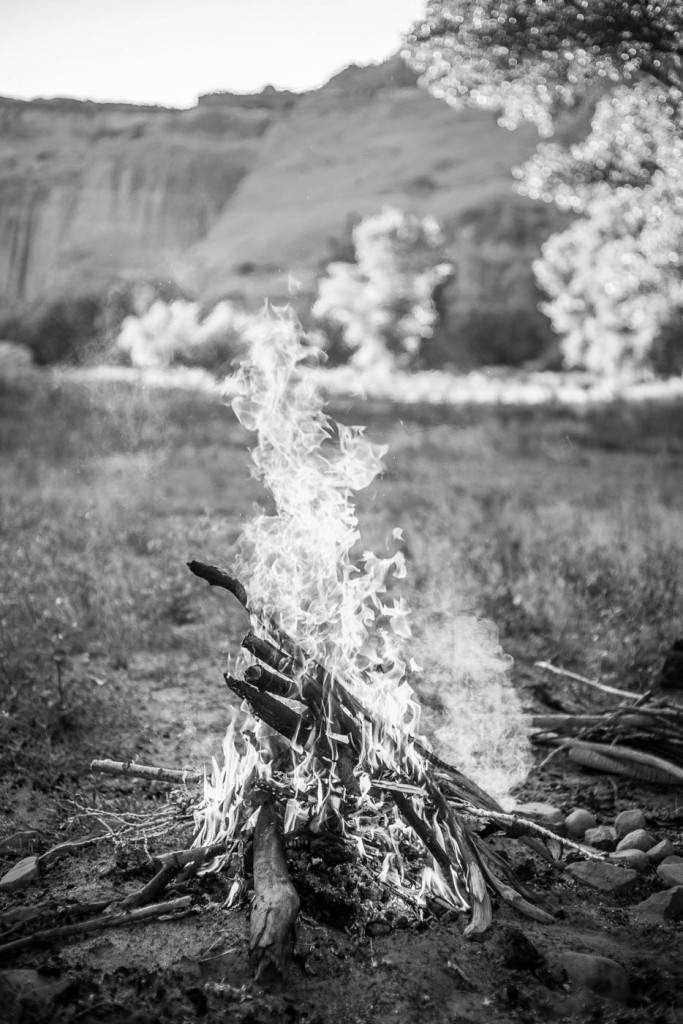 Fortunately, all of this was swiftly blown into insignificance by the onslaught of the hungriest mosquitoes this side of the Everglades. A 13-year drought had ended the previous spring, to the relief of local farmers (yup, there are loads of small farms inside the canyon), painting the canyon floor a vibrant green and providing shelter for an army of winged bloodthirsty darts that drove us nuts in instants.

I though our guide may have lost it completely, watching him gather manure bare-handed and plonking it onto the fire for all to smell.  Death by blood suction or death by stench ? 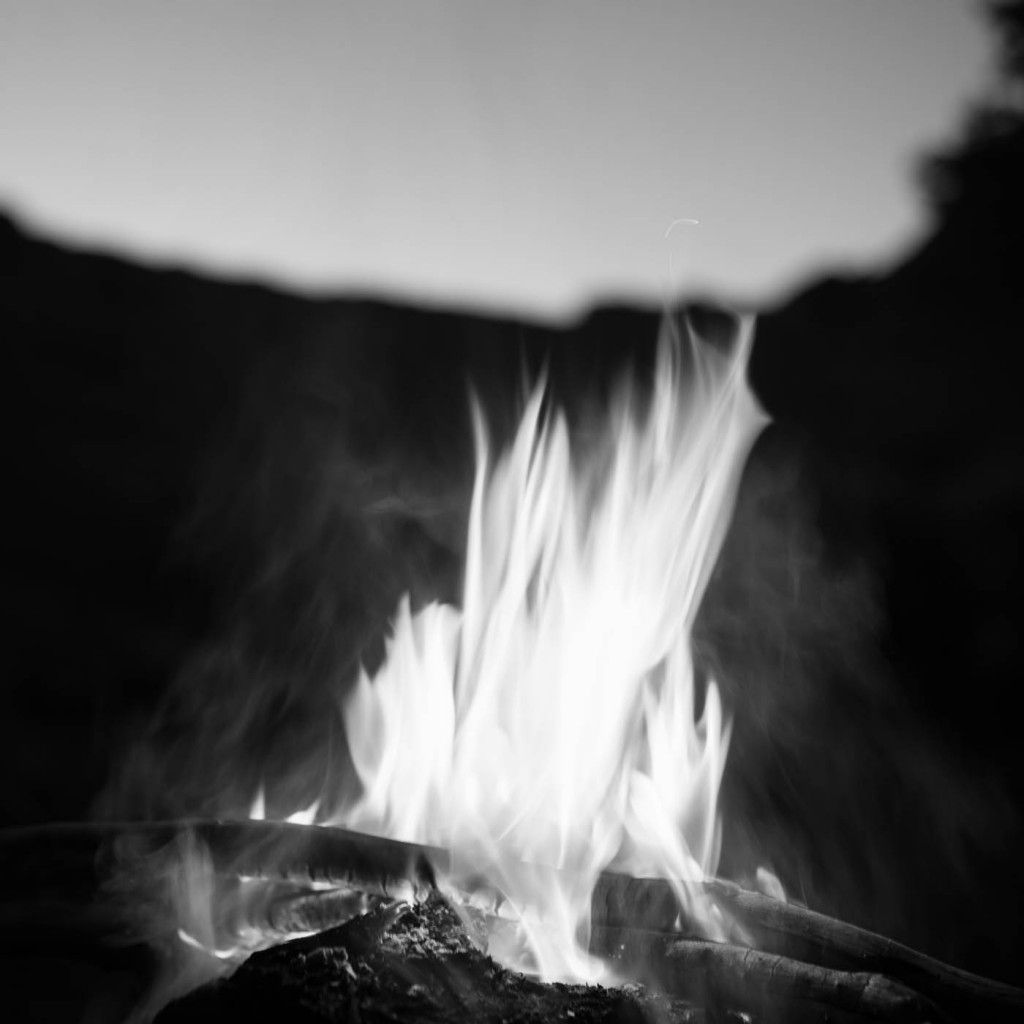 Neither, it turned out.

Within seconds, the smoke – which actually smelled far more like the weedy streets of Amsterdam than anything poo-related – cut straight through the army of blood-sucking drones and provided a heaven of romantic tranquility and authentic exoticism.

That and lung cancer the next day, probably. But that small downside didn’t matter a second, so pleasant was the evening that unfolded peacefully, to the humming of a Navajo man who never leaves his canyon, his safe place as he calls it. 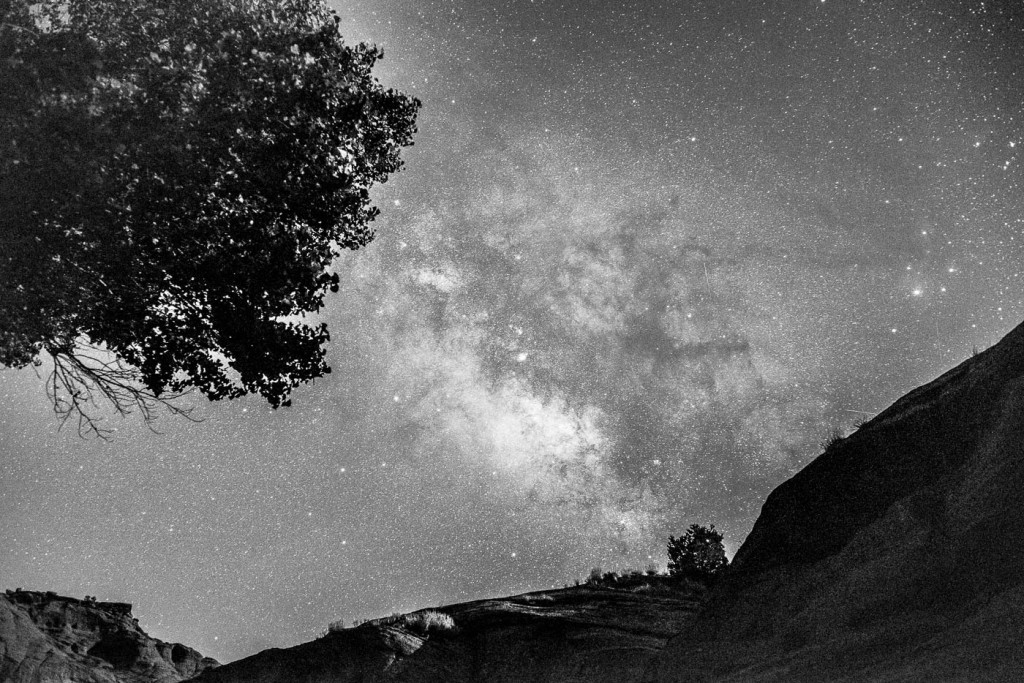 Speaking of safe … The first thing this white tourist thought about when not absorbed in groin stretching is what variety of wild animal was most likely to enjoy him for supper.

Gabriel soon reassured us that there are no dangerous snakes on the canyon floor and that the bears are several mile upstream. The fact the we had ridden past a mustang missing half of its neck an hour before made me ponder the exact yardage of the Navajo mile. Still, I summoned my courage, picked up my tripod for a couple of Milky-way grabs between the canyon walls. Magical moments.

The following morning, the extent of the camp prepared for us on our arrival at our camping spot by the rest of the team baffled me. A whole crew had joined us in the evening, 3 generations of it, all smiles and kind words and gorgeous food. This is the view from our mosquito-net tent. Sleeping under the starry sky by a fire and waking up to the luxury of a great breakfast and smiley faces … quite unique. 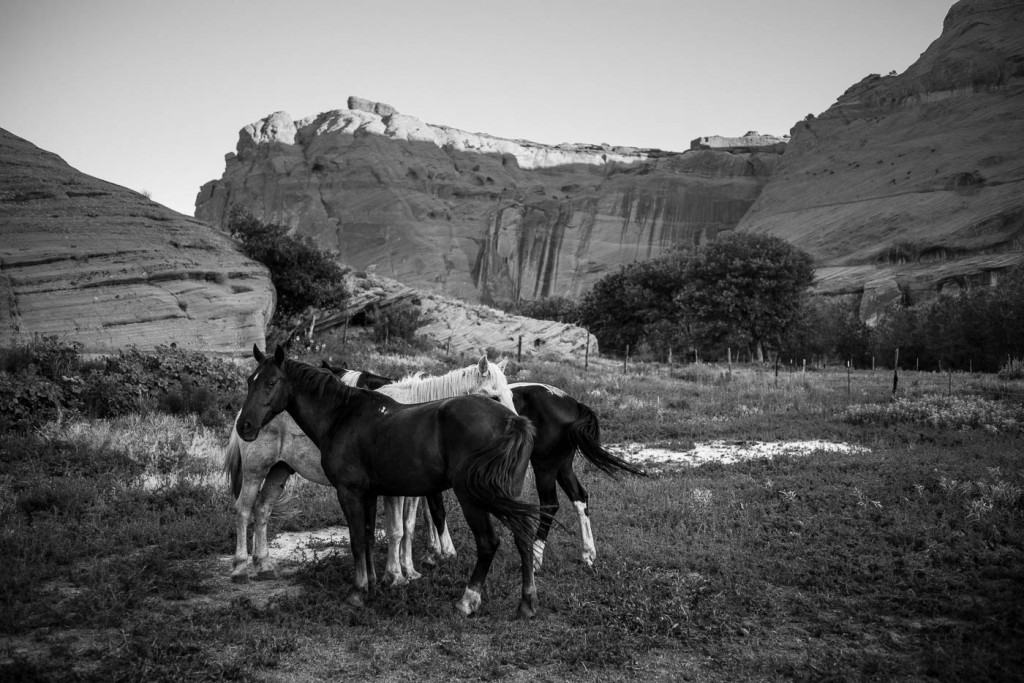 Human-feeding and horse-grooming taken care of, came the dreaded time of departure arrived. 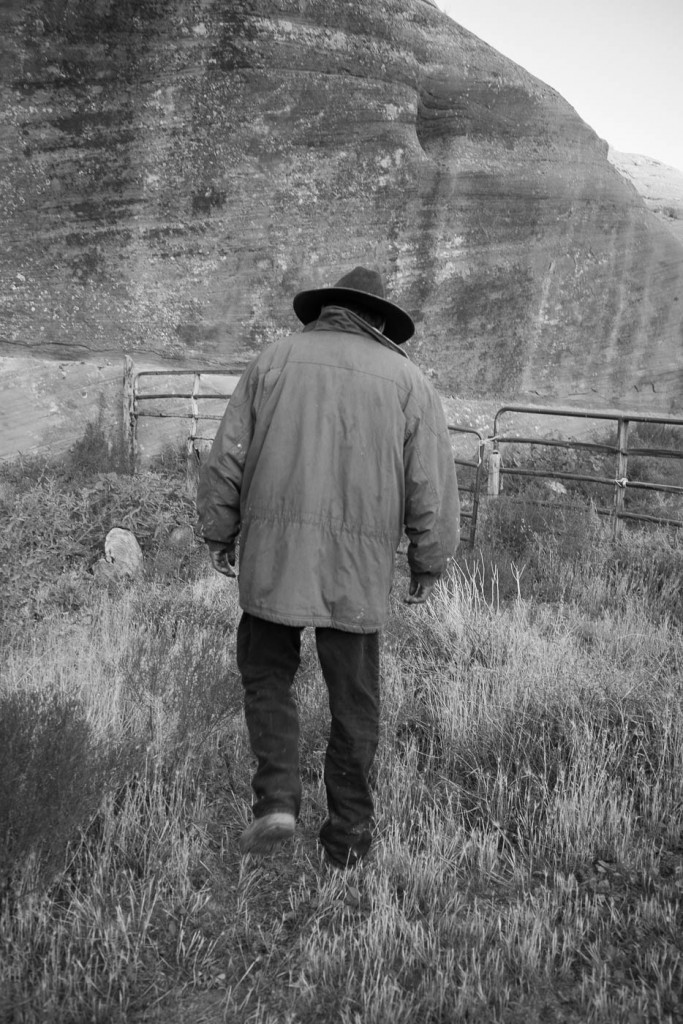 I shan’t bore you with the less-than-orgasmic feeling of reuniting my battered buttocks with shady Sherman’s shaky chair. Let’s just say it took several minutes of walk in deep sand to convince me that death by mosquito+exhaustion was a worse fate. Luckily, the feeling subsides almost as quickly as the shadows on the cliffs. 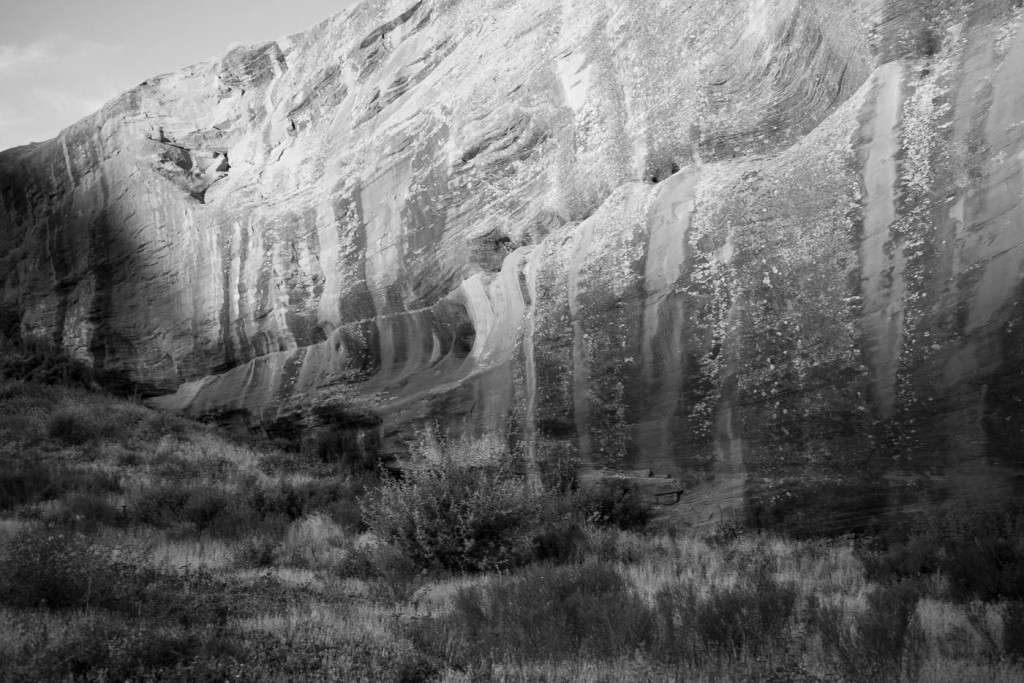 Day 2 was more of the same in different sections of the canyon, with slightly different, but equally beautiful scenery.

So I’ll cut the touristy parts out and focus on photography for this brief section 2. 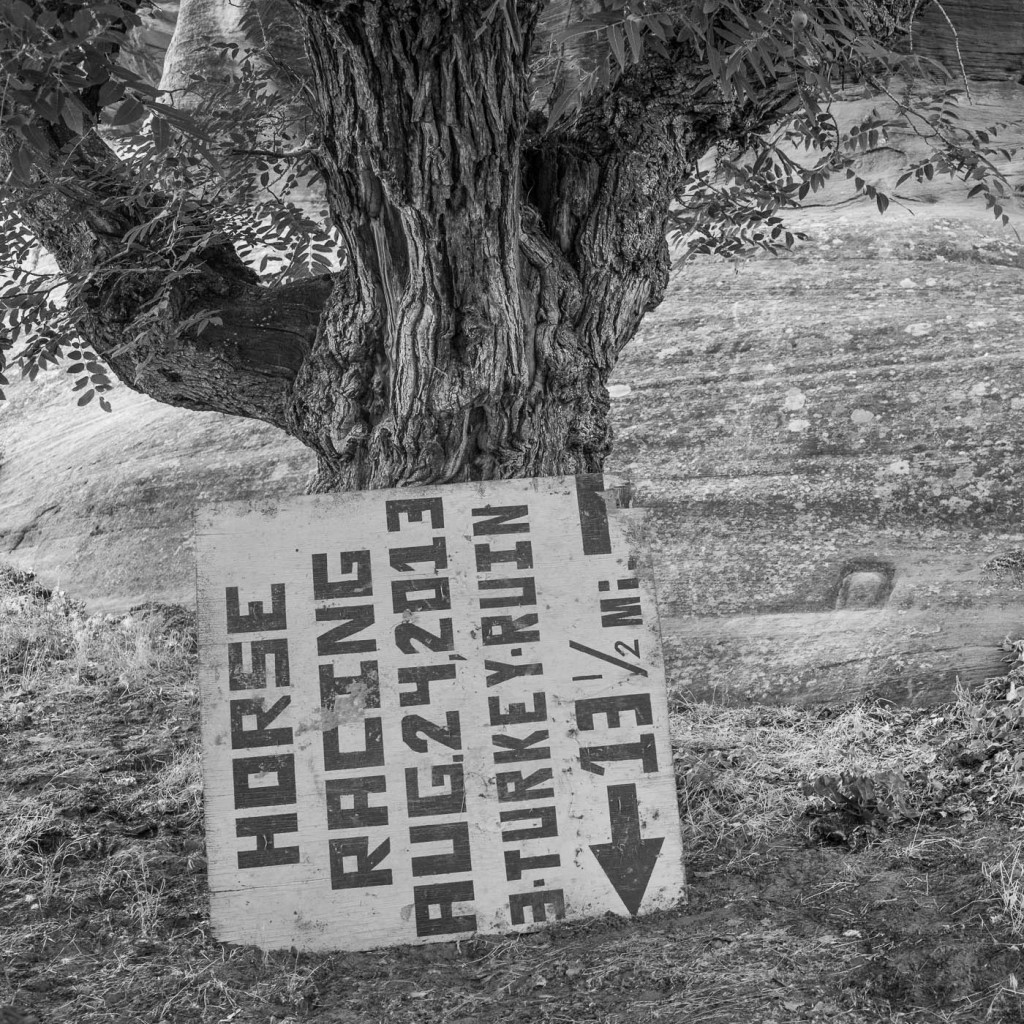 Lens choice proved excellent. After the fall of a member of the crew when a scared mustang reared suddenly, my bravery faltered somewhat and I swapped less frequently, mostly sticking to the C-Sonnar, stitching frames whenever a wider field of view felt useful.

It might seem a shame to remove chromatic information from photographs made in such a colourful environment. Pink cliffs, blue skies, white sand and a broad variety of greens. But the white balance of my A7r was so far off that my attempts to create a consistent set of colour photographs soon ran into a wall. 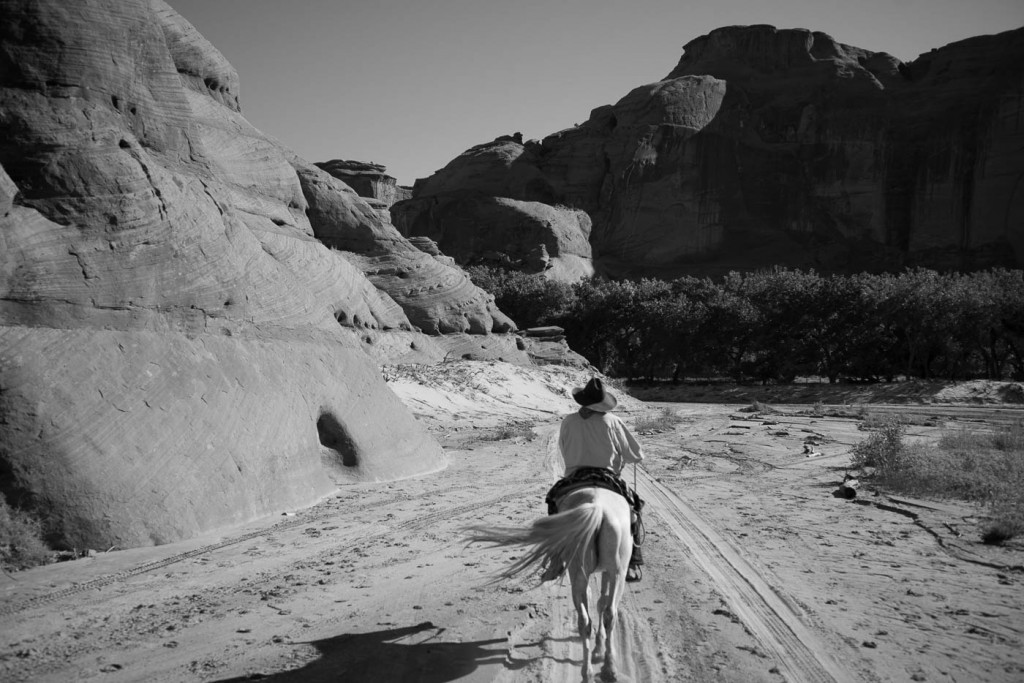 Besides, there is a true charm to B&W for this series. I chose a lower than usual contrast for most of these to create a slightly retro mood, but resisted the easy lure of sepia.

As for shooting from a horse, if John Wayne could do it, why shouldn’t we photographers, right 😉 ? It’s actually a lot of fun.

I lost a few shots to bad framing and quite a few more to movement blur. I would suggest higher ISO settings than usual and smaller apertures to compensate for focusing difficulties (that or an AF lens, obviously). And a wider lens is probably a better idea. I should have used the 35 more than the 50 and cropped out unwanted areas rather than find myself with missing parts such as in the pic above. Lesson learned. 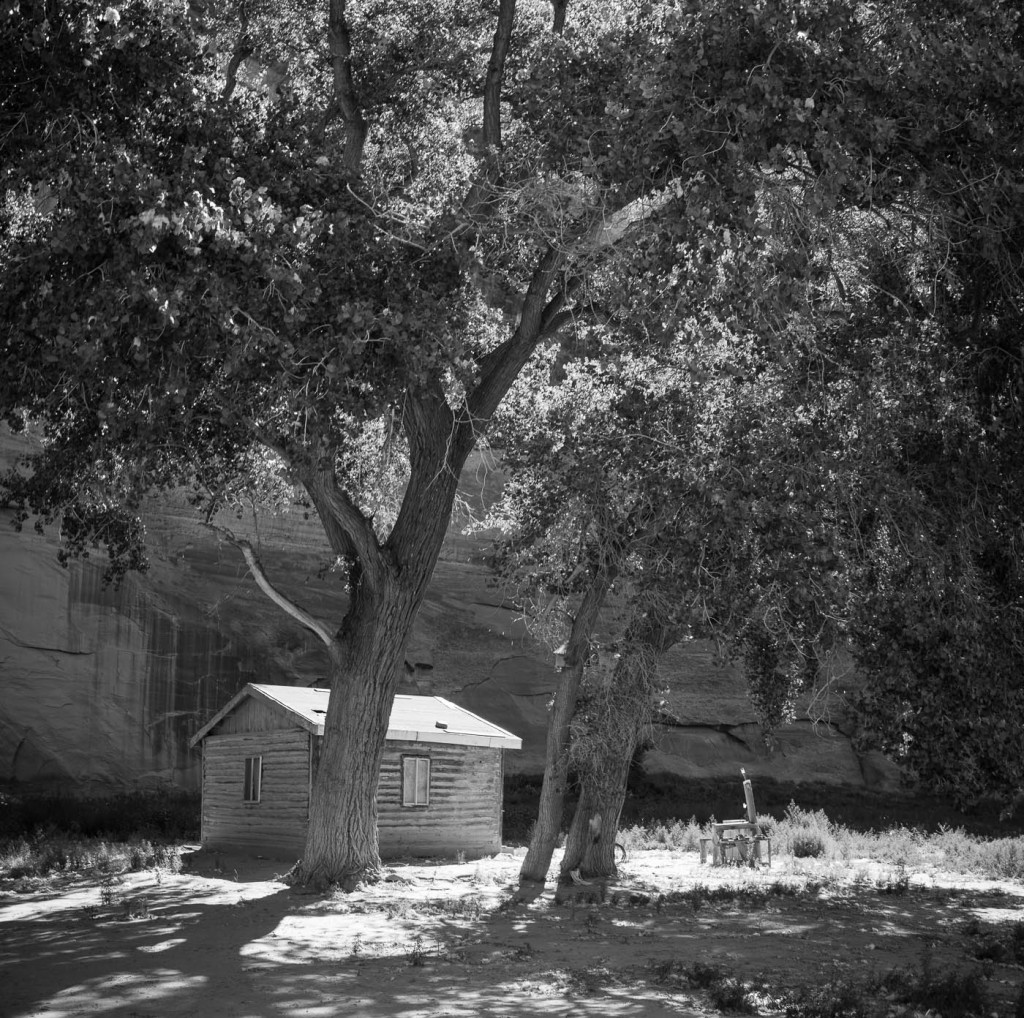 Apart from that, there’s very little to tell. The whole experience is far more engaging than the sterile-feeling visit to Monument Valley that followed the next day. I really recommend it for anyone wanting to pepper a different photographic trip with cultural interest and human contact. True riders will also love the freedom of riding at their own pace with no stay-in-line obligations. 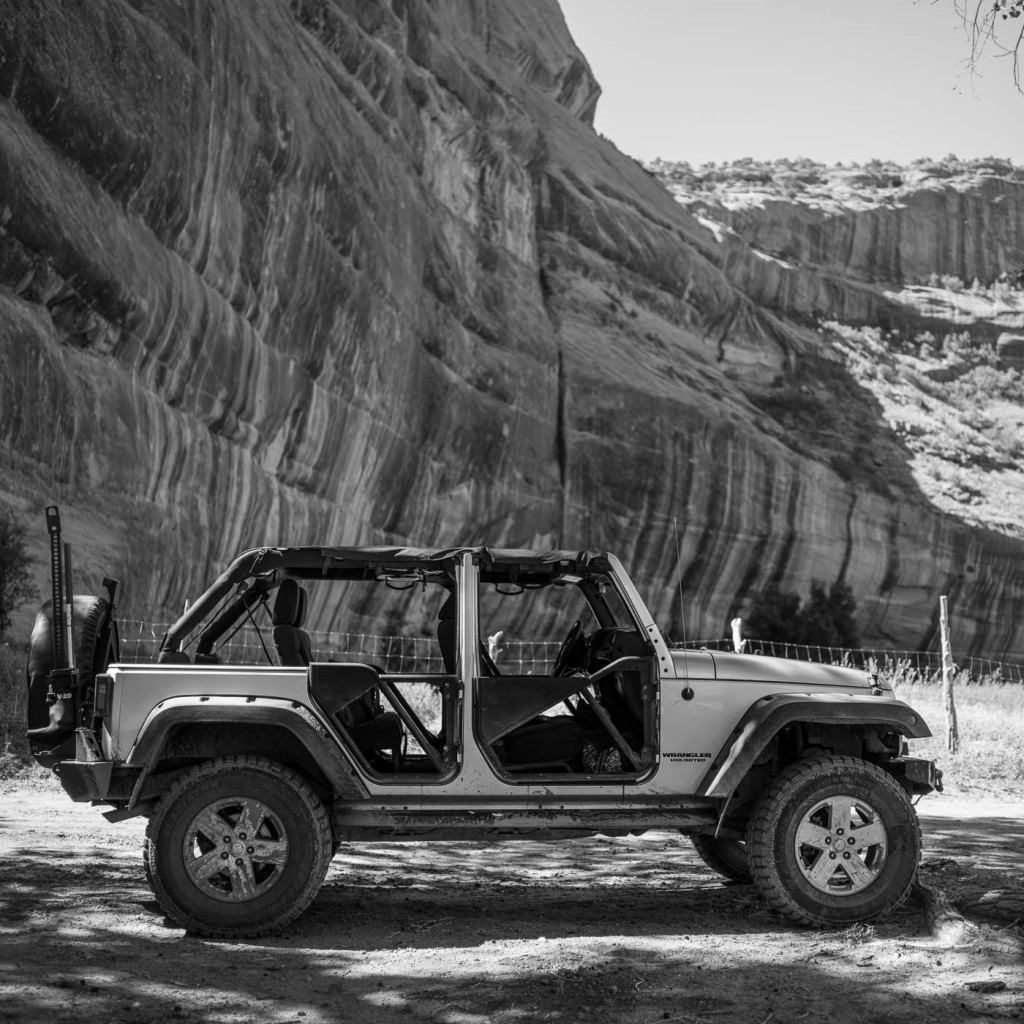 Chosing a tour company is tough. Booking is worryingly laid back, tourists have been left at the altar many a time, some owners treat their horses really badly, others are far more loving. Anyone expecting tourist facilities experienced in other parts of the country is in for a shock. Payment is cash, in the back of a car, facilities are non-existent and all along, you feel quite uncertain of what happens next. It seems almost certain that the very notion of insurance is unknown locally. Caveat Emptor.

But we booked with Tso’s Horse Tours, were charmed by the kindness of owner Evelyn and the apparent care given to the horses by Gabriel and would heartily recommend the company on the basis of our two days with them. Be sure to look up Tripadvisor or other resources before your visit as things may change. And enjoy. 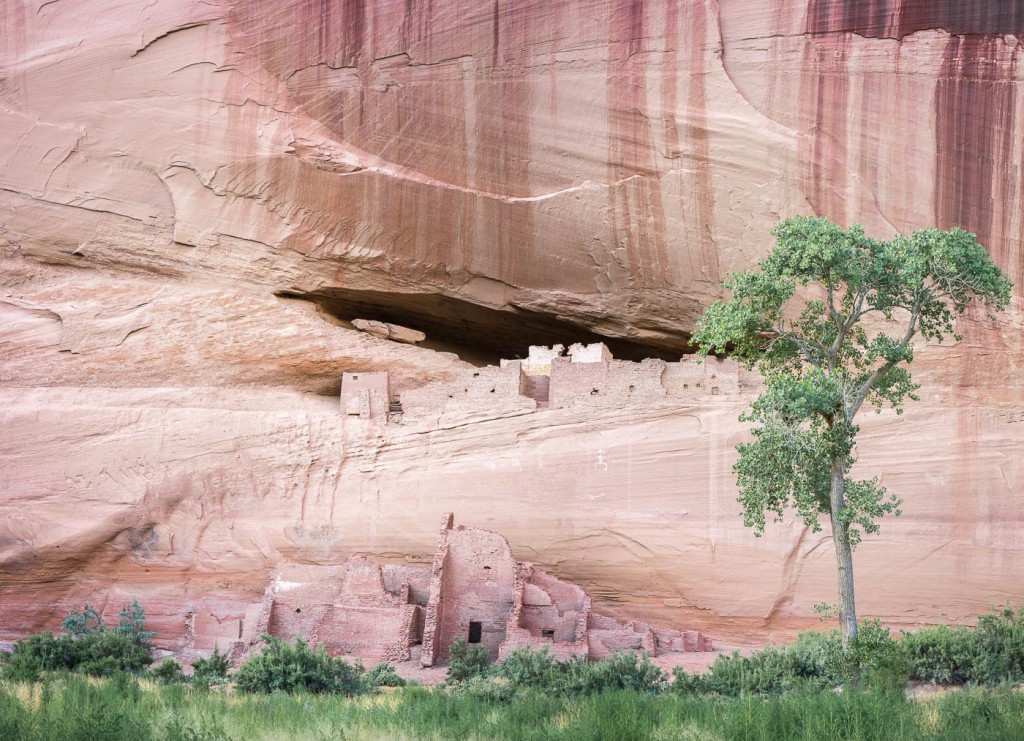