#377. On Location: From Flagstaff to the Grand Canyon and Back

4:40 AM, a long way from nowhere. The blinking lights ahead in the dark signal a car wreck sitting amidst debris and, next to it, a huge a dead elk.

3 previous close encounters with smaller, but no less intimidating deers, earlier still that morning had put a damper on my intention to be generous with the right pedal in order to reach my destination before sunrise. Witnessing how the night-time collision has all but destroyed the car and killed that poor animal puts the finishing touches to my newfound cautiousness.

We stop to help the car occupants, who are in shock but OK. When they tell us to go, some minutes later, we do so with renewed scare and care of the remaining miles that separate us from the Southern rim of the Grand Canyon. 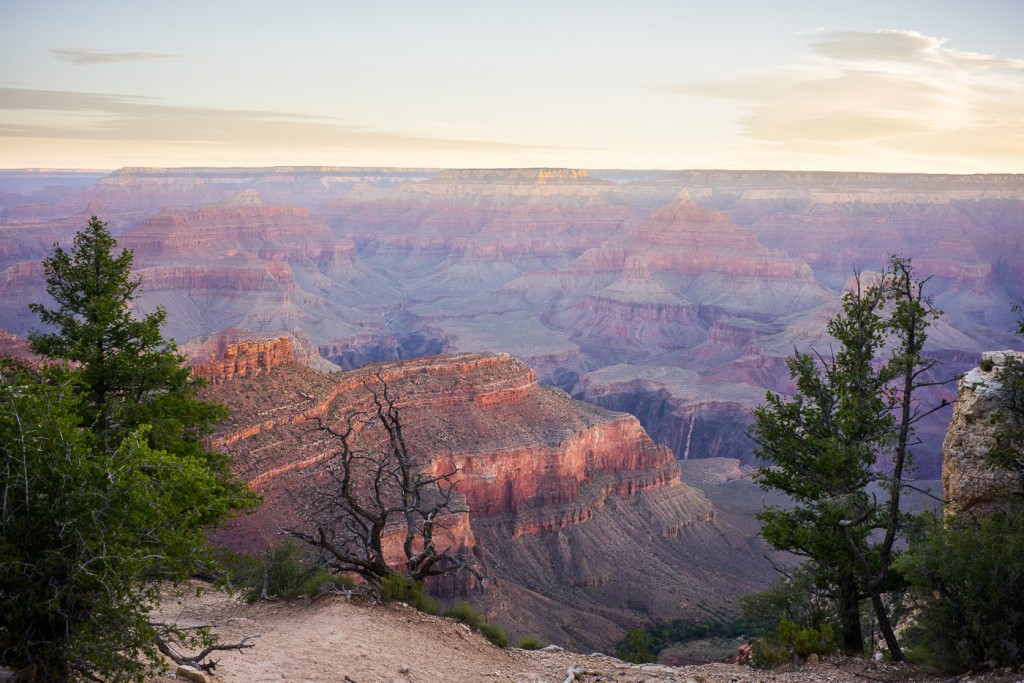 A wildfire with heavy smoke and a super-chatty park ranger later, the car is locked in what seems to be a car park close to the rim trail and I run with my two heavy bags on my shoulders realising I can still make it before sunrise. As breath becomes more and more laboured, shiny tree-tops catching the first rays of light provide an incentive to keep on tearing my lungs a little longer and I finally make it to the rim as the topmost cliffs turn yellow.

Audrey (Distagon 1.4/35 ZM) is mounted on my Sony A7r and I manage to grab this frame (above) in between two heavy breaths. 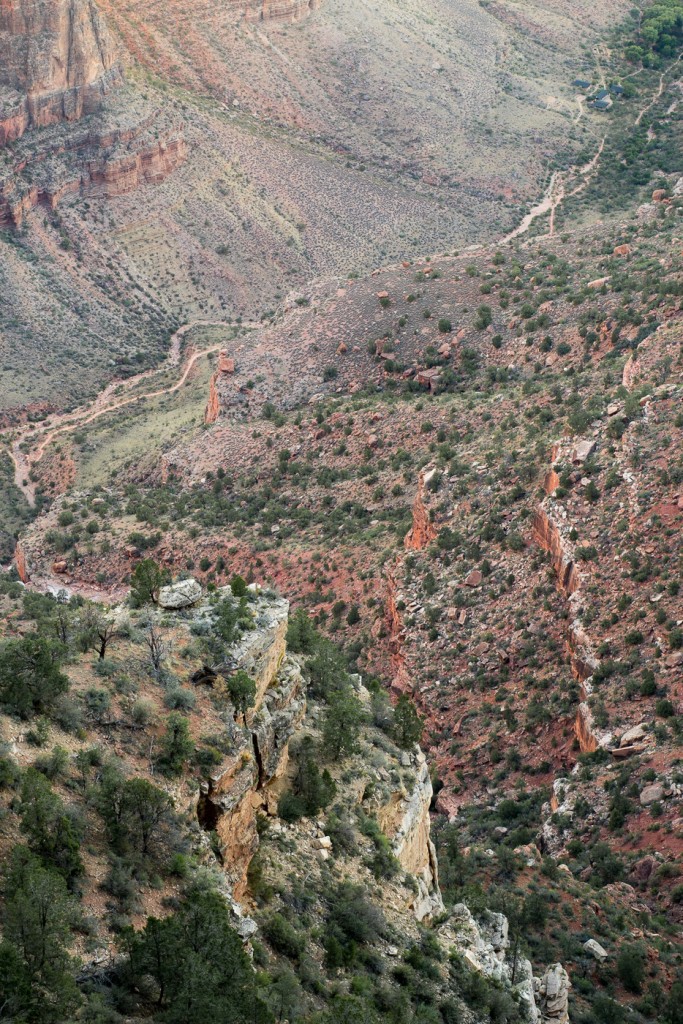 A bit of a disappointment, really. Dull. But a bit of post processing bought it back to life. I took many others in increasing sunlight, some of which are posted below. I’m interested in knowing what you prefer: pre-dawn or sunlit ?

Above is a second pre-dawn photographs using the OTUS 85. Below, same lens, the sun is rising. 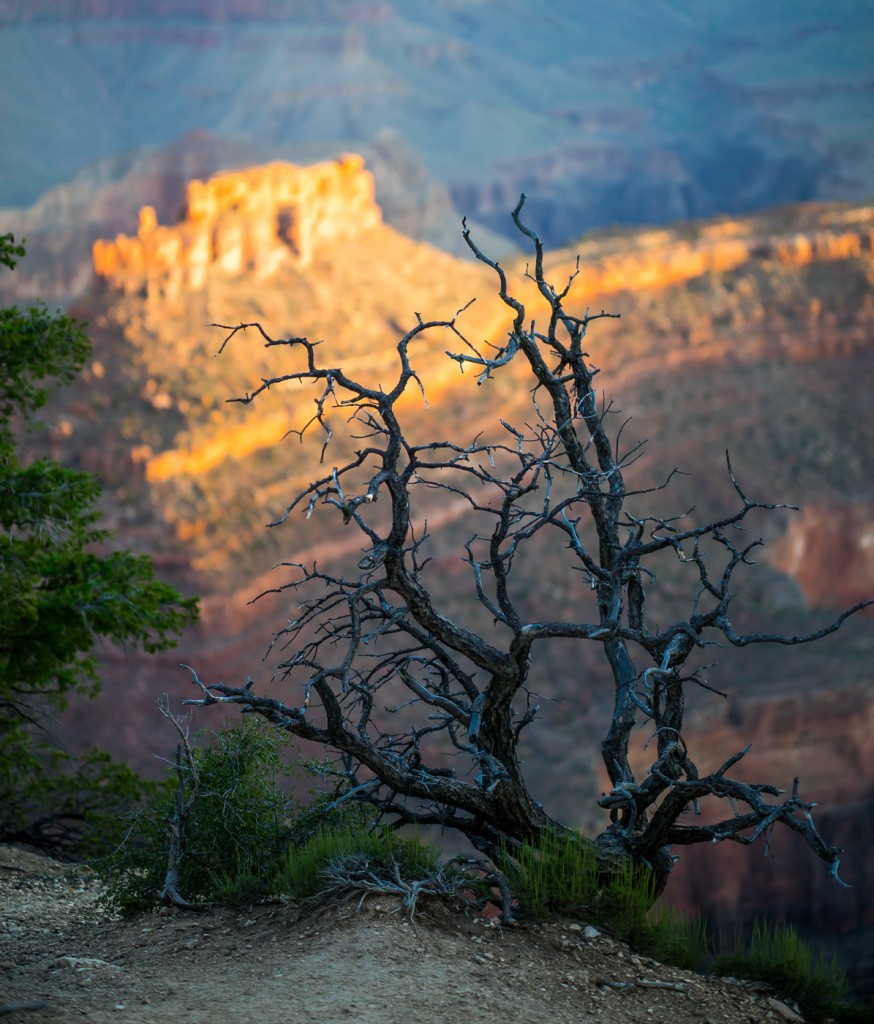 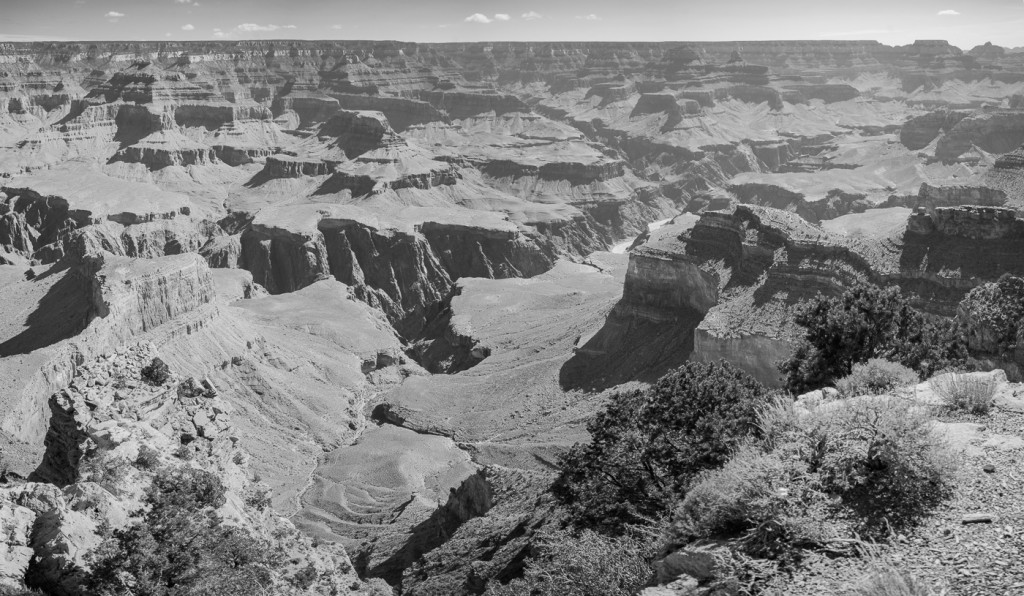 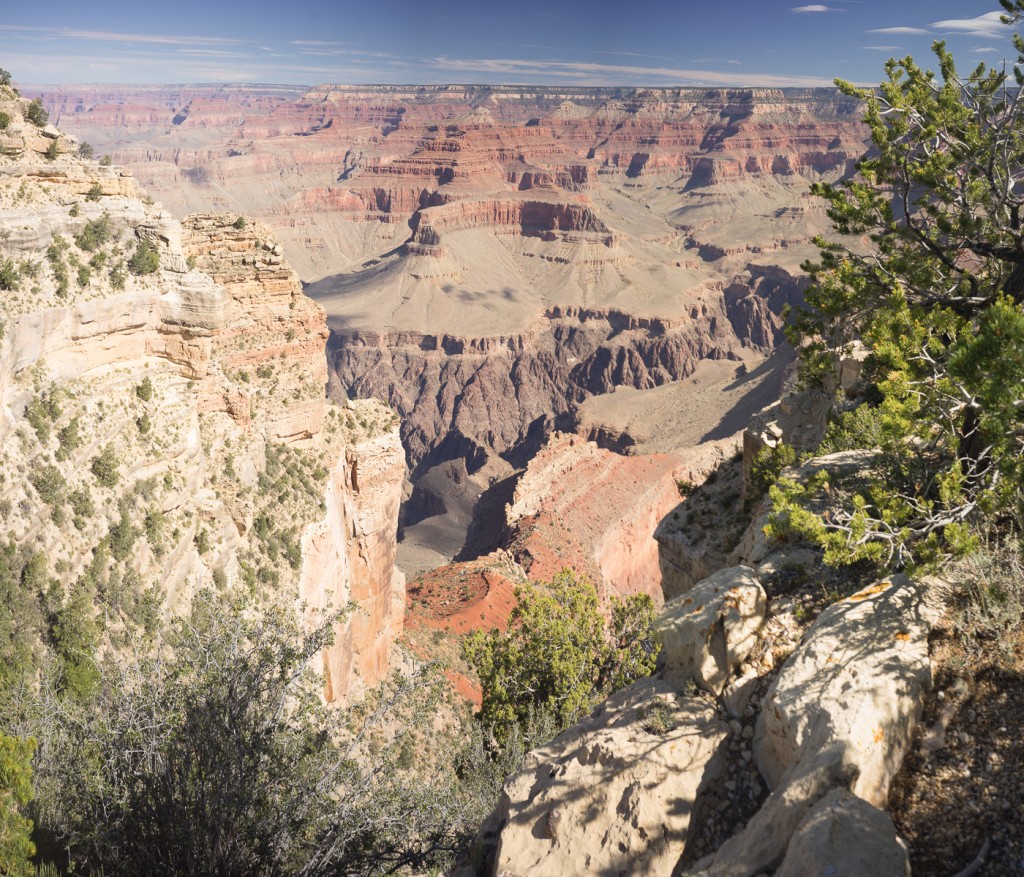 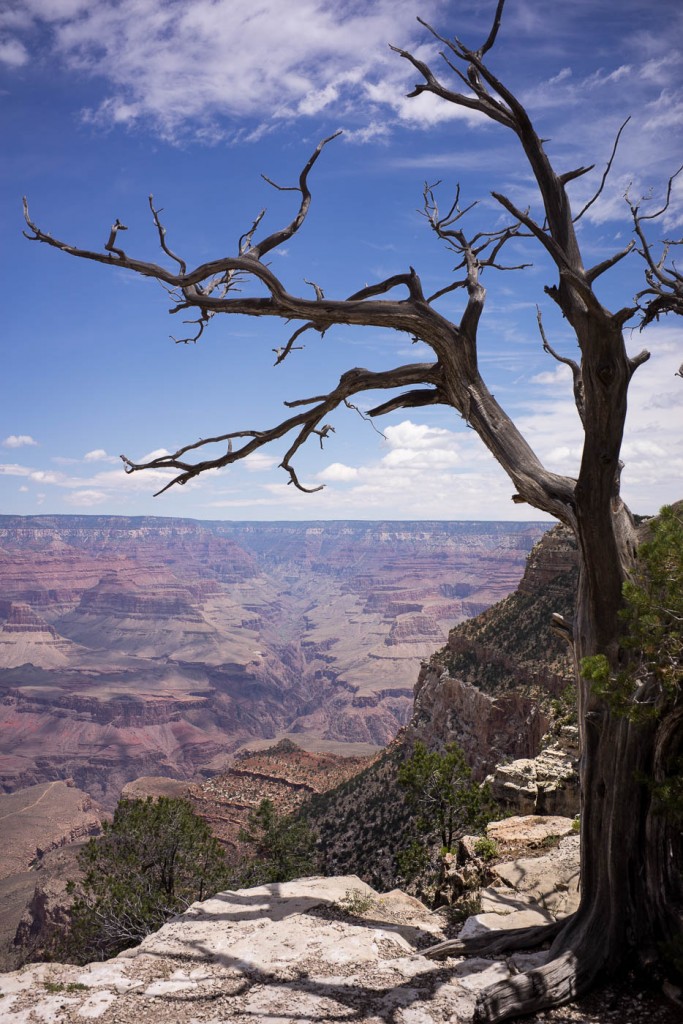 But, back to the trip and justification of the “On location” title of this article.

We left Flagstaff at 3:45 AM in the hope of catching the sunrise at the Canyon before 5:20 AM. It worked but was a close shave. Lesson number 1: allow for plenty of time. You do not want to rush night-time driving, the park itself is huge and takes a lot of time to navigate.

Two roads lead from Flagstaff to the Grand Canyon:

I recommend using 180 North for your entry (about 1h45 from Flagstaff to the rim) and leaving via 64 and 89 South. 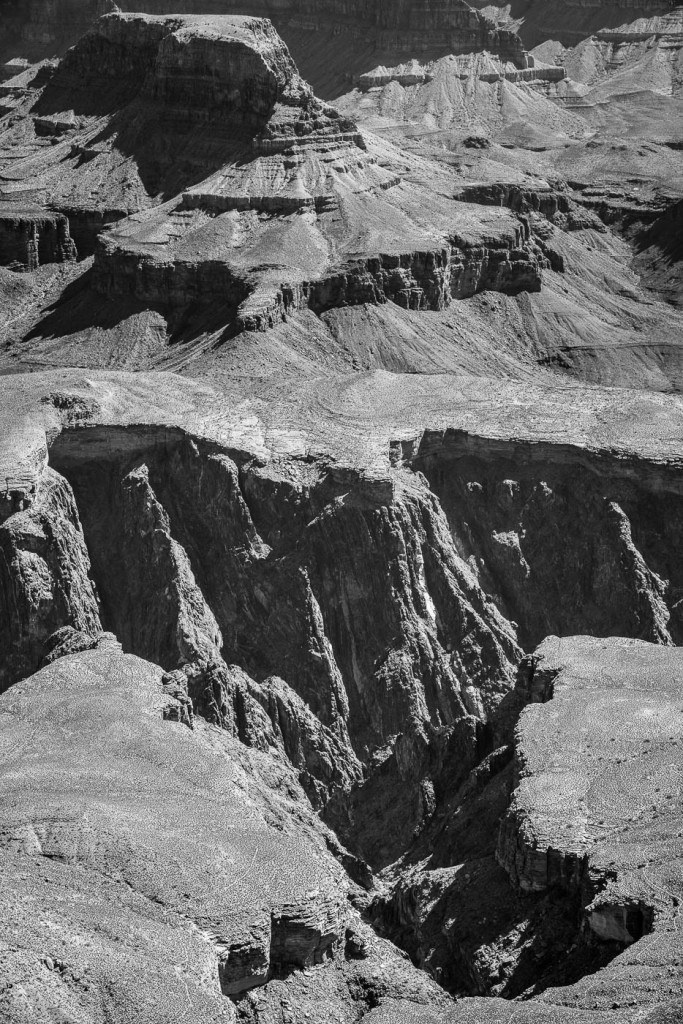 This takes you in on the shortest route, enabling you to photograph sunrise more easily, then makes you leave via the rapidly changing landscapes of 64 (towards Cameron).

On site, shuttle buses take you to several overlooks but do walk along the rim if you can. This will provide you with many view points that haven’t been photographed a zillion times. The background sure remains the same but the foreground changes constantly. We walked one hour to photograph sunrise at several points, then had breakfast in El Tovar, where it was easy to secure a front row table at the early time of day. After this we walked another 3 hours and called it a day when the light was really getting harsh and hazy. 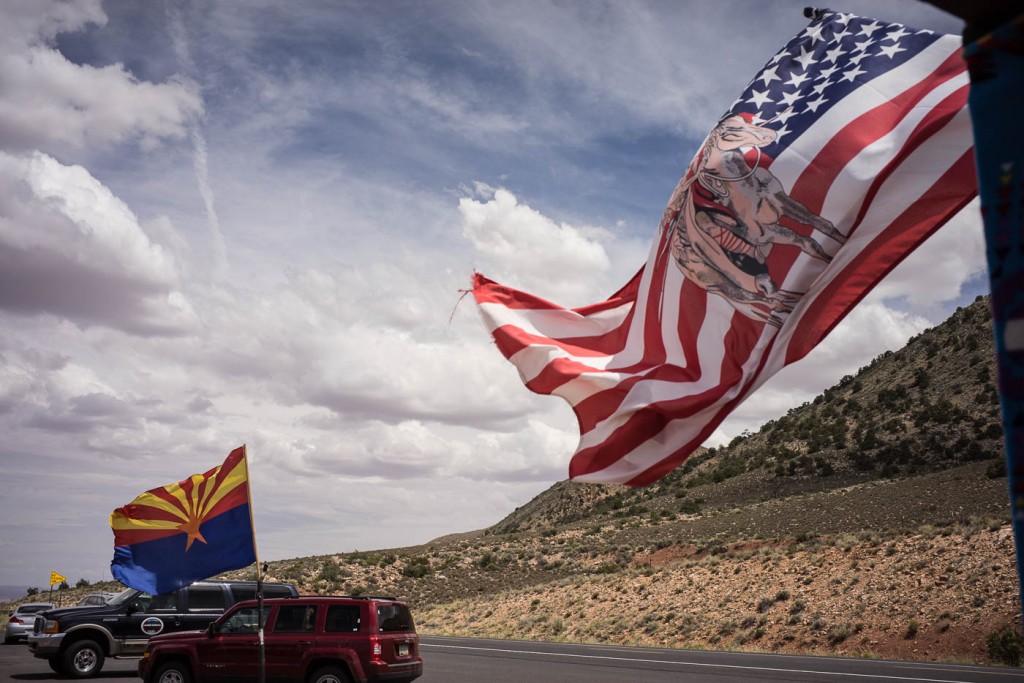 All along Highway 64, the colours and shapes of the landscape evolve rapidly. This road is at least as enchanting as the Grand Canyon itself. It is peppered with Indian markets that provide great photo opportunities and jewelery costing about 10% of the price of those found in shops at the rim. 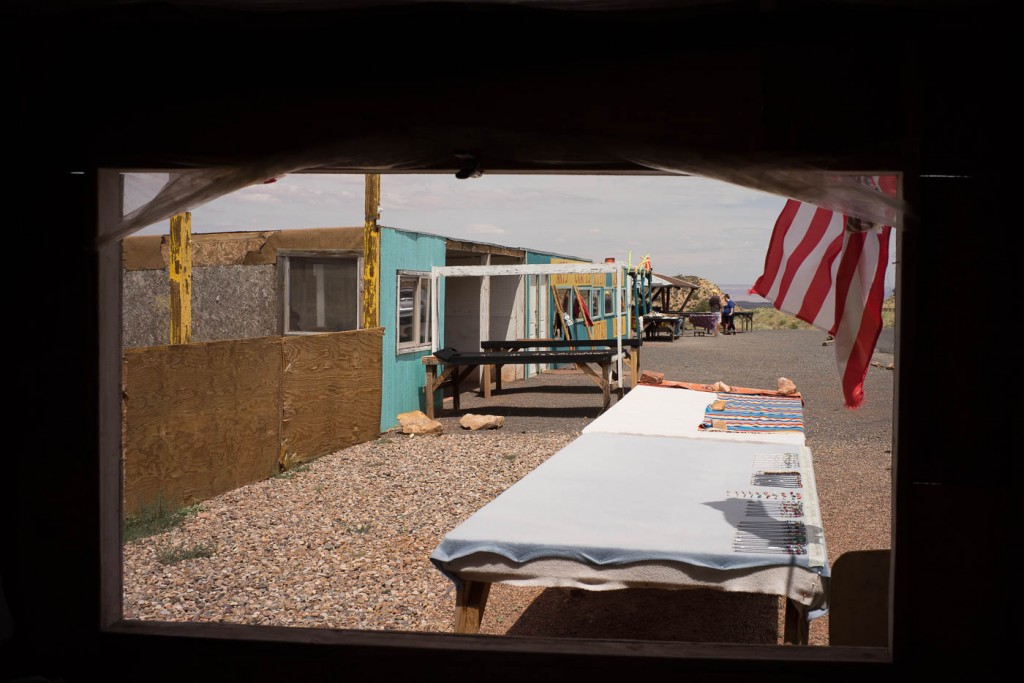 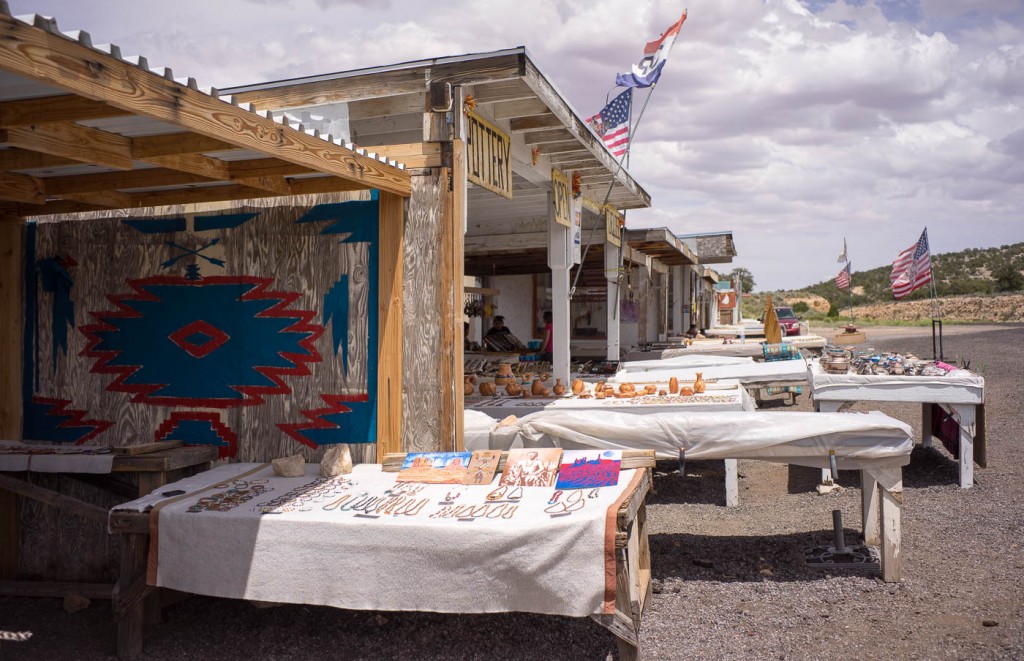 Cameron, at the junction with Highway 89 has an interesting trading post (good for nice food and a few photographs) as well as a fascinating settlement which I’ll return to as soon as time allows.

Highway 89, taking you back to Flagstaff on a direct Southern bearing is also a top-notch route. On the Eastern side lies the painted desert, a colourful display of pastel tones in the distance. If you follow the order of events described here, it will be front lit, and easy to photograph or use as a backdrop. 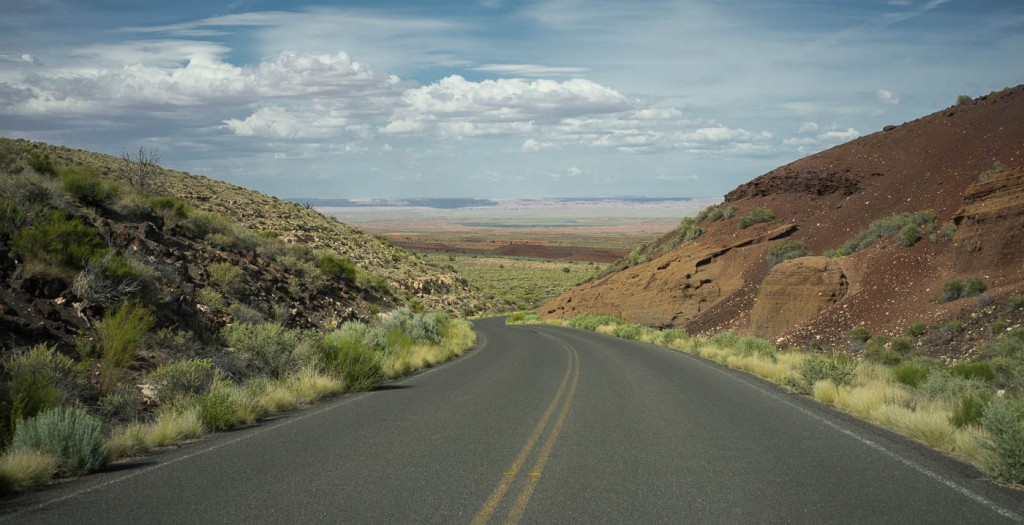 Two thirds of the way down, a 30 mile loop is really worth your time, if you can spare it.

It first takes you to Wupatki National Monument in a very different landscape that spectacularly combines dark olive greens and bright yellows and served for the opening scenes of Easy Rider. 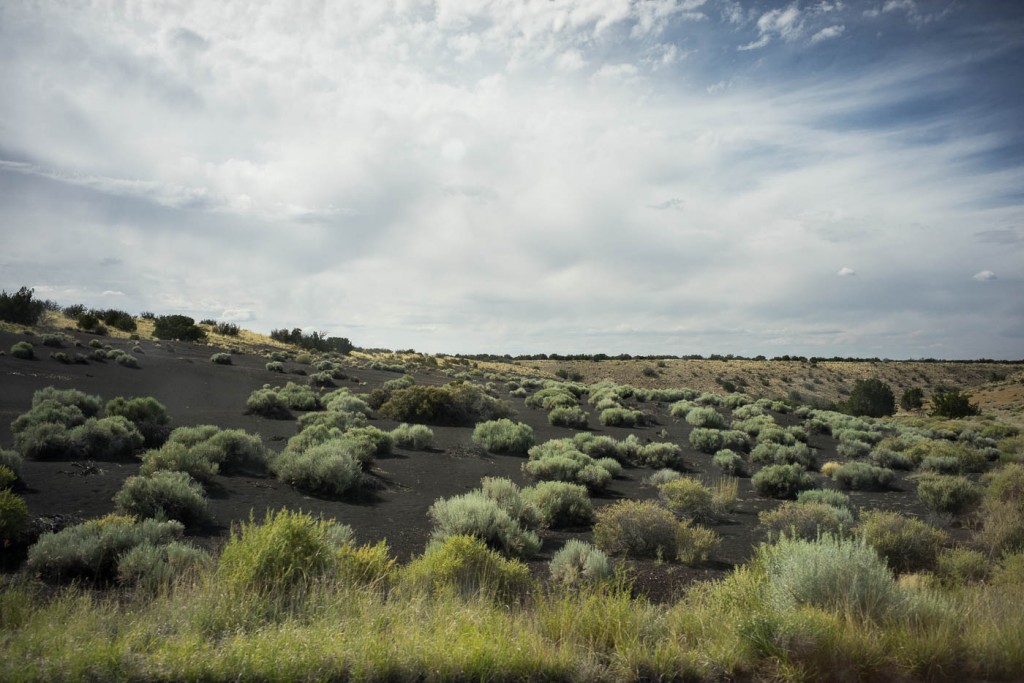 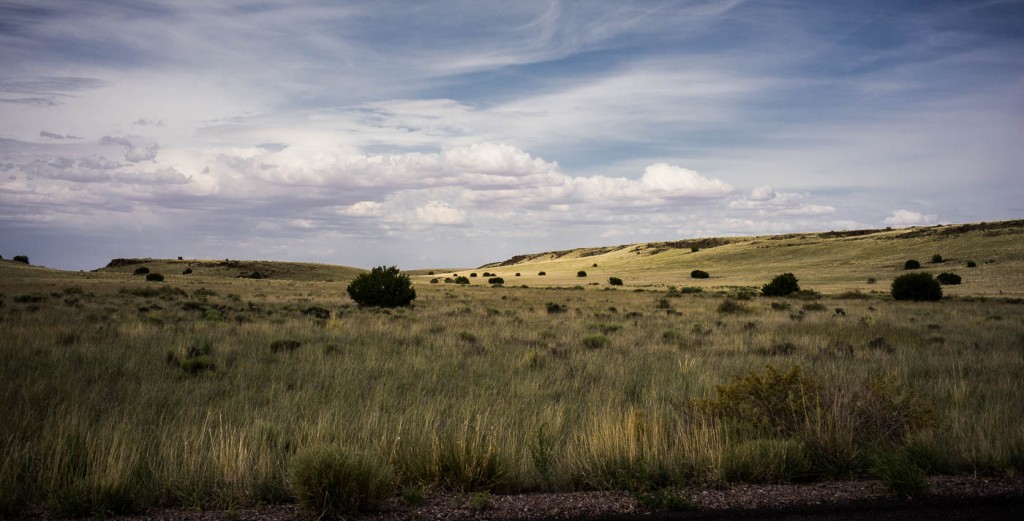 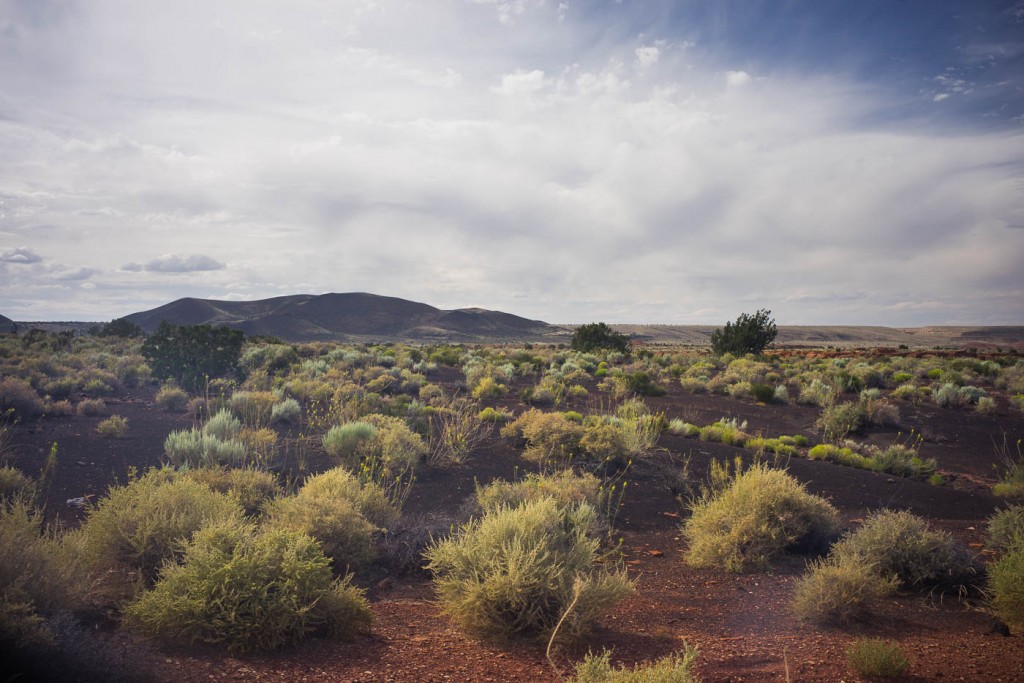 Wupatki National Monument itself is both very interesting and incredibly photogenic. With the notable exception of water, the place is so perfect you can easily understand what led 2000 people to congregate around this pueblo / citadel. 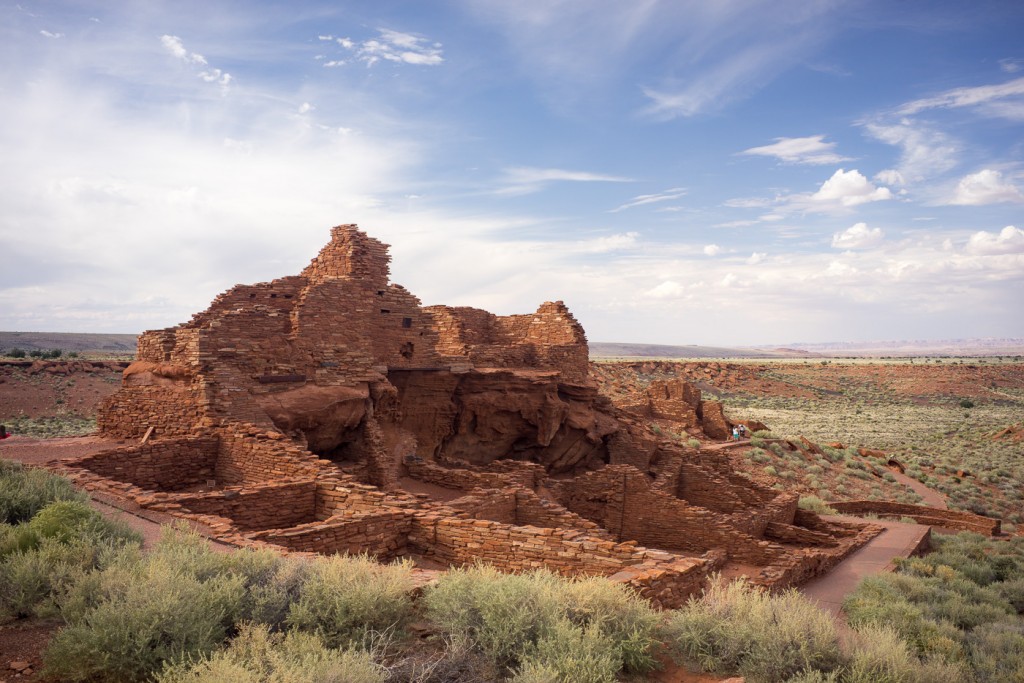 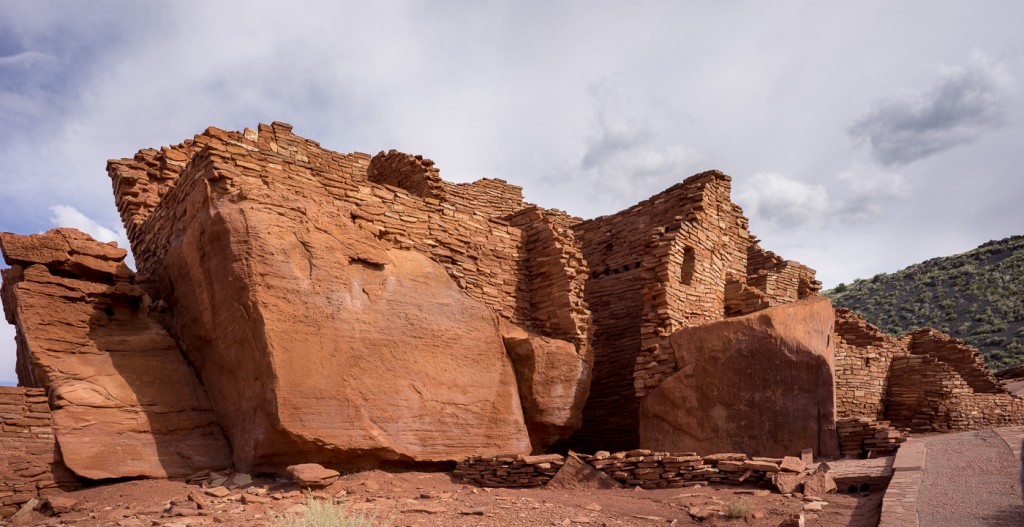 Second highlight on this beautiful loop is Sunset Crater, the remnants of a 900 year old volcano surrounded by lava fields and lush alpine vegetation. 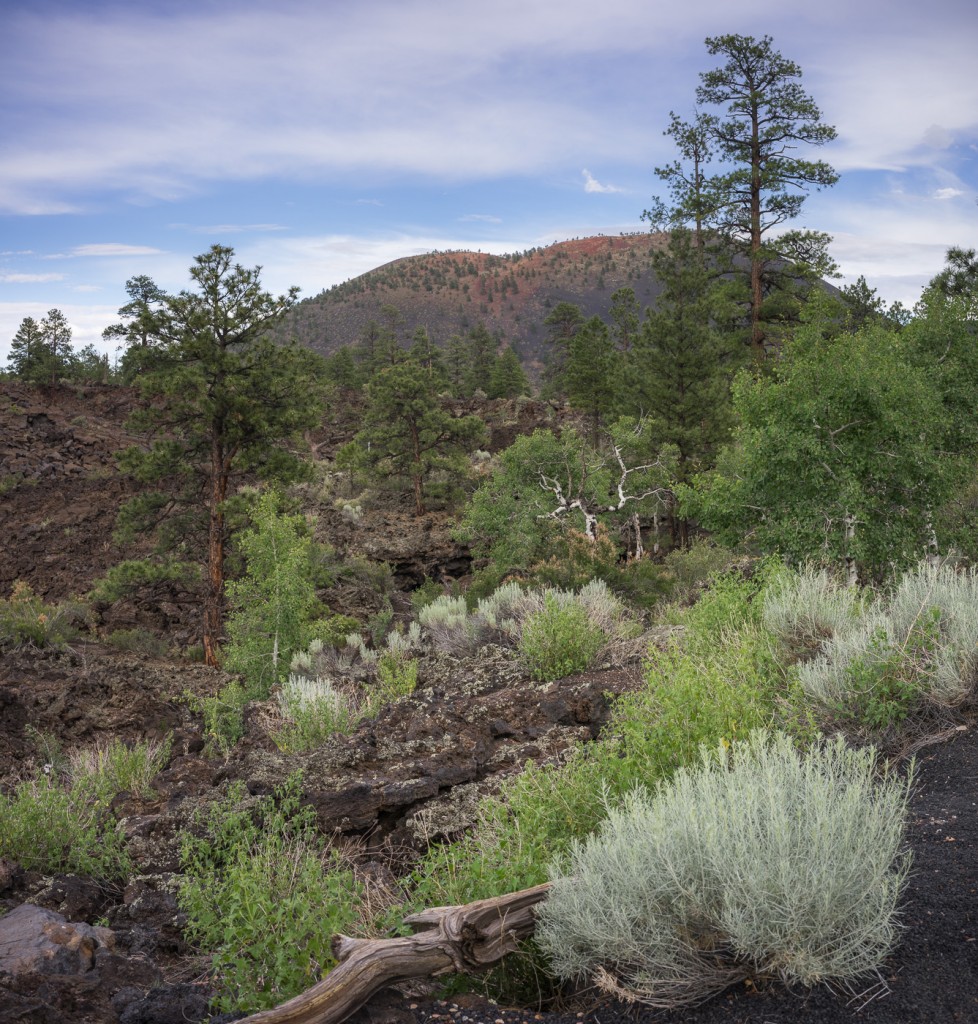 Lenses ! What lenses to bring ?

I used 15 / 35 and 85 during the day. But focal length isn’t the most important factor here. Most of the GC photographs presented here are 2 to 8 frame stitches. Even a 15mm lens cannot cover the span of some of the vistas.

What matters more here is contrast. In the wee hours, colours are lovely but very low contrast. You’ll need lens that’s full of zest to bring the colours to life. The Distagon 15/2.8 ZF2 used here (review coming soon) is a contrast monster with superb colours.

My beloved OTUS 85, on the other hand is much more muted by comparison and is wonderful once the sun is up, to control glare and blown highlights and preserve the earthy pastel tones that the harsh sunlight can quickly turn to nothing. 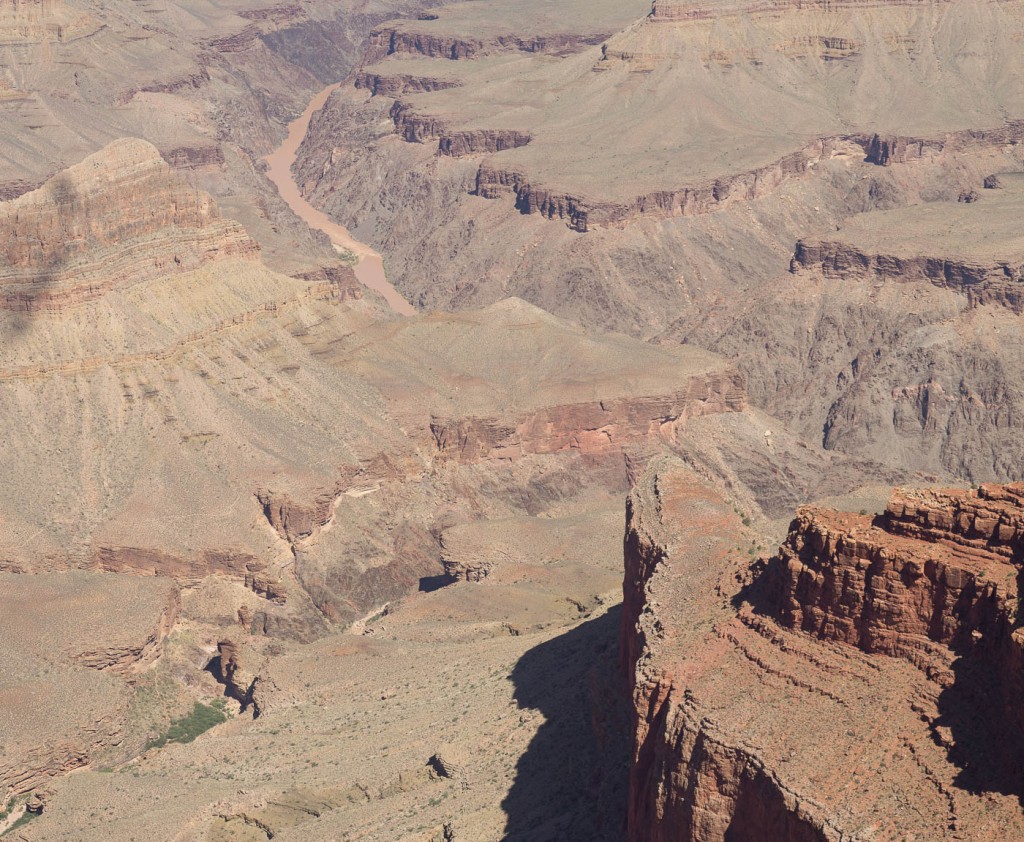 My 35 of choice was king-of-delicacy Distagon 1.4/35 ZM (codename Audrey) and proved invaluable when delicacy was the important quality. 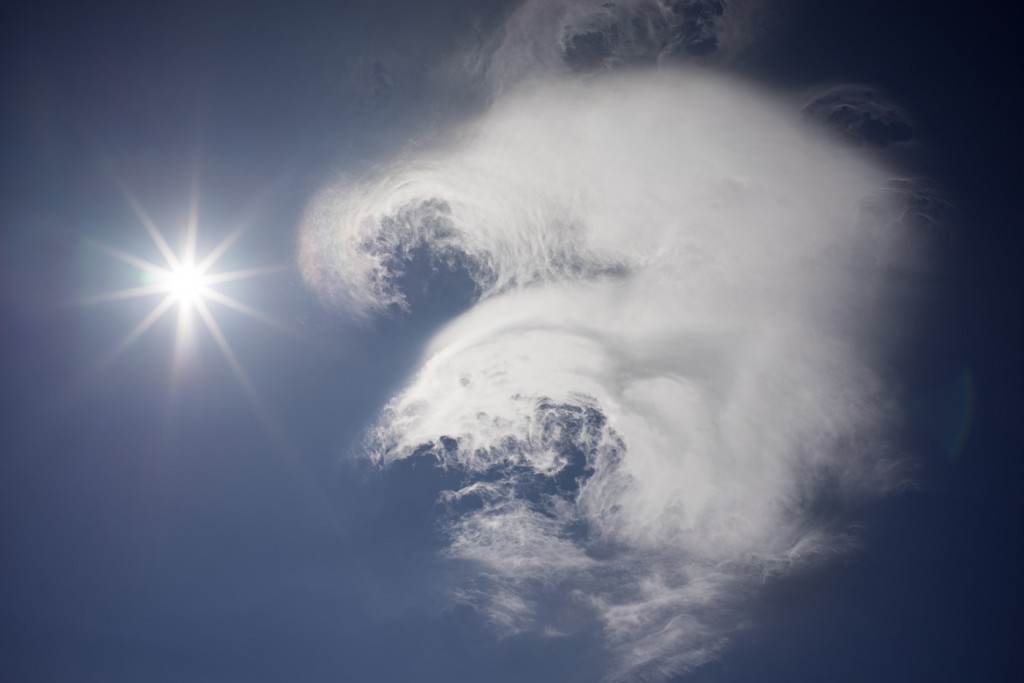 So, there you have it, one of the off the beaten track articles I had promised before leaving (grin). But I do have an off the beaten path secret up my sleeve. At Cameron, you can turn East rather than South … But that is story for another day.

Previous Post #376. Why DSLRs are deader than a doornail for top-quality photography Next Post #378. It’s dementia (of course)