#356. On location: The Sunny Streets of Marseilles

In recent weeks, I have become somewhat obsessed with the idea of a Leica Monochrom (M246). Paired with a Zeiss Distagon 35/1.4 ZM, the most natural, delicate and transparent lens I have ever used, bar none, it is simply mouth-watering for someone who’s main interest in photography is the interplay of light and matter.

Fortunately for me, I can’t afford it. That, and some discussions with co-author Paul about the bad rap the newcomer has been receiving from early buyers has put my mind to relative rest. Peace has returned to casa DS and harmony once again rules my universe. 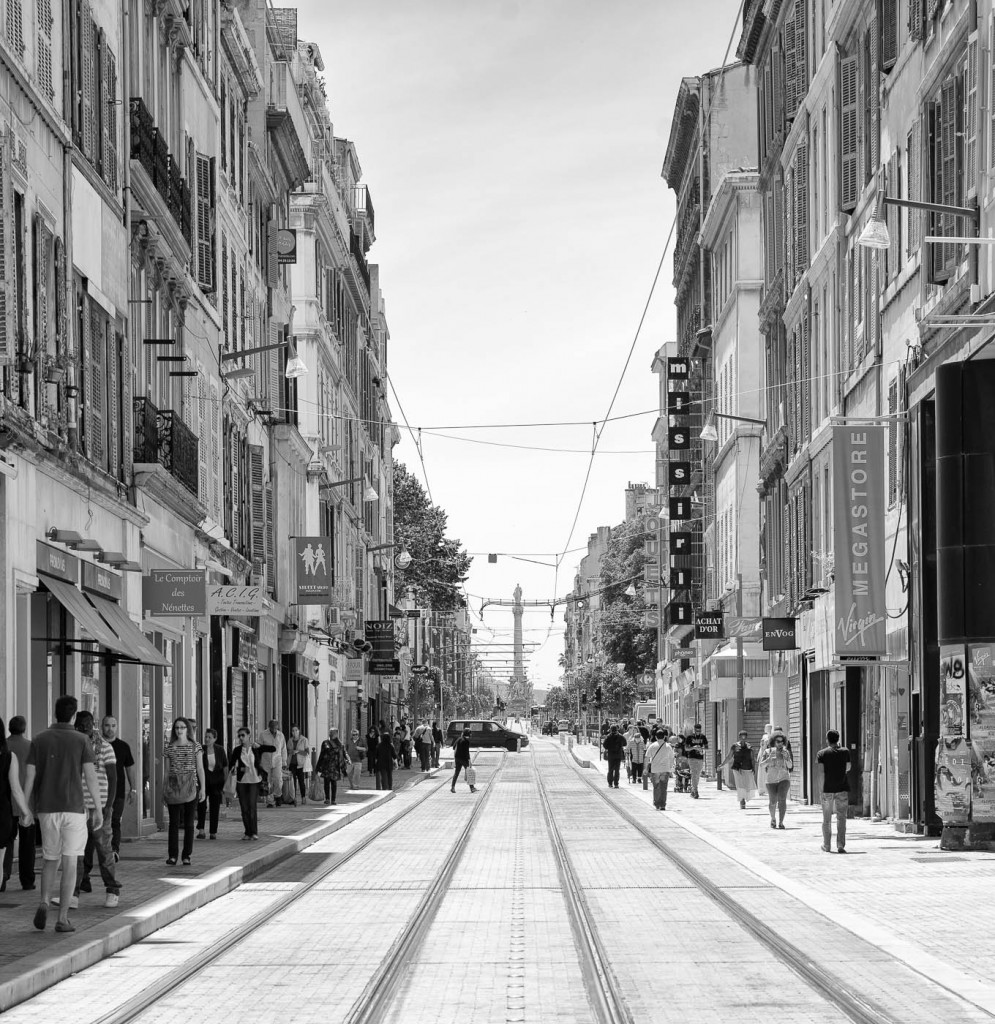 But, then, something unfortunate happened. Nick Devlin recently released a portfolio of Cuban photographs (Cuba No Color) that sent me into total relapse. The way his photographs grabbed to light in very diverse conditions simply sang to me and got my mind back into an M246 spin. 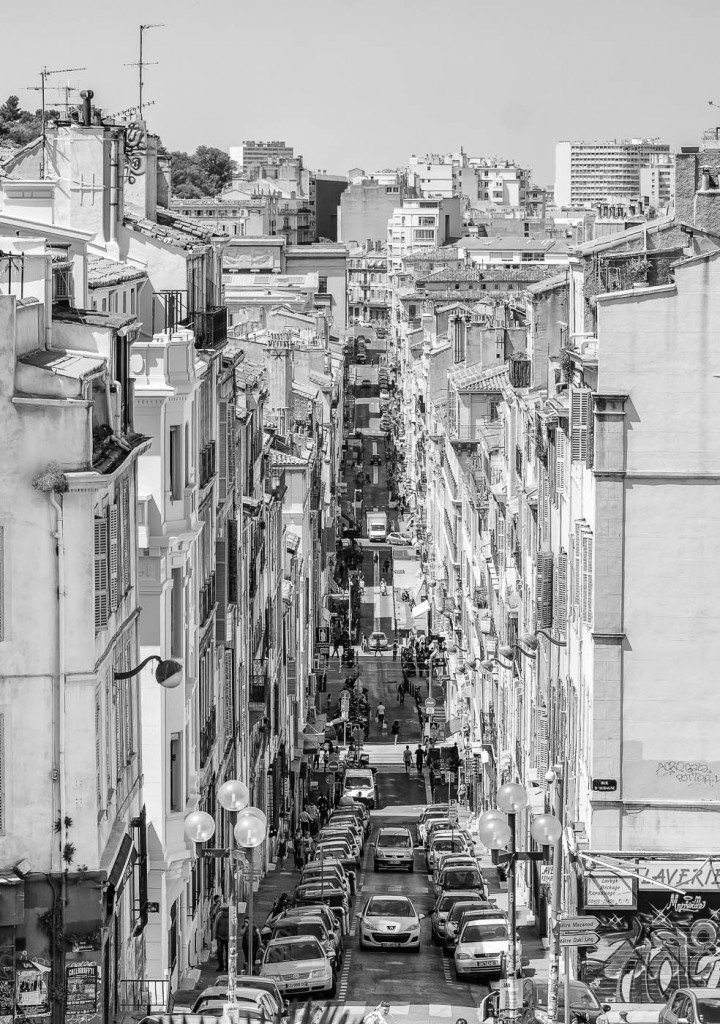 So, today, instead of sulking like a teenager, I decided to put the Sony A7r (and myself) to the test and try to produce a set of photographs that said more about light than about the location. Not to replicate Nick Devlin’s style but to let light play a dominant role in depicting the sense of a given place. 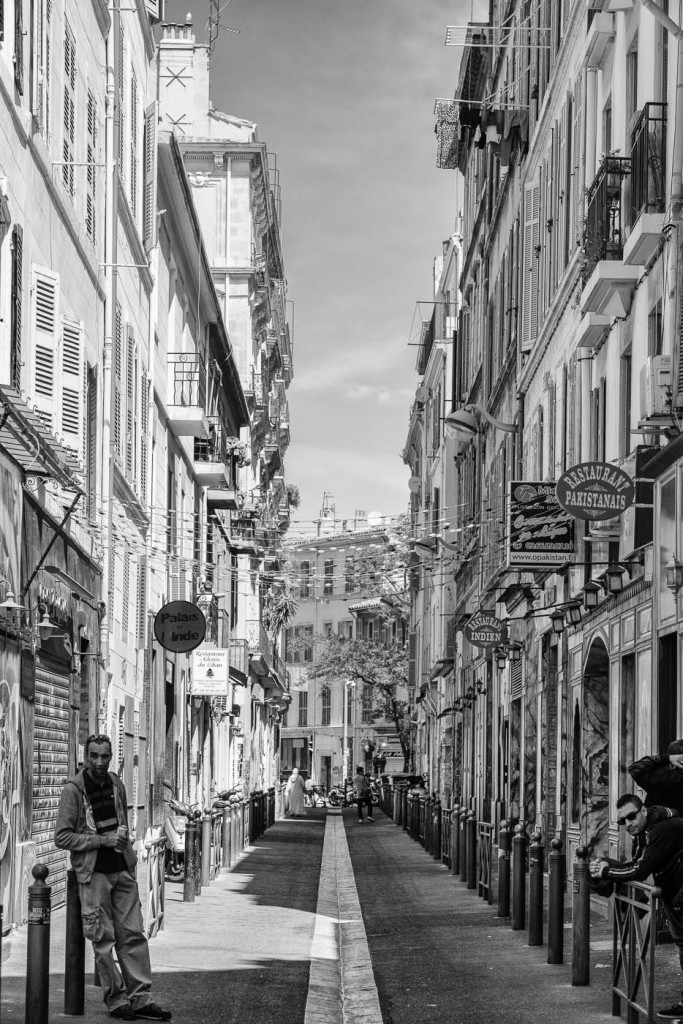 For the location, I chose a place I’ve been meaning to photograph for a very long time, one that responds to strong sunlight beautifully and which any photographer spending time in Provence would want to visit: the streets of Marseilles around the “old port” (Le Vieux Port). The day was very sunny and I chose to process the files in a slightly harsh manner to emphasise the summer feel. 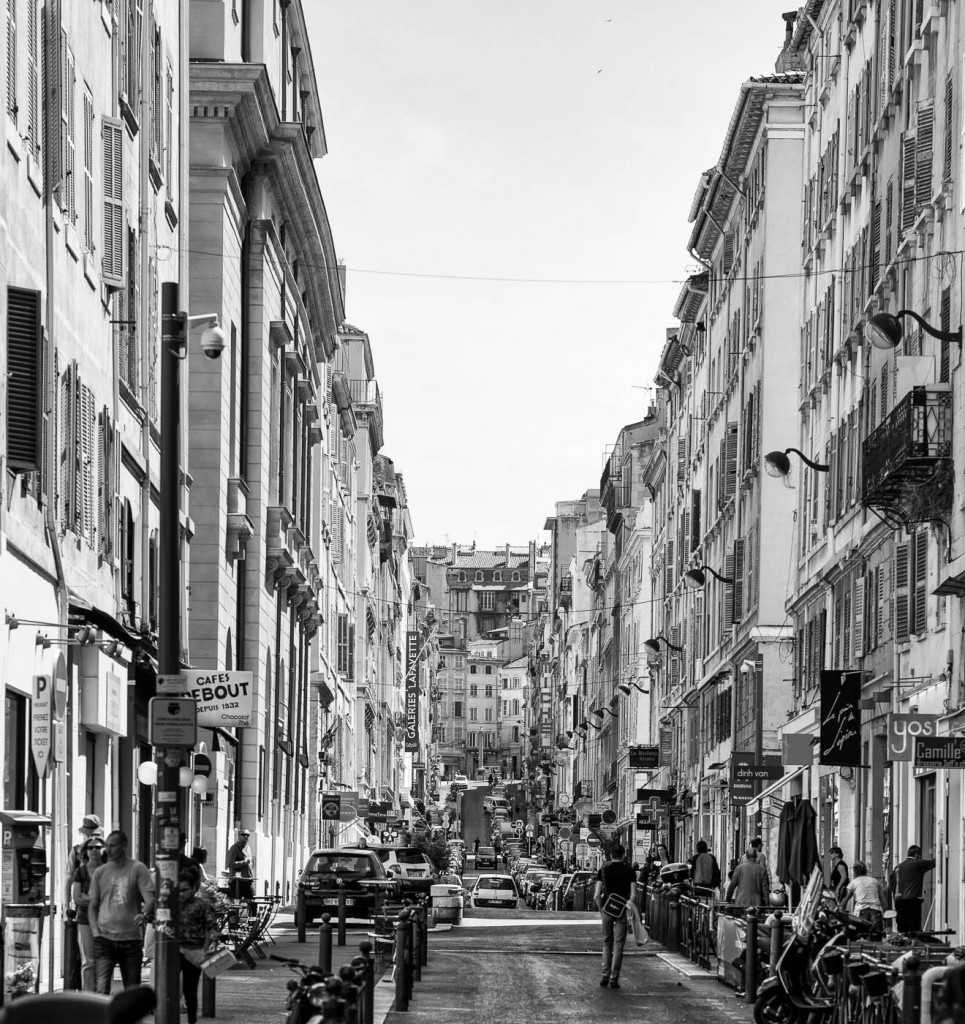 Also, it has been pointed out to me that, over the months, I may have described the OTUS 85 as a big softy. So it was time to show another aspect of its personality : the laser beam sharpness. As an example, the number plate of the car at the bottom of the hill (below) is 671 DK 13. Easy. Behind it, at about 11h o’clock, is a sign that looks like the figure of a man in a toga. Behind that is another tiny sign sticking out horizontally to the right (click to enlarge). That reads “Musée Cantini”. 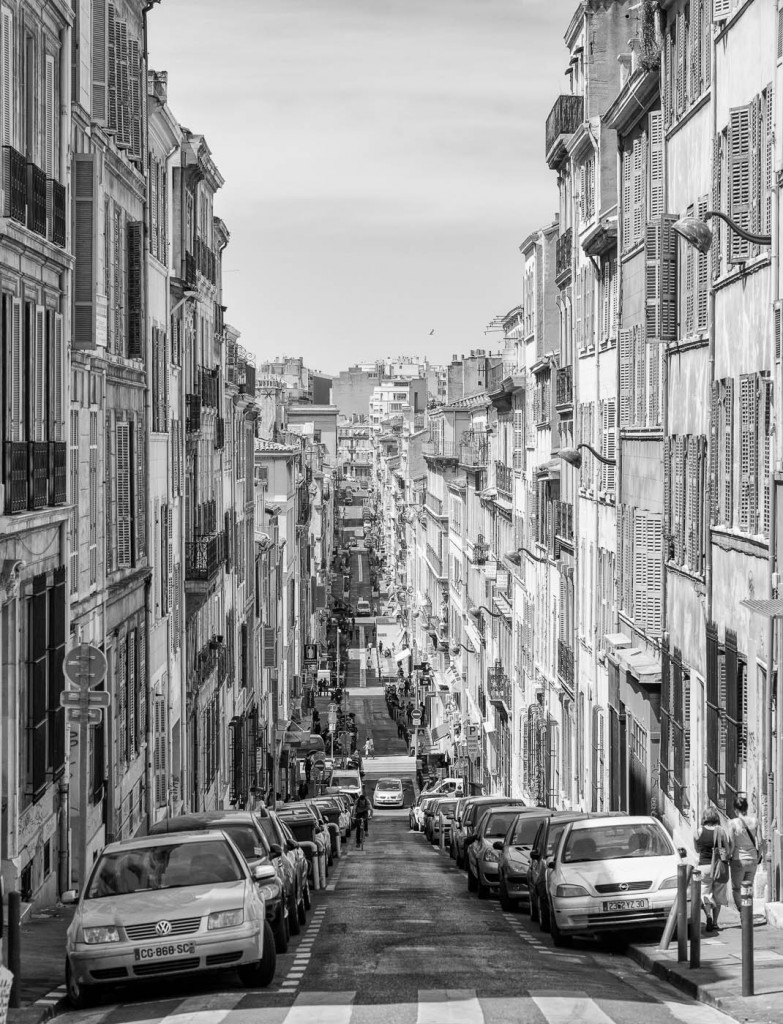 That sharpness is there even at f/1.4 but it is reduced to a plane as thick as fag paper. At f/8, the increased depth of field (and post processing) produce a Vieira da Silva effect on some of these perspective that I really enjoy. Not at all the style chosen by Nick Devlin for Cuba, but it suits Marseilles to a T.

But enough about sharpness. Back to more important things: the light.

In this series, I have tried to create the illusion of light falling from a very bright noon to an early evening. Just to see what the files have in them and how easy it is to create a mood. 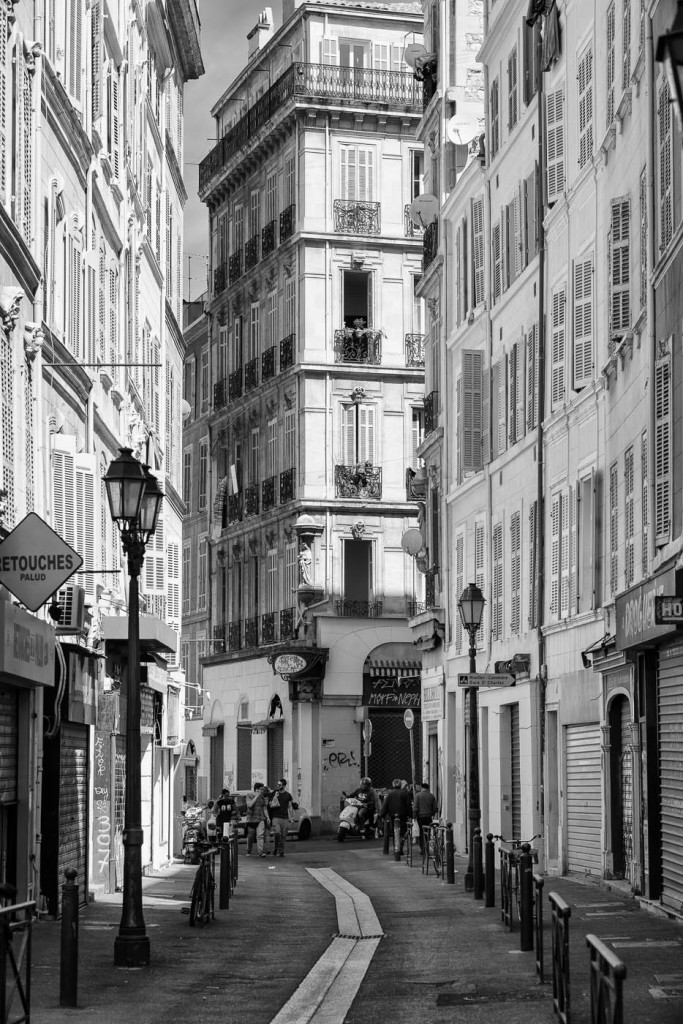 In reality, these photographs probably span 90-120 minutes around lunch time and lighting conditions changed very little in between shots. But it’s the hallmark of great gear to let the photographer decide of the final effect rather than see the mood dictated by the external conditions. Pros are often willing to return to a location until they get the look that sells. But we travel photographers are more interesting in making something interesting of what is available.

Hopefully, the final images in this series will also lay to rest the myth of Golden Hour photography. What may hold for a very specific recipe of (traditional English) landscape (very successful on the forums and 500px) doesn’t have to be an imposition on your creative life, particularly if you crave high contrast, textures and deep shadows. Which I think work very well in street photography. 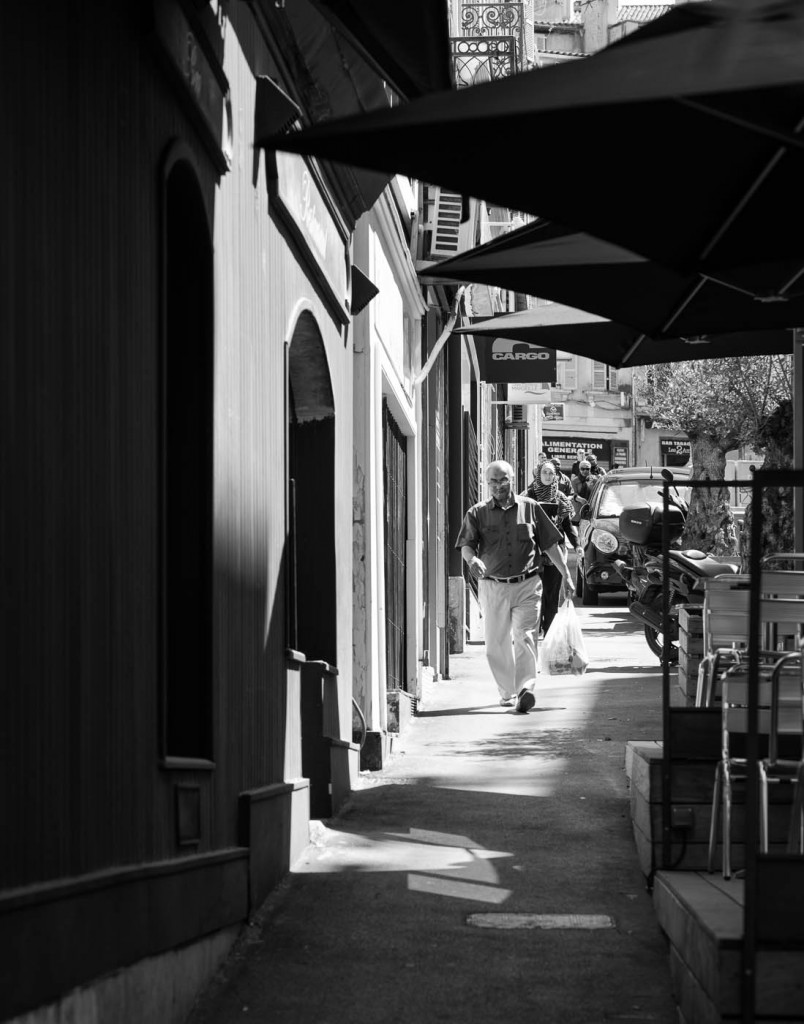 So there you have it, the Sony A7r trying to compete with the most recent B&W pure player from the boys in Wetzlar. What do you think ? Do any of these convey the sense of light like those that started my headache or must I wander in the desert in search of an M246 well ?

A little extra. Almost a cheat, I suppose, but the sort of overlay I find fascinating in some of Gerhard Richter’s abstracts. 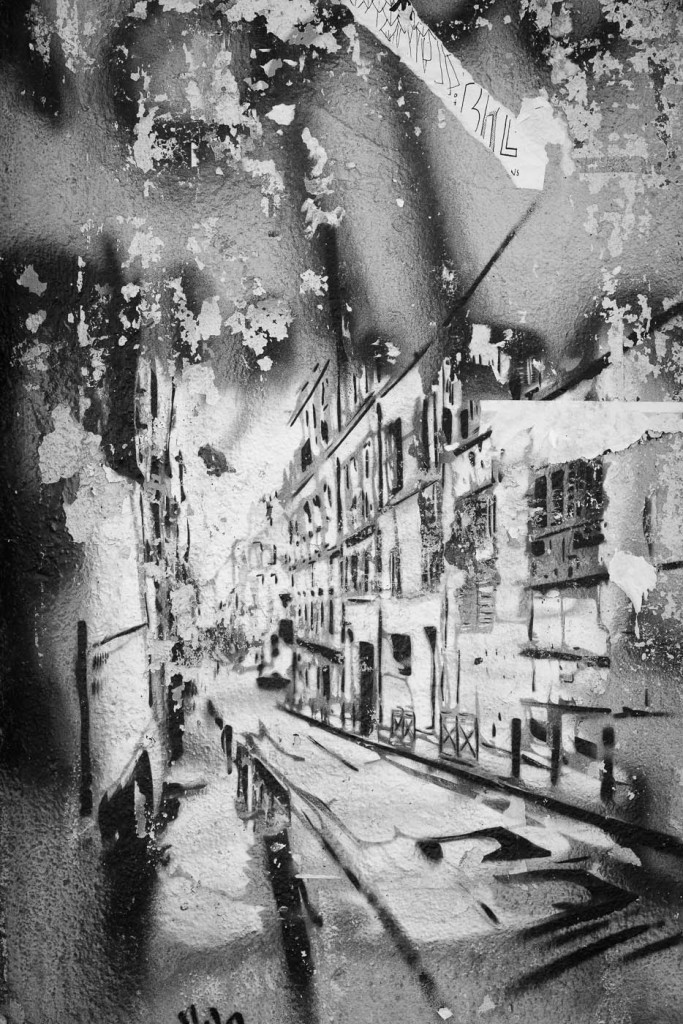 I’ll try to publish 2 or 3 more monochrome series showing different uses of ambient light, in the near future. But my next post from this area of Marseilles will be all about something the M246 struggles with: crazy colours. Be seing you.