Walking along the cliffs in the beautiful Provence village of Cassis a few weeks ago gave me the opportunity to make a series of exposures of a same subject with the sun gradually lower over the horizon to show and describe the changes in hues you can expect in these conditions.

As an unexpected guest, the full moon rose behind the Cap Canaille, one of Europe’s highest cliffs and cape.

Cap Canaille in the background

In the first photograph above, we have about 30 minutes before sunset.

Light in the at the beginning of the “Golden Hour” is still quite harsh when the air is clean (as it was on this very windy day). It makes colours very vivid and casts a yellow hue over the scene. 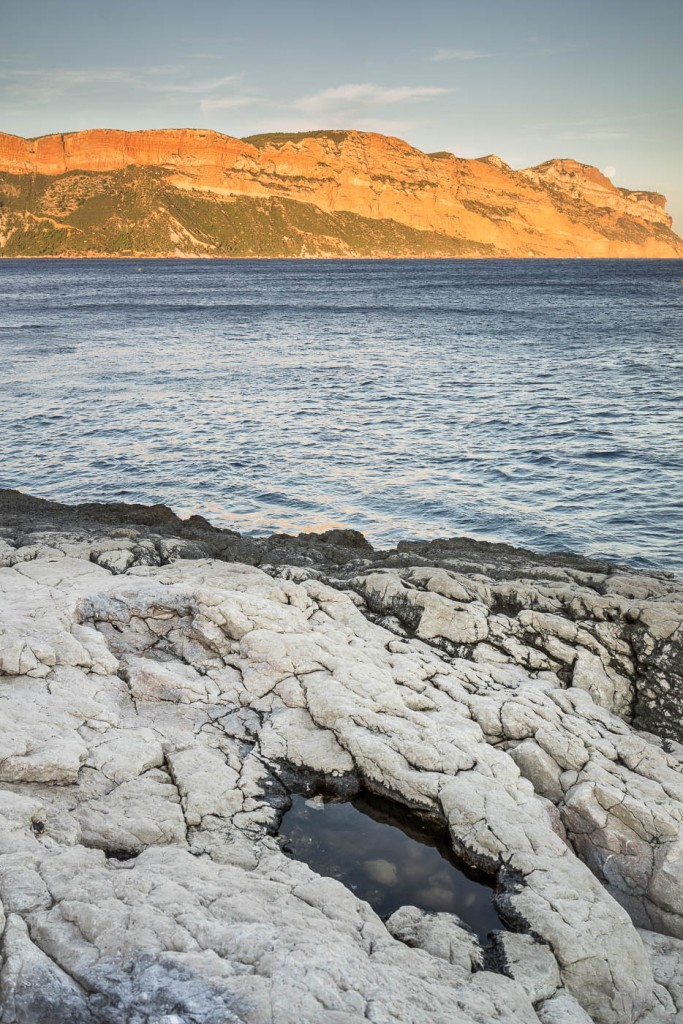 As the sun gets lower, the light becomes a little more orange and softer. The sky above and opposite the sun is a deep blue. In the photograph above, I have made the foreground much lighter. It was quite dark in the shadow. I also increased clarity on the foreground to give it more presence and texture. This reinforces the 3D effect by making the cape appear slightly less sharp. 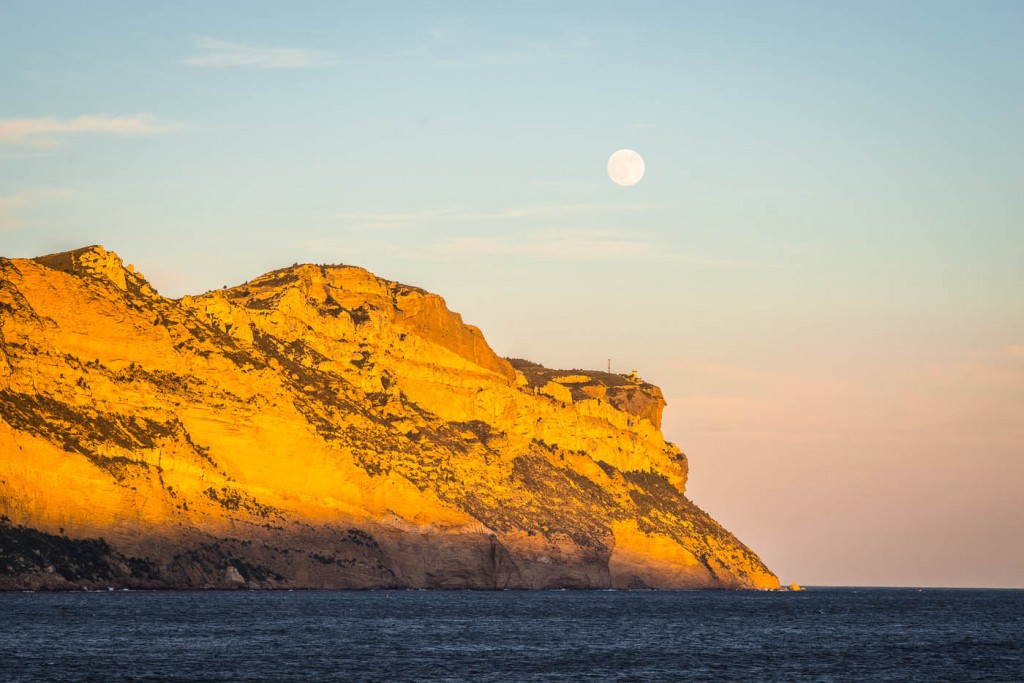 At this point, with the sun almost setting, the tint is now a deep orange and much softer. The sky is almost pure blue. In the photograph above, I have increased the contrast significantly, which has made the rock face and sky lighter.

Finally, with the sun below the horizon, the light becomes much softer and less saturated. The last drops of sunlight are visible at the top of the cape and if I had waited a another 30 minutes, a blue-grey cast would have set on the scene becoming more blue as night set (see how much more grey the sky and cliff already are).

Side note unrelated to hues: this time of day allows long exposures that blur the surface of the water and produces a thin mist on the sea. I opted for a very short exposure to freeze the imprint of the wind on the sea. These surface movements were fast and ten frames in as many seconds would have been very different from one another. 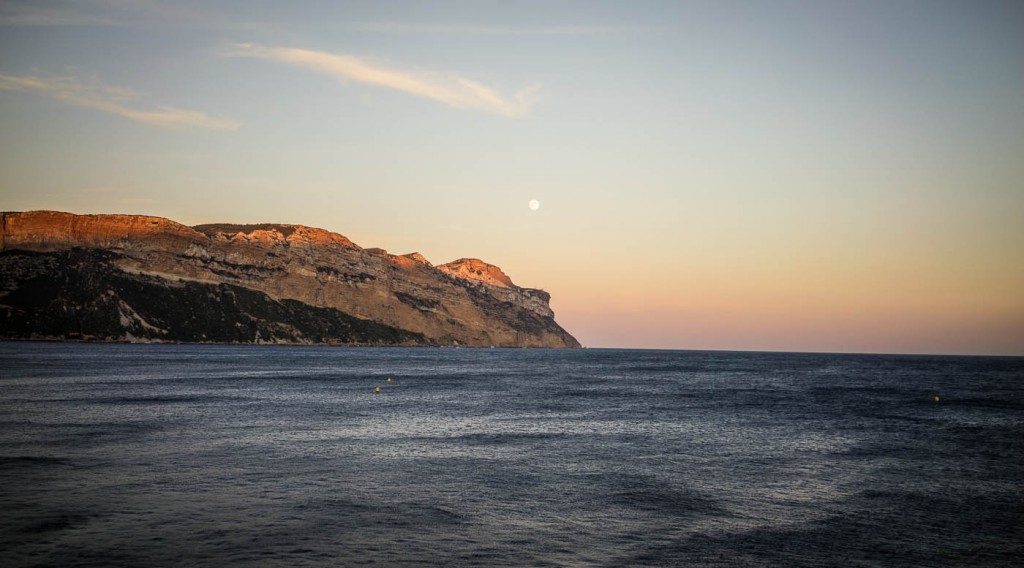 By the sea, this time of day reveals a rainbow-like palette of colours along the horizon. You can see these in the photos above and below, as well as in the cover photograph of this evening shoot in Marseilles.

The cliffs at Cassis

This is also the time when the sun ligts the clouds from below, giving us spectacular colors, as in the photograph below made near Margaret River, Western Australia. Glorious sunset colors indeed. 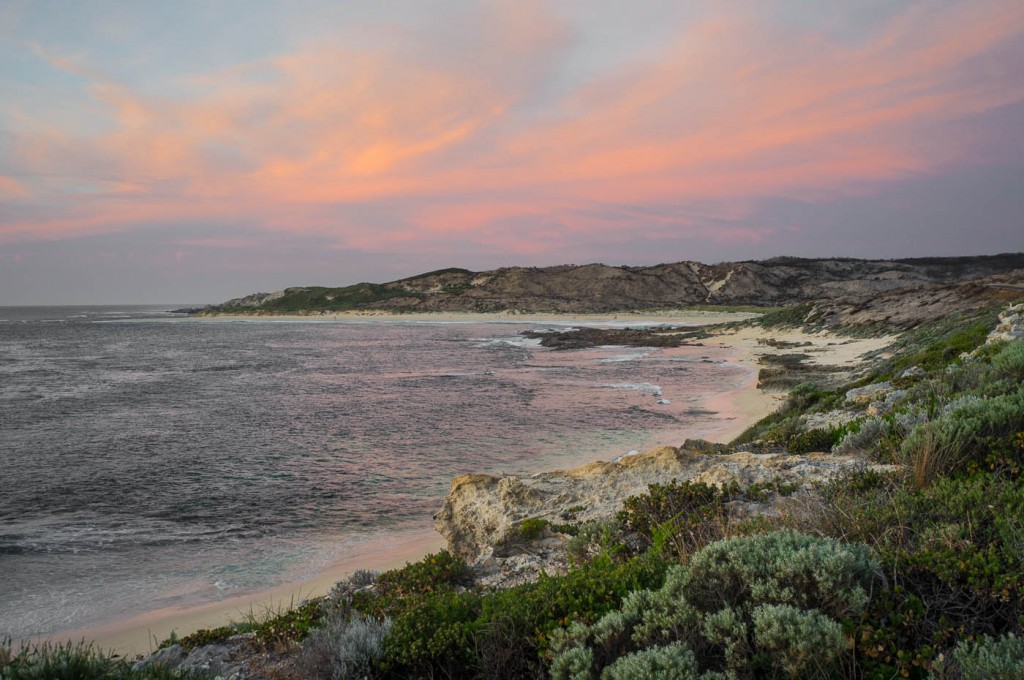