This was our first warning. The sound of sirens and rotations of a chopper made us look for signs of smoke or worry about a serious road accident. 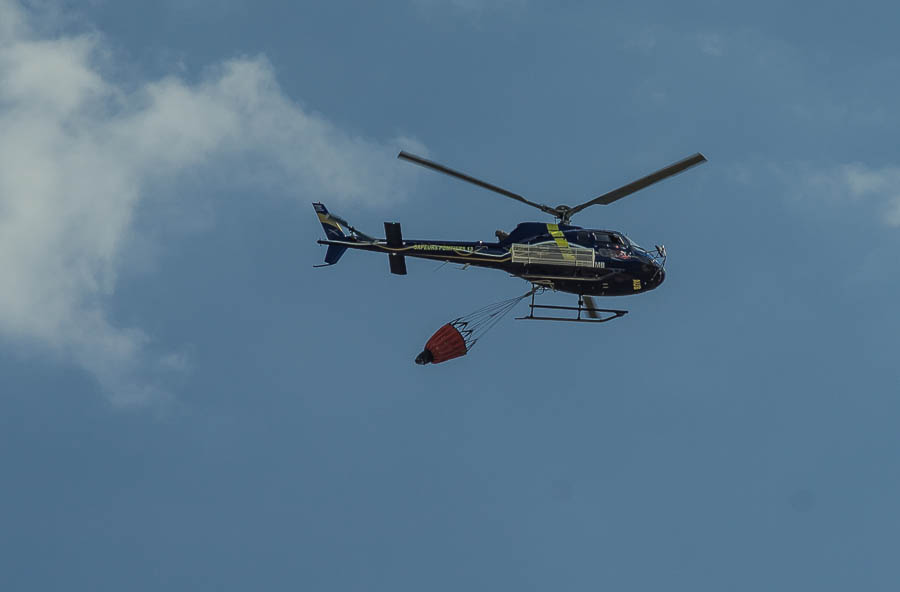 Both wild fires and road casualties are unfortunately a regular part of life in this neck of the woods. 4 years ago a huge fire stated in a nearby hill and grew large enough to be visible 25 miles away. It ate at thousands of acres our forests and took a few homes as well.

A quick look at the chopper’s belly and thick smoke to the East quickly dispelled any doubt about the reason behind the racket. The forest on fire, again ! 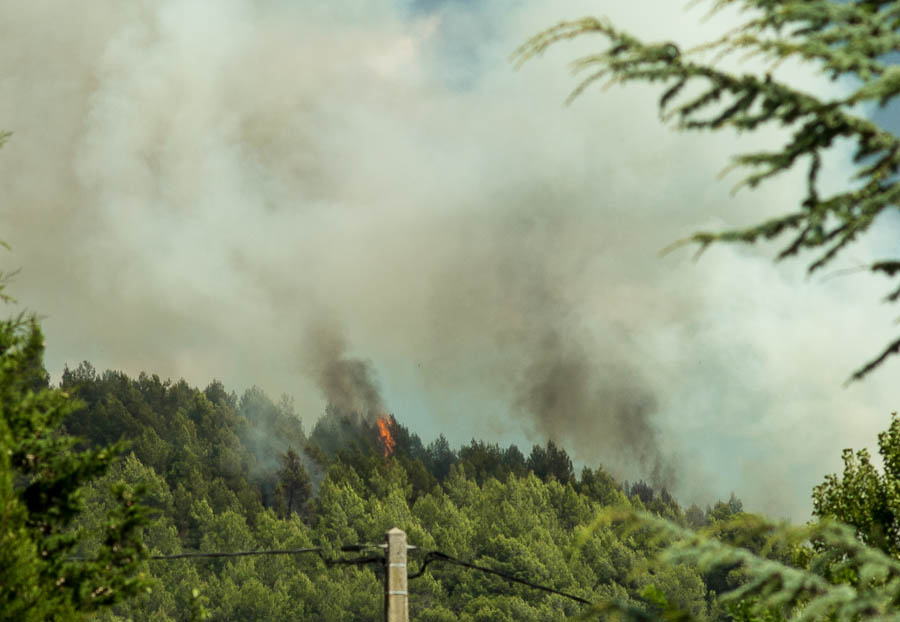 From our windows, the flames didn’t look impressive but these are 30-40 feet-tall trees and size is deceptive at those distances (about half a kilometer). For the best part of an hour, a ballet of three helicopters collected water from nearby pools and dedicated basins.This slowed progress and avoided the worst, but it soon became obvious reinforcement would be needed to stop the flames before nightfall. 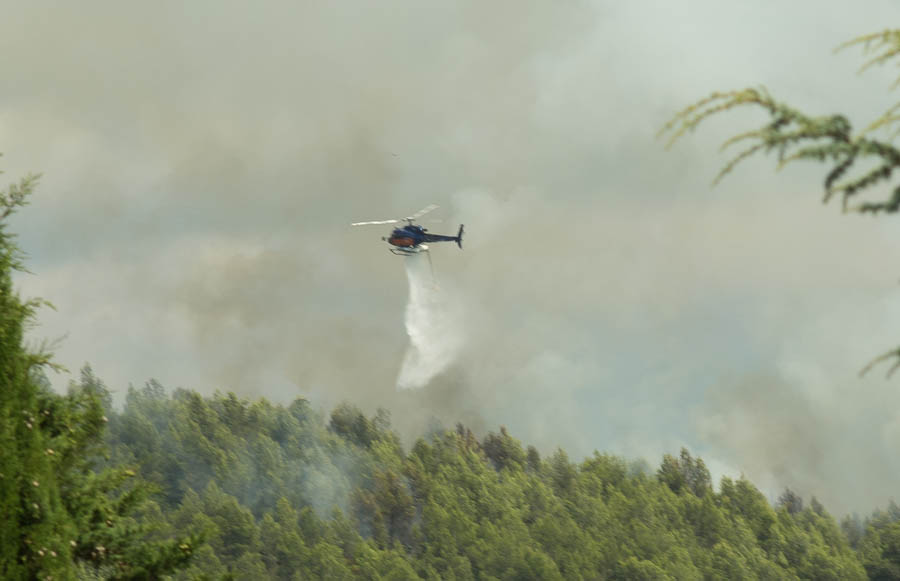 As firemen got ready around the central area, three Canadair firefighting planes arrived in formation, soon followed by a fourth. While that upped the decibel significantly, it also brought waves of relief to those who had suffered from the last episode a few years later.

Expecting Skype calls from work, I couldn’t leave home to get a better angle but my 90mm Elmarit-M was perfect to capture the global progression from my office window.

And what a spectacle ! 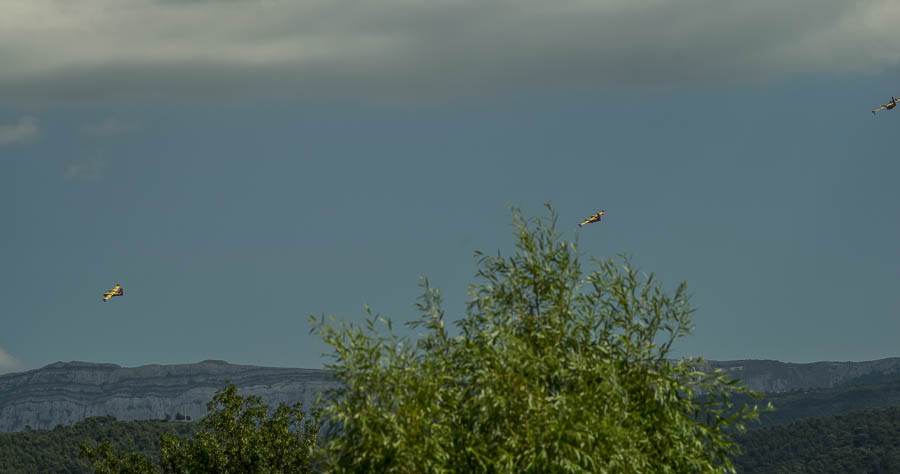 Knowing this would be over soon, onlookers were grabbing pictures from every house and balcony in the vicinity. The acrobatics of these large planes has to be seen to be fully apprehended. The photograph below shows the head pilot approaching barely a few meters above the treeline in one of his observation passages. Neither the camera, lens of focus are faulty. Heat waves are distorting the image. Knowing just how much cross winds can wreak havoc with trajectories in light aircraft, it amazes me that these pilots are able to navigate accurately through the fierce currents, smoke and flames. 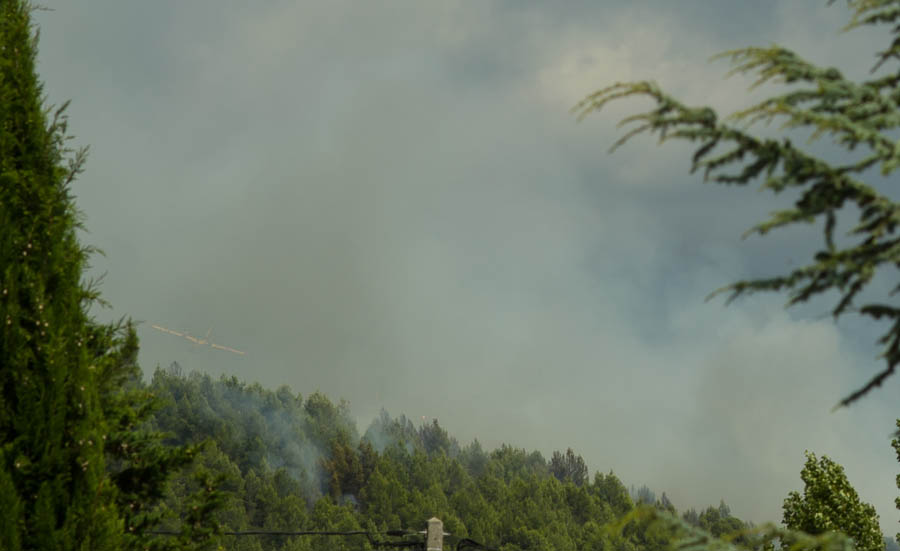 Satisfied that they had successfully located the heart of the fire, the 4 planes started pouring their liquid cargo over the area surrounding the fire, then on the fire itself, in 4 passages. 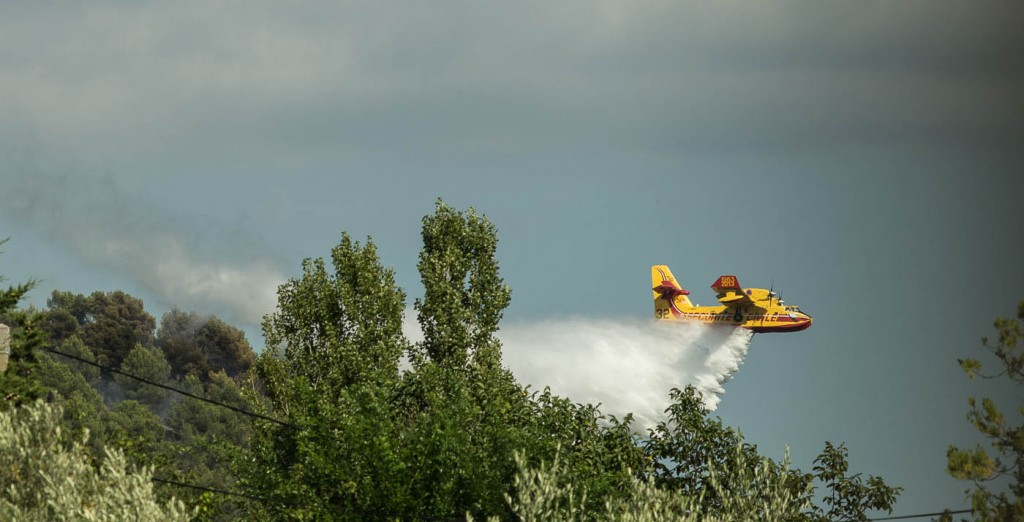 One hour later, it was all over, leaving fire engines on the ground with the task of monitoring the forest and preventing new outbursts.

It was fascinating to watch the Canadair work their miracle. All 4 pilots flew differently above the flames but, passage after passage, each displayed consistent tactics and trajectories. 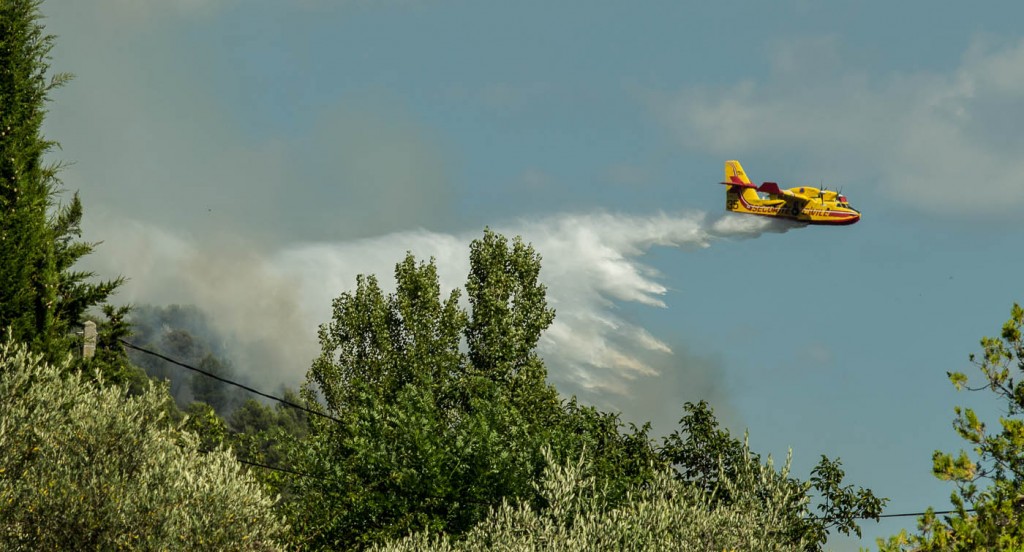 These close-ups are 100% enlargements of photographs made with the Sony A7r and Leica Elmarit-M 90/2.8, the longest lens available to me at the time. It is a times like this that I regret not owning one of these fat white cylinders full of heavy glass that make other photographers drool. Luckily, that doesn’t happen often, so I’ll stick to my puny focal lengths, thank you very much 😉 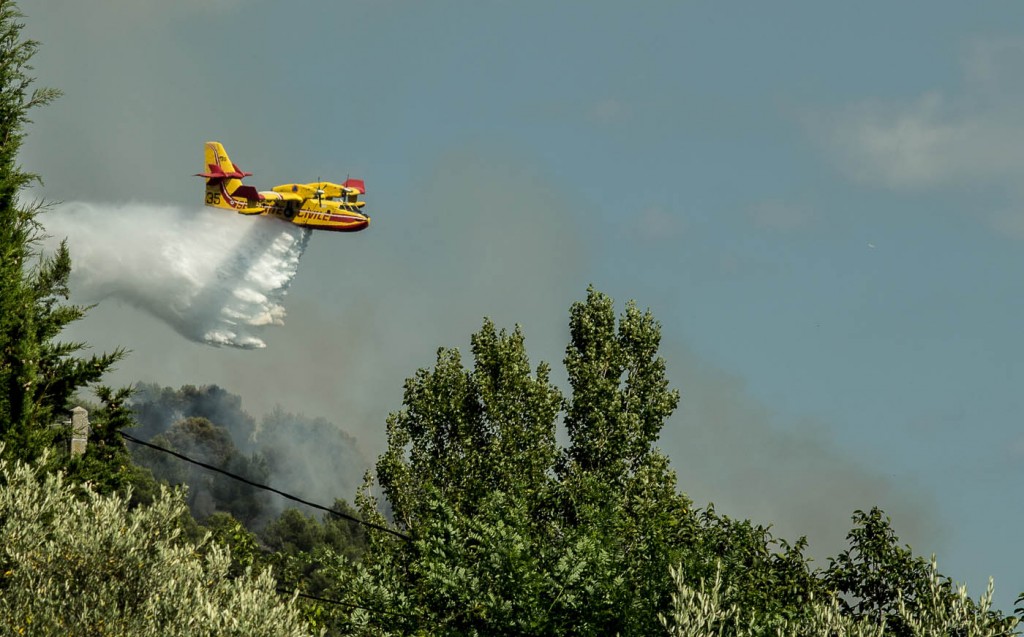 Show over, the 4th Canadair left alone, as it had arrived. 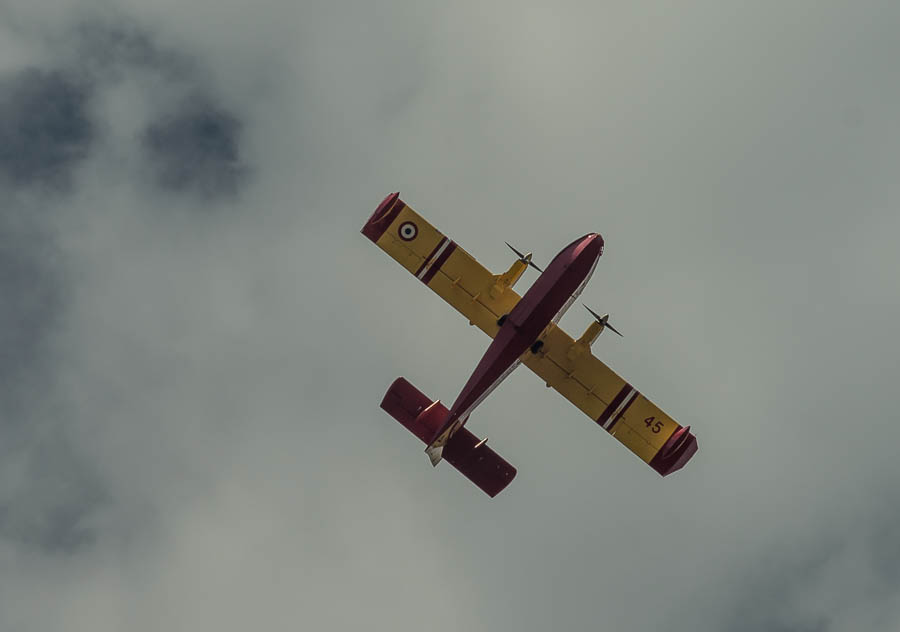 And the initial trio flew out into the horizon under (or rather, over) the applause from the locals of myself. It is doubtful they heard or saw any of us, but red (and yellow) leader, waved on exist. It’s a shame to have to lose precious greenery to watch these guys in action.

But, if you’re interested and staying near Marseilles, you can go and see them train on the Etang de Berre, on the Western side of Marseilles airport (Marseille Provence). Definitely worth your while. 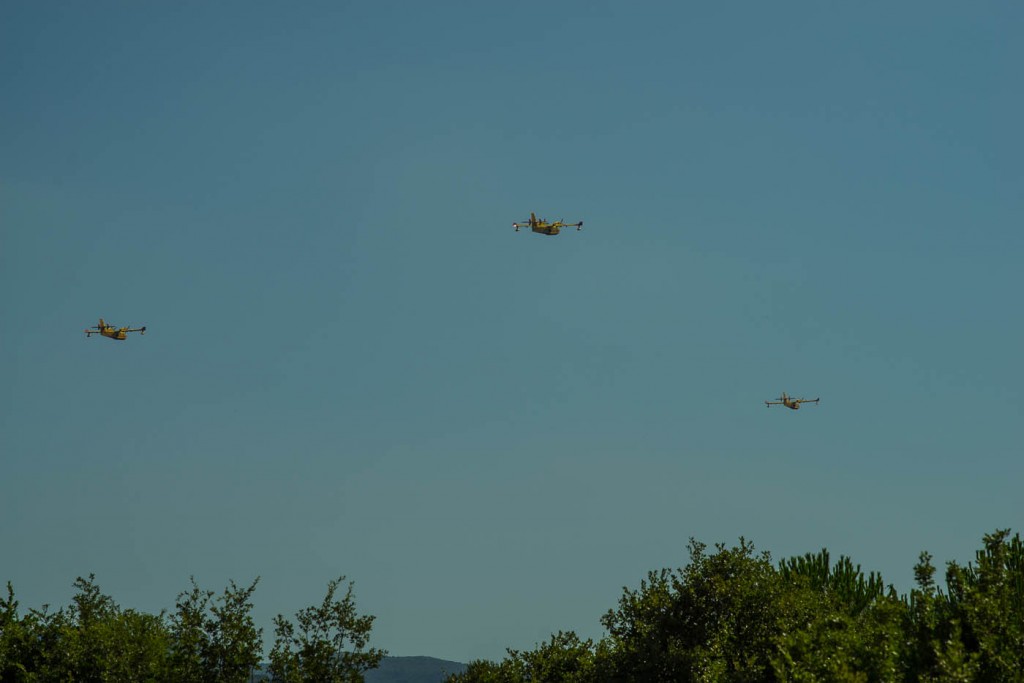