#271. Fontainhas – the Old Portuguese Quarter of Goa: Homes and Streets

Goa has really only two seasons: the hot balmy summer months and the warm monsoon months in mid-year, the latter often exacerbated by an incredible level of humidity in the lead up period. Monsoons can be sketchy, and vary widely from year to year. You may encounter a few showers a day for a month, or a tropical downpour of irresistible force – rain so heavy it is painful to walk in.

Nearby Bombay – which shares Goa’s climate – recently received over 900mm in a 24 hour period, killing scores of people. 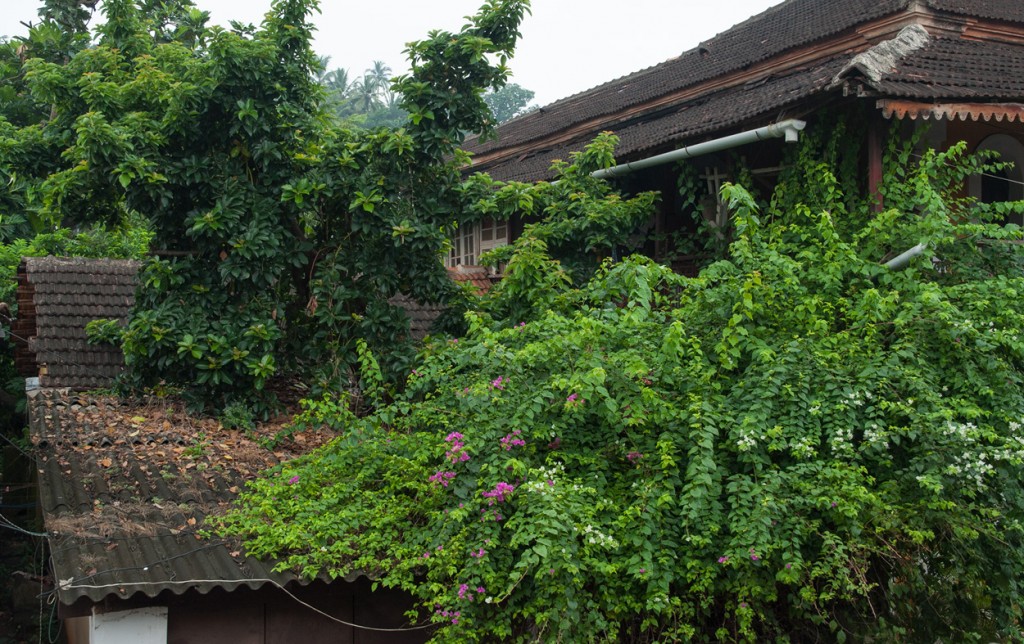 The upper storey of an old mansion becoming overgrown during the monsoon.

Goa is blessed with extraordinarily rich soil which combines with the climate to promote an amazing array of plant life – shrubs, flowers and mould. Soil formation proceeds apace, to the extent that untended residences sprout healthy growth of grasses and even trees – on rooftops! 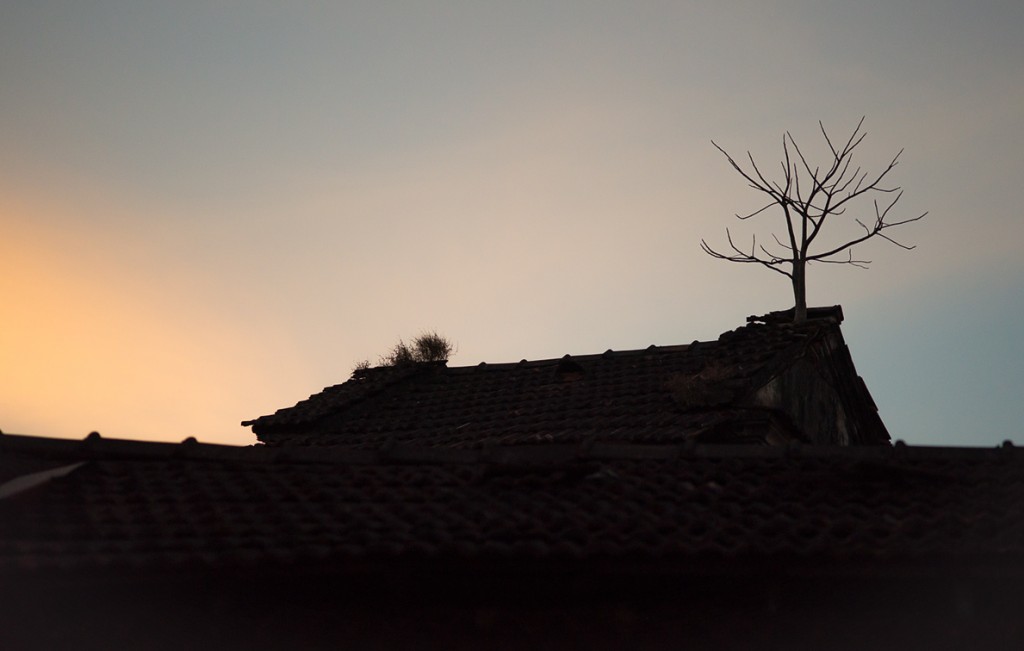 In downtown Fontainhas, an old mansion is sprouting grasses and trees.

Buildings require annual ‘servicing’ in the form of whitewashing. The rainy season exacts a toll by turning external surfaces an unsightly black which, in the eyes of a sympathetic observer, contributes greatly to the seedy otherness of the township.

For much of the year a heavy, cloying sea mist settles over the hillside, as thick as fog. It must have been quite an experience for the weary Portuguese seafarers sailing up the Mandovi, back in the times of Vasco da Gama. 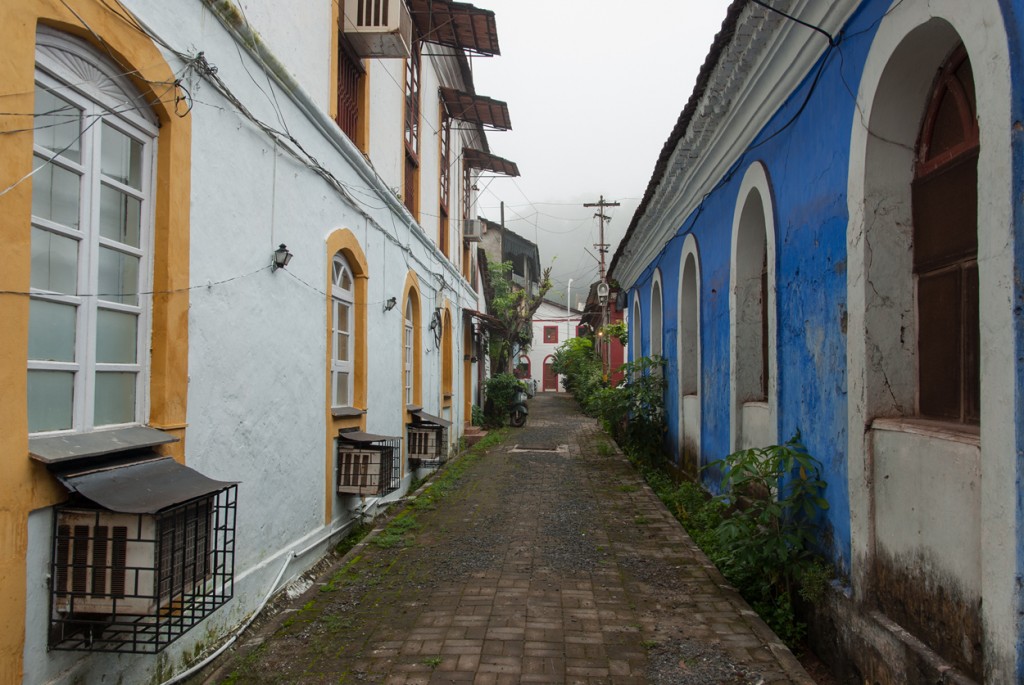 There are two truly magical times of day for photographers in Goa – from dawn until the sun gathers strength; and the hour before dusk leading into the onset of darkness. The first shift is made easier by the coolness spread by the river and the lack of motorised and foot traffic, and is enhanced by the gathering of worshippers in the town’s churches, small and large. 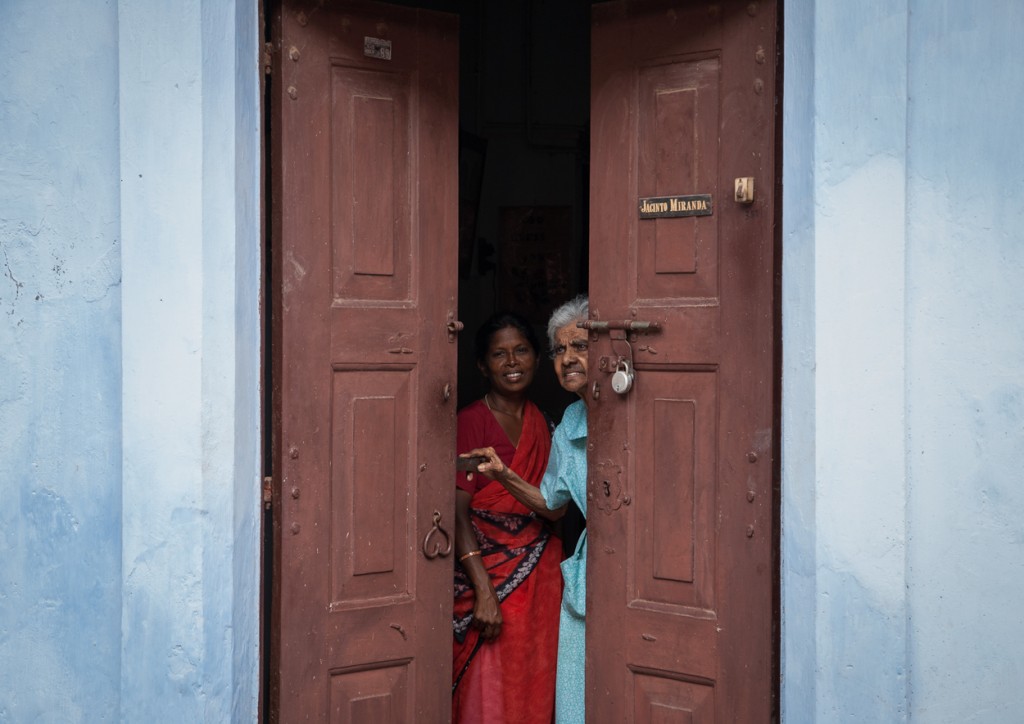 Near dark – the citizens move outside to meet with neighbours and friends.

The monsoon is one of the best times to visit despite the difficulties it poses.

The Konkan Railway – the rail link to Bombay – may be disrupted for days at a time but even this can be a blessing in disguise as the seldom used inland route is then used by passenger trains; this line crosses Goa’s major waterfall, Dudhsagar Falls (310 metres high), as it drains the escarpment. The train by necessity crawls at snail’s pace, rocking like a cradle as it traverses the cliffside in the early morning – the sound is deafening from the thick curtain of water cascading down. 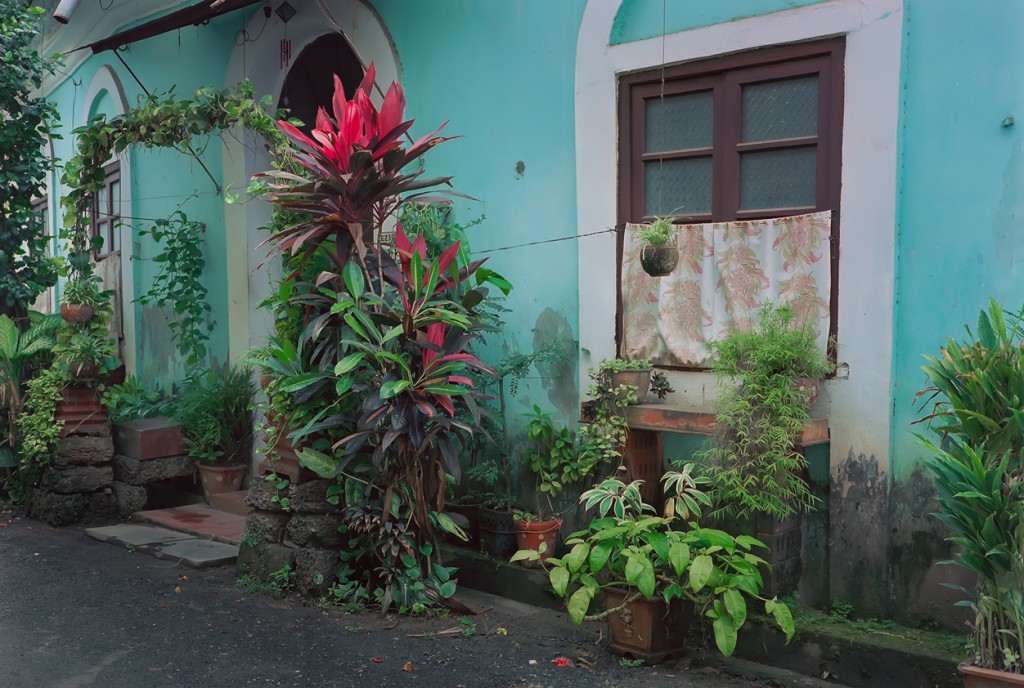 Goans love to adorn their houses with tropical plants 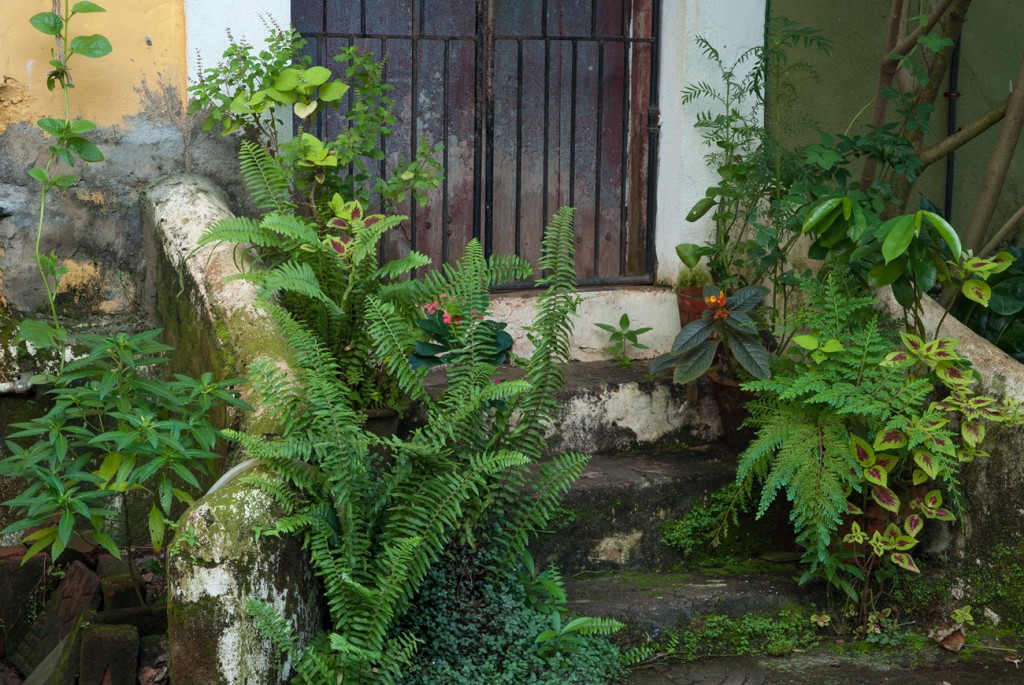 Plants grow from pots as vines; from drains; and as mosses and ground cover.

Plant life forms the connection between dwellings and the streets, even in the more sanitised environs of the town.

Of special note to photographers, the only real drawback in Panjim is the blight of motorised traffic, not that Goa has this aspect of life to itself – India is the most dangerous country in the world to drive a motor vehicle, some 200,000 people now lose their lives on the roads each year – take care! The society is still emerging from the days of narrow tracks full of bicycles and pedestrian traffic. 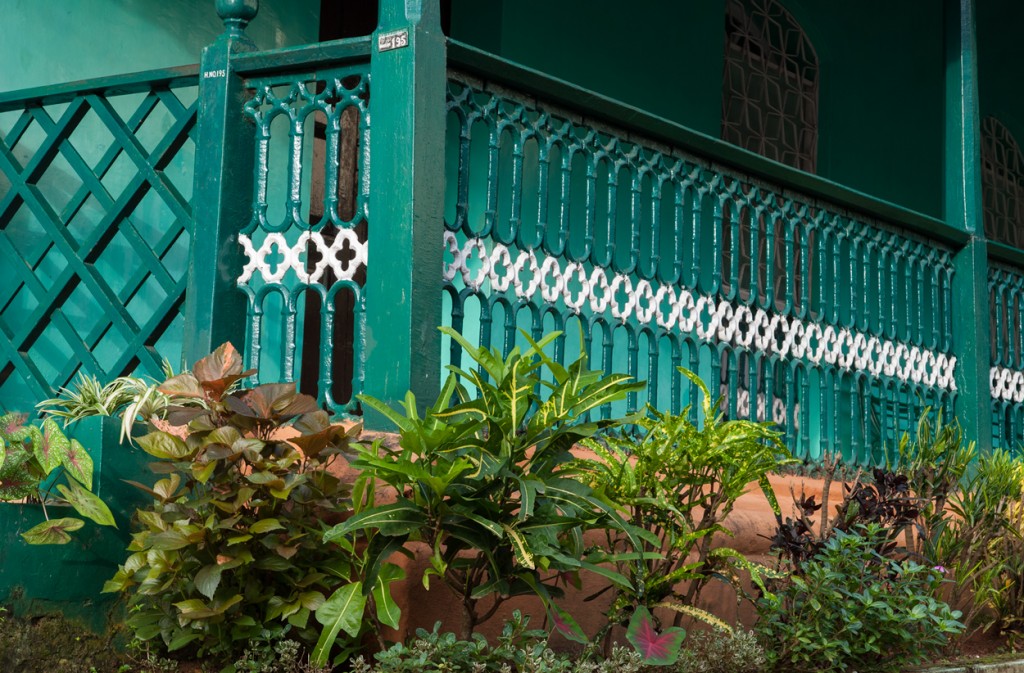 An orderly garden and fresh paint make No 195 a liquid spectacle.

Goa has long occupied a special place in the India backpacker circuit – road-worn travellers burned out by the travails of life in India worked out how to fit in visits to oases like Goa and Kerala to help them rejuvenate enough to re-enter the fray. Goa is a Xmas time destination along with  Rajasthan and the Gangetic attractions like Varanasi; mid year is best spent in hill stations which are found north and south. 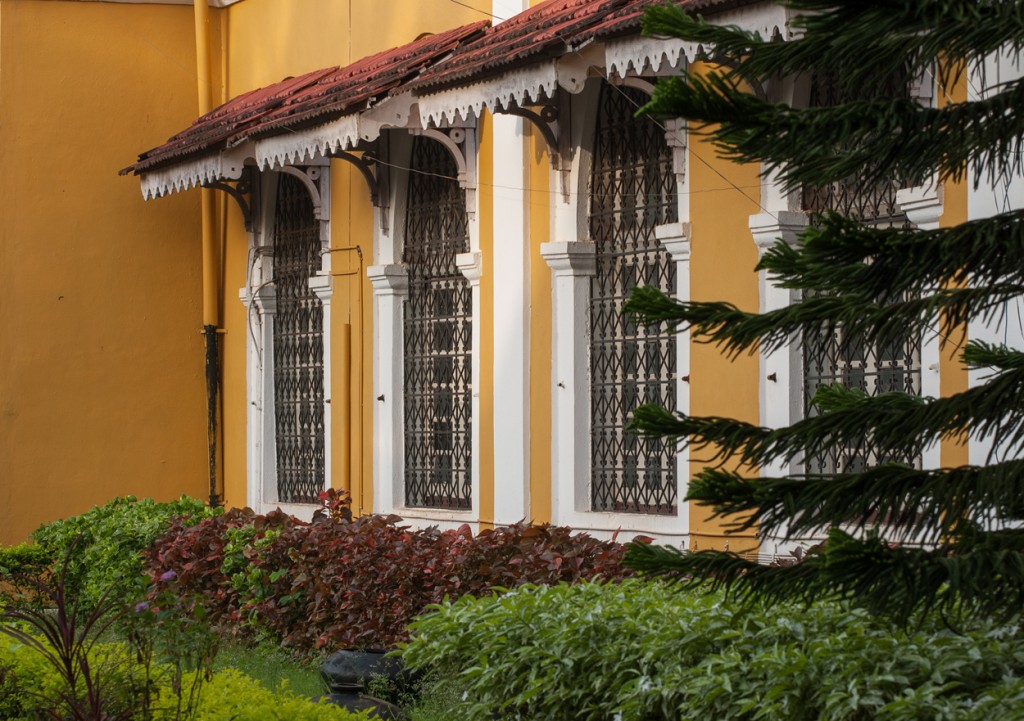 High on the hill – Government administration is as colourful as the homes.

Even government complexes are amazingly bright, and the full colour spectrum is interposed with the traditional white arches all over town. It is a great place to just wander around. The climate more or less forces everyone to relax as a means of getting by. 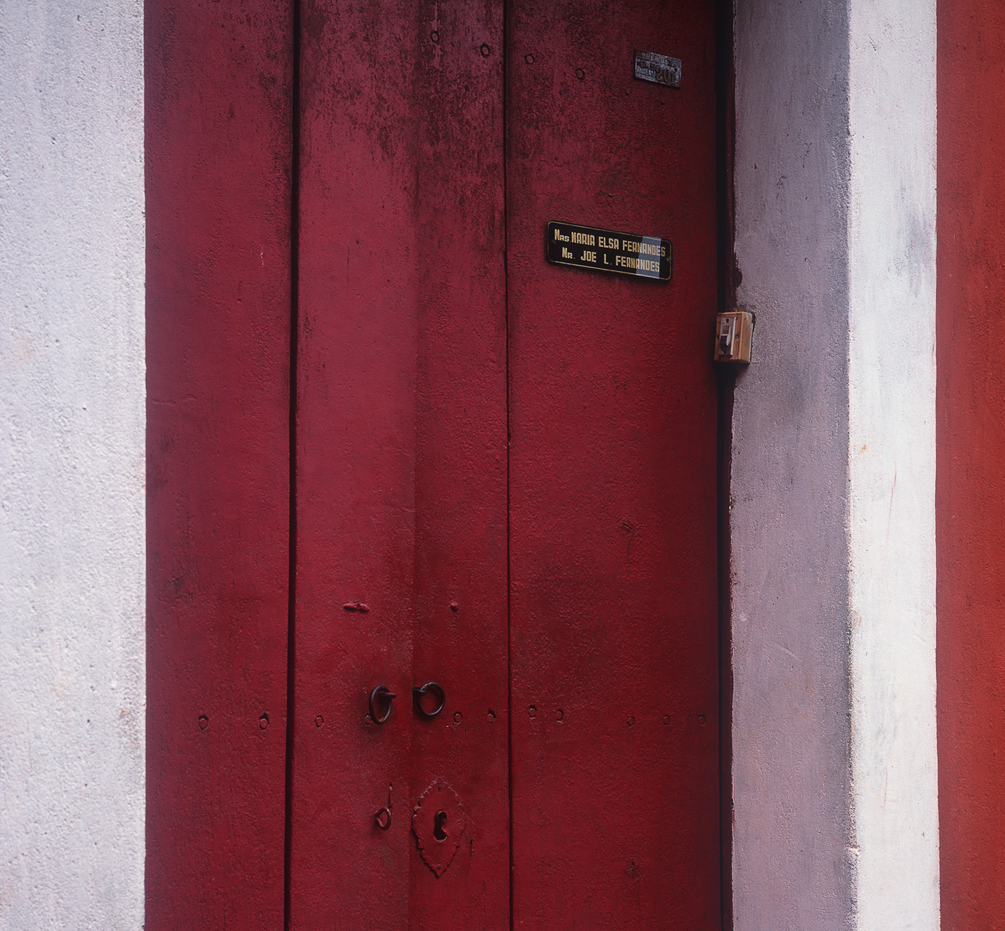 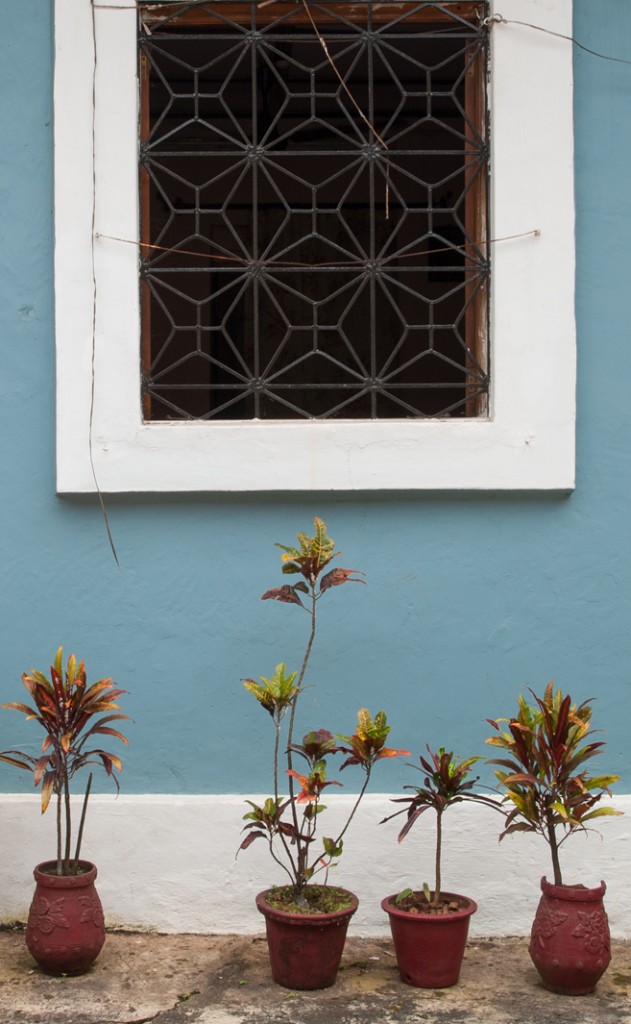 Flower pots in the colourful area of Fontainhas, Goa, India

Window frames are solid and often stand proud of the building walls. Security has clearly been a concern for some considerable time in a town where the inhabitants depend on cross breezes throughout the evening to cool down after dark. 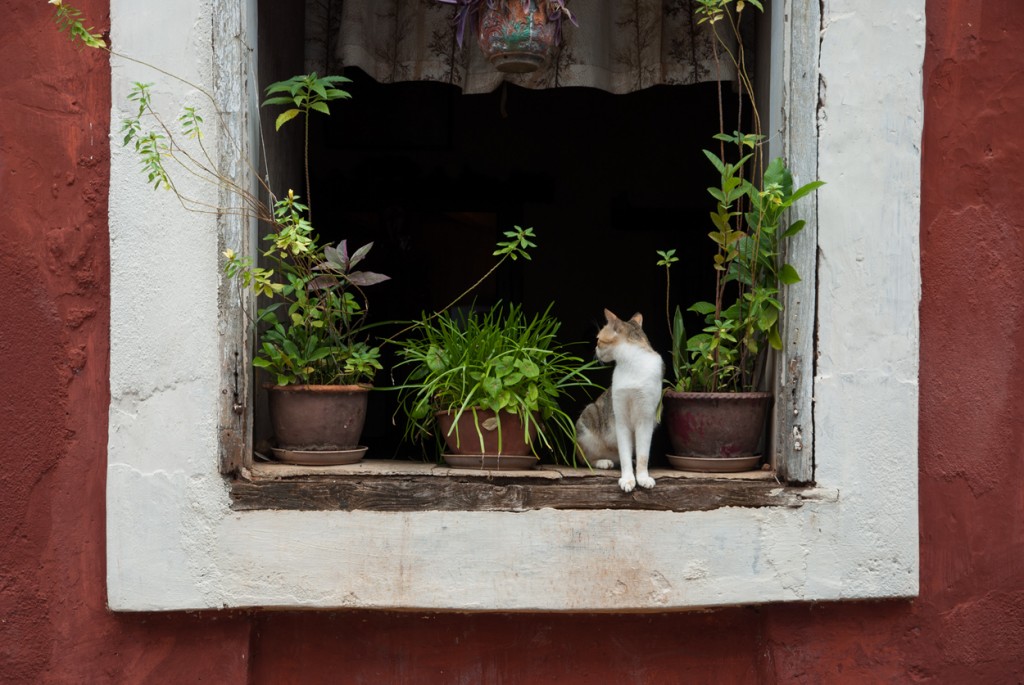 Animals fare somewhat better in Goa than elsewhere in India thanks to the European heritage. I always carry biscuits and meat around and feed the less fortunate, hidden inside the old derelict buildings.