I recently spent 12 days in London (yeah, Volume 2 of InSight: London is on the way, with touristy routes explored to complete the Off the Beaten Track volume 1!). During my scouting of Canary Wharf, a pedestrian passage immediately shouted Space: 1999 !

When I returned home a searched for images of the Eagle One Module, it looked a lot more old-fashioned that in my memory with its exterior space frame chassis reminiscent of a kitcar of the same period. A bit like a gecko with an exoskeleton … 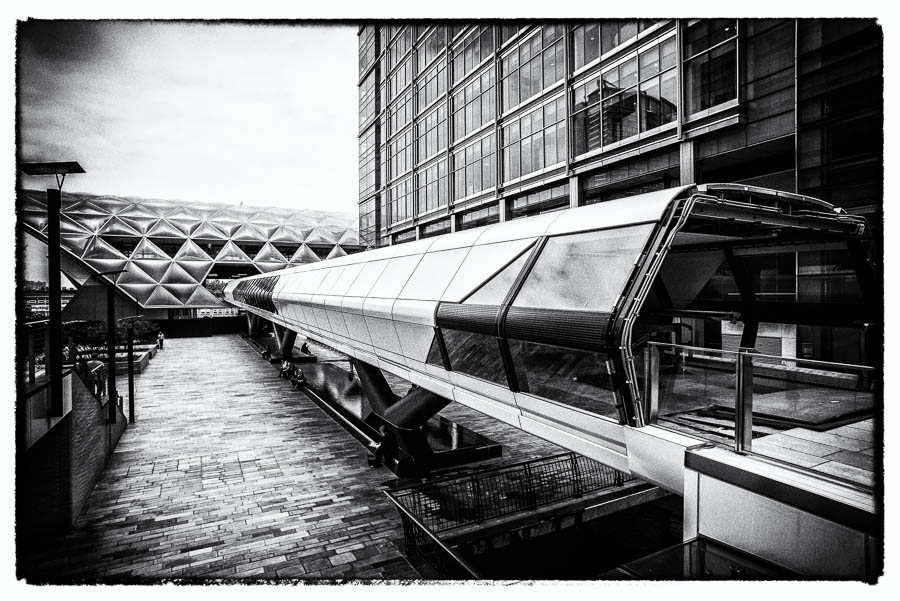 Nevertheless, this passage on the North Colonnade made me think of the TV space module and this is the resulting picture. Whadjathink? Does it make you tick ? Does it make you want to walk that passage to another dimension ?

This broad scene requires a very wide angle lens to fit everything in. I used the Leica Elmarit-R 19/2.8 II that very rarely leaves my bag. This lens is both very sharp and very well-behaved, with good handling of highlights (except for terrible flaring with the sun in the frame) so it was perfect for the very bright overcast sky conditions.

As with so many wide-angle photographs, this one is all about balance and composition. With so many competing lines in the frame, a very horizontal camera is required to maintain the desired balance. Even a degree out of kilter will make you feel like you’re on the ferry to Stornoway in the middle of winter (August to May, during the good years).

In fact, the oblique view across the square creates steep diagonals in the tiling that would make you think the skipper is now headed to Orkney, were it not for the counterbalancing act of bubbly roof in the background. Multiple visual cues of non-crookedness along the edges (lamp posts, building frames) also contribute to keep the whole caboodle straight-looking. If your lens has distortion, this is one these photographs where you definitely want to get rid of it.

Here’s another example where this matters, taken in Hong-Kong: 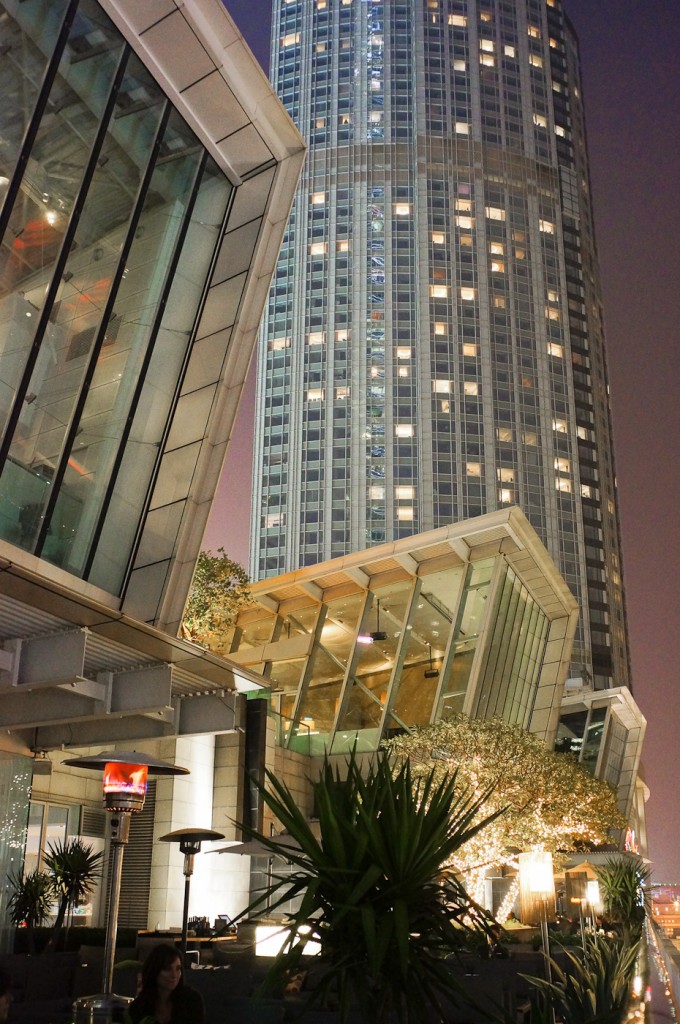 [annecdote] Asked to represent Plato’s Republic, artist Cy Twombly painted a large rectangular grid of blue lines *very* slightly off-balance.  The visual effect (implying “almost perfect but but on the brink of collapse”) was profound. [/ annecdote] When balance is required, spare no effort to provife balance.

So with body level and pointing horizontally, this is the out of camera image. 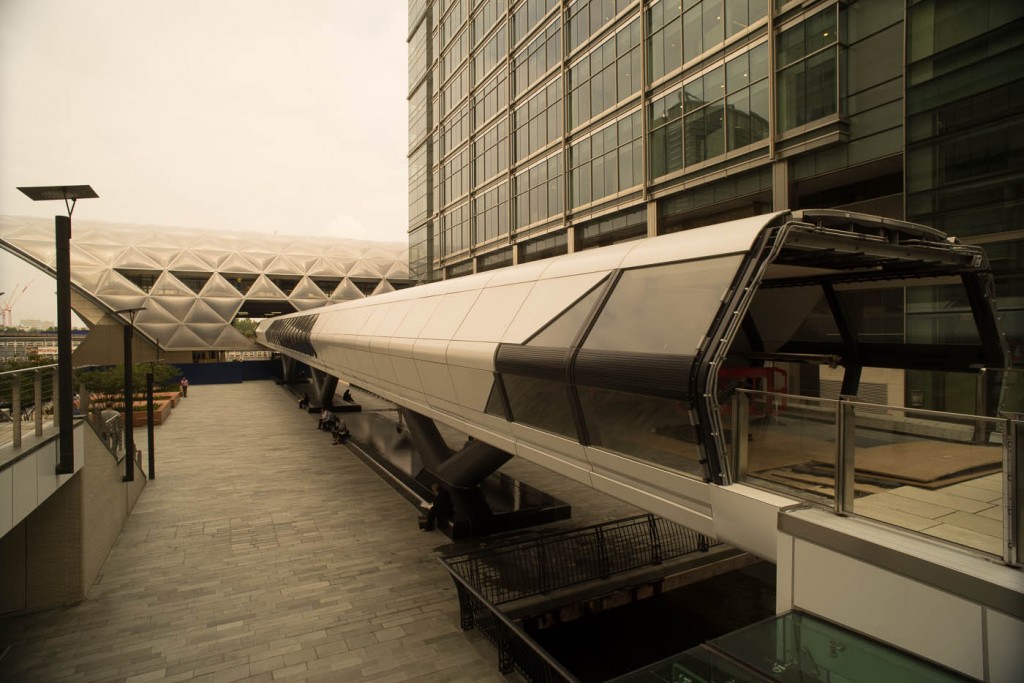 The idea is there, but the photo leaves a lot to be desired.

First things first : auto white balance in LightRoom made huge improvement. The A7r is a sweet camera with infuriating implementation of some vitals such as white balance. Sometimes, you wonder whether the sensor was in the same time zone as you or if night was mysteriously falling on it while you were looking for suitable place for lunch …

Still, easy enough to correct and this is stage 2: 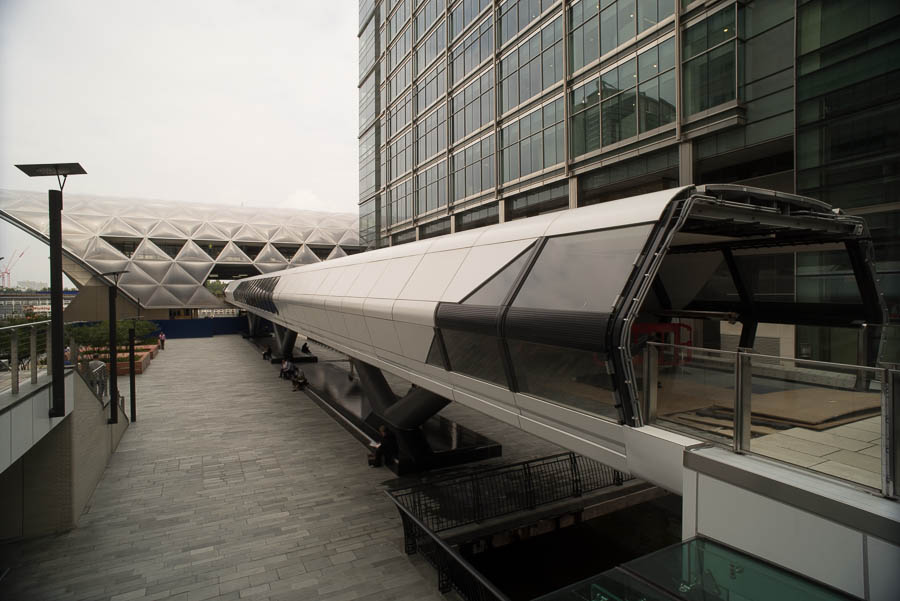 Vastly better but still not sexy.

So, in comes the clarity slider (+59), a great friend of mine that should be used with moderation on most photographs. I can’t help myself, so it’s a case of don’t do as I do 😉

To make amends for the poor white balance, the A7r has produced a file with such high dynamic range that I can twist and bend it without it loosing a bit of its smoothness. In that respect, I have yet to see a better camera, at any price !

Some other tweaks were made to make the image sparkle a bit more while keeping the shadows and highlights in check : +0.4 stops exposure, +40 shadows, – 40 highlights, +35 whites.

I often dial whites back up after reducing highlights. This might lose some small areas to pure white but brings back some of the liveliness lost by the reduction in contrast. The photograph doesn’t have that poorly-executed HDR look to it. 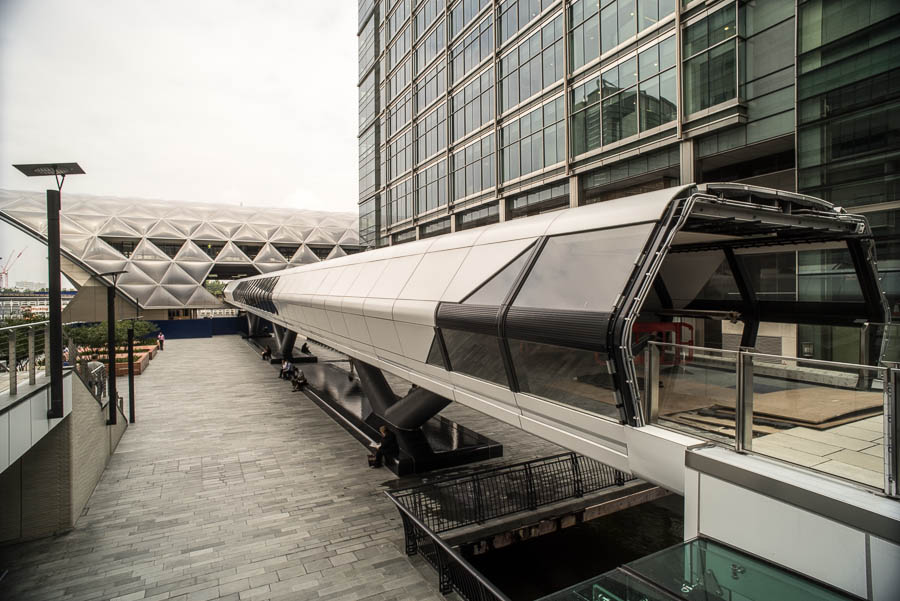 At this stage, I could live with the image, given some local tweaking.This is what co-author Philippe calls a state that displays without interpreting. It lets your imagination work on the scene and – hopefully – invites you in to make your own decisions about what’s best for the final image.

But in this case, what I want to do is show how I react emotionally to the scene. To me it screams of science fiction. It could be out of Gattaca or on Coruscant.  Which is why I’m calling in my other friend Nik Software’s Silver Efex, planning to use the Film Noir 1 preset, which is one of my favourites. This preset adds strong contrast, toning, vignetting and grain to the image and I have used it in another photographed published here and made in Istanbul : the Karaköy waterfront.

Since I didn’t want the retro look, I got rid of the toning, most of the grain and changed the vignetting signficantly. I added some structure to bring out the little details on the ground and buildings.

Back in LightRoom I added final touches such as extra clarity painted onto the white passage with a brush. Et voilà.

As you can see, contrast is very strong bot the sky is not white, and shadows have retained plenty of detail, except in the corners where you would only detract from the intended circulation of the eye.

The high contrast is a very personal taste and others would have post-processed this photograph very differently. With very subtle work on the colours and texture smoothing, it could have been made to look quite ethereal. But that is a matter of taste entirely.

As for point number 2, the image below should explain why I prefer not to flip the photo horizontally: 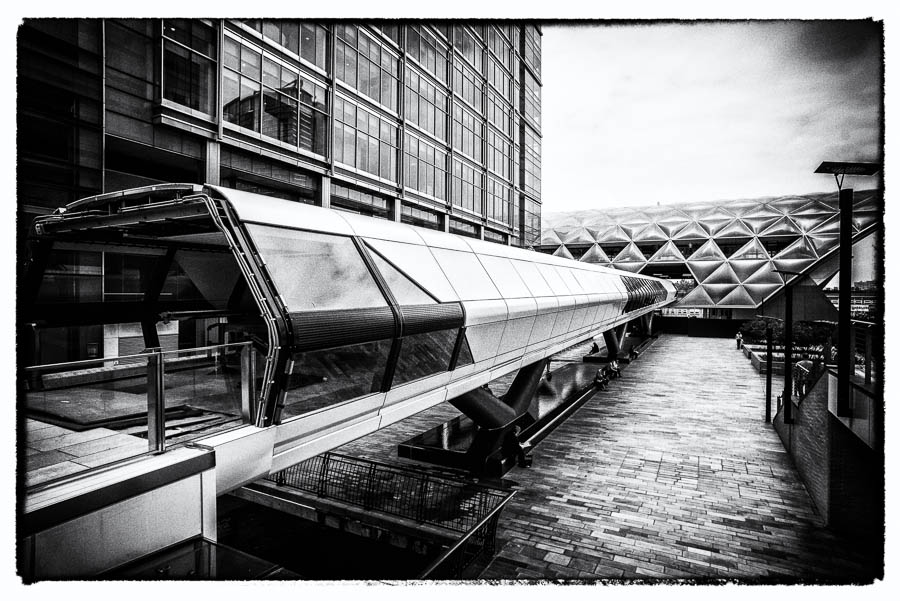 Many of us have been taught to read life from left to right. Left to right movement is natural and fluid. With the passageway pointing to the right like a great big spear through the frame, our eye follows to the end and doesn’t really come back. It stays stuck there and the image feels a lot more static. It would probably sell a lot better, but who’s counting?

Whereas in the original orientation, the sheer visual strength of dominant white shape takes you from right to left but, then, our natural tendency to travel back to the right takes us back to the starting point either along the shiny paved floor or along the bubbly building at the end and the glass panels to the right. This means we go round and round several times examining various details in the picture several times before moving on. Also, the visual imbalance created by the floor tiling seems a bit more pronounced in the left-to-right version. It’s a very personal thing.

If a reader from a country where reading from right left sees this post, I’d really love to hear from you. Please tell me which version appeals to you most. Thanks !