#263. Every Story Tells a Picture: “The day I catched a starfish”

today Grandpa and Grandma took me to the sea. There was lots of boats and I chatched a starfish. It was all red.

Don’t know about you, but this is what this photographs says to me. 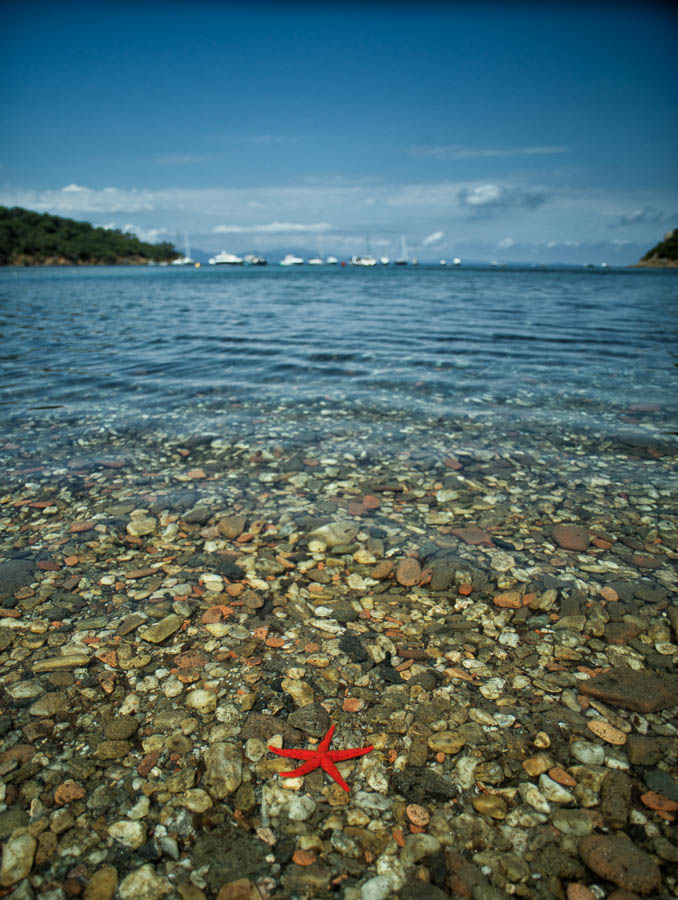 It’s all about the joy of a 6-year-old who’s found his first starfish and the serene setting of the scene. Nothing deep or elaborate, but much more personal than a post card. More like what Tommy would draw in his diary, back in bed, later that day.

Following the “Every story tells a picture” tradition (this is post number 2, let’s call it a tradition 😉 ), here’s how it was made. (post number 1 is here)

Since the starfish was small, I had to get in as close as possible and use a wide-angle lens to make the foreground very prominent. Framing the boats in the distance with a standard 50mm lens would have forced me to walk back a get a tiny red speck.

I used a 19mm lens (my Leica Elmarit-R 19/2.8 II) and placed the lens as close to the water’s surface as I dared to, angling the camera in order to have the horizon and boats at the top of the frame. I didn’t like the result (the starfish was too big), so I moved back about a foot and took a second picture, then a third, very slightly closer.

Aperture was f/2.8 for a shallow depth of field, so as to keep the attention on the starfish. The starfish is centered, because it is the most important element in the picture and everything else hinges around it.

The out of camera frame is below. 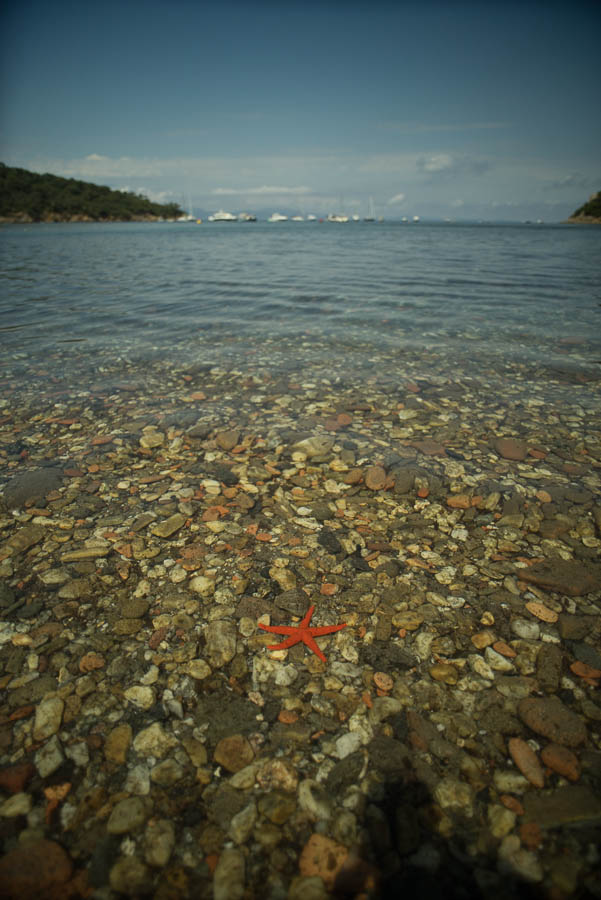 Out of camera file

It has potential, but the bottom of the frame almost qualifies as a selfie (with my shadow barging in, uninvited), the colours are muted and the colour balance is out of whack. It is also slightly underexposed, as is typical of my Sony A7r.

First things first, I cropped the bottom of the frame along the grey pebbles above my head.

I then proceeded to make the image a little livelier.

Aiming for a slightly retro look, but not wanting a full-blast filter effect (see below) I used a graduated filter (in Adobe LightRoom) for the top with a blue-ish cast and reduced clarity, then a neutral graduated filter with increased clarity for the bottom.

A little red goes a long way. Even a tiny amount can transform an  image. But it needs to be pure, not faded orange-red as here. So, still in LightRoom, I pushed the hue slider of the orange line (in the HSL / Colour / B&W box) towards red, then increased the saturation of red (in the same box). Et voilà.

There was no recipe to follow, it was just a case of making the starfish as red as in real life and getting rid of the dirty orange cast that imprecise white balance had added to the file. Adding a touch of blue to the top meant to mimic the look of cross-processed photographs.

Below is what I didn’t want to do : excessive shifts that evoke all that is bad with ready-baked filters and soulless postcards. 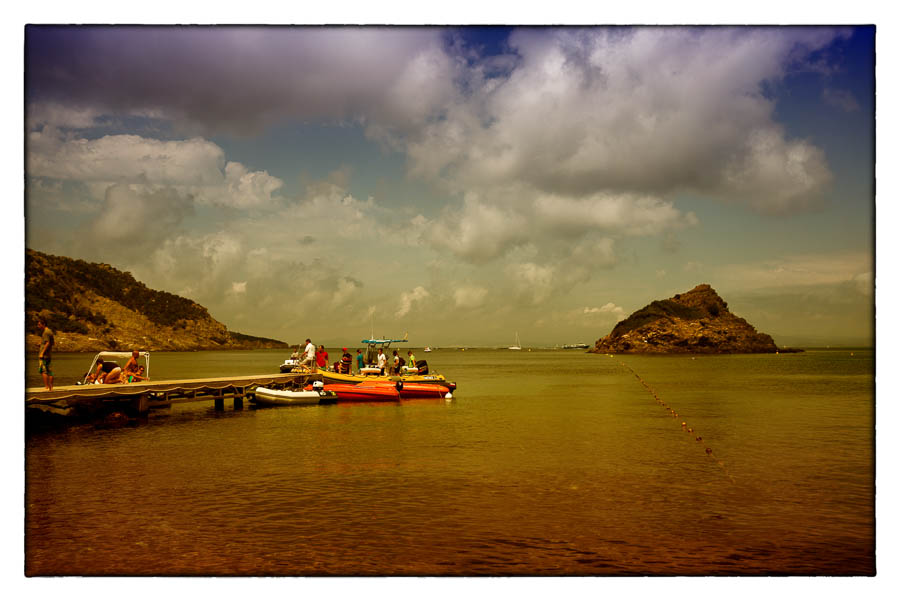 And this is another shot made 3 years earlier at the exact same location. A “Polaroid filter” is used, almost at full blast, but I still think it works well with the pure blue sky and tanned skin-tones.

In post-processing, there are few hard rules to obey rigorously, so long as the result doesn’t look overcooked and supports the storytelling you have in mind. 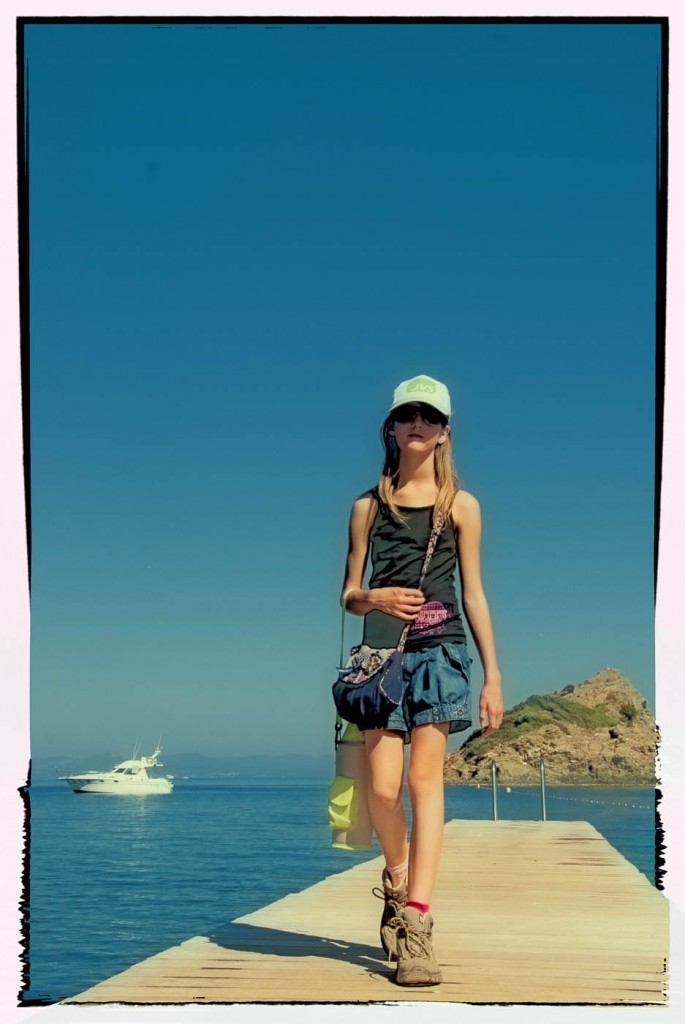