The Tasmanian central highlands region encompasses a vast tract of pristine wilderness, including the country’s most visited bushwalking destination – the Overland Track, stretching from Cradle Mountain in the north to Lake St. Clair at the southern end.

Despite its popularity with overseas adventure tourists, the northern end of the park features many easily accessed ecosystems of great physical appeal, just a little off the beaten track. This rugged glaciated zone has an amazing array of flora and fauna, much of it endemic to the island.

Tasmania is a significant remnant of the supercontinent of Gondwana, along with the South Island of New Zealand and Patagonia in South America. Many species of trees and animals are common to each of these beautiful – if inhospitable – regions, and certainly the weather is a challenge in all of them. 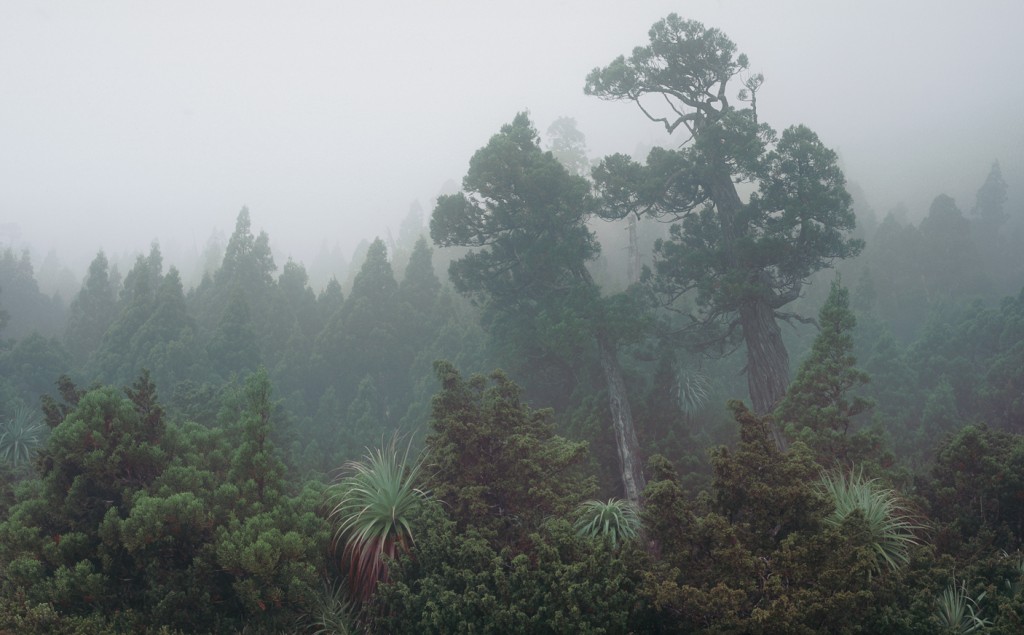 The confined area around the iconic peak of Cradle Mountain is one of the finest examples of Tasmanian wilderness; most of the locations shown in these images are within either an easy day walk from the trailhead at Lake Dove, or are accessible with an overnight stay in a basic but comfortable mountain hut. Despite Overland Track visitor numbers climbing towards 10,000 a year during the summer to autumn walking season, there are plenty of less frequented and less trail-like tracks which ensure a very personal experience in the dense bush, moors and heathlands. You can even walk the trackless open country around the high plateau. 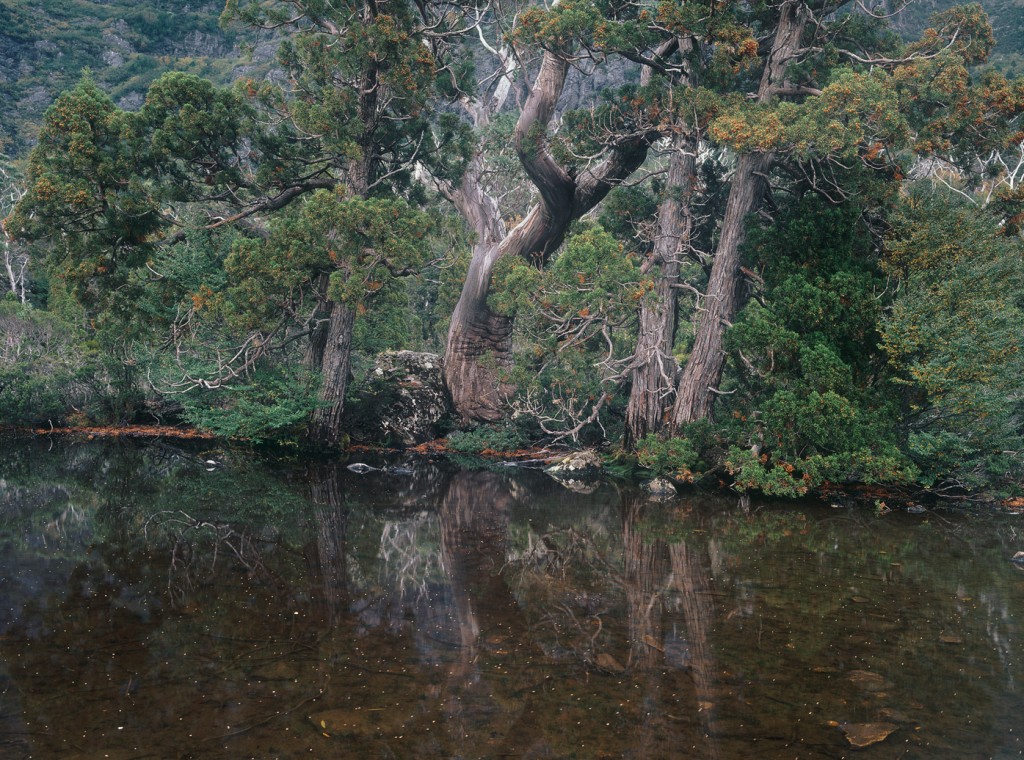 Tarn in the sheltered lee of Cradle Mountain

The Central Highlands are part of the second largest tract of cool temperate rainforest remaining on Earth, after British Columbia. In this super humid environment, heavy rain can seem a constant companion, along with brooding low cloud cover and ferocious winds – weather systems move very quickly across the Southern Ocean. Water seems to be everywhere in the form of lakes small and large, mountain side tarns, bubbling creeks, and underfoot in soggy sphagnum bogs and spongy peat soils.

The visitor must be prepared for the worst of conditions – too many have lost their lives in the fierce weather than can strike at any time of year, sometimes within close proximity of the trailheads. Many bushwalkers regard Tasmania as the most challenging environment in Australia because the air temperature often hovers around freezing point yet the violent tempests that drive the moisture laden westerly weather systems steal all body warmth in a few minutes, forcing the unwary into a struggle for survival in whiteout conditions, as they become increasingly disoriented.

Kitchen Hut is strictly for emergency use – sitting high on the exposed plateau, it has saved may lives. Four stout cables prevent it being blown away.

Tasmania lies in the path of the roaring forties; at this latitude in the southern ocean the last landfall was Patagonia, so this may be the cleanest land air in the world. Wind speeds can be very high over the high cirques, such as Barn Bluff cirque, over which high winds are boosted by the venturi effect as they channel up the 500 metre altitude gain to the top of Fury Gorge. I once met a wild-eyed woman who – still shaken 30 minutes later – had been blown off her feet and deposited ten metres downwind, not far short of a cliff wall – this happened despite her carrying a heavy multi-day backpack. Sometimes the only way to proceed across these areas is to crouch very close to the ground. 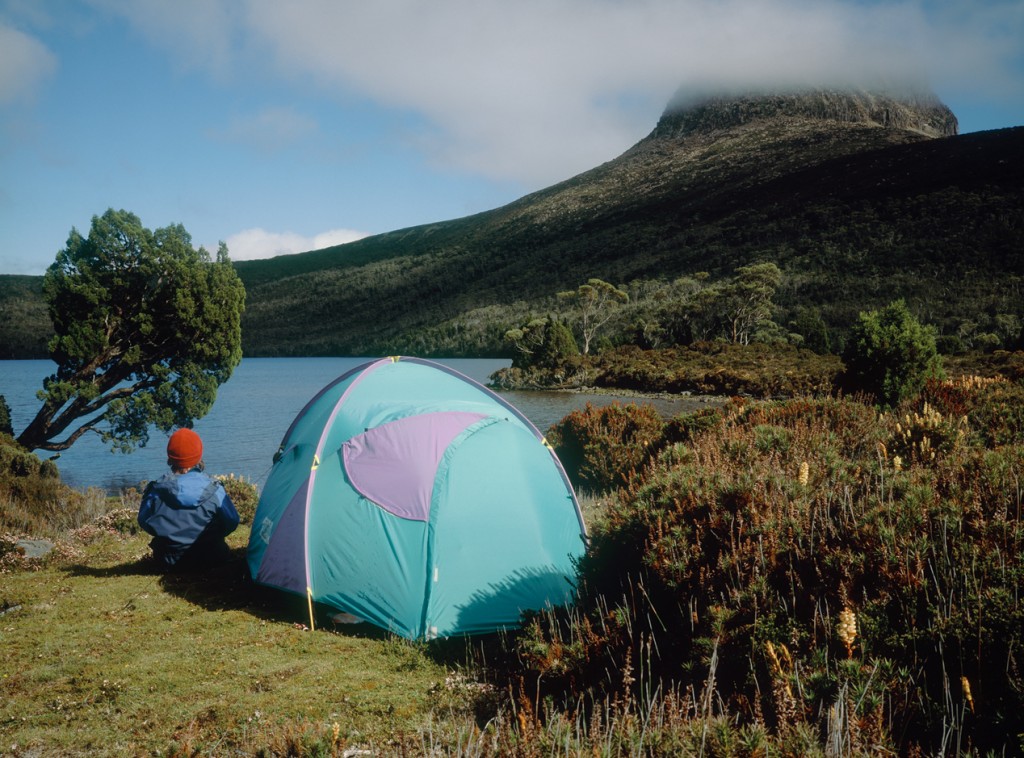 Most visitors and walkers focus on the spectacular dolerite flutes of the major peaks in the north of the park, overlooking the extraordinary tree, scrub and ground cover. Tasmania’s rainforests are primeval enchanted environments in which the air hangs heavy with earthy aromas, perfumed by the leatherwood and sassafras trees, all enclosed within the dominant myrtle forest cover. Most of these forests are found in the south of the park, with some isolated areas in the lee of the peaks in the north. Also worthy of note is the only deciduous tree species endemic to Tasmania, the fagus beech, which sees photographers descend on the region in late April as its leaves turn bright red and yellow.

The area’s most remarkable trees are the endemic pines: King Billy Pine, Pencil Pine and Celery-top Pine, all of which are often found co-existing with the primitive Pandani, an amazing grass tree that grows to prodigious heights. 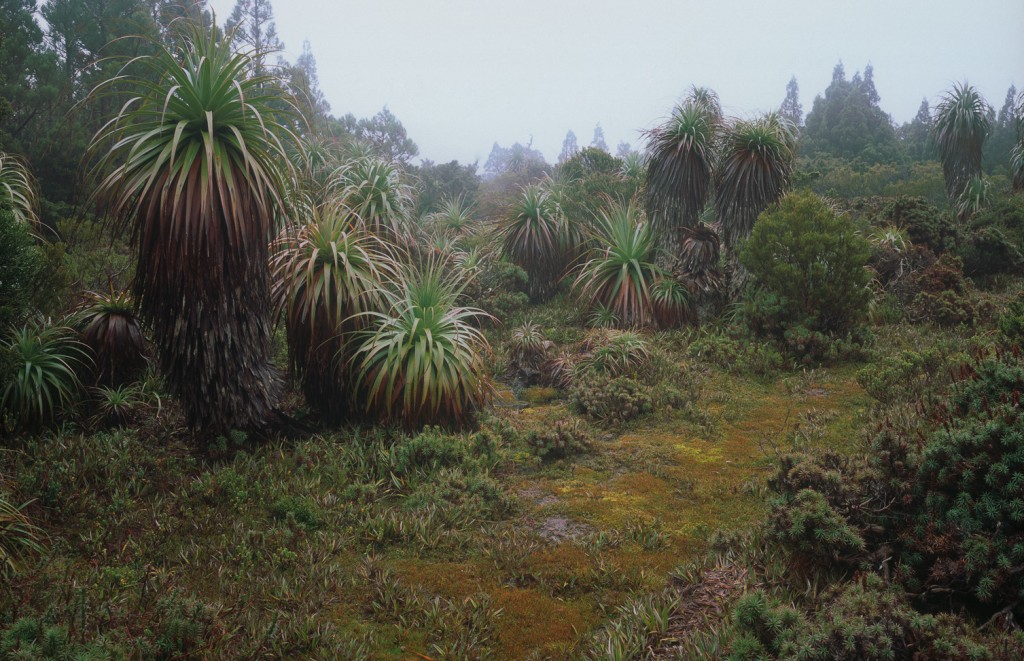 Nearby Walls of Jerusalem National Park (also easily accessible) was used as a backdrop in the major BBC production Walking with Dinosaurs because the producers felt that this region best represented the Jurassic era.

Much of wild Tasmania is no place for the unprepared to walk cross-country, due to the difficulties of moving through giant stands of tea tree forest and the even greater challenge of getting through the tree species known as ‘horizontal’.

The rangers don’t like to hear about this, but some groups of hard-core bushwalkers take turns blazing access paths through horizontal. One told me of a trip he did, in which ten men took eight hours to cover one paltry kilometre, each working with a machete at the ‘tree face’ for a few minutes before retiring to the rear of the queue, wasted by the effort. 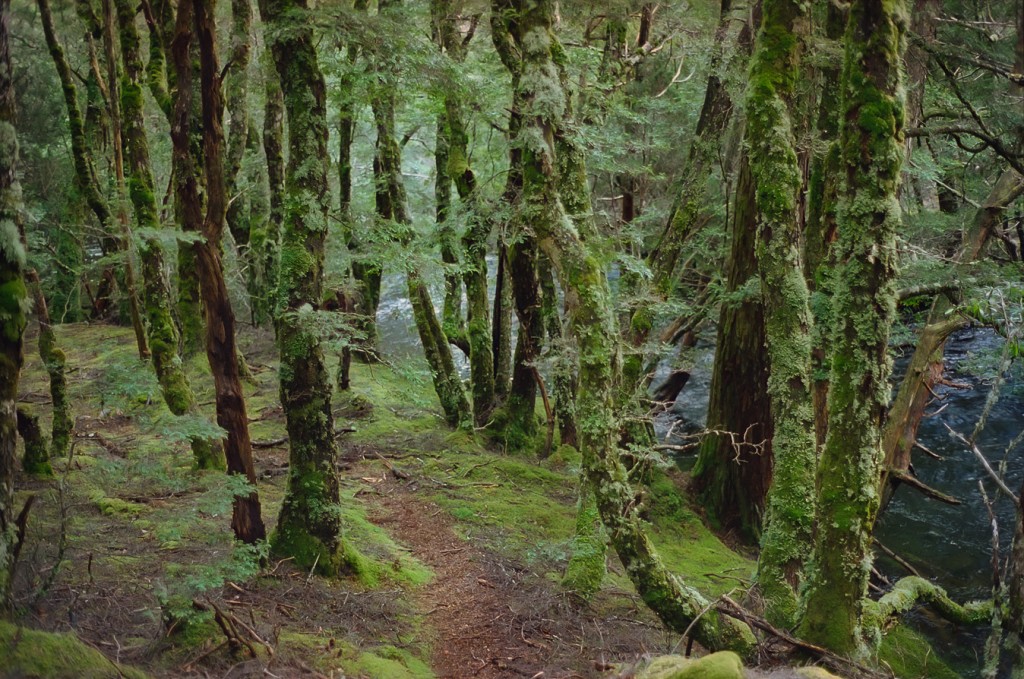 Lightly used track along the river Mersey, in flood after five days rain

The richness of the mixed rainforest and sclerophyll environment supports a wide range of exotic and quirky yet attractive animal and bird life. Most of the marsupials are unused to human predation and so are very easy to approach – many feed around the bush huts in the park, especially Bennetts Wallabies, Potoroo, Pademelons (which often resemble a furry soccer ball with a head, legs and a tail attached) and Brushtailed Possums.

Adult possums in Tasmania attain the size of a grown Beagle and are more intimidating than small and cuddly! You may encounter Antechinus (Marsupial Mice) in the huts. Two species of quoll are frequently seen in campsites. These beautiful predators may take up the slack left by the Tasmanian Devil, the population of which is now being ravaged by disease – a breeding program is underway in mainland Australia to ensure their survival. 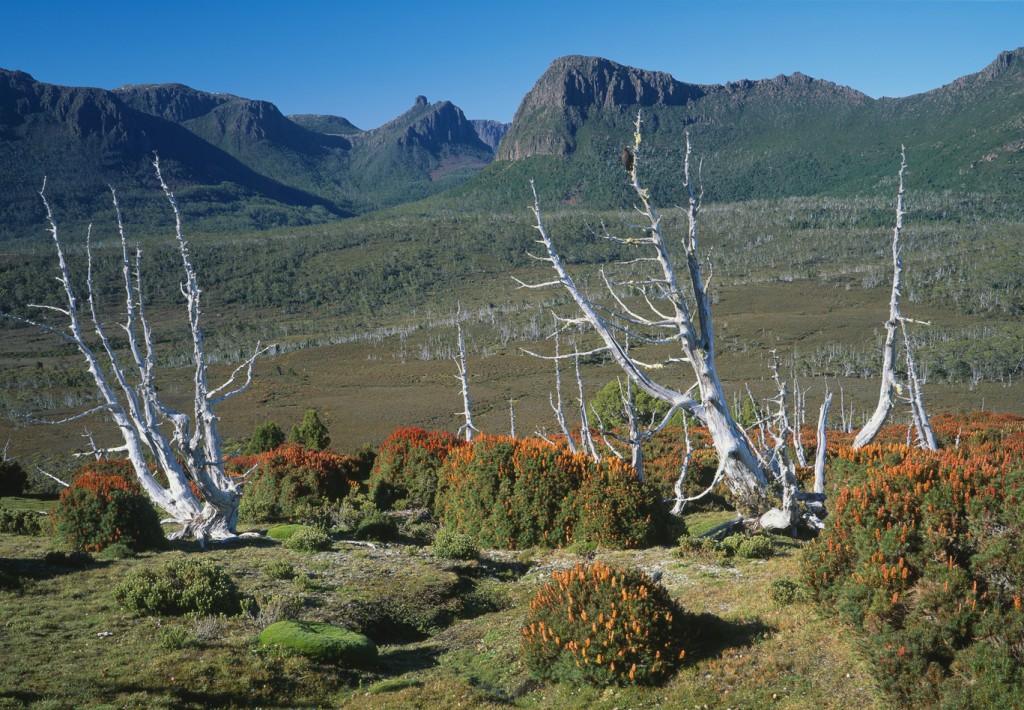 Open moorland seen from Mt Pelion East: dead king billy pines, red scoparia and a currawong to watch over it all

The hygiene of the forests and the surrounding pasturelands is normally helped by the efficient carrion scavenging of the devils and other small carnivores – the devils can totally devour animal corpses in a very short period of time. Devils eat about 15% of their body weight each day, although they can eat up to 40% of their body weight in 30 minutes if the opportunity arises.

While devils are very shy, some of the other forest denizens are expert at stealing food from your pack or tent – they are very insistent. Many a sleep is disturbed by tents being shaken furiously. A lot of walkers lose even more weight than usual over the course of the six to seven days most spend on the Overland Track, after losing any accessible food to the quolls and possums. Even the larger birds – currawongs and crows – will pull pack zippers open while you are climbing the major peaks for the
outstanding views. Lie packs face down, under a bush. 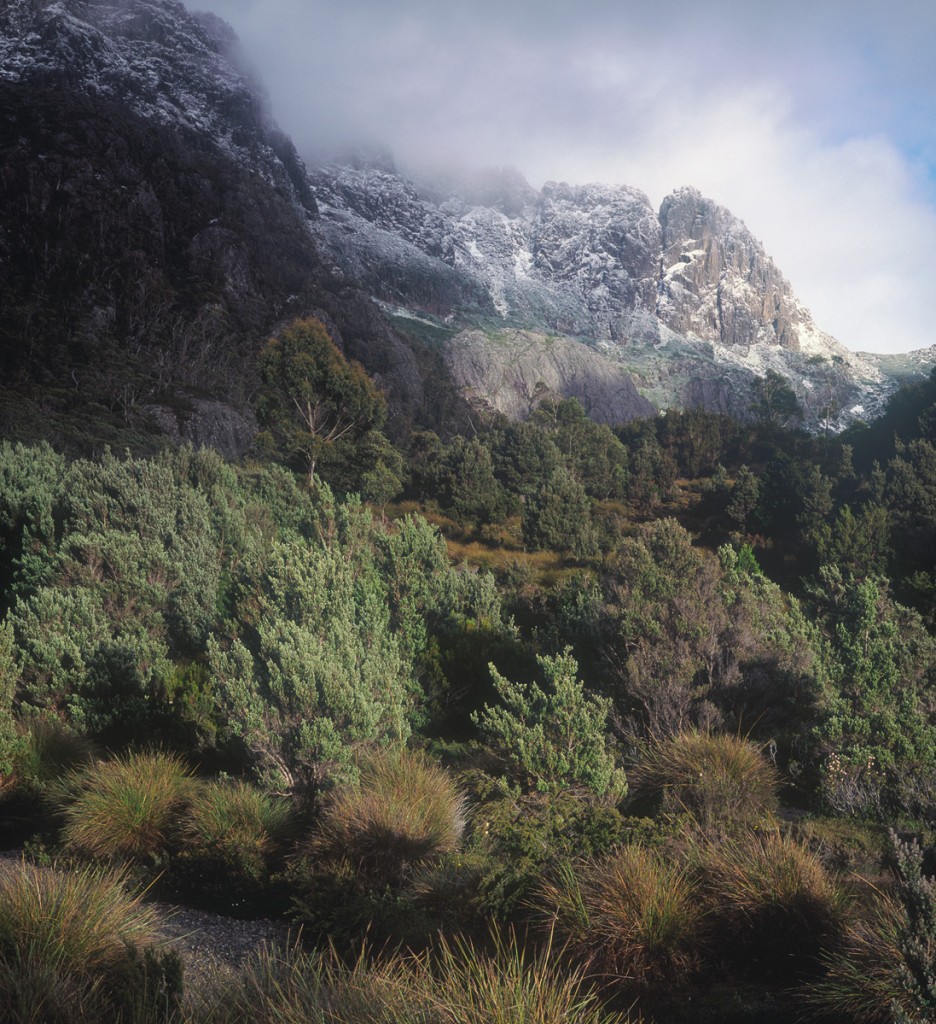 Tasmania lacks dangerous large animals like wild cats or bears. In warm weather before rain, it’s wise to keep a close watch for the only serious potential threat – the aggressive, mean-natured and very deadly Tiger Snake. In this sun-deprived region adults are jet black for solar uptake efficiency and very large – up to two metres long and as thick as a man’s arm. The highly toxic venom, produced in large amounts, is mainly neurotoxic, affecting the central nervous system but also causes muscle damage and affects blood clotting. The breakdown of muscle tissue can lead to kidney failure.

Not to overstate the danger, as the last snakebite death happened in 1966, but few walkers venture far off track – if you do, carry an EPIRB.

The best physical protection is to wear knee-length gaiters, a good idea in the conditions in any case. 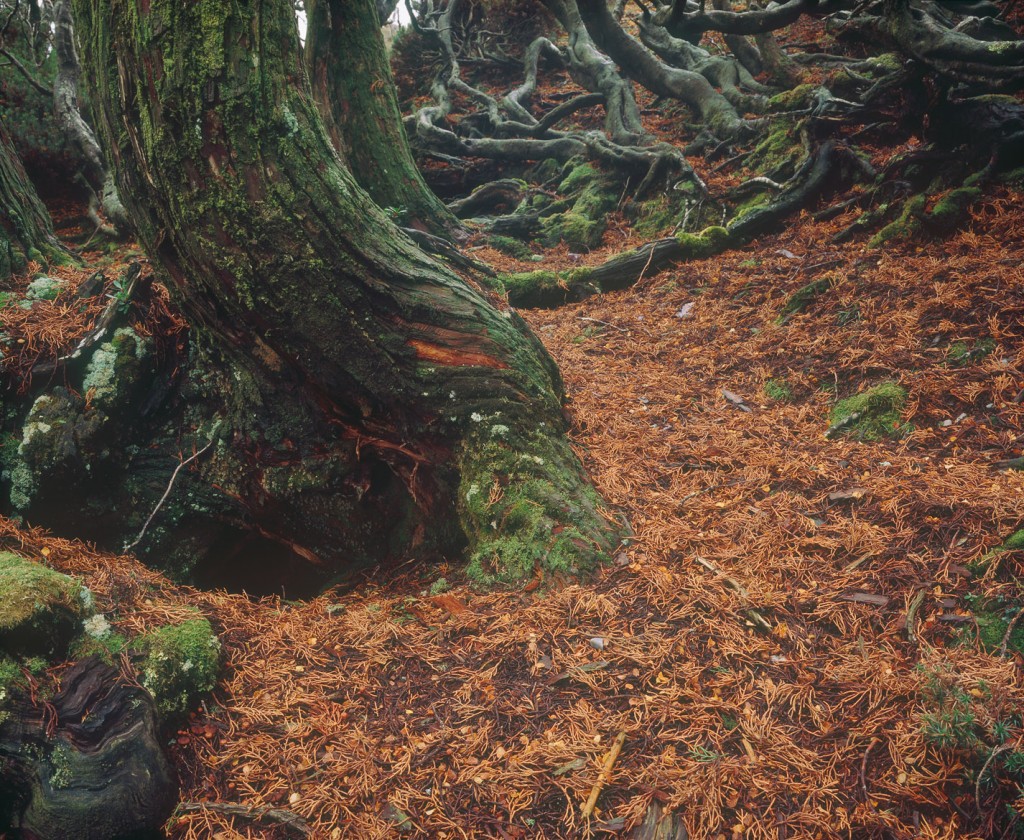 Birdlife includes the Black Magpie, the bugling Black Currawong and large flocks of Black Cockatoos in the lee of mountain sides, such as around Scott-Kilvert Hut.

The larger lakes are home to platypus, best seen in quiet moments in the early morning. The other Australian monotrene, the Echidna, is also a resident of the high country. 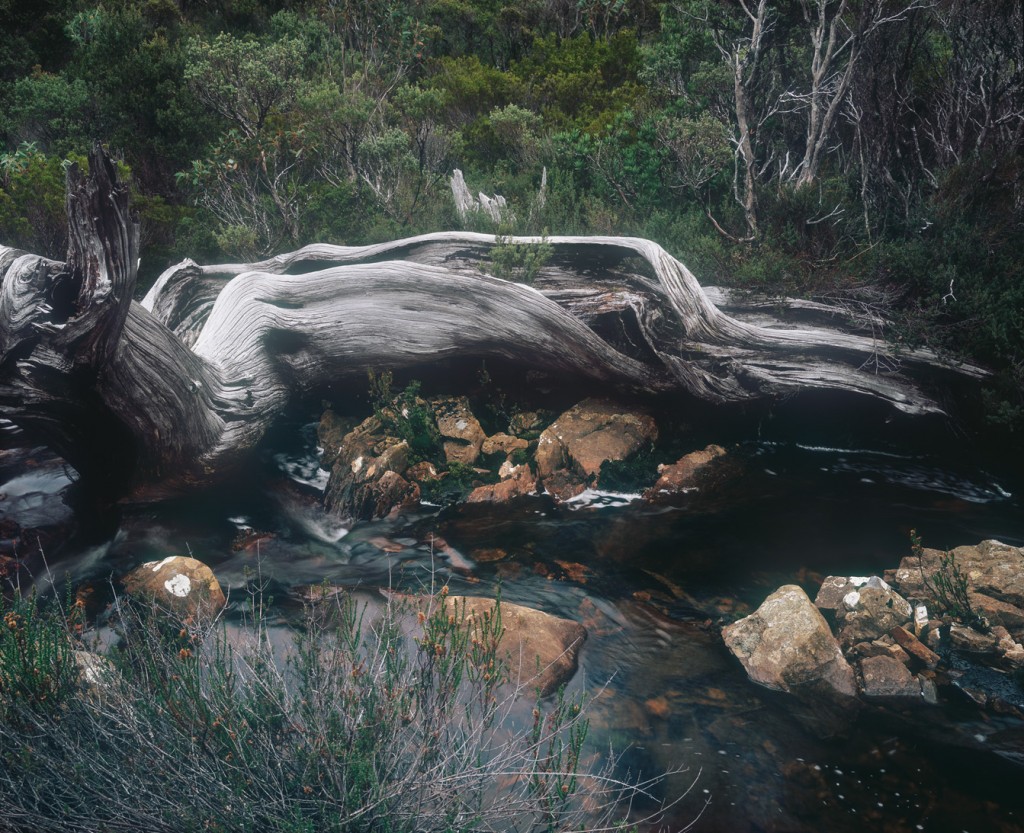 Cradle Mountain lies just 90 minutes from the picturesque seaside town of Devonport on the island’s scenic north coast; and around three hours from the capital city of Hobart.

The beauty of the place is very accessible to anyone capable of walking for an hour or two on flat ground – many visitors circumnavigate the dark waters of Dove Lake. The more intrepid can do a day walk by climbing Mt Mary on a formed track then traversing the Face Track immediately below Cradle Mountain before returning via the same route, or scrambling down the secret access path of Truganini Track back to Dove Lake. A longer and more enriching overnight walk – passing many of the locations featured in these images – involves taking the Overland Track to Barn Bluff cirque, then turning left to descend to Scott-Kilvert hut for an overnight stay, then walking up to the Face Track and returning via the routes described above. Cars can be safely parked at the Dove Lake car park. 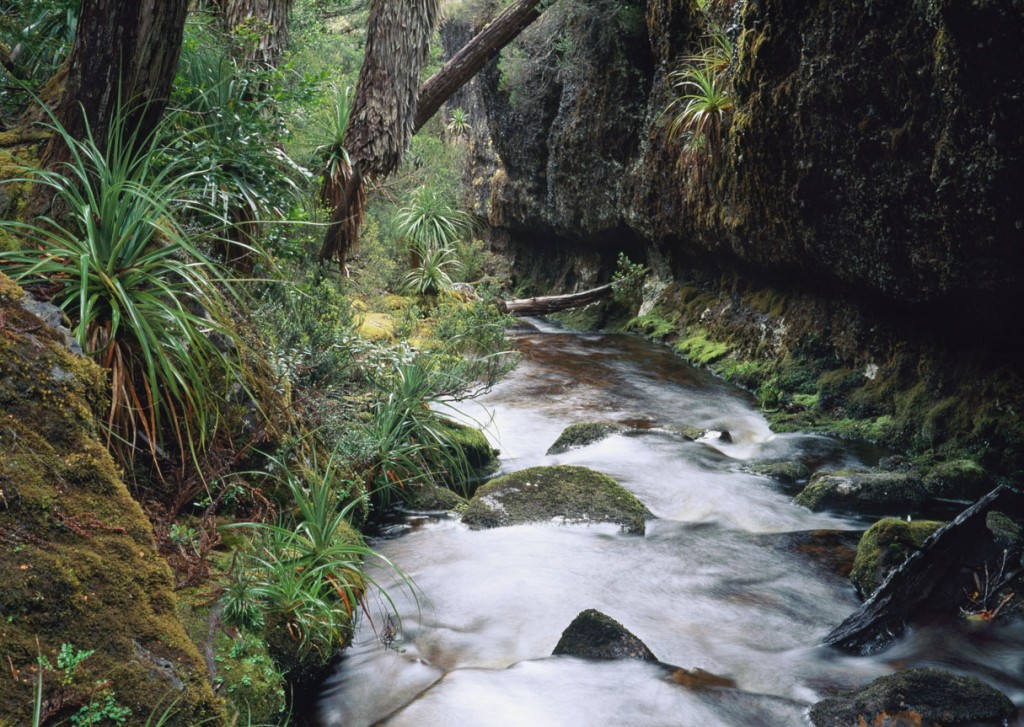 The first thing you need is good water protection. Most walkers use a pack liner or a pack cover – a liner is preferred for serious ventures due to the spiky bushes in the area.

Lens selection should emphasise wide angles for the intimate landscapes as shown here, and normal to short telephotos for the open moorlands and peaks in the exposed higher elevations. Peter Dombrovskis – Australia’s renowned wilderness photographer – used the equivalent of 28mm, 50mm and 100mm lenses on a 4×5 camera; on a digital camera a 21-24mm lens would see plenty of use.

The images in this article were shot on various medium format rangefinder cameras, 6×6, 6×7 and 6×9 formats on Mamiya and Fuji equipment. The lack of dynamic range is painfully obvious in them, even using Fuji Astia 100F, yet transparency film has its own aesthetic appeal, and the old lenses manufactured by Mamiya and Fuji were certainly sharp enough. 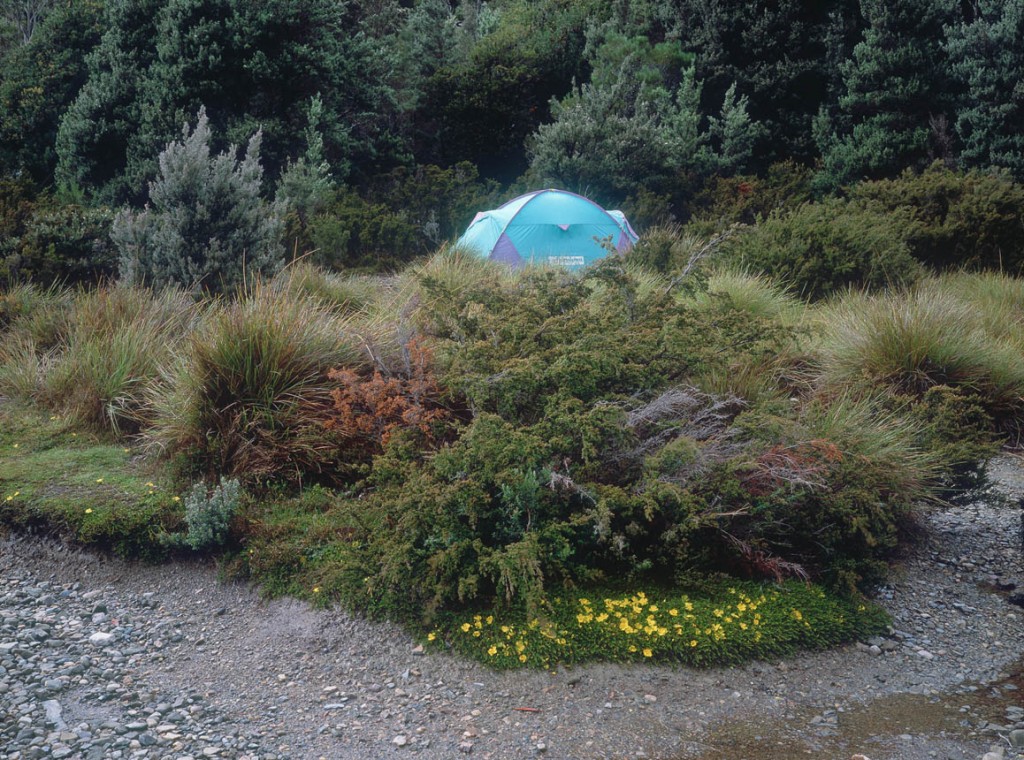 Most of these images were shot at f11-f16, often with shutter speeds measured in seconds – due to the low ISO ratings of the best film emulsions of the day: Fujifilm Velvia 50 and Fujifilm Astia 100F. Astia tended to be better behaved in its colour response and gifted the grateful landscape photographer a full extra stop of dynamic range: six stops against a maximum of five stops for Velvia. Patience was an absolute requirement, as only still conditions enabled this kind of shooting. How
very different for the landscape shooters of today, with cameras like Sony’s a7r – which in practical rather than theoretical terms – provides some 3-4 stops extra dynamic range, with more available at both ends of the tone scale in RAW processing. 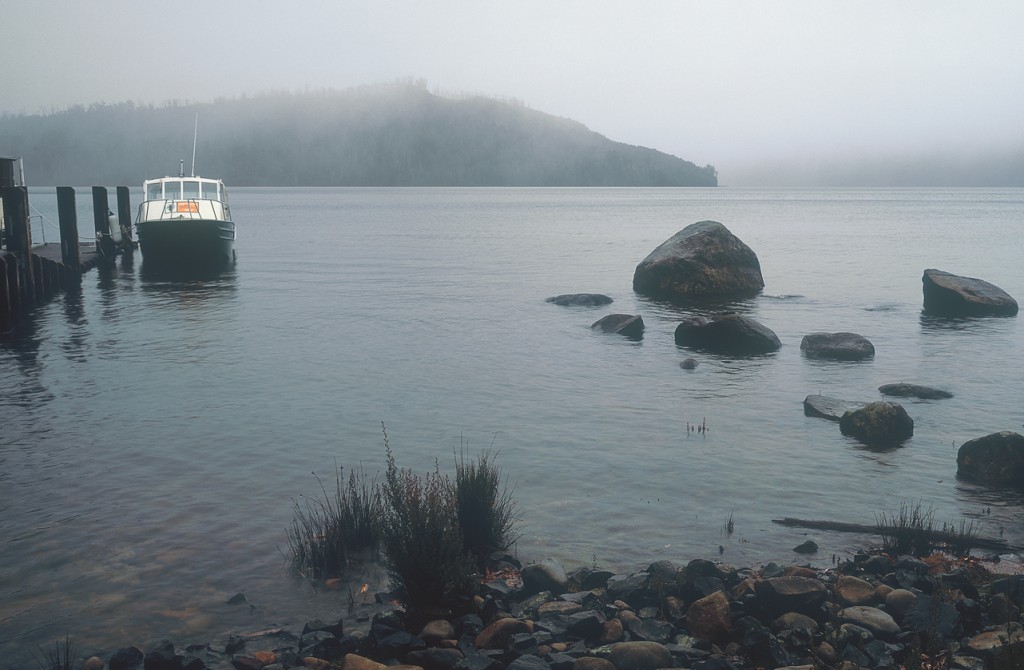 Lake St. Clair at the end of the Overland Track, just before snow