#254. Every Story Tells a Picture : Under the Eiffel Tower

The stronger the icon, the more difficult it is to find a personal perspective ?

Judging by the results of this Google search for “Eiffel Tower”, it would certainly appear so. And yet, I firmly believe it’s the personal perspective that will provide the more lasting impact and more pleasing photographs. 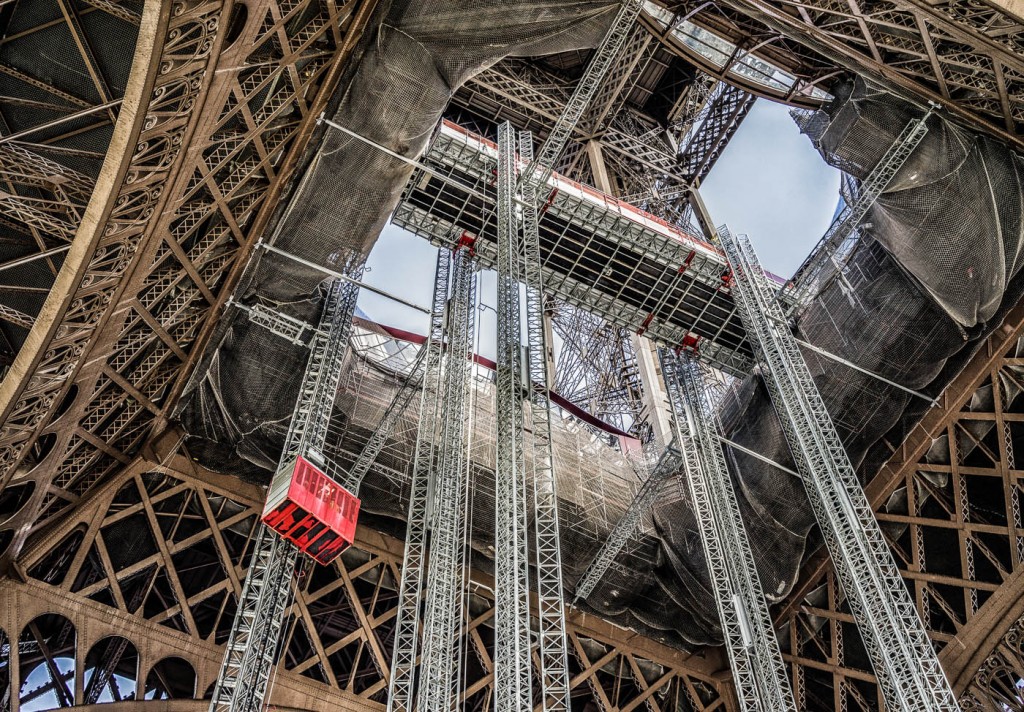 Maintenance work on the Eiffel Tower (click for larger)

It’s been a raging debate at DearSusan headquarters ever since we started working on the InSight Guides (travel guides for photographers) range : should we or should we not include the famous icons of cities we cover ?

As mentioned in the opening sentence, strong icons often invite a very standardized approach and result in photographs that all look very similar to one another. Which is completely at odds with our goal of promoting creative travel photography.

The jury is still out but, in the mean time, welcome to this “Every Story Tells a Picture” series, in which we will describe why and how we made some of the travel photographs we like, why we like them, what gear we used and what post-processing decisions we made.

And to kick off the series, I have chosen a photograph recently made while scouting for the upcoming InSight: Paris guide and which depicts an icon among icons: the Eiffel Tower.

This is what most photographs of it end up looking like : 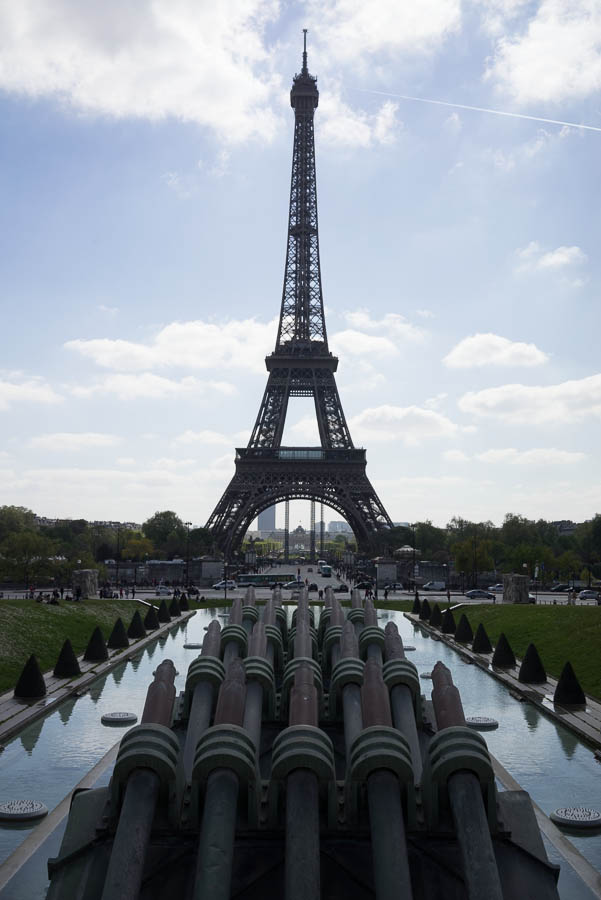 How do I know? It was made from one of the hot spots at which hundreds of visitors were congregating to capture it. A placement that implies strong backlighting, cars and other unsightly foreground details, low colour and the same photo as the thousands others made at the same spot on the very same day.

The last issue is the worst. Why not buy a postcard or a print instead? What’s the point of taking a picture that’s the same as everybody else’s? What does it say about how you felt? How will it stand out from those your friends show you when they visit or have already shown you? How long will you feel happy with it? Again, if you want a classic view of a classic icon, why not buy a cheap print made by one of the numerous pros over the years?

So, decision #1 was to shoot from under the tower. I noticed the unusual scaffoldings from afar. In the classic view above, they are an eyesore. They distract from the expected result. In the first photo being analysed, they are the subject. Once they are gone, this photograph will no longer be possible and no print by Doisneau or Cartier Bresson will be there to remember them.

“If your pictures aren’t good enough, you aren’t close enough.”

While not an absolute rule, it certainly applies here.

I found a spot around the railing that let me view the sky and gave a converging view of the pillars.

Exposure was full auto. I never take care of the exposure and simply dial in compensation when I think the A7r will underexpose (often the case with this camera that seems designed to protect highlights at all costs)

My standard 35mm lens gave me enough coverage for all the pillars and surrounding sky and tower to fit in. The only other lens with me was a 19mm f/2.8 which would have accentuated the convergence but also included a lot of the garbage and high railing on the ground.

I simply waited for the red elevator to position itself in a point that would counter-balance the sky and clicked. Which gave me the unprocessed frame below. 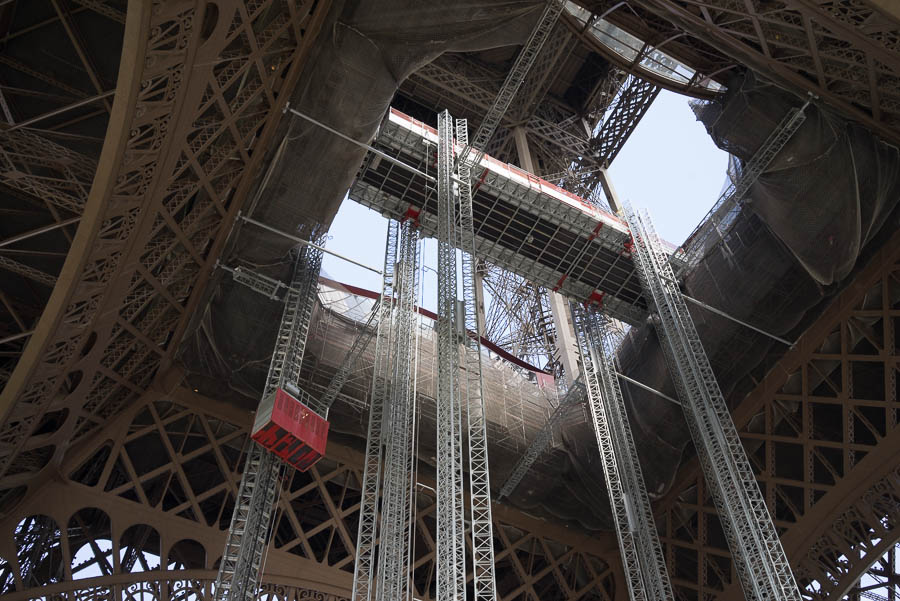 I wanted two things from the post-processing:

Part one was achieved using the “Manual” lens corrections in LightRoom (Capture One allows the same manipulations), using the vertical slider to increase the apparent angle.

This gave me this frame, which I then cropped: 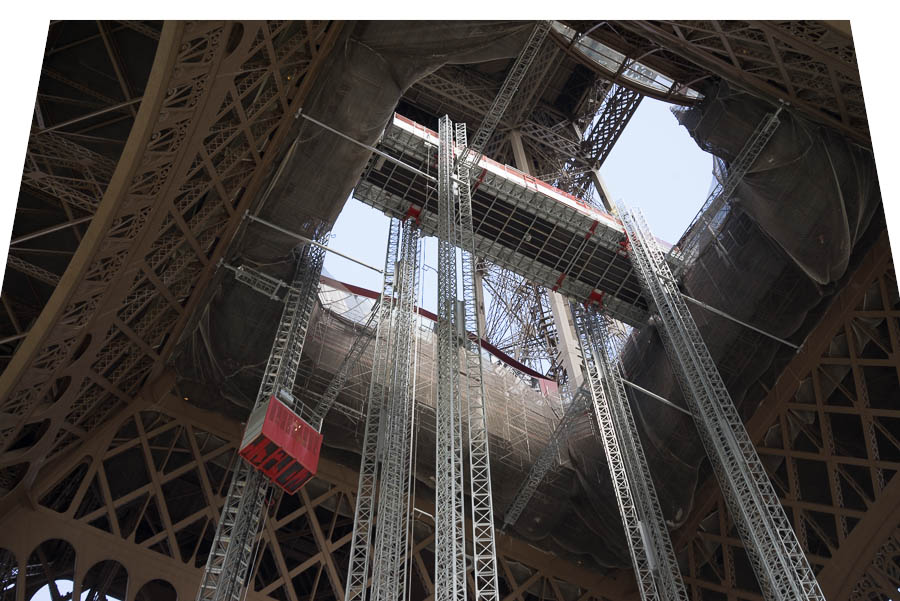 Under The Eiffel Tower – perspective corrected

I then played with the global contrast (slightly higher) and shadow (decreased) and highlights (increased) sliders.

Then, it was a matter of seasoning to taste. Clarity was increased in LightRoom and structure in Nik Software (Capture One would have allowed both enhancements). The final touch was a slight boost in saturation. Contrast management had already made the colours stronger and I only wanted the red elevator to stand out more.

I like the final result because the post-processing gave it a painterly effect that will print beautifully and the slightly muted brown balances well with the grey-blue sky. This makes the bright red cabin pop out more strongly and become a smal, off-center focus point that balances will with the strong vertical pillar structure. So the image feels both peaceful (controlled highlights and shadows, well defined frame, rounded structures) and dynamic. The old lady (the tower) doesn’t take center stage. It has become the stage and frame for the surgical field (grey-brown protective drapes) and maintenance operation.

Had been created during a once-in-a-lifetime visit to Paris, this photograph is one I would feel is really mine to keep. Instead of being the same as the neighbor’s, diminished by the repair work, it is one I’d be please to put on a wall and look at for a long time.

What do you think?

Here is a second shot from the same session, processed in a similar manner. 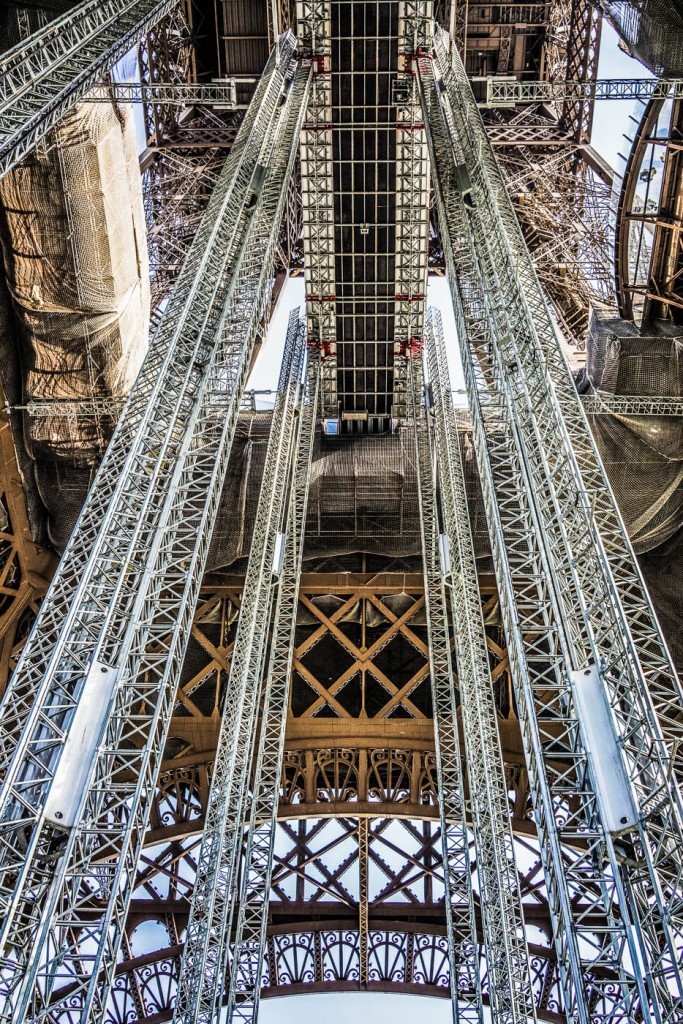 If you have made personal interpretations of famous icons, I’d love to hear from you and publish your results.