As I mentioned in an earlier post on the river Huveaune, Provence is a multifaceted region of South-Eastern France, not the rosy piazza lined with cafes and petanque players that past clichés of St Tropez have tried to push for so long. The Gorges du Verdon are a prime example of this incredible variety of scenery.

After leaving the craggy miniature fjords called the Calanques and sparkling Mediterranean waters, you drive North through the undulating hills of Provence verte with their quiet villages, charming rivers and abundant forests, reach the soft mid-altitude plateaux that host many of the lavender fields pictured in postcards and suddenly come to this brutal fracture in the landscape.

The Gorges du Verdon photographed in the morning

Welcome to the Verdon Gorge, Europe’s deepest canyon, and one of the most beautiful anywhere !

As Provence rose from under its warm coral sea 60 million years ago, cracks in the old Jurassic floor started to get eroded by streams that were to become the Verdon. Which explains why the gorges are gauged from the highest hills rather than the lowest plains, for those who couldn’t sleep without knowing 😉

And while I still have my don’s cap on, the Verdon gets it name from the deep green to turquoise colour (“vert” means “green” in French)  and its colour from the high content in fluor and micro algae of its waters.

Verdon is for Green

But, in spite of the magnificence of that green, I find that limestone and skylight rarely mix well in colour photography. The same is true of the aforementioned Calanques and for the Sainte Victoire that got Master Cézanne all worked-up.

Visually, you perceive all sorts of glorious shades that are bound to inspire the painter, but photography is different and I have yet to see a sunlit photograph of that sort of scenery that really makes me want to make room on the wall for a new print. Night-time, storms and twilight are different, but that’s a different story altogether.

No, I think these gorges and canyons come alive in B&W and Ansel Adams would have had a ball had he been able to carry his view camera and glass plates on a guided tour with Edouard-Alfred Martel. To me, high contrast B&W brings out the prehistoric character of the area like none of my various attempts are colour post processing, elsewhere on this page.

In fact, if you’re thinking the spot at top left is an Archaeopteryx, you’re not that far off. At least looks-wise (size-wise, it’s closer to a Pteranodon).

The area is very rich in wildlife with hundreds of wild-boar, roe, chamois, wild goats roaming the area freely on land and bats, eagles, vultures, kites and hawks in the sky. And while the land creatures retire from human view from late May to the autumn, there’s no shortage of activity in the sky even during the tourist season.

That spot at top-left is a griffon vulture, one of the 300 that navigate the currents in the national park. And although the gorges are not the best spot to view them, you can get away with a decent shot even using a short focal length (90mm, the longest lens I carried with me, for the picture below, seen here at almost 100%). 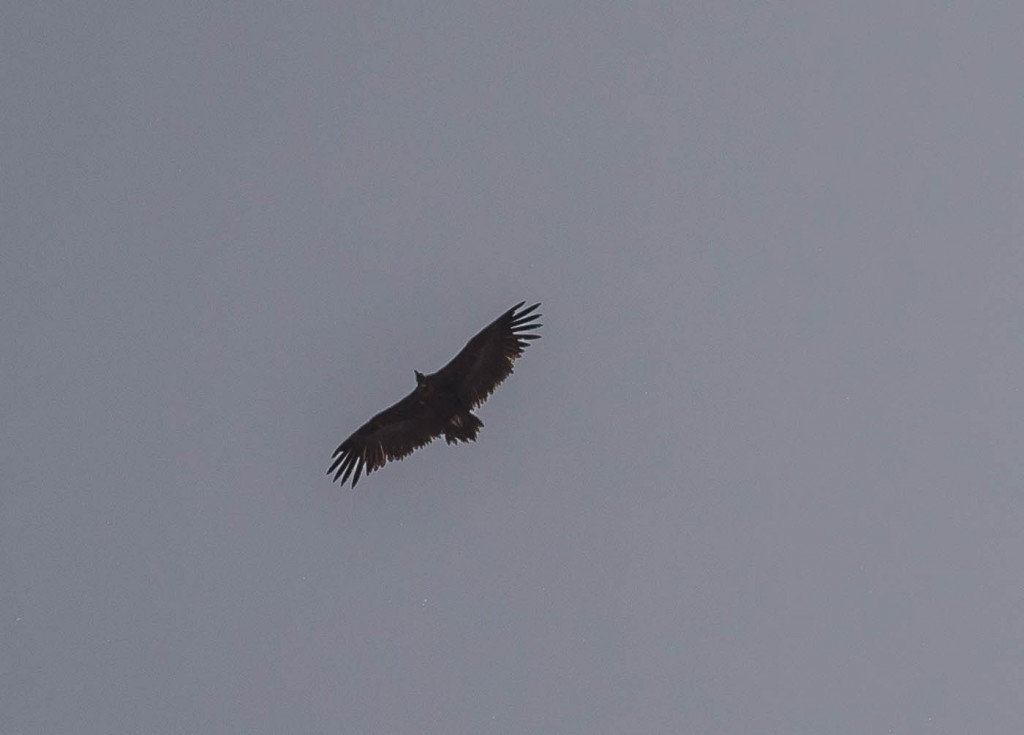 At 700m tall, the Verdon gorge is only half as deep as the Grand Canyon. But it’s also a lot more accessible and fun to walk in. Temperatures will reach 50°C (120° Farenheit) in the summer sun, but there’s a lot of shade to be found and the distances are not so long as to make camping or overnight stays a necessity.

Predictably, then, the Verdon has become prime terrain for outdoor activities of all sorts. Climbers congregate in dozens on the cliffs, and the numerous hiking trails (Sentier Martel, Sentier de l’Imbut, Sentier Vidal, La Charbonnière ….) see their fair share of Vibram all year round. The river itself is out of bounds (the upstream dam releases huge volumes of water without warning) but there’s plenty of safer watersport fun to be had just a few miles downstream. Hang-gliders pepper the skies and photographers abound. It’s a wonderful, wonderful, place to be. 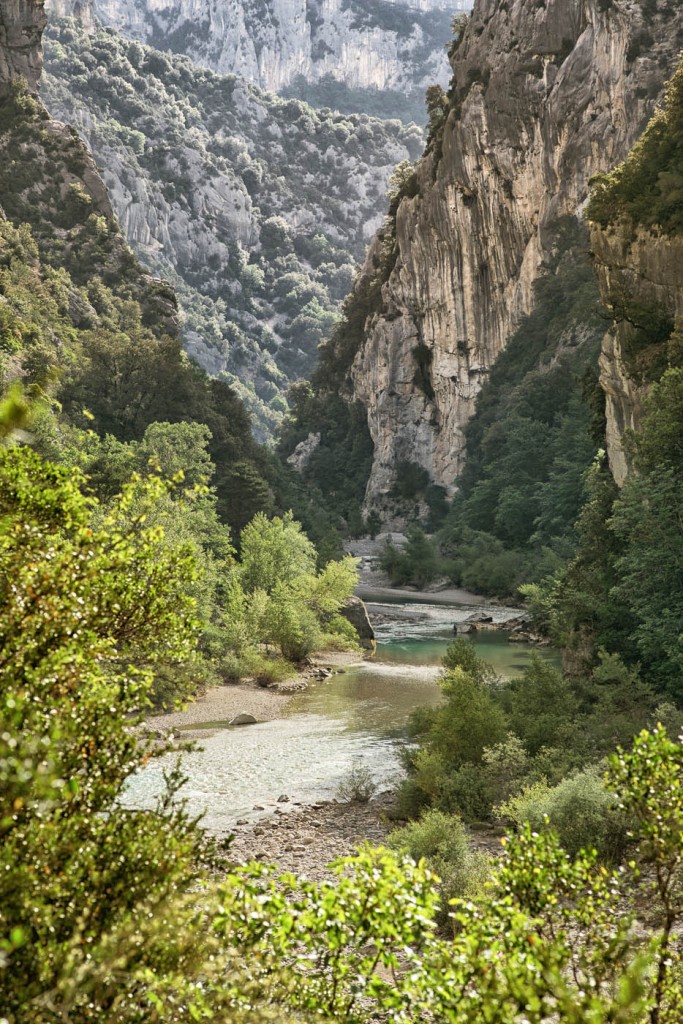 Let me leave you with a few more photographs of the gorges made along three of the walks that follow the river. 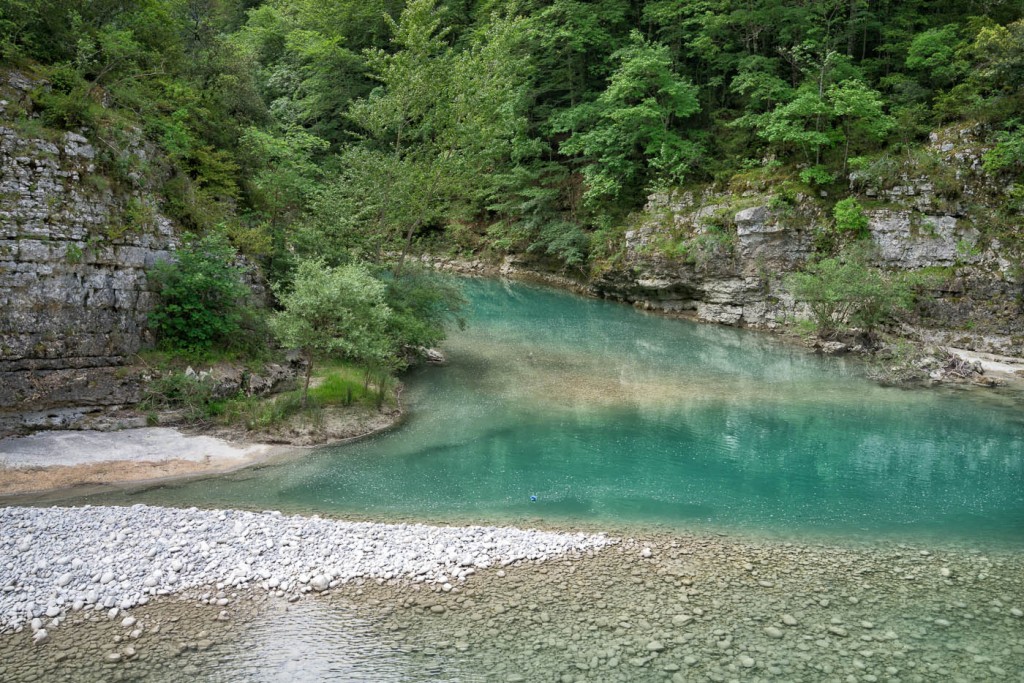 If you’re in the area and walk the gorges, I’d love to hear from you. 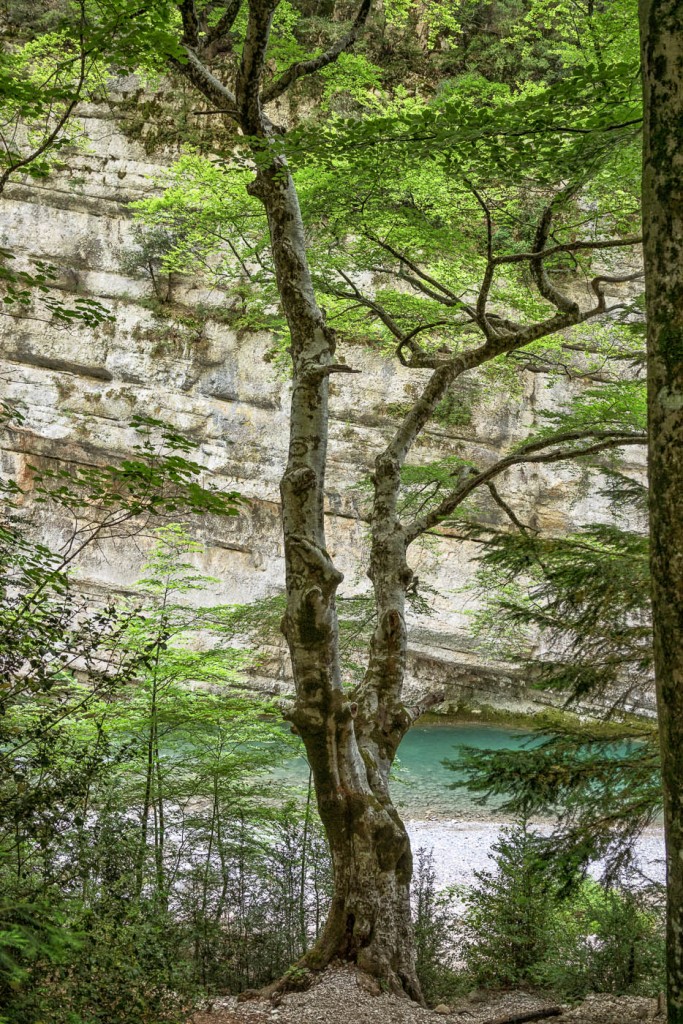 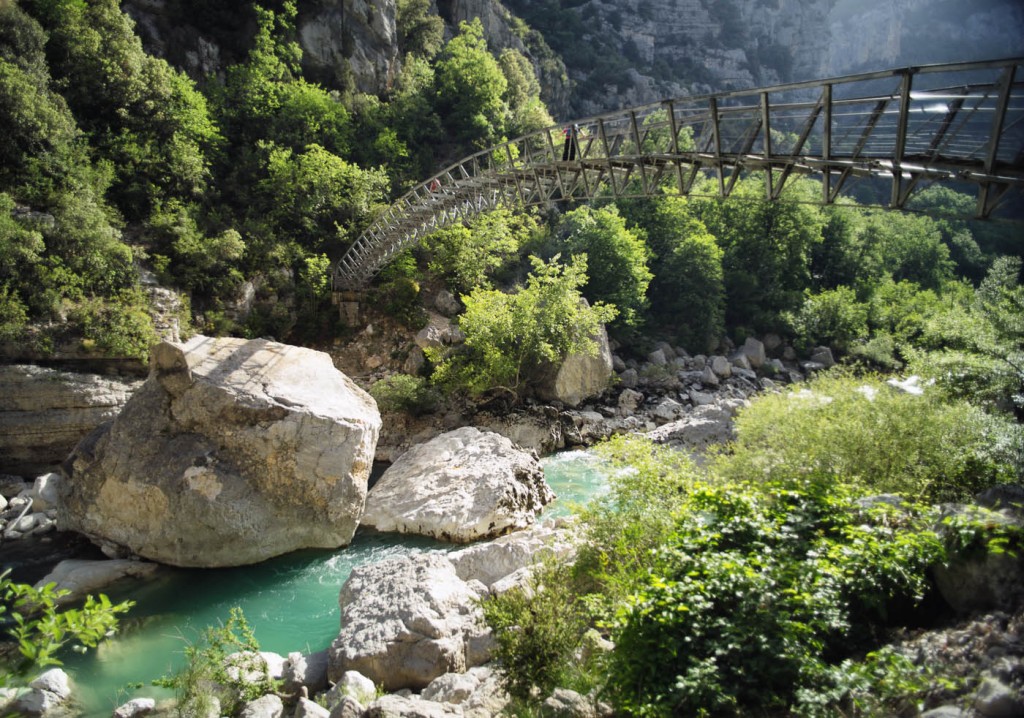