Revered by over a billion people – adherents of Hinduism, Buddhism, Jainism and Bon – the holy mountain of Mount Kailash is not on the way to anywhere else. Instead, it lies at the centre of the mystical, spiritual and geographic universe.

Tibetans refer to the mountain as Gang Rinpoche – the Precious Jewel of Snow; to the Bonpo it is the abode of Tonpa Shenrab Miwoche; Hindus believe it is the throne of Shiva; and the religious founder of the Jains – Rishavdev – attained Nirvana at the mountain. The ancient gods of ZhangZhung ascended to heaven here on ‘sky cords’.

Tectonically, the Yarlung Tsangpo (Brahmaputra River) – which rises a few kilometres south of Mount Kailash – forms the suture zone separating India from the Eurasian land mass. This river valley runs across the southern edge of the Tibetan plateau for 2000 kilometres.

Four of Asia’s mightiest rivers have their headwaters in the immediate vicinity of Mount Kailash: the Indus, Yarlung Tsangpo, Karnali and Sutlej. 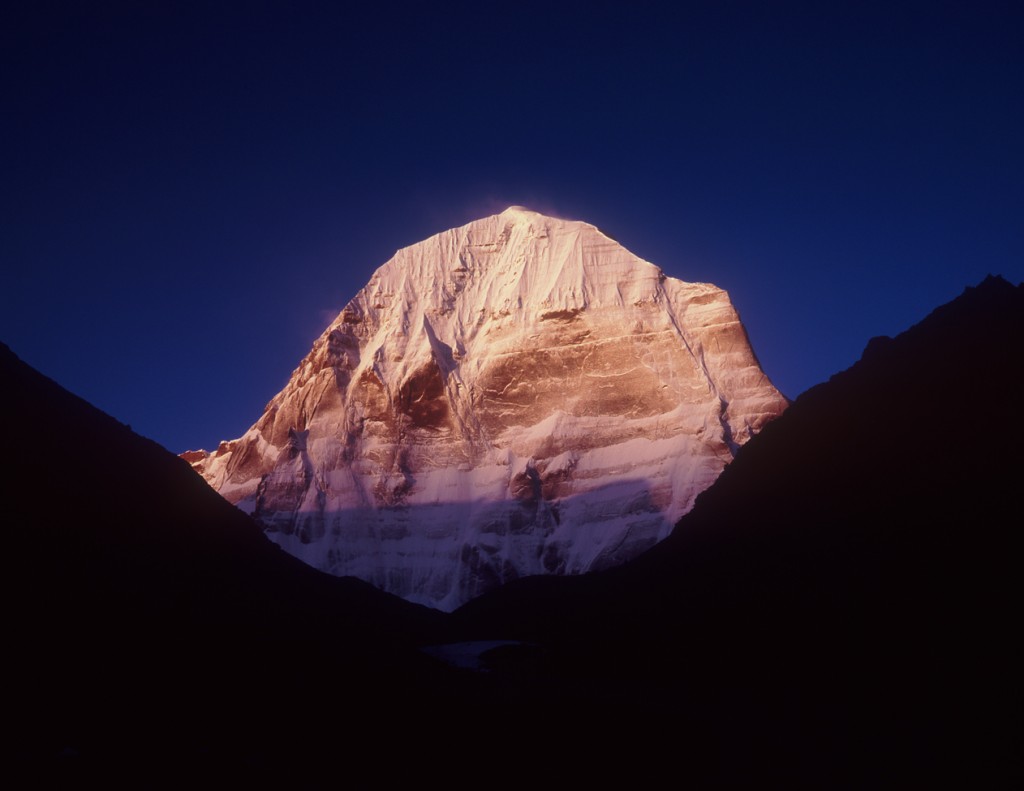 The north face of the holy mountain shot in the brief pre-dawn glow, with spindrift blown from the summit. Fuji GW690, Fuji Velvia 100.

At 6638 metres, Mt Kailash stands alone at the top of the Gangdise Range, with its four distinct faces. Climbing the holy mountain has occasionally come under consideration in recent decades, but has consistently been rejected by the elite climbing community:

“If we conquer this mountain, then we conquer something in other people’s souls. I would suggest they go and climb something a little harder. Kailash is not so high and not as hard,” Reinhold Messner, one of mountaineering’s all-time greats, is reported to have said.

In his 1993 publication The Art of Adventure Photography, Galen Rowell used a nine-tier zone system to classify destinations according to their condition and the impact of tourism on the experience they offer. Mount Kailash rated the top-level for him at that time. While the destination may have slipped in the rankings, few remain untouched by the magic of the area – and crowds will always be deterred by the challenging altitude and climatic conditions.

The attraction of Mt Kailash is such that this year (2014) it is off-limits to western tourism until late in the season, perhaps September-October – an encouraging sign the authorities are serious about protection of the physical environment and cultural values. 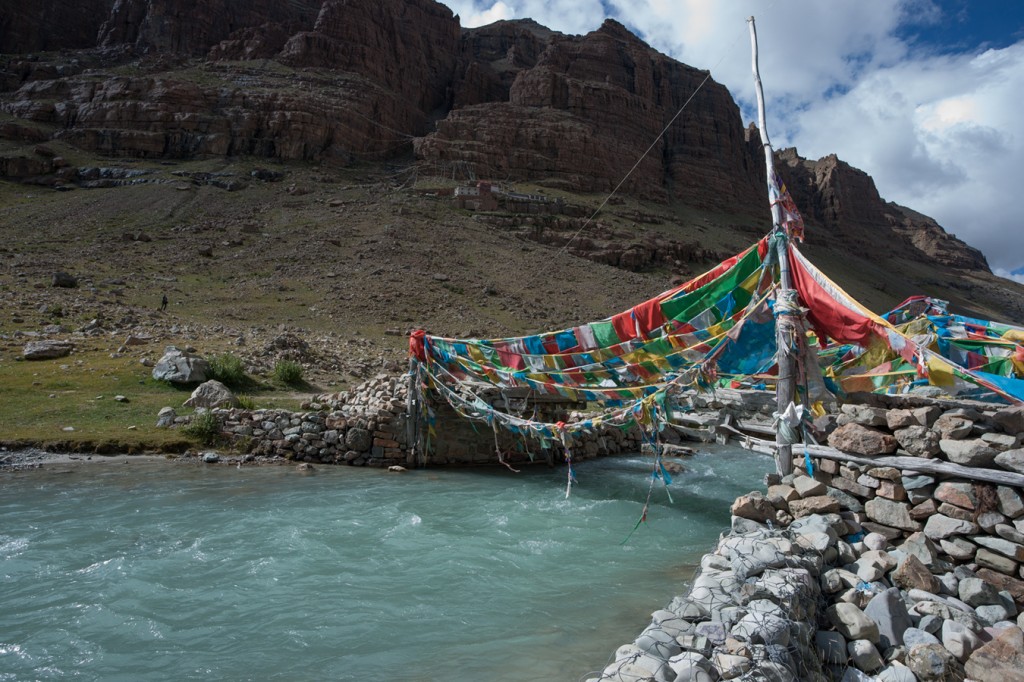 Tibet was a closed society until recently – taken together with the very high altitude, harsh climate and sheer remoteness, this ensured that very few travellers were able to visit the holy mountain until the past two decades. Surface transport to the area was extremely arduous – truck convoys carrying pilgrims from Lhasa may take weeks to arrive, as the only road was a sandy track that traversed a large number of river crossings which were subject to frequent washouts.

Change has come very quickly in the past few years – the old track is now a two-lane blacktop, all river crossings are over concrete bridges, and the service town of Darchen now has rapidly improving accommodation options. 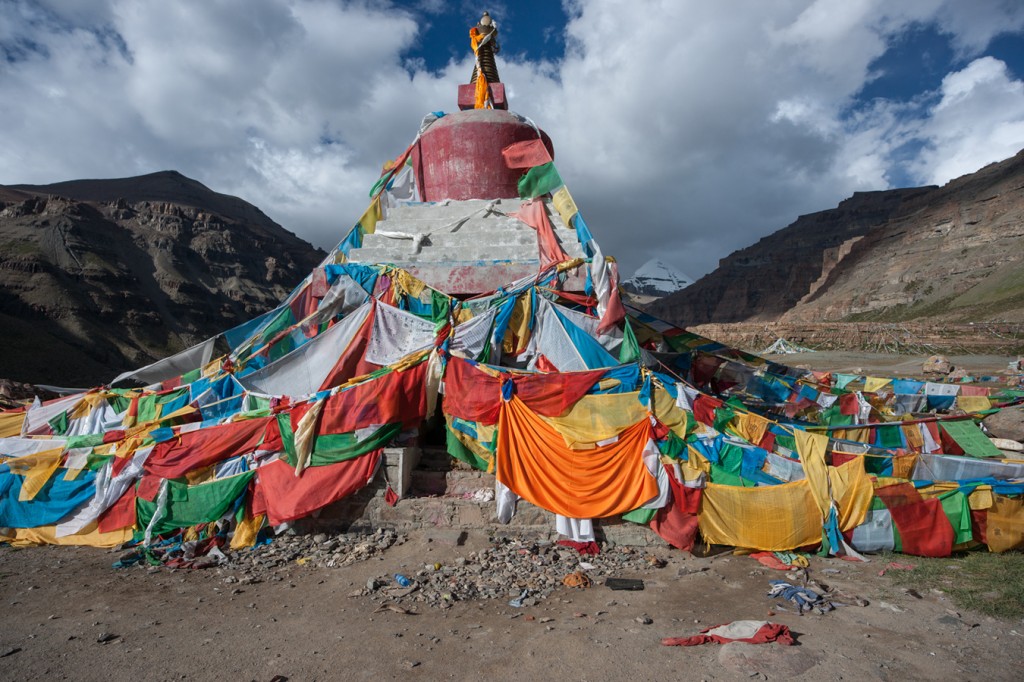 Chorten in Lha Chu Valley, with Tarboche and Mt Kailash in the background. Sony a900, Contax Distagon 21mm f2.8

While the area is dominated by the holy mountain and Lake Manasarovar, the entire region is of great historic importance and is physically spectacular. Immediately to the south is the Great Himalayan Range in the form of the multi-peaked massif of Gurla Mandata (7728m), and behind it is the historic border town and seat of the ancient kingdom of Purang. To the west – in the Sutlej Valley at Zanda and Tsaparang – lies the amazing Guge Kingdom, where a thousand years ago King Yeshe O engineered the second diffusion of Tibetan Buddhism after an extended period of chaos and warlordism. To the north is the heartland of Ngari and the Indus Valley – the Indus River flows into nearby Ladakh and Pakistan. 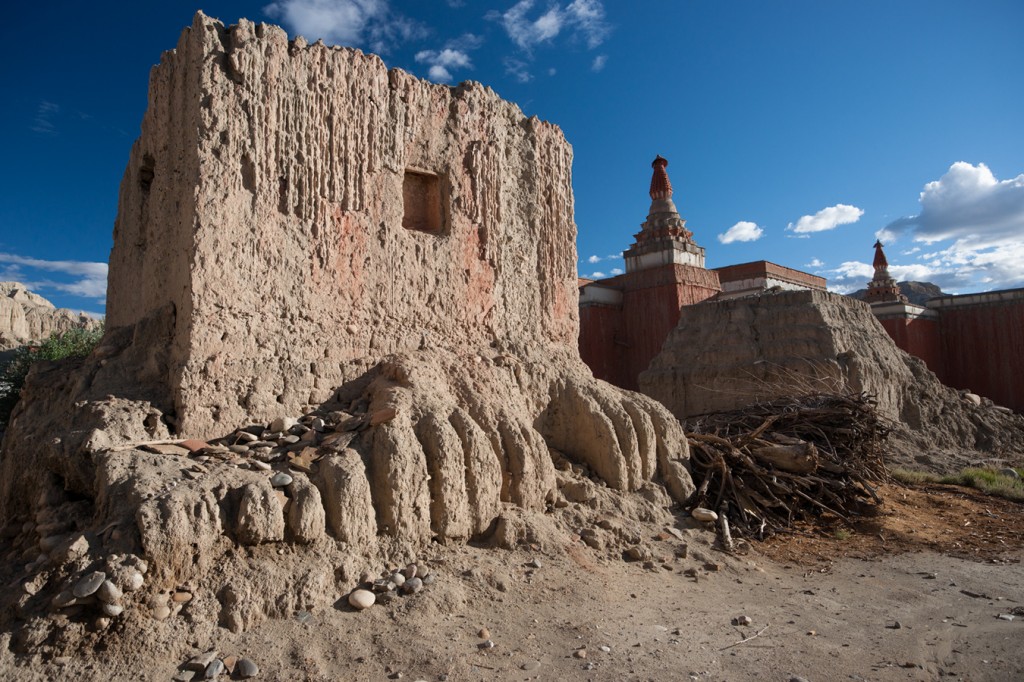 Tibetan Buddhist societies have an almost diametrically opposed attitude to death compared to the western view. For them it’s simply another state of being, one that is ever-present on the journey of life.

Mt Kailash is considered a particularly auspicious place for life to end – at least in the physical sense. Walking the Kora brings the trekker into contact with small groups of joyous Tibetans, many of them tough elderly people.

It’s an infectious experience, heightened by the dizzying altitude – the Kora seldom drops below 5000 metres, and climaxes with the crossing of the 5630 metre Drolma La – dedicated to goddess Tara. 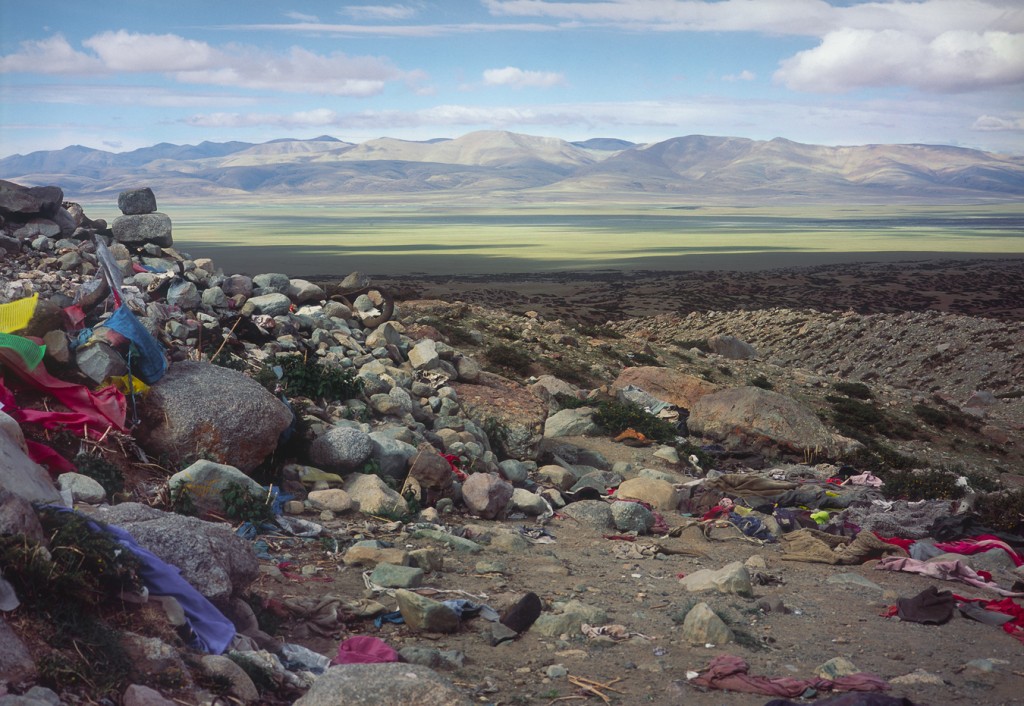 One walks the Kora as one wanders a half-remembered but familiar path, last seen in childhood. Despite the difficult environment, pilgrims are surrounded, uplifted and swept along by the thousands upon thousands who have come this way over the millennia. It’s an experience unlike any other, more a homecoming than a victory over a physical foe, as seen in the western obsession with conquering high mountains.

Bitter cold is very often a constant at these altitudes. The Lha Chu River froze during the first night spent in my mountain tent. Towards dawn, my feet felt heavy, like a weight was pressing down on them. It turned out that one of the dogs that frequently ‘adopt’ walkers along the Kora had snuggled up to me at the foot of the tent. Dogs are generally looked after in Tibetan monasteries, as they are believed to be reincarnations of failed monks, and this unusually self-aware canine trotted alongside on the 600 metre climb to the high pass.

The Kora circumambulation traverses 52 kilometres, with Darchen as its start and end points. Large numbers of Tibetans do the Kora in one long day, commencing at 4am and returning in the dark of evening. The most devout cover the distance in prostration, taking around three weeks to complete the journey. 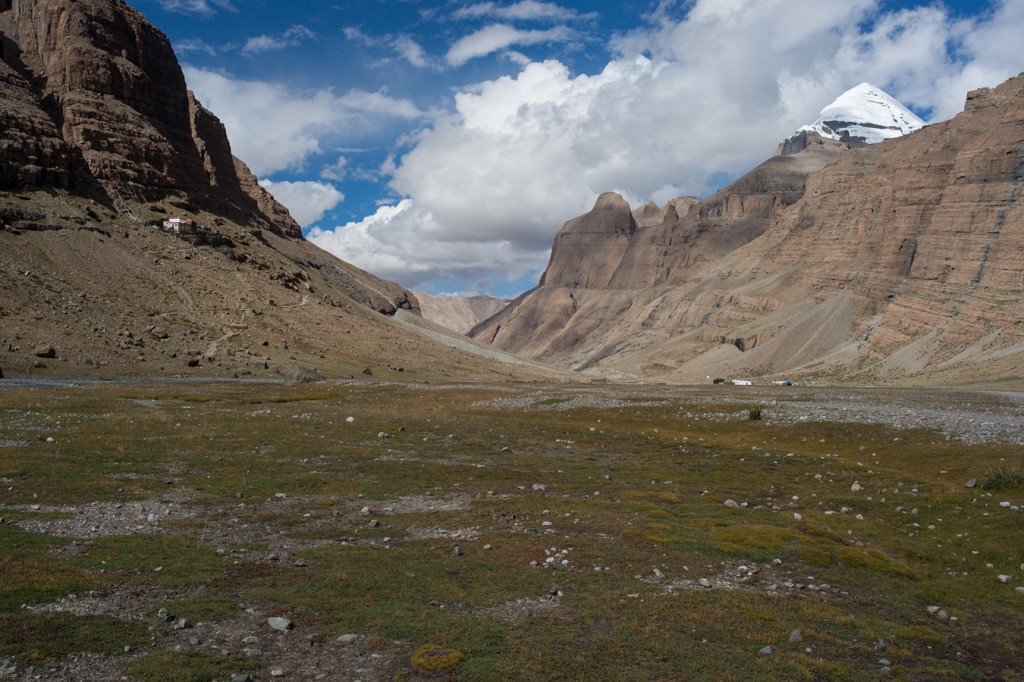 The view northwards up the beautiful Lha Chu Valley, hemmed in by huge cliff buttresses and overseen by the holy mountain. Sony a900, Contax 35-70mm f3.4

The Kora sidles over a low ridge before dropping into the wonderful Lha Chu Valley, which steadily rises on the journey northwards to Drira Puk Gompa.

The Kora is overseen by several small but historic gompas, the first of which is Choku Gompa, located not far from the first tea tents. A stiff 20 minute climb reaches the exquisitely situated monastery high above the valley floor. This gompa provides vistas to both the holy mountain and the holy lake. 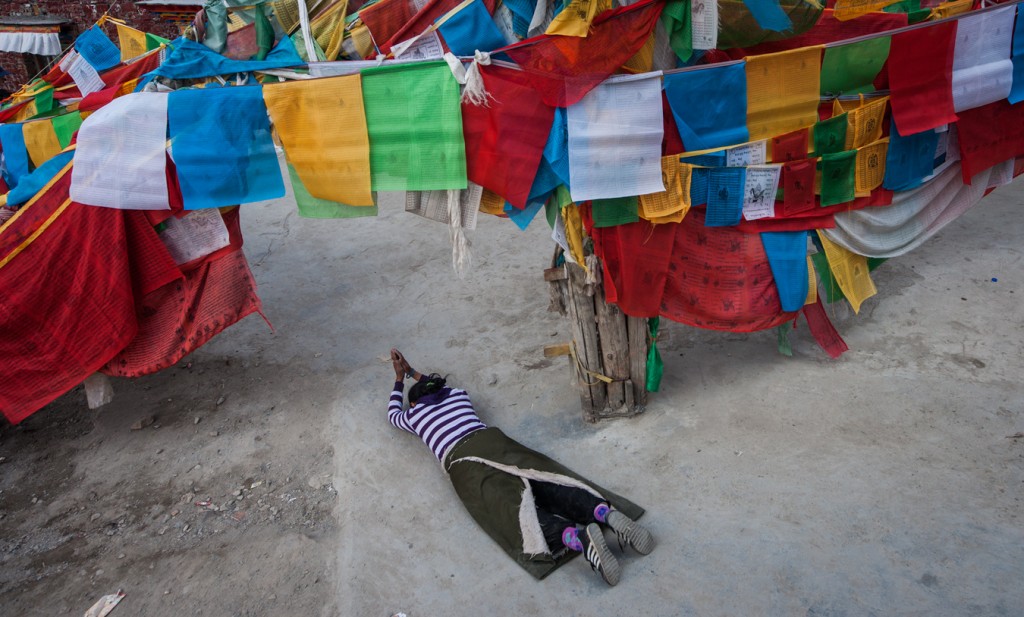 Given the upsurge of interest from westerners, Indian pilgrims and Chinese tourists, the area is now being adapted to their needs: an enclave of low impact demountable cabins has been erected at the mouth of the Lha Chu Valley for Indian pilgrims preparing to undertake their Parikrama; an ‘eco bus’ now ferries visitors to the foot of the climb to the Drolma La; more luxurious electrified guest houses are now located at the main overnight area at Drira Puk.

The north face of Mount Kailash, as viewed from this vantage point, is one of the most celebrated sights in Tibet. The sheer 1500 metre rock face is just a two-hour walk away, alongside one of the mountain’s fine glaciers – the Kangkyam. 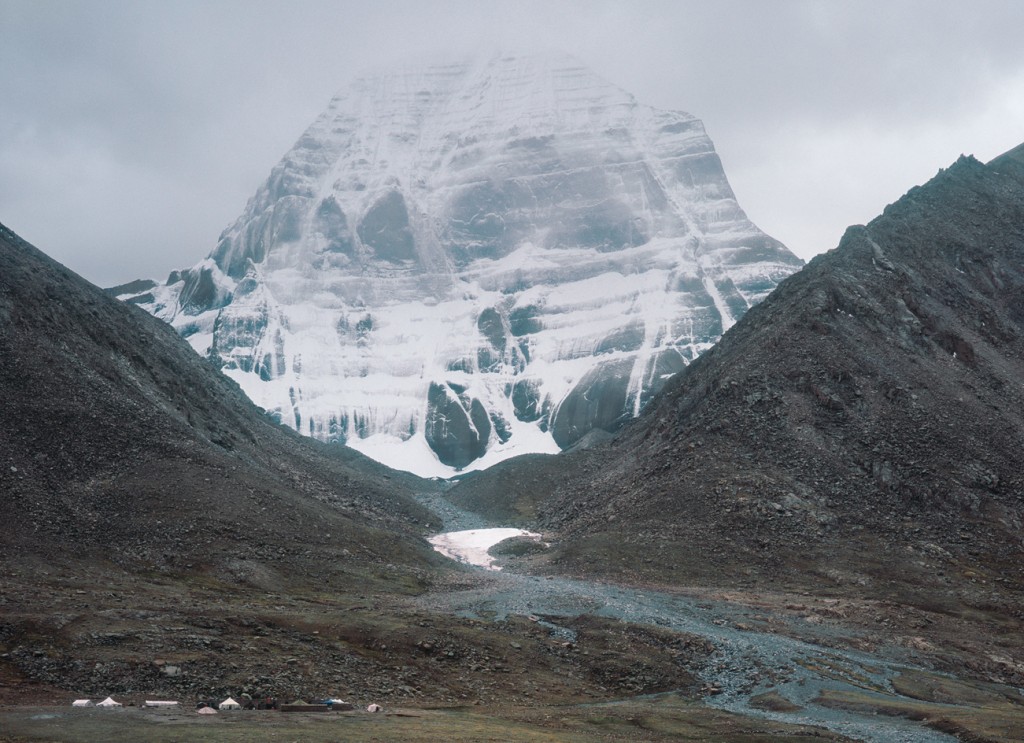 Few visitors ever forget the first moment they lay eyes on Lake Manasarovar. Because the air and light quality is celestial in this area, the slightest change in intensity is sharply seen and affects the perceptual system. Lake Manasarovar glows a bright cobalt blue. 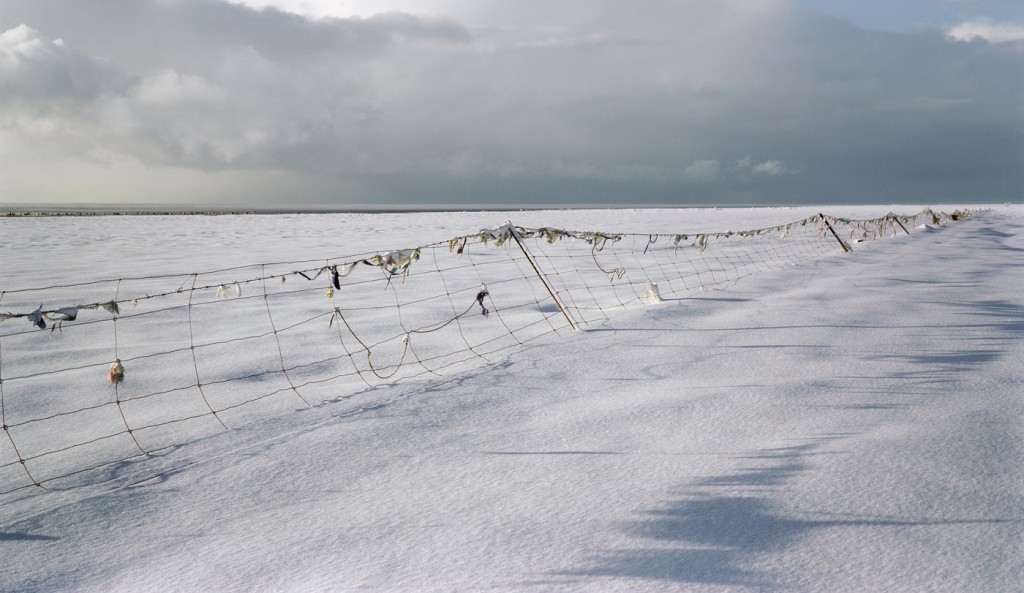 Itself the centre of a 110 kilometre pilgrimage Kora, the 4575 metre high lake is widely regarded as the highest fresh water lake in the world, and is looked over by five gompas – most conspicuously, Chiu Gompa (little sparrow) which sits at the crest of a small rocky crag in full view of the holy mountain some 40 kilometres in the distance. Chiu has an otherworldy aura – days spent here feel like time stolen from another lifetime one has lived. 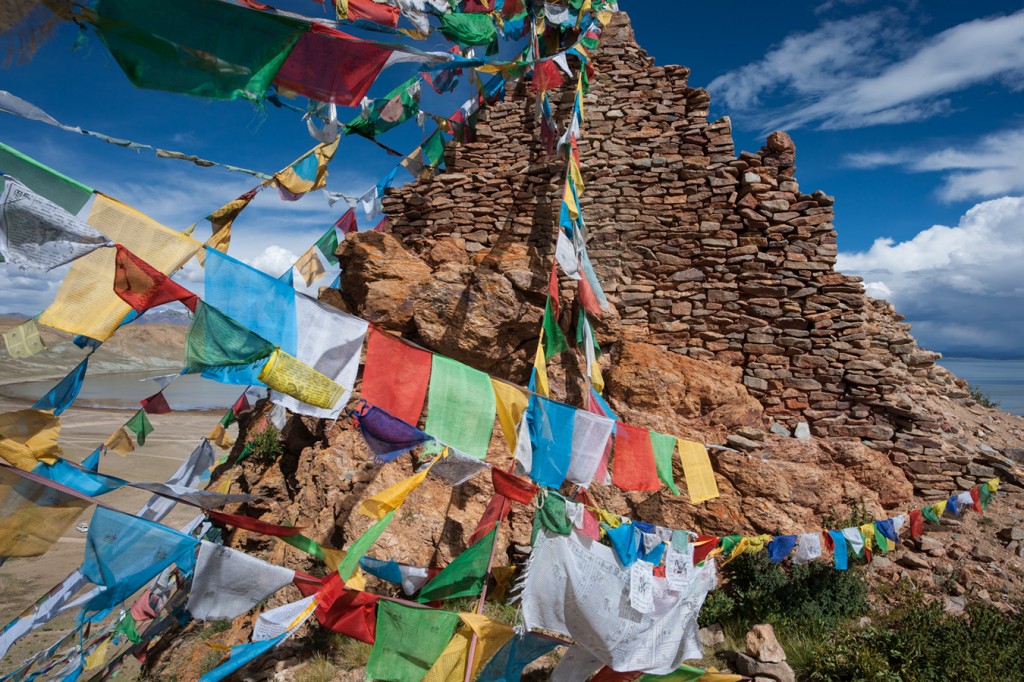 A small outlet creek from the lake at this place eventually becomes the major waterway of the Sutlej River; downstream are the ancient Tholing and Tsaparang complexes. Nearby are troglodyte settlements associated with the primeval kingdom of ZhangZhung – these are only now receiving academic archeological attention. 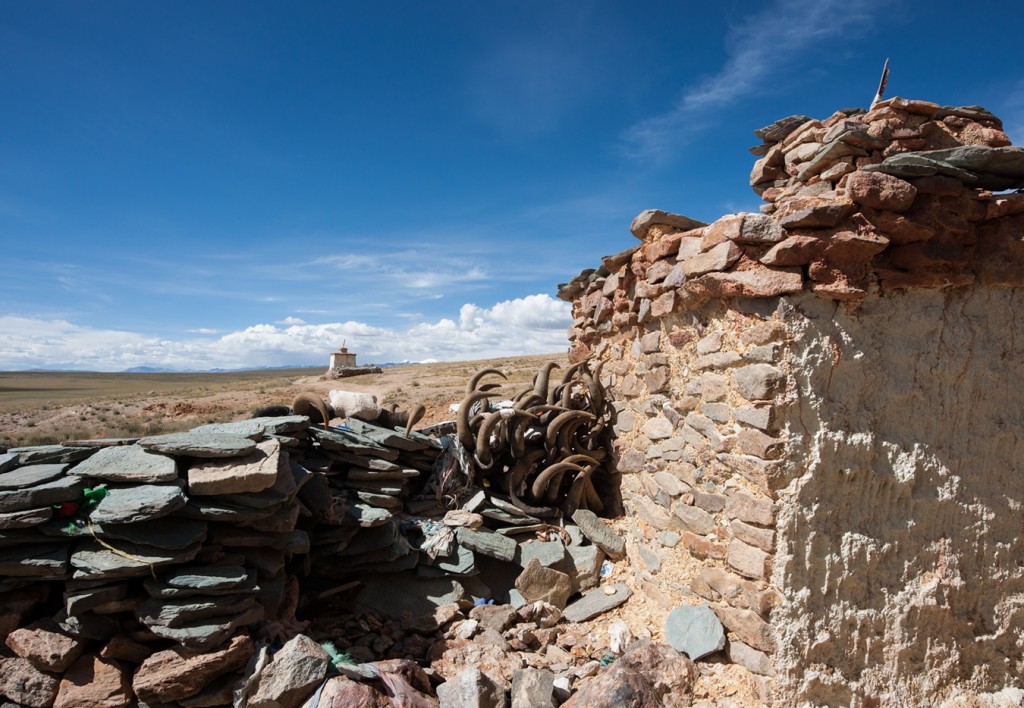 At the other side of the lake lies small but attractive Trugo Gompa, where pilgrims take a brief dip in the lake and enjoy the open vistas in all directions. 7728 metre tall Gurla Mandata rises just a few kilometres southwards from here – the world’s 34th highest peak. 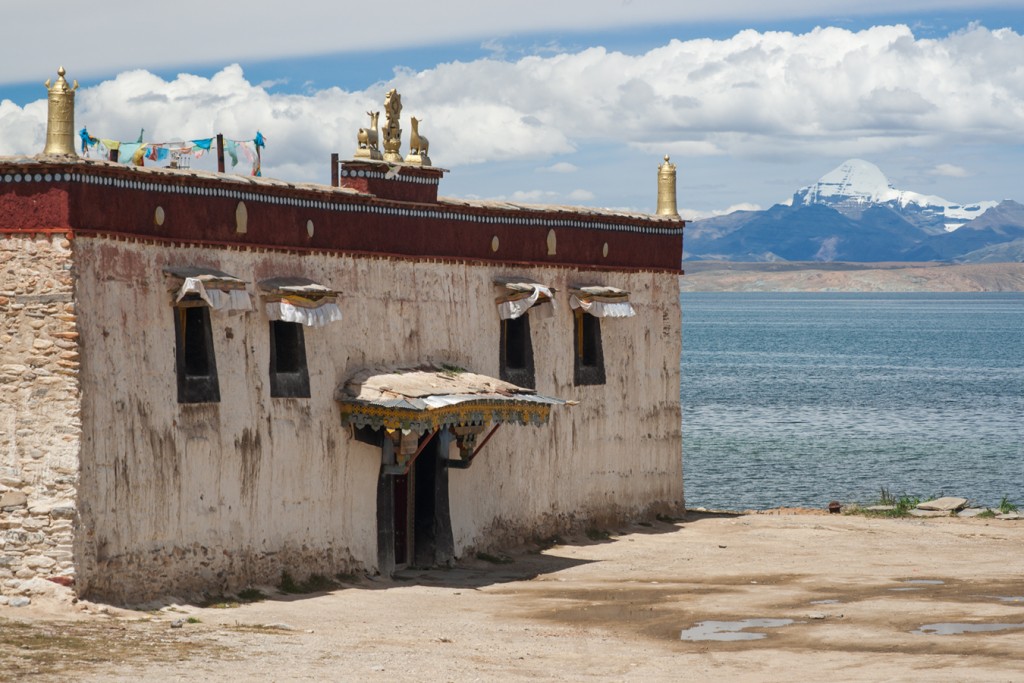 Previous Post #241. Ilulissat – evening shoot amongst the icebergs (1) Next Post #243. In Provence, Postman Patrick Has a Sense of Humour