The ingredients are simple. But as with all Camargue food, the taste is strong.

Take one bullring. Not Sevilla or Nimes. A small village arena frequented only by the locals in a tiny area of France located around the Rhône delta and preferably beaten by a scorching sun.

Water until not slippery.
Add a sprinkling of fine young men in  white pants. 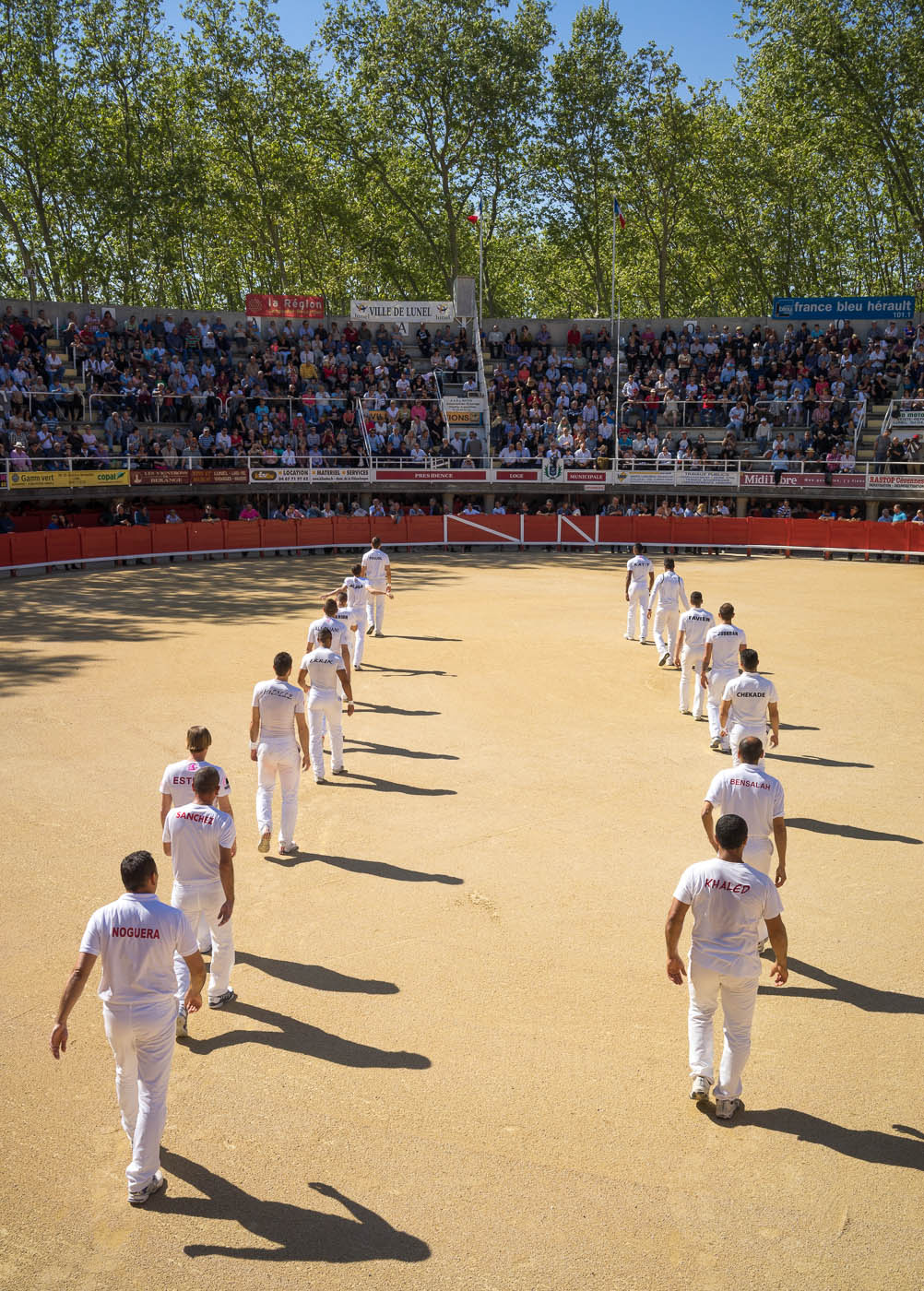 For those about to run, We salute you (c) Pascal Jappy – DearSusan

Finally, stir things up with a bull.

The bulls used are not the stocky type you find in corrida. They measure about 1m30, weigh around 500 kg and are very vigorous and proud looking. They are not domesticated and live wild in the marshlands of the Camargue and Crau, herded by 200 farms called Manades. The breed has survived only thanks to its ability to participate in this game. 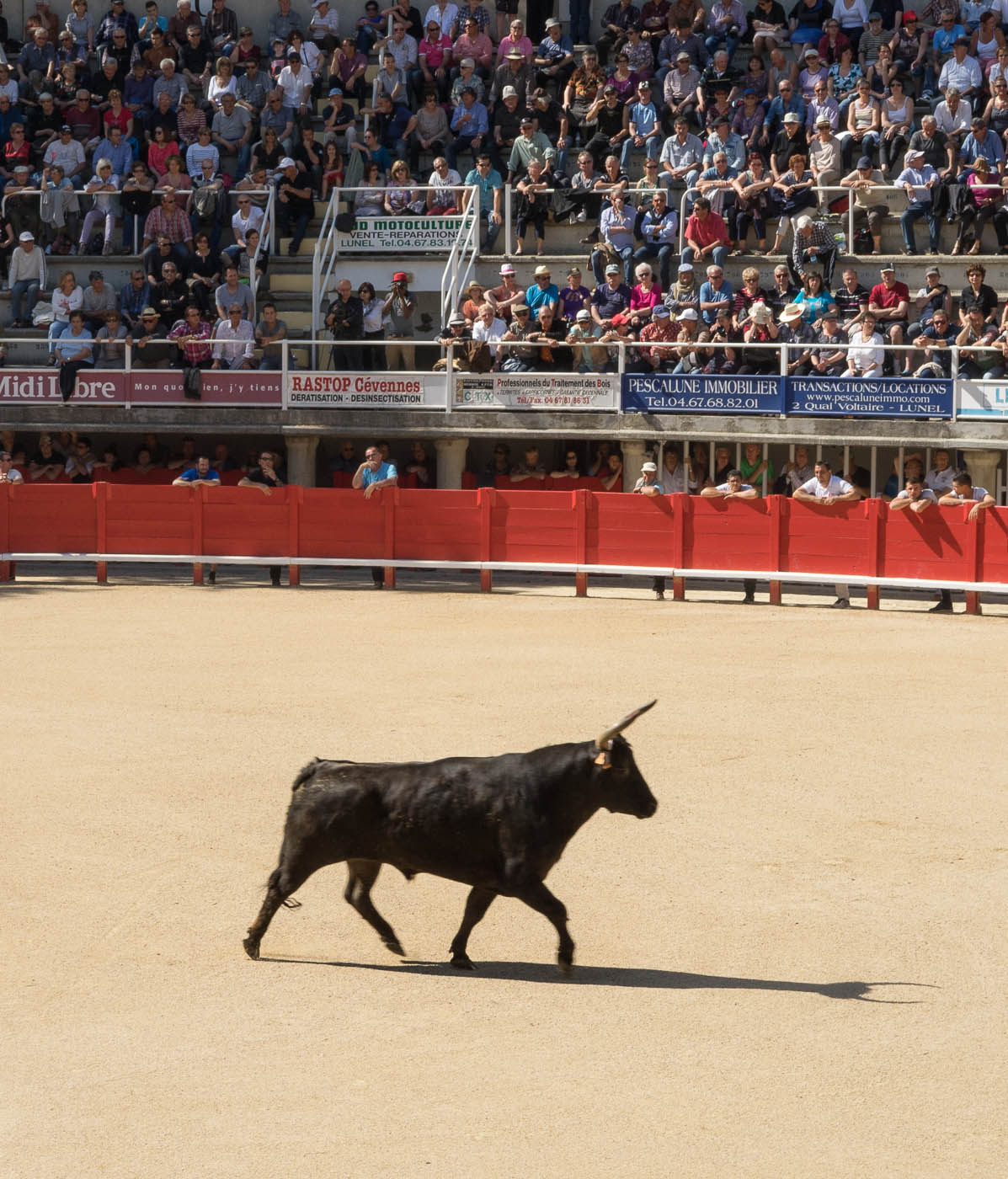 The star of the show (c) Pascal Jappy – DearSusan

The rules are also simple, but there is real strategy to the game.

This regional sport, called Course Camarguaise, opposes 4-20 humans (there are female exponents) to a bull and no one usually gets hurt.

The men (in this race) in white are either raseteurs (their names are written in black) or tourneurs (names in red).

The former use a claw-like tool to catch small ornaments (the cocarde and the glands) attached by strings to the bull’s horns. Each successful move is worth prize money: ornaments are initially worth 50€ but are constantly being auctioned by shops, town halls and restaurants as combined support to the sport and the visibility of local businesses.

After the main ornaments have been removed, the attaching strings remain and are the most difficult trophy to separate from the horns. Consequently, they can reach much higher value and the record during this early race in Lunel was 700€ for the final string.

The race stops after 15 exhausting minutes or earlier, if both horns have been stripped clean by the raseteurs. 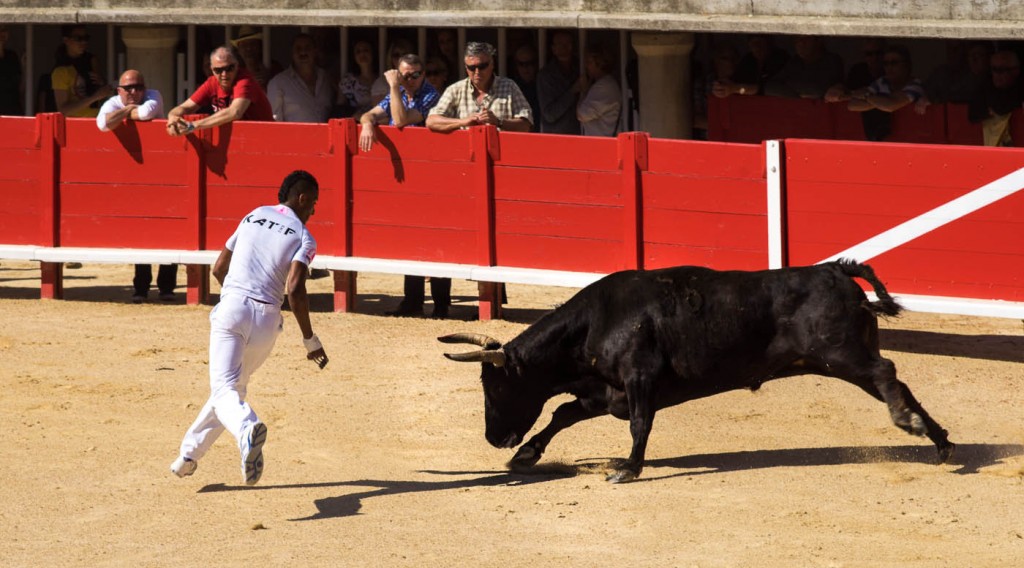 In order to get so close to the bull in relative safety, the raseteur (literally the skimmers) run from behind the bull tangentially to its line of sight and extend their arm when the bull charges and their respective trajectories meet. 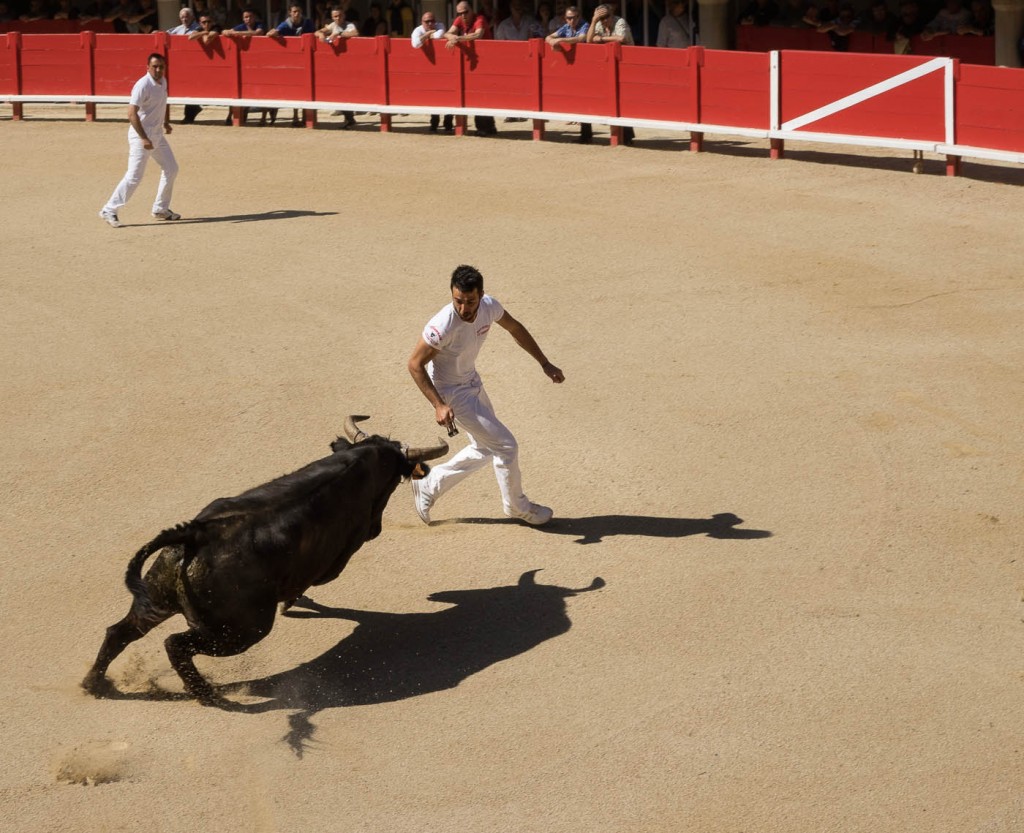 Would you like to be that man? (c) Pascal Jappy – DearSusan

This is where the tourneurs (the turners) come into play. It is their job to catch the bull’s attention and orient it correctly so that their raseteur can begin his dash in the best possible conditions. 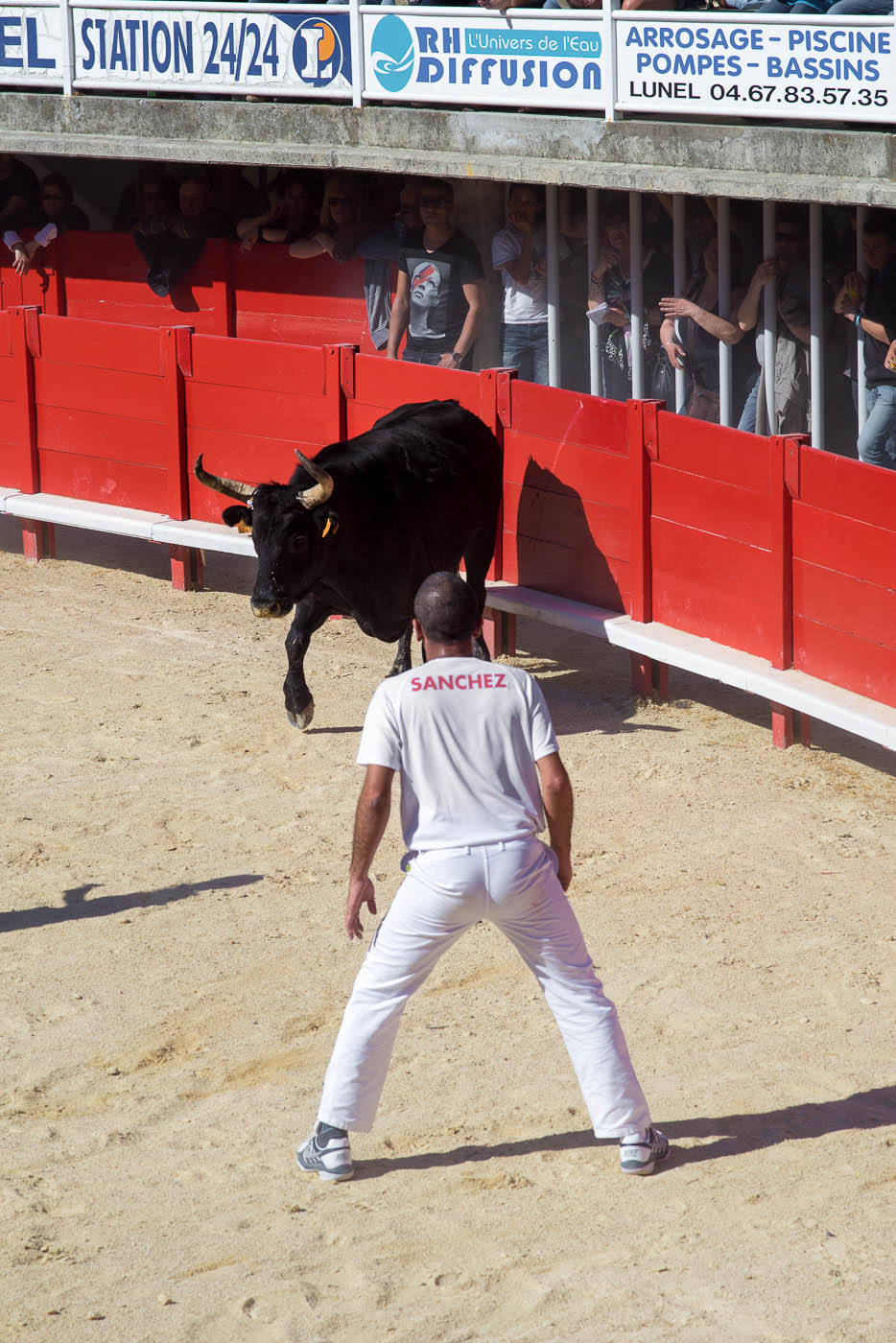 In spite of this preparation, the run past the bull is always a tense moment for the raseteur and the public.

And, of course, what every spectator has paid for is the mad scampering for safety after each attempt at rasetage, which always leads to spectacular acrobatics that often prove as dangerous as the bull itself. 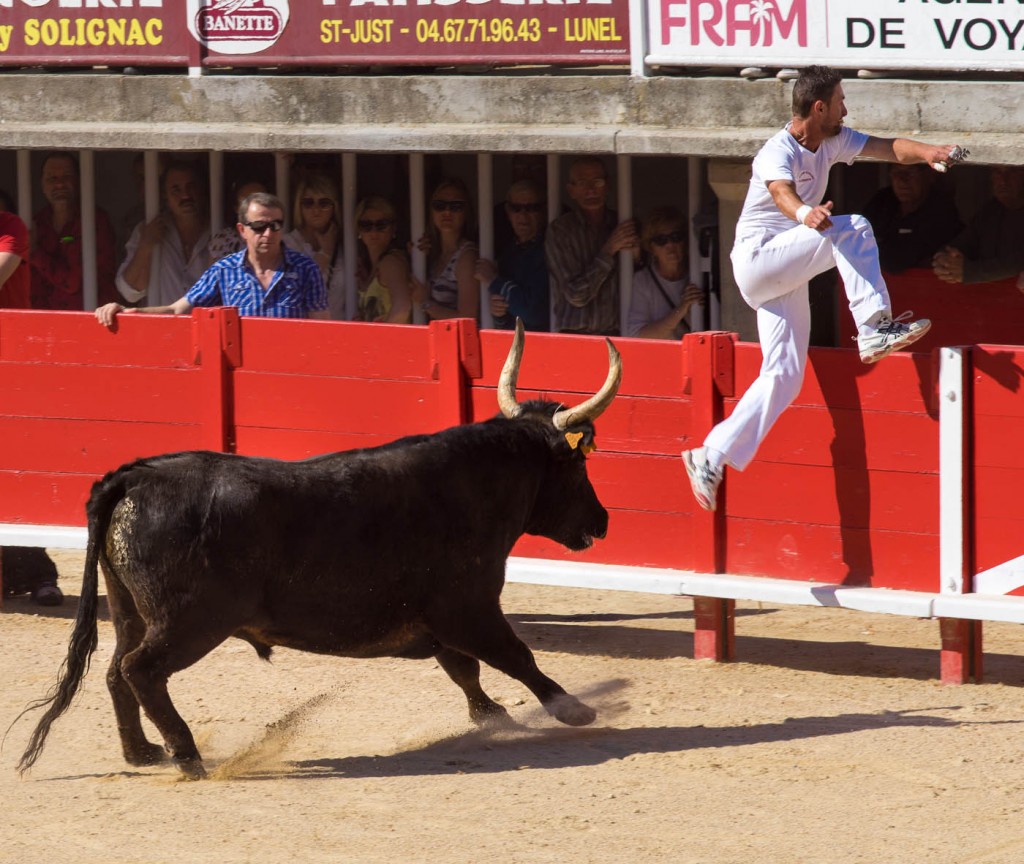 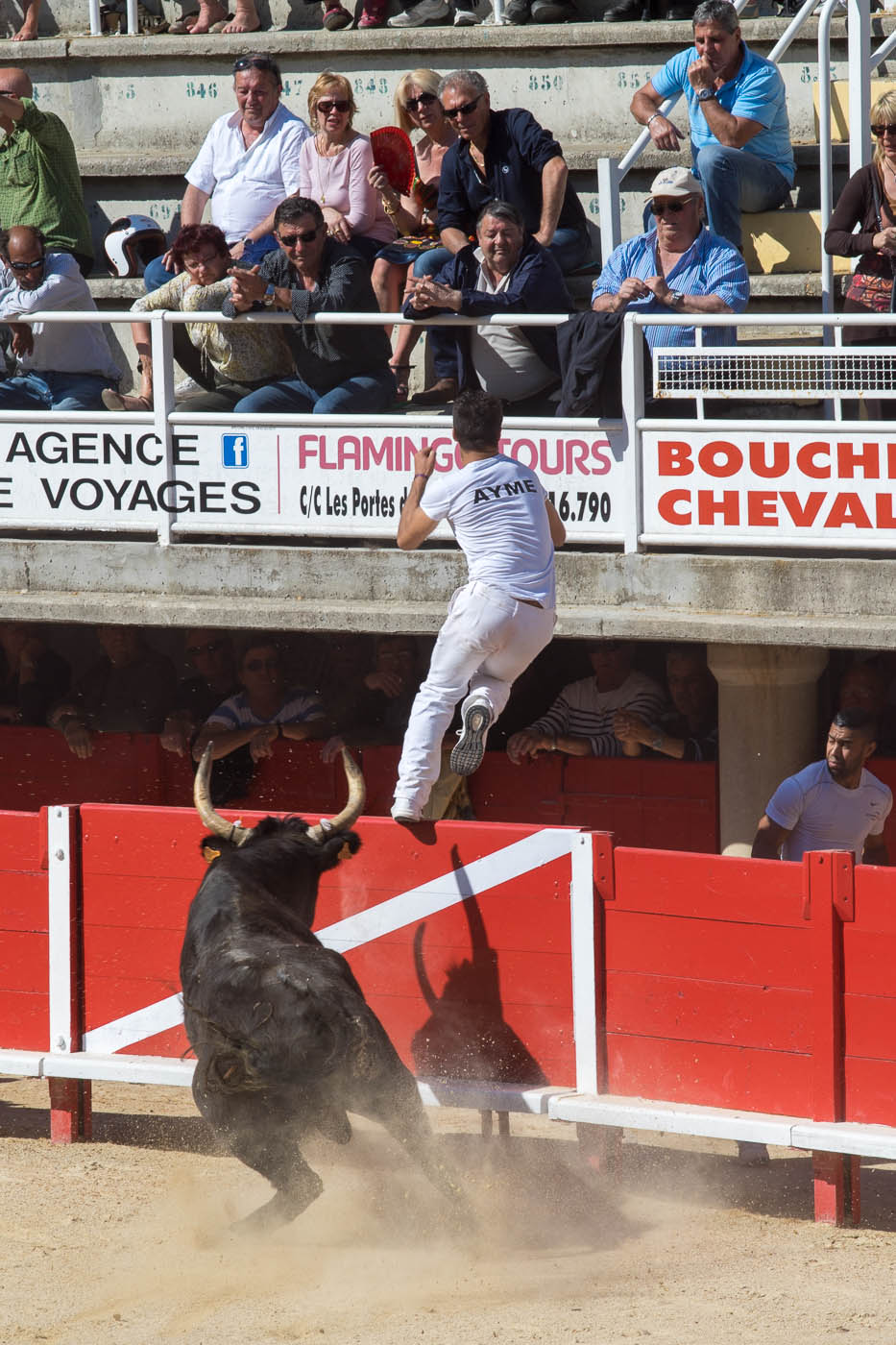 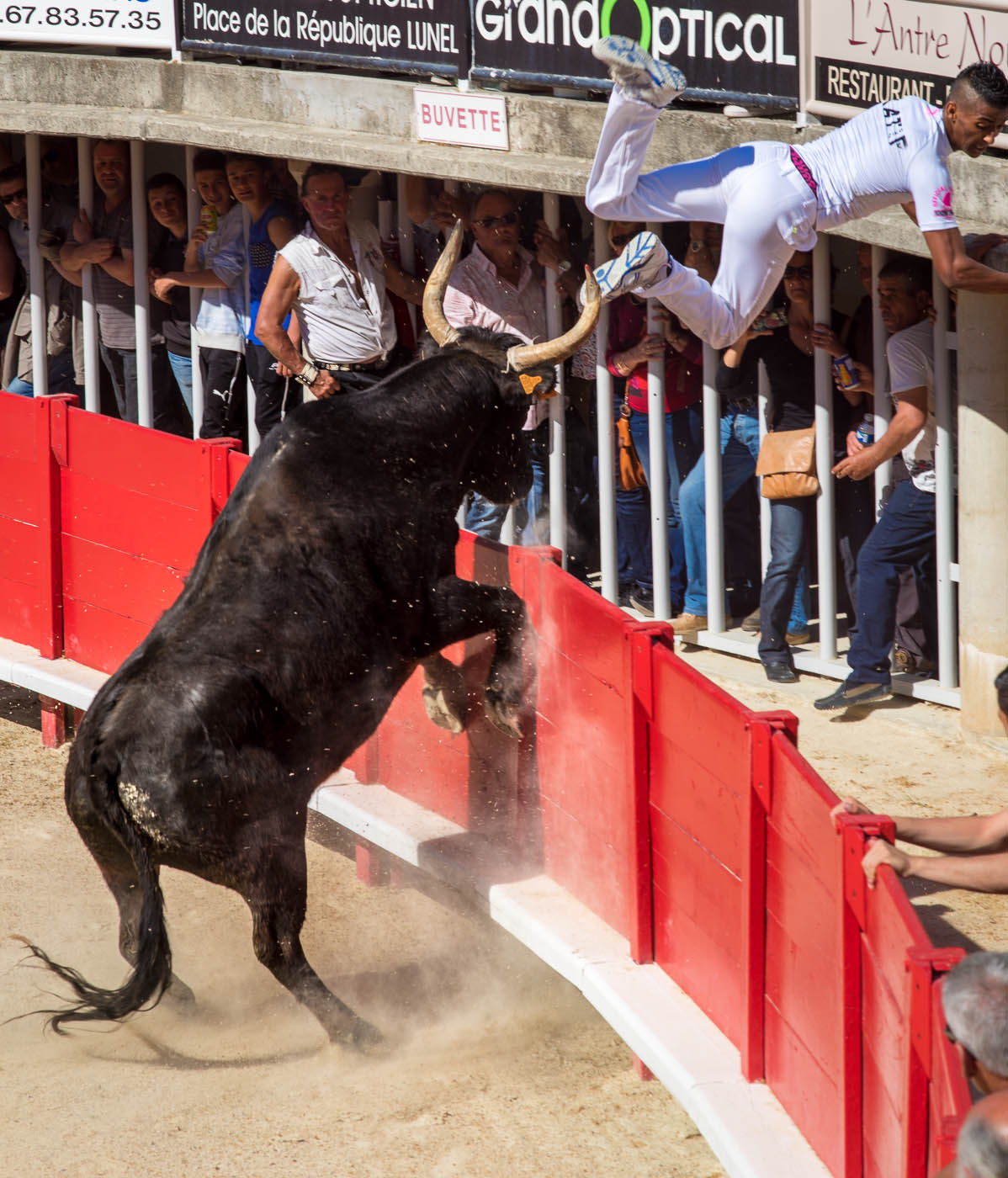 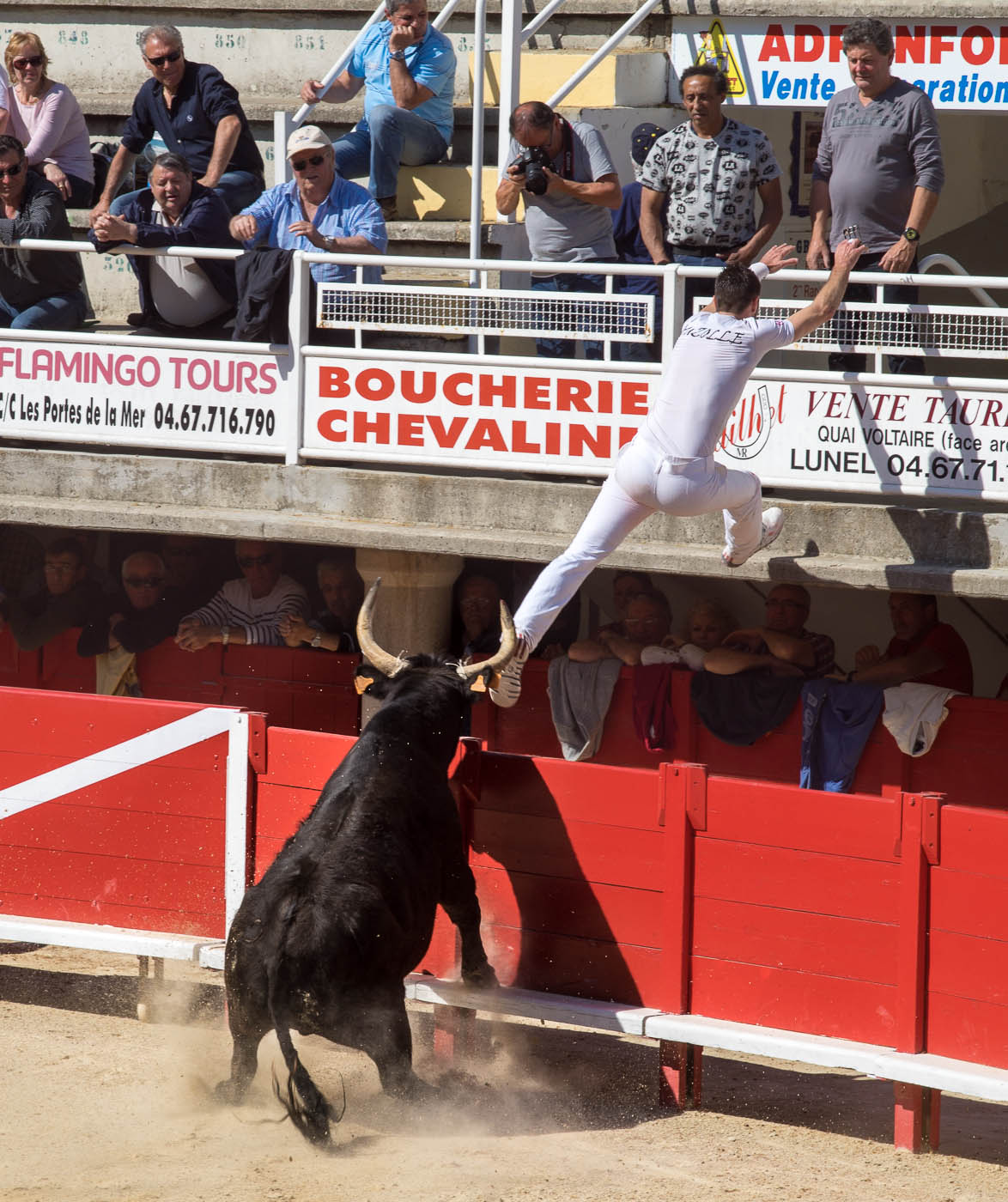 Auzolle stepping up to the challenge (c) Pascal Jappy – DearSusan 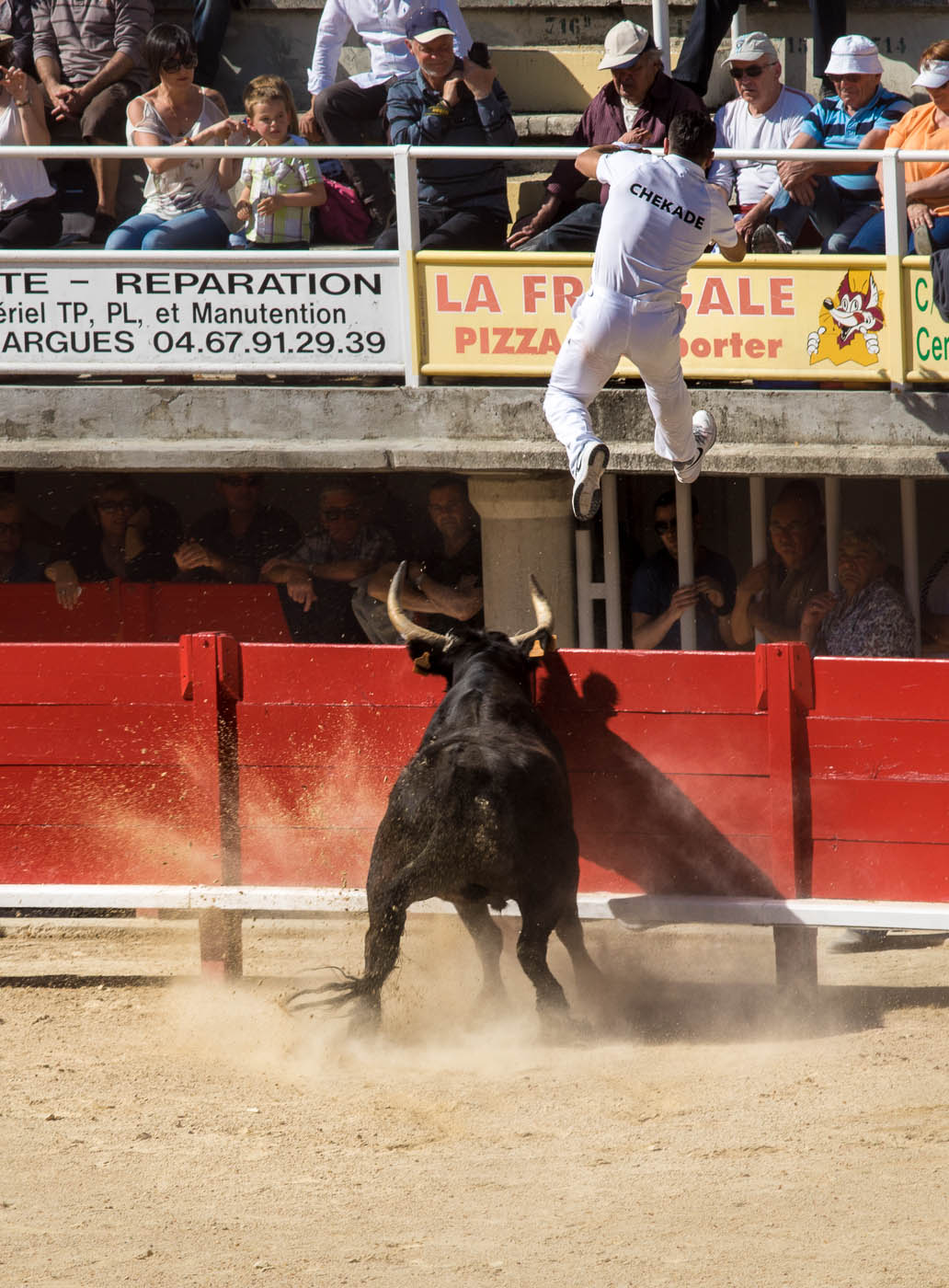 These guys have to be very fit and very brave.

Last year, Katif, one of the major stars of the sport, was carried out unconscious for immediate surgery after a bull caught his leg and prevented his escape. Other competitors eventually managed to get him out of harm’s way but not before a severe battering on the ground. And while the ambiance is very cheerful, it is obvious on the raseteur’s faces that the awareness of danger is constantly present in their mind. 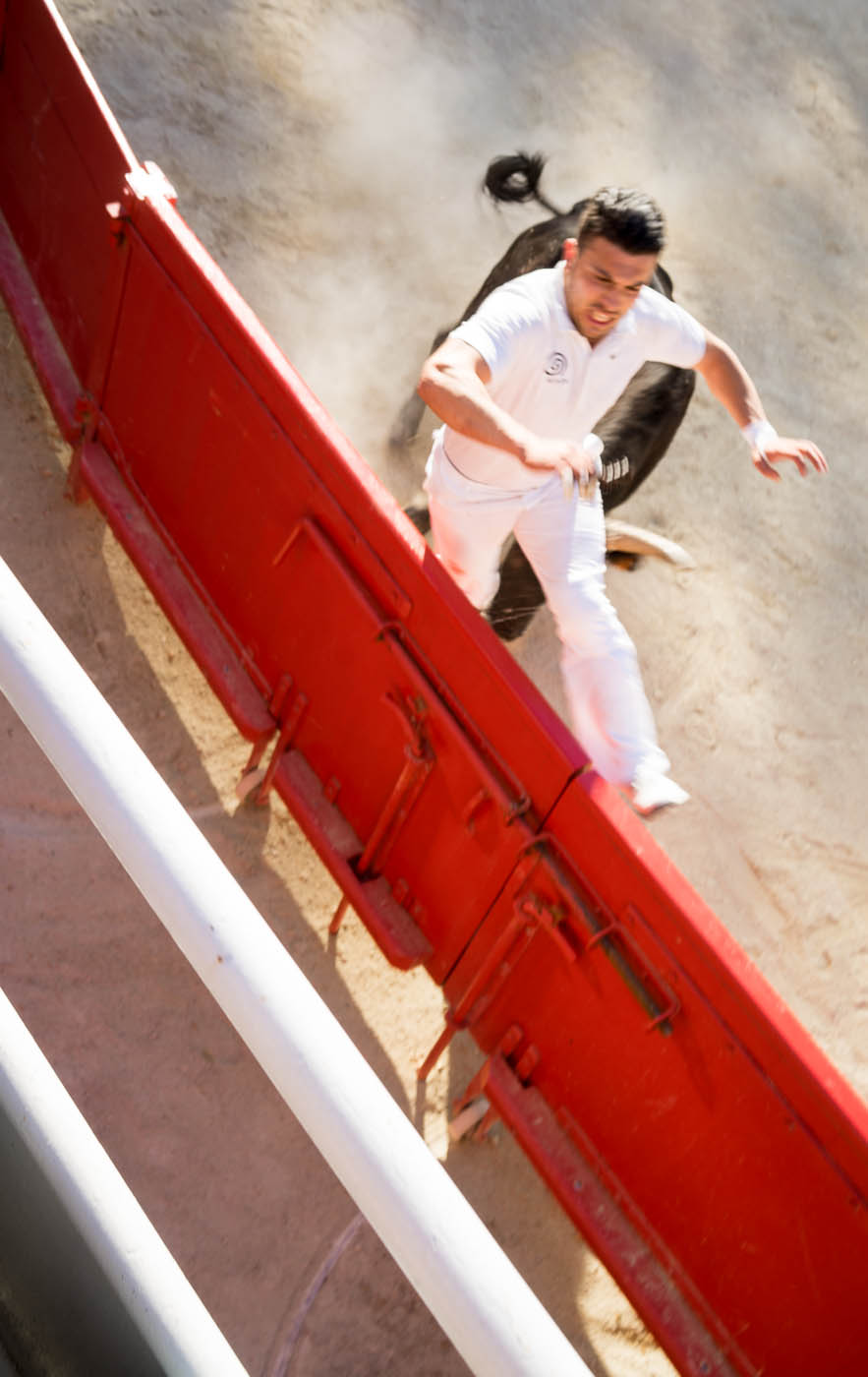 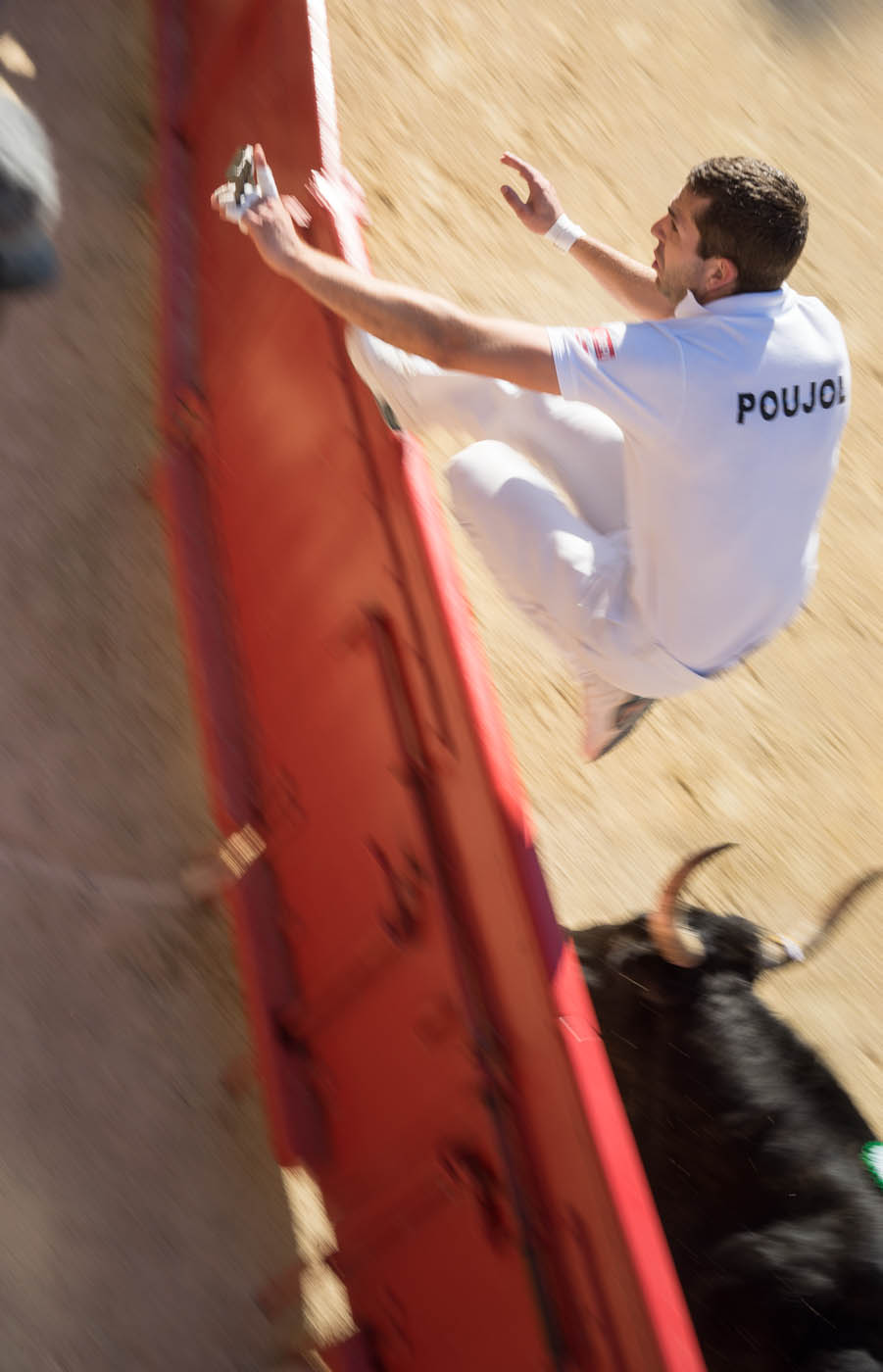 Predictably (and happily 😉 ), it often all goes terribly wrong.

Sometimes, the bull will not be turned to the direction decided by the men in white and a role reversal seems to happen in an instant. 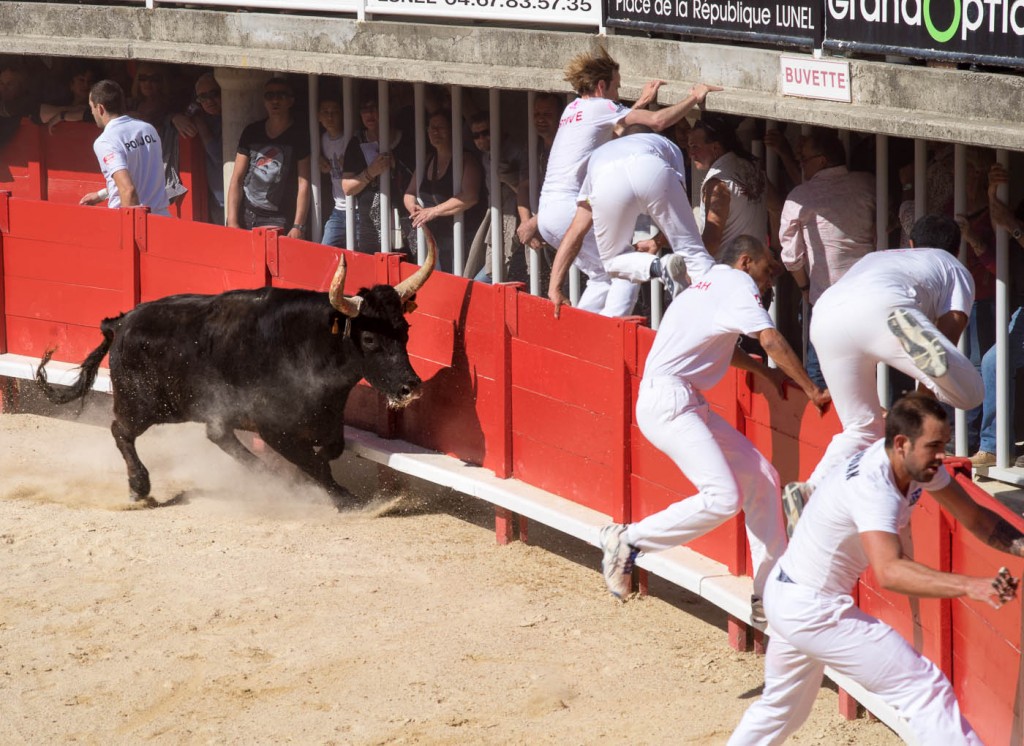 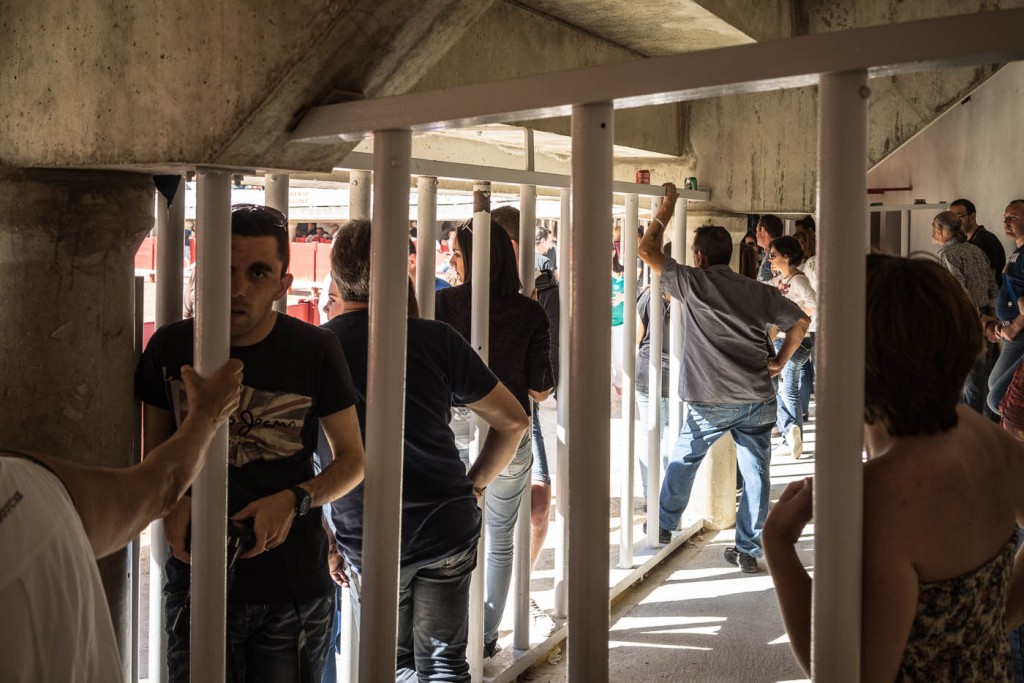 … and why there are bars in place when there is already a big red barricade circling the arena, well … 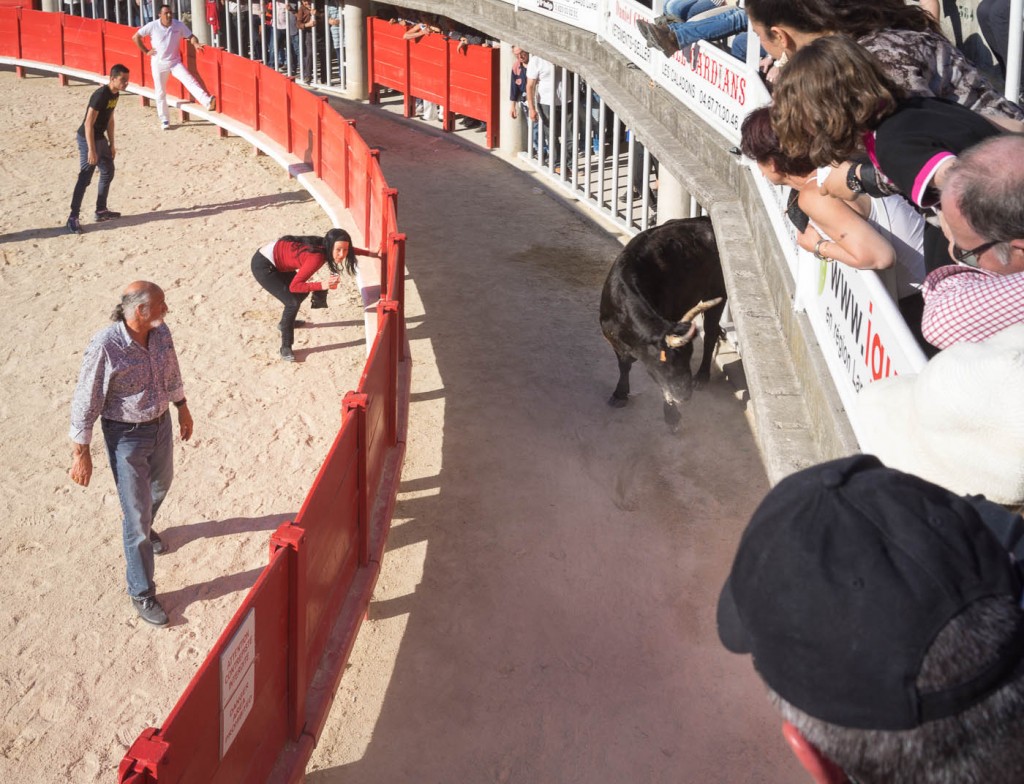 If you’re ever in this neck of the woods (Eastern Camargue and up to the South of Avignon) in mid-spring to summer, do try to attend on of these events (a list of races is on the official website). It’s good for the local economy and the survival of the sport. And it’s tremendous cheap fun. No harm comes to the bull, who is applauded by everyone on its exit and is as much a star as the best raseteurs. Kids love it. And you will not be swamped by fellow tourists like you would in the more famous attractions.

Just grab a 35mm lens for the close shots and a 200mm (or crop severely like me) for the more distant jumps and you’re good to go. A good autofocus is a plus. Otherwise just shoot in manual focus. A game lasts 7 bulls and gives you plenty of opportunity to experiment.