#218. The Landscapes of Ladakh

In 1933 novelist James Hilton described Shangri-La as a mystical harmonious valley enclosed at the western end of the Kunlun Mountains (in northwest Tibet).

The history of West Tibet was lost in the passage of the centuries and is the subject of serious archeological interest in the present age.

Ladakh lies a few hundred kilometres further west, at the western extremity of the Tibetan cultural world. In truth there are many Shangri-Las in Tibet, however Ladakh is perhaps the most spectacular example. It’s also one of easiest to reach for western tourists, just a 55 minute Boeing 737 flight from Delhi over the Great Himalaya Range to the small capital — historic Leh. 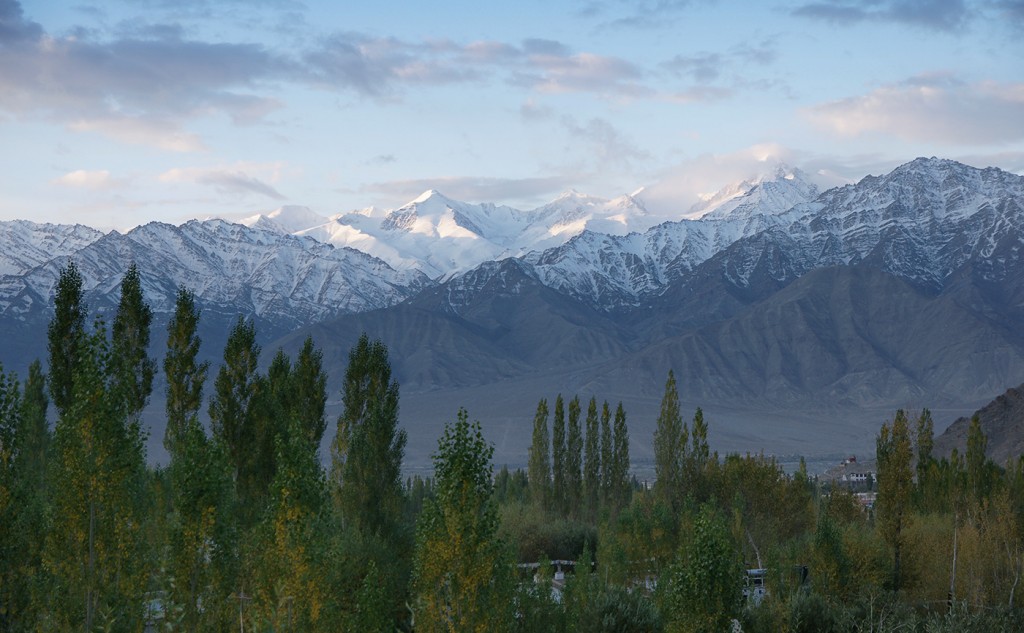 A ten minute taxi ride through the dry thin air takes you from the tiny airport to a budget guest house with this view from a deluxe bedroom: tariff $US20-40 bed and breakfast. Those mountains are as high as Mt McKinley — North America’s highest peak, and higher than any point in Africa or Europe. 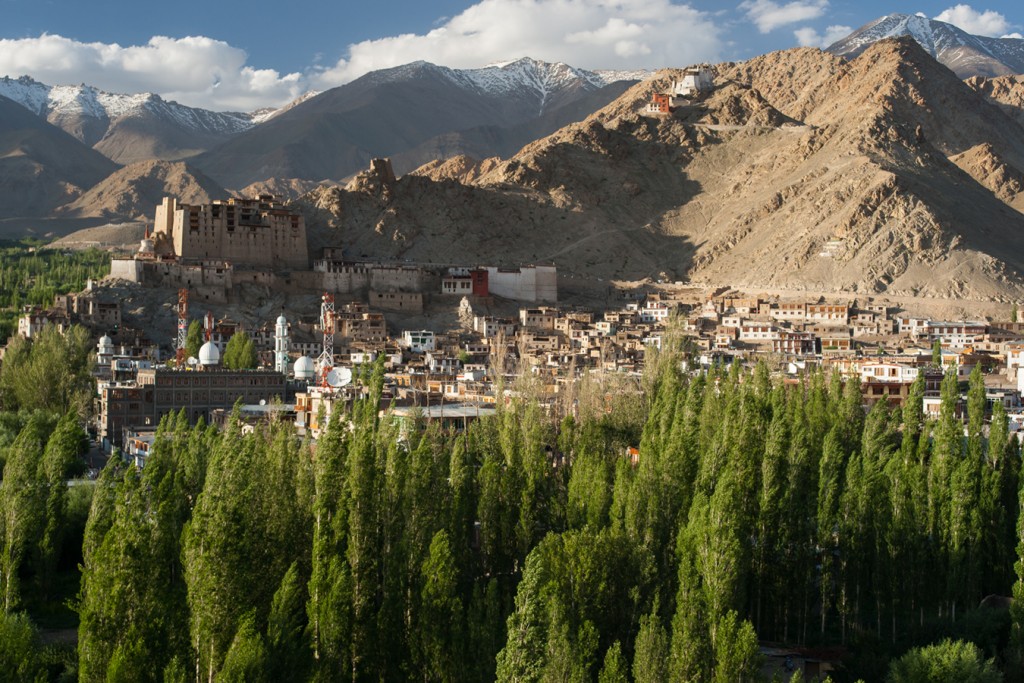 Leh is the only township of any size in Ladakh. It exerts a powerful influence along the central corridor of the Indus from Upshi in the southeast to Lamayuru in the northwest, northwards to Nubra Valley and southwards to Zanskar.

The spine of Ladakh is a 125 kilometre long stretch of the fertile valley which lines the mighty Indus River on its journey from the holy mountain Gang-Rinpoche (Mt Kailash) in nearby Tibet to enter the Indian Ocean in Pakistan. 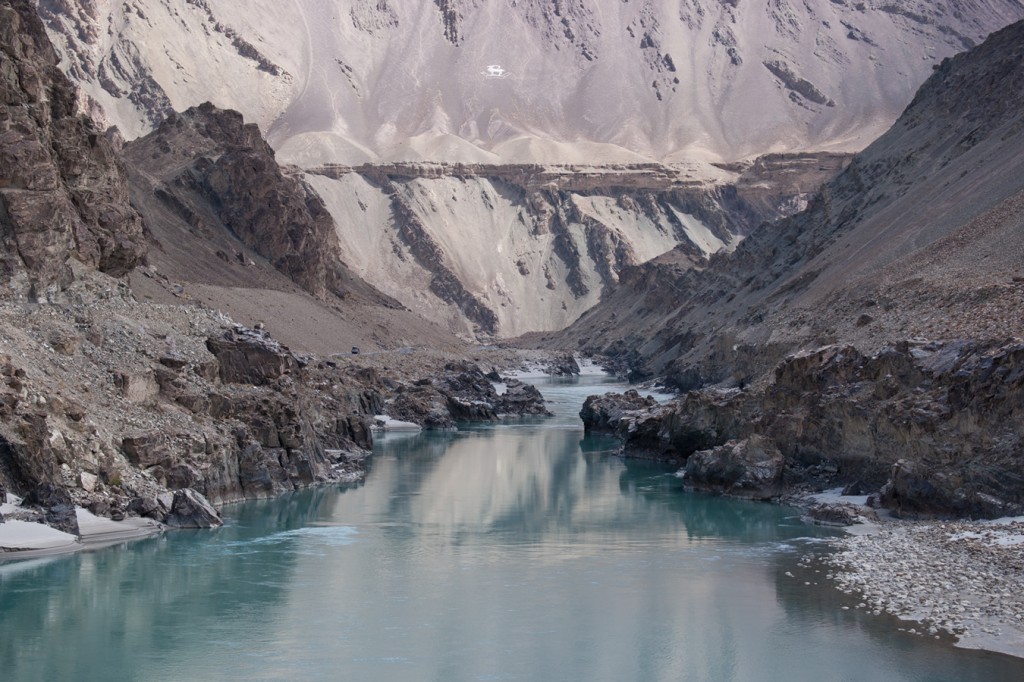 The Indus – the only river to cut through the fearsome Karakoram Range, peaceful here in late season. (c) Philip Partridge

Ladakh (the Land of Passes) offers an extraordinary combination of picturesque high valleys, energetic alpine rivers, giant glaciers and towering mountain ranges in the crumple zone of the Trans Himalaya. Mountains that are often a few hundred metres from the road. It’s all pristine. 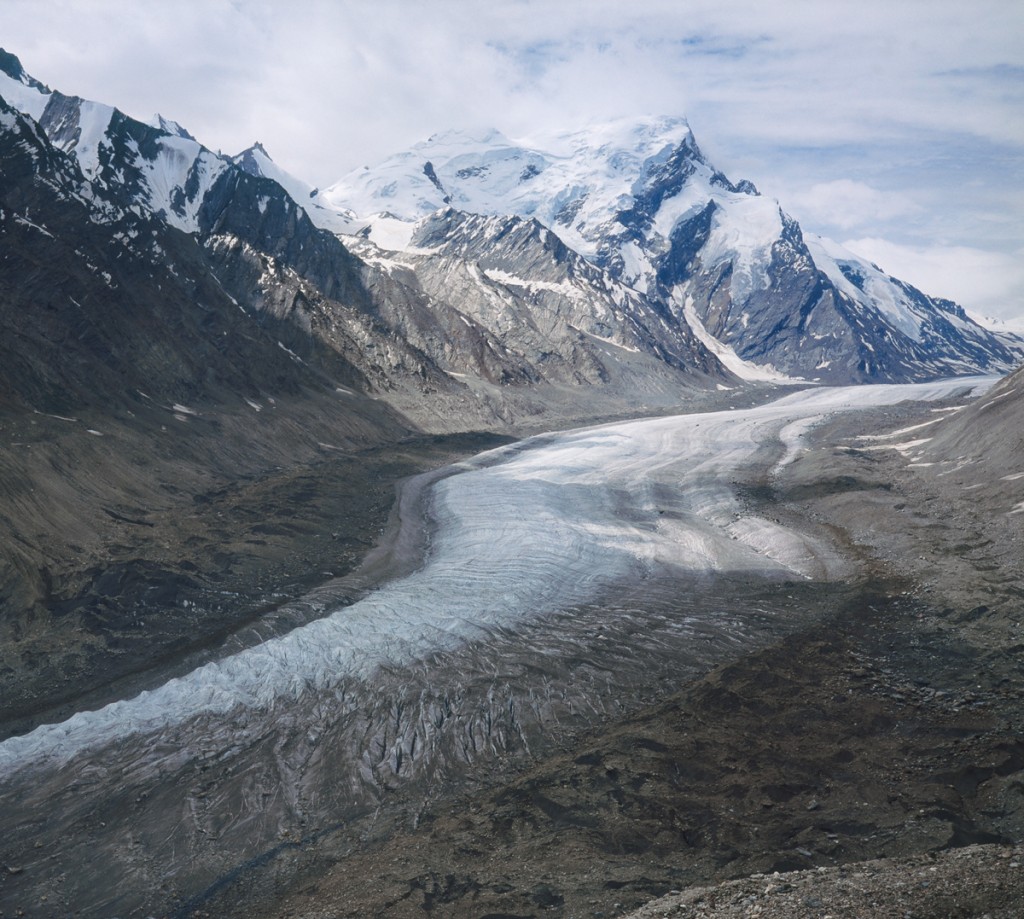 The huge Drung Drang glacier meanders downwards to enter the Zanskar Valley and feed the Stod River. It has ripped off half of the leftmost mountain. (c) Philip Partridge.

The region has been open to western tourism since 1974, and until recently received just 35,000 foreign visitors each season. A large part of the reason is the climate, which divides the year into an abbreviated five month summer (mid May to mid October) enclosed by one of the world’s harshest and longest winters. So harsh that all tourism shuts down and the only way in or out is via air five days a week to Leh’s military airport. 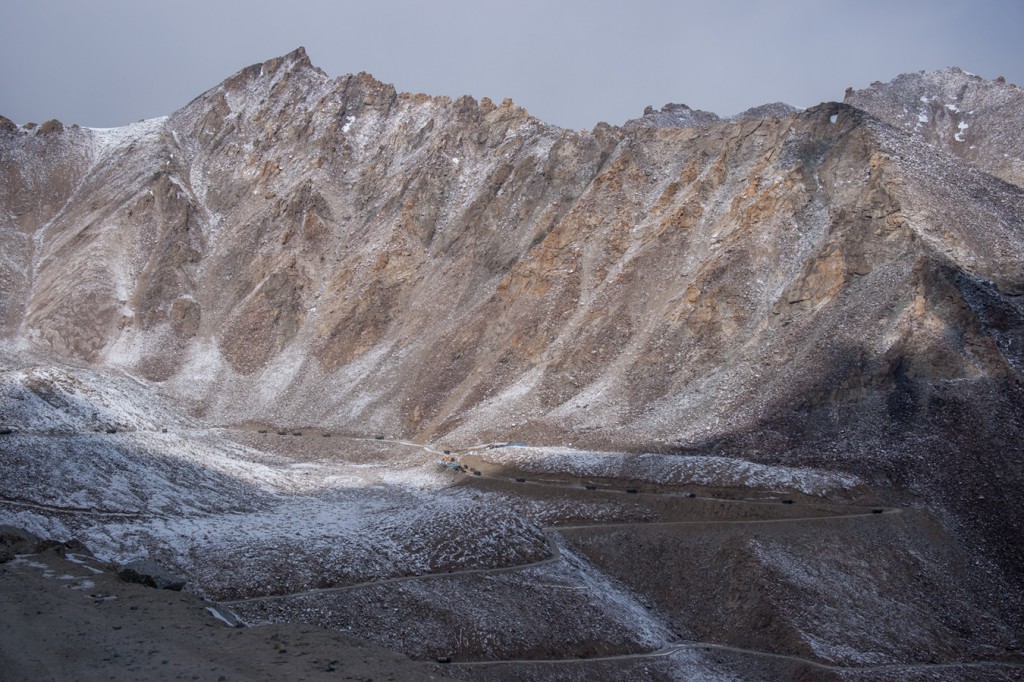 Army truck convoy descending the Khardung La. The pass is kept open in winter for strategic reasons but often gets icy and ‘challenging’. (c) Philip Partridge

In contrast to neighbouring Tibet, the advance of modern transport infrastructure is slow in all parts of Ladakh. The challenge of forging a permanent hard-surfaced road across the southern section of Ladakh is immense given the vertical terrain, but the Border Roads Organisation (BRO) is slowly turning this pipe dream of recent decades into reality. Many highways however remain poorly formed and are subject to closure even in season due to landslides, early or late snowfall and occasionally, civil disturbance and warfare. Drivers refuse trips to Zanskar in October for fear of their vehicle being marooned for the winter once the first large snowfall arrives. 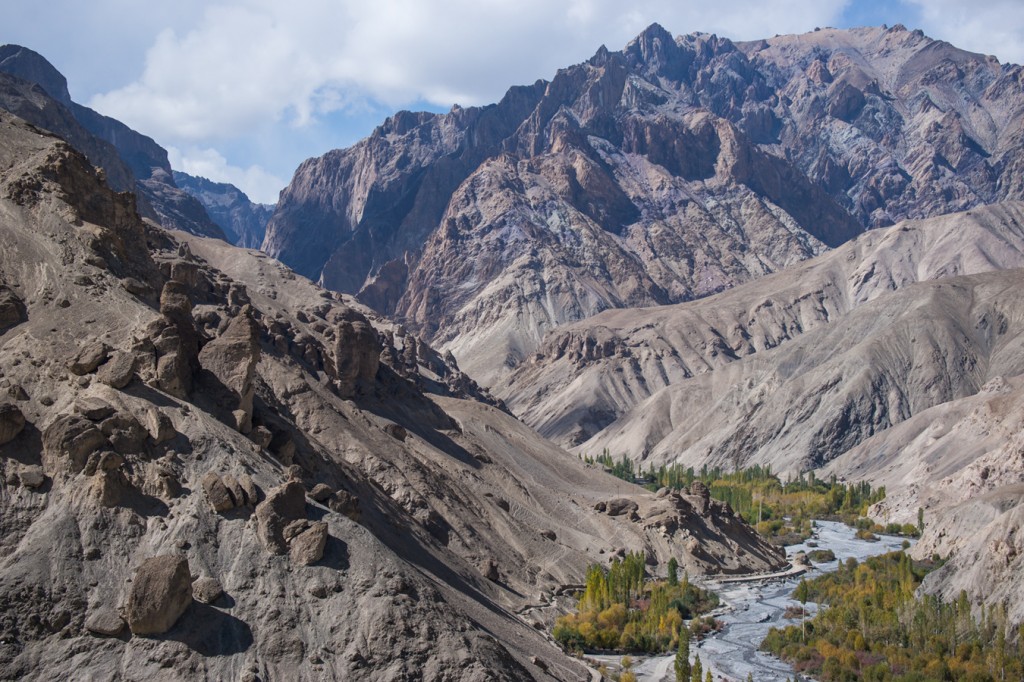 Wanla lies at the northern end of the cross Zanskar road, a true work in progress. One day you will be able to drive through here. (c) Philip Partridge

In and around Leh the valley is a fertile resource for organic produce, tree plantations and barley, the only grain that grows at altitude. Gompas, villages and cropped terraces populate side valleys and dot the washout zone of the relatively broad Indus floodplain. 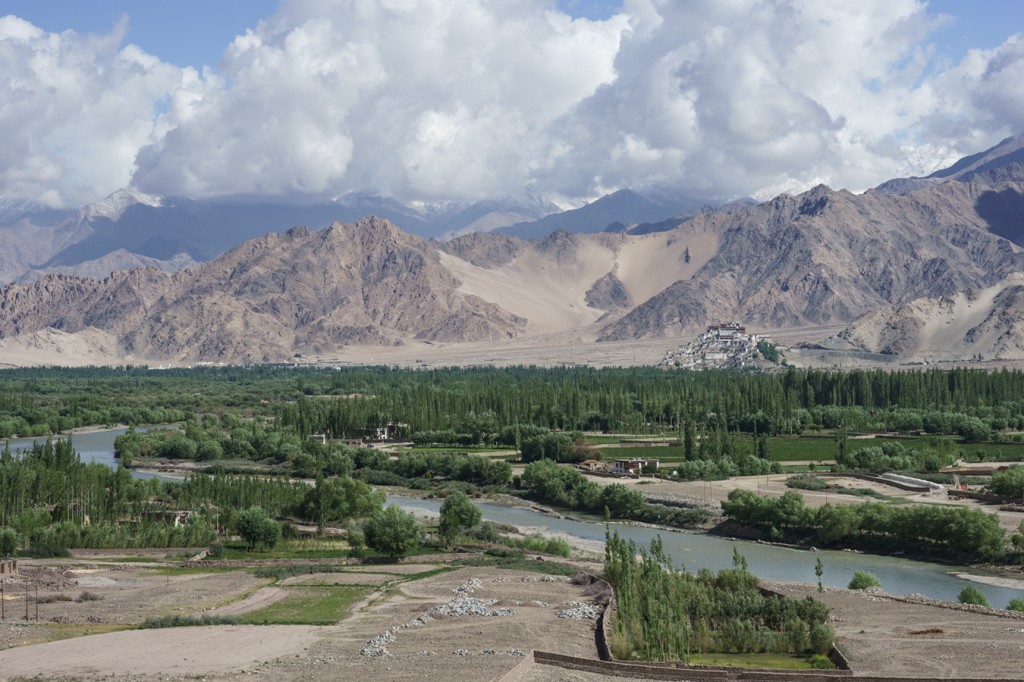 North west view across the Indus valley showing the stark contrast with the arid zone away from the watercourse. (c) Philip Partridge 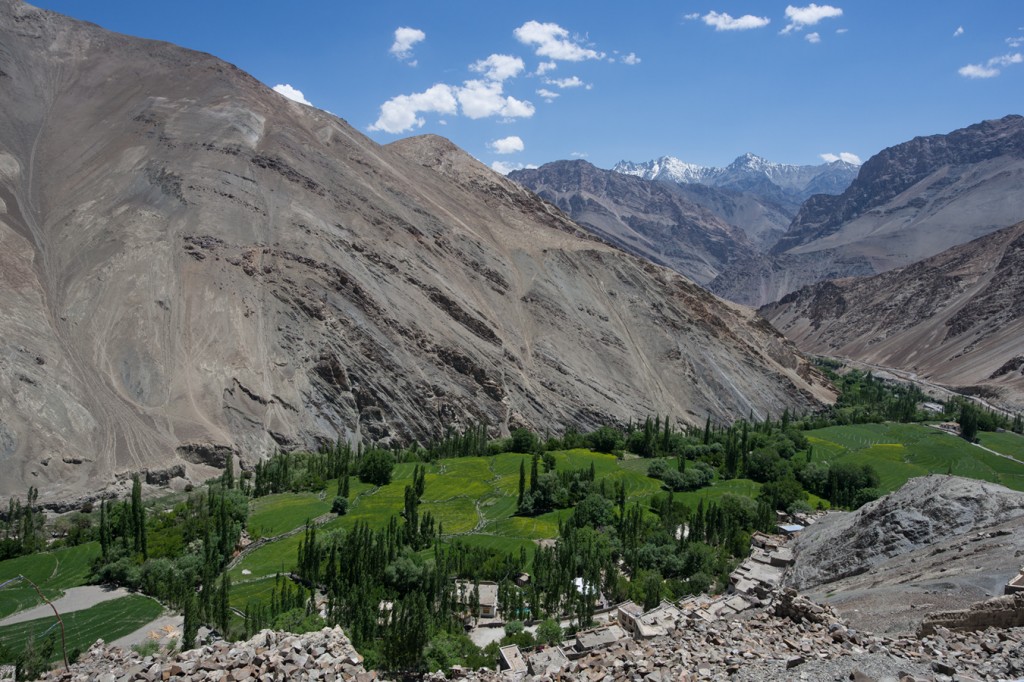 The flat areas of side valleys are cultivated inside stone walled terraces, fed by seasonal snowmelt and simple irrigation channelling. (c) Philip Partridge 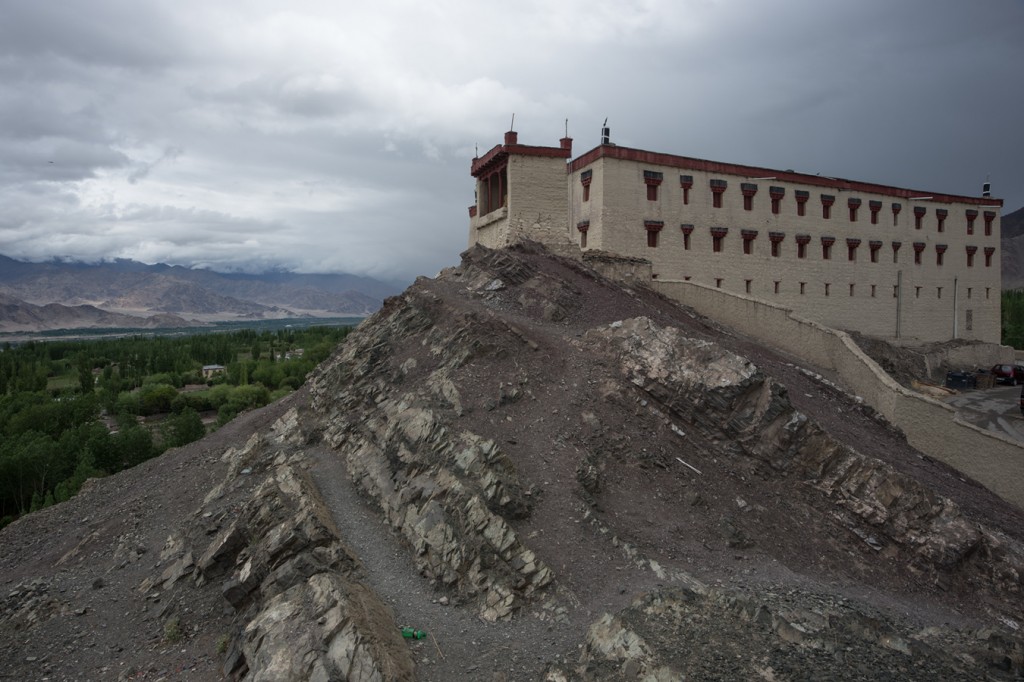 Stok Palace is a good example of traditional secular architecture in Ladakh. It is situated up a drainage valley near the base of the Stok range. (c) Philip Partridge

There are two other major areas of interest to tourists in Ladakh. The most accessible of these is the lovely Nubra Valley, around five hours away to the north of Leh over the 5300m Khardung La (5th image in this article). This region is geographically more like nearby Skardu in Baltistan than Leh, and is home to several historic settlements and ancient gompas at Diskit and Hunder. 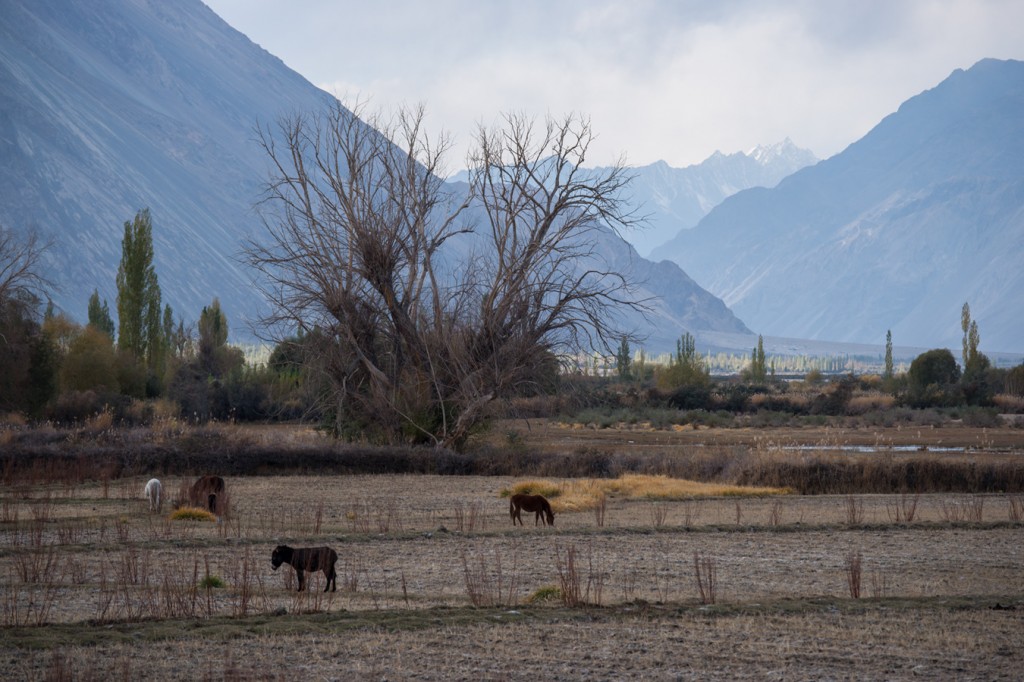 Late season views up valley towards the Karakoram. Nubra is rare in Ladakh in that trees grow here, made possible by the lower altitude of 3100 metres. (c) Philip Partridge 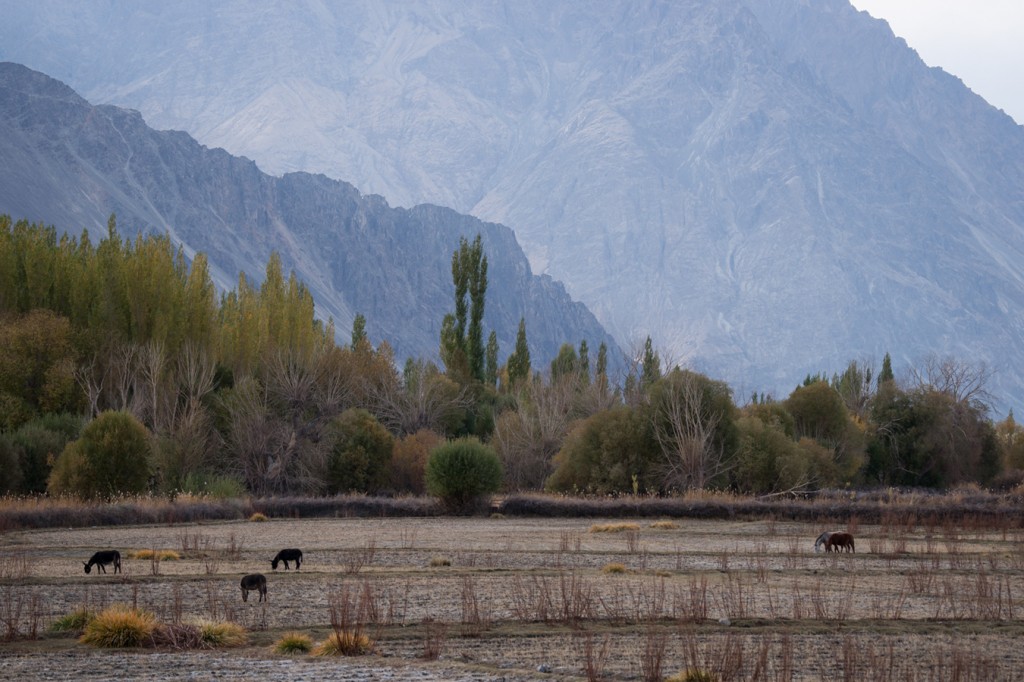 On the three-day long 4wd trip from Leh to Zanskar the rudimentary ‘road’ in the alpine part of the journey climbs close by 7100 metre Nun Kun, passes close by the giant Drung Drang glacier then enters one of the little known and least visited treasures of the Himalayas. The corridor from the upper Suru Valley over the 4400 metre Penzi La pass and into the central valley of Zanskar at Padum is an open promenade of idyllic alpine meadows that lie between the Zanskar Range and the Himalaya Range — large yaks graze contentedly in the sun, Zanskari horses feed in the grasslands in the warm summertime. 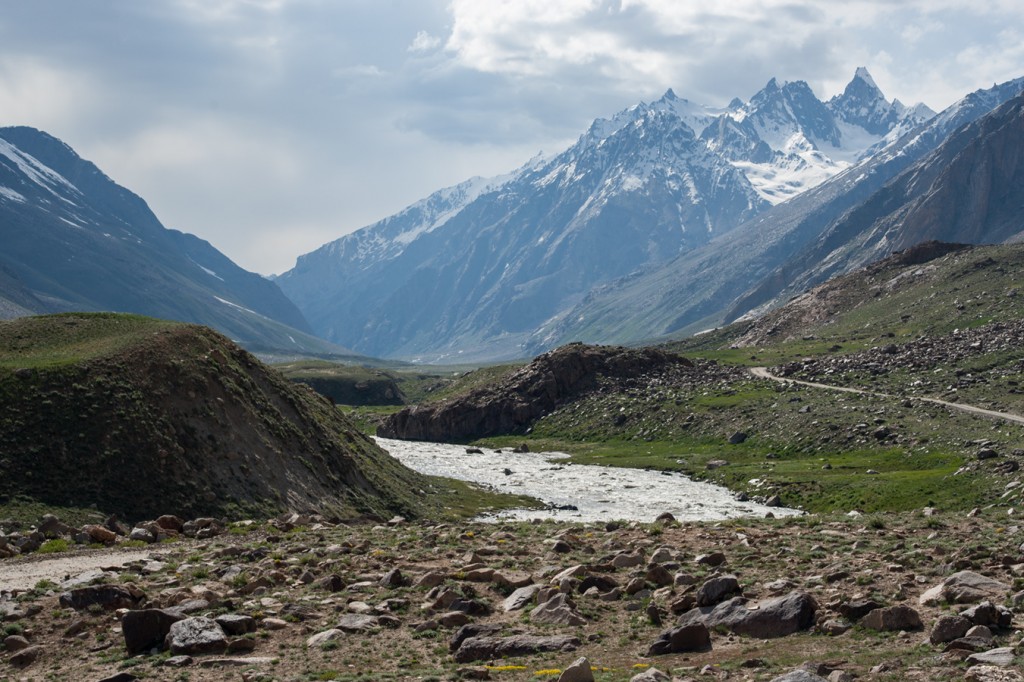 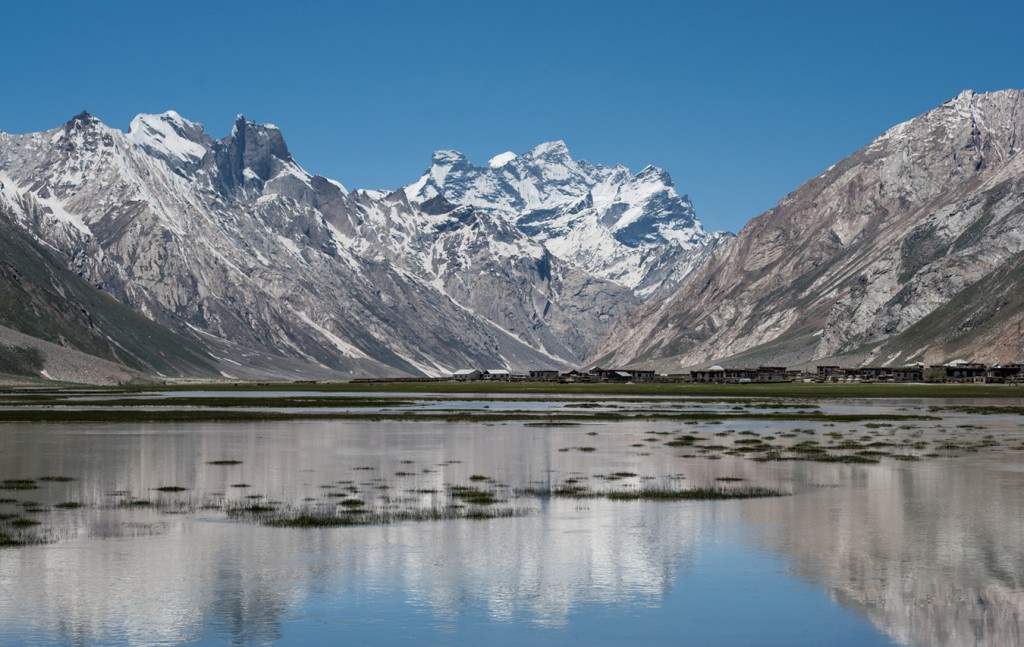 Rangdum village, around 20 dwellings and a Dak Bungalow for the few tourists that pass this way. (c) Philip Partridge 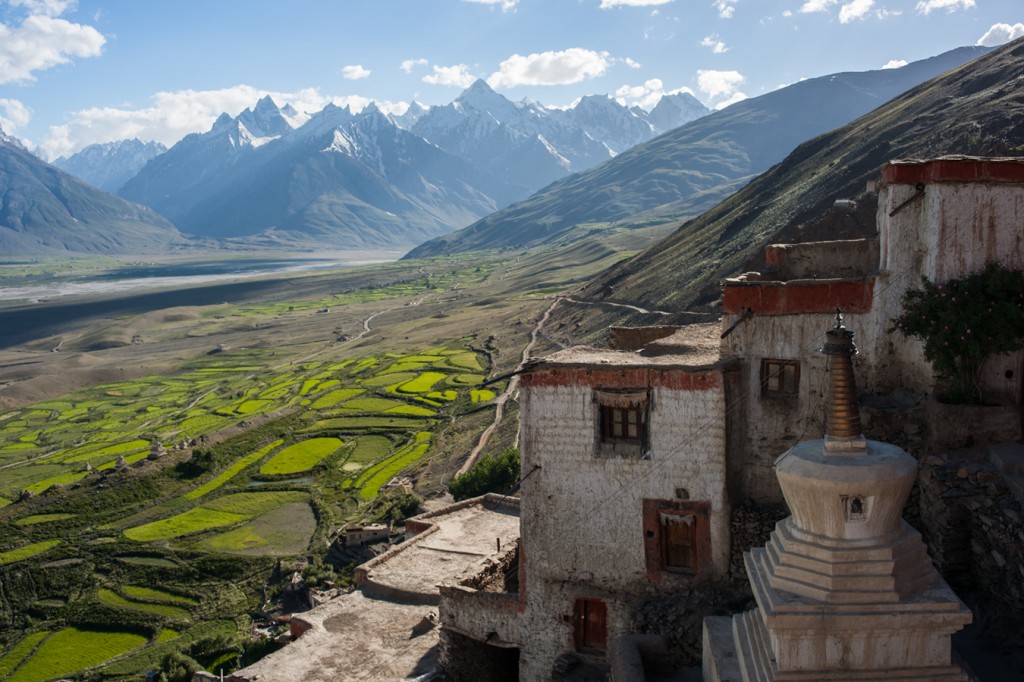 Padum — the capital of Zanskar — in the central valley, viewed from Karsha Gompa. (c) Philip Partridge

Previous Post #217. Should you buy a Pentax 645Z (implied: or a Sony A7R)? Next Post #219. Course Camarguaise: a Photographic Slice of Summer Provence