Ian Hislop, long-time editor of Private Eye magazine and regular TV personality, was interviewed on the radio while I was in London last week. He was promoting a new TV series which sets out to examine our oft-stated preferences for the past and to dispel some of the myths our remembrances construct.

Anyone old enough to have made the mental transition from recent to the past probably finds themself in a similar situation; a hankering for what has passed and a low-level longing to be able to return.

I’m one of those people and used my time in the UK to do some catching-up with my memories. 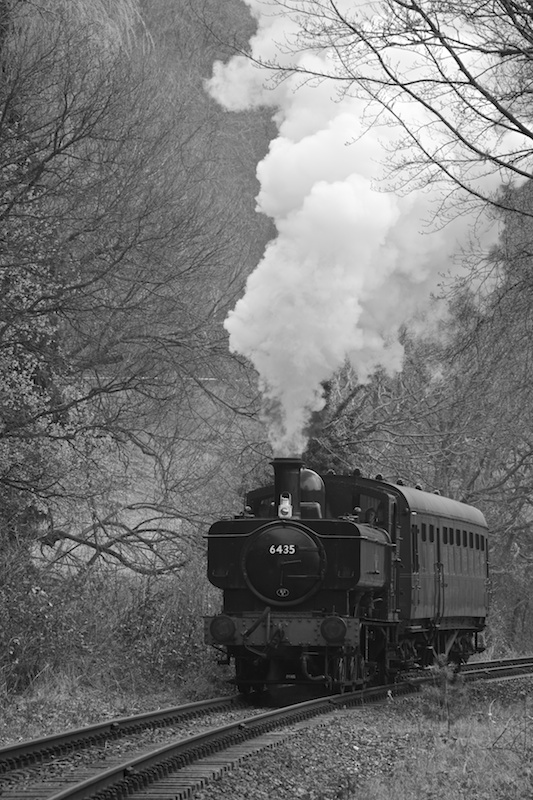 Before leaving Cape Town, I’d agreed with my photo-buddy Steve that we would re-visit the railway Steam Gala we’d attended last year and in addition, had signed-up for a couple of enthusiasts’ charter runs as well.

This year’s Gala was run in much better weather than 2013 and was heaving with visitors as a result; a problem if you want to try and re-create the look of the ‘50s and ‘60s and find modern cars, or oughties-attired people in your viewfinder. It was fun, but a wash photographically. 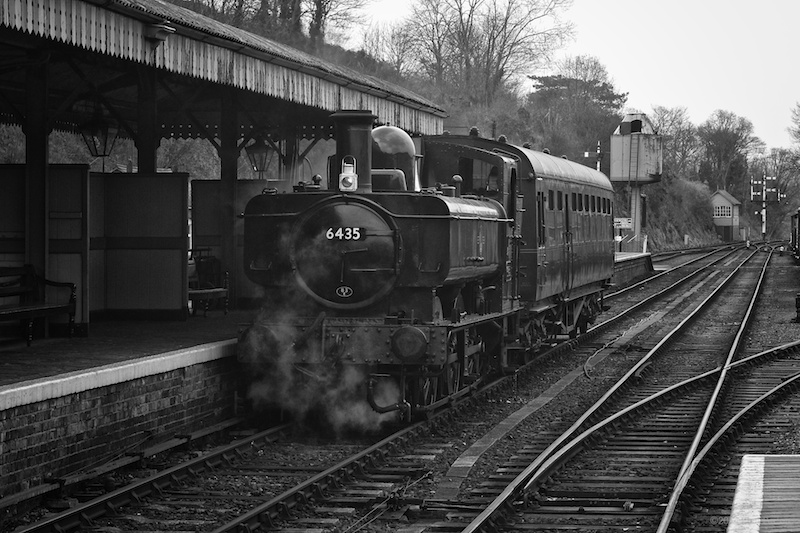 The two charters produced completely different results. Both were organised to run midweek on the lines of preserved railways, meaning no other rail traffic and therefore, little or no restriction on movement of the train we had signed-up to photograph. The only people around were those who who wanted to be there – there were no other visitors.

The first charter was run on the Severn Valley Railway (SVR), with an 80+ year old tank engine and an autocarriage. Typical of the branch line services of the last century, the autocarriage is equipped at one end with the controls necessary to drive the train, but without the necessity of the driver being on the engine. This enabled the engine and carriage to work equally well in either direction and avoided the need for the locomotive to be uncoupled and run around it’s carriage and re-coupled again for the train to run in the reverse direction. 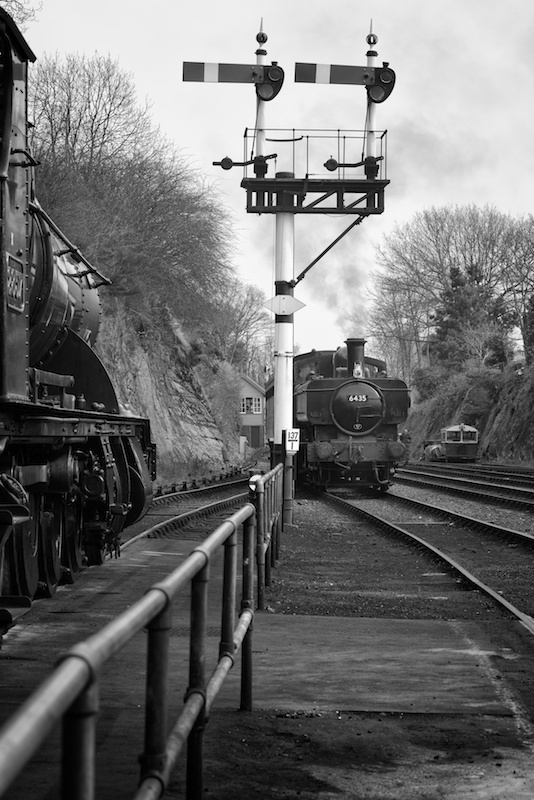 It’s odd sitting in the carriage, watching the driver operate the controls, knowing that the locomotive is at the other end of the train, but it has to be said that the system works perfectly, even the whistle. Those of us looking for the feel of mid-20th century passenger services, got exactly what we wanted.

Our autotrain chugged up and down the SVR’s line, stopping in photographically appealing spots, for us all to climb off and set up, while the train set back (moved back up the line), in order to then run past the gathered photographers, giving them an opportunity to capture as accurate as possible image of the way things were.

The combination of tank engine and it’s carriage worked wonderfully well in both the countryside and several stations along the way. With a break for lunch, it all turned out very well and I headed back to London with several hundred (almost) time-appropriate photographs.

Again, it was midweek and again, no visitors other than ourselves.

And, for me the weather was perfect; overcast and misty, chilly and typical. The other photographers and video guys were less than impressed; anything less than full sun doesn’t give them what they want.

So, the locomotive – carrying the number 7820 and the name of Dinmore Manor, one of several “Manor” class engines that have been preserved – pulled it’s typical three carriage train (and us) up and down the GWR line, stopping at bridges, a viaduct, a tunnel and several stations and at each, set back and made several runs past, giving us almost more than our fill of steam, smoke and memories to capture. 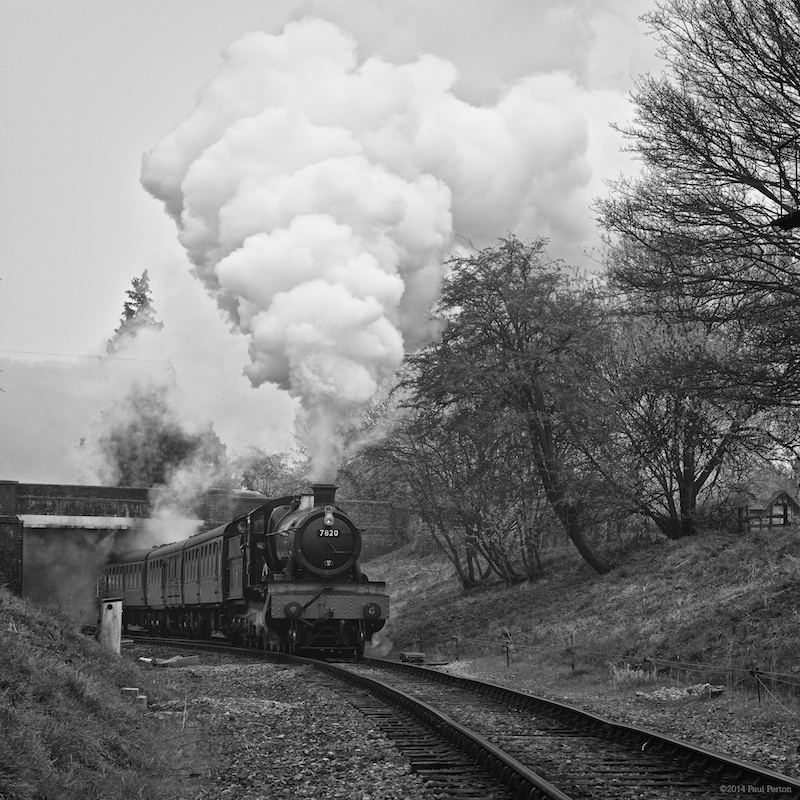 Back in Cape Town, almost every image I shot, I’ve converted to black and white – that was how photographs were back then. And, for me, the results are evocative, moody and a reminder of the way it was. 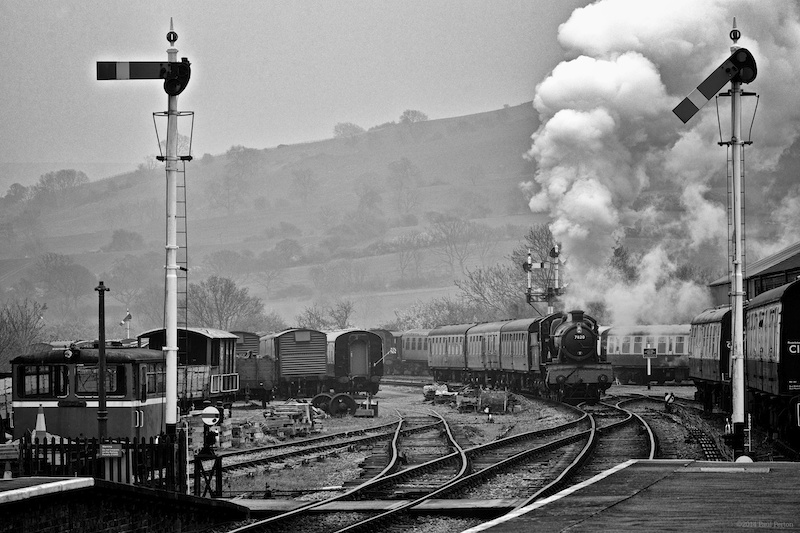 Mainly anyway – as Ian Hislop will doubtless remind us in coming programmes, the reality was that the trains were late, dirty and often not running at all because some union or other was on strike.

That may be so – I still had a couple of great 21st century days out, re-living in the past and don’t mind at all that I often found my memory at odds with reality.