Now that you’ve seen ice on the beach, and ice caves, what is there to see that is worth shooting  in Iceland? Well, considering that it is almost 100% volcanic, lots.

First of all, a small place called Geyzir. That is where the name geyser comes from. So, obviously, there are geysers in Geyzir. Now you could think that getting a decent photo of a spouting geyser is not that easy, because, after all, it is an eruption. Well, after trying, it isn’t that hard, because one gets some kind of warning that the geyser is about to blow. The real problem is that eruptions can be of various sizes, and, while capturing them is possible, changing lenses to fit the right one for size isn’t..:-)

It is also fitting to mention geysers after spent time with ice, because the water that they spout is  really hot, close to 100°C actually. This is how Iceland gets almost all of its energy: hot water from its innards, turned into electricity. Beautifully pollution free. Free all the way, actually…

The other issue is that, while they are spectacular, geyser eruptions all tend to look the same. See one, and you’ve seen them all. So photographers have to work just a bit harder to come up with less-than-totally-boring shots. Otherwise… 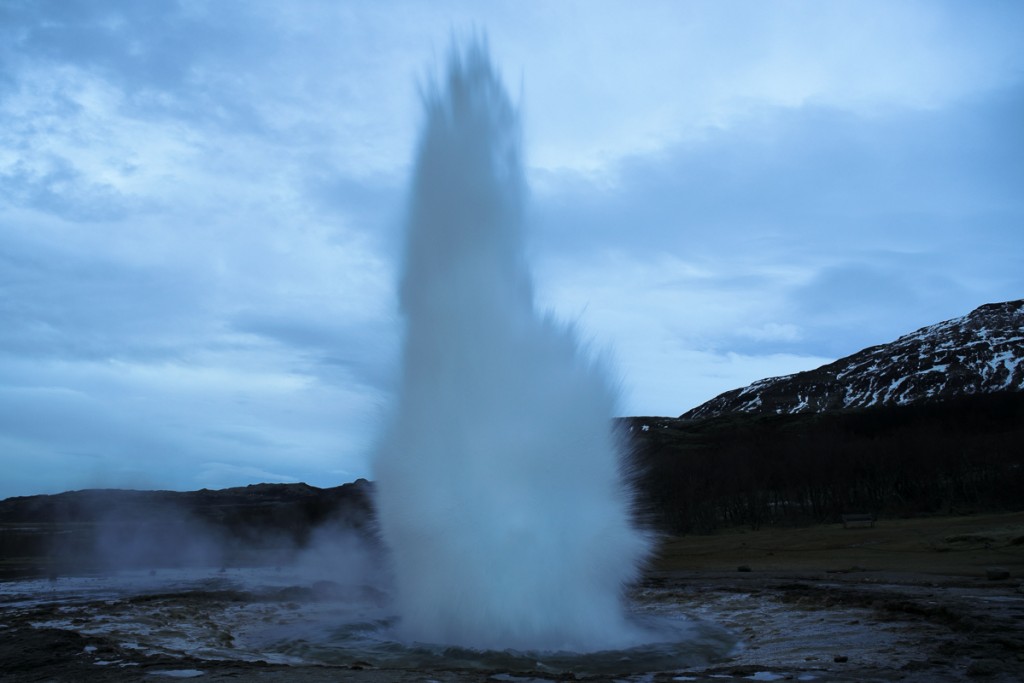 So, let’s try something different. Like the golden hour, with extra fun, trying to catch the very moment when the geyser is breaking… 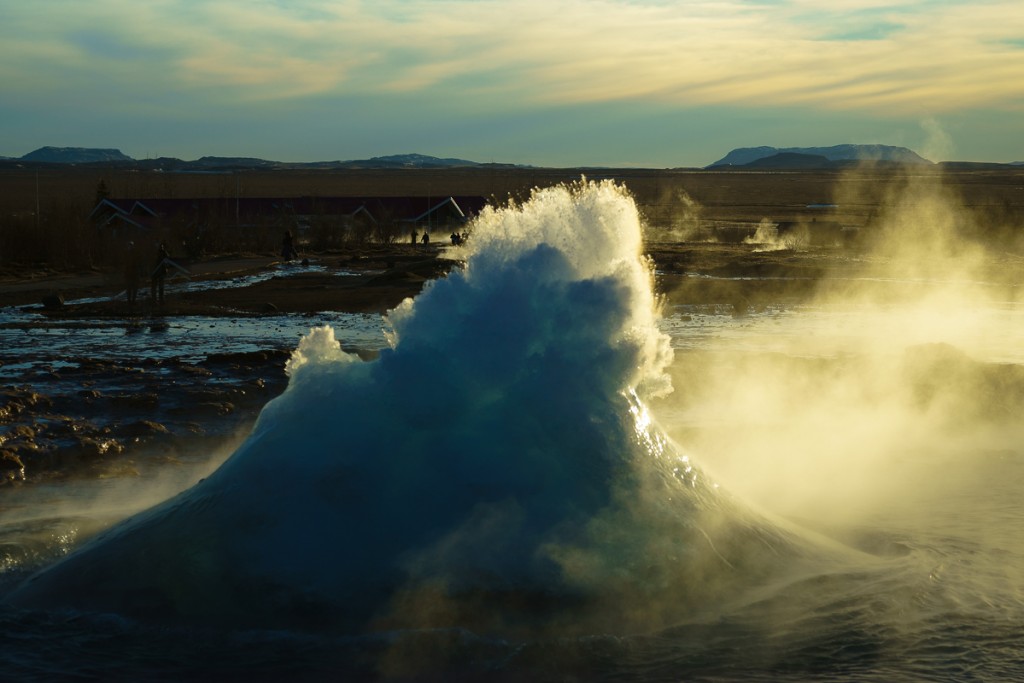 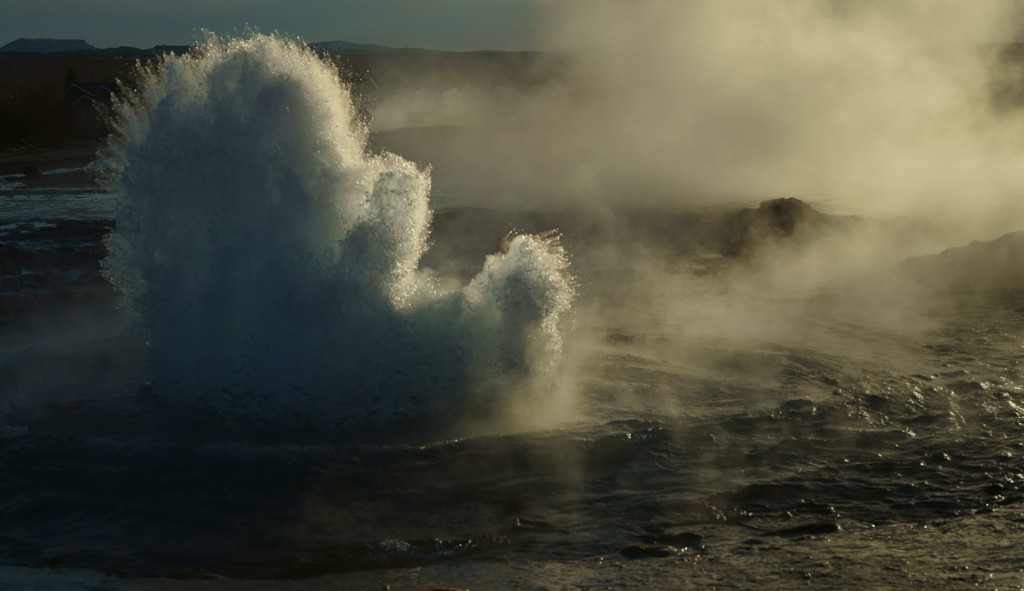 But; with geysers, still, there is only so much variety. So, what else is there to see in Iceland? Well, waterfalls of course. Just the thing for my friend Boris. Except that he had hoped to find them frozen over, but, with the mild winter, they were flowing freely. 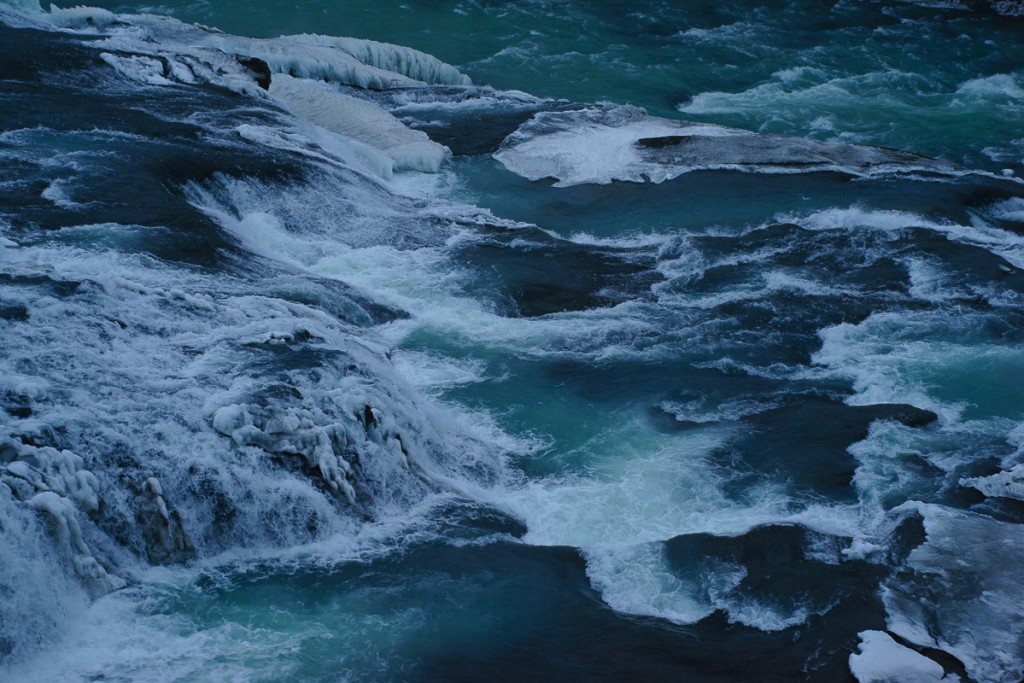 Whereas when we went to the famous Gullfoss, a huge cataract, not only was it not frozen, but the wind was astonishingly strong. Gusts at 130km/h. Try taking long exposure shots in such weather. Well, Boris did, being Boris the Dedicated. And almost all his shots (dozens and dozens) were blurred. I did manage a few, looking almost like abstacts. Actually the best point of view is down a trail but it was closed due to the weather. That was not enough to faze Boris, who went there at night, in lesser wind, and came back with great shots… 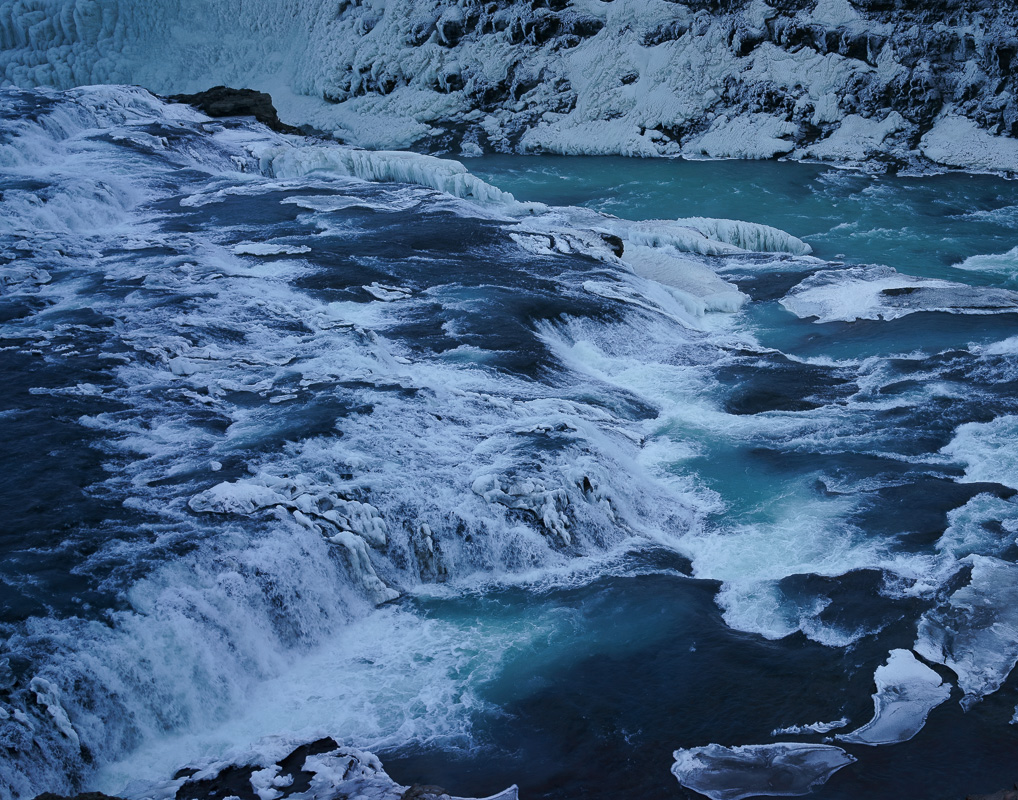 Let’s also not forget that Iceland is an island. So there are many opportunities on the seaside, even when there is no ice floating around. Such as this: 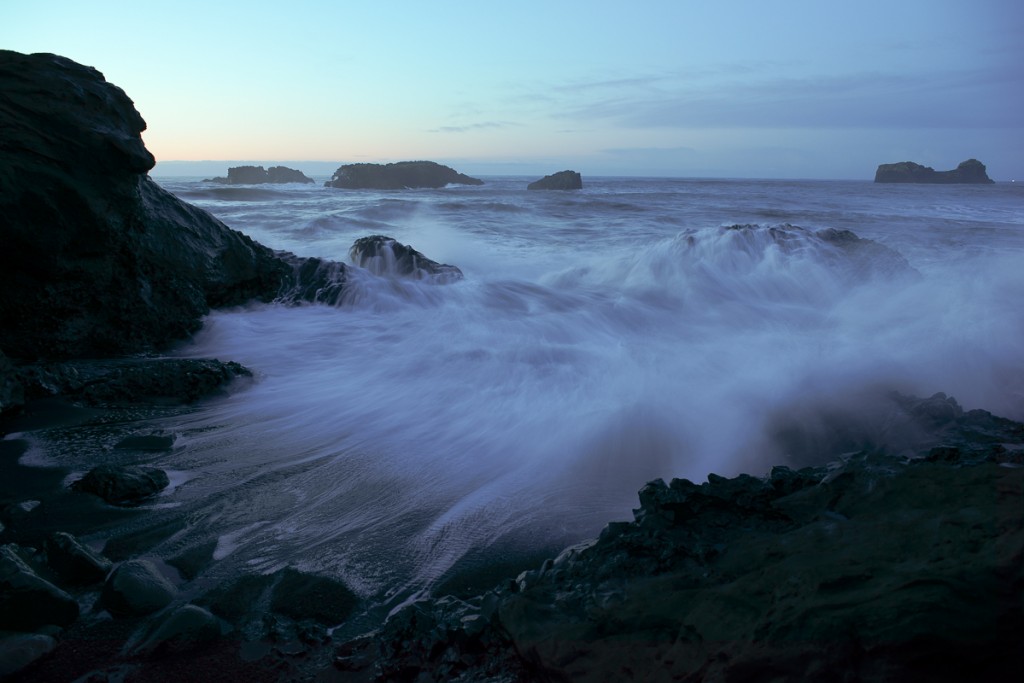 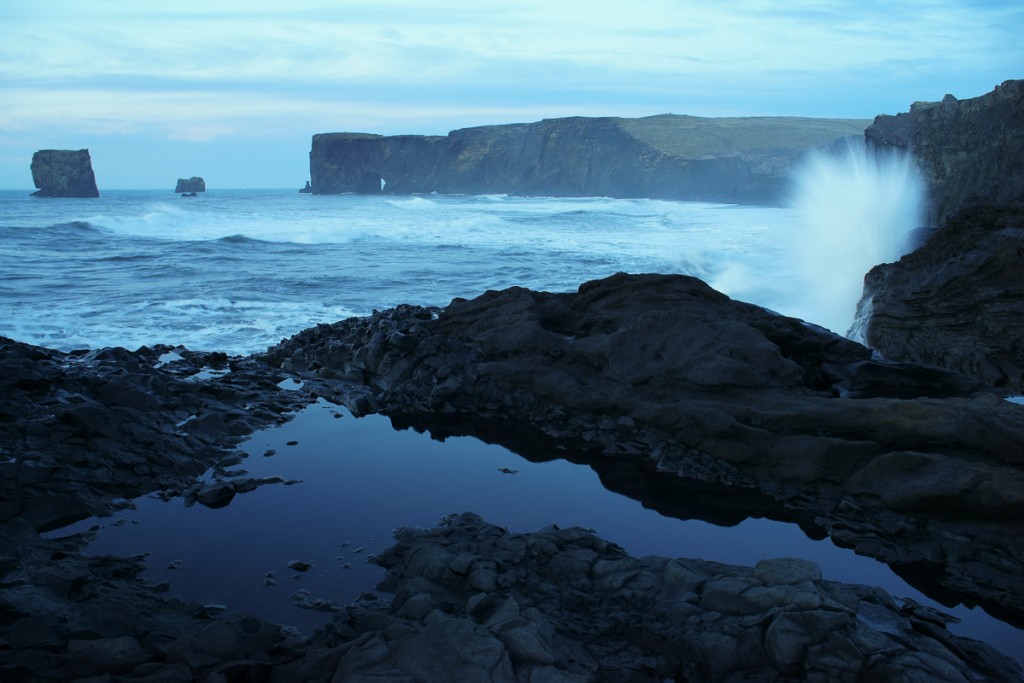 Iceland, however, is not all seaside, and visiting it involves some serious driving. Because of the terrain and the weather, 4-wheel drives are the norm, and you will come across many so-called super-jeeps, because fording rivers is required to get to a number of the more spectacular sites, especially when you go anywhere but the circle around Rejkjavik and the southern seaside road. Such driving is not, however, without offering photographic opportunities

Boris, on the other hand, is into another type of photography: underwater. He kitted himself with an underwater housing for his Nikon D800E, and went diving into lake Silfra, one of the clearest sweetwater expanses in the world. I cannot resist including one of his shots, to show you how extraordinary the result is.

I would not like to finish without some gear-talk. For the first time, I gave my Sony A7R a major shakedown. I must say, I find it a most satisfying camera. There have been many criticisms around alleged flaws: shutter-induced shake, light leaks, etc… I, for one, do not use it with a tripod- collar-mounted 500mm+ lens, so I don’t get shake. Interestingly, after damning for this “major flaw”, the blogger who arrogantly petitioned Sony to fix it, tested the Leica M and found it to shake as well. And after again lamabsting it fo its light leak, visible at 25.600ISO on a 30s. exposure (again, not my typical picture), more tests showed that other cameras leaked too. Flaws? Yes. Meaningful? Hardly IMHO.

With its ZA 35 f:2.8 FE, I find it a fantastic street, cityscape and landscape machine. It takes alt lenses beautifully, except most but not all wide angles. Would you have guessed that some shots on this trip were taken with a 200€, 40-year old lens (Olympus Zuiko 28mm f:2.0)?

At any rate, I would not like to close without a homage to what is, in my mind, the most wonderful example of something I normally hate: contemporary churches. The Rejkjavik cathedral is a fantastic building, both for worship and, also, as a architectural landmark. In all, a great trip, in a highly recommended country, where there is so much more to see and do than what I have shown. Like the place where you can stand with one foot in Europe and one in America, also the site of the world’s first parliament. None of this, of course, would have happened without Boris, whom I take this opportunity to thank one more time! 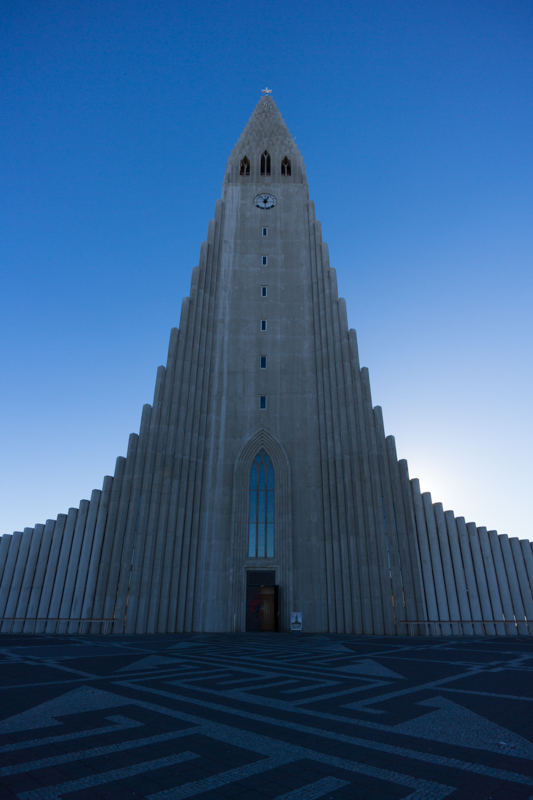