Iceland, a name that spells great cold, that rings almost like the edge of the world. At any rate, a highly exotic place, very far away. Well, so much for stereotypes and clichés. Fact is, Iceland is no further away from Western Europe than Russia, Turkey, or Morocco. Actually, Iceland is easy to get to and its airline, Icelandair, runs a clever scheme with which you can stop for up to 7 days in Iceland on the way to the US, at no extra cost. Smart… 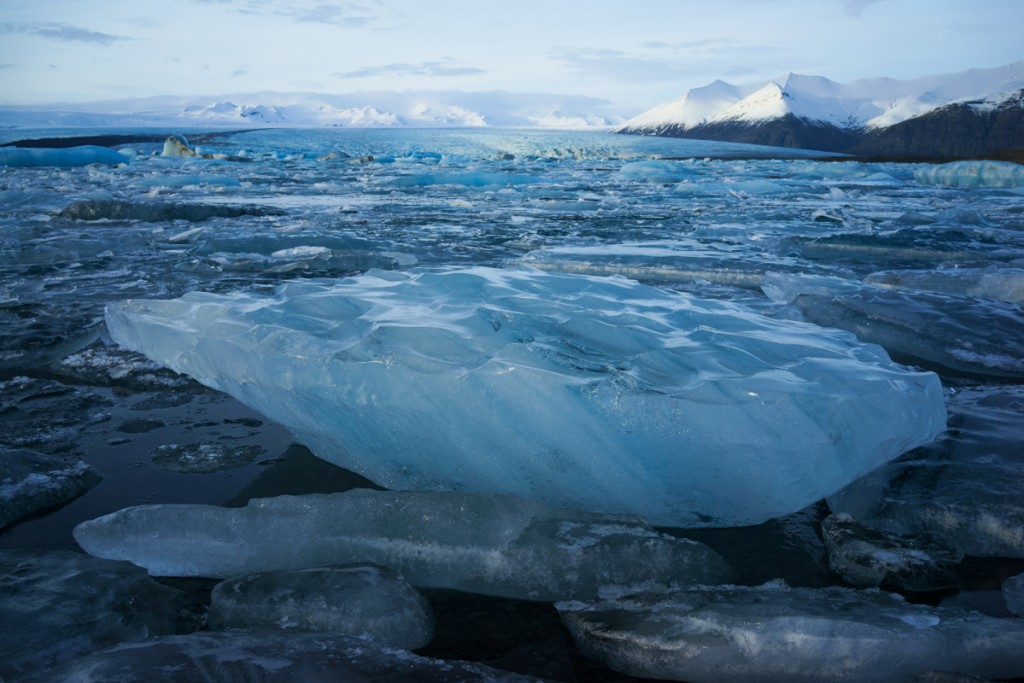 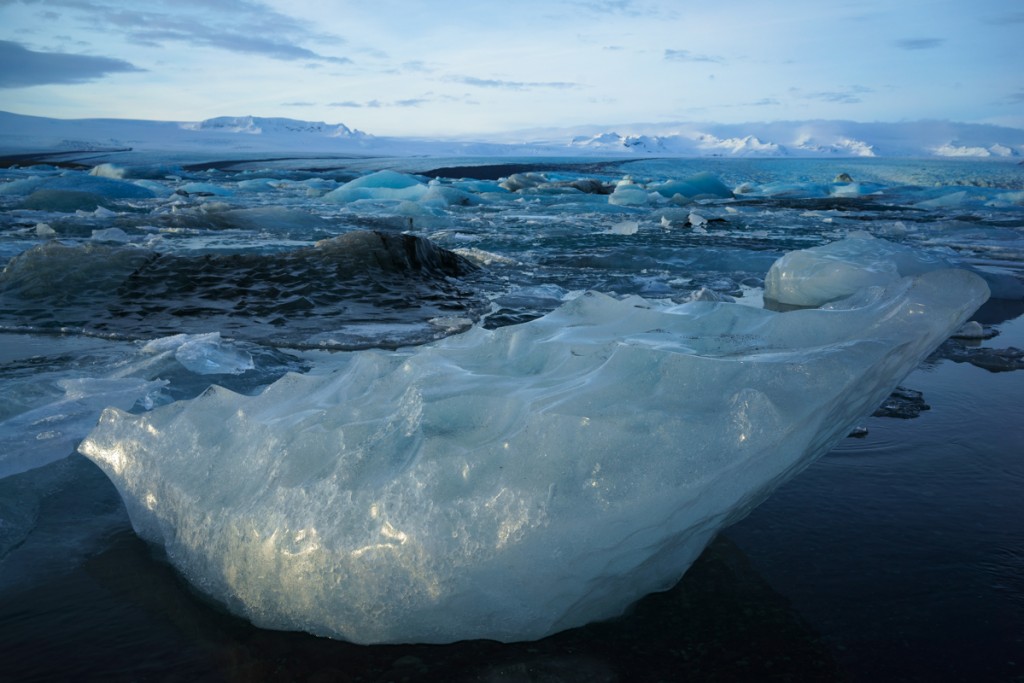 So, why is Iceland so far-flung? When you look at facts, our trip to Iceland did not cross the Arctic Circle, unlike when we went to the Loftoten last year, in much more familiar and closer-looking Norway. My using the word ” we” rather than “I” means that you are about to read another instalment of “the great Boris and his padawan”.

So for those of you who grace DearSusan with regular reading, you already know the lay of the land: my friend Boris, the German engineer, perfect planner, clarity ayatollah and cascade fetishist. And I, whom he takes with him to share the costs and amuse him with corny jokes while I refine my craft with his teachings. For those of you who want to know more about him, you can visit his site at http://wild-places.com/

Iceland, as many of you know, is one of the world’s great spots for landscape photography. So much so that you shouldn’t expect to be alone, or even, unencumbered. In February, normally an “off-season” time, there were photographers aplenty. The private ice cave tours were fully booked, and even the group ones were too crowded for my taste. The first evening, as I had painstakingly aimed my camera at a great waterfall, a busload of Asian tourists shows up, who proceed to go right behind the cascade, each kitted out with a headlamp. Not great for a landscape shot requiring some 15s of exposure. So booking early and planning makes real sense, unlike in Patagonia, where Boris and I went on for many hours without meeting a soul. 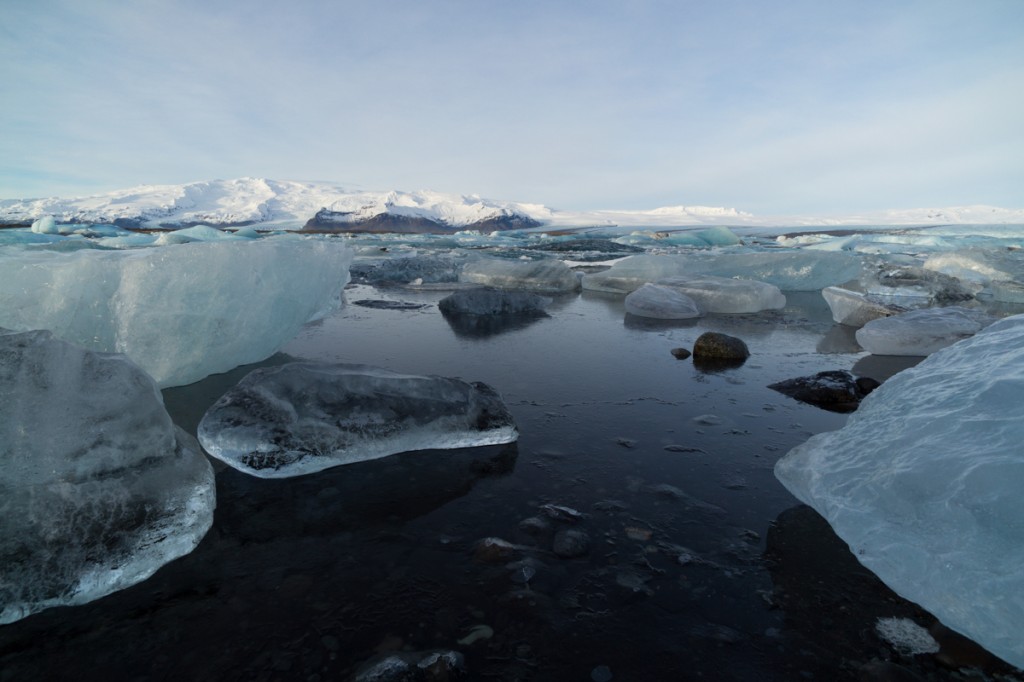 Now, to business: what is there to see (and shoot) in Iceland? Well, the first answer must be: ice! Yes, there are some great waterfalls, but so are there in other parts of the world. Yes, there are volcanoes, but that again can be found elsewhere. Yes, there are geysers (the word actually comes from the place called Geyzir, in Iceland), but Old Faithful spouts in Yellowstone, so there is no Icelandic monopoly there either. What Iceland offers the visitor is some very unusual ice caves, as well as ice-on-the beach. Most prominently in Jökulsarlon, some 5-6 hours’drive East of Rejkjavik. 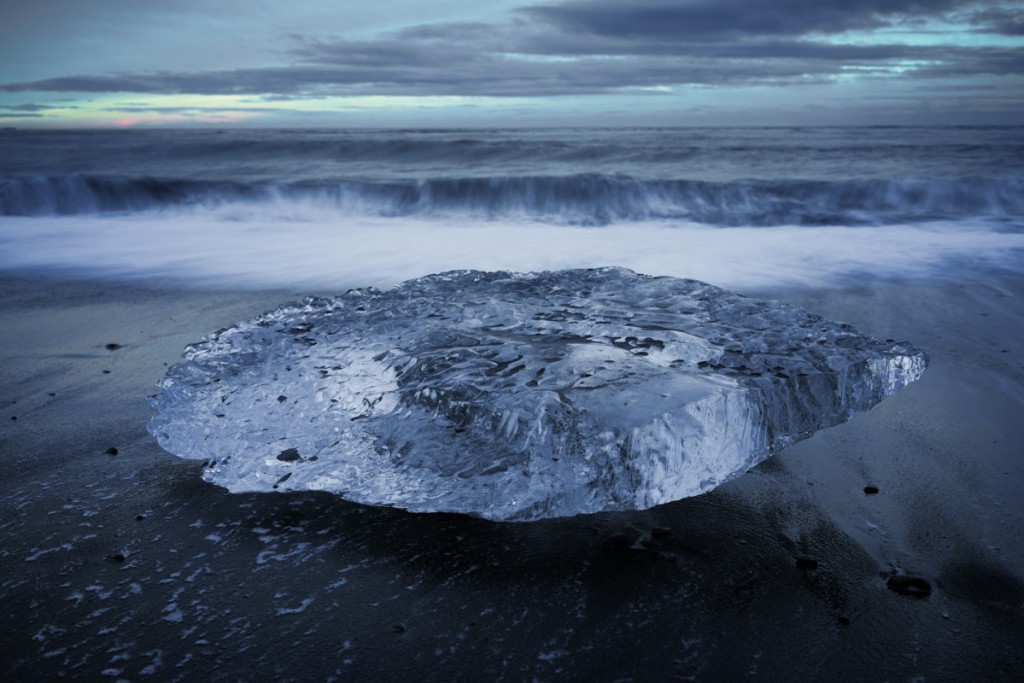 Ice-on the-beach depends, to some extent, on the weather. Bits of ice of varying size break off the bottom of the Jökulsarlon glacier and are swept towards the Ocean by the river. Then if the wind blows from the sea, it sweeps them back onto the beach, to lie there like improbable crystals. The especially nice aspect of this ice show is that one doesn’t actually need to be a great photographer, or to have great equipment, to make this work. Providing you don’t do anything crazy, anyone can come up with nice shots, except for one aspect: white balance. Ice, sky and water tend to confuse modern cameras, as does snow, and a bit of PP was required to set them straight again. Apart from this, even camera phones can take spectacular shots, and make their proud owners to feel like latter day disciples of Ansel Adams. 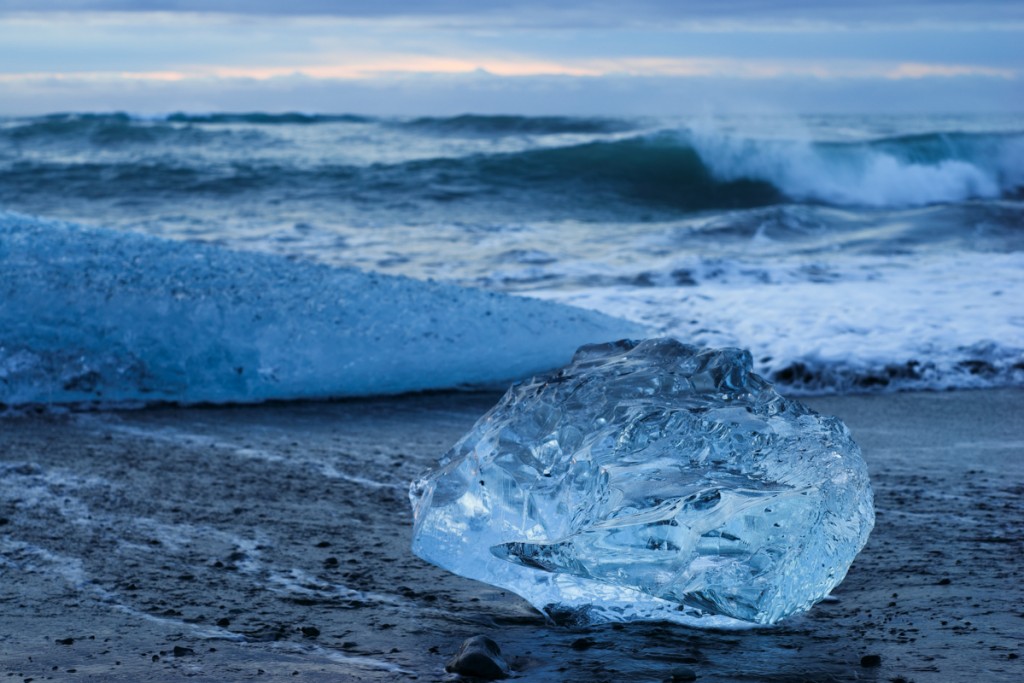 But, this warning notwithstanding, as is the fact that Icelandic weather is not always kind to photographers, we can just sit back and enjoy the show that the dancing ice slabs put up for us. Beginning with those that gracefully float away 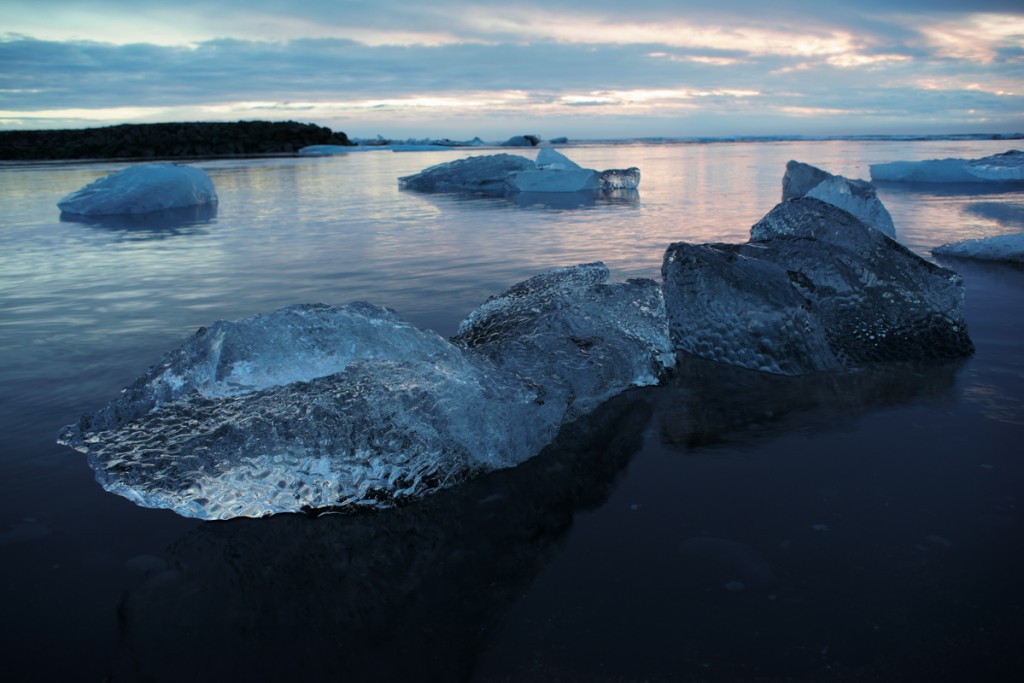 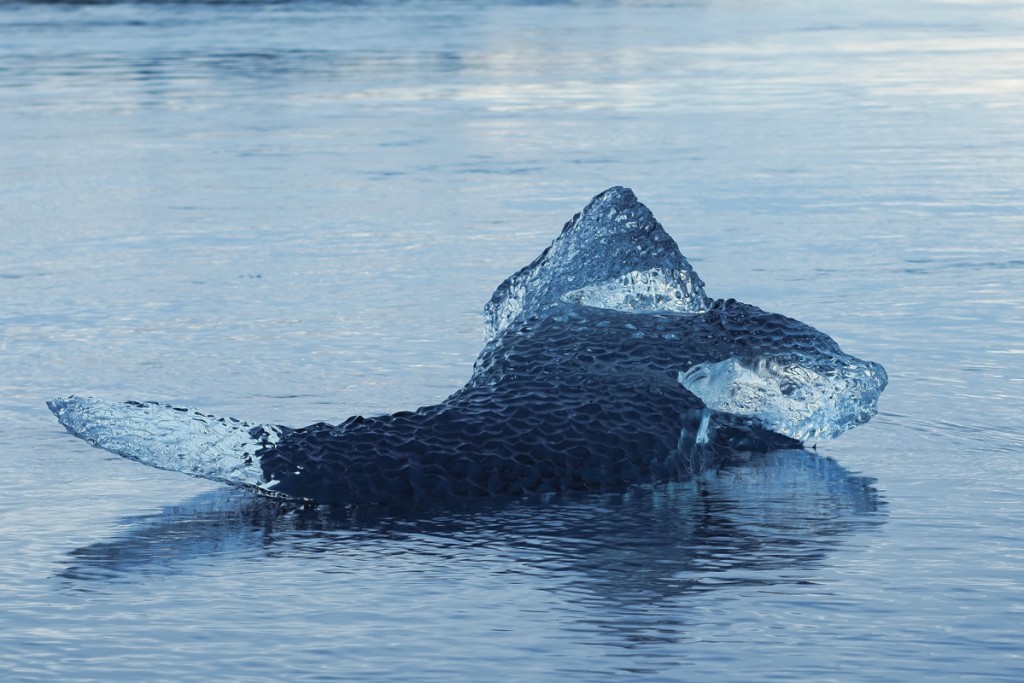 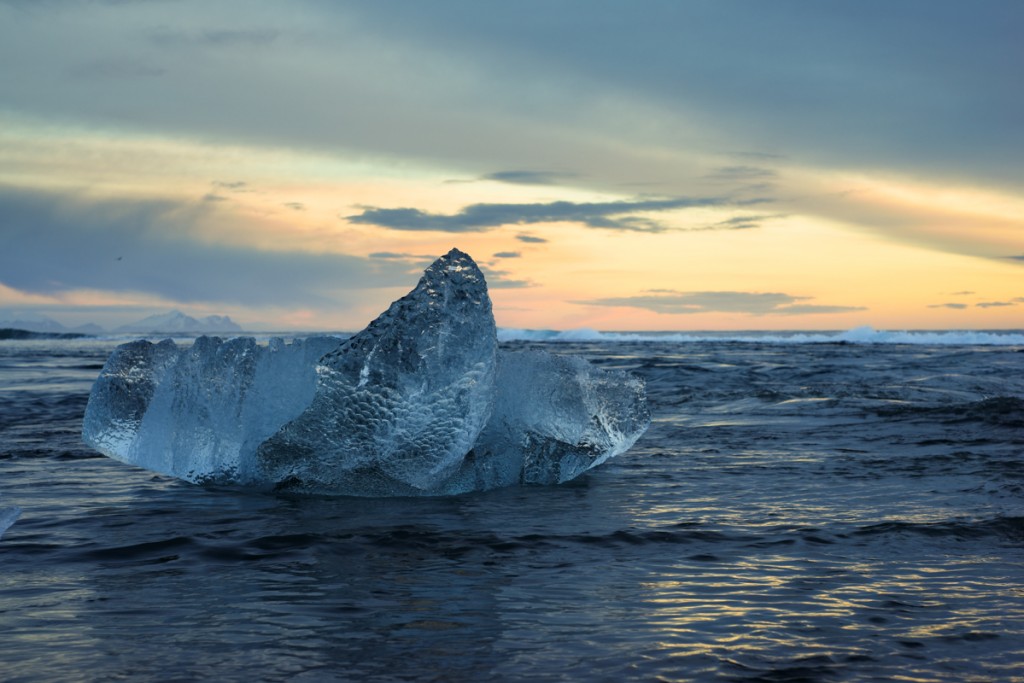 Then those that come back driven by waves and wind 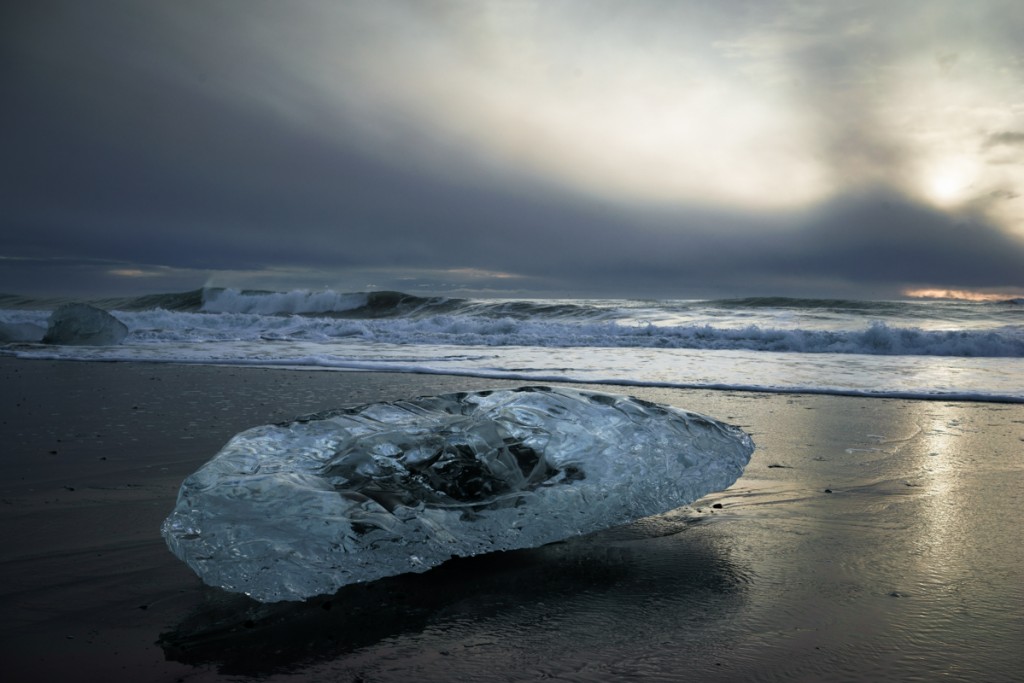 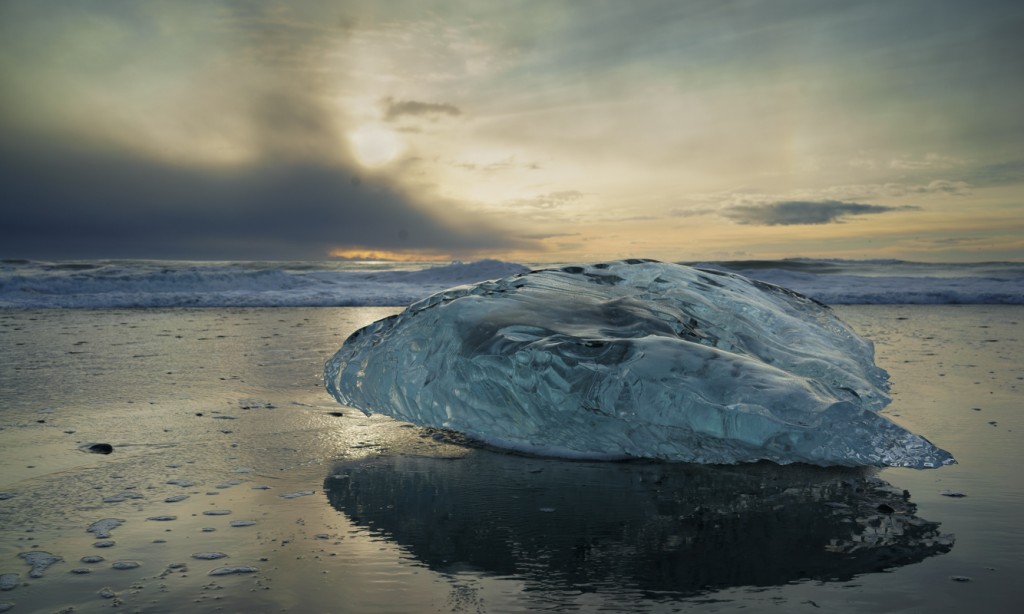 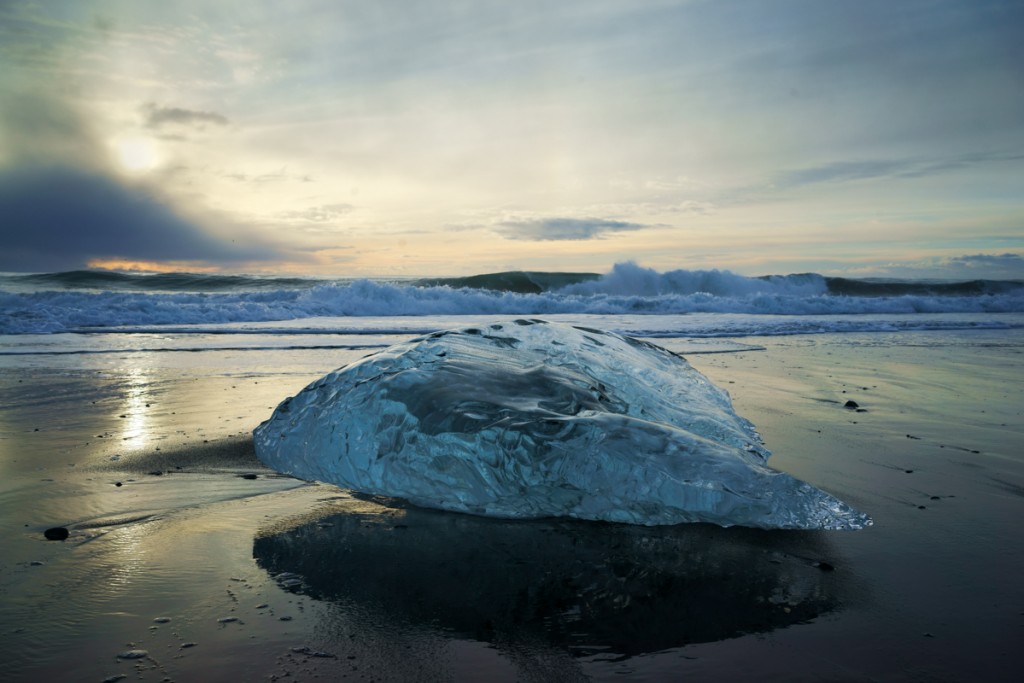 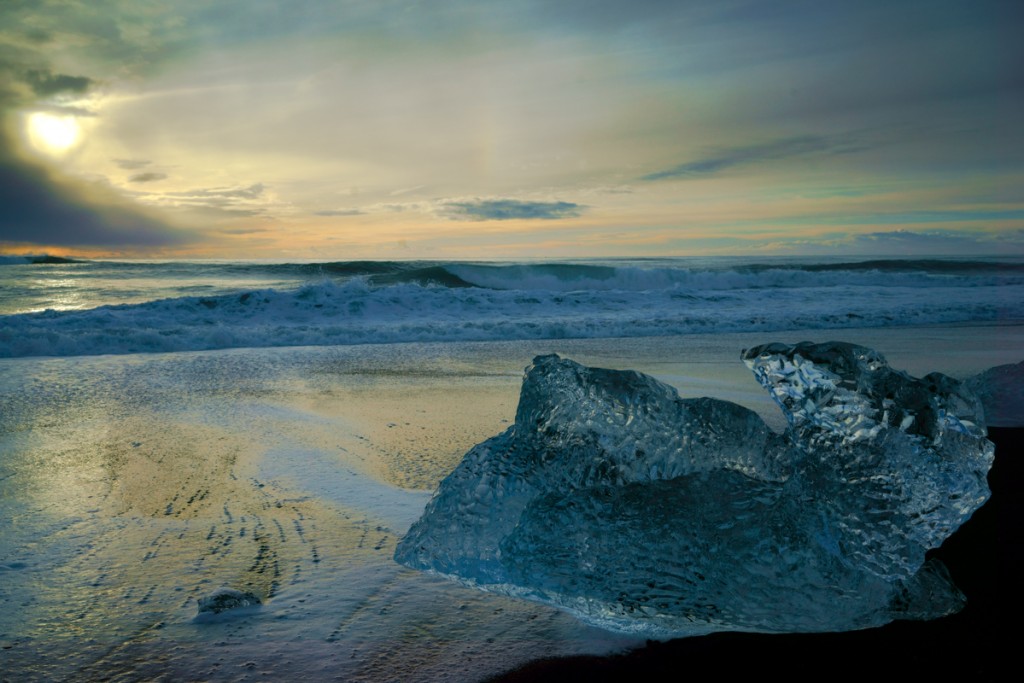 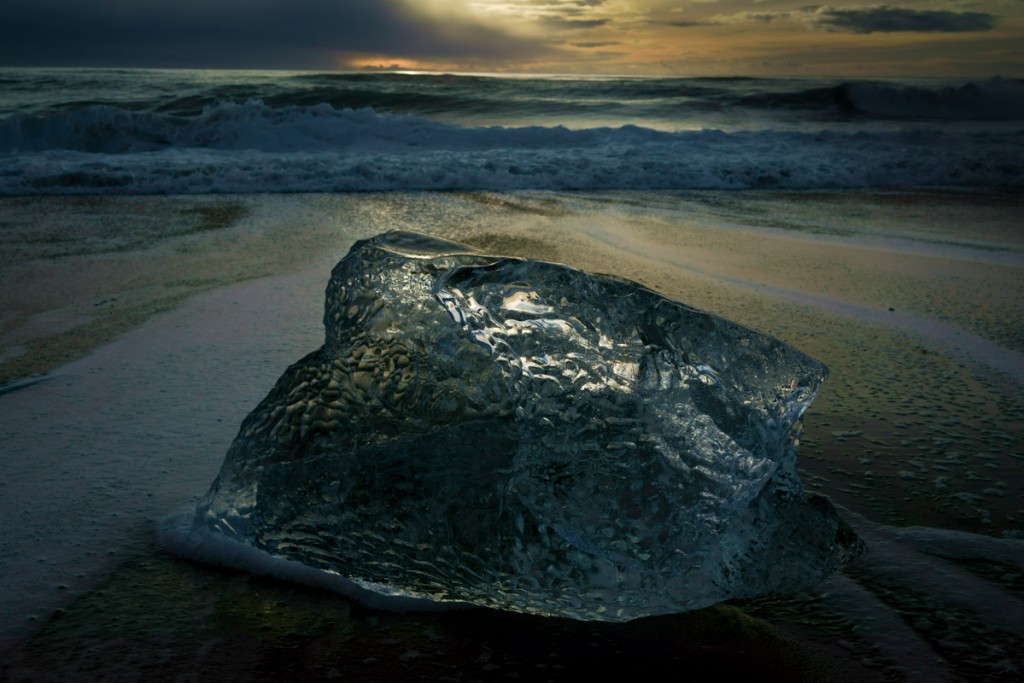 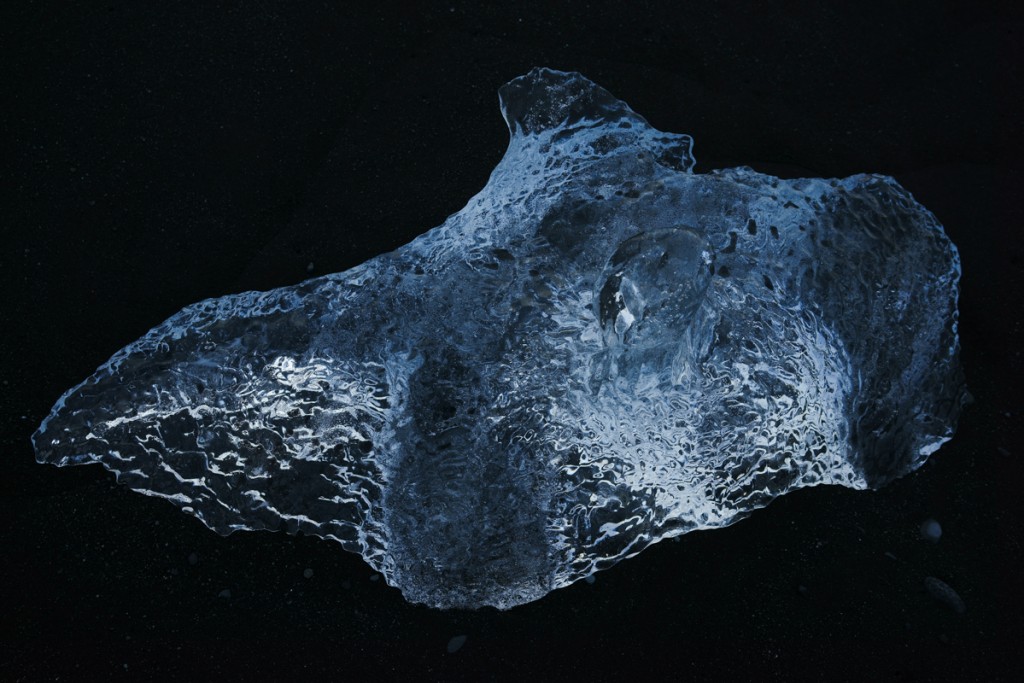 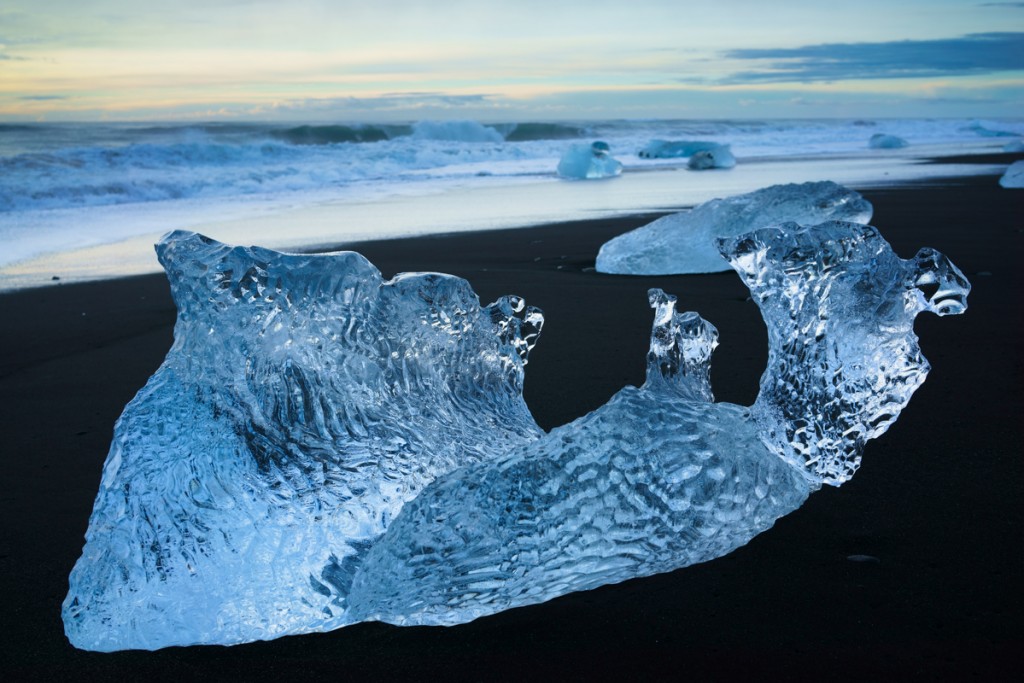 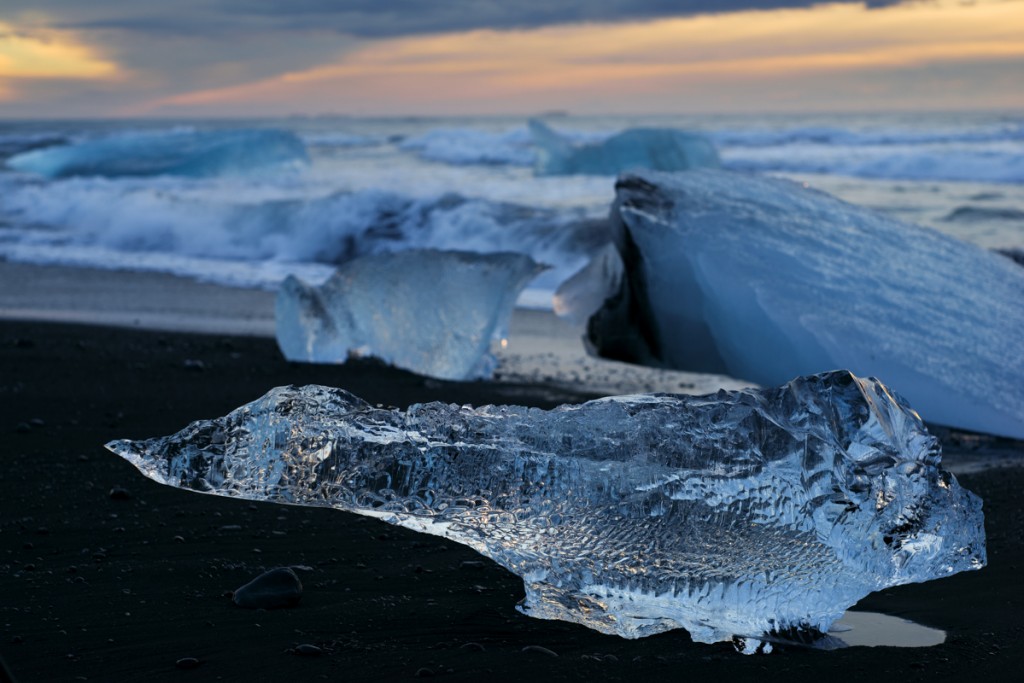 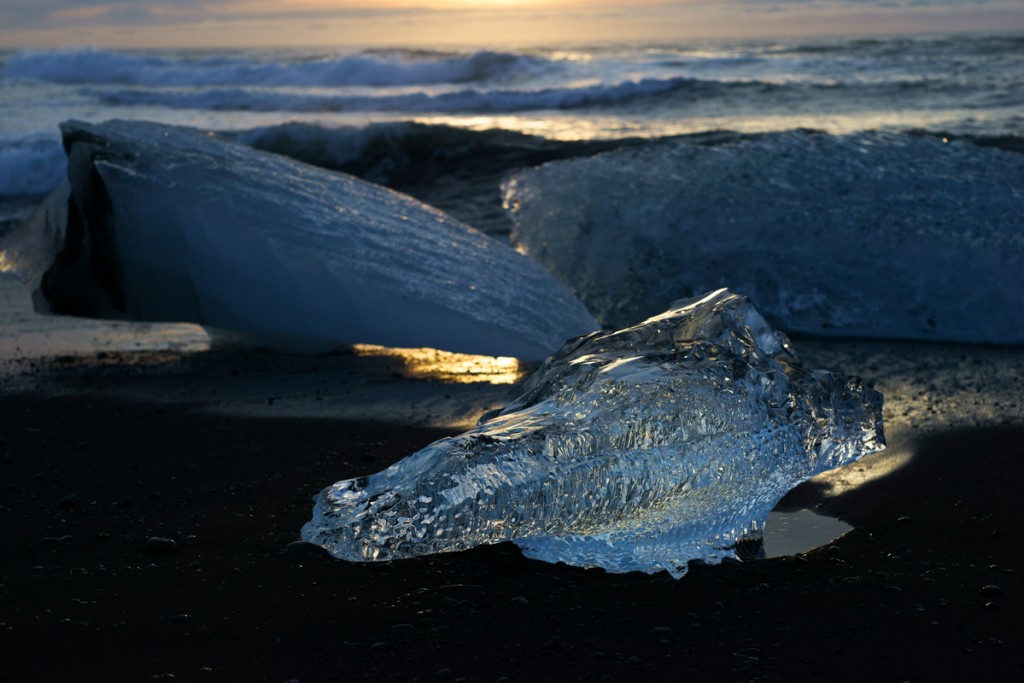 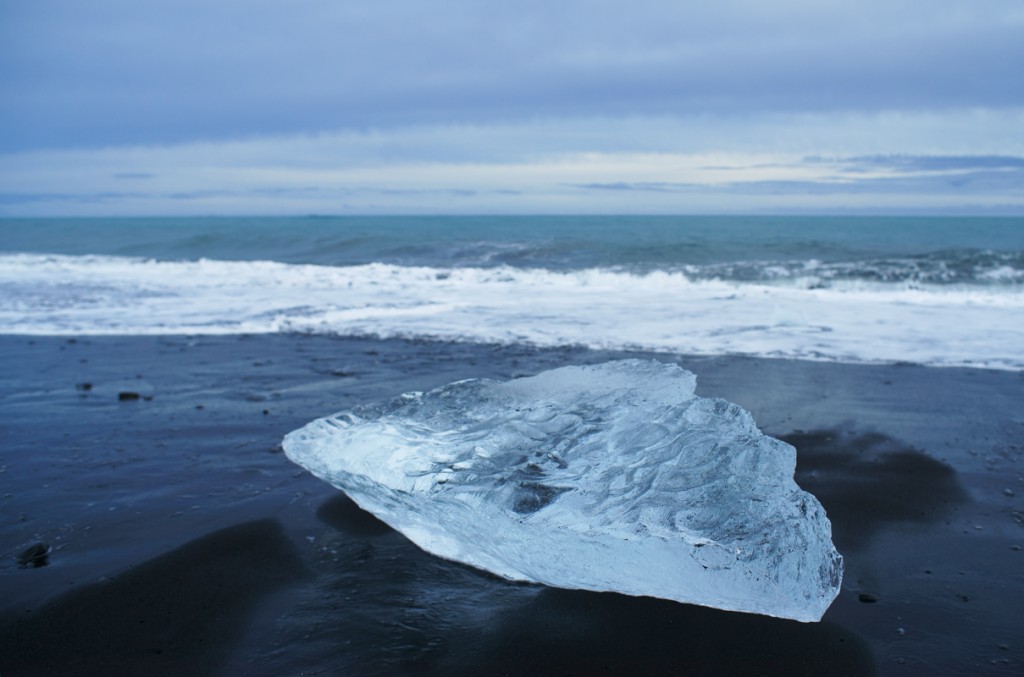 Ooops…. already 18 pictures, I am running away with myself, and this post is becoming too long. Time to say “see you with instalment n°2”