Here is the paradox: take the Sony NEX camera, arguably the one which is trickiest when it comes to designing good lenses to work with it because of its very short registry (distance from lensor to back of lens) relative to sensor size, and yet, it is the almost perfect, universal platform for lenses of all other brands!

How can this be? Actually, there is no mystery, only a range of adapters. Here is how it works: a lens and camera are designed around a given registry. If you try to adapt a lens on another camera where the registry is longer, it won’t, can’t work. But, if you want to adapt it on another camera with a shorter regstry, all you need to do is insert an adapter in between which is the correct length to restore the lens at the right distance from the sensor. Hence the fact that the camera with the shortest registry is the one on which the greatest selection of lenses can be mounted, i.e. the Sony NEX line.

Here is one such adapter, from Leica R to NEX . Notice how long it is. Which means those of you looking for a compact NEX system should look for rangefinder lenses rather than DSLR ones.

So, is it all bliss, and, if so, why are more camera manufacturers not competing for the shortest registry? There is a problem with short registries, and that is that light rays from wide angles lenses hit the sensor at an angle which increases as the registry shortens. That wasn’t a problem in film days, because film didn’t “object” to light hitting it at an angle, but today’s sensors do, and what you get is this: strong magenta colouring on the edges, called colour shift. Regular readers of DearSusans already know how to get rid of this, but it is neither nice, nor convenient.

But here is how it gets better: as you adapt lenses designed for longer registries, the adapter moves the lens away from the sensor, and the light no longer strikes the sensor at such an acute angle. Meaning that the colour shift problem goes away.

Which is why you can use any DSLR lens on a Sony NEX. However wide the lens, you will not get colour shift or corner smear, simply because the lens will be sitting far enough from the sensor to avoid the troublesome light rays even from very wide angle lenses. Of course, that it is a crop APS-C sensor means that full-frame lenses like Canon EF or Nikon FX also get help from the fact that the most objectionable part of the image, the corners and sides, are not included in the picture by the smaller sensor.

So now we know we can use adapters to provide diametre ajustment for M-mount lenses (Leica M, Zeiss ZM, Voigtländer), extra length adapters so that DSLR lenses can be used. Is that all? No, that is actually where the fun begins. Because who says adapters need to be passive? For example, rangefinder lenses do not do close focus, because rangefinder focusing systems can’t do it. So they commonly have a minimum focusing distance of 0.7m. No flower closeups for NEX with rangefinders, then? Wrong! Because that the camera can’t focus close doesn’t mean that the glass can’t. So clever people designed helicoid adapters that supply the extra adjustement range that the lens wasn’t given. And then, hey presto! close-ups with rangefinder lenses! One, with the Summilux 50, and one with the Elmar 24, both at roughly one quarter the minimum focusing distance they would bottom at without the helicoid adapter…

Now, is that all? No way, because adapter manufacturers have shown extraordinary creativity. Take, for example, the  now defunct Contax G range of film rangefinder cameras. Great Contax (Zeiss) glass: compact, high contrast, sharp as anything, you can get them for not too much money: around 250€. Problem, though, is that the system focused not with a focusing ring on the lens, like a Leica lens, but on the camera body, thanks to a mechanical drive arrangement. So how to focus on a NEX that does not have a focusing system? Simple: focus on the adapter, which includes a focusing ring.

Now that is as far as it can go, right? Wrong again! Because there are lenses that no longer have aperture rings either, like the newer Canon EF, the Nikon G, the Zeiss ZE and ZF.2. Aperture is electronically controlled from the camera, which, again, the NEX (or any other such camera), is obviously not designed to do.

Enter the electronic adapter. The first one to do this is Metabones, with the help of Canadian company Conurus. They now produce an EF to NEX lens adapter that will emulate everything that is done electronically between lens and camera.

Everything electronic now includes: aperture, autofocus (beware, this is the NEX AF system at work, much less fast than the Canon DSLR one), even in-lens stabilizer…. Wow!

This is the most amazing, the most advanced adapter, one of the most expensive as well at some 400$ (there are cheaper copycats, if you see what I mean). Actually not for long, because Hawk’s, the originator of the first helicoid for Contax G now promise for the year-end an electronic adapter for said G lenses. Autofocus, no less! And, I understand, it will incorporate a helicoid design as well. Boy, close-up shots with the so-sharp-you-can-shave-with-it G 45 should be quite something…

But yet other adapters are even more fun. The ones I am talking about take advantage of the image circle of a FF lens being larger than what an APS-C sensor uses. And what do they do with it: they give you either tilt, or shift. Imagine, a Summilux tilt or shift lens on your NEX . How wild is that? Particularly shfit, which is used to straighten verticals in a picture whereone would otherwise have leaning lines, a phenomenon known as “keystoning”. 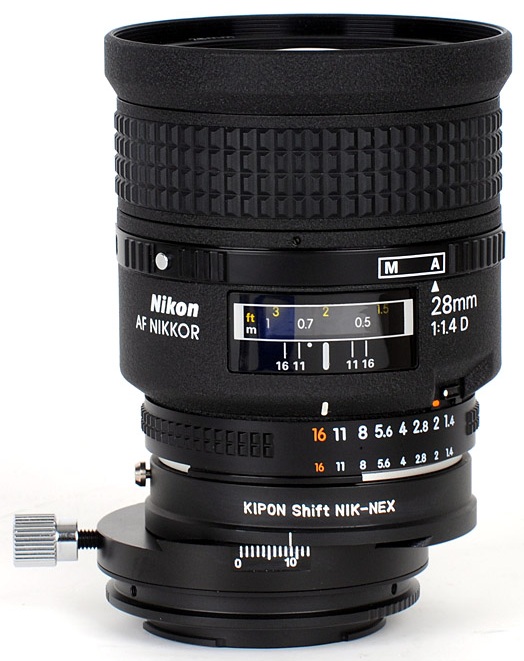 So there, you have it all. One final word of warning before you go out a buy a bag ful of clever adapters. Prices vary, for the garden-variety M to E-mount, from 10$ Chinese adapter off E-Bay to 120€ for the German luxo Fotodiox. I am not saying that the cheaper is no good, that because its thickness is not correct you won’t reach infinity focus, though this has been a common occurrence. Just, if you buy the cheapest ones, don’t expect Rolls-Royce quality at Tata Nano prices….